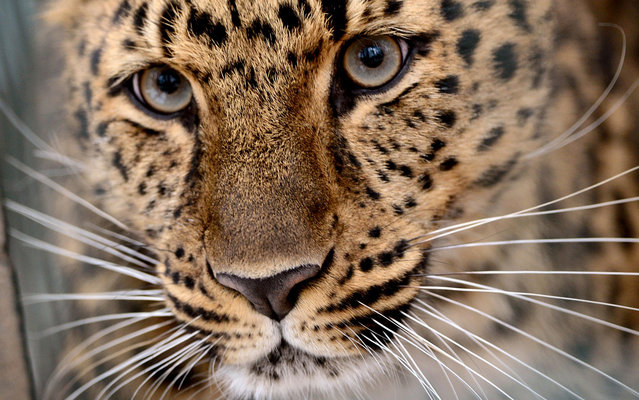 Amur leopard Xembalo looks through the bars of its enclosure at the Zoo in Leipzig, Germany, Wednesday April 3, 2013. (Photo by Hendrik Schmidt/AFP Photo/Dpa) 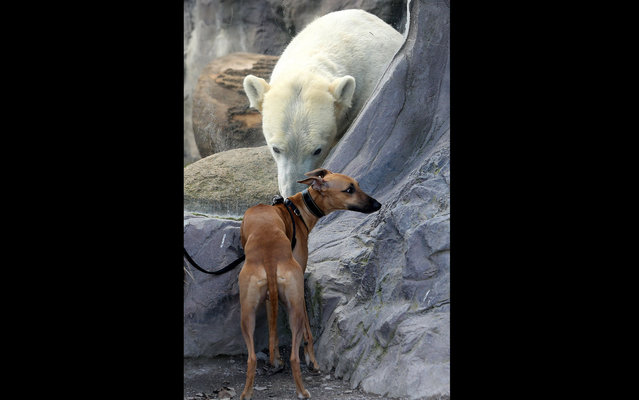 Polar Bear sees a dog that approaches the glass of his enclosure at the zoo in Gelsenkirchen, Germany, on April 2, 2013. The dog seems to fear the encounter. (Photo by Roland Weihrauch/AFP Photo/Dpa) 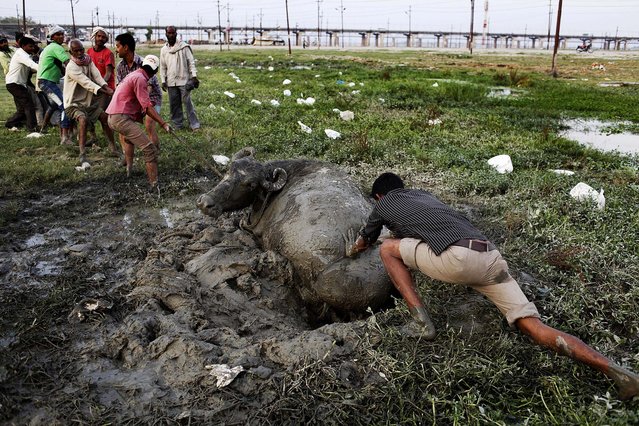 People try to rescue a buffalo which was trapped in mud in Allahabad, India, on April 2, 2013. (Photo by Rajesh Kumar Singh/Associated Press) 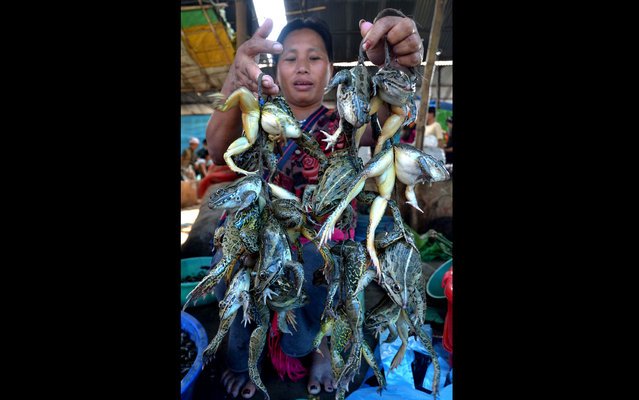 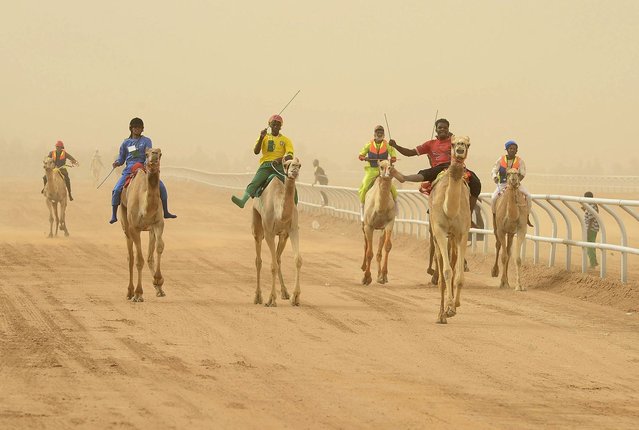 Jockeys race to the finish line during the 20km camel race at the opening of the Janadriya festival near Riyadh, Saudi Arabia, on April 3, 2013. (Photo by Faisal Al Nasser/Reuters) 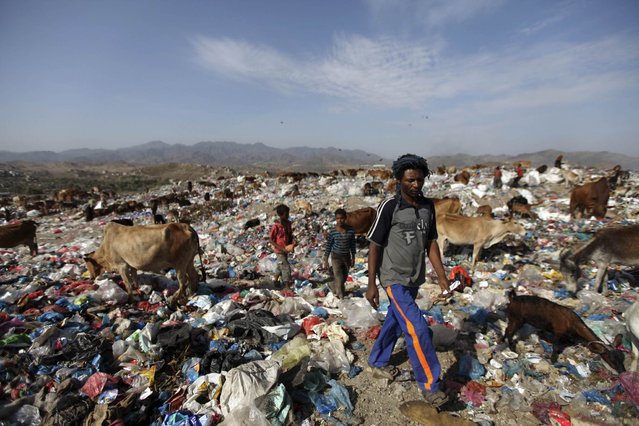 A man walks at a garbage disposal site near the southern Yemeni province of Taiz March 31, 2013. (Photo by Mohamed al-Sayaghi/Reuters) 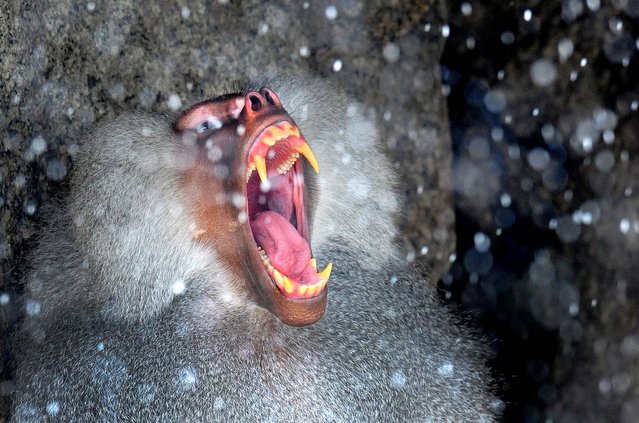 A baboon yawns during a snowfall in the Hellabrunn Zoo in Munich, Germany, on March 31, 2013. (Photo by Andreas Gebert/Dpa) 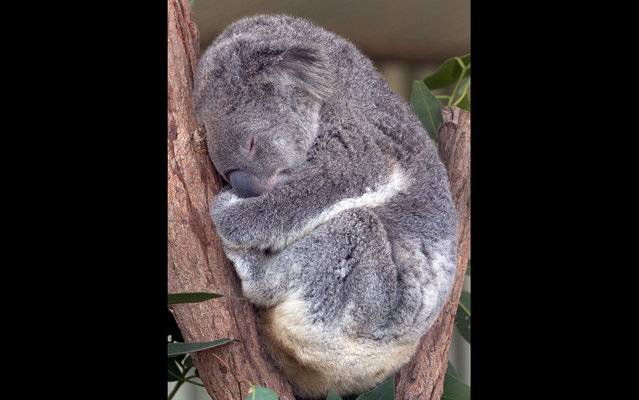 Sleeping coala at the Zoo in Sydney, Australia, on April 2, 2013. (Photo by Saeed Khan/AFP Photo) 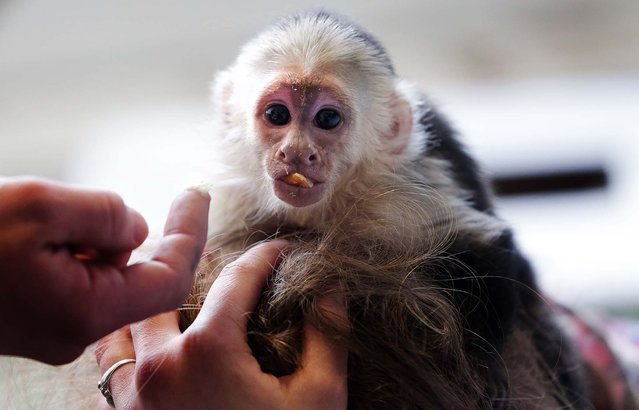 Capuchin monkey “Mally” sits on the head of an employee in an animal shelter in Munich, Germany, on April 2, 2013. Justin Bieber had to leave the monkey last Thursday in quarantine after arriving in Munich without the necessary documents for the animal. (Photo by Matthias Schrader/Associated Press) 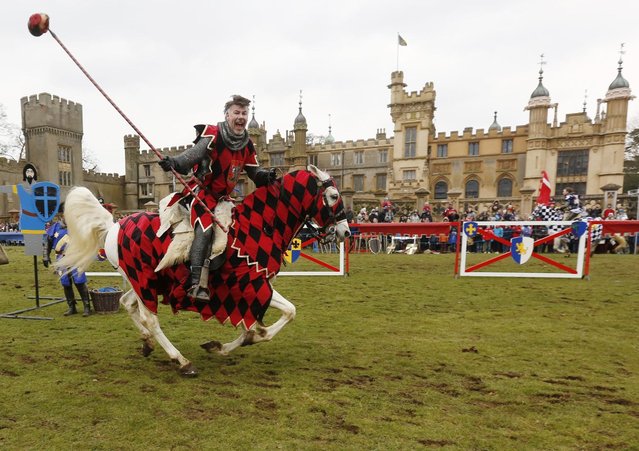 A performer dressed as a medievel knight shows off jousting skills at Knebworth House in Hertfordshire, UK, April 1, 2013. Knebworth House, a stately home of the Lytton family since 1490, hosted The Knights Of Royal England in their first medievel jousting tournament of the season. (Photo by Olivia Harris/Reuters) 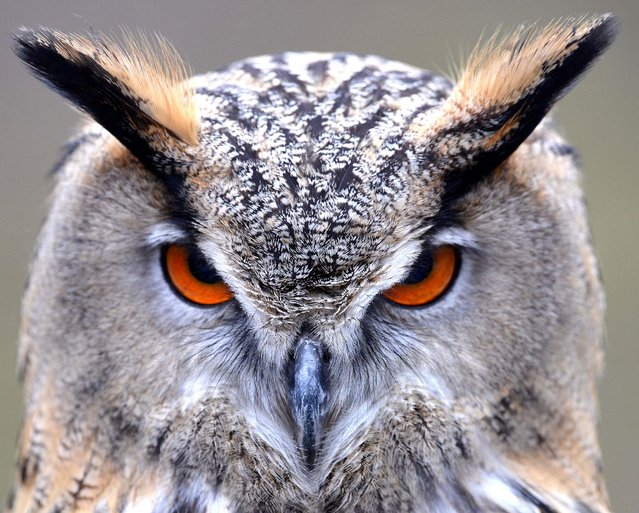 An Eurasian Eagle Owl sits in its enclosure in Munich's Hellabrunn Zoo, on April 3, 2013. (Photo by Frank Leonhardt/Dpa) 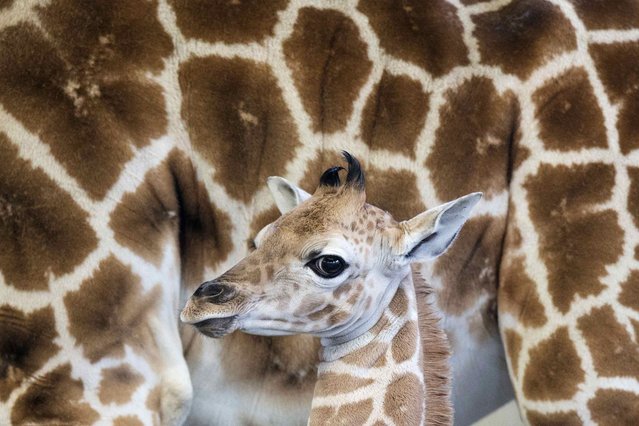 A female Rothschild giraffe, named Sandy Hope, stands next to it's mother at the LEO Zoological Conservation Center in Greenwich, Connecticut April 2, 2013. The endangered subspecies was born on March 22 at the private preserve and breeding ground for wild animals. The giraffe was named Sandy Hope in remembrance of the shooting at Sandy Hook Elementary School that took the lives of 20 students and six staff members. (Photo by Adrees Latif/Reuters) 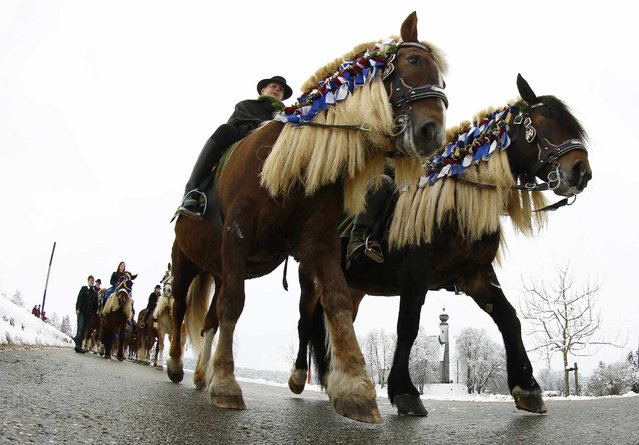 Pilgrims dressed in traditional Bavarian clothes attend the traditional Georgi horse riding procession on Easter Monday in the southern Bavarian town of Traunstein April 1, 2013. Since the early 16th century, farmers have taken part in the pilgrimage to bless their horses. This tradition, the “Georgiritt”, goes back to the legend of Saint George, the horsemen's patron saint. (Photo by Michaela Rehle/Reuters) 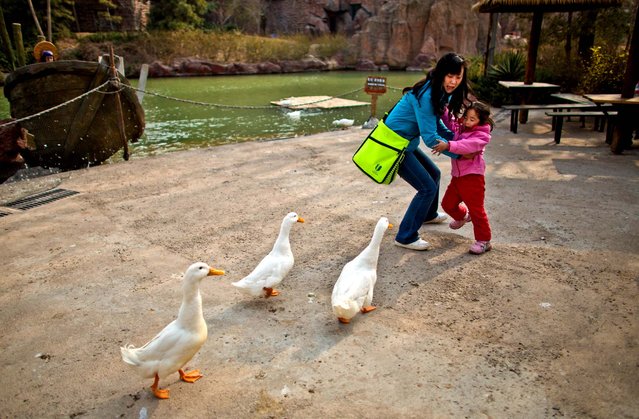 A woman and her daughter are frightened while ducks approach closely for food at an amusement park in Beijing, China, Wednesday, April 3, 2013. Scientists taking a first look at the genetics of the bird flu strain that recently killed two men in China said Wednesday the virus could be harder to track than its better-known cousin H5N1 because it might be able to spread silently among poultry without notice. The bird virus also seems to have adapted to be able to be able to sicken mammals like pigs. (Photo by Alexander F. Yuan/AP Photo) 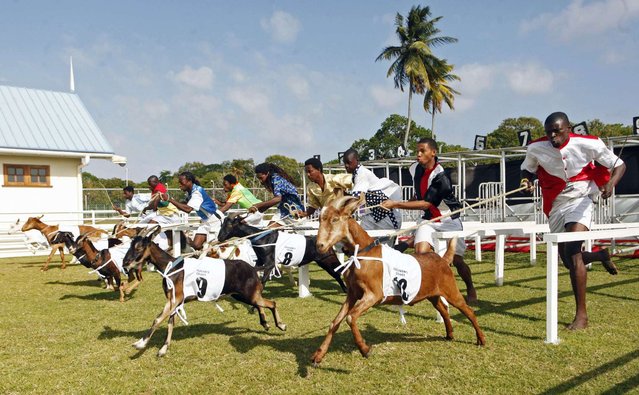 Goat handlers, known as jockeys, race to the finish line with their animals in one of several events held during the annual Buccoo Goat and Crab Race Festival at Buccoo Integrated Facility on Tobago Island, April 2, 2013. The event is part of the island's annual Easter celebration. (Photo by Andrea De Silva/Reuters) 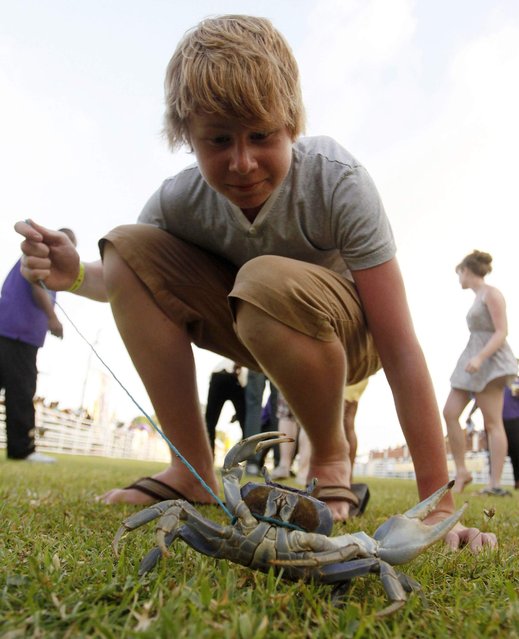 Adam Best of Britain waits for the start of the annual crab race, one of several events held during the annual Buccoo Goat and Crab Race Festival at Buccoo Integrated Facility on Tobago Island, April 2, 2013. The event is part of the island's annual Easter celebration. Picture taken April 2, 2013. (Photo by Andrea De Silva/Reuters) 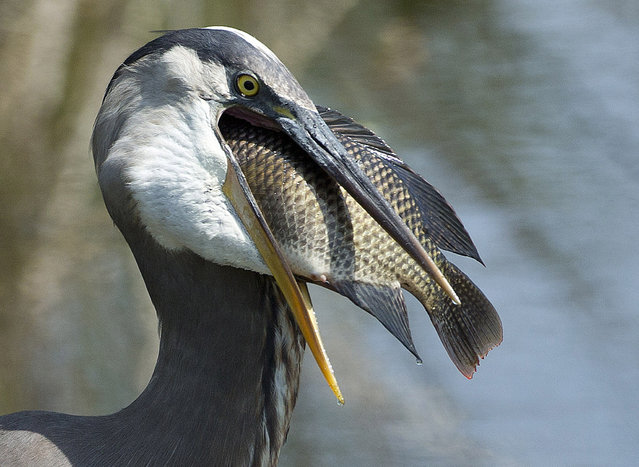 A Great Blue Heron prepares to swallow a fish at a wetland preserve near Delray Beach, Fla., Tuesday, April 2, 2013. Wakodahatchee Wetlands is a bird-watcher's paradise where, for the past three months, it's been nesting and baby season. Wakodahatchee, an oasis of wildlife in suburbia, means “created waters” in the Seminole Indian language. (Photo by J. Pat Carter/AP Photo) 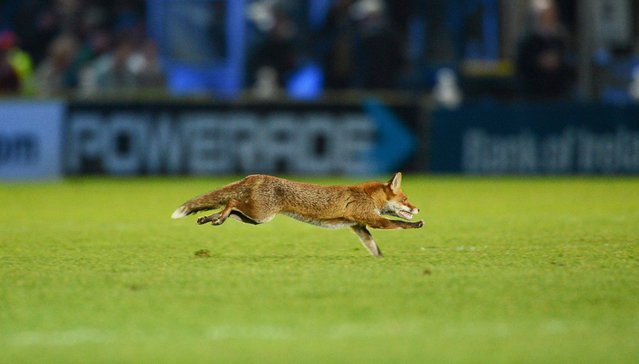 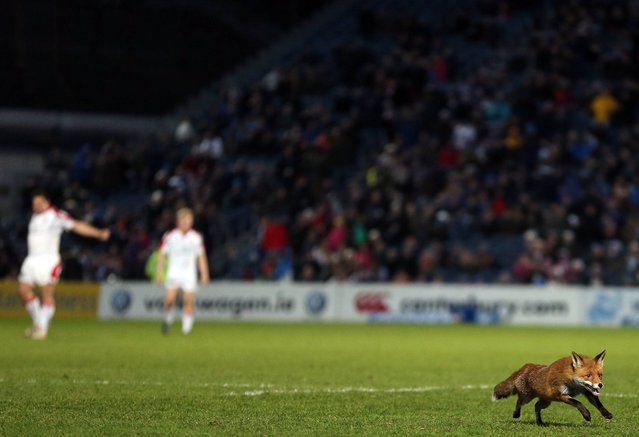 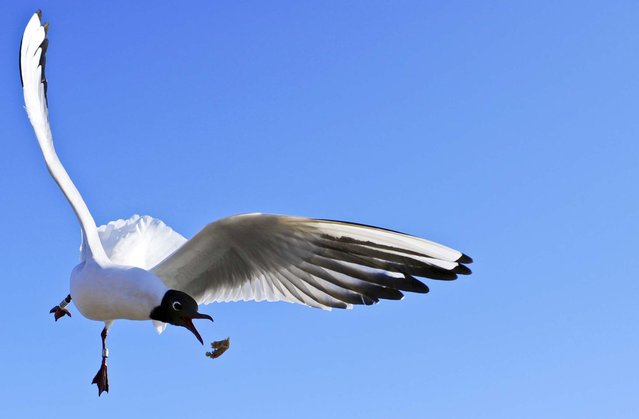 A seagull snatches a piece of bread in the German Baltic Sea port of Travemuende, on March 31, 2013. (Photo by Spata Ole/Dpa) 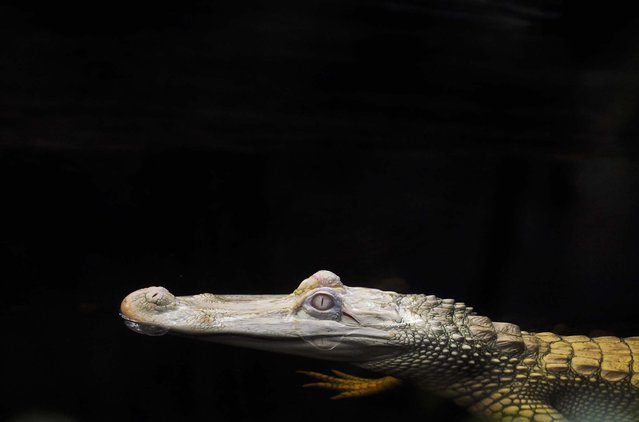 Luna, the albino alligator, swims at the NC Aquarium at Fort Fisher in Wilmington, N.C., on April 2, 2013. (Photo by Mike Spencer/Star-News) 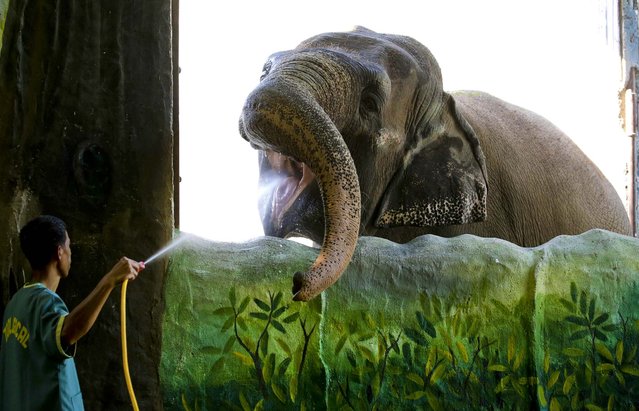 A Zoo worker sprays water into the mouth of a 38-year-old female elephant named Mali at the Manila Zoo in the Philippines, on April 4, 2013. (Photo by Aaron Favila/Associated Press) 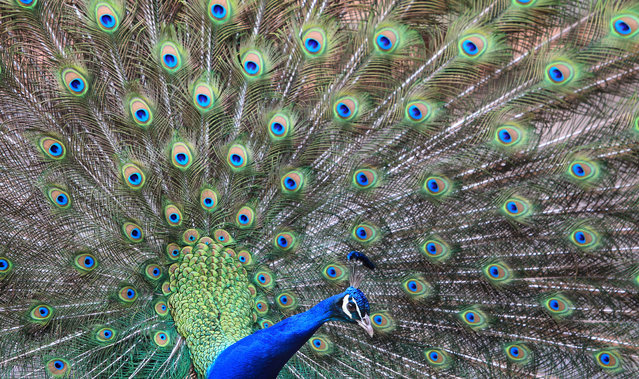 A peacock displays his feathers in a park Geiselwind, southern Germany on April 3, 2013. (Photo by Karl-Josef Hildenbrand/AFP Photo) 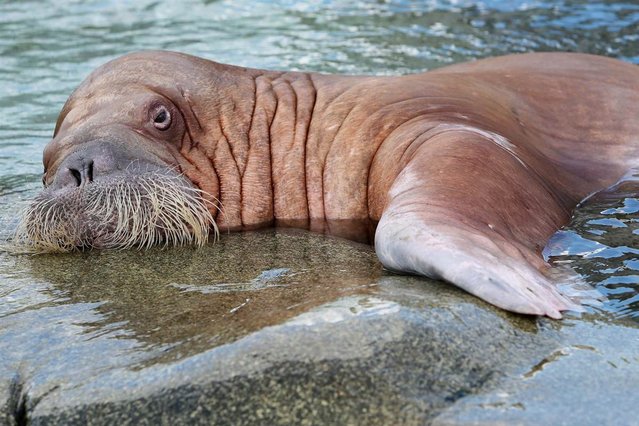 Female walrus Dyana swims in the Polar Sea enclosure at the Hagenbeck Zoo in Hamburg, Germany, on March 31, 2013. (Photo by Christian Charisius/AP Photo) 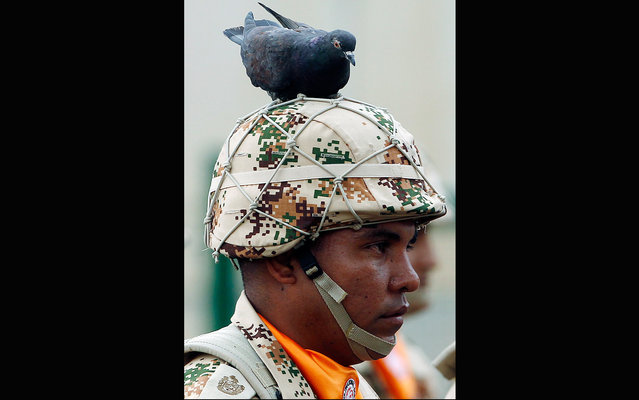 A pigeon sits on the helmet of a soldier during the farewell ceremony for Colombian troops that will serve at the Multinational Force and Observers (MCO), the international peacekeeping force that oversees the terms of the peace treaty between Egypt and Israel, in Bogota, Colombia, Wednesday, April 3, 2013. (Photo by Fernando Vergara/AP Photo) 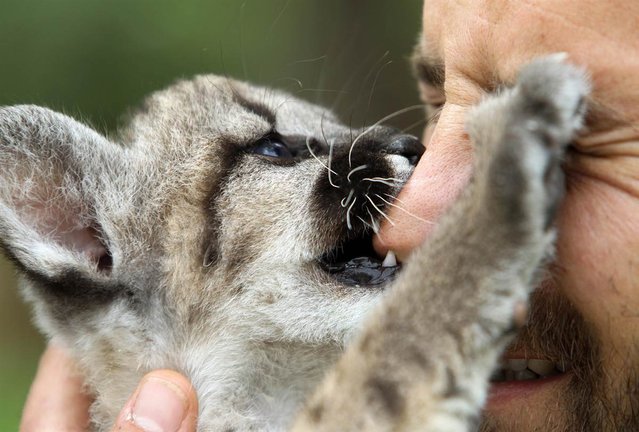 Valentina, a 2-month-old puma cub, bites the nose of a keeper at the Attica Zoological Park in Athens on April 2, 2013. (Photo by Thanassis Stavrakis/AP Photo) 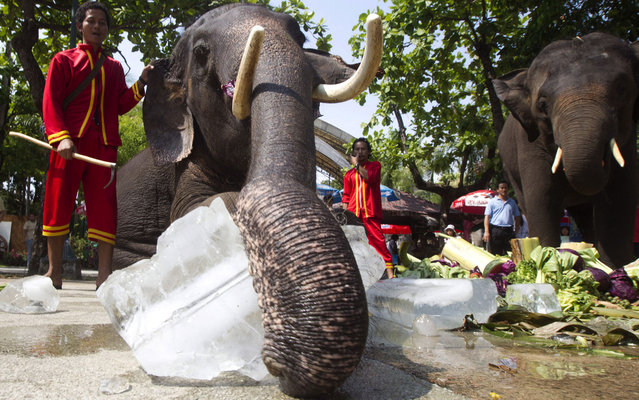 An elephant plays with a block of ice given to beat the heat at Dusit Zoo in Bangkok, Thailand, on April 2, 2013. The weather turns warmer in Thailand as the country enters its summer season. (Photo by Sakchai Lalit/AP Photo) 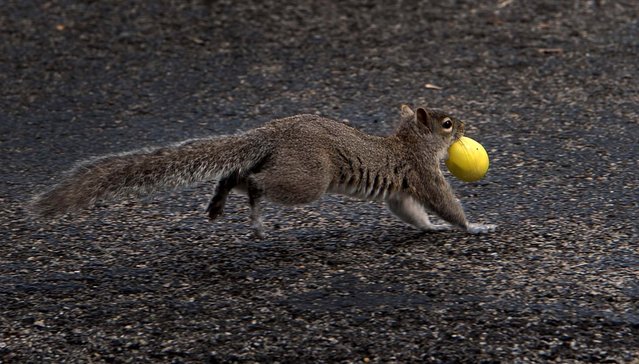 A squirrel runs away with an Easter egg during an egg hunt at the First General Baptist Church in Owensboro, Kentucky, on March 30, 2013. (Photo by Gary Emord-Netzley/The Messenger-Inquirer) 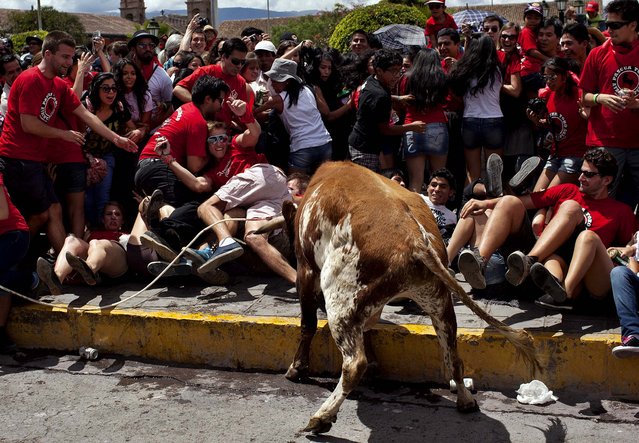 Revelers move away to avoid being tossed by a bull during the “Jala Toro” or “Pull the Bear” celebration in downtown Ayacucho, Peru, Saturday, March 30, 2013. The Jala Toro is a “running of the bulls” celebration, similar to Spain's Encierro, where bulls are let loose and revelers run around them, except that in Ayacucho's Holy Week, they are led by horsemen called “Morocuchos”, the cowboys of the Peruvian Andes. (Photo by AP Photo/Rodrigo Abd)
Edit Del
06 Apr 2013 12:52:00, post received 0 comments
Publication archive:
←   →
Popular tags:
All tags
Last searches: