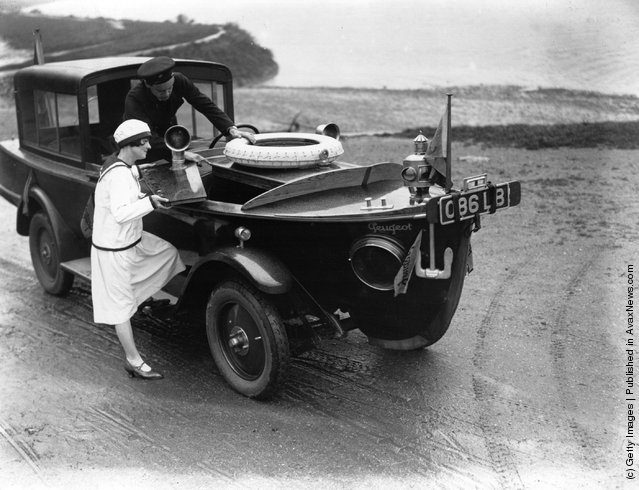 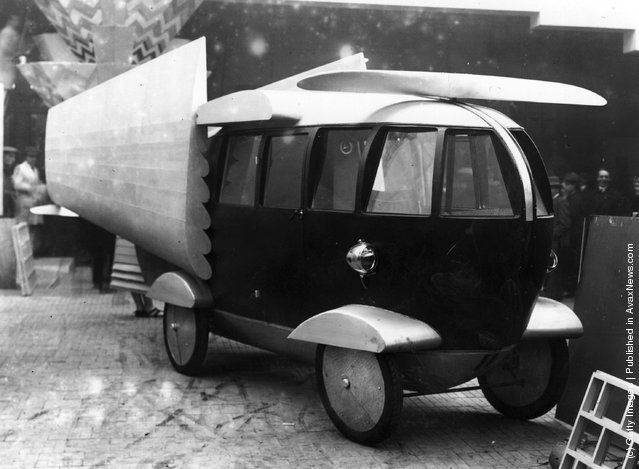 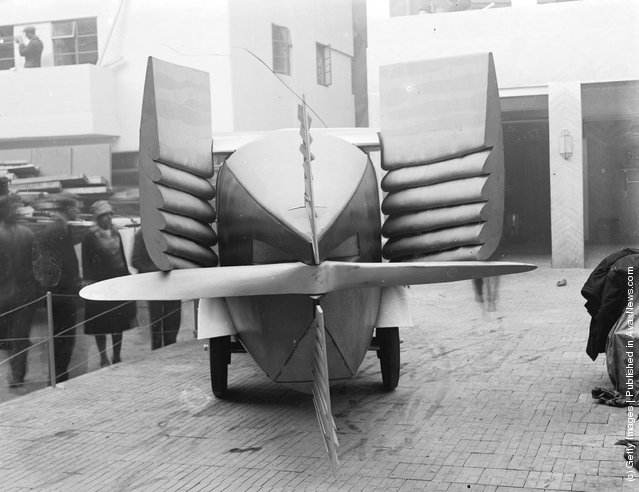 Back views of an English invention capable of being used as a car, boat and plane. Showing are a tail fin, rudder and propeller. It also has two wings which can fold back and another propeller at the front. (Photo by London Express/Getty Images). 27th February 1928 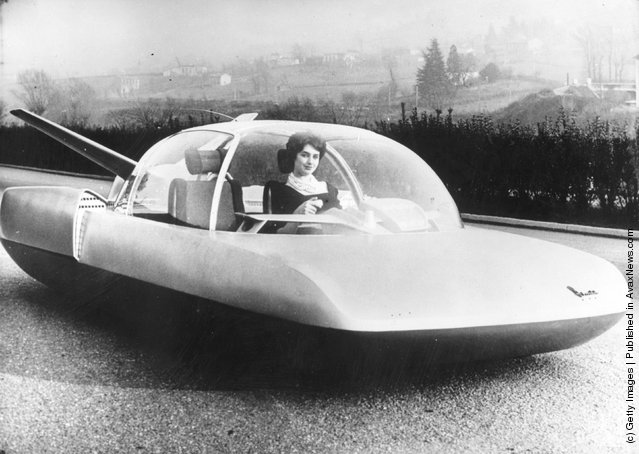 A Fulgar show-model car made by French car manufacturers, Simca. Designed for the year 2000 it is intended to be atomically powered, guided by radar and using only two wheels balanced by gyroscopes when driven at over 150 kph. (Photo by Central Press/Getty Images). 1958 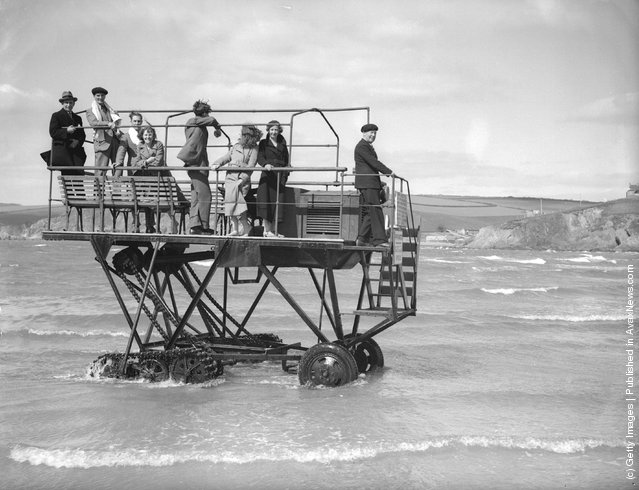 A caterpillar driven ferry with a 24 horsepower engine takes holidaymakers from the mainland at Bigbury in Devon to Burgh Island, a quarter of a mile away. (Photo by Reg Speller/Fox Photos/Getty Images). 4th April 1935 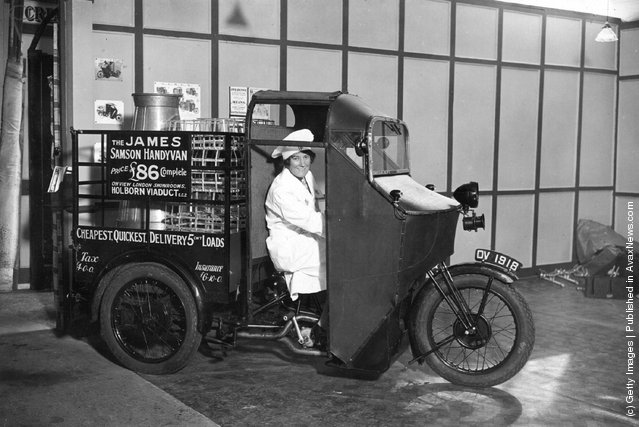 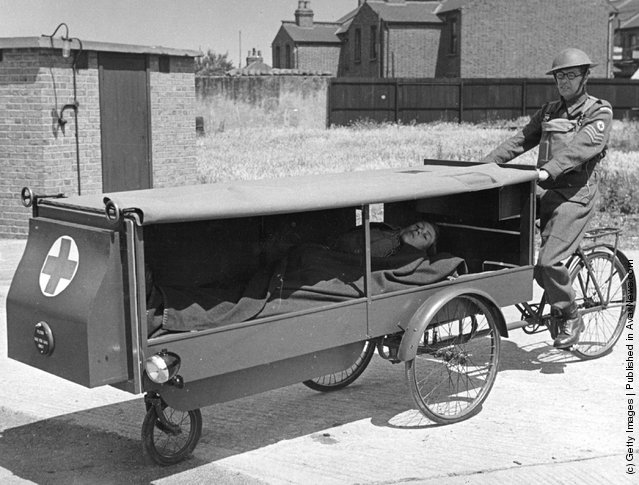 A one-man anti-gas ambulance and resuscitator, designed and made for use by the Home Guard. (Photo by Fox Photos/Getty Images). 29th July 1941 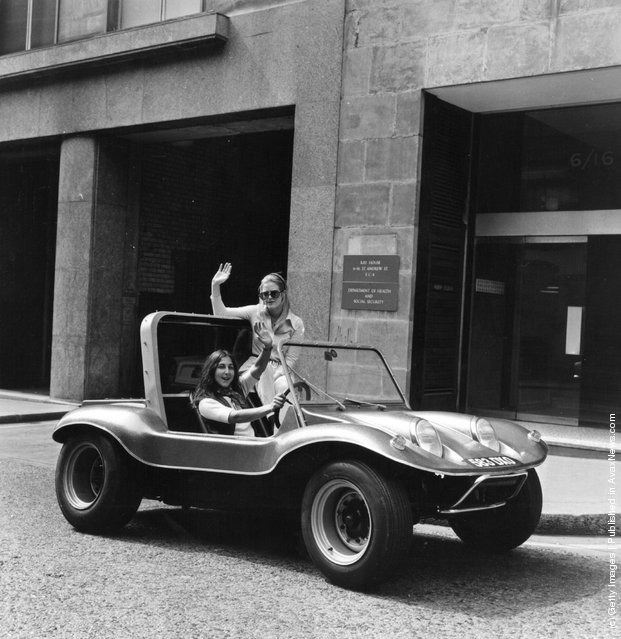 A fun vehicle for the young at heart, The Bugle Buggy, a fibre glass bodyshell mounted on a Volkswagen chassis and engine. (Photo by Fred Mott/Evening Standard/Getty Images). 5th August 1970 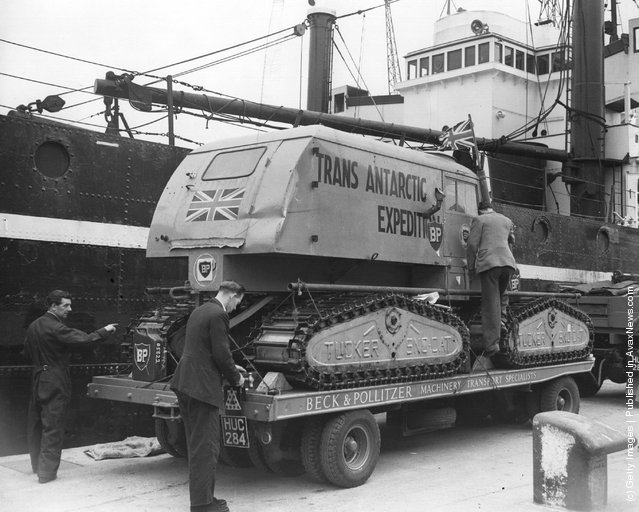 “Haywire”, one of the snowcats used by Dr. Fuch's and his Commonwealth explorers on their journey across the Antarctic continent, arrives at Tilbury from New Zealand, via Antwerp. (Photo by Central Press/Getty Images). 10th May 1958 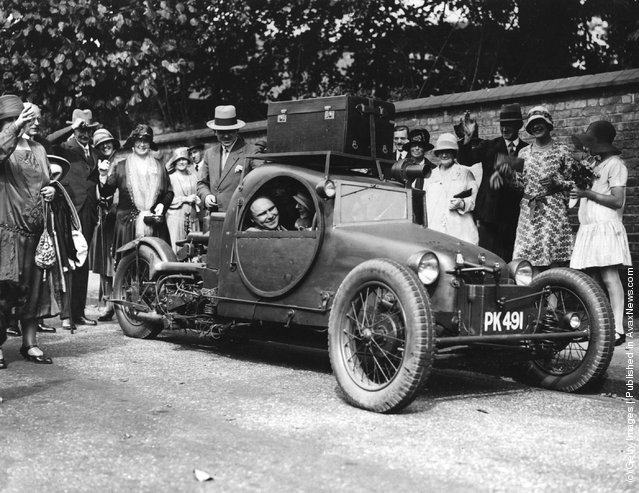 Mr. Graham's novel three-wheel car designed to look like an armoured car, being used to take himself and his bride on honeymoon after their wedding. (Photo by Fox Photos/Getty Images). August 1931 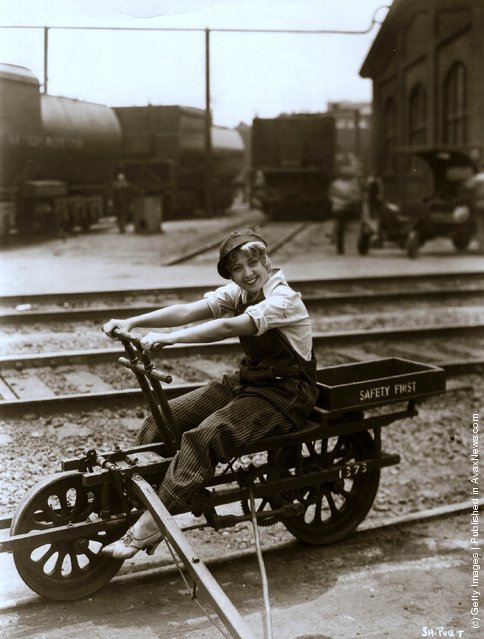 Joan Blondell (1909–1979) the friendly comedienne is riding on an American railway truck, during the filming of her latest film, “Other Men's Women”, directed by William Wellman for Warner Brothers. (Photo by Hulton Archive/Getty Images). Circa 1931 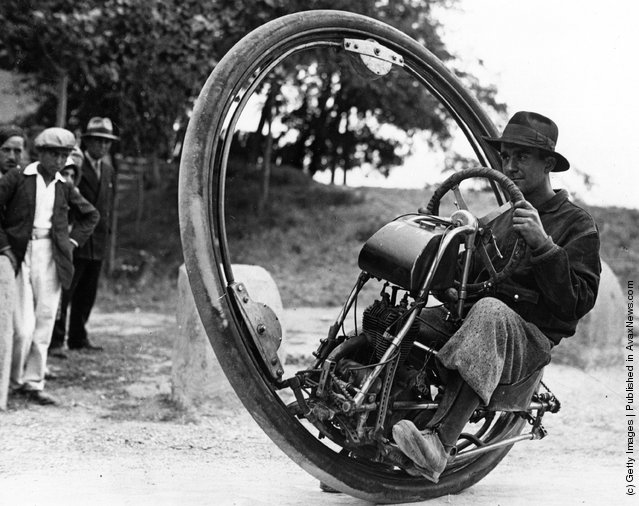 Swiss engineer M. Gerder at Arles, France on his way to Spain in his “Motorwheel”, a motorcycle with a wheel which runs on a rail placed inside a solid rubber tyre. (Photo by Fox Photos/Getty Images). 1st September 1931 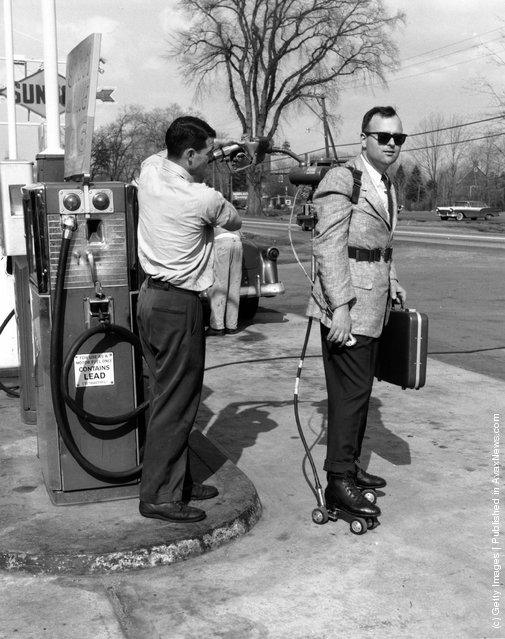 Salesman Mike Dreschler has his motorised roller skates refuelled at a petrol station near Hartford, Connecticut. He has a single horsepower air-cooled engine strapped to his back and holds a clutch, accelerator and engine cut-off switch in his hand. (Photo by F. Roy Kemp/BIPs/Getty Images). 11th May 1961 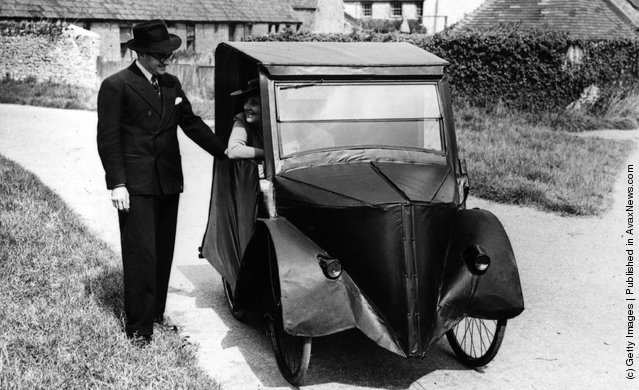 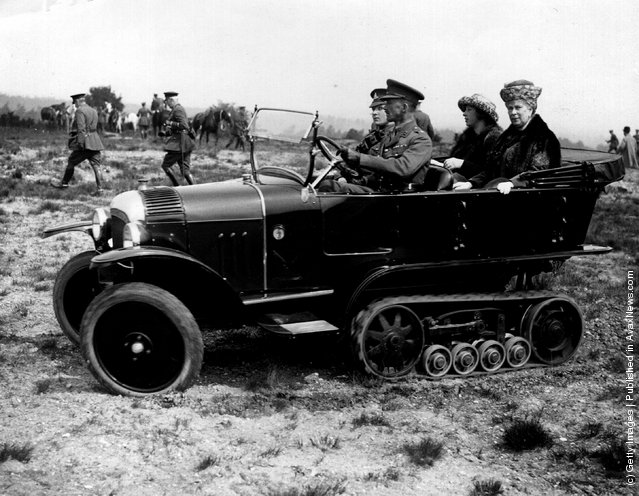 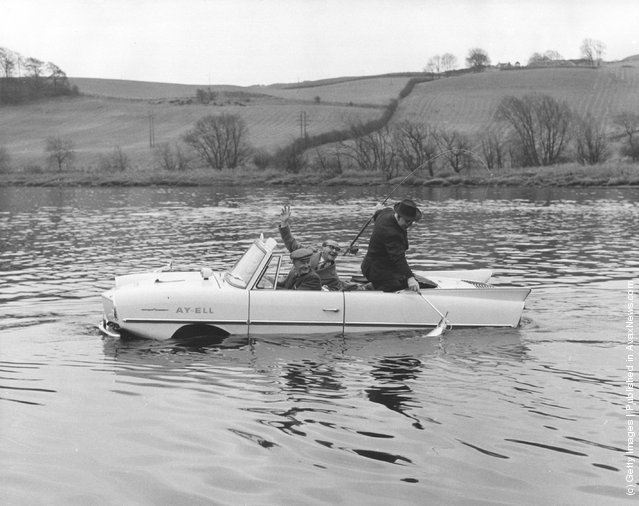 The new Amphicar, which can be driven on land or water, is used as a fishing boat by its owner at the start of the salmon fishing season on the River Tay, Scotland. The “aqua” car is German built, fitted with a Triumph Herald engine and can reach speeds of 7.5 knots in water. (Photo by Fox Photos/Getty Images). 17th January 1964 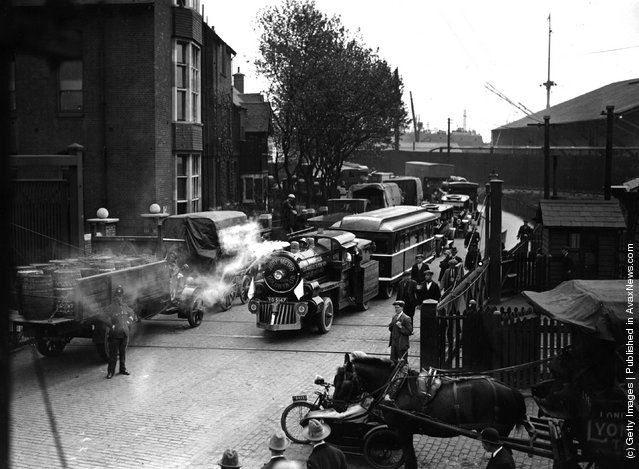 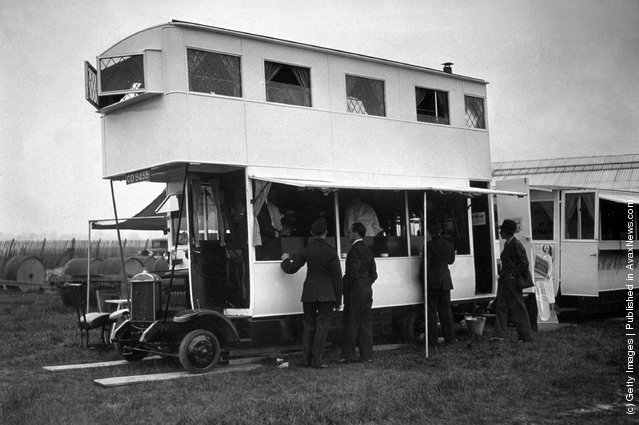 Customers buying snacks at the bar of a bus. (Photo by Topical Press Agency/Getty Images). Circa 1933 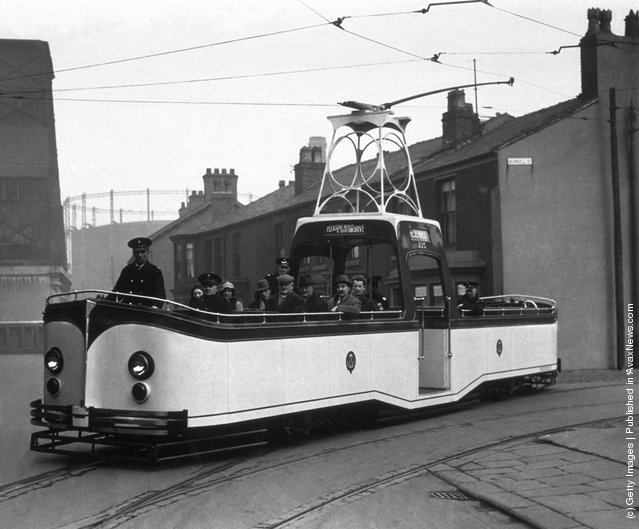 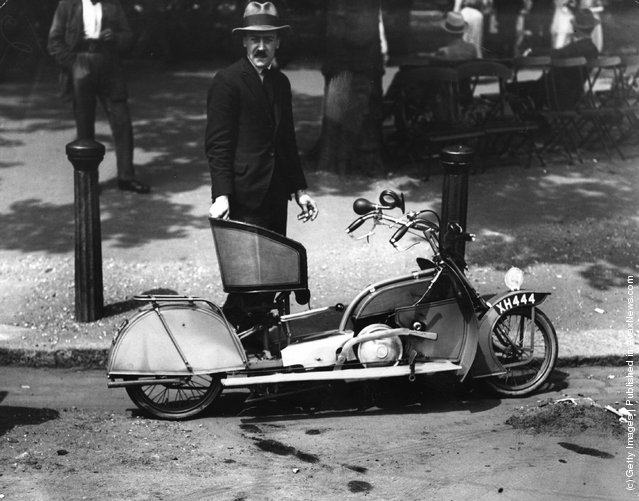 A man with his small, runaround cycle. (Photo by Hulton Archive/Getty Images). Circa 1921 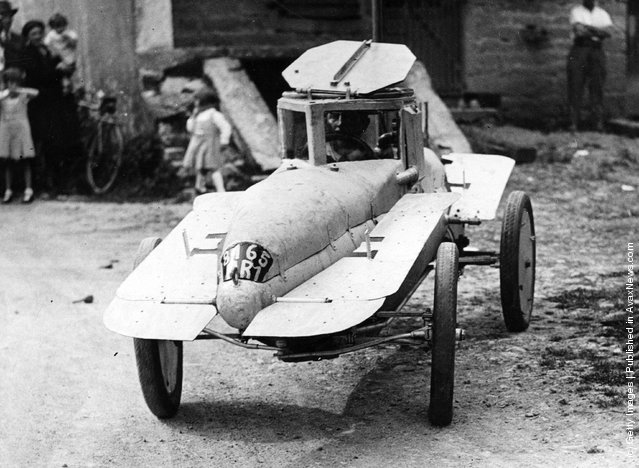 A submarine motor car, which can travel both on land and underwater and is equipped with a 4 hp engine and steel fins on both sides. (Photo by Horace Abrahams/Fox Photos/Getty Images). 1st December 1937 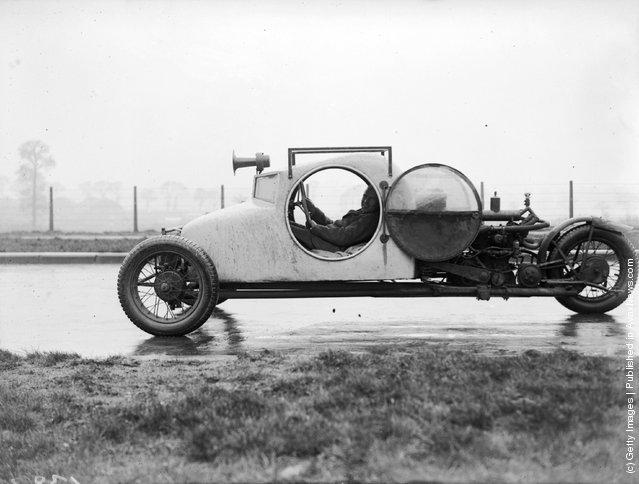 A three-wheeled car made by Mr. A. Graham of Kingston, Surrey. The vehicle, designed in a nautical style, reaches a maximum speed of 70 miles an hour with a body made entirely of sheet iron. (Photo by Fox Photos/Getty Images). April 1929 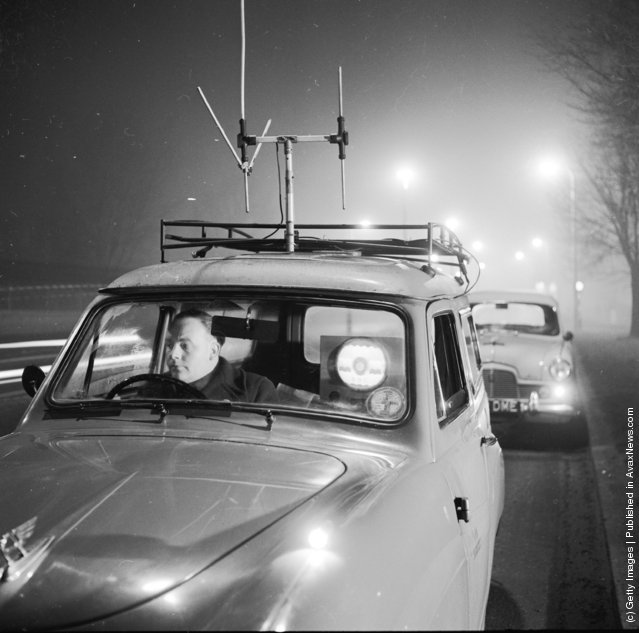 Arthur Parkes, a television engineer from Dudley in Worcestershire, is the proud holder of the first mobile television licence to be issued in Britain. Mr. Parkes has confounded the British Broadcasting Corporation by proving that aircraft are capable of receiving television transmissions. (Photo by Harry Kerr/BIPs/Getty Images). December 1955 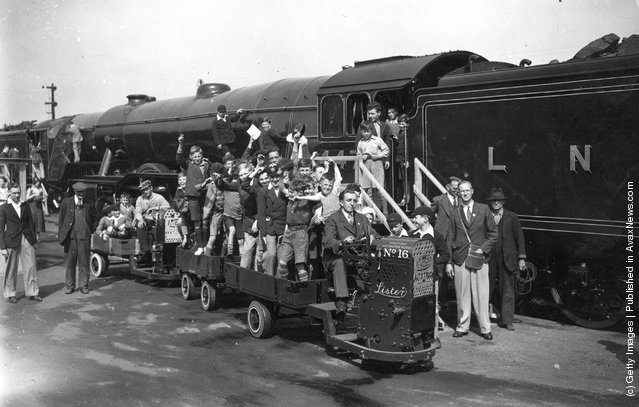 A miniature truck carrying a party of children in open carriages next to a London and North Eastern railway steam engine on a platform at Ilford railway station, Essex. (Photo by Douglas Miller/Topical Press Agency/Getty Images). 2nd June 1934 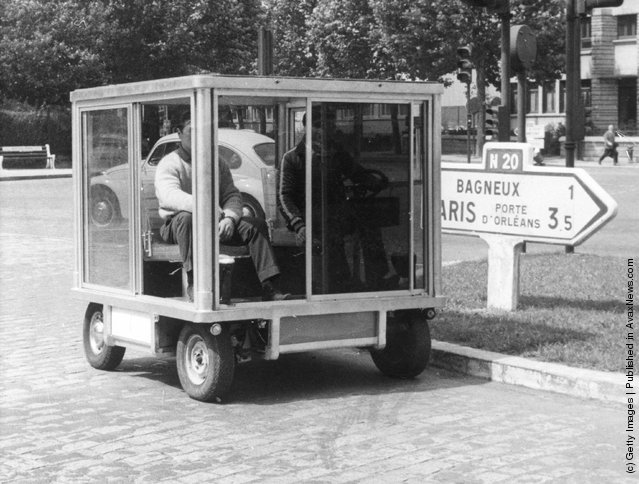