Touching Wombats
“Wombats are Australian marsupials; they are short-legged, muscular quadrupeds, approximately 1 metre (39 in) in length with a short, stubby tail. They are adaptable in their habitat tolerances, and are found in forested, mountainous, and heathland areas of south-eastern Australia, including Tasmania, as well as an isolated patch of about 300 ha in Epping Forest National Park in central Queensland.

The name wombat comes from the aborigines that originally inhabited the Sydney area. Wombats were often called badgers by early settlers because of their size and habit. Because of this, localities such as Badger Creek, Victoria and Badger Corner, Tasmania were named after the wombat.

Wombats dig extensive burrow systems with rodent-like front teeth and powerful claws. One distinctive adaptation of wombats is their backwards pouch. The advantage of a backwards-facing pouch is that when digging, the wombat does not gather dirt in its pouch over its young. Although mainly crepuscular and nocturnal, wombats also venture out to feed on cool or overcast days.

Wombats have an extraordinarily slow metabolism, taking around 8-14 days to complete digestion, which aids their survival in arid conditions. They generally move slowly, and because of this are known for taking shortcuts. When threatened, however, they can reach up to 40 km/h (25 mph) and maintain that speed for up to 90 seconds.

Dingos and Tasmanian Devils prey on wombats. The wombat's primary defence is its toughened rear hide with most of the posterior made of cartilage. This, combined with its lack of a meaningful tail, makes it difficult for any predator that follows the wombat into its tunnel to bite and injure its target. When attacked, wombats dive into a nearby tunnel, using their rump to block a pursuing attacker. Wombats may allow an intruder to force its head over their back and then use their powerful legs to crush the skull of the predator against the roof of the tunnel, or drive it off with two-legged “donkey” kicks.

Humans who accidentally find themselves in an affray with a wombat may find it best to scale a tree until the animal calms and leaves. Humans can receive puncture wounds from wombat claws as well as bites. Startled wombats can also charge humans and bowl them over, with the attendant risks of broken bones from the fall. One naturalist, Harry Frauca, once received a bite 2 cm (0.79 in) deep into the flesh of his leg—through a rubber boot, trousers and thick woollen socks (Underhill, 1993)”. – Wikipedia 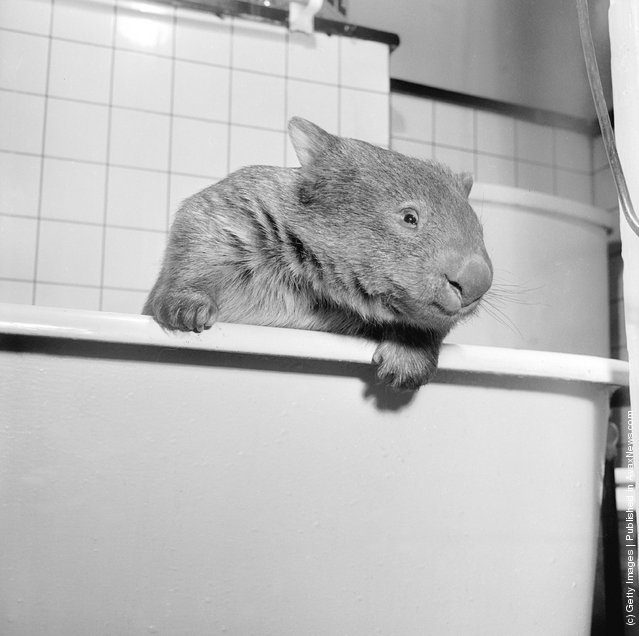 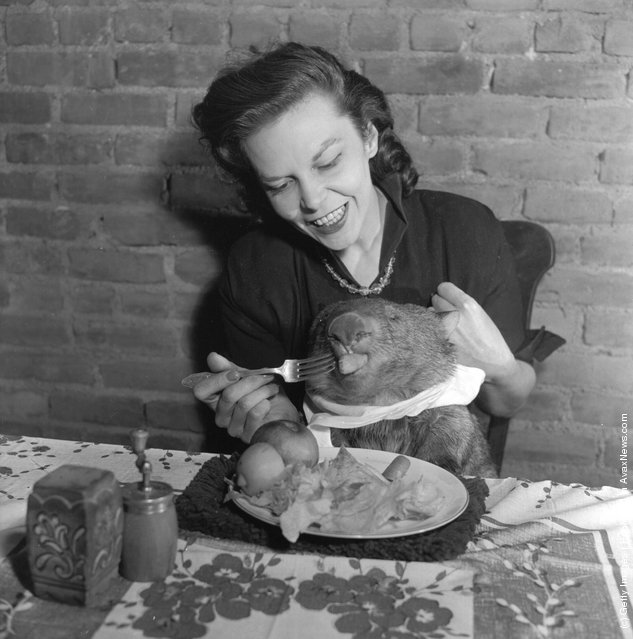 A young wombat named Wimpie having a meal on the lap of his trainer who runs a firm supplying animals for TV shows. He is the first wombat ever to make a video. (Photo by Orlando /Three Lions/Getty Images). Circa 1950 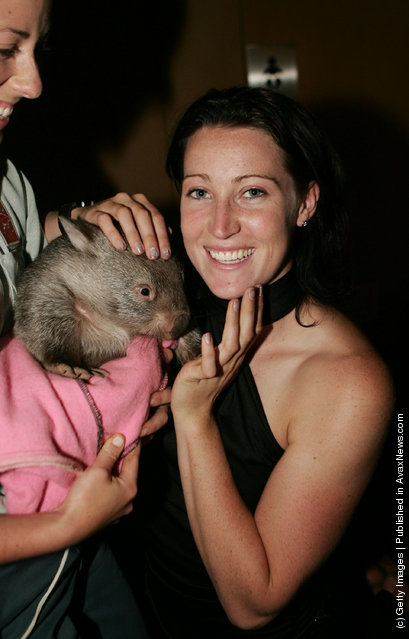 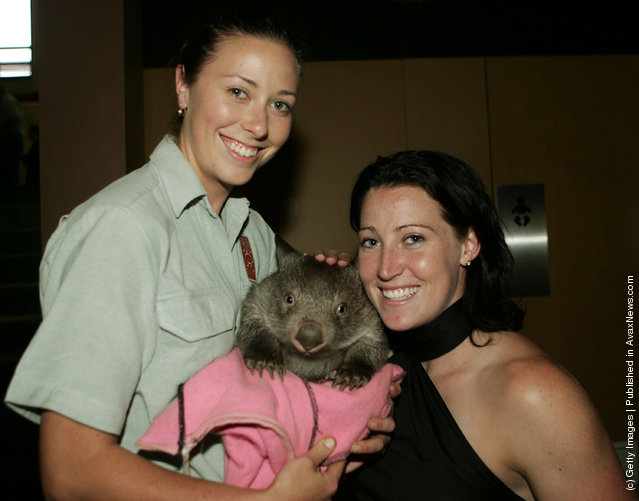 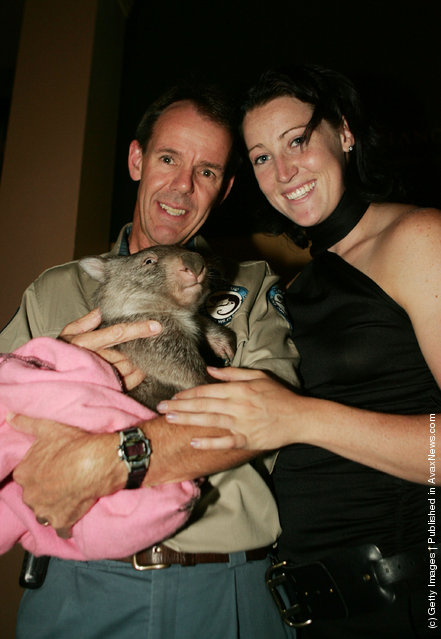 Athlete Jana Pittman (R) and zoologist Dr. Alan Horsup (L) pose with a wombat during a fundraising event to save the Northern Hairy-nosed Wombat at the Australian Museum November 17, 2004 in Sydney, Australia. (Photo by Patrick Riviere/Getty Images) 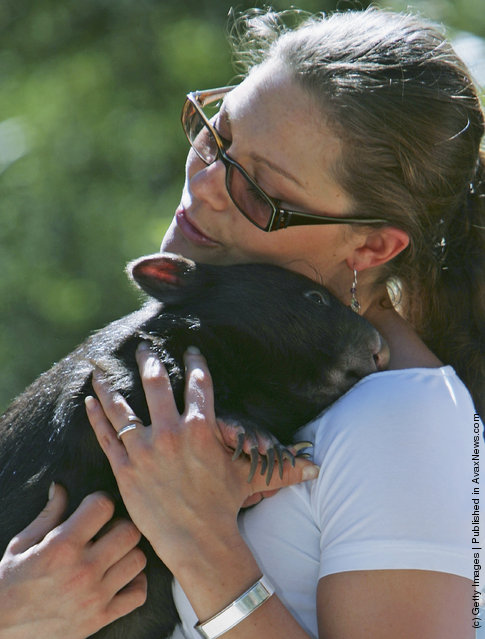 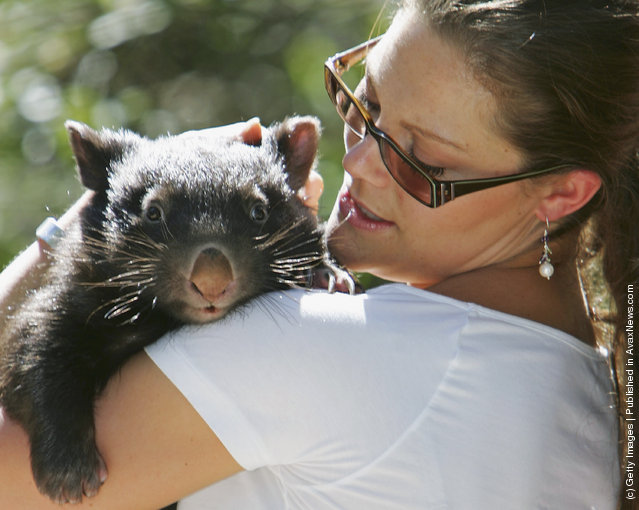 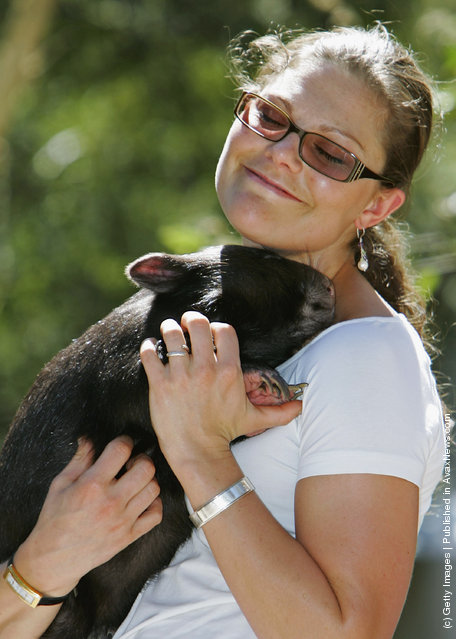 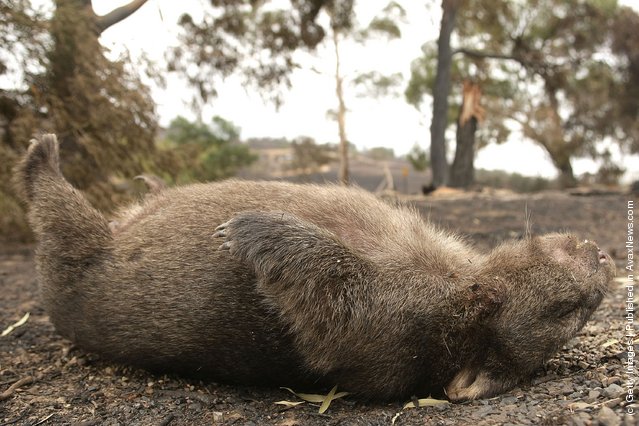 A dead wombat lies in a paddock in the aftermath of a bushfire which continues to blaze across Victoria at Steels Creek on February 11, 2009 in Steels Creek, Australia. (Photo by Lucas Dawson/Getty Images) 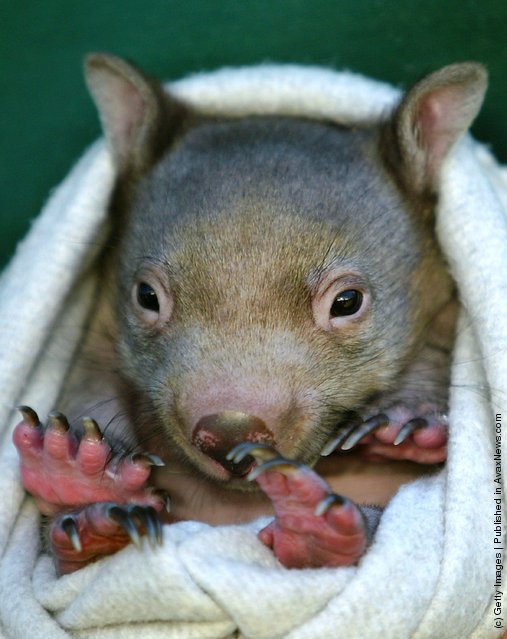 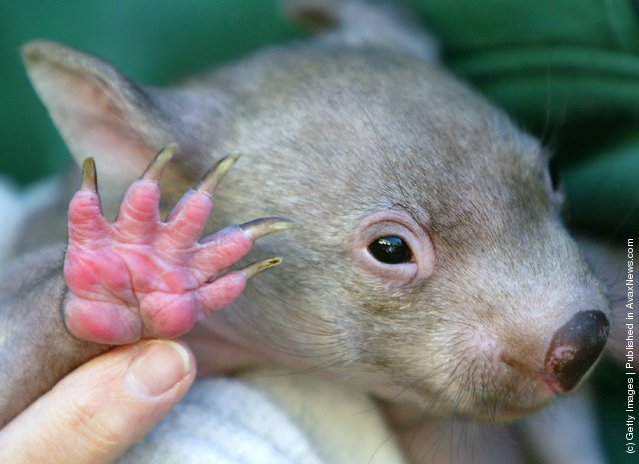 “Abdul”, a baby Common Wombat, is one of the marsupials on show during the spring baby boom at Taronga Zoo September 1, 2005 in Sydney, Australia. “Abdul” was orphaned when his mother was killed by a car. (Photo by Mark Nolan/Getty Images) 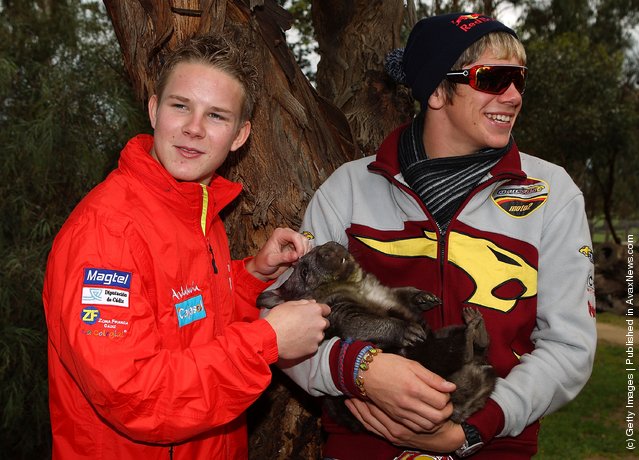 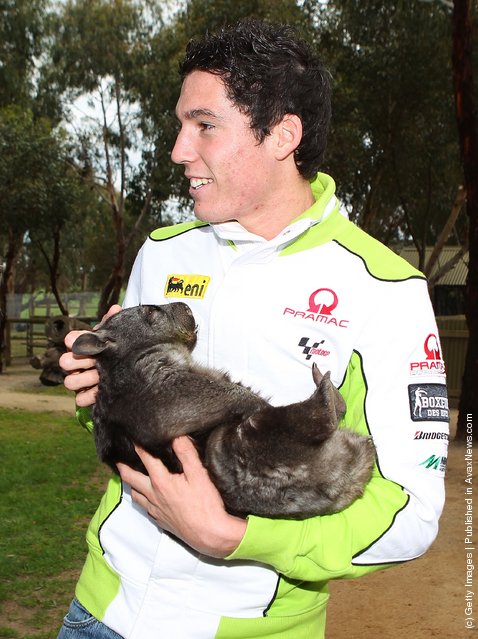 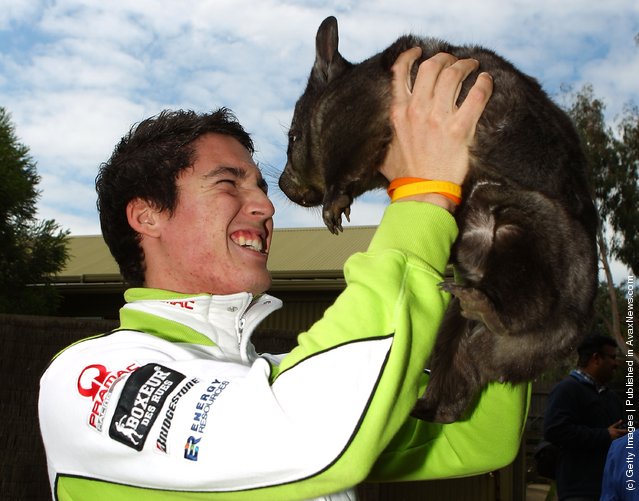 Aleix Esparago of Spain and the Pramac Racing Team poses with a wombat as he prepares for the Australian MotoGP, which is round 16 of the MotoGP World Championship, at the Maru Koala and Wildlife Park on October 14, 2010 in Phillip Island, Australia. (Photo by Robert Cianflone/Getty Images) 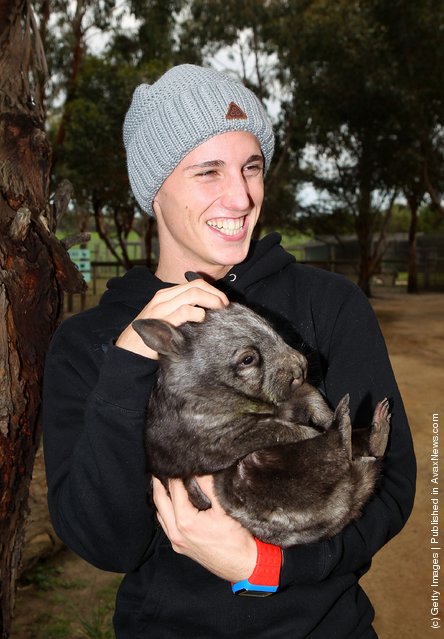 Pol Esparago of Spainand the Tuenti Racing Team poses with a wombat as he prepares for the Australian MotoGP, which is round 16 of the MotoGP World Championship, at the Maru Koala and Wildlife Park on October 14, 2010 in Phillip Island, Australia. (Photo by Robert Cianflone/Getty Images)
Edit Del
20 Aug 2011 11:23:00, post received 0 comments
Publication archive:
←   →
Popular tags:
All tags
Last searches: