Wow House in Middle of Chinese Highway
“Luo Baogen and his wife must have felt they were sitting pretty when they rejected government compensation for their apartment, saying it wouldn’t cover the cost of rebuilding somewhere else.

In any other jurisdiction their intransigence would probably trigger a lengthy court battle. But this was in China. The government forged ahead and built a four-lane highway, lapping the asphalt on either side of the five-storey apartment building in Xiazhangyang, a village in Zhejiang province.

The phenomenon is so common, it’s earned its own moniker: These structures are known as nail houses. In this case, demolition experts took down most of the Luos’ building after the neighbours moved out.

But because the law makes it illegal to demolish a property by force without an agreement, they left enough retaining walls to keep the structure standing. This allows the elderly couple – Mr. Luo is 67, his wife 65 – to continue living there.

The Luos say the government offer of 260,000 yuan (US$41,573) plus two small building sites was not enough to cover the several hundreds of thousands of yuan they said they had spent in renovating the building, the Shanghai Daily reported.

They can continue to live in the apartment as they have an adequate supply of electricity and water. But they said would-be burglars were a problem because the apartment is no longer protected by outside walls. The road, which leads to Wenling Railway Station, has yet to be opened. Once it does, they can expect a stream of traffic driving day and night”. – Araminta Wordsworth 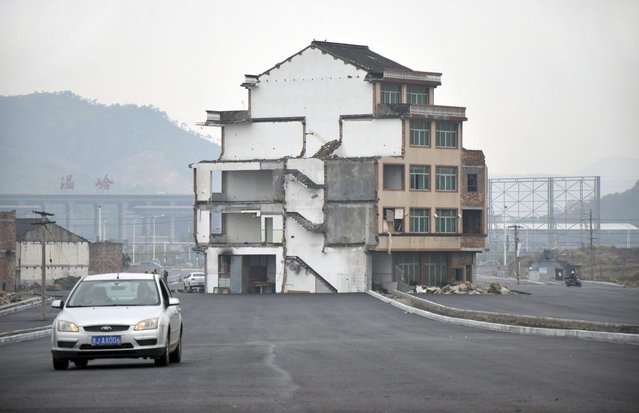 An isolated five-floor building stands in the middle of a new road on November 22, 2012 in Wenling, Zhejiang Province of China. Zhejiang Province of China. 67-year-old Luo Baogen and his 65-year-old wife from Xiazhangyang village still live in the half-demolished residential building, because they are dissatisfied with the relocation compensation. The road, which leads to the Wenling Railway Station, has not been put into use. (Photo by ChinaFotoPress) 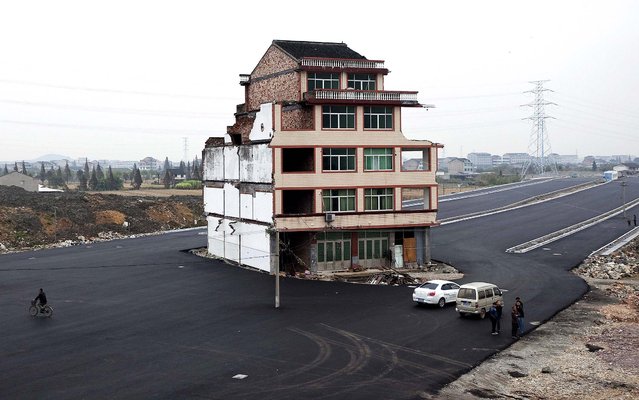 People stand near a house which sits in the middle of a newly built road in Wenling city in east China's Zhejiang province November 22, 2012. The house belongs to an elderly man, who refused to sign an agreement to allow his house to be demolished by the authorities, as the compensation offered to him was not enough, according to local media. (Photo by AFP Photo/Associated Press) 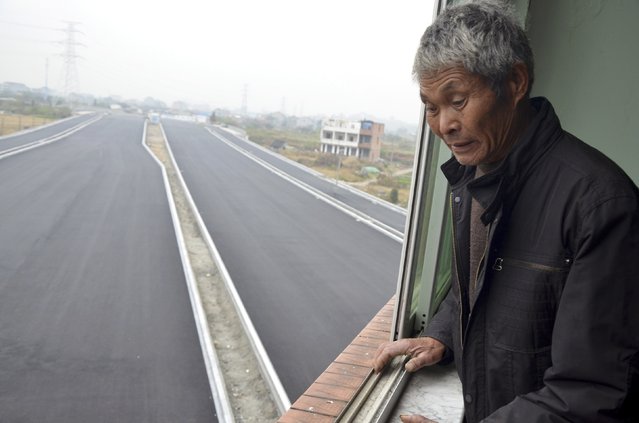 Luo Baogen looks down from his house which stands alone in the middle of a newly built road in Wenling, Zhejiang province, November 22, 2012. An elderly couple refused to sign an agreement to allow their house to be demolished. They say that compensation offered is not enough to cover rebuilding costs, according to local media. Their house is the only building left standing on a road which is paved through their village. (Photo by China Daily/Reuters) 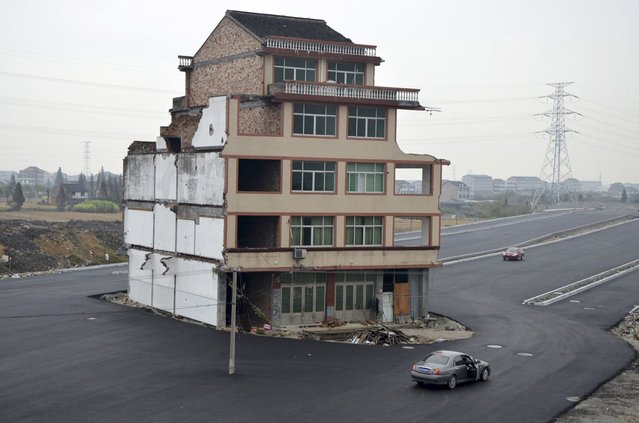 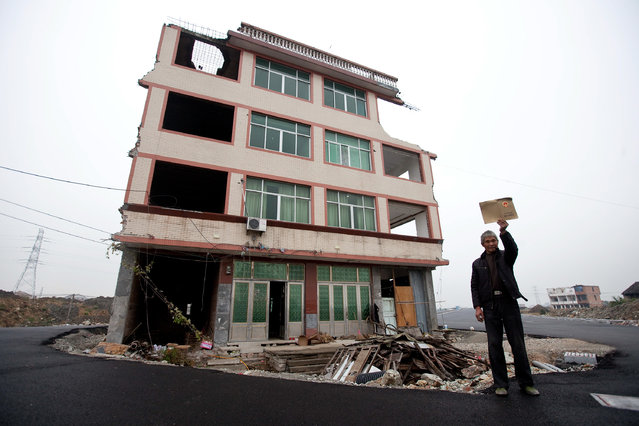 Luo Baogen holds his land certificate as he stands next to his house in the middle of a newly built road in Wenling city in east China's Zhejiang province Thursday, November 22, 2012. (Photo by AP Photo) 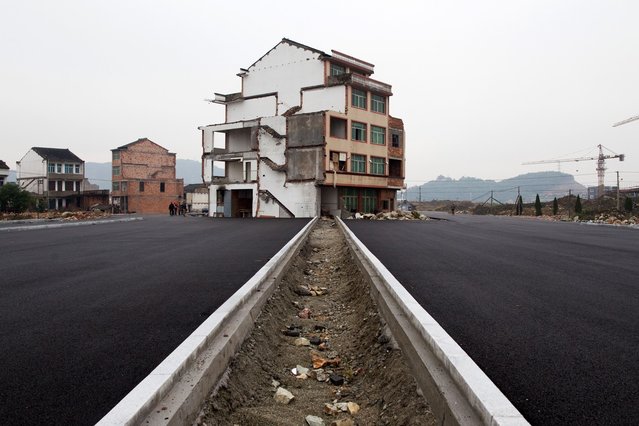 This picture taken on November 22, 2012 shows a half-demolished apartment building standing in the middle of a newly-built road thanks to a Chinese couple that refused to move in Wenling, in eastern China's Zhejiang province. Luo Baogen, 67, and his 65-year-old wife have waged a four-year battle to receive more than the 41,300 USD compensation offered by the local government of Daxi, a Chinese newspaper said. The phenomenon is called a “nail house” in China, as such buildings stick out and are difficult to remove, like a stubborn nail. (Photo by STR/AFP Photo) 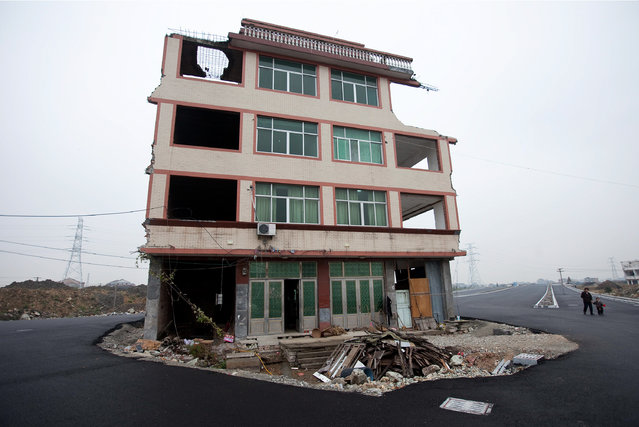 A woman and child walk past a house sit in the middle of a newly built road in Wenling city in east China's Zhejiang province Thursday, November 22, 2012. (Photo by AP Photo) 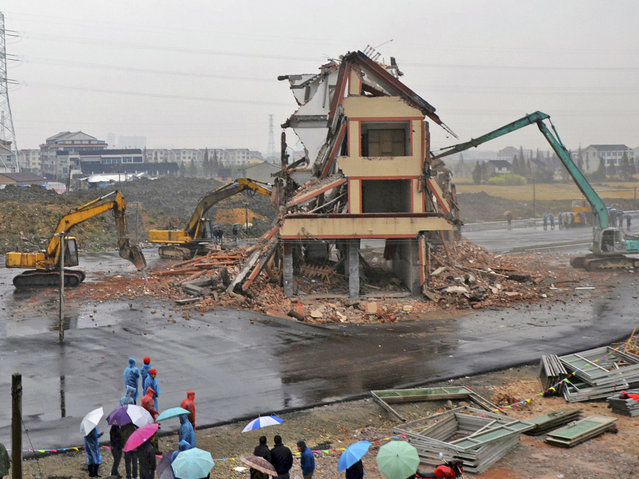 Excavators are used to demolish a house standing alone in the middle of a newly built road in Wenling, Zhejiang province December 1, 2012. Luo Baogen, the owner of the house, who earlier refused to sign an agreement to allow his house to be demolished, finally signed the agreement after discussions with the local government and his relatives, after Baogen agreed to accept compensation of 260,000 yuan ($41,000). The demolition of the house started this Saturday, local media reported. (Photo by China Daily/Reuters)
Edit Del
25 Nov 2012 09:49:00, post received 0 comments
Publication archive:
←   →
Popular tags:
All tags
Last searches: