Wow Tomato Fight
“La Tomatina is a festival that is held in the Valencian town of Buñol, in which participants throw tomatoes at each other.

In 1950, the council allowed the party to happen. The next year however it was opposed, and some participants were arrested. These people were quickly released thanks to pressure from town residents and other participants.

When the festival was finally officially sanctioned, the launching of tomatoes became inventive. Methods such as using water canons, catapults and filling of fountains of rivals became common. Between the noise and chaos, participants typically primed with those who were mere spectators, including local personalities. By 1957 the festival was once again banned with strict penalties, including imprisonment, threatened against those flouting the ban. In that year, the neighborhood decided to organize what they called “the funeral of the tomato”, which came in a procession carrying a coffin with a great tomato, accompanied by a band playing funeral hi marches along the path.

Due to local pressure, in 1959 the town finally approved the Tomatina, but imposed a rule that people could only throw tomatoes after a horn sounded and should end when it sounded a second time.

Between 1975 and 1980 the festival was organized by the ordeal of San Luis Bertran, who supplied the tomatoes, replacing the previous arrangement of participants bringing their own. The party became popular in Spain thanks to Javier Basilio reporting the issue in the RTVE Informe Semanal in 1983.

Since 1980 the City Council provides participants with tomatoes, each year a greater tonnage than the previous year. Visitors became attracted to the event and in 2002 it was declared a Fiesta of International Tourist Interest. In 2008 a soundtrack was created, the song of the Tomatina “Todo es del mismo color” created by the bunyolense rock band «Malsujeto»”. – Wikipedia 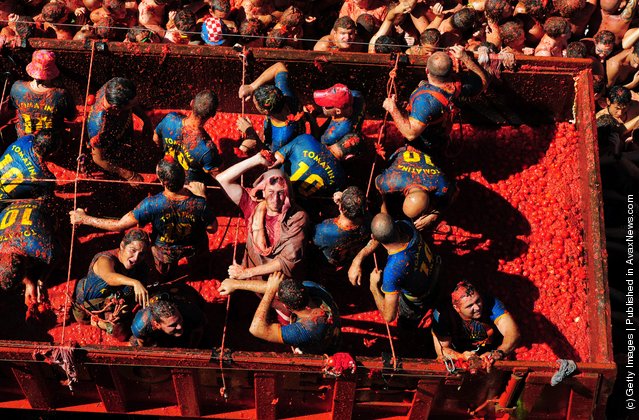 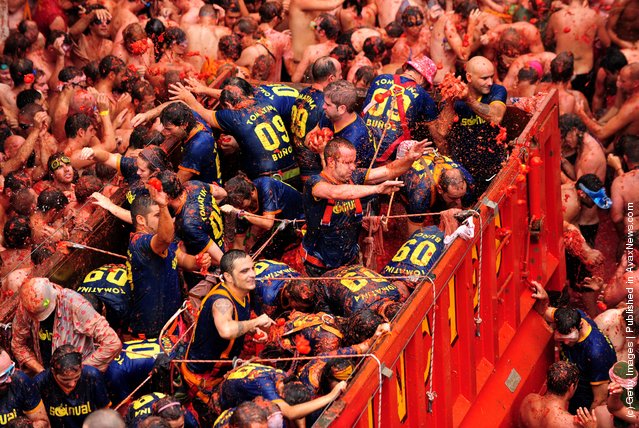 Revellers pelt each other with tomatoes during the world's biggest tomato fight at La Tomatina festival on August 25, 2010 in Bunol, Spain. More than 45000 people from all over the world descended on the small Valencian town to participate La Tomatina festival, with the local town hall estimating that over 100 tons of rotten and over-ripe tomatoes were thrown. (Photo by Jasper Juinen/Getty Images) 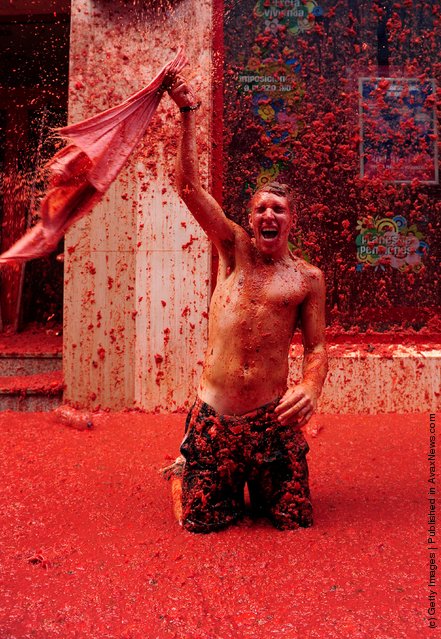 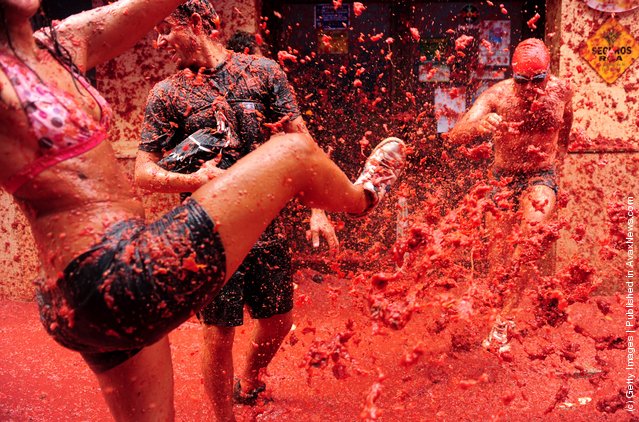 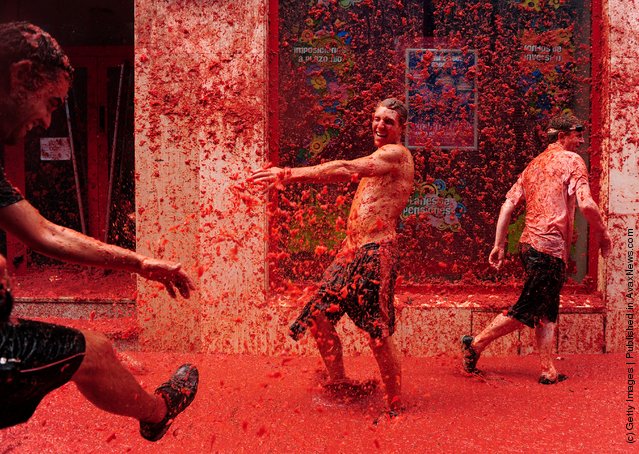 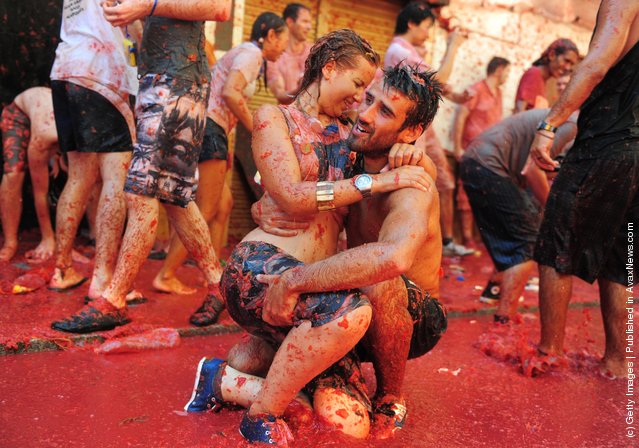 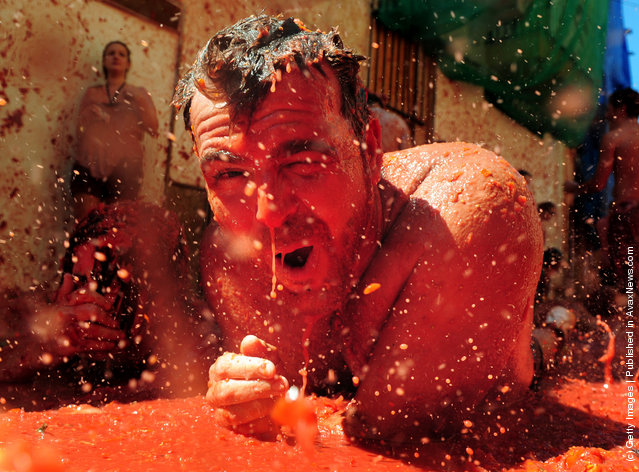 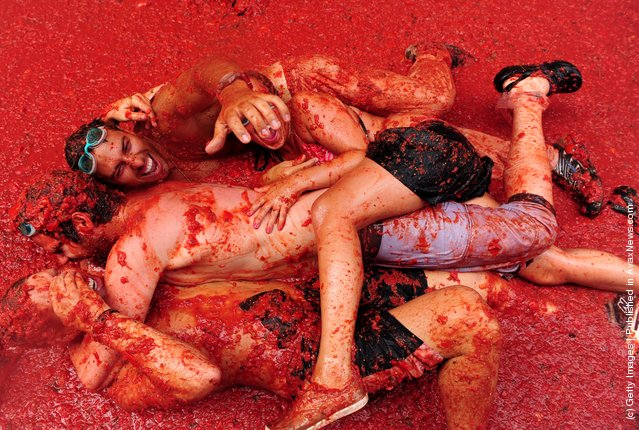 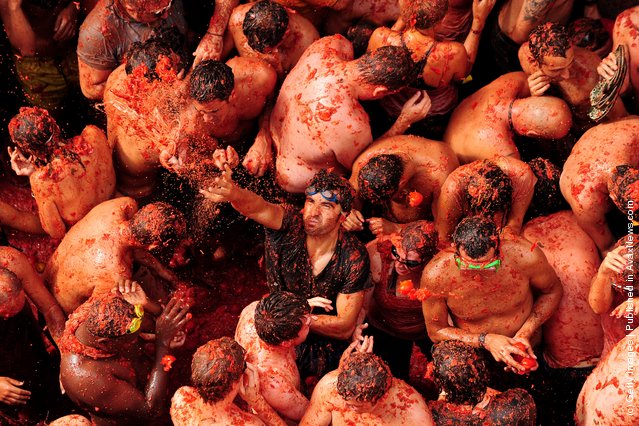 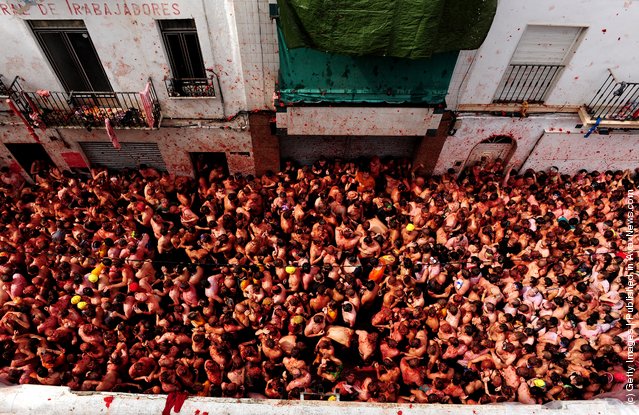