Educative What Kids around the World Eat 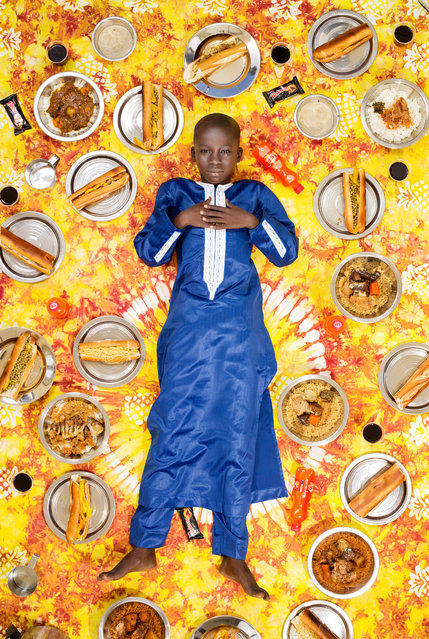 Photographer Gregg Segal travelled the world to document children and the food they eat in a week. Partly inspired by the increasing problems of childhood obesity, he tracked traditional regional diets as yet unaffected by globalisation, and ironically, found that the healthiest diets were often eaten by the least well off. Here: Meissa Ndiaye, 11, Dakar, Senegal, 2017. Ndiaye shares a single room with his dad, mum and brother in the heart of Parcelles Assainies, which means “sanitized plots”. A treeless, sandy suburb of Dakar, Parcelles Assainies was developed in the 1970s to house the poor overflowing from the city. Ndiaye, a devout Muslim and student at Quran School, loves sweet foods, such as a porridge, and goat meat, although in the week he kept a diary of his meals, he ate very little meat. (Photo by Gregg Segal/The Guardian) 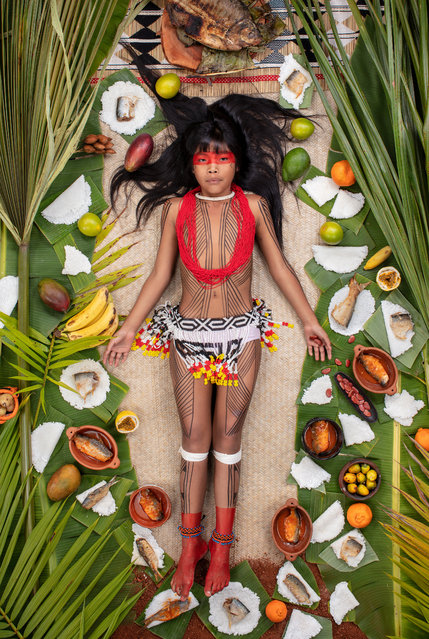 Kawakanih Yawalapiti, 9, Upper Xingu region of Mato Grosso, Brazil, 2018: Kawakanih lives with her tribe, the Yawalapiti, in Xingu national park, a preserve in the Amazon basin of Brazil. The Yawalapiti collect seeds to preserve species unique to their ecosystem, which lies between the rain forest and savannah. Kawakanih’s diet is simple, consisting mainly of fish, cassava, porridge, fruit and nuts. “It takes five minutes to catch dinner”, says Kawakanih. “When you’re hungry, you just go to the river with your net”. (Photo by Gregg Segal/The Guardian) 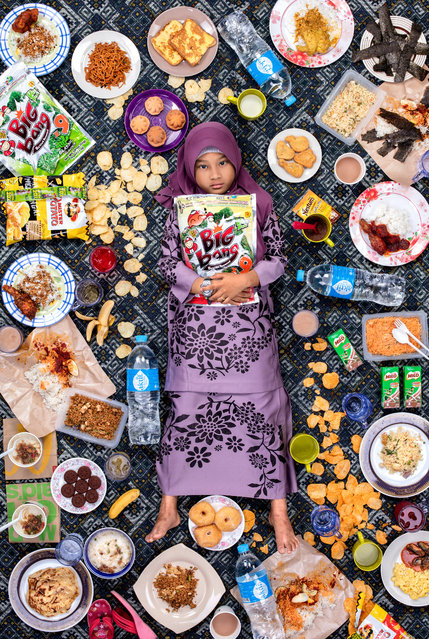 Nur Zahra Alya Nabila Binti Mustakim, 7, Kajang, Malaysia, 2017: Nur’s parents work in the hospitality industry and have a three-bedroom townhouse in Taman Sinaran, Balakong, a busy neighbourhood in the state of Kajang, south of Kuala Lumpur. About 90% of Nur’s meals are homemade; she loves her mother’s cooking, especially her nasi lemak, a blend of rice, boiled eggs, cucumber, anchovies, peanuts and sambal (hot sauce) cooked in coconut milk and wrapped in banana leaves. (Photo by Gregg Segal/The Guardian) 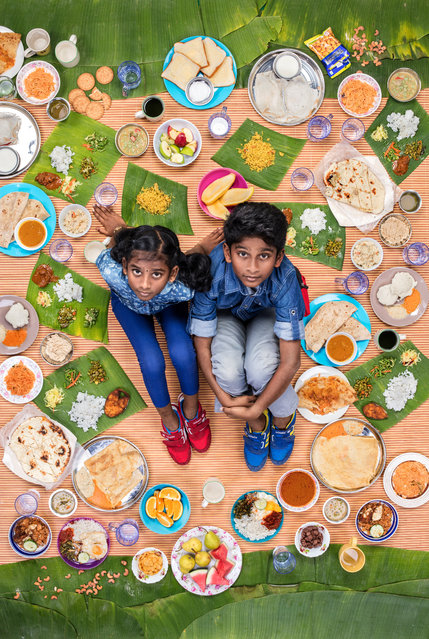 Tharkish Sri Ganesh (right), 10 and Mierra Sri Varrsha, 8, Kuala Lumpur, Malaysia, 2017: Tharkish and Mierra live with their mum and dad in a public housing project in Bukit Jalil, a suburb of Kuala Lumpur. Their apartment block is full of friends and noisy, in a good way. Their dad works as a gaffer in film production and their mum is a homemaker and does most of the cooking, although on weekends, they eat KFC, Pizza Hut or Chinese takeaway. (Photo by Gregg Segal/The Guardian) 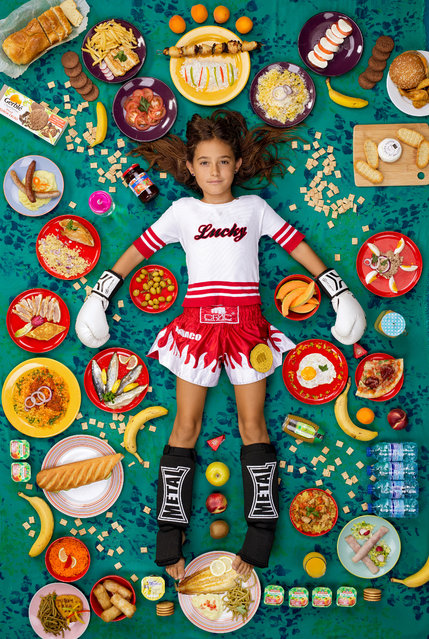 Rosalie Durand, 10, Nice, France, 2017: since her parents split up, Rosalie has lived part-time with her mum and part-time with her dad, which allows her to see both the Mediterranean Sea and the French Alps. She has a healthy diet, which includes lots of fresh fish, such as sardines, thanks in part to her father, a restaurateur, who has taught her to make crepes, salads and lentils with sausage, her favourite dish. (Photo by Gregg Segal/The Guardian) 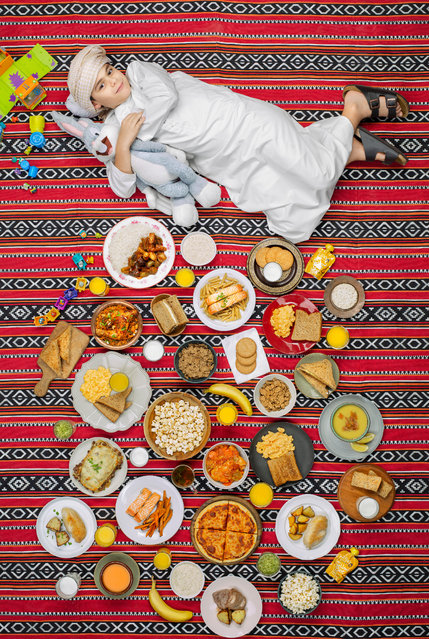 Yusuf Abdullah Al Muhairi, 9, Mirdif, Dubai, UAE, 2018: Yusuf’s mum went to Dubai from Ireland to work as a pastry chef and chocolatier. She married an Emerati man and they had one son before separating. Yusuf loves his mum’s cooking, although he makes scrambled eggs and toast. Lying in bed at night, he thinks back to summer in Ireland, fishing with his granddad and building a birdhouse. (Photo by Gregg Segal/The Guardian) 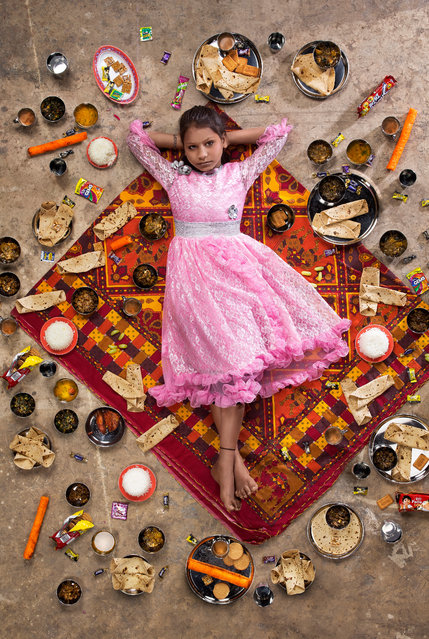 Anchal Sahani, 10, Chembur, Mumbai, India, 2017: Anchal lives in an 2.4 metre x 2.4 metre aluminium shack on a construction site in a suburb of Mumbai with her parents and two siblings. Although her father makes less than $5 a day, it’s just enough for her mother to buy fresh vegetables, such as okra and cauliflower, and make homemade curry, lentils and roti from scratch. (Photo by Gregg Segal/The Guardian) 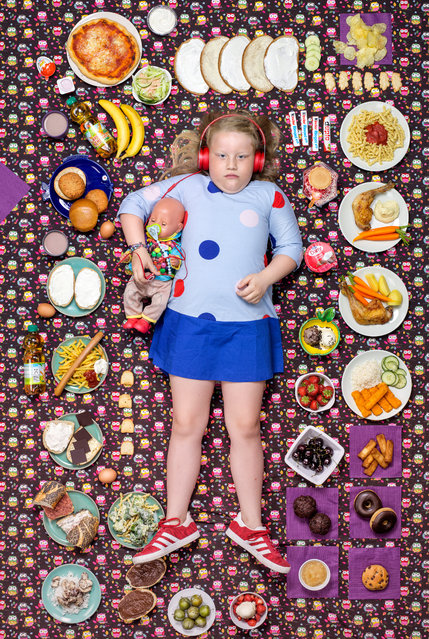 Greta Moeller, 7, Hamburg, Germany, 2017: Greta lives with her mother and younger sister in Hamburg, but spends quite a bit of time with her grandparents, too. On the path to her grandparents’ home is a great big chestnut tree and, in autumn, Greta searches in the foliage for chestnuts with her little sister. Greta’s favourite food is fish sticks with mashed potatoes and applesauce. She can’t stand rice pudding. (Photo by Gregg Segal/The Guardian) 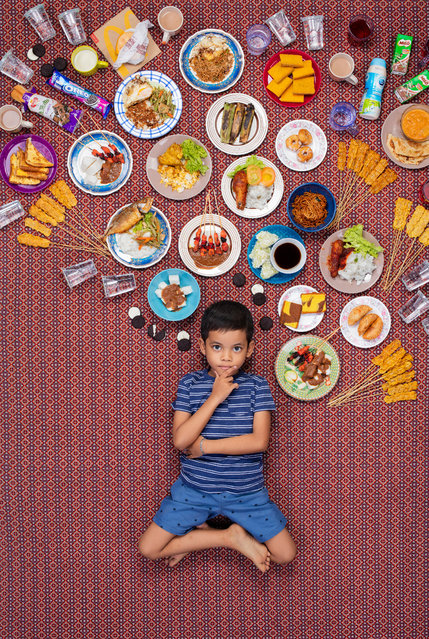 Altaf Rabbal DLove Bin Roni, 6, Gombak, Malaysia, 2017: Altaf and his family live in Kampung Kerdas, a small village of about 30 families on the outskirts of Kuala Lumpur. Altaf’s father makes and sells satay sticks at his own stand. Altaf’s favourite food is his father’s chicken and beef satay. Seasoned with ginger and herbs, it’s roasted over a charcoal fire and served with sliced, cold cucumber. (Photo by Gregg Segal/The Guardian) 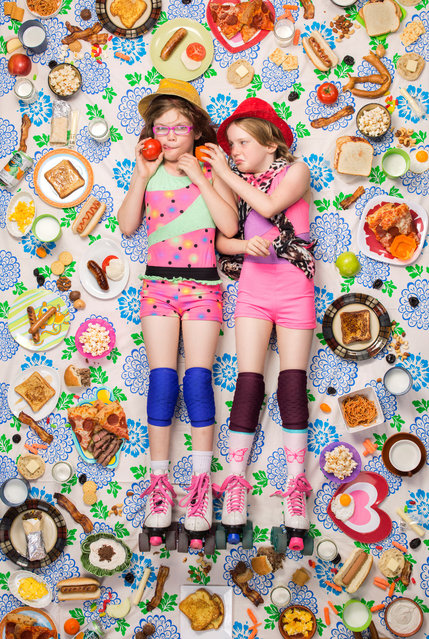 Alexandra Lewis, 9, and Jessica Lewis, 8, Altadena, California, 2016: Alex and Jessica live in the foothills of Altadena with their daddy and papa, who are engineers at the jet propulsion laboratory, a Nasa field centre in La Canada, California. Their garden is filled with food: blackberry bushes, grape vines and fruit trees – fig, peach, pomegranate, guava, mulberry, jujubes and banana. They have chickens, too, and eat their eggs almost every day. (Photo by Gregg Segal/The Guardian) 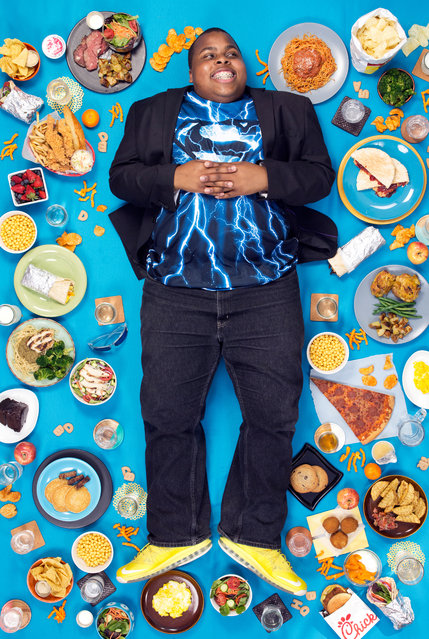 Isiah Dedrick, 16, Long Beach, California, 2016: Isaiah was raised by his mother and grandmother, who does most of the cooking. One day, Isaiah would like to have enough space to have his own garden. His favourite food is orange chicken and fried rice and he loves the smell of apples sautéed with cinnamon. His mum doesn’t permit him to drink soda and, after the photo shoot, Isaiah decided to eliminate snacks from his diet. (Photo by Gregg Segal/The Guardian) 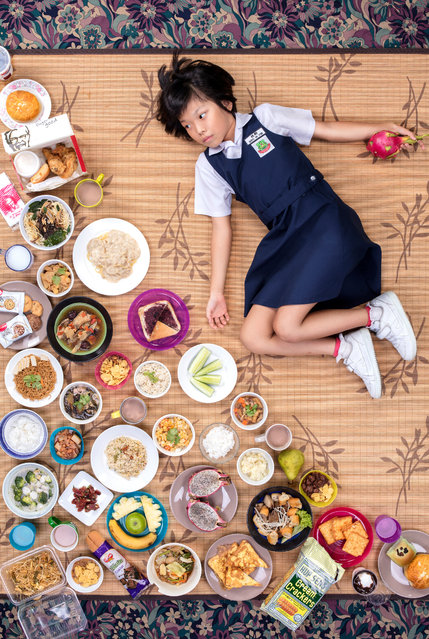 Beryl Oh Jynn, 8, Kuala Lumpur, Malaysia, 2017: Beryl lives in a quiet condominium with her parents and two brothers. Beryl’s dad is an engineer and her mother runs a nursery. Beryl’s earliest memory of food is porridge and cake. Her favourite dish is spaghetti with carbonara sauce. Beryl grows pak choi and spinach in her balcony garden, is not permitted to drink sodas and refuses to eat ginger. (Photo by Gregg Segal/The Guardian)
Edit Del
03 Jul 2019 00:03:00, post received 0 comments
Publication archive:
←   →
Popular tags:
All tags
Last searches: