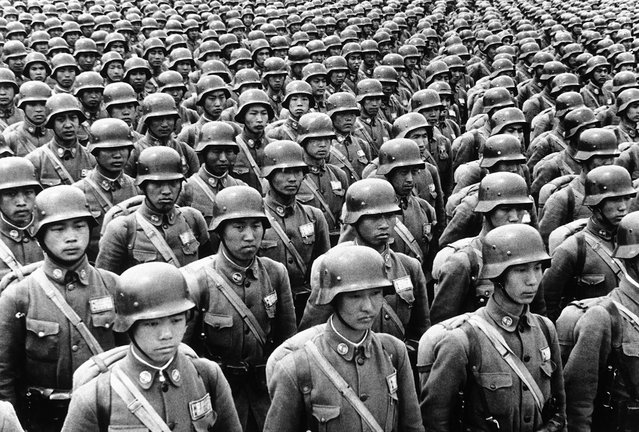 Entering their fourth year of war against Japan, Chinese military forces were strengthening their air force, producing their own armaments, and training their officers in the methods of modern war. Here, Chinese cadets in full battle dress, they favor the German type of steel helmet, on parade somewhere in China, on July 11, 1940. (AP Photo) 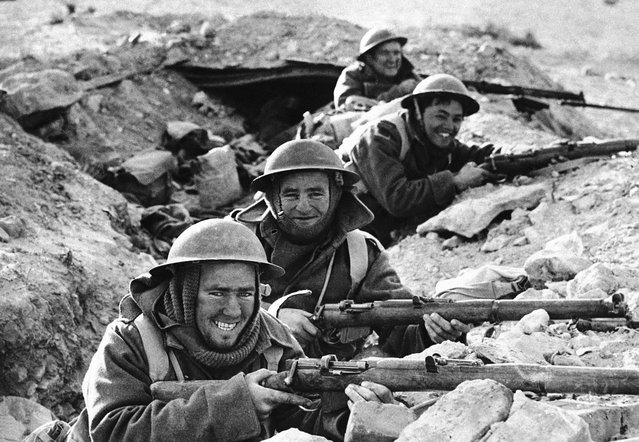 British Infantrymen in position in a shallow trench near Bardia, a Libyan Port, which had been occupied by Italian forces, and fell to the Allies on January 5, 1941, after a 20-day siege. (AP Photo) 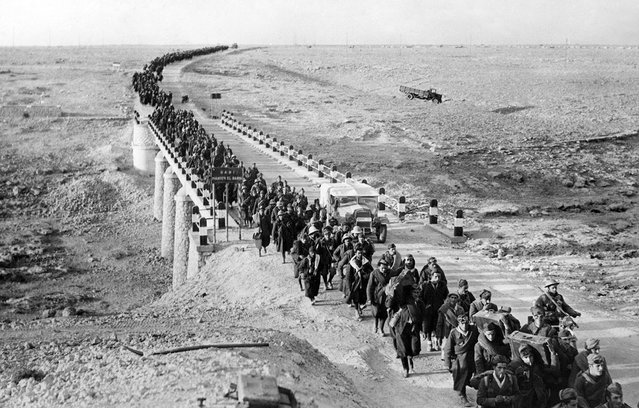 Bardia, a fortified Libyan seaport, was captured by British forces, with more than 38,000 Italian prisoners, including four generals, and vast quantities of war material. An endless stream of Italian prisoners leaves Bardia, on February 5, 1941, after the Australians had taken possession. (AP Photo) 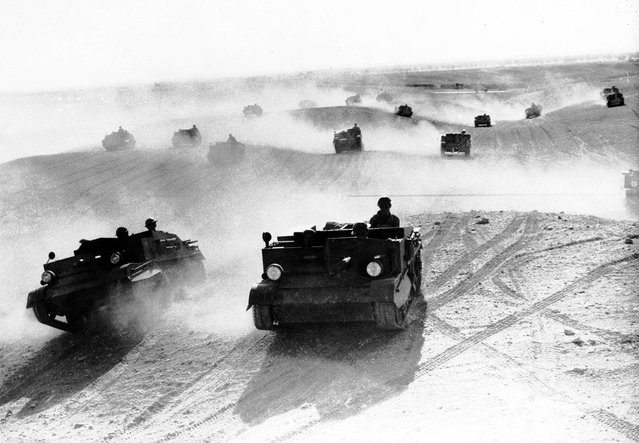 A squadron of Bren gun carriers, manned by the Australian Light Cavalry, rolls through the Egyptian desert in January of 1941. The troops performed maneuvers in preparation for the Allied campaign in North Africa. (AP Photo) 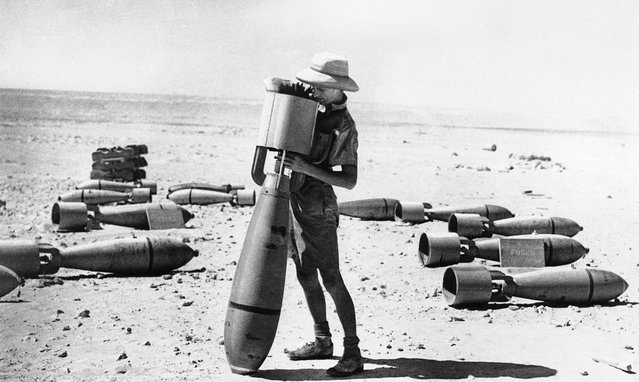 This armorer of the R.A.F.'s middle east command prepares a bomb for its mission against the Italian forces campaigning in Africa. This big bomb is not yet fused, but when it is it will be ready for its deadly work. Photo taken on October 24, 1940. (AP Photo) 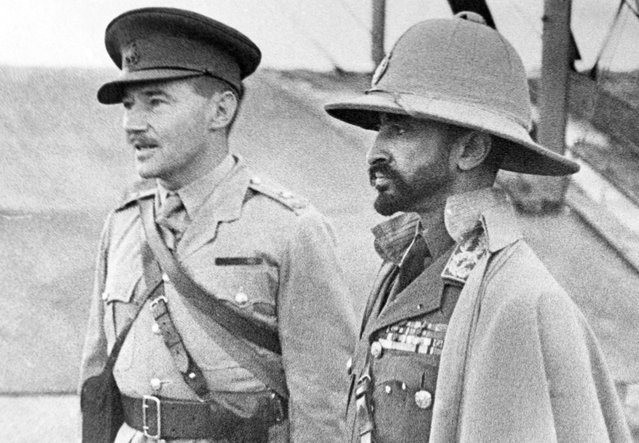 Haile Selassie (right), exiled Emperor of Ethiopia, whose empire was absorbed by Italy, returns with an Ethiopian army recruited to aid the British in Africa, on February 19, 1941. Here, the emperor inspects an airport, an interpreter at his side. On May 5, 1941, after the Italians in Ethiopia were defeated by Allied troops, Selassie returned to Addis Ababa, and resumed his position as ruler. (AP Photo) 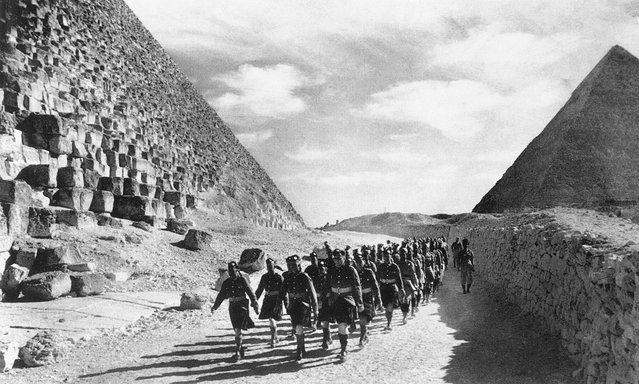 Cameron Highlanders, a Scottish infantry regiment of the British Army, and Indian troops march past the Great Pyramid in the North African Desert, on December 9, 1940. (AP Photo) 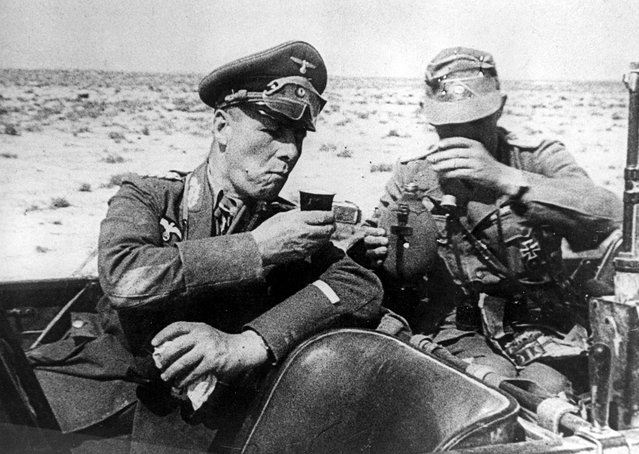 Field Marshal Gen. Erwin Rommel, commander of the German Afrika Korps, drinks out of a cup with an unidentified German officer as they are seated in a car during inspection of German troops dispatched to aid the Italian army in Libya in 1941. (AP Photo) 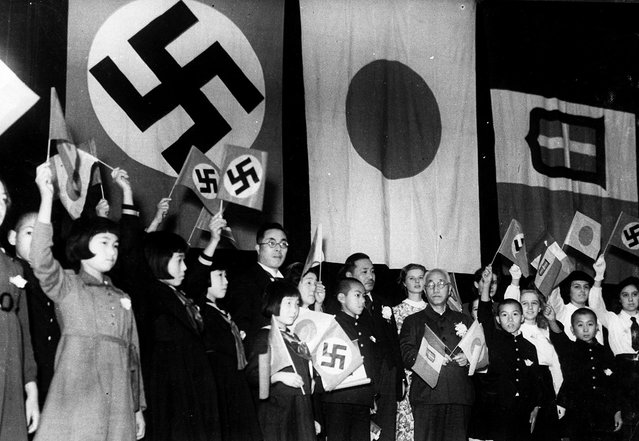 Children of Japan, Germany, and Italy meet in Tokyo to celebrate the signing of the Tripartite Alliance between the three nations, on December 17, 1940. Japanese education minister Kunihiko Hashida, center, holding crossed flags, and Mayor Tomejiro Okubo of Tokyo were among the sponsors. (AP Photo) 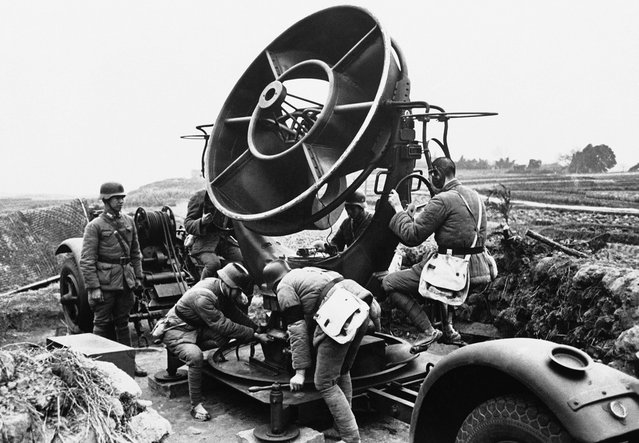 Chinese soldiers man a sound detector which directs the firing of 3-inch anti-aircraft guns, around the city of Chongqing, China, on May 2, 1941. (AP Photo) 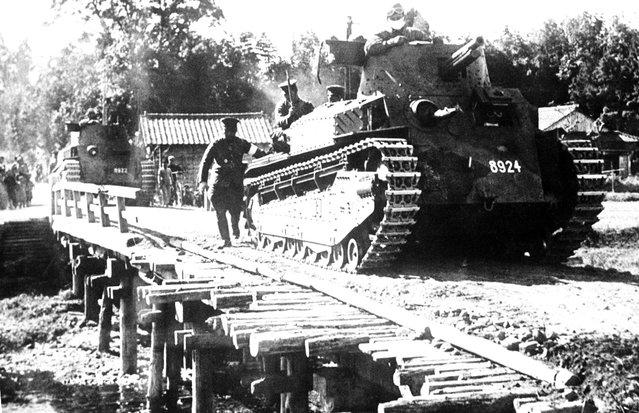 A Japanese tank passes over an emergency bridge, somewhere in China, on June 30, 1941. (AP Photo) 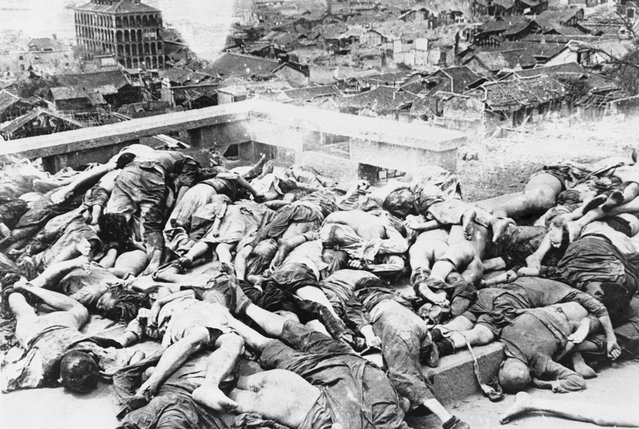 Bodies of dead Chongqing citizens lie in piles after some 700 people were reportedly killed by a Japanese bombing raid on China in July of 1941. Between 1939 and 1942, more than three thousand tons of bombs were dropped by Japanese aircraft over Chongqing, resulting in well over 10,000 civilian casualties. (AP Photo) 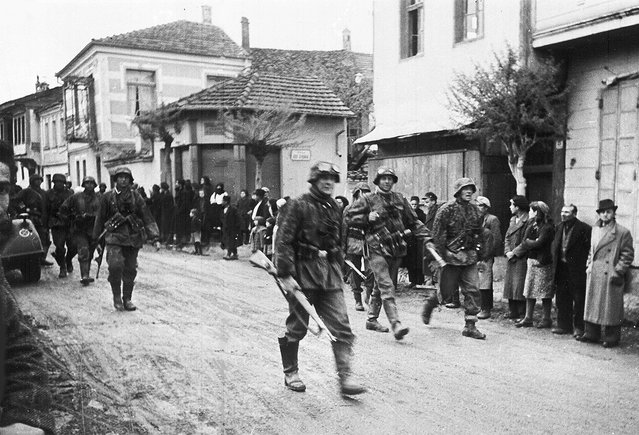 A squad of German soldiers pass through a Greek village, during the occupation of Greece, in May 1941. (AP Photo) 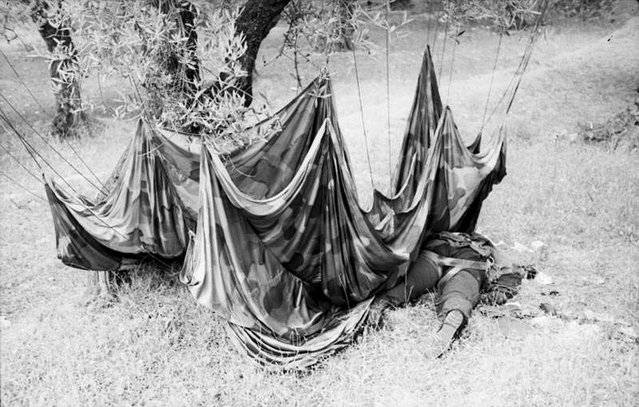 A fallen paratrooper and his parachute, on the island of Crete, in early 1941. (Photo by Deutsches Bundesarchiv/German Federal Archive) 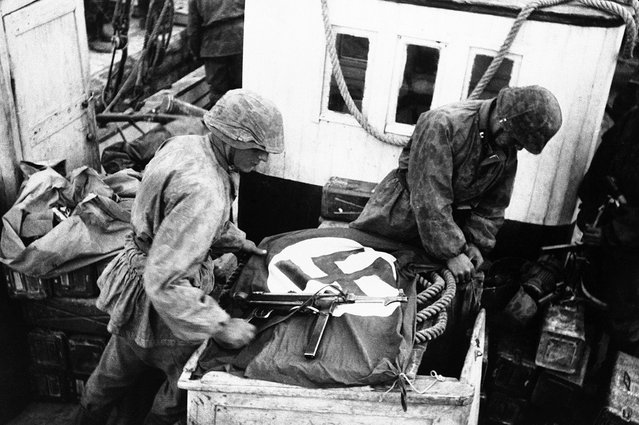 To alert their own airforce to their presence, soldiers spread the Swastika across boats used by the S.S. troops to cross the Gulf of Corinth, Greece, on May 23, 1941. (AP Photo) 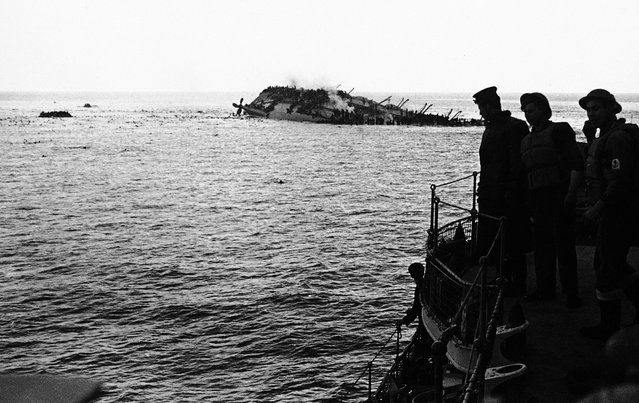 The dramatic scene as the Cunard White Star liner Lancastria was sunk on August 3, 1940. The Lancastria was evacuating British nationals and troops from France, and had boarded as many as possible for the short trip – an estimated 4,000 to 9,000 passengers were aboard. A German Junkers 88 aircraft bombed the ship shortly after it departed, and it sank within twenty minutes. While 2,477 were rescued, an estimated 4,000 others perished by bomb blasts, strafing, drowning, or choking in oil-fouled water. Photo taken from one of the rescue boats as the liner heels over, as men swarm down her sides and swim for safety to the rescue ships. Note the large number of bobbing heads in the water. (AP Photo) 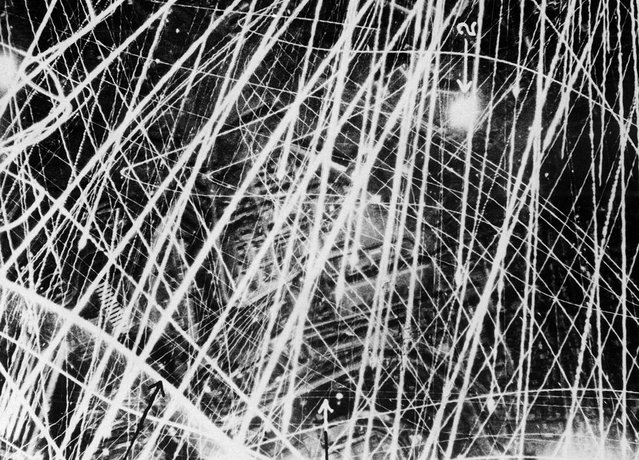 This photograph was taken on Jan. 31, 1941, during a nigthtime air raid carried out by the Royal Air Force above Brest, France. It gives a graphic impression of what flak and anti-aircraft fire looks like from the air. In the period of three to four seconds during which the shutter remained open, the camera clearly captured the furious gunfire. The fine lines of light show the paths of tracer shells, and the broader lines are those of heavier guns. Factories and other buildings can be seen below. (Photo by AP Photo/British Official Air Ministry) 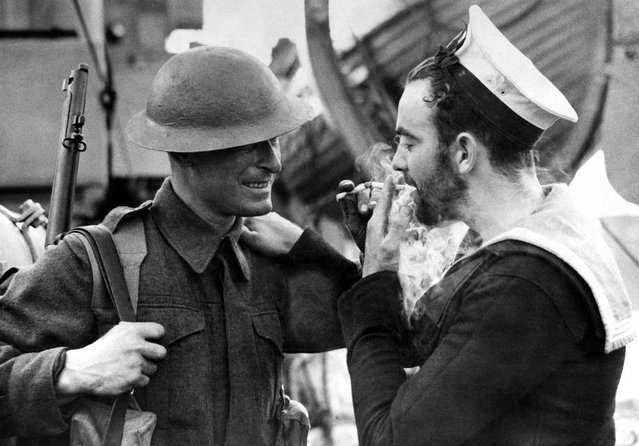 Two examples of Britain's war forces, a soldier in battle dress and a bearded Canadian sailor share a light at an English port, on January 14, 1941. (AP Photo) 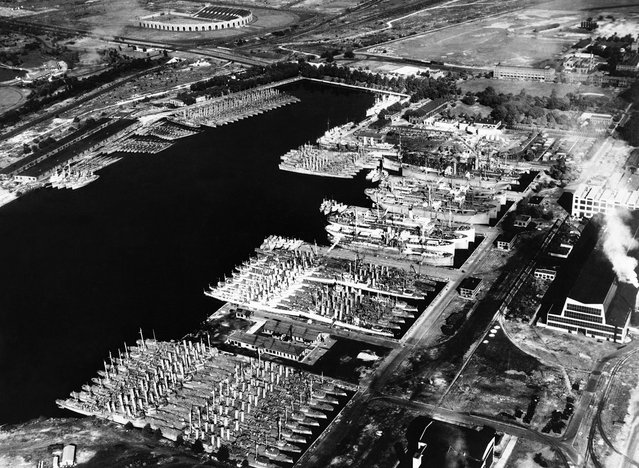 Outdated, but serviceable U.S. destroyers sit in the Back Bay at the Philadelphia Navy Yard, on Aug. 28, 1940. Plans were well underway to bring these ships up to date and transfer them to Allied countries to aid their defense. These programs would be signed into law as the Lend-Lease program in March of 1941, and would result in billions of dollars worth of war material being shipped overseas. (AP Photo) 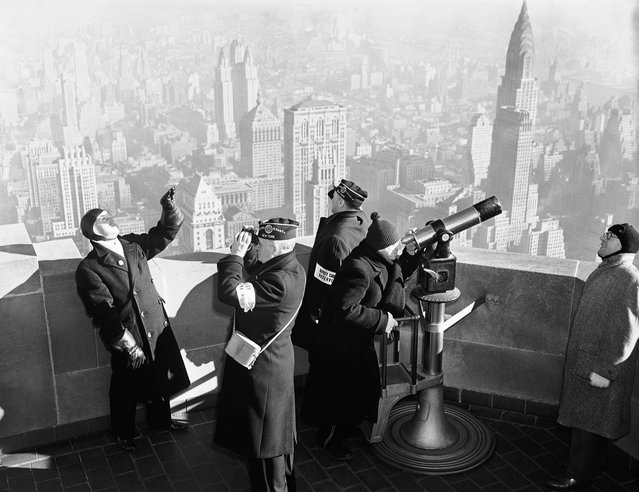 A crew of observers on the Empire State building, during an air defense test, on January 21, 1941 in New York City, conducted by the U.S. Army. Their job was to spot “invading enemy” bombers and send information to centers which order interceptor planes. The tests, to run for four days, covered an 18,000-square-mile area in northeastern states. (Photo by AP Photo/John Lindsay) 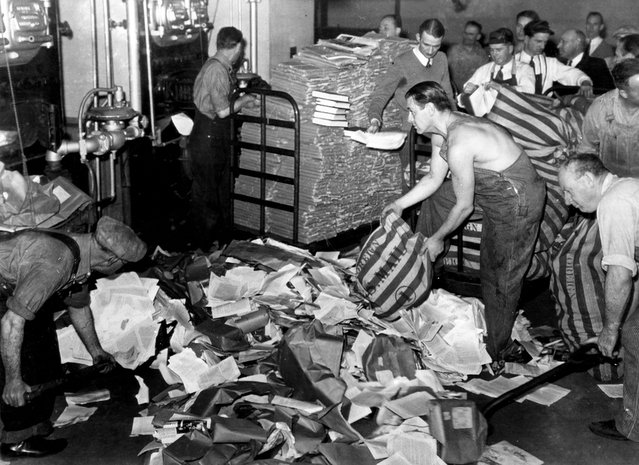 U.S. Postal employees feed 17 tons of reading matter, labeled by postal authorities as propaganda, into a furnace in San Francisco, California, on March 19, 1941. The bulk of the newspapers, books, and pamphlets came from Nazi Germany and some from Russia, Italy and Japan. (AP Photo)

These Arab recruits line up in a barracks square in the British Mandate of Palestine, on December 28, 1940, for their first drill under a British solider. Some 6,000 Palestinian Arabs signed up with the British Army during the course of World War II. (AP Photo) 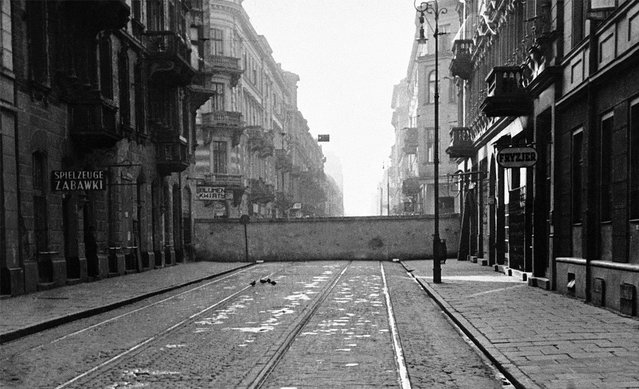 A newly-constructed wall partitions the central part of Warsaw, Poland, seen on December 20, 1940. It is part of red brick and gray stone walls built 12 to 15 feet high by the Nazis as a ghetto – a pen for Warsaw's approximately 500,000 Jews. (AP Photo) 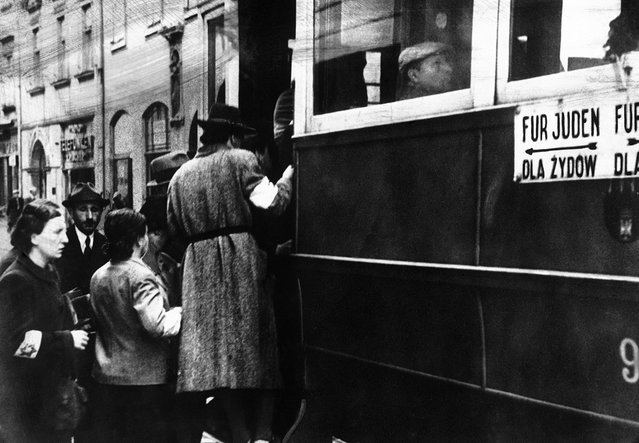 A scene from the Warsaw Ghetto where Jews are seen wearing white armlets bearing the Star of David and trams are seen marked with the words “For Jews”, on February 17, 1941. (AP Photo) 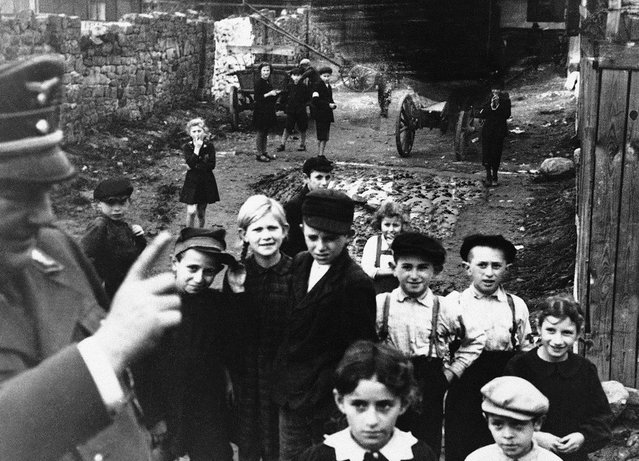 A German Army officer lecturers children in a ghetto in Lublin, German-occupied Poland, on December 1940, telling them “Don't forget to wash every day”. (AP Photo) 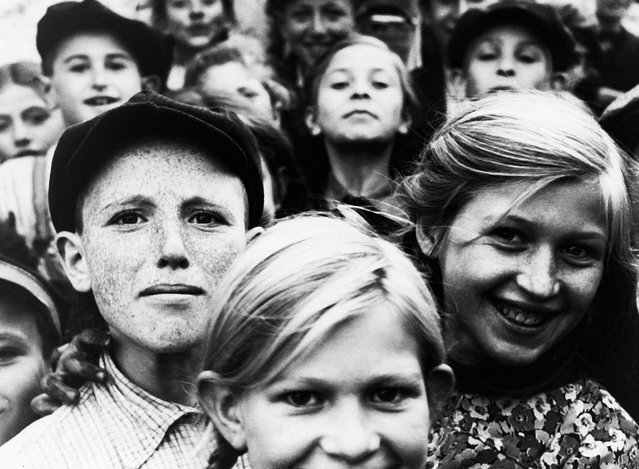