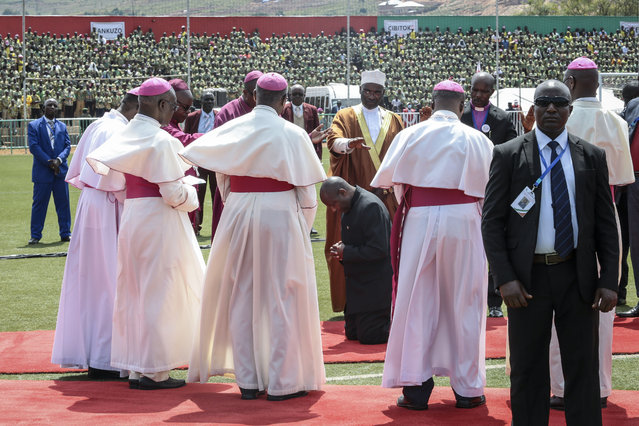 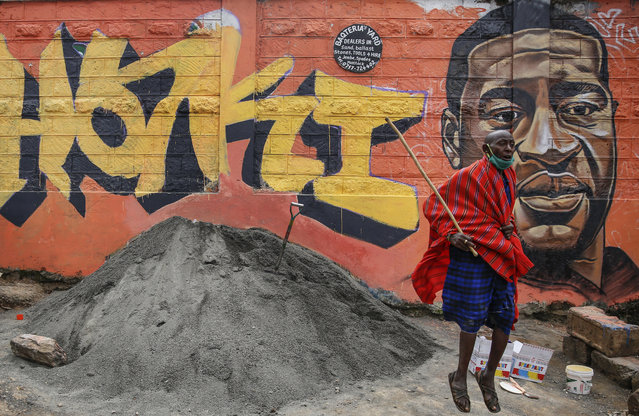 In this Wednesday, June 3, 2020, file photo, a Maasai man jumps next to a new mural painted this week in the Kibera slum of Nairobi, Kenya, showing George Floyd with the Swahili word “Haki” or “Justice”. Floyd’s killing in the United States has raised awareness over police violence in South Africa and Kenya. (Photo by Brian Inganga/AP Photo/File) 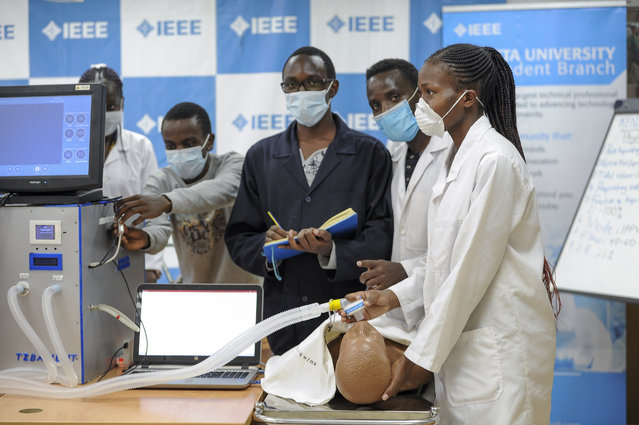 In this Monday, April 13, 2020 file photo, medical students test a self-designed computer-controlled ventilator prototype at the Chandaria Business and Incubation Centre of Kenyatta University in Nairobi, Kenya. More than two dozen international aid organizations have told the U.S. government they are “increasingly alarmed” that “little to no U.S. humanitarian assistance has reached those on the front lines” of the coronavirus pandemic as the number of new cases picks up speed in some of the world's most fragile regions. (Photo by John Muchucha/AP Photo/File) 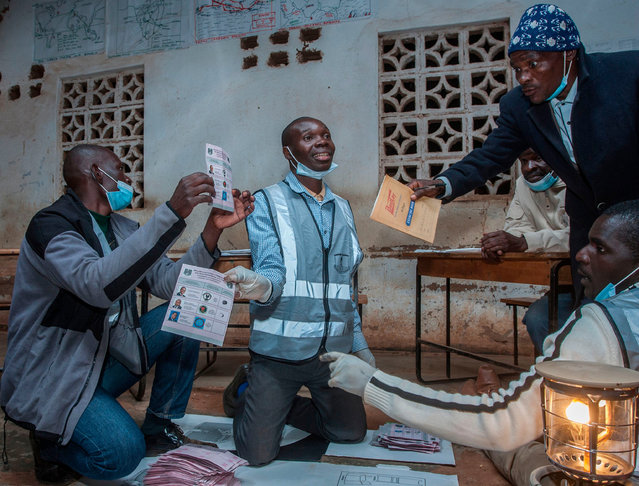 Electoral officials and political party monitors count votes during the presidential elections during the presidential elections at the Mighty Caspia polling station in Area 23, a residential location in Lilongwe on June 23, 2020. Malawians return to the polls on June 23, 2020 for the second time in just over a year to vote for a new president after Peter Mutharika's re-election was annulled over rigging The election is much anticipated after the Constitutional Court early this year ruled that the May 2019 vote, won narrowly by Mutharika, was fraught with “grave and widespread irregularities” including the use of correction fluid on results sheets. (Photo by Amos Gumulira/AFP Photo) 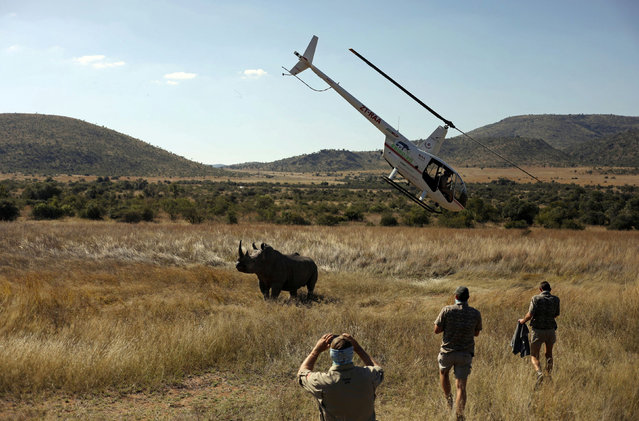 A helicopter flies over as workers approach a tranquillised rhino before dehorning it in an effort to deter poaching, amid the spread of the coronavirus disease (COVID-19), at the Pilanesberg Game Reserve in North West Province, South Africa, May 12, 2020. (Photo by Siphiwe Sibeko/Reuters) 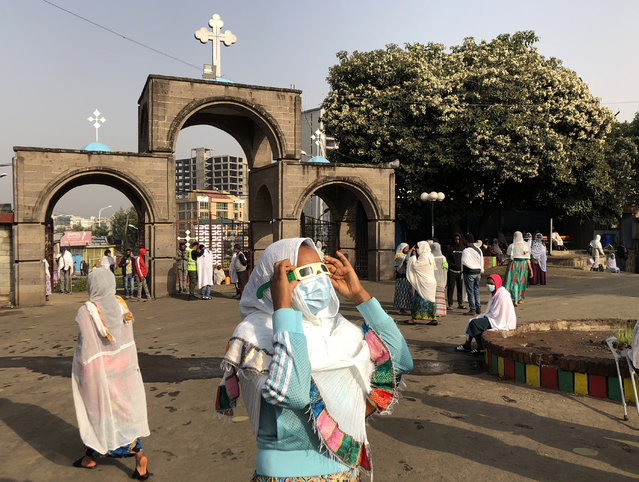 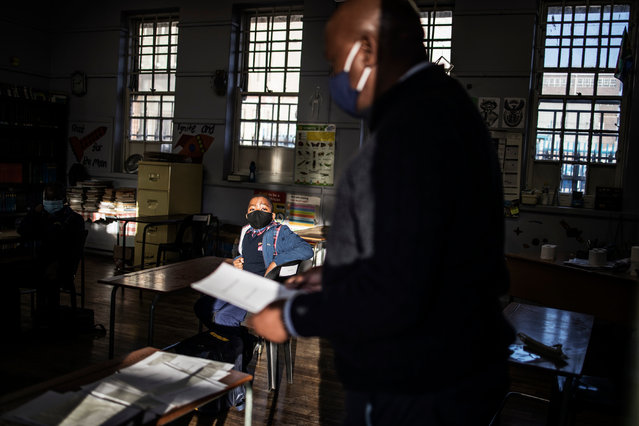 Pupils at the City Kidz Pre & Primary School in the Inner City district in Johannesburg sits in class as a teacher checks the register on June 1, 2020. South Africa moved into level three of a five-tier lockdown on June 1, 2020, to continue efforts to curb the spread of the COVID-19 coronavirus. Under level three, all but high-risk sectors of the economy will be allowed to reopen There are however a lot of confusion around the reopening of schools as some schools have opened and others remain closed. (Photo by Marco Longari/AFP Photo) 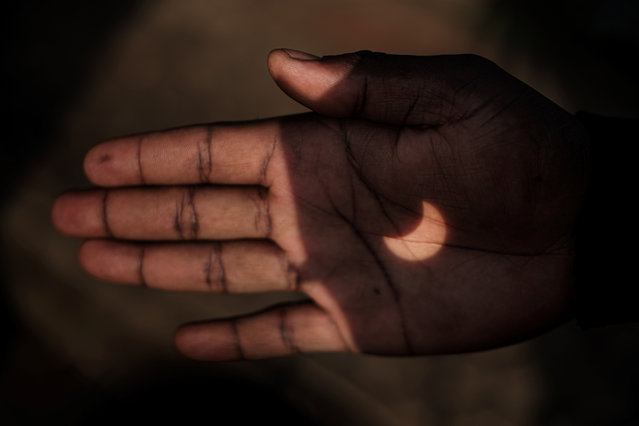 The partial solar eclipse is projected on a Kenyan man's hand through binoculars in Nairobi, Kenya on June 21, 2020. (Photo by Yasuyoshi Chiba/AFP Photo) 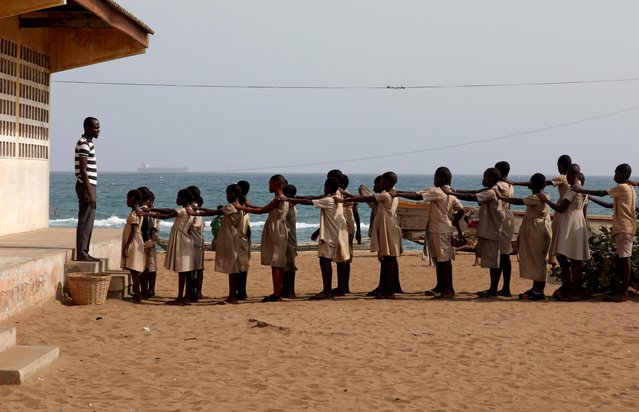 Pupils line up in the yard of their school, which, according to head teacher Hlongnoin Akouavi, was damaged by sea storms and is under threat from coastal erosion, in Baguida, a suburb of Lome, Togo, February 24, 2020. (Photo by Luc Gnago/Reuters) 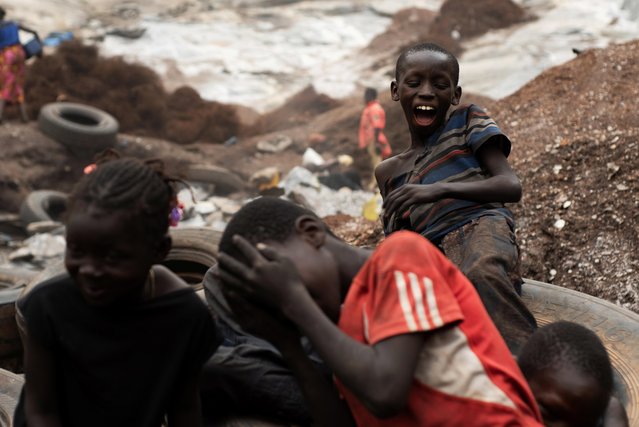 Ali Nana, 8, plays with friends on used tires in Pissy informal granite quarry, since schools closed amid the outbreak of the coronavirus disease (COVID-19), in Ouagadougou, Burkina Faso on June 12, 2020. (Photo by Anne Mimault/Reuters) Members of a rescue team carry a body of landslide victim after unusually heavy rains, that killed at least 13 people overnight in Anyama near Abidjan, Ivory Coast on June 18, 2020. (Photo by Thierry Gouegnon/Reuters) 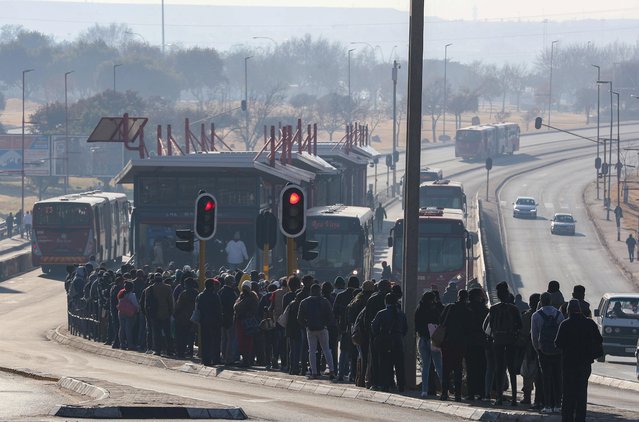 Buses are seen as stranded commuters wait for transportation at a bus terminal during a protest by taxi operators over the government's financial relief for the taxi industry, amid the coronavirus disease (COVID-19) lockdown, in Soweto, South Africa, June 22, 2020. (Photo by Siphiwe Sibeko/Reuters) 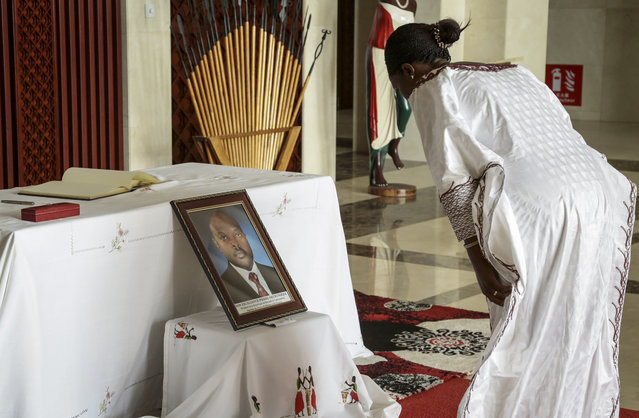 An unidentified dignitary pays her respects after signing the book of condolences in front of a photograph of the late President Pierre Nkurunziza, at the presidential palace in Bujumbura, Burundi Wednesday, June 10, 2020. Burundi's government said Tuesday, June 9, 2020 that President Pierre Nkurunziza had died of a heart attack. (Photo by Berthier Mugiraneza/AP Photo) 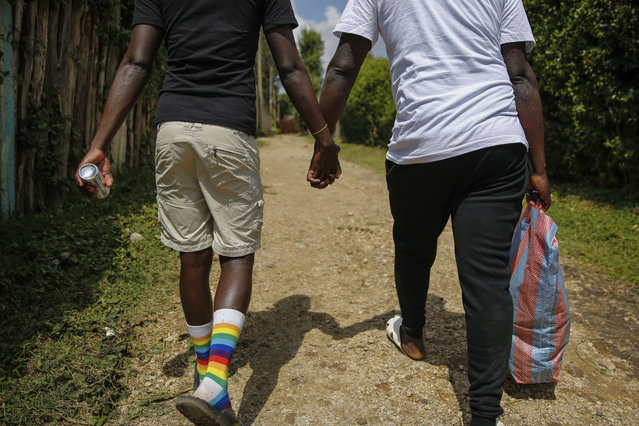 In this photo taken Thursday, June 11, 2020, gay Ugandan refugees Chris Wasswa, left, and Kasaali Brian, right, return after shopping for food in Nairobi, Kenya. Members of the LGBT community in East Africa face discrimination that has forced many to flee to Kenya, which has become a haven for them. (Photo by Brian Inganga/AP Photo) 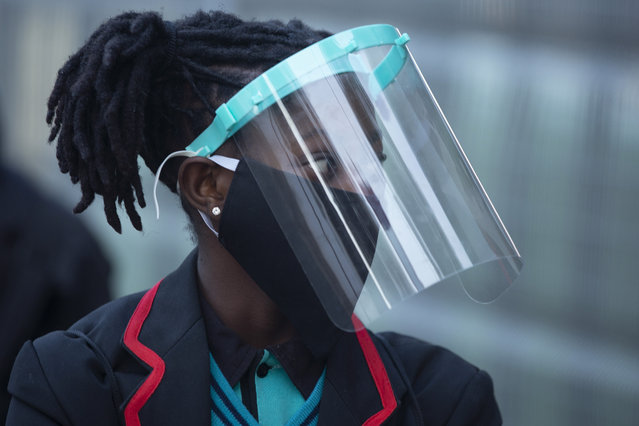 A grade 7 pupil returns to the Meldene Primary School in Johannesburg Monday, June 8, 2020. Schools were closed down almost three months ago in a bid to contain the spread of the coronavirus and have started with the return to classes of grade 7 and 12 classes under strict conditions. (Photo by Denis Farrell/AP Photo) 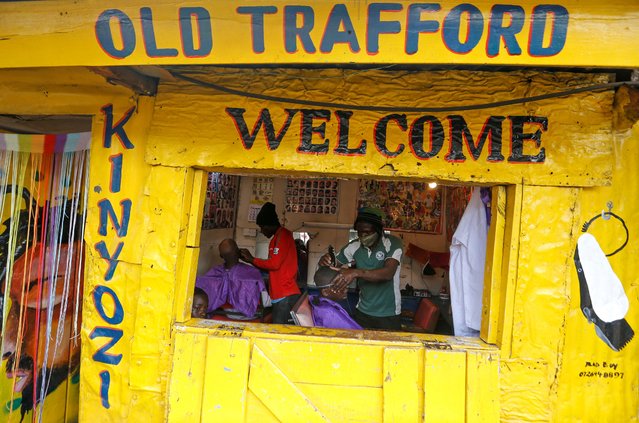 Barbers shave their clients inside their barbershop named Old Trafford amid the spread of the coronavirus disease (COVID-19) within the Kibera slum in Nairobi, Kenya on June 7, 2020. (Photo by Thomas Mukoya/Reuters) 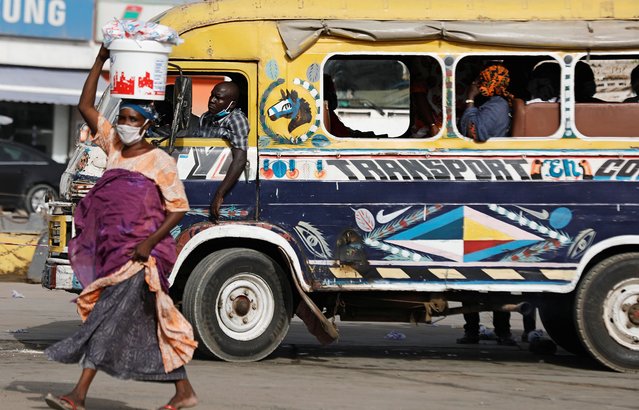 A street vendor walks past a driver waiting for passengers to occupy his bus called “Car Rapide”, amid the outbreak of the coronavirus disease (COVID-19), at a bus station in Dakar, Senegal, June 24, 2020. (Photo by Zohra Bensemra/Reuters) 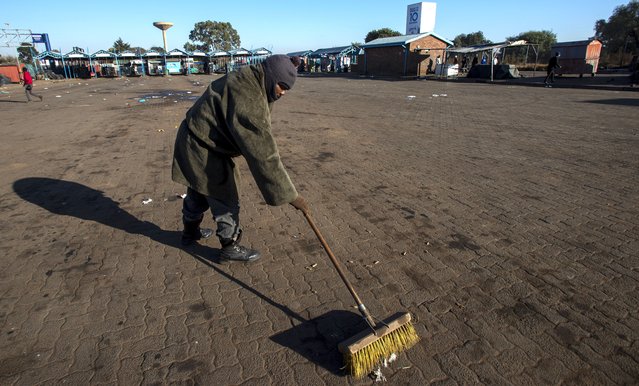 A worker sweeps the floor at a taxi rank in Katlehong, South Africa, Monday, June 22, 2020, as taxi drivers affiliated to the SA National Taxi Council (Santaco) protested against what it believes to be insufficient government relief offered to the industry. South Africa’s largest city, Johannesburg, has been hit by a strike by mini-bus taxis, preventing many thousands of people from getting to work on Monday, as the country reopens its economy even as cases of COVID-19 are increasing. (Photo by Themba Hadebe/AP Photo) 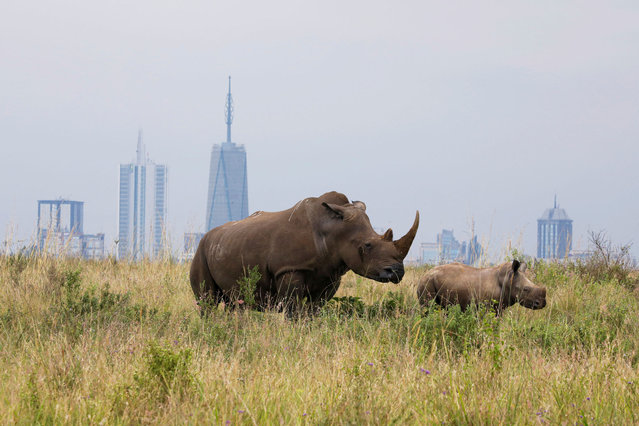 A southern white rhino and her calf are seen inside the Nairobi National Park with the Nairobi skyline in the background, in Kenya, June 15, 2020. (Photo by Baz Ratner/Reuters) 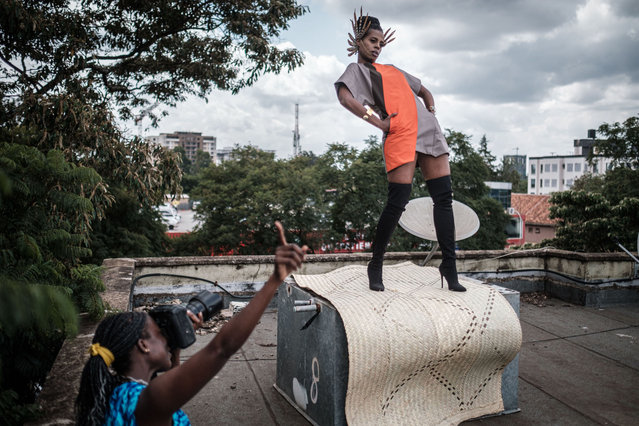 Kenyan photographer and art director Barbara Minishi (L) takes pictures of her room mate and fashion stylist Wambui Thimba (R) wearing a creation by a Kenyan fashion designer on the rooftop of their apartment in Nairobi, Kenya, on June 1, 2020. After their scheduled works was cancelled due to the spread of the COVID-19 coronavirus, Minishi and Thimba have started their own project called “the Kenya Fashion & Style Diary in 21 days” to showcase a Kenyan fashion brand everyday for 3 weeks on social networking services since May 22, 2020 by only shooting at their apartment. (Photo by Yasuyoshi Chiba/AFP Photo)
Edit Del
03 Jul 2020 00:05:00, post received 0 comments
Publication archive:
←   →
Popular tags:
All tags
Last searches: