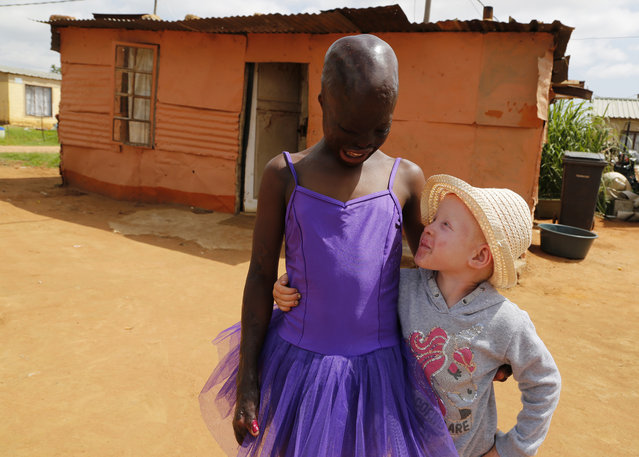 In this photo taken Sunday, January 6, 2019, 11-year-old burn victim Perlucia Mathebule, left, and her 4-year-old sister, Buhle who has albinism, pose for a photograph outside their one-room shack in Ekangala, South Africa, where the two are spending rare time with one another during the school holidays. Perlucia was badly burned at the age of 6 months and Buhle was born with albinism. (Photo by Denis Farrell/AP Photo) 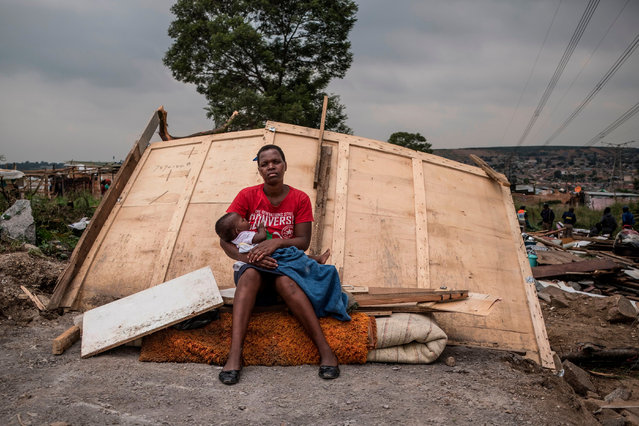 Sihle Moyo, 24, originally from Zimbabwe, is pictured with her 9-month-old baby Prudence in front of what used to be a wall of their home in Johannesburg's Swetla informal settlement, after it was demolished by police on February 08, 2019. Prudence manages to get people to help her build this home where she lived alone with her baby after her boyfriend found another woman and made her leave their home in Diepsloot. Her mother is back home in Zimbabwe but she says that there is no future there with the poverty. She is not sure what she will do now. Marlboro Gardens residents who live close by protested that the settlement is causing an unsafe environment for them. (Photo by Gulshan Khan/AFP Photo) 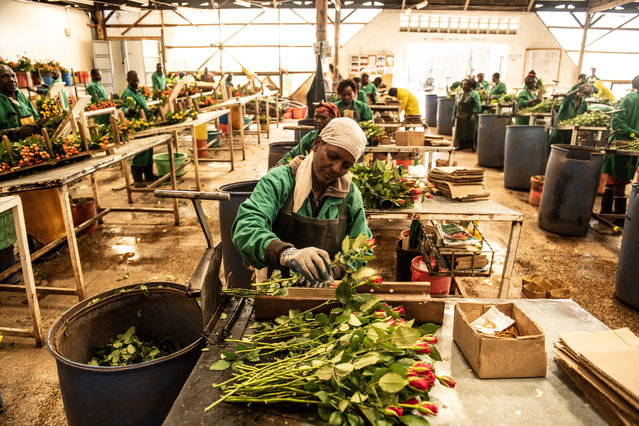 A worker cleans and packages roses at Wildfire Flowers on February 12, 2019 in Naivasha, Kenya. Kenya is the lead third-country supplier of roses to the European Union, where it accounts for 38% of the market share, according to the Kenya Flower Council, an industry group. Approximately 50% of its exported flowers are sold at auctions in the Netherlands, the source of most of Europe’s Valentine’s Day bouquets. Kenya’s floriculture industry earned more than $800 million in 2017, providing employment to over 100,000 people in the country, according to industry data. (Photo by Andrew Renneisen/Getty Images) 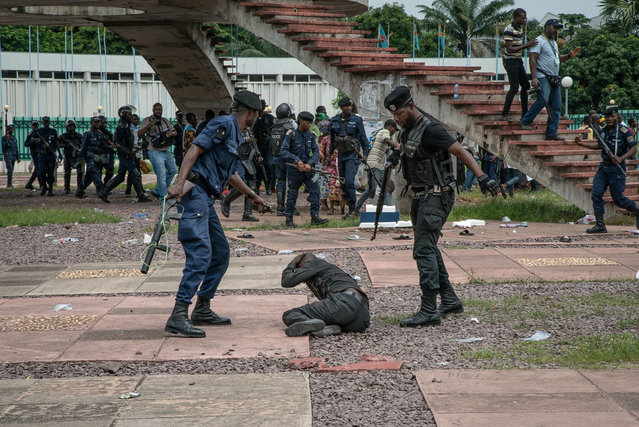 A supporter of Congolese presidential candidate Martin Fayulu protect himself as policemen close on him outside the Constitutional Court in Kinshasa on January 12, 2018 as the opposition candidate filed an appeal to impose a recount of the votes in the presidential election following a suspicion of fraud. (Photo by Caroline Thirion/AFP Photo) 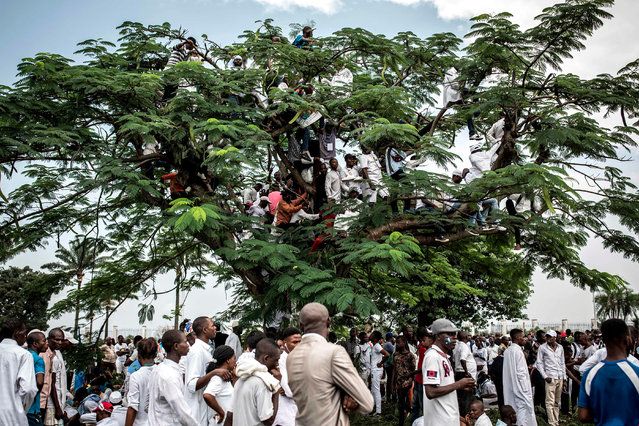 Supporters of new elected President of the Democratic Republic of Congo Felix Tshisekedi gather to attend his Presidential Inauguration on January 24, 2018 in Kinshasa. Tshisekedi took the oath of office before receiving the national flag and a copy of the constitution from outgoing president Joseph Kabila, stepping aside after 18 years at the helm of sub-Saharan Africa's biggest country, marking the country's first-ever peaceful handover of power after chaotic and bitterly-disputed elections. (Photo by John Wessels/AFP Photo) 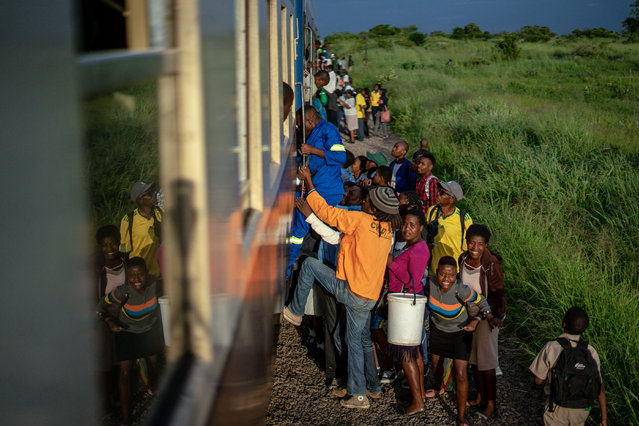 Commuters clamber aboard a train heading for the city on January 29, 2019, in Bulawayo, Zimbabwe. Zimbabwe's only commuter train is cheap and reliable -- two qualities that its passengers cherish in a downwards-spiralling economy. (Photo by Zinyange Auntony/AFP Photo) 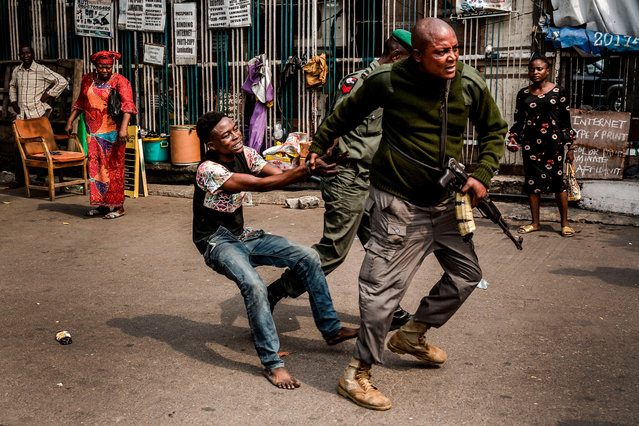 Police detain an alleged thief in Lagos' Tafawa Balewa Square where the official People's Democratic Party (PDP) opposition party is holding a rally on February 12, 2019. Nigerians will cast their ballots on February 16 in presidential and legislative elections. The presidential contest will see incumbent Muhammadu Buhari seek to win a second four-year term against former vice president Atiku Abubakar in what is expected to be a close race. (Photo by Luis Tato/AFP Photo) 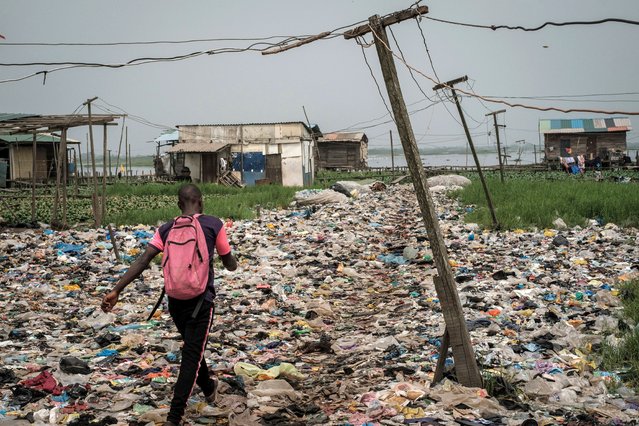 A man walks on plastic waste, used to reclaim a swamp so that the land can be developed for housing, in the Mosafejo area of Lagos on February 12, 2019. Nigeria, which elects a new president on February 16, is Africa's most populous nation and leading oil producer but is dogged by poverty and insecurity. (Photo by Yasuyoshi Chiba/AFP Photo) 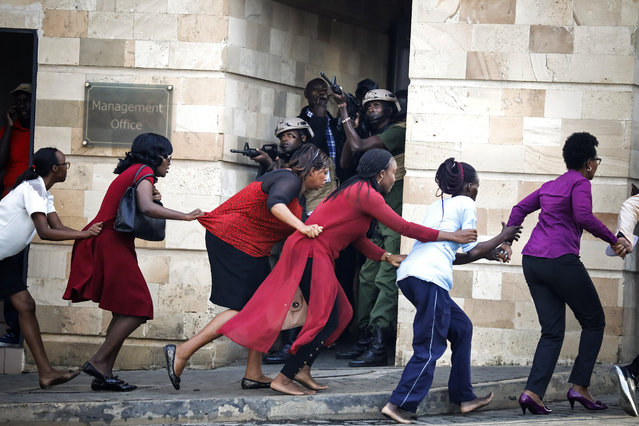 Women are evacuated out of the scene as security officers search for attackers during an ongoing gunfire and explosions in Nairobi, Kenya, 15 January 2019. According to reports, a large explosion and sustained gunfire sent workers fleeing for their lives at an upscale hotel and office complex in the Kenyan capital of Nairobi. (Photo by Dai Kurokawa/EPA/EFE) 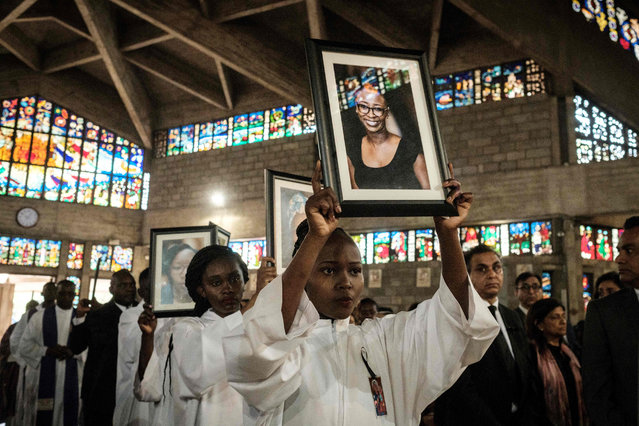 Dusit hotel and office complex employees hold portraits of their colleagues during a memorial service, on January 23, 2019, in Nairobi for six staff members of the Dusit hotel and office complex who were found dead following last week attack. At least 21 people were killed in a terror attack claimed by the Al-Qaeda-linked Somali group Al-Shabaab on the Dusit hotel complex in Nairobi on January 15, which ended after an almost 20-hour siege in which hundreds of civilians were rescued, and the five attackers killed. (Photo by Yasuyoshi Chiba/AFP Photo) 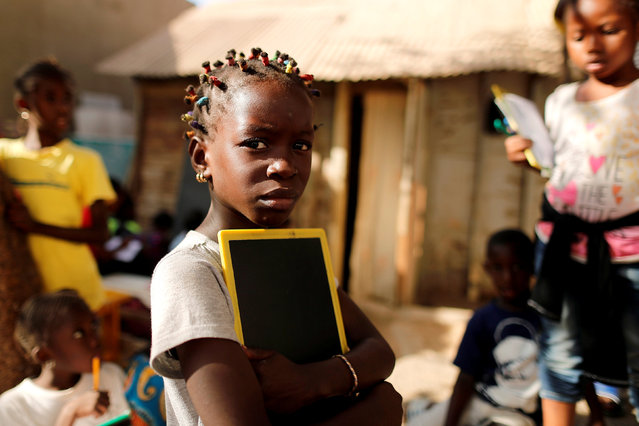 A girl holds her chalkboard as she arrives to attend lessons at the evening school in Ouakam neighbourhood, Dakar, Senegal January 16, 2019. (Photo by Zohra Bensemra/Reuters) 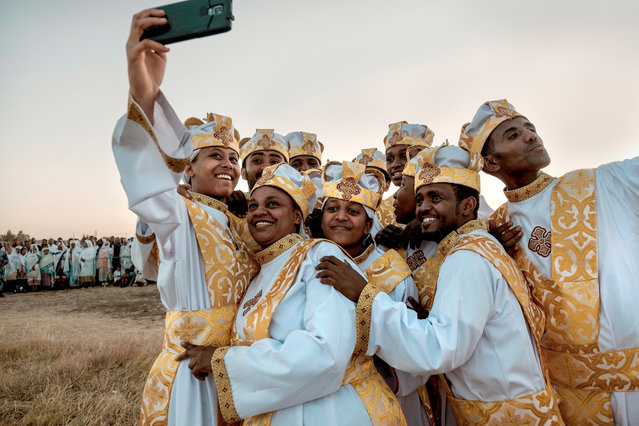 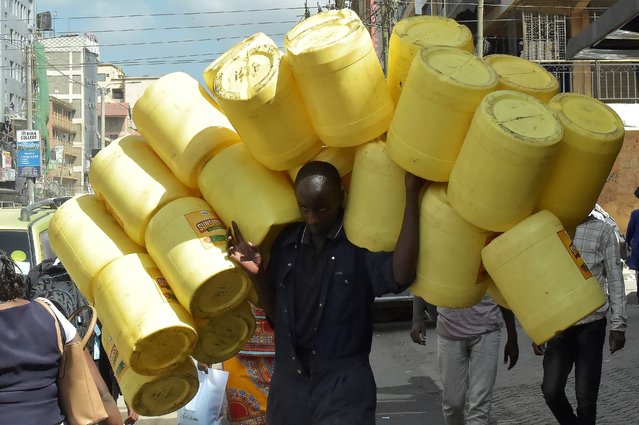 A man carries empty jerry cans in the Somali neighbourhood of Eastleigh in Nairobi, on January 18, 2019. (Photo by Simon Maina/AFP Photo) 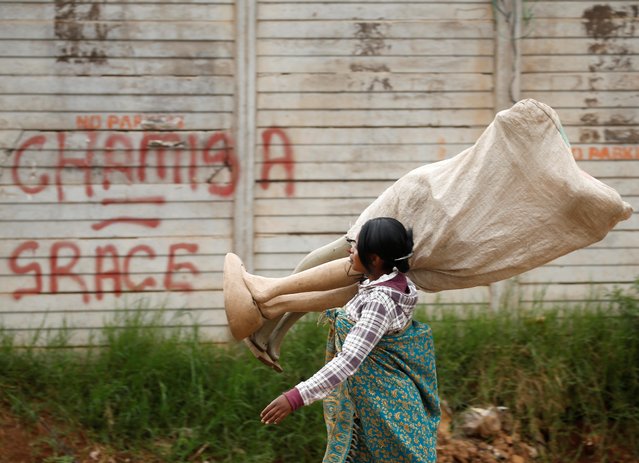 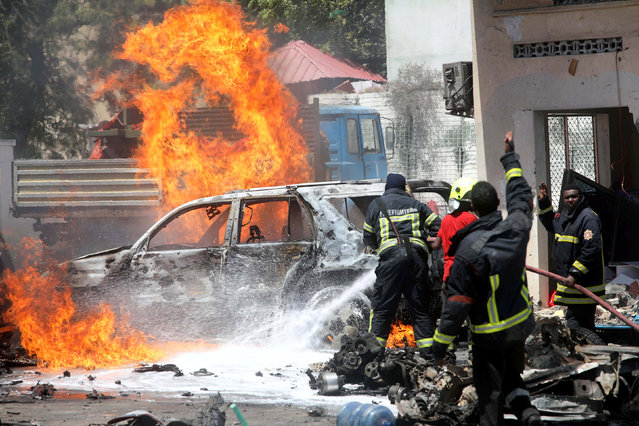 Somali firemen try to extinguish burning cars at the scene where a car bomb exploded in front of a restaurant in Mogadishu, Somalia on January 29, 2019. (Photo by Feisal Omar/Reuters) 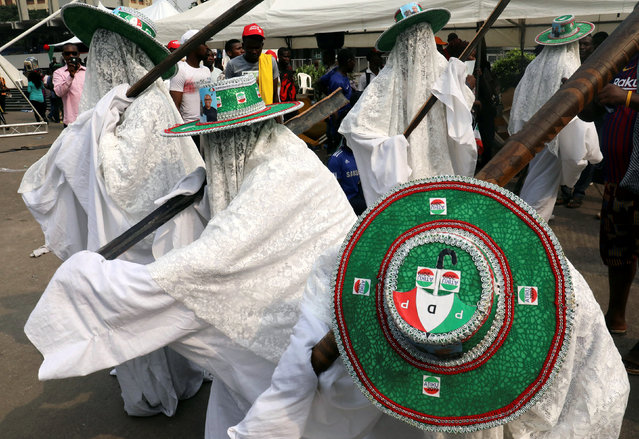 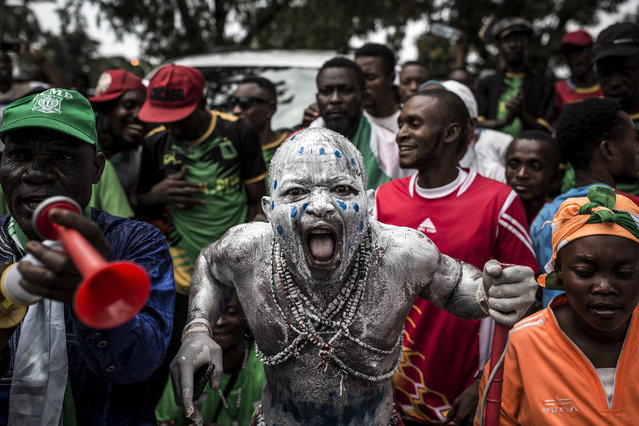 Supporters of newly elected President of the Democratic Republic of Congo Felix Tshisekedi cheer as they arrive to attend his Presidential Inauguration on January 24, 2018 in Kinshasa. Tshisekedi took the oath of office before receiving the national flag and a copy of the constitution from outgoing president Joseph Kabila, stepping aside after 18 years at the helm of sub-Saharan Africa's biggest country, marking the country's first-ever peaceful handover of power after chaotic and bitterly-disputed elections. (Photo by John Wessels/AFP Photo) 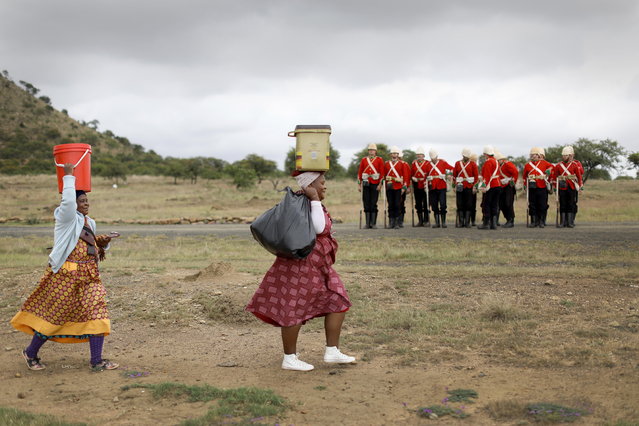 Members of a re-enactment group perform as British Soldiers as local women walk by during the 140th anniversary re-enectment of the Battle of Isandluana in Dundee, South Africa, 25 January 2019. The battle happened during the Anglo-Zulu Wars in 1879 and was the first between the Zulu nation and the British. 20,000 Zulu's attacked 1,800 British soldiers. The Zulu's ultimately overwelmed the British and won the battle. (Photo by Kim Ludbrook/EPA/EFE) 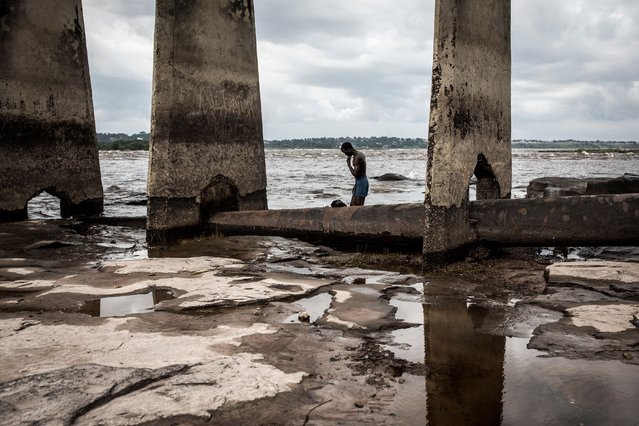 A man stands the banks of the Congo River on January 18, 2019 in Kinshasa, Democratic Republic of the Congo. (Photo by John Wessels/AFP Photo) 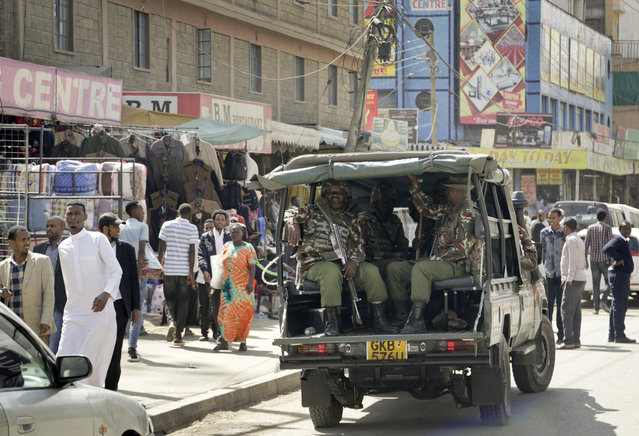 Kenyan police make a routine patrol in the Eastleigh area of the capital Nairobi, Kenya, Friday, January 18, 2019. Extremists stormed a luxury hotel complex in Kenya's capital on Tuesday, setting off explosions and gunning down people at cafe tables in an attack claimed by militant group al-Shabab. (Photo by Khalil Senosi/AP Photo) 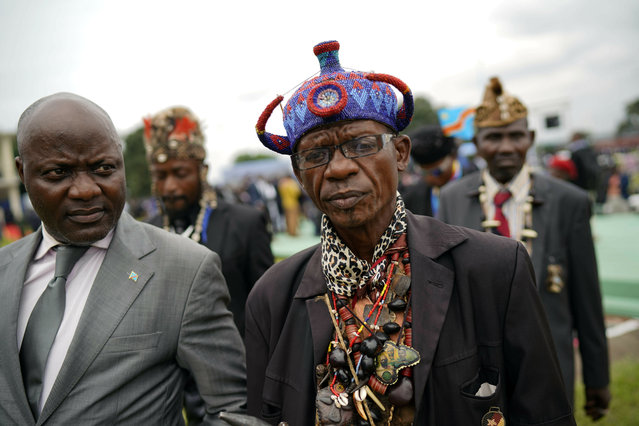