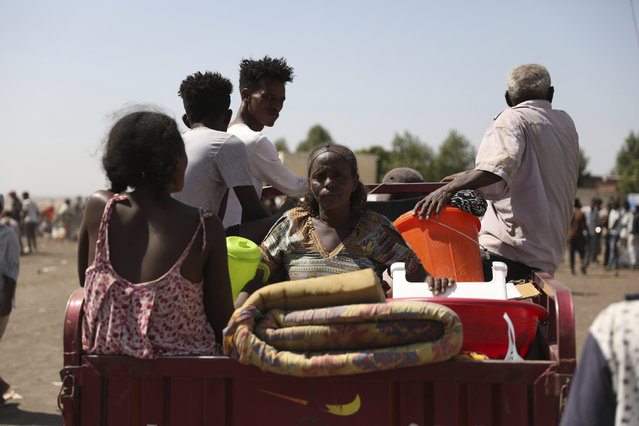 Refugees from the Tigray region of Ethiopia region arrive to register at the UNCHR center at Hamdayet, Sudan on Saturday, November 14, 2020. Ethiopia’s defiant Tigray regional government has fired rockets at two airports in the neighboring Amhara region as a deadly conflict threatens to spread into other parts of Africa’s second-most populous country. (Photo by Marwan Ali/AP Photo) 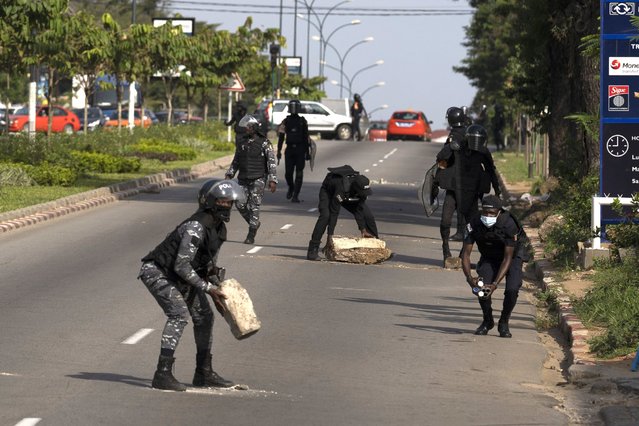 Riot police remove a barricade set up by demonstrators as they block access to the house of the former president Henri Konan Bedie, in Abidjan, Ivory Coast, Tuesday, November 3, 2020. Ivory Coast's electoral commission said Tuesday that President Alassane Ouattara had overwhelmingly won a third term in office after his two main opponents boycotted the election and called his candidacy illegal. (Photo by Leo Correa/AP Photo) 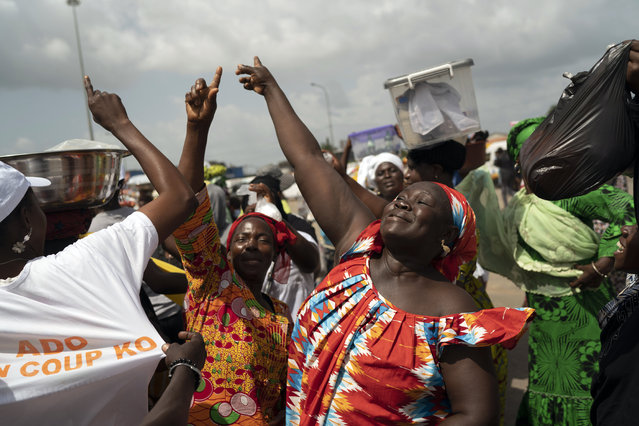 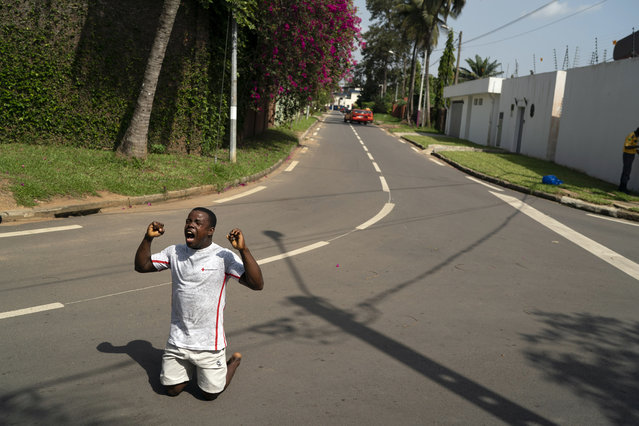 A supporter of the opposition parties shouts asking for peace as riot police are block access to the house of the former president Henri Konan Bedie, in Abidjan, Ivory Coast, Tuesday, November 3, 2020. (Photo by Leo Correa/AP Photo) 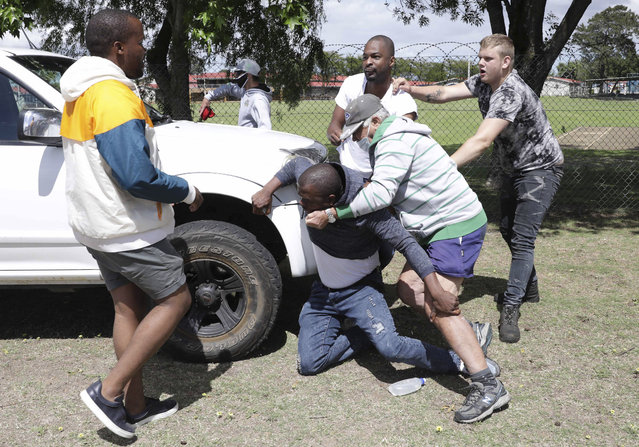 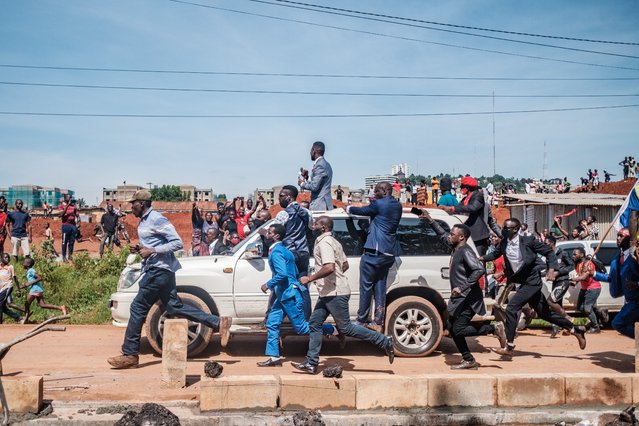 Musician turned politician Robert Kyagulanyi (C top), also known as Bobi Wine, greets supporters as he makes his way to be officially nominated as presidential candidate, in Kampala, Uganda on November 03, 2020. Bobi Wine was officially nominated today as presidential candidate for the upcoming 2021 elections, where he will challenging President Yoweri Museveni, who has been in power for 35 years. (Photo by Sumy Sadurni/AFP Photo) 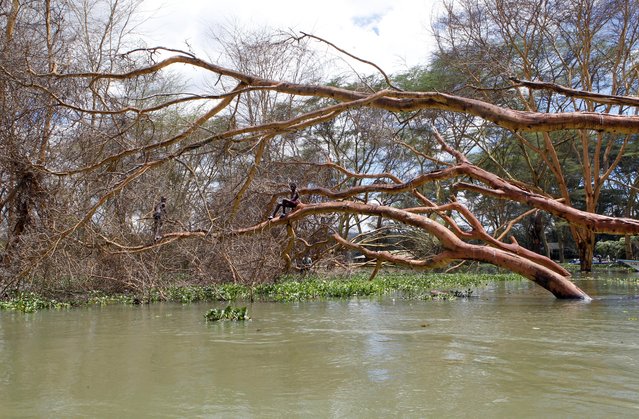 Boys are seen on a fallen tree after the water levels at Lake Naivasha bulged to record high, pushing hundreds of people from surrounding farms around Naivasha town within Nakuru county, Kenya on November 8, 2020. (Photo by Monicah Mwangi/Reuters) 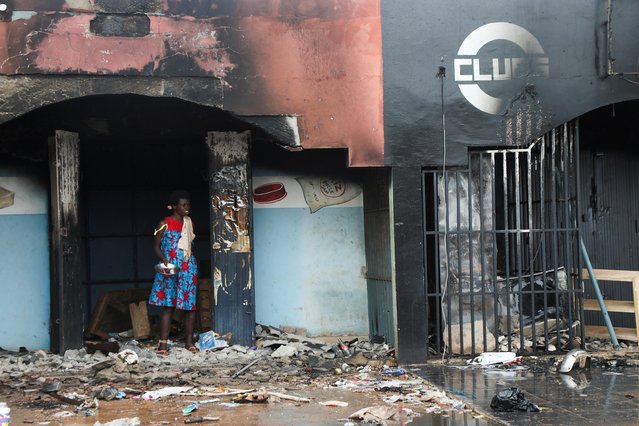 A woman stands near the rubble of a burnt store after post electoral inter-community clashes on Monday and Tuesday, in M'Batto, Ivory Coast on November 12, 2020. (Photo by Luc Gnago/Reuters) 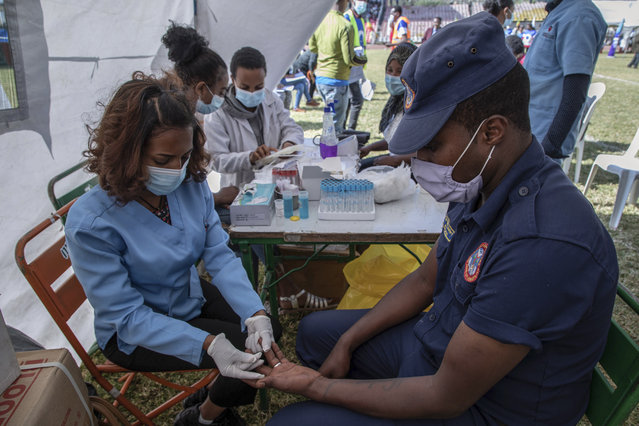 A city compliance official gives blood at a blood drive in support of the country's military, at a stadium in the capital Addis Ababa, Ethiopia Thursday, November 12, 2020. Rallies occurred in multiple cities in support of the federal government's military offensive against the Tigray regional government, the Tigray People's Liberation Front. (Photo by Mulugeta Ayene/AP Photo) 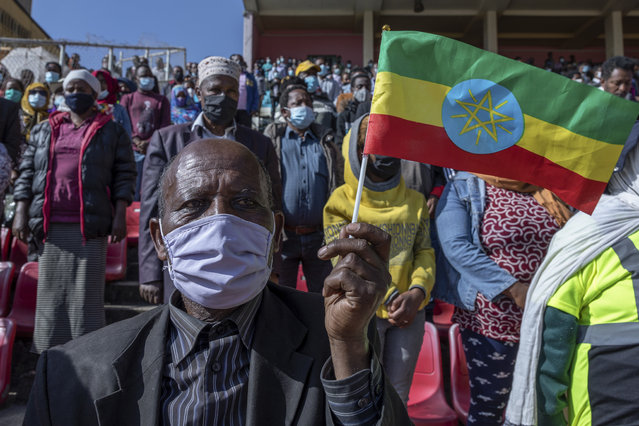 A man holds a national flag as he waits in the stands to give blood at a blood drive in support of the country's military, at a stadium in the capital Addis Ababa, Ethiopia Thursday, November 12, 2020. (Photo by Mulugeta Ayene/AP Photo) 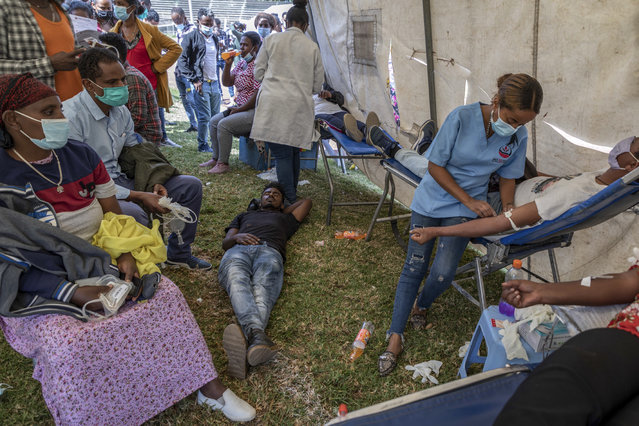 A man lies down after giving blood at a blood drive in support of the country's military, at a stadium in the capital Addis Ababa, Ethiopia Thursday, November 12, 2020. (Photo by Mulugeta Ayene/AP Photo) 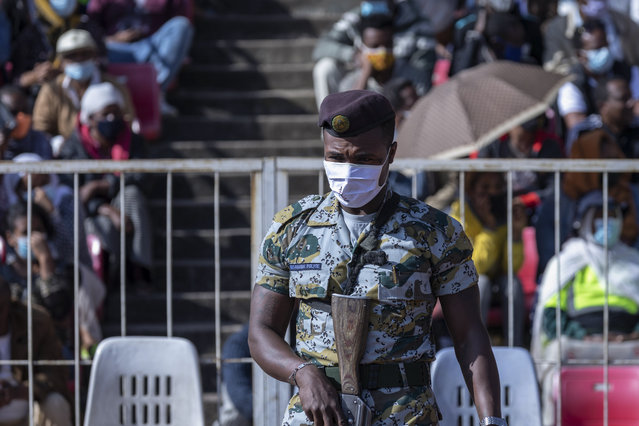 A police officer provides security as Ethiopians wait to give blood at a blood drive in support of the country's military, at a stadium in the capital Addis Ababa, Ethiopia Thursday, November 12, 2020. (Photo by Mulugeta Ayene/AP Photo) 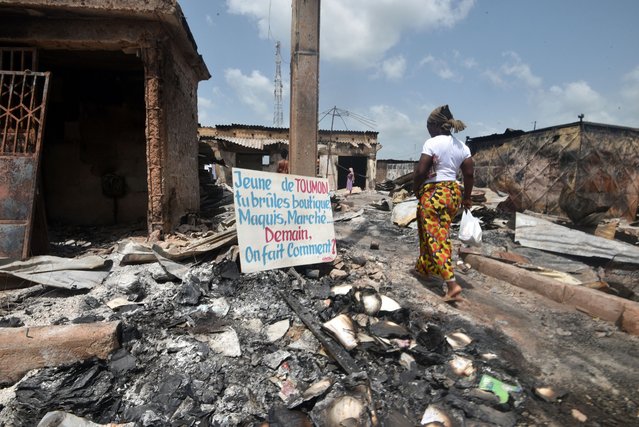 A resident walks past a sign that reads: “Youth of Toumodi you burn shops, maquis, markets . Tomorrow, how do we do?” that was placed on rubble in the market of Toumodi on November 4, 2020, during a campaign of non-violence and peace awareness by young volunteers after inter-community clashes during the country's presidential election of October 31, 2020. Ivory Coast is caught in a standoff after Ivorian President Alassane Ouattara won a third term by a landslide in October 31, 2020's vote, which was boycotted by the opposition claiming an “electoral coup” in a nation with a constitutional two-term presidential limit. (Photo by Sia Kambou/AFP Photo) 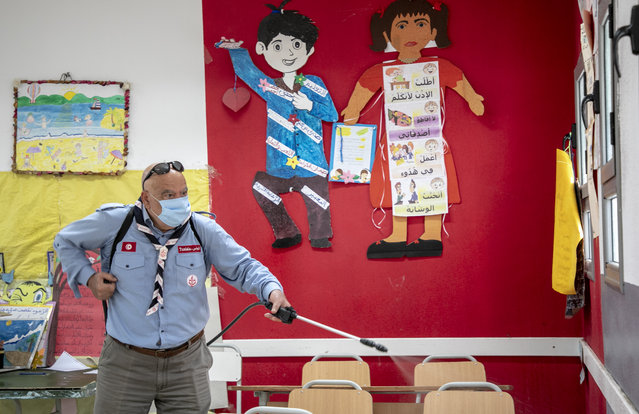 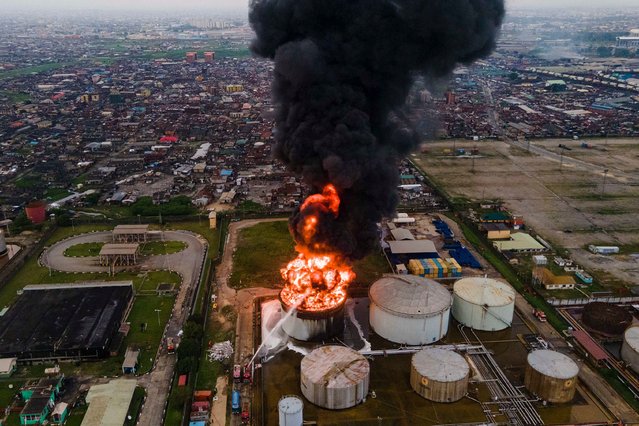 An aerial view shows an oil tanker on fire at the OVH Energy Marketing (a licensee of the Oando retail brand and ASPM Limited) in Apapa, Lagos, on November 5, 2020. The cause of the fire is still unknown at this point but the fire service is on the ground to control the fire outbreak. (Photo by Benson Ibeabuchi/AFP Photo) 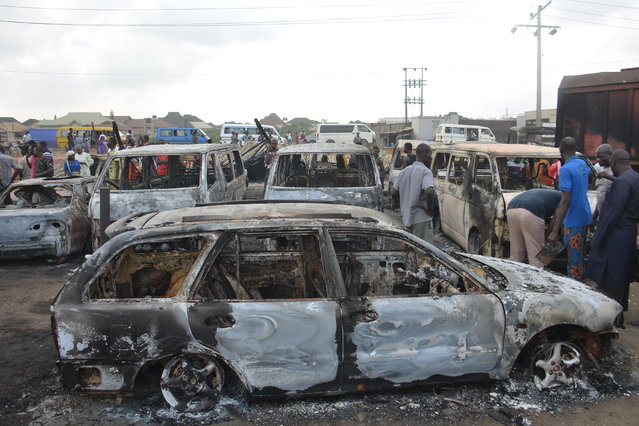 People stand next to burned cars after a tanker exploded on Lagos-Ibadan Expressway on November 7, 2020 in Ogun state killing two people in a huge blaze. Multiple vehicles were engulfed in a fire that started on Saturday morning along the Kara Bridge section of the Lagos-Ibadan Expressway, The incident led to heavy traffic on that section of the expressway on Saturday morning. (Photo by Olukayode Jaiyeola/NurPhoto via Getty Images) 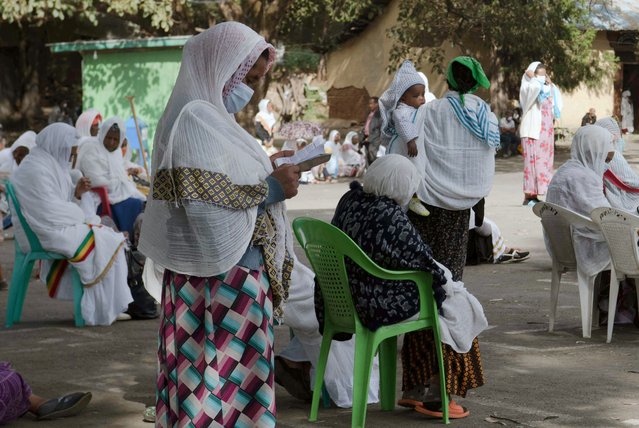 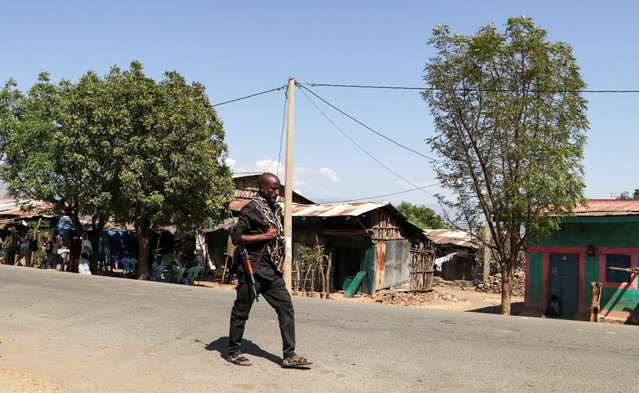 A member of the Amhara Special Force patrols a street in Soroka village in Amhara region near a border with Tigray, Ethiopia on November 9, 2020. (Photo by Tiksa Negeri/Reuters) 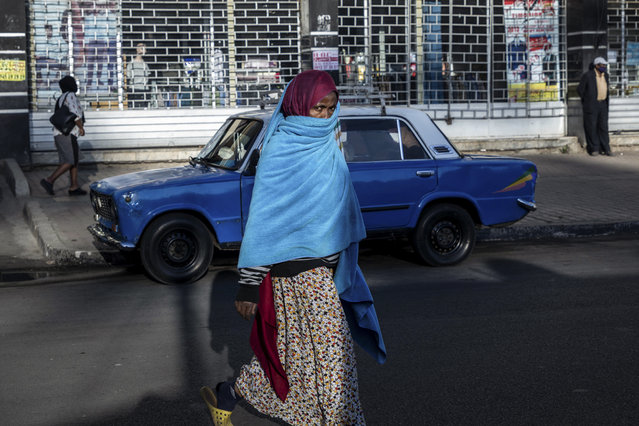 A woman walks down a street in the capital Addis Ababa, Ethiopia Friday, November 13, 2020. Tensions over the deadly conflict in Ethiopia are spreading well beyond its cut-off northern Tigray region, as the federal government said some 150 suspected “operatives” accused of seeking to “strike fear and terror” throughout the country had been detained. (Photo by Mulugeta Ayene/AP Photo) 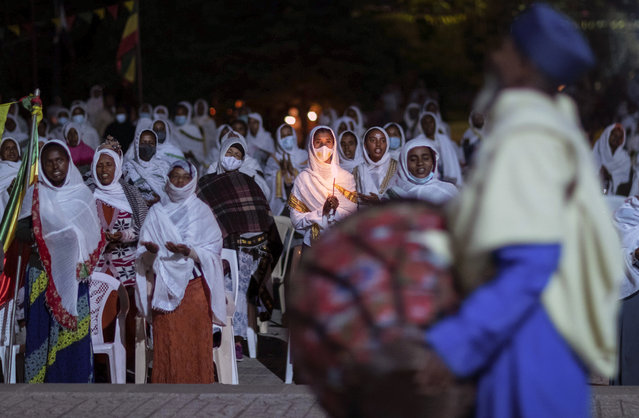 Ethiopian Orthodox Christians light candles and pray for peace during a church service at the Medhane Alem Cathedral in the Bole Medhanealem area of the capital Addis Ababa, Ethiopia Thursday, November 5, 2020. Ethiopia's powerful Tigray region asserts that fighter jets have bombed locations around its capital, Mekele, aiming to force the region “into submission”, while Ethiopia's army says it has been forced into an “unexpected and aimless war”. (Photo by Mulugeta Ayene/AP Photo)
Edit Del
20 Nov 2020 00:01:00, post received 0 comments
Publication archive:
←   →
Popular tags:
All tags
Last searches: