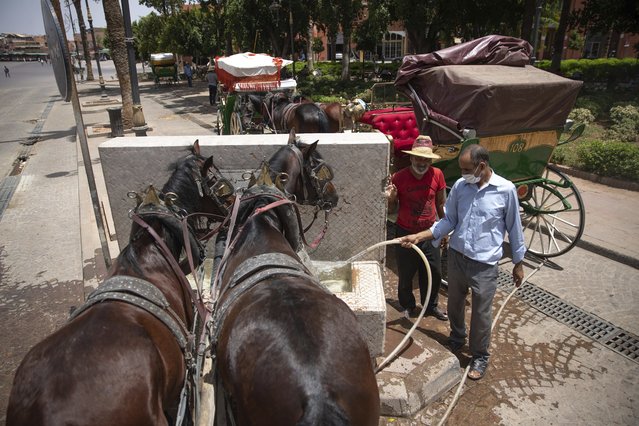 Horse-carriage owners feed their horses at a fountain as they wait for customers on a hot summer day in Marrakech, Morocco, Wednesday, July 22, 2020. (Photo by Mosa'ab Elshamy/AP Photo) 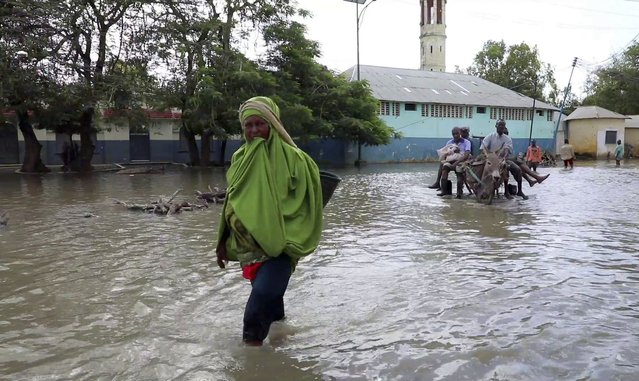 In this image made from video, residents move through floodwaters on foot and using a donkey cart in Afgoye, Somalia Sunday, August 9, 2020. Severe flooding continues to displace thousands of people in Somalia and the government in recent days has issued new warnings to communities living along the Jubba and Shabelle rivers. (Photo by AP Photo/Stringer) 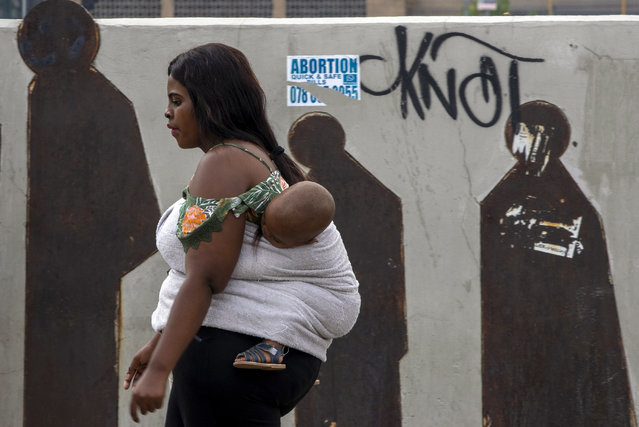 People walk along a downtown street in Johannesburg, South Africa, Monday, March 16, 2020. Millions of women and girls globally have lost access to contraceptives, abortion services and related care because of the coronavirus pandemic. Now the first widespread measure of the toll says India with its abrupt, months-long lockdown has been hit especially hard. (Photo by Themba Hadebe/AP Photo) 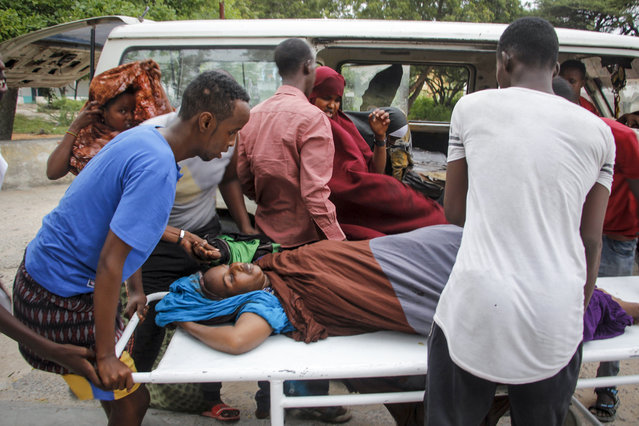 Medical workers and other Somalis help a civilian woman, who was wounded when a powerful car bomb blew off the security gates to the Elite Hotel, as she arrives at a hospital in Mogadishu, Somalia Sunday, August 16, 2020. A Somali police officer says at least 10 people have been killed and more than a dozen others injured in an ongoing siege at the beachside hotel in Somalia's capital where security forces are battling Islamic extremist gunmen who have invaded the building. (Photo by Farah Abdi Warsameh/AP Photo) 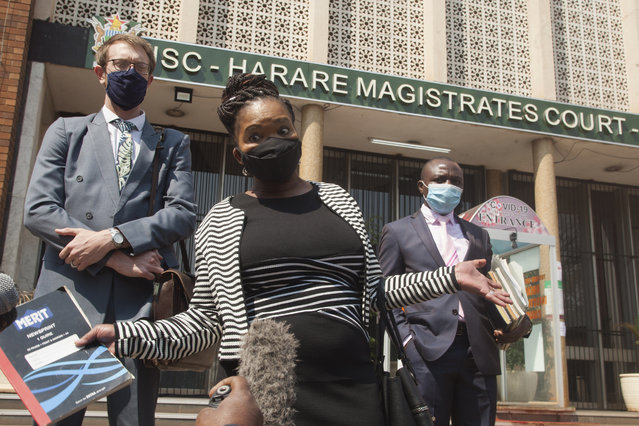 Zimbabwe Human Rights Lawyer Beatrice Mtetwa, centre, speaks to the media outside the magistrates courts in Harare, Tuesday, August 18, 2020. A Zimbabwean magistrate barred Beatrice Mtetwa, a top human rights lawyer, from representing a jailed journalist and ordered that she be prosecuted for comments posted on a Facebook page run by an American filmmaker. Magistrate Ngoni Nduna also said he will forward his ruling to the Law Society of Zimbabwe for possible further punishment of the lawyer. (Photo by Tsvangirayi Mukwazhi/AP Photo) 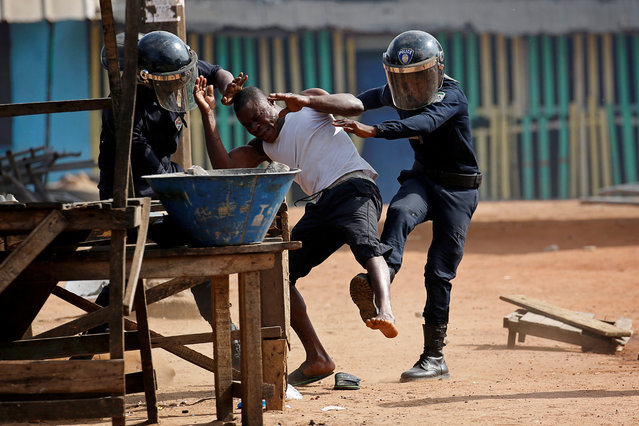 Policemen detain a demonstrator during a protest against president Alassane Ouattara's decision to stand for a third term, in Abidjan, Ivory Coast, August 13, 2020. (Photo by Luc Gnago/Reuters) 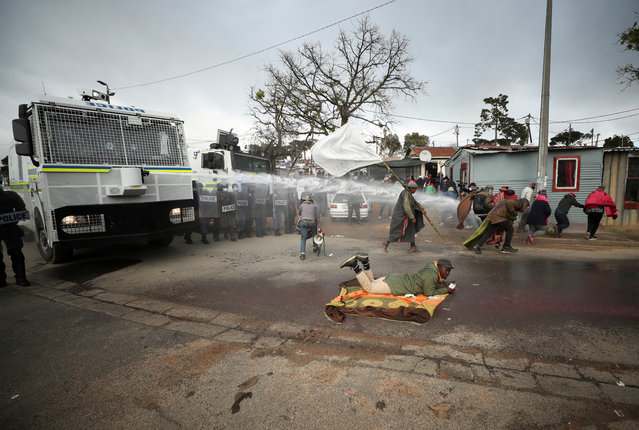 Police use a water cannon to disperse demonstrators protesting against racial and economic inequalities in Kayamandi township near Stellenbosch, South Africa, August 12, 2020. (Photo by Mike Hutchings/Reuters) 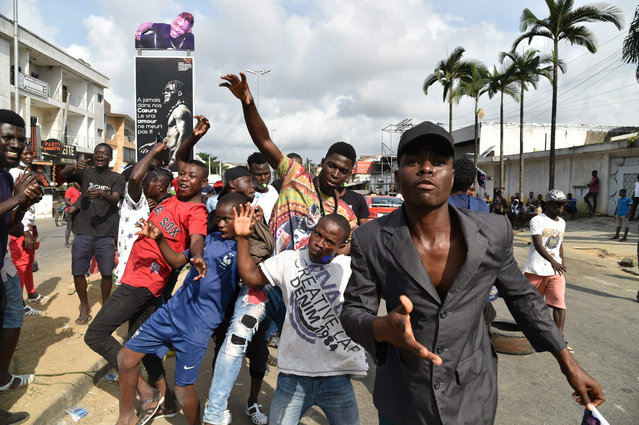 Fans of Ivory Coast's “coupé-décalé” music star DJ Arafat gesture in Abidjan on August 12, 2020, as they gather to commemorate the one year mark after the death of Ivorian music star DJ Arafat at the site where he was killed in a motorcycle accident. (Photo by Issouf Sanogo/AFP Photo) 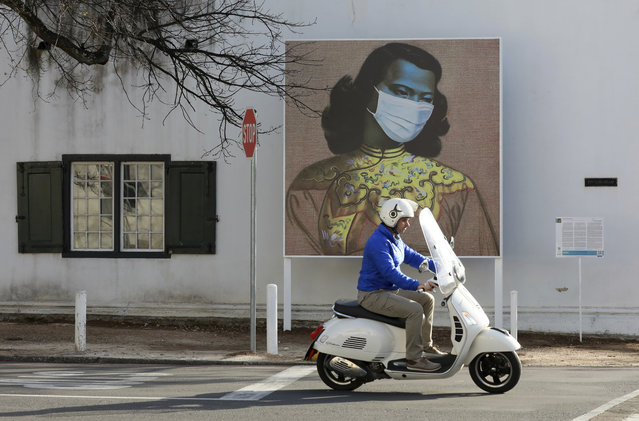 A man rides his scooter in front of a marked version of Vladimir Tretchikoff's “The Chinese Girl, The Green Lady” painting in Stellenbosch, South Africa, Thursday August 13, 2020. The public art is part of a series called Masked Masterpieces of masks superimposed on famous South African artworks to support Stellenbosch University students impacted by Covid-19. (Photo by Nardus Engelbrecht/AP Photo) 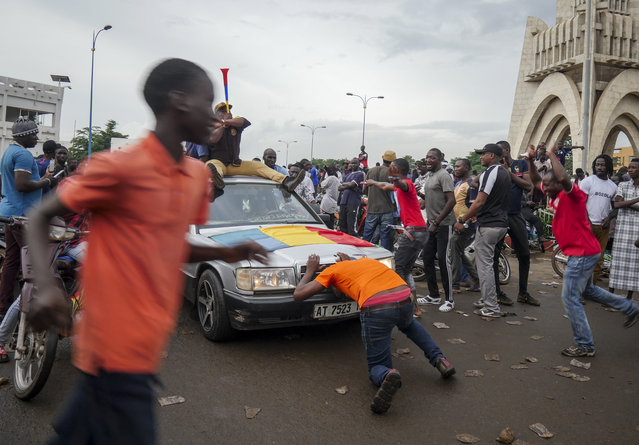 People celebrate in the streets in the capital Bamako, Mali Tuesday, August 18, 2020. Mutinous soldiers detained Mali's president and prime minister Tuesday after surrounding a residence and firing into the air in an apparent coup attempt after several months of demonstrations calling for President Ibrahim Boubacar Keita's ouster. (Photo by AP Photo/Stringer) 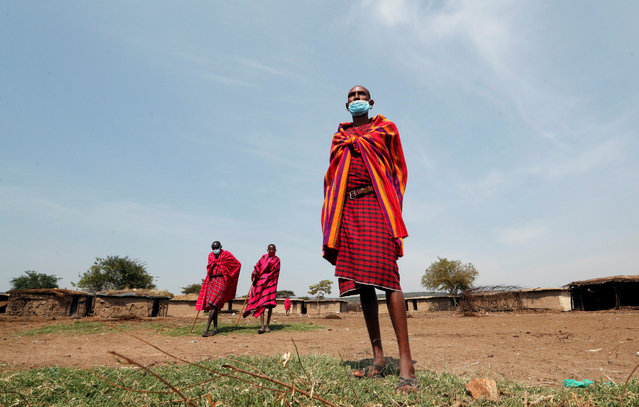 Maasai elders, wearing traditional costumes, with face masks on, due to the coronavirus disease (COVID-19) outbreak, gather at their homestead within the Orboma Manyatta in Sekenani, near the Maasai Mara game reserve in Narok County, Kenya on August 10, 2020. (Photo by Thomas Mukoya/Reuters) Police take cover as they are pelted with stones during a protest against racial and economic inequalities in Kayamandi township near Stellenbosch, South Africa, August 12, 2020. (Photo by Mike Hutchings/Reuters) 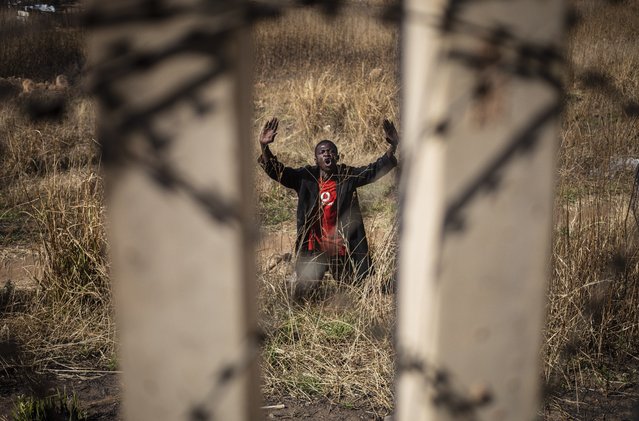 A protester kneels in front of police near the body of a dead protester during evictions by SAPS (South African Police Forces) and the Red Ants of people from blocks of flats in Soweto, South Africa, 12 August 2020. Violent clashes ensued with at least one protester dead and some others injured. Protesters claim that they have been waiting to get flats in the area for years but “foreign” residents have been getting flats, as well as blaming the government for not building enough housing. (Photo by Kim Ludbrook/EPA/EFE) 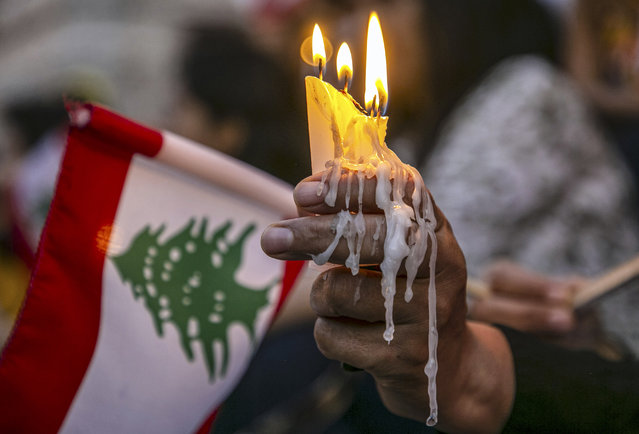 Tunisians light a candle during a demonstration in support of Lebanese people following the explosion in the port of Beirut, on August 06, 2020 in Tunis, Tunisia. (Photo by Yassine Gaidi/Anadolu Agency via Getty Images) 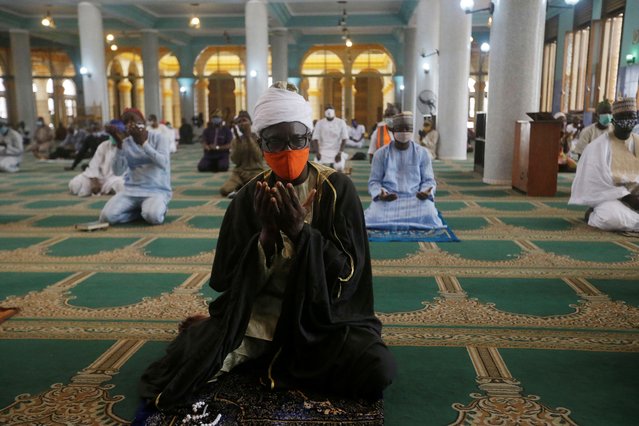 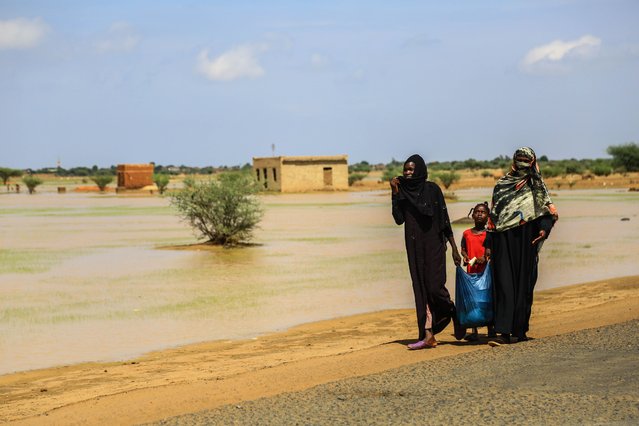 Sudanese people continue to struggle under difficult conditions in Al-Nezile village of East Nile State after the flood brought by the strong rains that were effective last week in the southeast of Khartoum, Sudan on August 08, 2020. (Photo by Mahmoud Hjaj/Anadolu Agency via Getty Images) 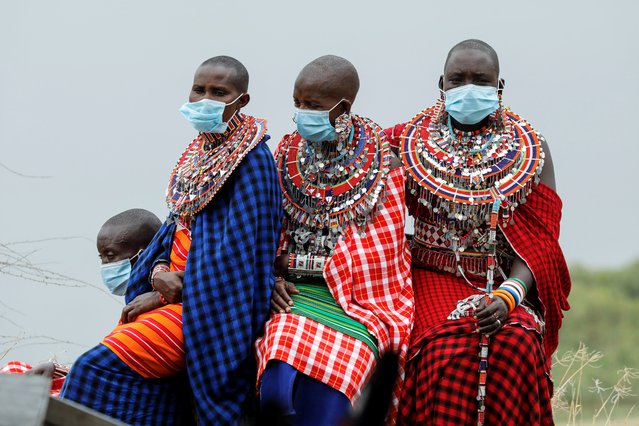 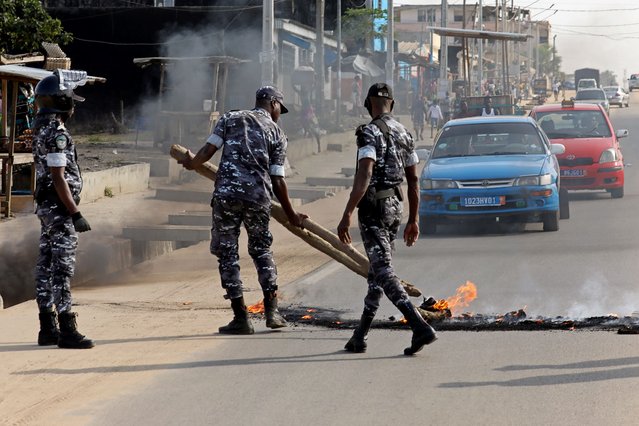 Policemen remove a barricade set on fire by demonstrators to block a road during a protest against president Alassane Ouattara's decision to stand for a third term, in Abidjan, Ivory Coast, August 13, 2020. (Photo by Luc Gnago/Reuters) 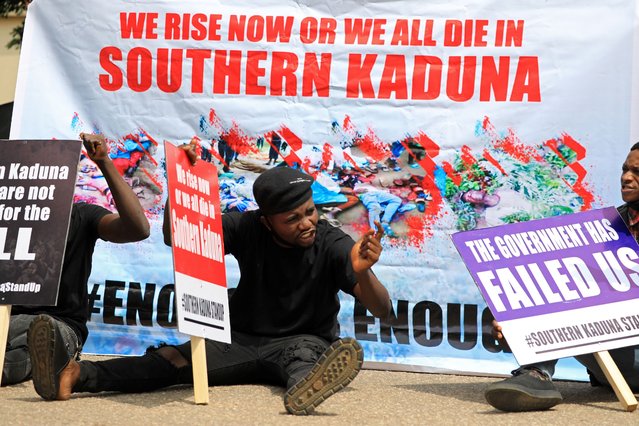 People gather to protest the incessant killings in southern Kaduna and insecurities in Nigeria, at the U.S. embassy in Abuja, Nigeria on August 15, 2020. (Photo by Afolabi Sotunde/Reuters) 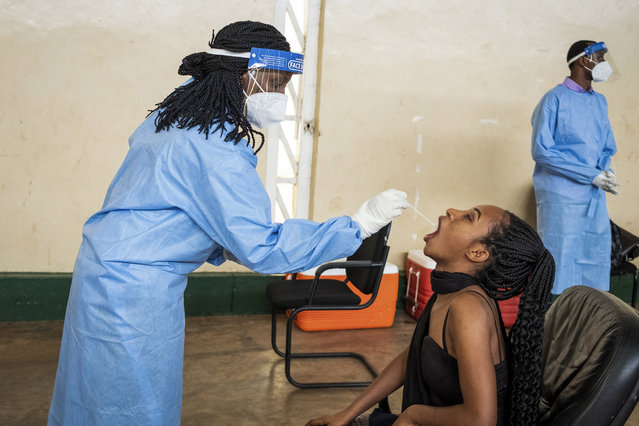 Ruth Irumva, right, is tested for COVID-19 at a testing center in the capital Kigali, Rwanda, Tuesday, July 28, 2020. Like many countries, Rwanda is finding it impossible to test each of its citizens for the coronavirus amid shortages of supplies but researchers there have created an innovative approach using an algorithm to refine the process of pooled testing that's drawing attention beyond the African continent. (Photo by AP Photo/Stringer)
Edit Del
23 Aug 2020 00:01:00, post received 0 comments
Publication archive:
←   →
Popular tags:
All tags
Last searches: