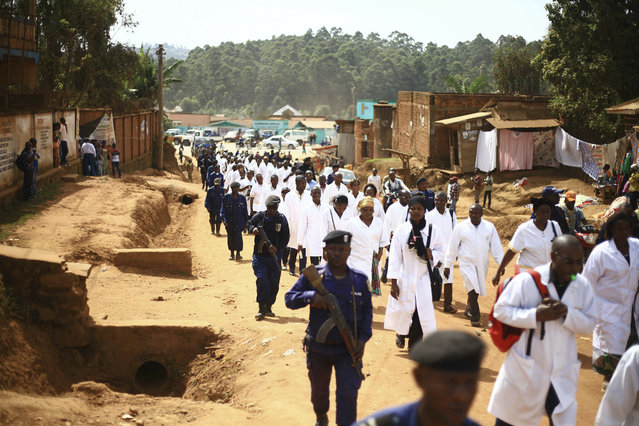 Doctors and health workers march in the Eastern Congo town of Butembo on Wednesday April 24, 2019, after attackers last week shot and killed an epidemiologist from Cameroon who was working for the World Health Organization. Doctors at the epicenter of Congo's Ebola's crisis are threatening to go on strike indefinitely if health workers are attacked again. (Photo by Al-hadji Kudra Maliro/AP Photo) 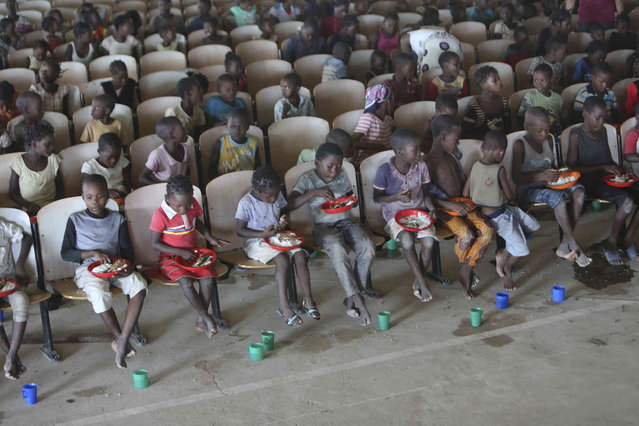 Children sit on benches in a hall after receiving food and drinking water at a temporary shelter for children in Pemba city, on the northeastern coast of Mozambique, Thursday May 2, 2019. More than 1 million children have been affected by a pair of cyclones that ripped into Mozambique in less than two months, the United Nations children's agency says, and now many of the children are without shelter or food. (Photo by Tsvangirayi Mukwazhi/AP Photo) 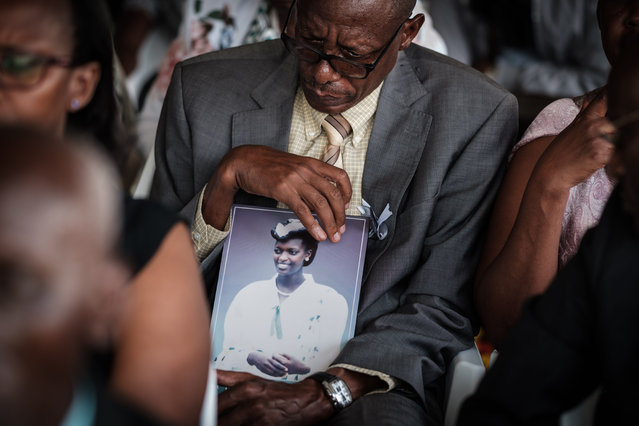 Vianney Rusanganwa, 61, holds a portrait of his late wife Liberatha Mukangira who died aged 31, during the mass funeral to bury 81 coffins containing newly discoverd remains of 84,437 victims of the 1994 genocide in the mass grave at the Nyanza Genocide Memorial, suburb of the capital Kigali, on May 4, 2019. The remains of nearly 85,000 people murdered in Rwanda's genocide were laid to rest on May 4 in a sombre ceremony in Kigali, a quarter of a century after the slaughter. (Photo by Yasuyoshi Chiba/AFP Photo) 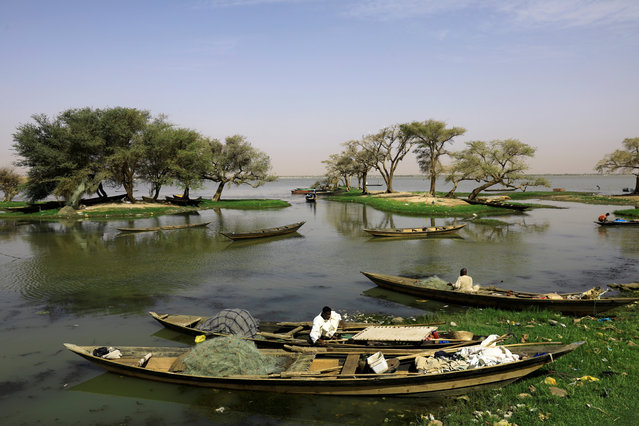 Sudanese fishermen check their boats and nets before they row through the waters of Nile River near Jebel Aulia, Sudan, May 3, 2019. (Photo by Umit Bektas/Reuters) 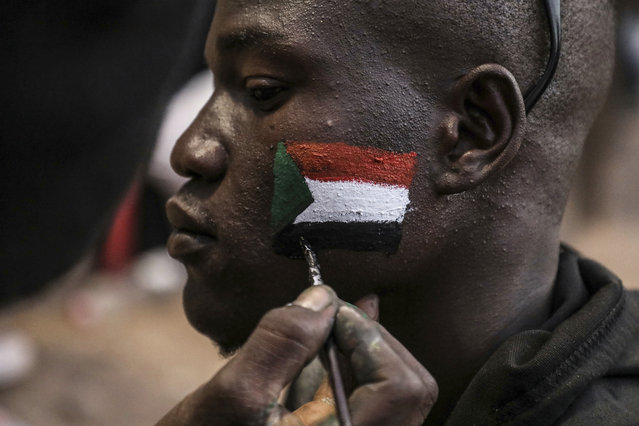 A man's face is painted as Sudanese protesters chant slogans during a rally outside the army headquarters in Sudan's capital Khartoum on Saturday, April 20, 2019. Sudan's military ousted President Omar al-Bashir following four months of street protests against his rule, then appointed a military council it says will rule for no more than two years while elections are organized. Protesters fear the army, dominated by al-Bashir appointees, will cling to power or select one of its own to succeed him. (Photo by AP Photo) 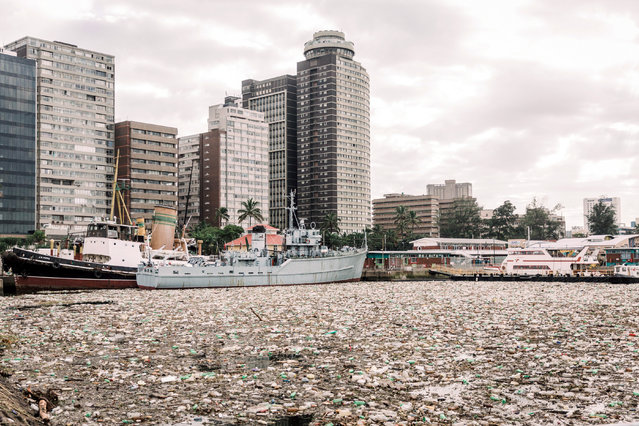 The port of Durban is swamped by tons of debris, mostly plastic and wood, on April 28, 2019. Transnet National Ports Authority (TNPA) has commenced a major clean-up to remove the large volume of waste and vegetation from the port after the recent heavy rains and flooding. Around 70 people have been killed in devastating floods in South Africa, an official said on April 25, 2019 while 1,000 people have been forced from their homes. Heavy rains have lashed the southeast of the country, tearing down homes and ravaging infrastructure in KwaZulu-Natal (KZN) and Eastern Cape provinces. The debris included large logs that posed a threat to the safe navigation of the harbour craft which are used to guide vessels safely in and around the port. Three vessels were unable to berth or sail in the Maydon Wharf precinct. Environmentalist groups, Green Peace and the Bremen-Durban Marine Environmental Education Network also weighed in, urging people to #BreakFreeFromPlastic and to take notice of where and how people dispose of their plastic waste. (Photo by Rajesh Jantilal/AFP Photo) 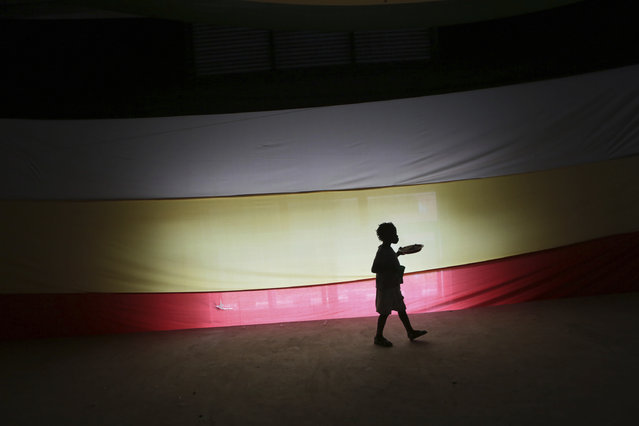 A young girl walks away after receiving a plate of food and drinking water at a temporary shelter for children in Pemba city, on the northeastern coast of Mozambique, Thursday May 2, 2019. More than 1 million children have been affected by a pair of cyclones that ripped into Mozambique in less than two months, the United Nations children's agency says, and now many of the children are without shelter or food. (Photo by Tsvangirayi Mukwazhi/AP Photo) 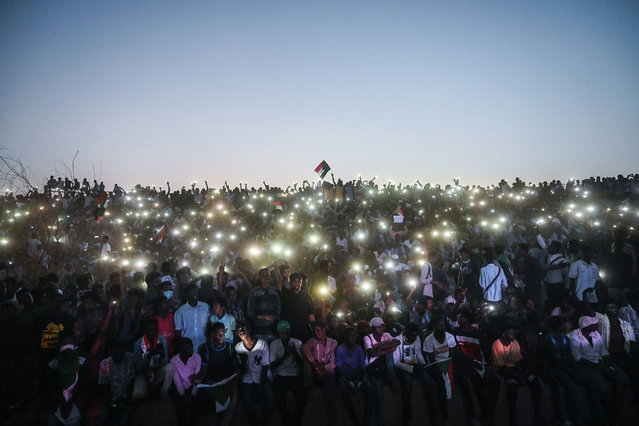 Sudanese protesters open their smartphones lights as they gather for a “million-strong” march outside the army headquarters in the capital Khartoum on April 25, 2019. Tens of thousands of protesters converged from all directions on Sudan's army headquarters after calls for a “million-strong” demonstration to demand the ruling military council cede power. (Photo by Ozan Köse/AFP Photo) 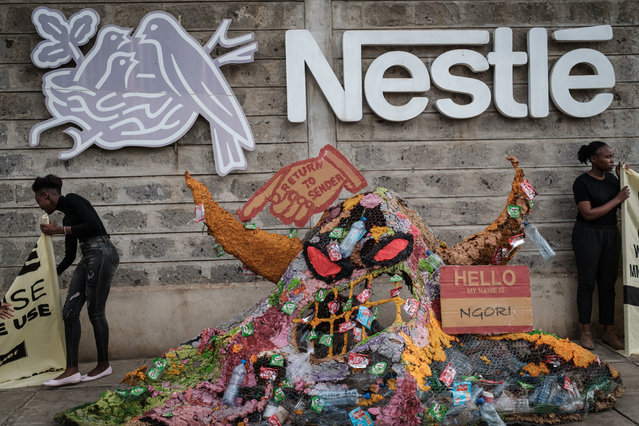 Activisits of the environmental group Greenpeace Africa protest against Swiss food giant Nestle for their single-use plastic packages next to a “plastic monster” object made with their plastic packaging, on April 16, 2019 bat the entrance of Nestle's factory in Nairobi, Kenya. According to Greenpeace Africa, last year, Nestle produced a 1.7 million tonnes of plastic packaging, nearly 300 garbage trucks worth a day.By their brand audits, Nestle was one of the top three plastic polluters in the world. (Photo by Yasuyoshi Chiba/AFP Photo) 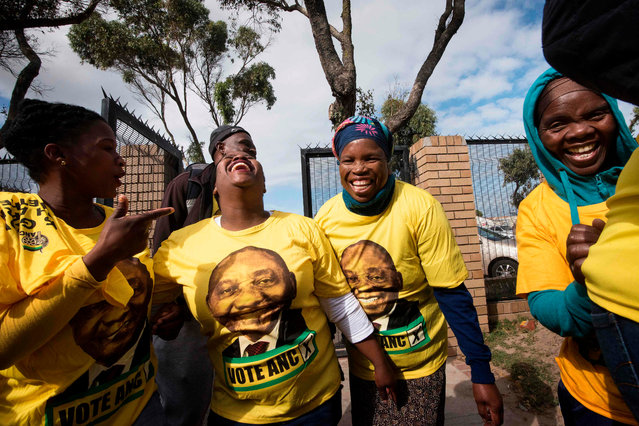 Supporters of the ruling African National Congress (ANC) wear T-shirts with portraits of South African President and president of the ruling African National Congress (ANC), Cyril Ramaphosa, before he was due to address a crowd during a campaign meeting in Mitchells Plain on May 3, 2019, in Cape Town, ahead of general elections. South African head to the polls on May 8, 2019, for general elections. (Photo by Rodger Bosch/AFP Photo) 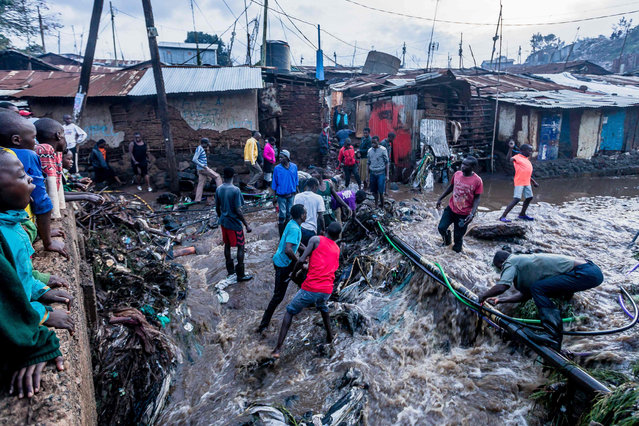 People remove debris from water hoses which deliver clean water after the rain at Kibera slum in Nairobi, on April 23, 2019. (Photo by Brian Otieno/AFP Photo) 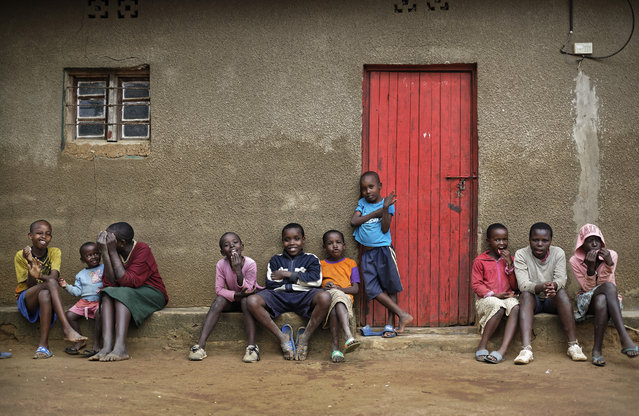 In this photo taken Thursday, April 4, 2019, the children of genocide survivors and perpetrators play together in the reconciliation village of Mbyo, near Nyamata, in Rwanda. Twenty-five years after the genocide the country has six “reconciliation villages” where convicted perpetrators who have been released from prison after publicly apologizing for their crimes live side by side with genocide survivors who have professed forgiveness. (Photo by Ben Curtis/AP Photo) 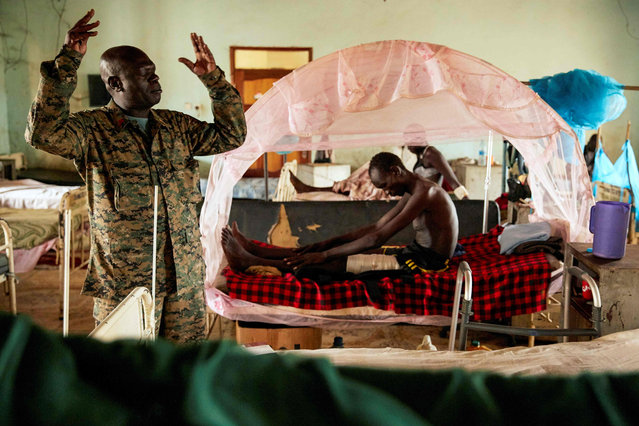 A South Sudan People's Defence Force (SSPDF) chaplain prays during a visiting to soldier at Juba Military Hospital in Juba, South Sudan, on April 27, 2019. Despite a ceasefire arrangement signed by the government and the opposition forces last year, violence or inter-ethnic fights have continued within the country. A peace deal signed in September 2018 by the parties of the country's six-year-old conflict calls for the formation of a government of national unity on May 12. (Photo by Alex McBride/AFP Photo) 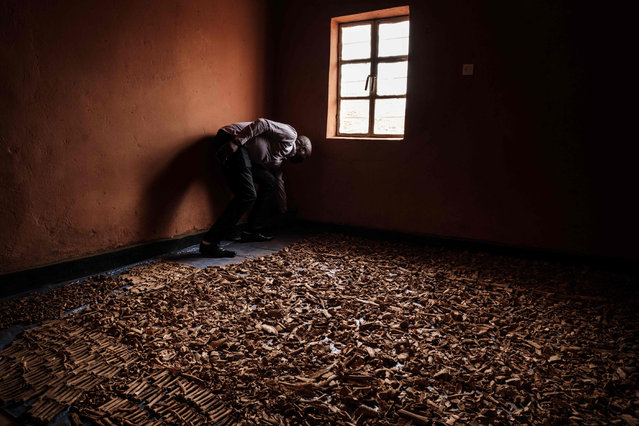 A worker stands near victims' bones recovered from pits which were used as mass grave during 1994 Rwandan genocide and hidden under houses in Kabuga, in the outskirts of Kigali, Rwanda on April 9, 2019. Rwanda on April 7, 2019 began 100 days of mourning for more than 800,000 people slaughtered in a genocide that shocked the world, a quarter of a century on from the day it began. (Photo by Yasuyoshi Chiba/AFP Photo) 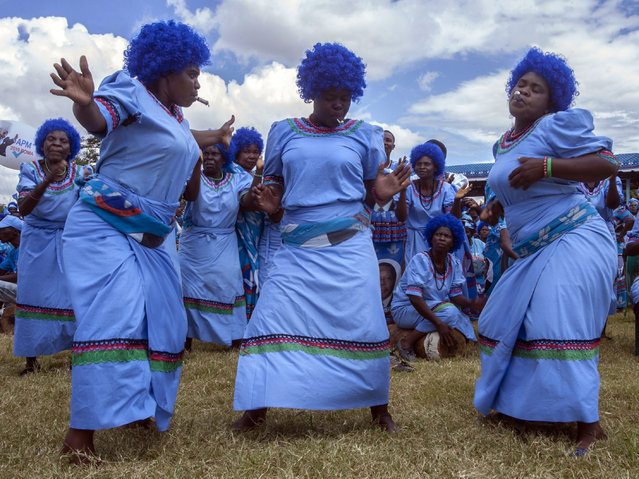 Supporters of Malawi's Democratic Progressive Party’s (DPP) ruling party dance during the official launch of its manifesto and election campaign on April 7, 2019, at Kamuzu Institute for Sports in Malawi's capital Lilongwe, ahead of next month’s elections. Mutharika, who has been in power since 2014, will face tough opposition, including from his own deputy Saulos Chilima, at the May 21 election. (Photo by Amos Gumulira/AFP Photo) 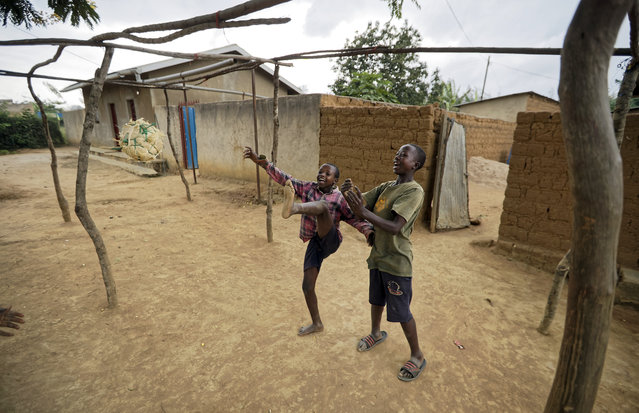 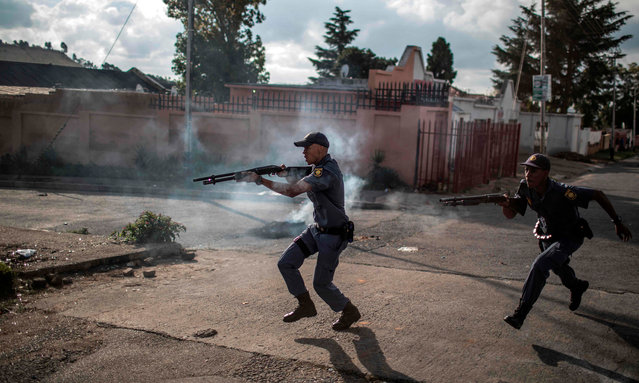 South African police officers fire rubber bullet as they chase protestors in the streets of Johannesburg, on April 23, 2019 during a protest against the lack of service delivery or basic necessities such as access to water and electricity, housing difficulties and lack of public road maintenance. - Police and protesters exchanged volleys of teargas and stones in Johannesburg on April 23, 2019 after a suburb erupted into protest over public services ahead of polls on May 8. Dozens of residents in the working class Turffontein suburb blocked the main road through ward 55, burning tyres, mattresses and tree branches over allegedly unfair allocation of nearby new social housing. (Photo by Marco Longari/AFP Photo) 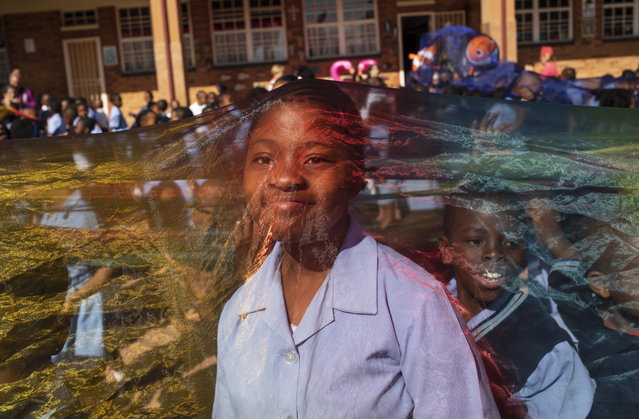 A girl from the Mayfair convent primary school is covered in cloth while the clowns show continues by Dutch clowning grooup Africlown in Johannesburg, South Africa, 03 May 2019. Once a year, Dutch clowning organization Africlowns travels to South Africa to perform clown shows for the handicapped, poor and township schools in an attempt to put a temporary smile on the faces of those watching their shows. (Photo by Kim Ludbrook/EPA/EFE) 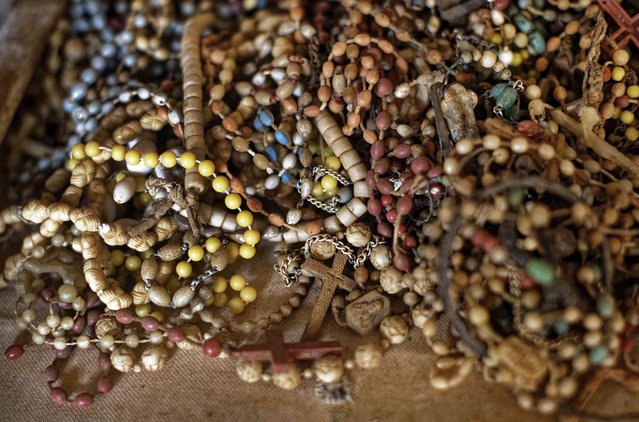 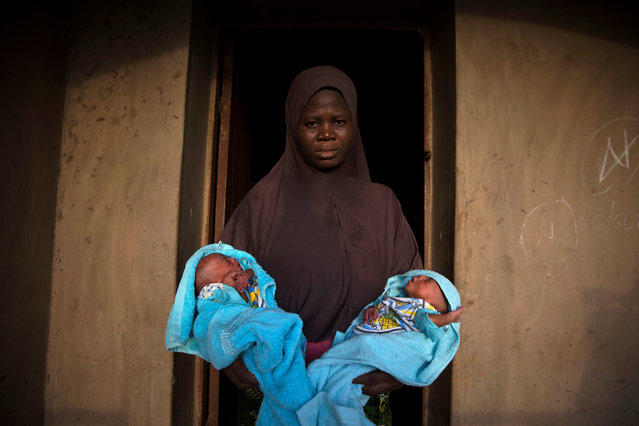