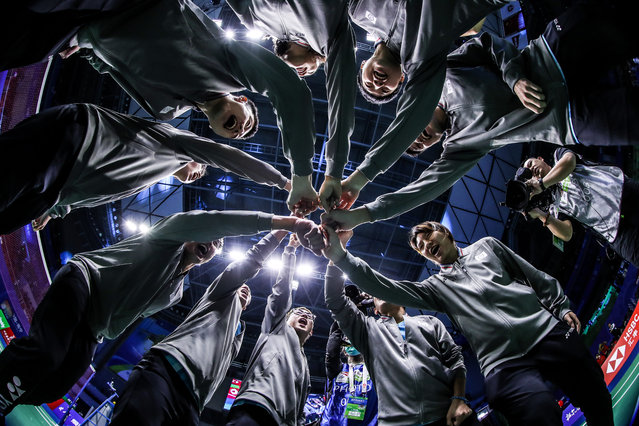 Chinese Taipei Team build a circle to cheer before the match against Team Indonesia during day six of the Sudirman Cup at Guangxi Sports Center on May 24, 2019 in Nanning, China. (Photo by Shi Tang/Getty Images) 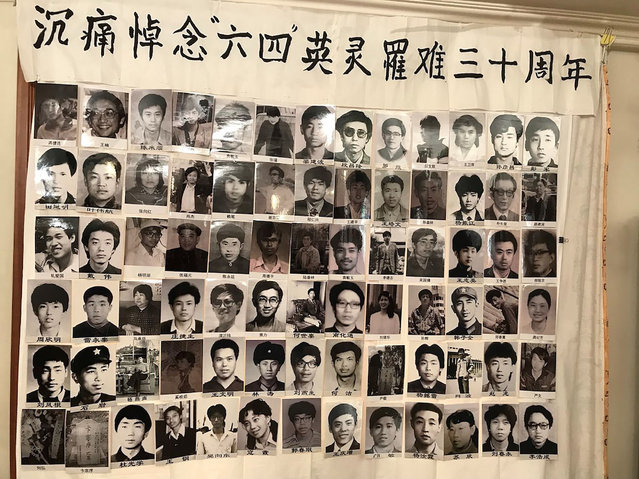 This handout photograph taken in March 2019, and released on May 29, 2019 by the Tiananmen Mothers via Human Rights in China, shows portraits of people who were killed in the June 4, 1989 crackdown on pro-democracy protests in Beijing, at a secret meeting in an undisclosed location in China. Members of the Tiananmen Mothers, a group seeking answers about the June 4, 1989 crackdown, on May 29, 2019 released a video and photos of an underground tribute for relatives who died during the brutal repression of the pro-democracy protests. The Chinese characters at top read “With deep sadness we commemorate the brave souls of June 4, who died 30 years ago”. (Photo by AFP Photo/Stringer) 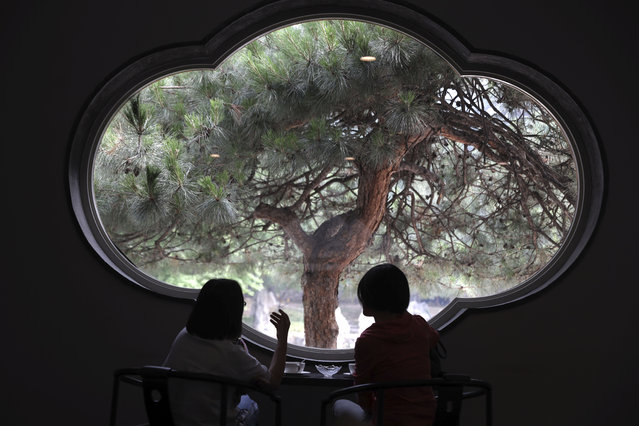 Visitors enjoy the scene from a window of the Xiangshan hotel designed by Chinese-American architect I.M. Pei and built in 1982 in Beijing, China on Friday, May 17, 2019. Pei, the globe-trotting architect who revived the Louvre museum in Paris with a giant glass pyramid and captured the spirit of rebellion at the multi-shaped Rock and Roll Hall of Fame, has died at age 102, a spokesman confirmed Thursday. (Photo by Ng Han Guan/AP Photos) 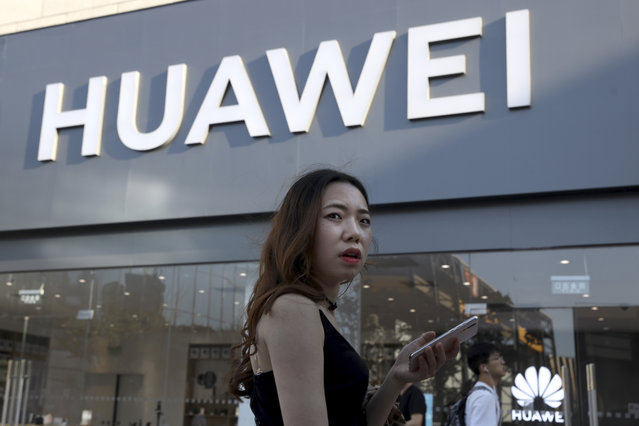 A woman uses a smartphone outside a Huawei store in Beijing Monday, May 20, 2019. Google is assuring users of Huawei smartphones the American company's services still will work on them following U.S. government restrictions on doing business with the Chinese tech giant. (Photo by Ng Han Guan/AP Photo) 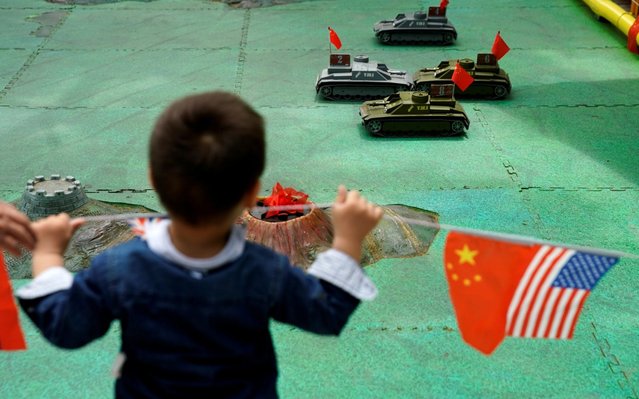 A boy looks at remote control tank toys next to the flags of China and the U.S. at a park in Shanghai, China, May 29, 2019. (Photo by Aly Song/Reuters) 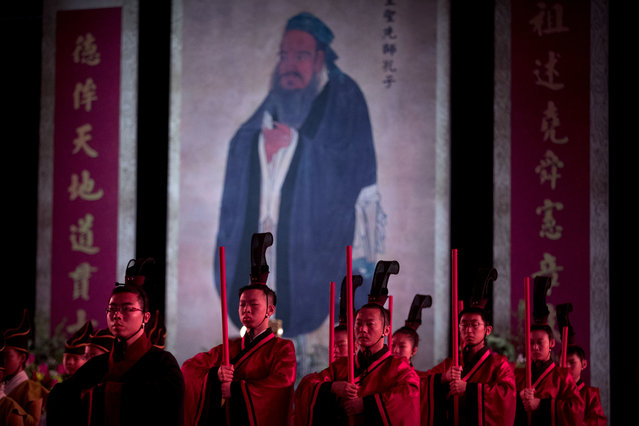 In this Sept. 28, 2016 file photo, participants in traditional dress stand near an oversized portrait of Confucius during a ceremony to observe the 2567th anniversary of his birth in Beijing. A Chinese government department announced on Monday, May 27, 2019, that China is running five-day Confucian culture immersion courses for religious leaders in the sage's hometown as part of a campaign to extend government control over faith communities through a process of sinicization. (Photo by Mark Schiefelbein/AP Photo/File) 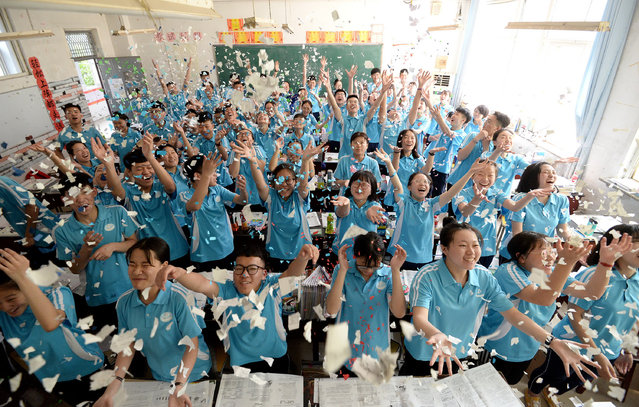 Pupils celebrate their third year of high school in Hebei province, Handan, China on May 27, 2019. (Photo by Costfoto/Barcroft Media) 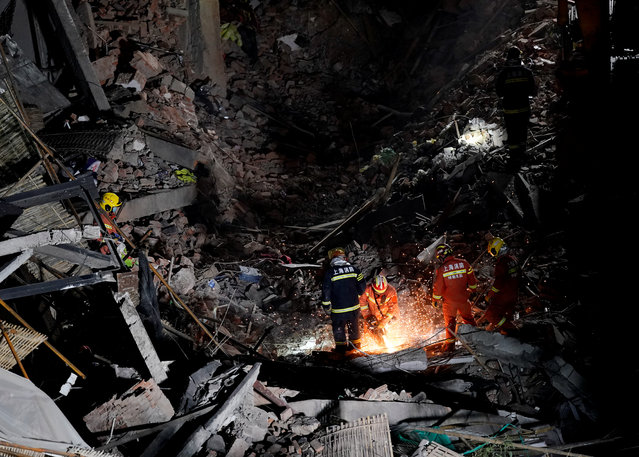 Firefighters work at the site where a building collapsed, in Shanghai, China on May 16, 2019. (Photo by Aly Song/Reuters) 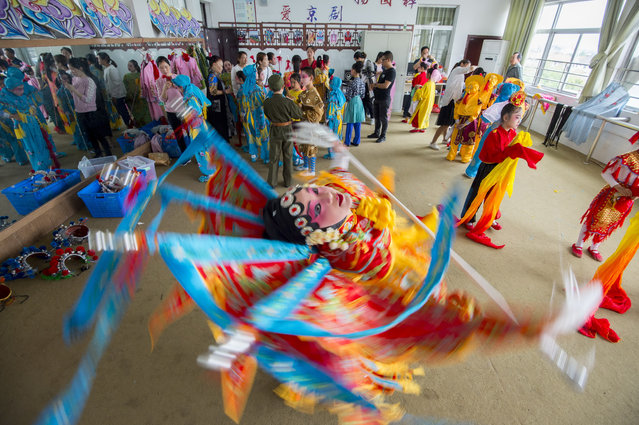 Children rehearse a dance performance in Hai’an, Jiangsu province, China on May 30, 2019. (Photo by Costfoto/Barcroft Media) 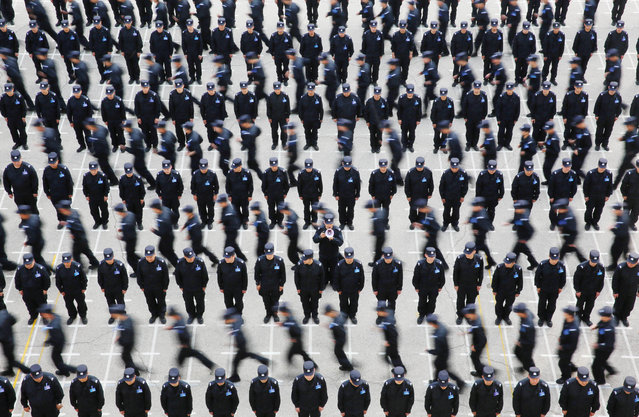 Police officers of the China Immigration Inspection take part in a training session in Shenyang, Liaoning province, China on May 20, 2019. (Photo by Reuters/China Stringer Network) 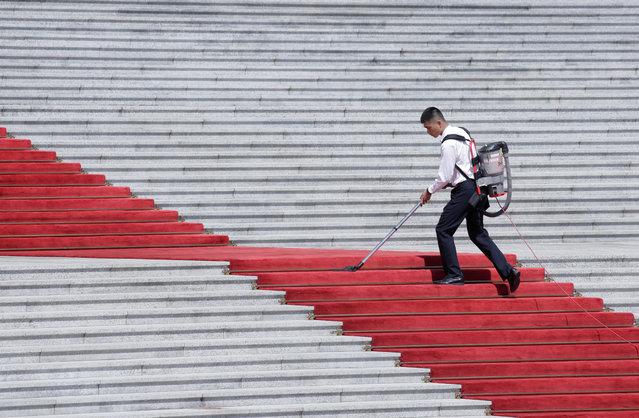 A staff member cleans the red carpet in front of the Great Hall of the People in Beijing, China, May 27, 2019. (Photo by Jason Lee/Reuters) 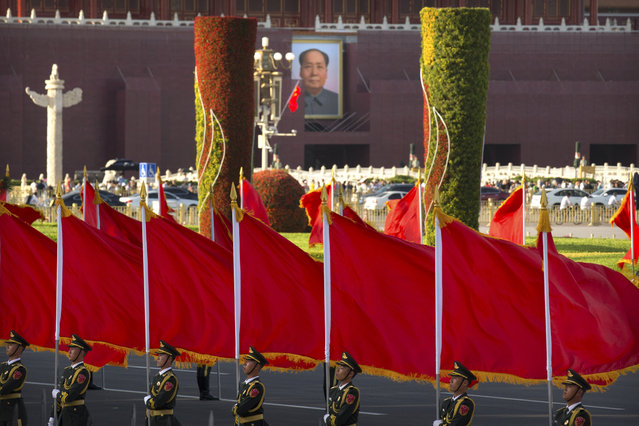 Members of a Chinese honor guard stand in formation near the large portrait of former Chinese leader Mao Zedong on Tiananmen Gate near Tiananmen Square before a welcome ceremony for Niger's President Mahamadou Issoufou at the Great Hall of the People in Beijing, Tuesday, May 28, 2019. (Photo by Mark Schiefelbein/AP Photo) 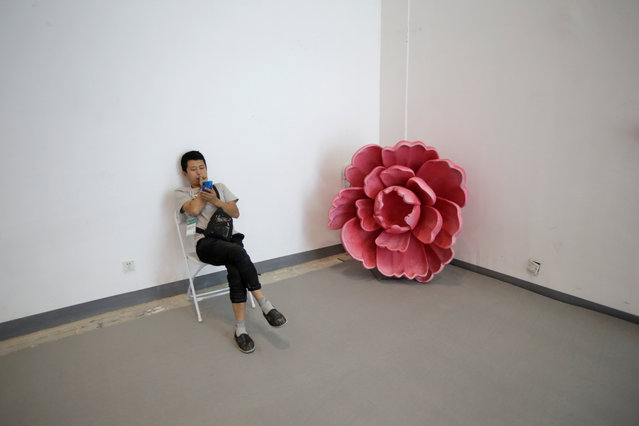 A man rests next to a decoration at China International Fair for Trade in Services in Beijing, China, May 28, 2019. (Photo by Jason Lee/Reuters) 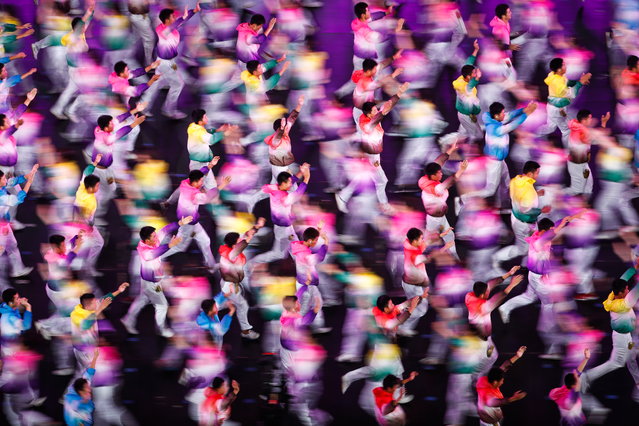 Performers in action during the Asian Culture Carnival at the National Stadium (The Bird's Nest) in Beijing, China, 15 May 2019. Around 8,000 performers from different countries including China, South Korea, and Japan took part in the Asian Culture Carnival. The Carnival is the part of The Conference on Dialogue of Asian Civilizations event which China hosts from 15 May. (Photo by Roman Pilipey/EPA/EFE) 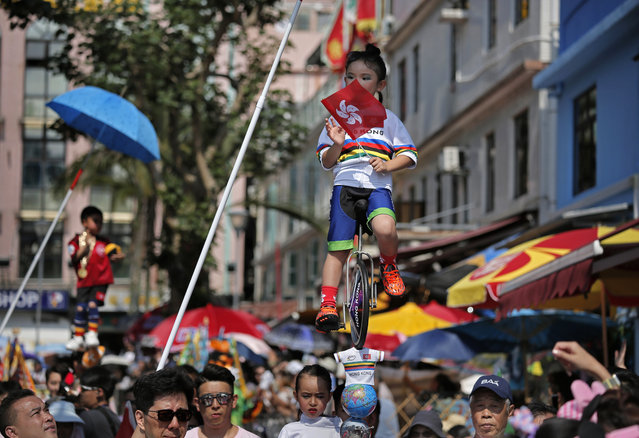 In this Sunday, May 12, 2019, file photo, a child dressed in a traditional Chinese costume floats in the air, supported by a rig of hidden metal rods, during a parade on the outlying Cheung Chau island in Hong Kong to celebrate the Bun Festival. Thousands of local residents and tourists flocked to an outlying island in Hong Kong to celebrate a local bun festival on Sunday. The festival features a parade with children dressed as deities floated on poles. (Photo by Vincent Yu/AP Photo/File) 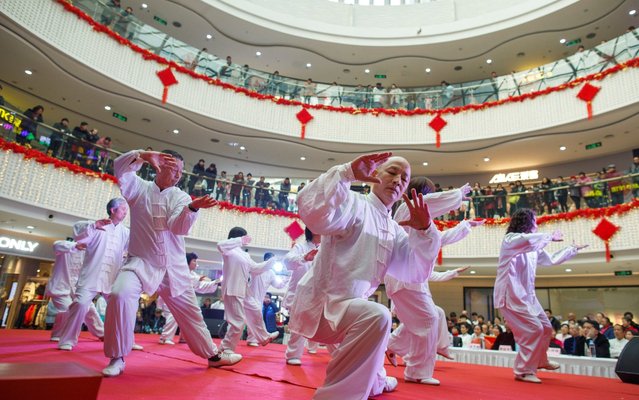 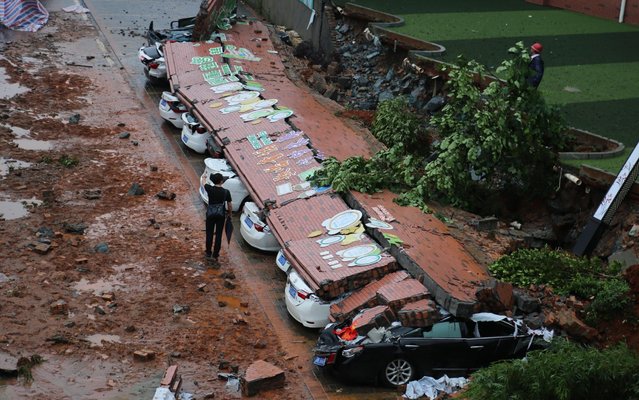 Eleven cars are buried by a fallen wall after a heavy rain at Yichun Huanggang experimental school on May 19, 2019 in Yichun, Jiangxi Province of China. Heavy rain hit Yichun on Sunday. (Photo by Zou Haibin/VCG via Getty Images) 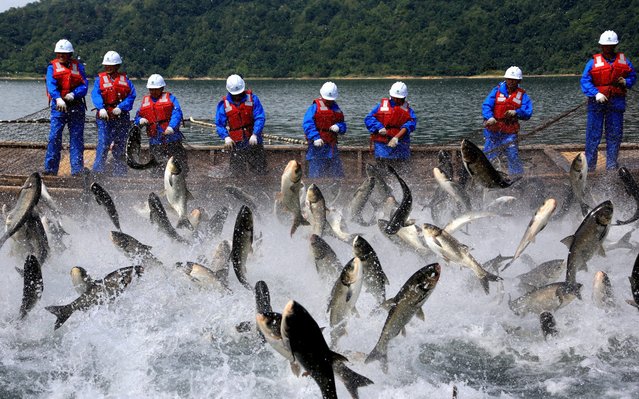 Fishing team members pull a fishing net with its catch at Huangshan Taiping Lake on May 21, 2019 in Huangshan, Anhui Province of China. (Photo by Pan Cheng/VCG via Getty Images) 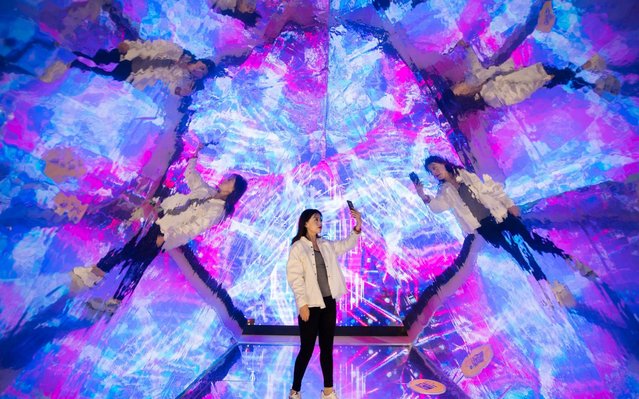 A visitor takes selfies in the “Kaleidoscope” installation at an experience centre on May 27, 2019 in Hohhot, Inner Mongolia Autonomous Region of China. (Photo by Ding Genhou/VCG via Getty Images) 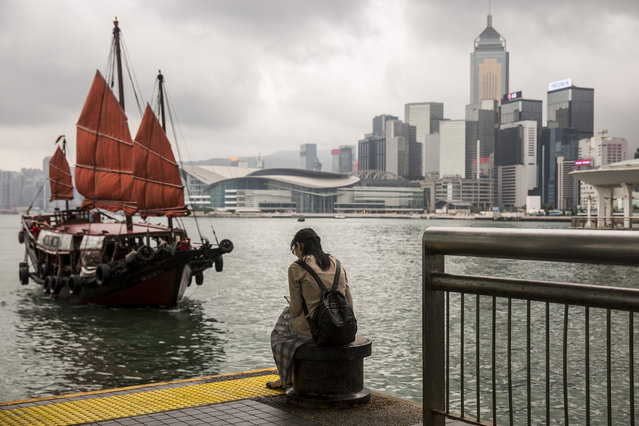