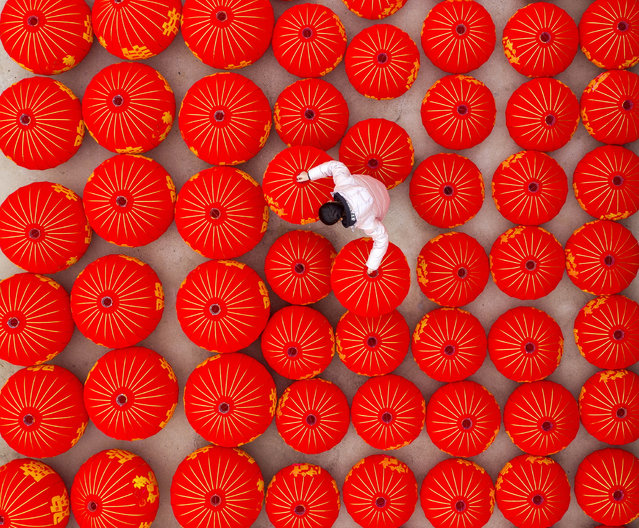 A worker at a factory making red lanterns in Sihong County, Jiangsu Province, China on December 23, 2019. (Photo by Costfoto/Barcroft Media) 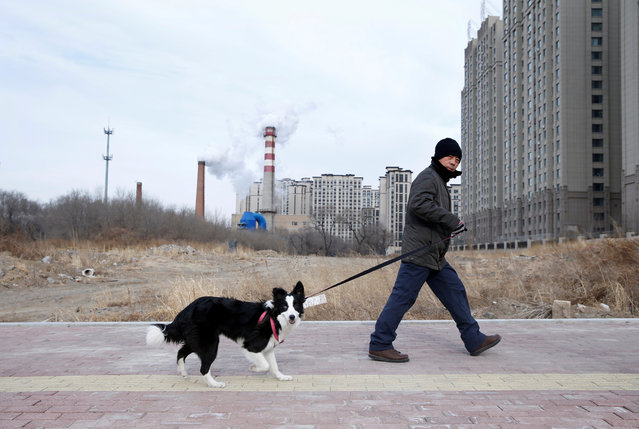 A resident and his dog walk past a coal-fired heating station next to new apartment blocks in Harbin, Heilongjiang province, China on November 26, 2019. (Photo by Jason Lee/Reuters) 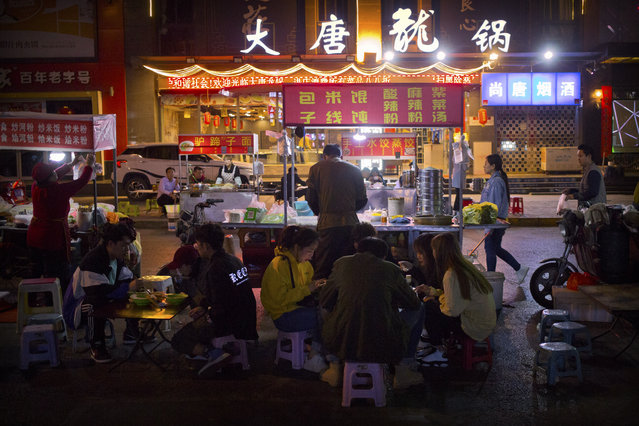 In this March 27, 2019, photo, people eat at an outdoor night market in Xi'an, northwestern China's Shaanxi Province, similar to one at which Yin Hao, who also goes by Yin Qiang, was injured during a fight that led to his initial prescription for Tylox. Officially, pain pill abuse is an American problem, not a Chinese one. But people in China have fallen into opioid abuse the same way many Americans did, through a doctor's prescription. And despite China's strict regulations, online trafficking networks, which facilitated the spread of opioids in the U.S., also exist in China. (Photo by Mark Schiefelbein/AP Photo) 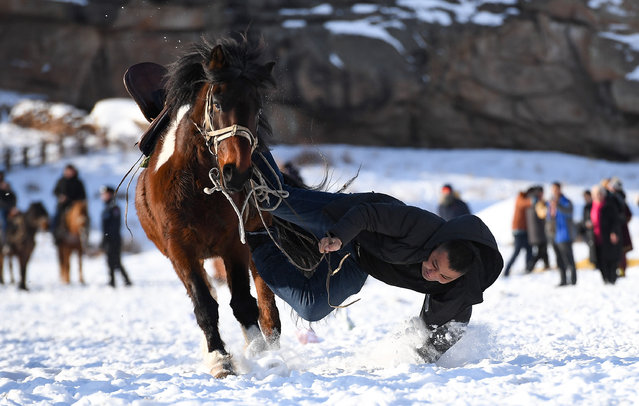 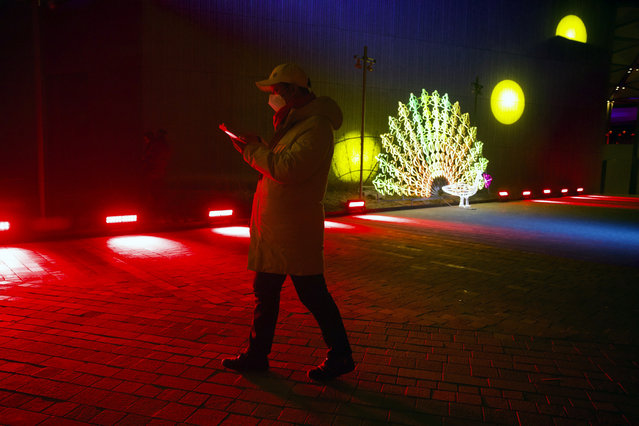 A man walks near a light sculpture before a New Year's Eve countdown event at the 2022 Beijing Winter Olympic headquarters in Bejiing, Tuesday, December 31, 2019. Revelers around the globe are bidding farewell to a decade that will be remembered for the rise of social media, the Arab Spring, the #MeToo movement and, of course, President Donald Trump. (Photo by Ng Han Guan/AP Photo) 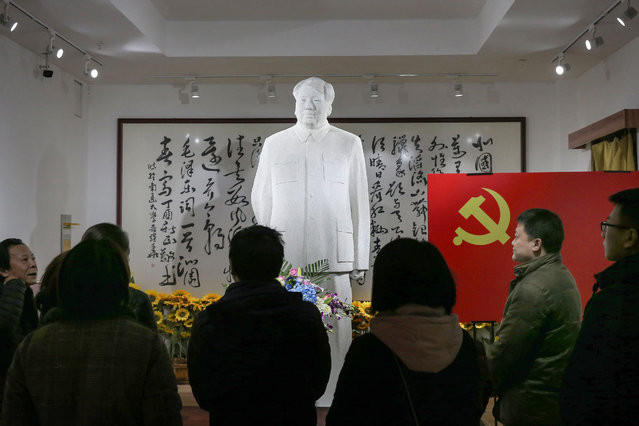 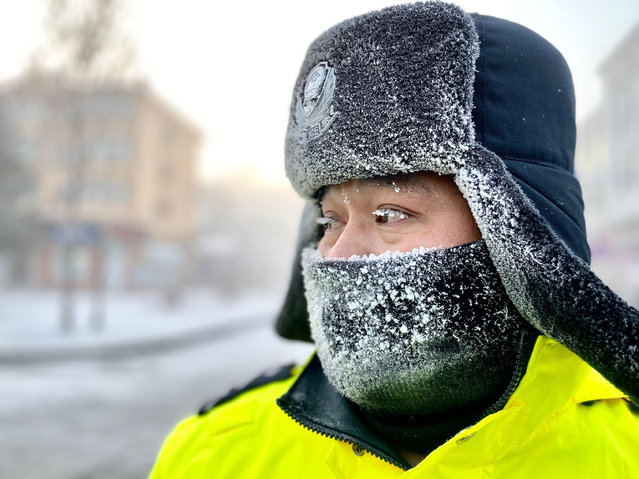 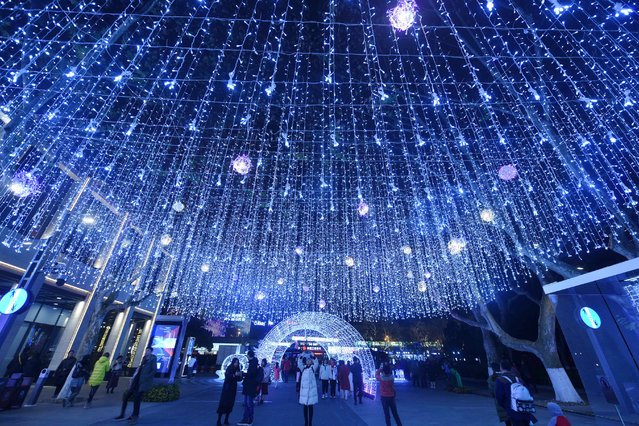 A light installation to welcome in the new year in Hangzhou City, China on December 30, 2019. (Photo by Costfoto/Barcroft Media) 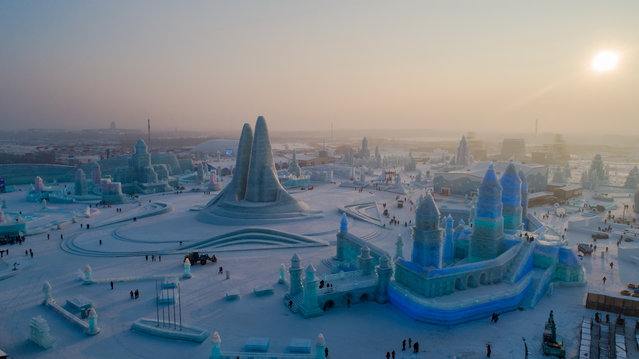 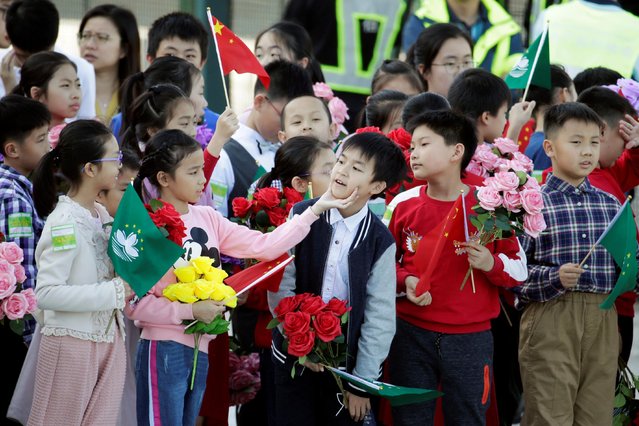 Children holding Chinese and Macau flags get ready before Chinese President Xi Jinping's arrival at Macau International Airport in Macau, China December 18, 2019, ahead of the 20th anniversary of the former Portuguese colony's return to China. (Photo by Jason Lee/Reuters) 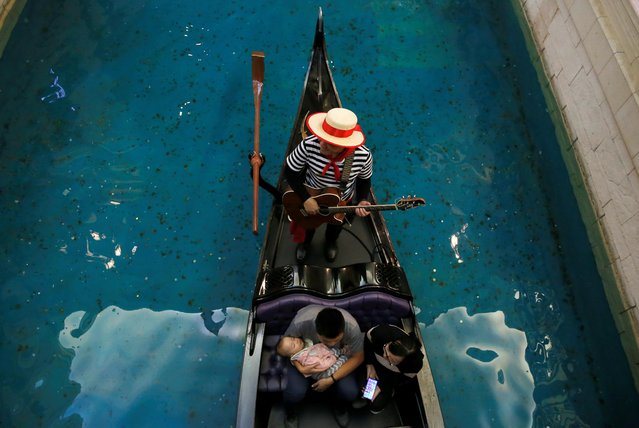 A boy sleeps as the family take a gondola ride inside the shopping mall of the Venetian Macao hotel and casino in Macau, China December 19, 2019, on the eve of the 20th anniversary of the former Portuguese colony's return to China. (Photo by Jason Lee/Reuters) 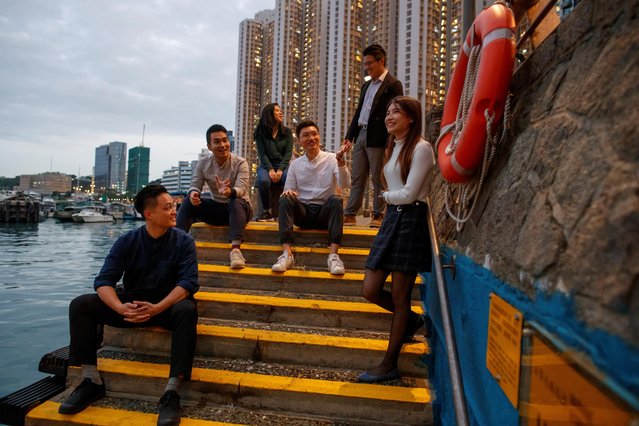 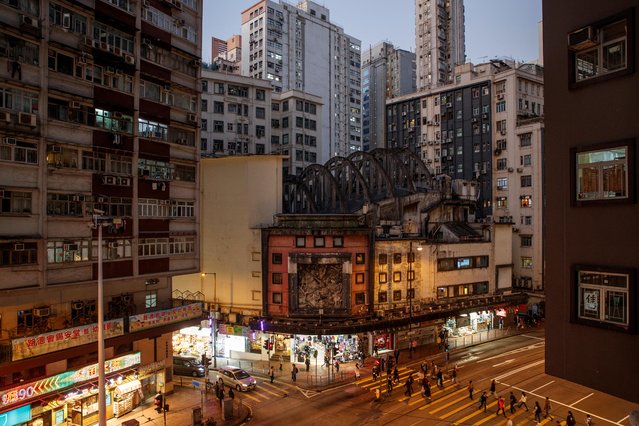 People cross the road outside the State Theatre Building that is slated for demolition in the North Point neighbourhood in Hong Kong, China, December 11, 2019. (Photo by Thomas Peter/Reuters) 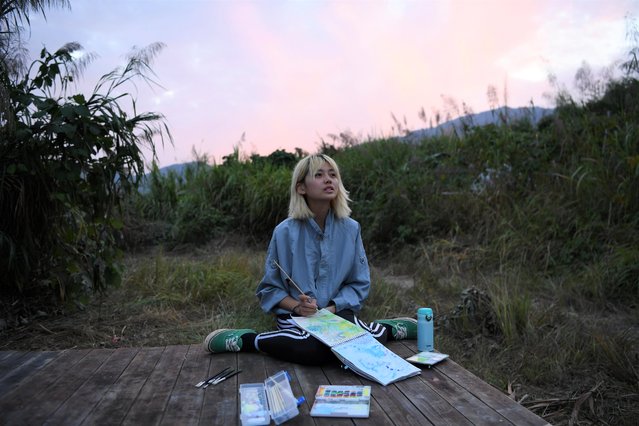 Chen Yan looks up as she paints on a hill during sunset at AnotherCommunity in Guanzhong village, Fuzhou, Fujian province, China on November 3, 2019. The small community preaches sustainable living and mindful consumption. China's teeming megacities have drawn hundreds of millions of people from rural villages and small towns in search of jobs and wealth, but people like Chen are part of an emerging trend in the opposite direction. (Photo by Tingshu Wang/Reuters) 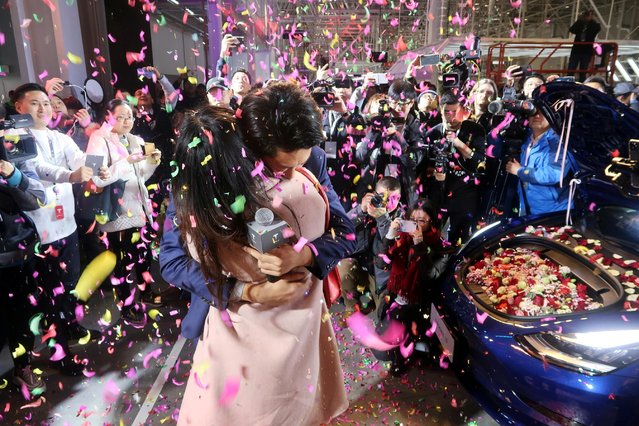 A Tesla employee proposes to his girlfriend with a China-made Tesla Model 3 vehicle filled with flowers at a delivery ceremony in the Shanghai Gigafactory of the U.S. electric car maker in Shanghai, China on December 30, 2019. (Photo by Yilei Sun/Reuters) 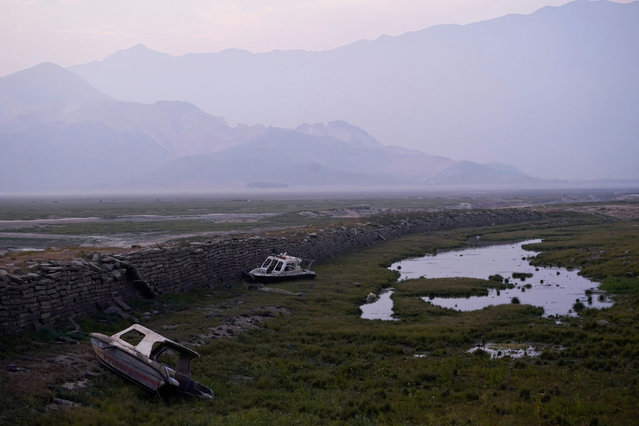 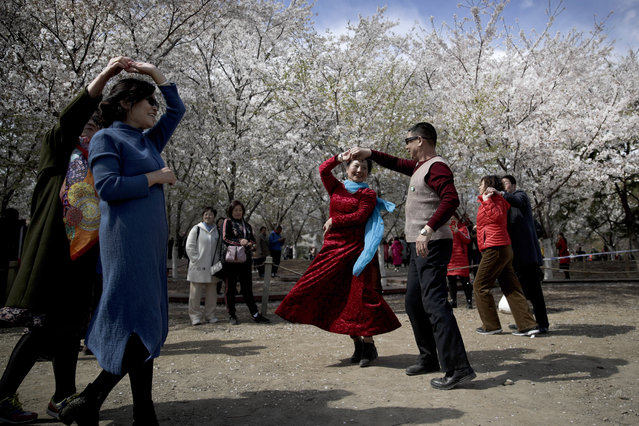 In this March 30, 2019, file photo Chinese people enjoy a social dance near cherry blossoms at the Yuyuantan Park during a spring festival in Beijing. (Photo by Andy Wong/AP Photo/File) 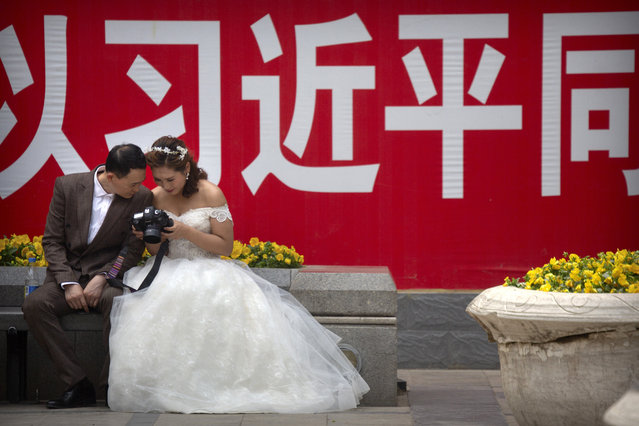 In this May 19, 2018, file photo a couple in wedding dress look at photos on the back of a camera near a propaganda slogan with the name of Chinese President Xi Jinping in Beijing. Chinese leaders have long been sensitive about their communist country’s international image. Now, they are battling back, investing in diplomacy and a courtship of hearts and minds, just as the United States digs in on the Trump administration’s “America First” mindset. (Photo by Mark Schiefelbein/AP Photo/File) 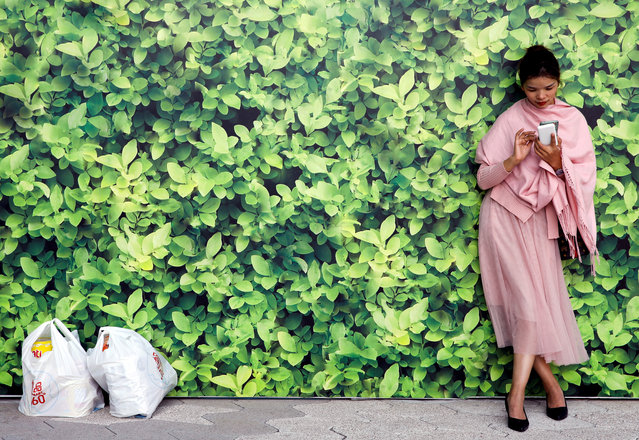 A woman uses her mobile at Tsim Sha Tsui waterfront in Hong Kong, China on December 27, 2019. (Photo by Navesh Chitrakar/Reuters) 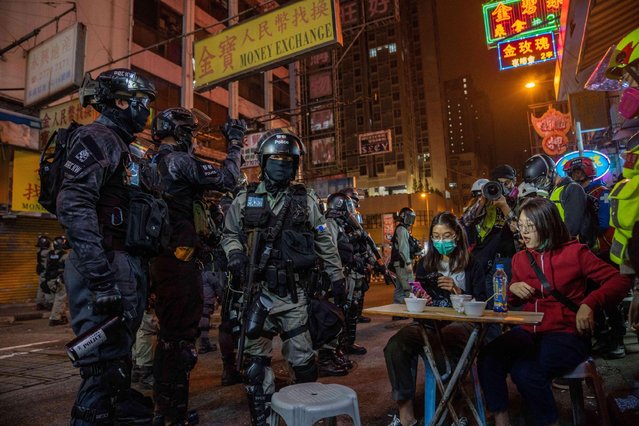 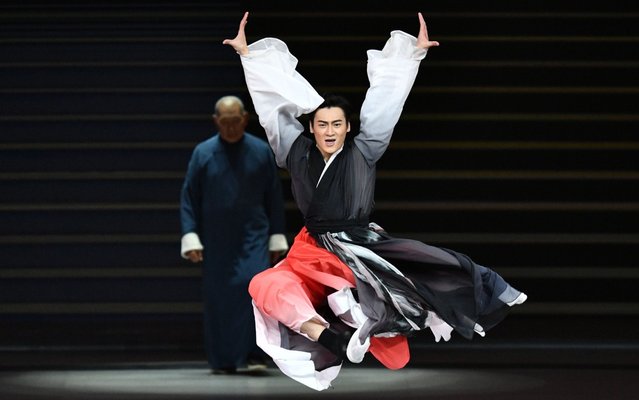 Performers take part in the “Passion of Macao, Heart of China” variety show in Macau on December 19, 2019, ahead of the 20th anniversary of the handover from Portugal to China. (Photo by Anthony Wallace/AFP Photo) 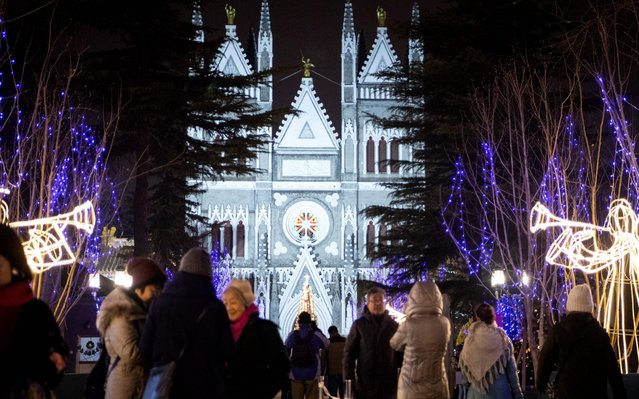 The Xishiku Cathedral is decorated with lights for a Christmas eve mass in Beijing on December 24, 2019. (Photo by Noel Celis/AFP Photo) 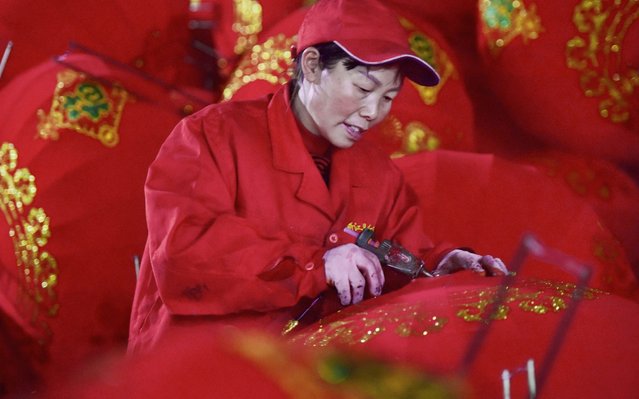