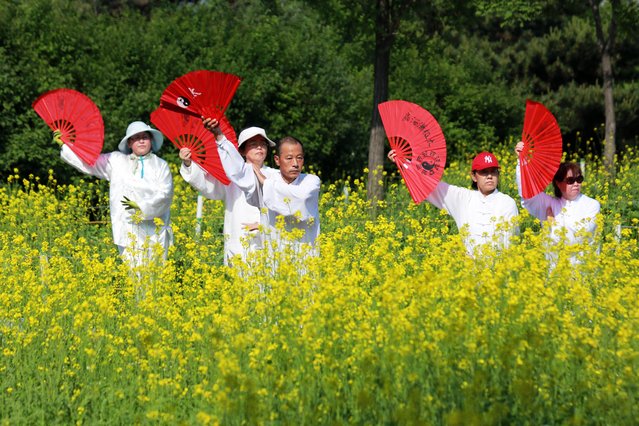 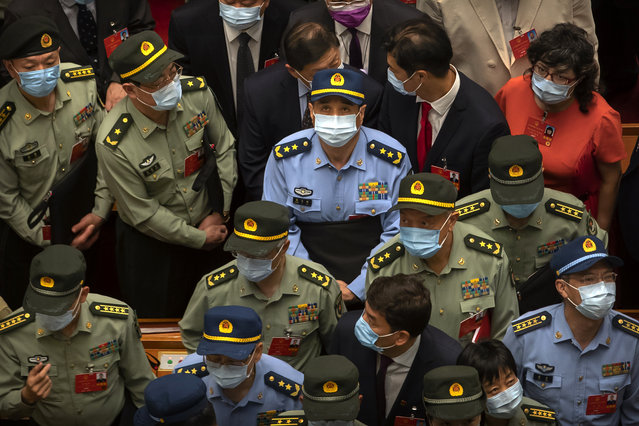 Military delegates wait to leave after the closing session of China's National People's Congress (NPC) at the Great Hall of the People in Beijing, Thursday, May 28, 2020. China's ceremonial legislature has endorsed a national security law for Hong Kong that has strained relations with the United States and Britain. (Photo by Mark Schiefelbein/AP Photo) 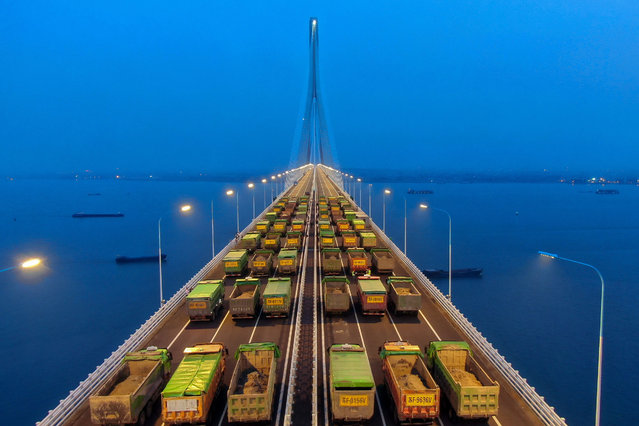 This aerial photo taken on May 27, 2020 shows trucks driving on the Hutong Yangtze River Bridge during a load test in Nantong, in China's eastern Jiangsu province. (Photo by AFP Photo/China Stringer Network) 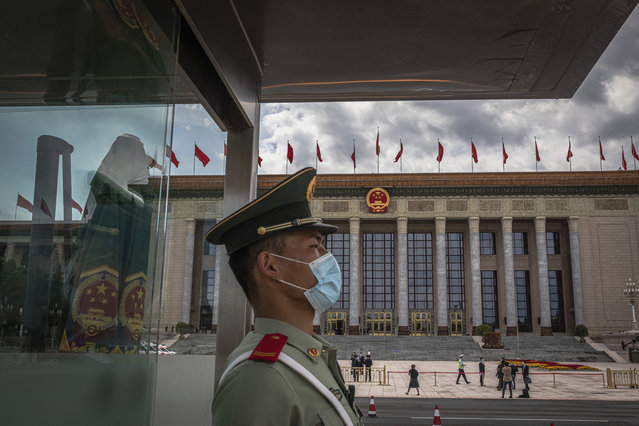 A Chinese People's Liberation Army (PLA) soldier wearing a protective face mask stands guard in front of the Great Hall of the People before the second plenary session of China's National People's Congress (NPC), in Beijing, Monday, May 25, 2020. (Photo by Roman Pilipey/Pool Photo via AP Photo) 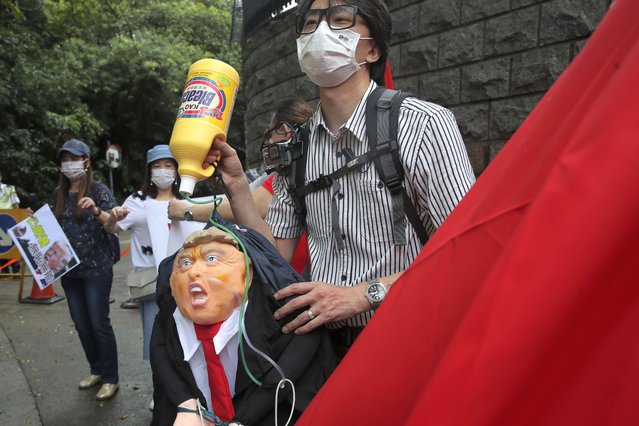 Pro-China supporters hold the effigy of U.S. President Donald Trump outside the U.S. Consulate during a protest, in Hong Kong, Saturday, May 30, 2020. President Donald Trump has announced a series of measures aimed at China as a rift between the two countries grows. He said Friday that he would withdraw funding from the World Health Organization, end Hong Kong's special trade status and suspend visas of Chinese graduate students suspected of conducting research on behalf of their government. (Photo by Kin Cheung/AP Photo) 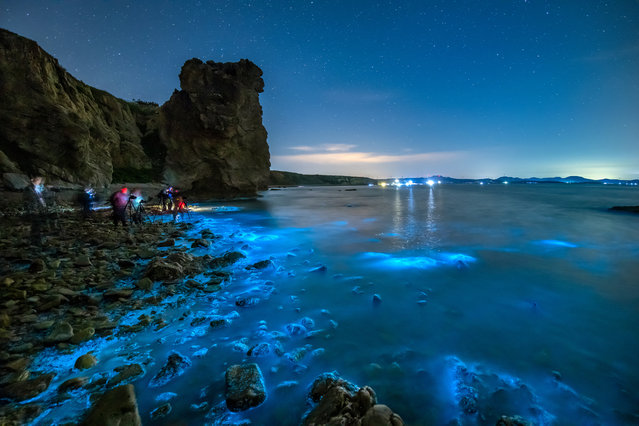 Visitors take photos of the fluorescent sea in the waters of Paishi Village, Dalian City, Liaoning Province, China, May 24, 2020, from the night of May 24 to the early morning of May 25, 2020. The fluorescent sea in dalian is caused by noctilucent algae in the sea water. (Photo by Costfoto/Barcroft Media via Getty Images) 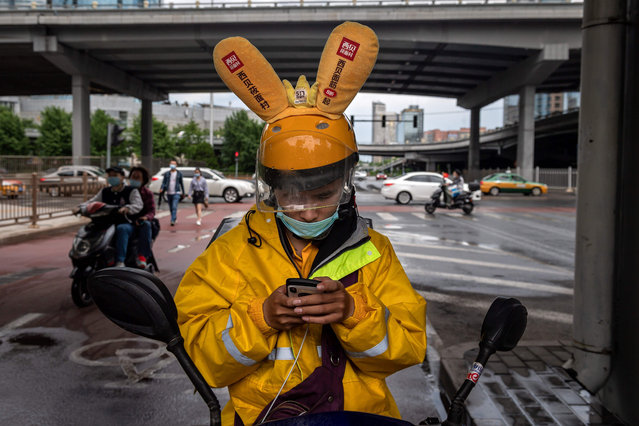 A delivery man looks at a map on his smartphone along a street in Beijing on May 25, 2020. (Photo by Nicolas Asfouri/AFP Photo) 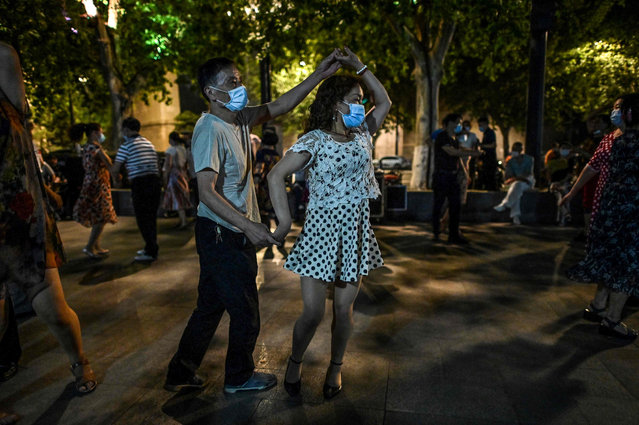 People wearing facemasks dance in a park next to Yangtze River in Wuhan, China's central Hubei province on May 27, 2020. China's foreign minister on May 24 said the country was “open” to international cooperation to identify the source of the disease, but any investigation must be led by the World Health Organization and “free of political interference”. (Photo by Hector Retamal/AFP Photo) 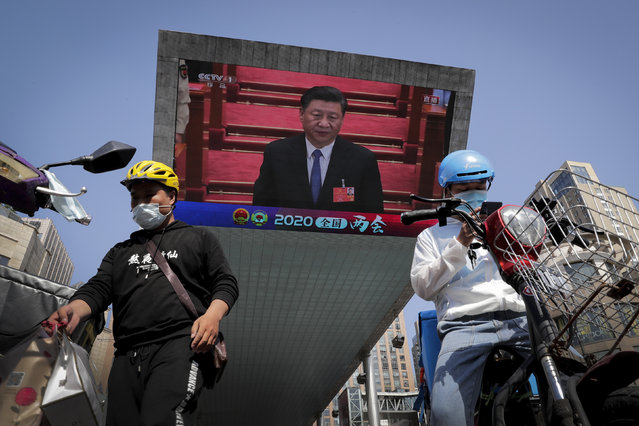 Food delivery workers wearing face masks to protect against the spread of the new coronavirus prepare to delivery foods near a TV screen showing Chinese President Xi Jinping attending the closing ceremony of the National People's Congress in a news report, in Beijing, China, Thursday, May 28, 2020. China's ceremonial legislature on Thursday endorsed a national security law for Hong Kong that has strained relations with the United States and Britain. (Photo by Andy Wong/AP Photo) 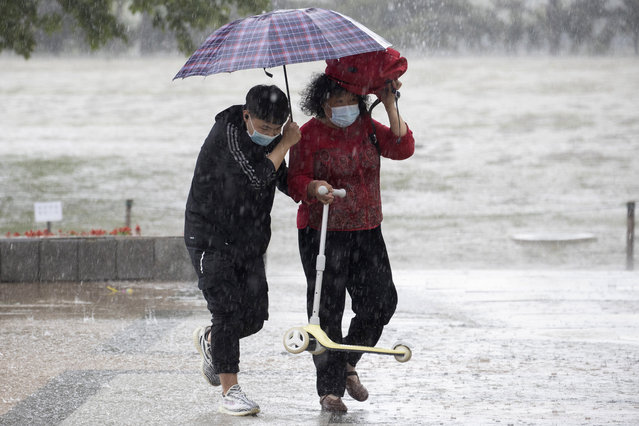 Visitors wearing masks to curb the spread of the coronavirus takes shelter from a sudden rainstorm at a park in Beijing on Saturday, May 23, 2020. New coronavirus cases dropped to zero in China for the first time Saturday but overwhelmed hospitals across Latin America – both in countries lax about lockdowns and those lauded for firm, early confinement. (Photo by Ng Han Guan/AP Photo) 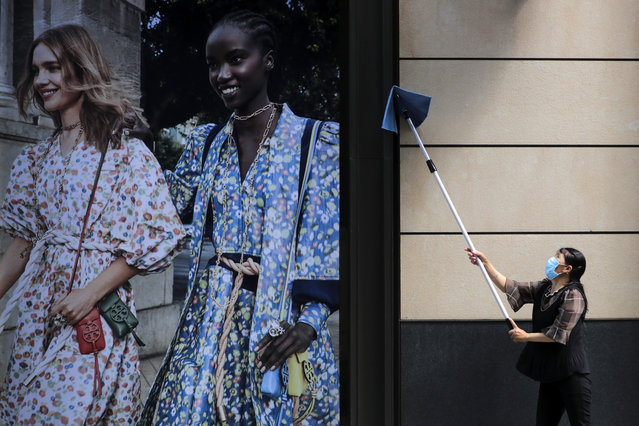 A worker wearing a protective face mask to help curb the spread of the new coronavirus wipes window panels of a fashion clothing store in Beijing, Thursday, May 28, 2020. The legislature on Thursday approved a government budget that will increase spending to generate jobs in an effort to reverse an economic slump after Chinese industries were shut down to fight the coronavirus pandemic. (Photo by Andy Wong/AP Photo) 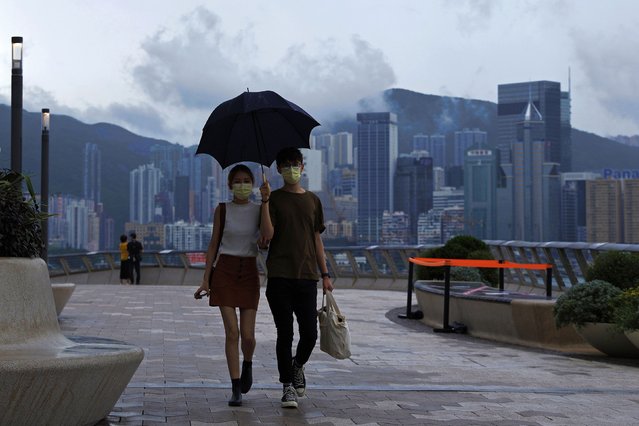 A couple walk along the waterfront of the Victoria Harbor of Hong Kong Tuesday, May 26, 2020. Hong Kong has been living on borrowed time ever since the British made it a colony nearly 180 years ago, and all the more so after Beijing took control in 1997, granting it autonomous status. A national security law approved by China's legislature Thursday is a reminder that the city's special status is in the hands of Communist Party leaders who have spent decades building their own trade and financial centers to take Hong Kong's place. (Photo by Kin Cheung/AP Photo) 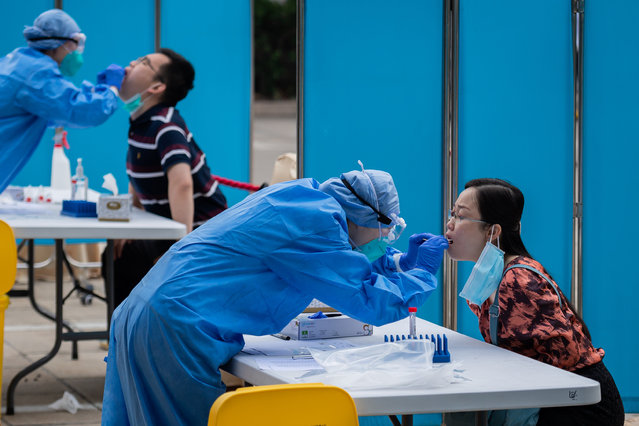 Medical workers wearing full protective gear take swab samples from a journalist to test for the COVID-19 coronavirus, nine hours before the closing ceremony of the National People's Congress (NPC) at the Diaoyutai hotel in Beijing on May 28, 2020. All journalists accredited to cover the National People's Congress events have to pass the COVID-19 test. (Photo by Nicolas Asfouri/AFP Photo) 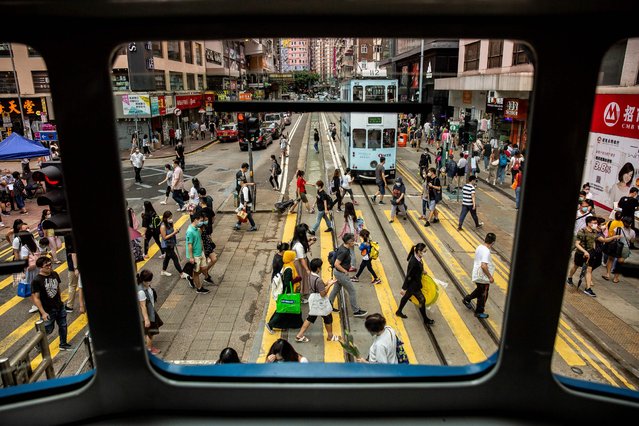 People crossing a road are seen through the window of a tram in Hong Kong on May 23, 2020. A proposal to enact new Hong Kong security legislation was submitted to China's rubber-stamp in Beijing on May 22, state media said, a move expected to fan fresh protests in the semi-autonomous financial hub. (Photo by Isaac Lawrence/AFP Photo) 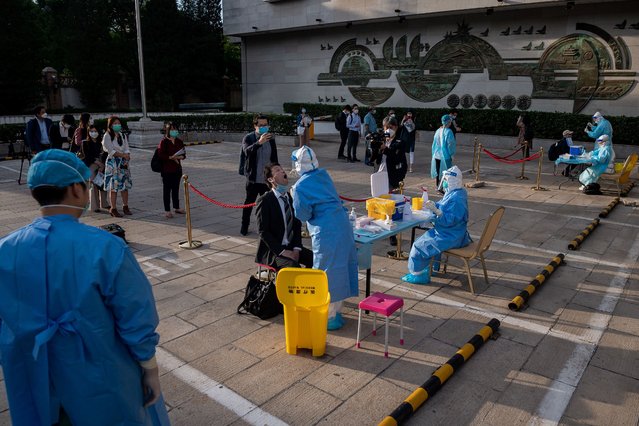 Medical workers wearing full protective gear prepare to take swab samples from journalists to test for the COVID-19 coronavirus, nine hours before the press conference of China's Foreign Minister Wang Yi during the National People's Congress (NPC) in Beijing on May 24, 2020. All journalists accredited to cover the CPPCC and National People's Congress events have to pass the COVID-19 test. (Photo by Nicolas Asfouri/AFP Photo) 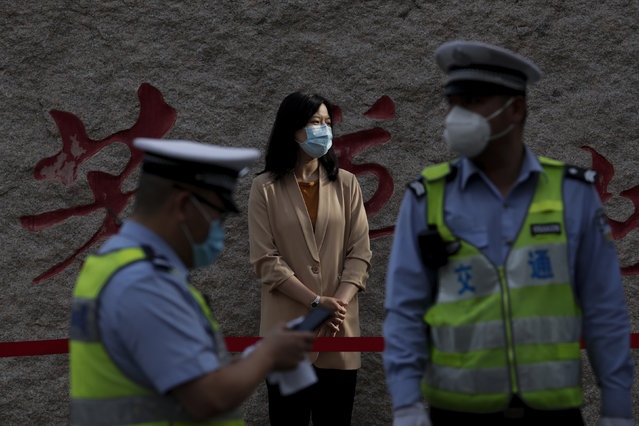 A teacher wearing a protective face mask to help curb the spread of the new coronavirus waits for arrival of the students outside a primary school in Beijing, Monday, June 1, 2020. With declining virus case numbers, students have gradually returning to their classes in the capital city. (Photo by Andy Wong/AP Photo) 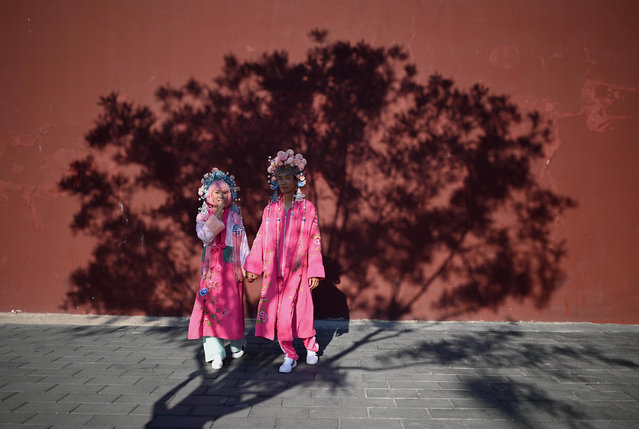 A couple wearing costumes poses for a photographer underneath the shade of a tree in Beijing on May 26, 2020. (Photo by Noel Celis/AFP Photo) 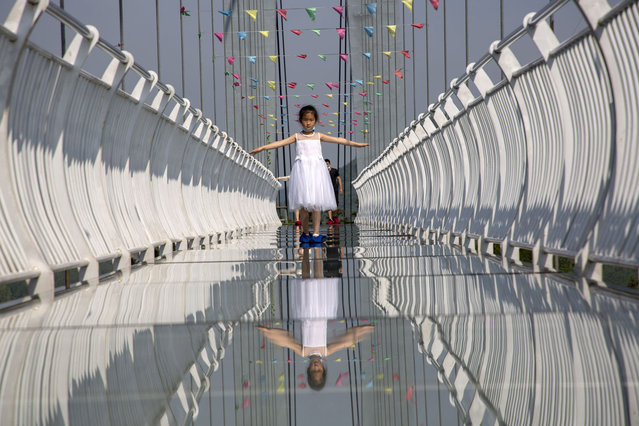 A child stands on a glass-bottomed skywalk on May 21, 2020 in Xiangyang, Hubei Province of China. (Photo by VCG/VCG via Getty Images) 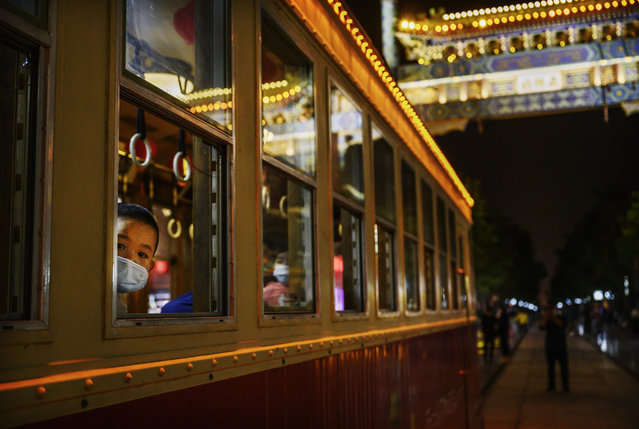 A Chinese boy wears a protective mask as he rides in a streetcar in a tourist and commercial area on May 16, 2020 in Beijing, China. After decades of growth, officials recently said Chinas economy had shrunk in the latest quarter due to the impact of the coronavirus epidemic. The slump in the worlds second largest economy is regarded as a sign of difficult times ahead for the global economy. While industrial sectors in China are showing signs of reviving production, a majority of private companies are operating at only 50% capacity, according to analysts. With the pandemic hitting hard across the world, officially the number of coronavirus cases in China is dwindling, ever since the government imposed sweeping measures to keep the disease from spreading. Officials believe the worst appears to be over in China, though there are concerns of another wave of infections as the government attempts to reboot the worlds second largest economy. Since January, China has recorded more than 81,000 cases of COVID-19 and over 4000 deaths, mostly in and around the city of Wuhan, in central Hubei province, where the outbreak first started. (Photo by Kevin Frayer/Getty Images) 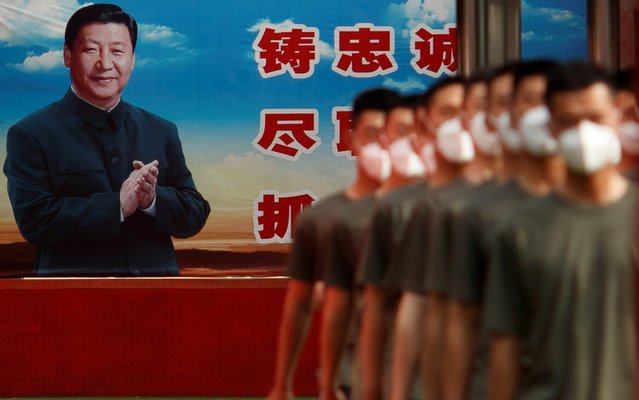 Paramilitary Police officers march in formation near a poster of Chinese President Xi Jinping at the gate to the Forbidden City on the opening day of the National People's Congress (NPC) following the outbreak of the coronavirus disease (COVID-19), in Beijing, China on May 22, 2020. (Photo by Thomas Peter/Reuters) 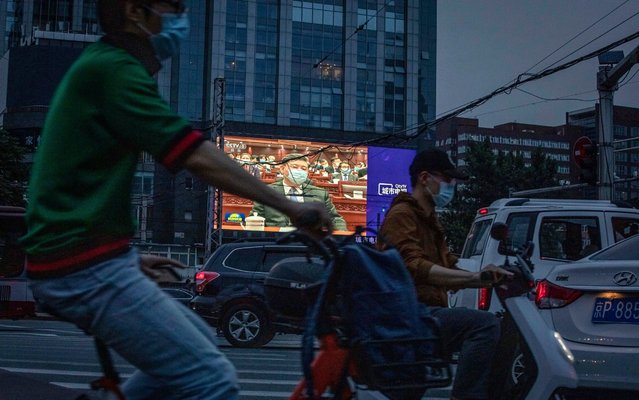