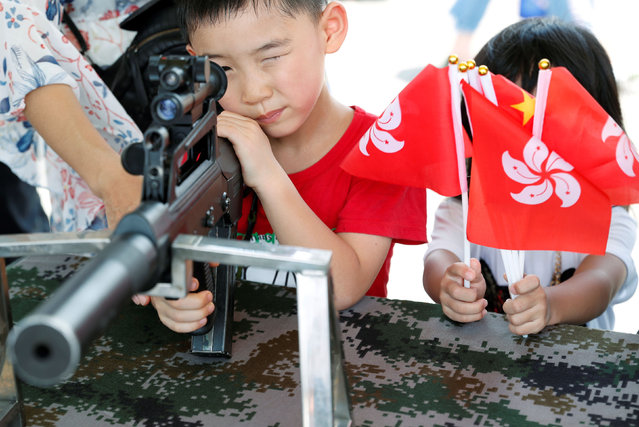 A child plays with a gun during an open day of Stonecutters Island naval base, in Hong Kong, China, June 30, 2019. (Photo by Tyrone Siu/Reuters) 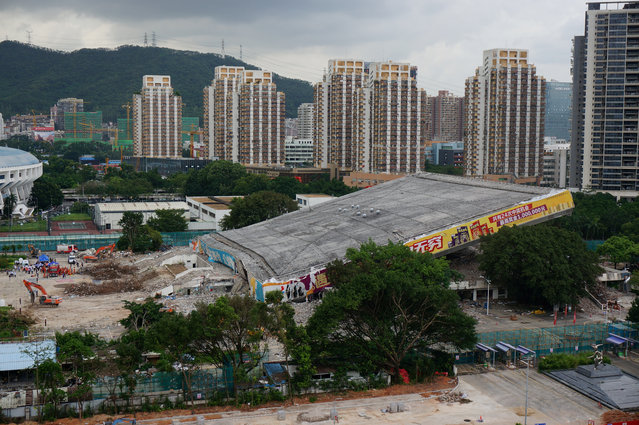 Rescue workers and excavators are seen next to a collapsed sports stadium in Shenzhen, Guangdong province, China July 8, 2019. (Photo by Reuters/China Stringer Network) 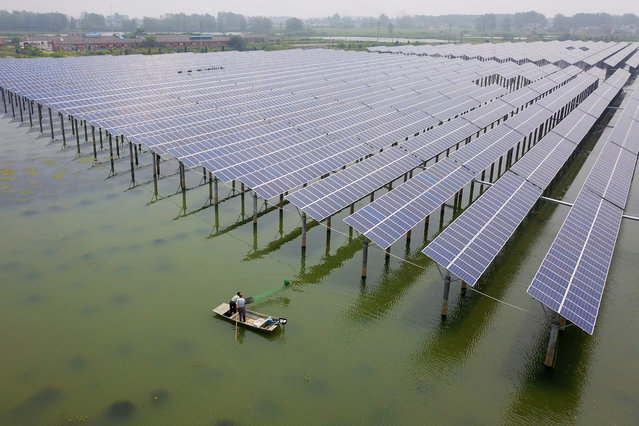 Aerial view of fishermen catching crayfish next to photovoltaic solar pannels at a fishery-solar hybrid photovoltaic power station on June 24, 2019 in Yangzhou, Jiangsu Province of China. China's electricity consumption, a key barometer of economic activity, rose 2.3 percent year-on-year to 566.5 billion kilowatt hours in May, according to the National Energy Administration. (Photo by Meng Delong/VCG via Getty Images) 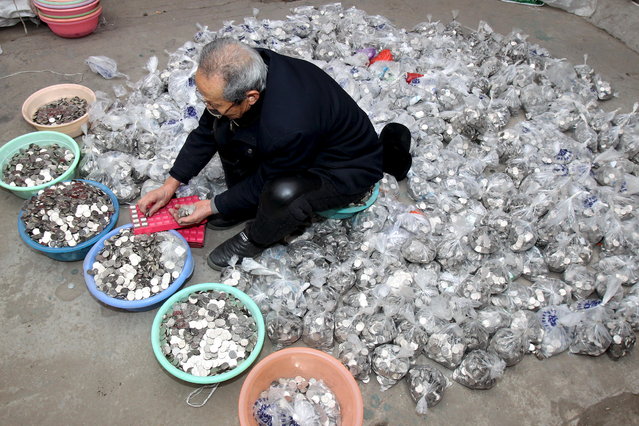 A man counts coins collected from coin-operated laundry machines, at a warehouse in Zhengzhou, Henan province, China, January 11, 2016. A man running a coin-operated laundromat service had failed to exchange 300,000 yuan ($45,609) worth of coins into banknotes to pay his employees 3 months worth of salaries, according to local media. Local banks said they are unable to process the exchange in a go, the reports added. (Photo by Reuters/China Stringer Network) 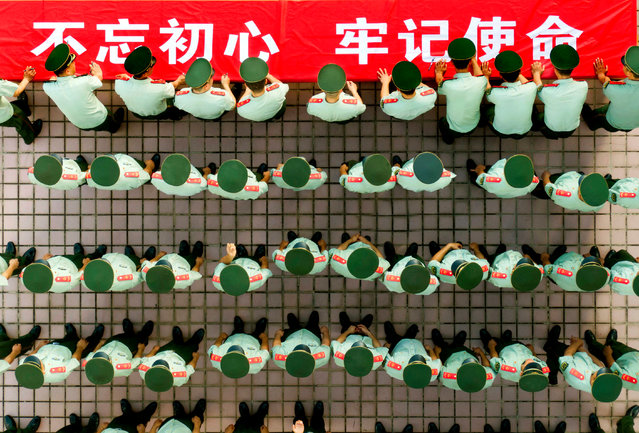 Members of the local paramilitary force sign their names on a banner marking the 98th anniversary of the Communist party in Shenzhen, China on June 30, 2019. (Photo by Feature China/Barcroft Media) 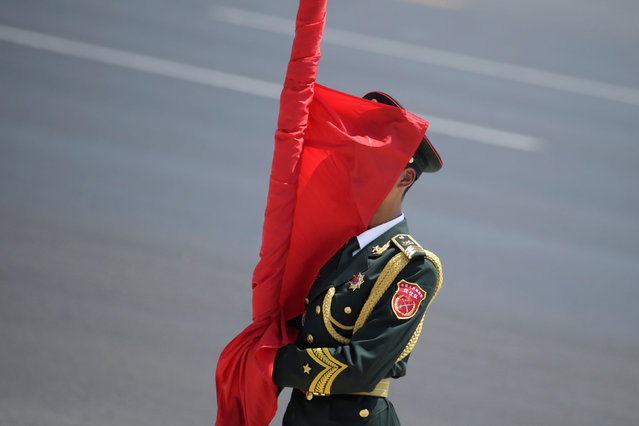 A member of the Chinese honour guard attends a welcome ceremony for Bangladeshi Prime Minister Sheikh Hasina outside the Great Hall of the People in Beijing, China, July 4, 2019. (Photo by Jason Lee/Reuters) 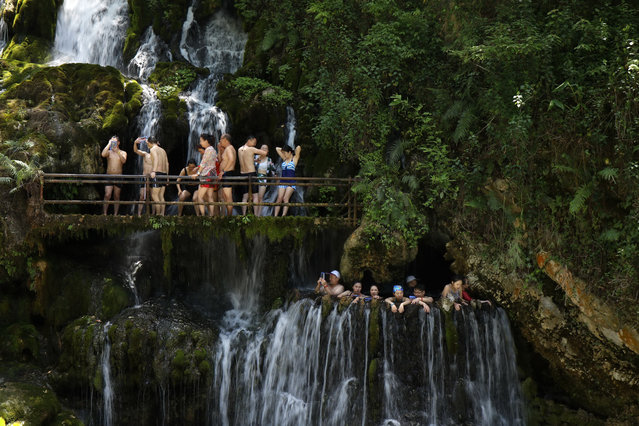 Tourists soak in the water at the ‘world’s largest’ hot spring waterfall deep in the mountains of south-west China’s Sichuan province, Xichang, China on June 21, 2019. (Photo by Costfoto/Barcroft Media) 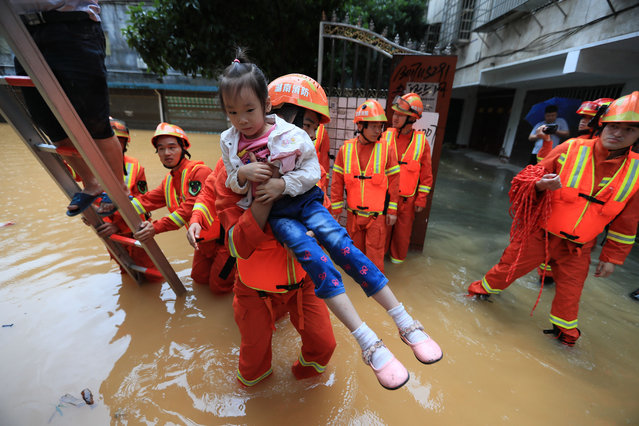 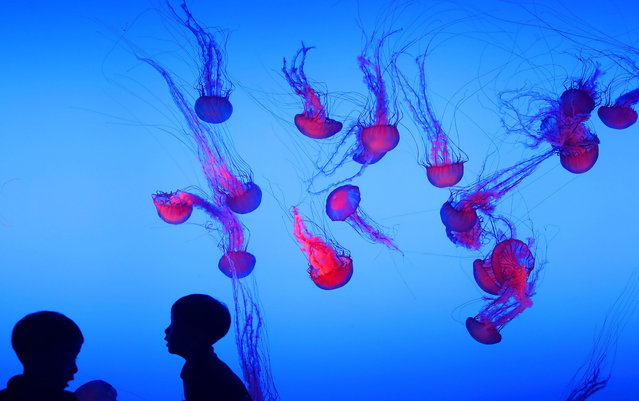 Kids watch jellyfish at the jellyfish aquarium of Nanjing Underwater World on July 3, 2019 in Nanjing, Jiangsu Province of China. The aquarium in Nanjing has 11 kinds of jellyfish from all over the world. (Photo by Yang Bo/China News Service/VCG via Getty Images) 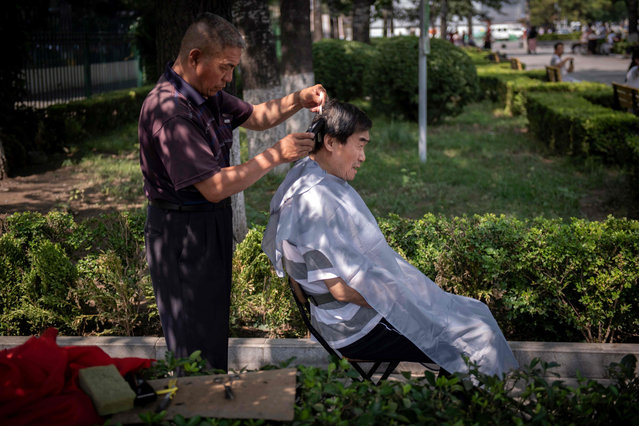 A man gets his hair cut on a street in Beijing on July 8, 2019. (Photo by Nicolas Asfouri/AFP Photo) 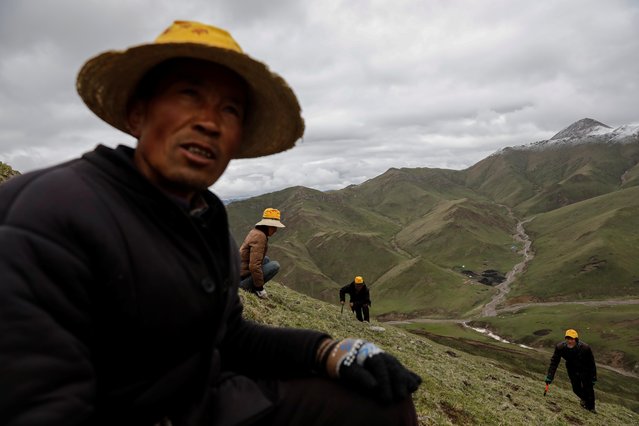 Cordyceps picker Xing Hairen, 51, looks on as others scan the ground to find Ophiocordyceps sinensis, a fungus believed to possess aphrodisiac and medicinal powers, on a mountain in the Amne Machin range in China's western Qinghai province, June 8, 2019. Demand for the highly prized cordyceps has increased sharply in the last decade as an emerging Chinese middle class seeks it to cure everything from kidney disorders to impotence. (Photo by Aly Song/Reuters) 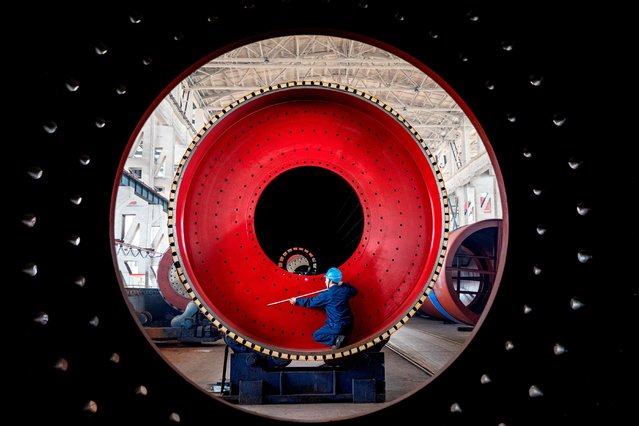 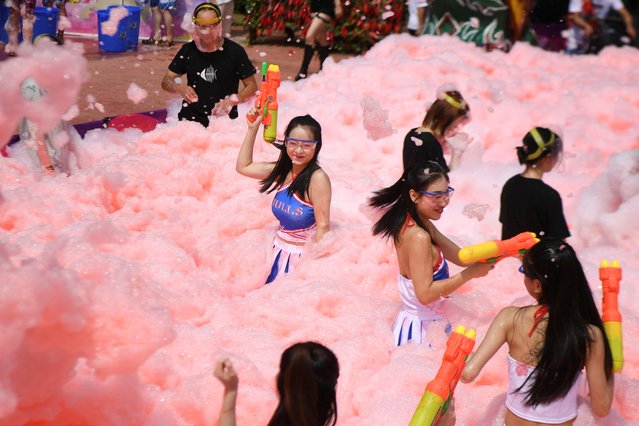 People hold water guns as they play inside a pool filled with foam bubbles mixed with chili liquid during an event on a hot day in Ningxiang, Hunan province, China on July 1, 2019. (Photo by Reuters/China Stringer Network) 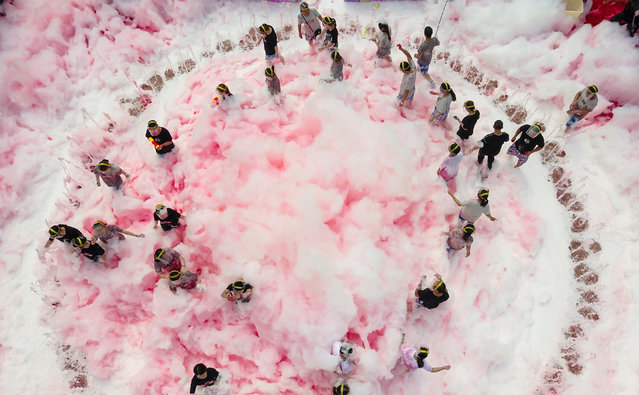 This aerial photo taken on July 2, 2019 shows participants playing in foam mixed with chili pepper water during an event, held to attract tourists to the region which is famous for spicy food, in Ningxiang county in China's central Hunan province. (Photo by AFP Photo/Stringer) 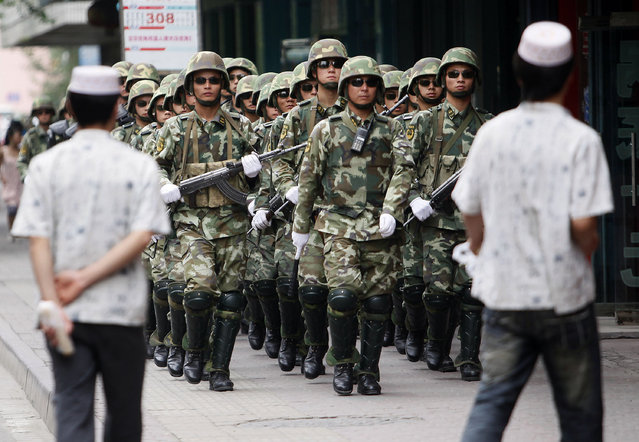 In this Monday, July 13, 2009, file photo, paramilitary police officers patrol in the aftermath of riots as Uighur men walk by in Urumqi, western China's Xinjiang province. Analysts say the Urumqi riots in 2009 set in motion the harsh security measures now in place across Xinjiang, where about 1 million Uighurs, Kazakhs and other Muslims are estimated to be held in heavily-guarded internment camps – also called “re-education” camps – which the Chinese government describes as vocational training centers. (Photo by Eugene Hoshiko/AP Photo/File) 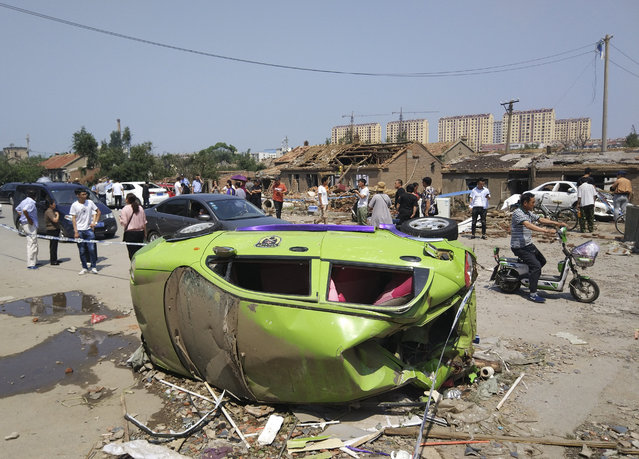 Residents past by an overturned car in the aftermath of a tornado in Kaiyuan in northeastern China's Liaoning province Thursday, July 4, 2019. A tornado blew through the city in northeast China, damaging factories and buildings, killing some people and injuring others, state media reported Thursday (Photo by Chinatopix via AP Photo) 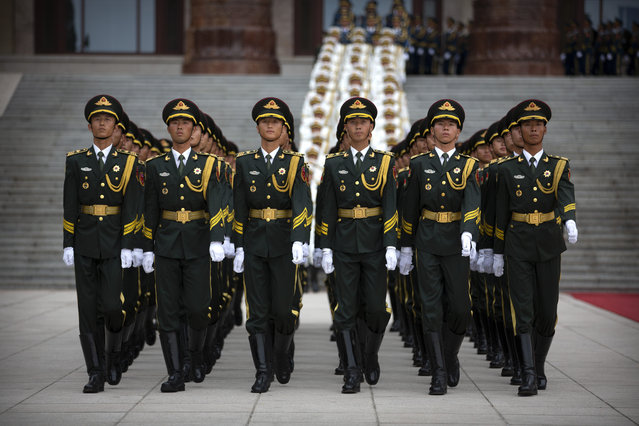 Honor guard members march in formation before a welcome ceremony for Turkish President Recep Tayyip Erdogan at the Great Hall of the People in Beijing, Tuesday, July 2, 2019. (Photo by Mark Schiefelbein/AP Photo) 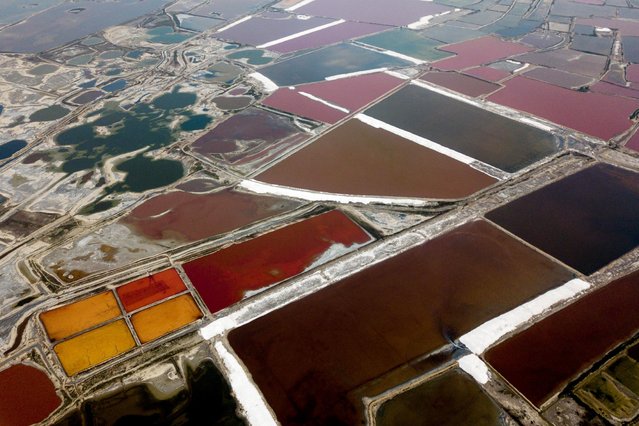 Aerial view of the colorful Salt Lake in hot summer on July 3, 2019 in Yuncheng, Shanxi Province of China. Colors of the Salt Lake change due to recent high temperatures. (Photo by Wei Liang/China News Service/VCG via Getty Images) 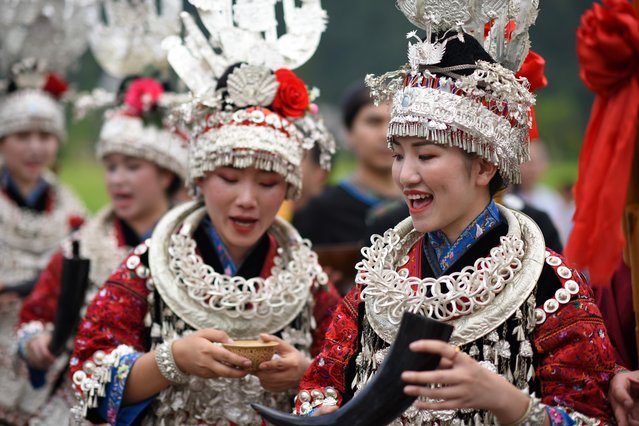 Women of Miao ethnic group are seen during a dragon canoe festival in Shidong Town, in Guizhou, China on June 27, 2019. Local Miao people celebrated the annual festival in the town Thursday. (Photo by Yang Wenbin/The Times) 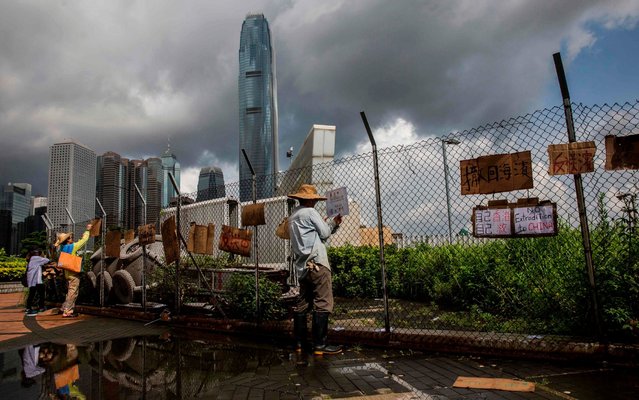 Workers remove signs left by protesters along a Victoria Harbour pier in Hong Kong on June 29, 2019, after China's People's Liberation Army (PLA) were automatically granted control of the pier under a 1994 British and Chinese agreement. (Photo by Isaac Lawrence/AFP Photo) 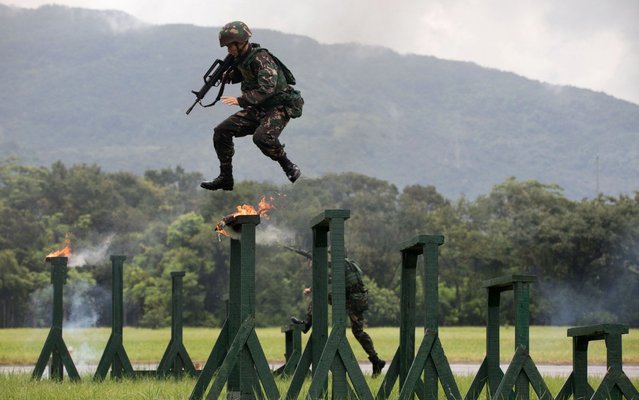 A soldier of the Peoples' Liberation Army (PLA) performs drills during a demonstration at an open day at the Ngong Shuen Chau Barracks in Hong Kong on June 30, 2019, to mark the 22nd anniversary of Hong Kong's handover from Britain to China on July 1. (Photo by Paul Yeung/Bloomberg) 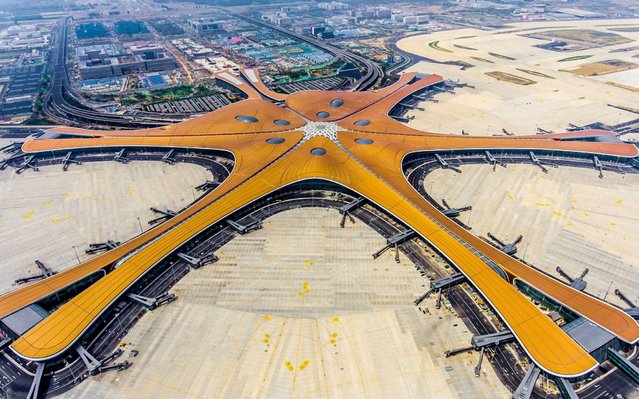 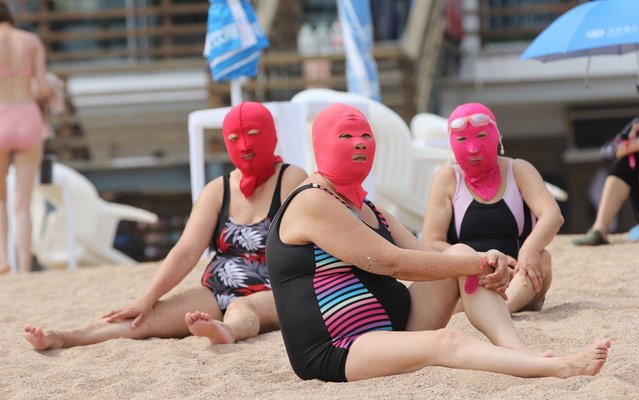 People spend the summer at Qingdao seaside in Shandong, China on July 3, 2019. The maximum temperature of Qingdao beach was 26 degrees Celsius on that day, and all the 9 sea bathing places were open, attracting a large number of visitors to the seaside to enjoy the cool world. (Photo by Huang Jiexian/ZUMA Press) 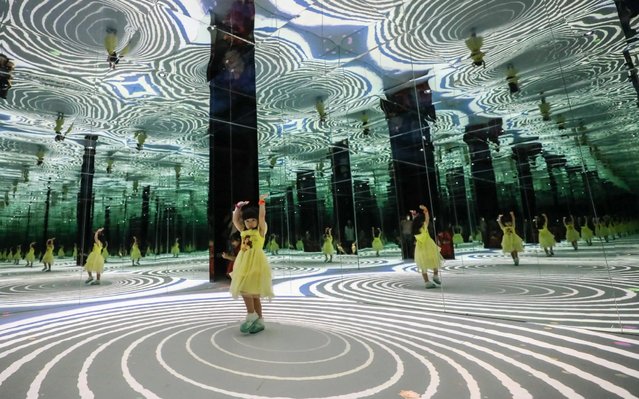