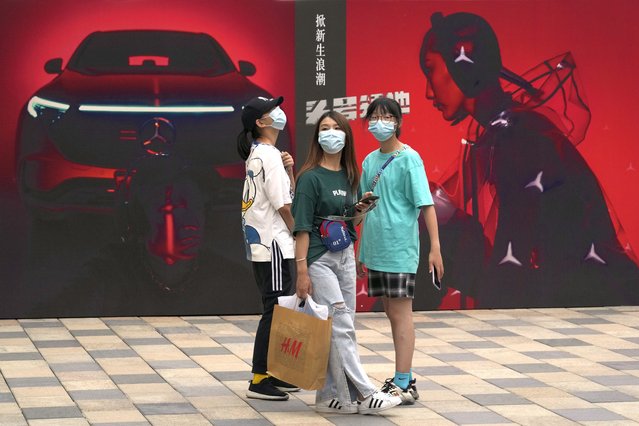 Shoppers past near advertisements for Mercedes Benz at a mall in Beijing on Thursday, July 8, 2021. China's auto sales rose 27% in the first half of 2021 from a year earlier but still were below pre-pandemic levels, and production and sales fell in June due to global shortages of processor chips, an industry group reported Friday. (Photo by Ng Han Guan/AP Photo) 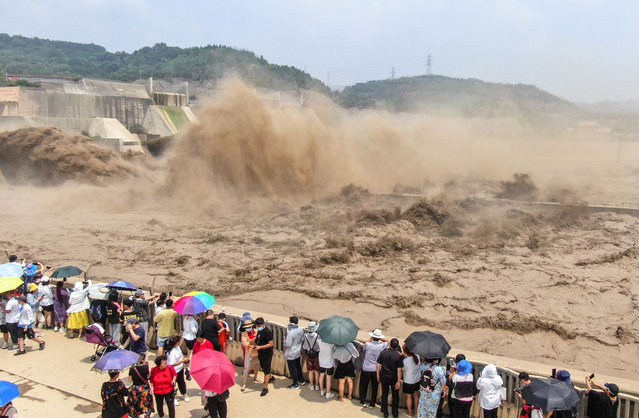 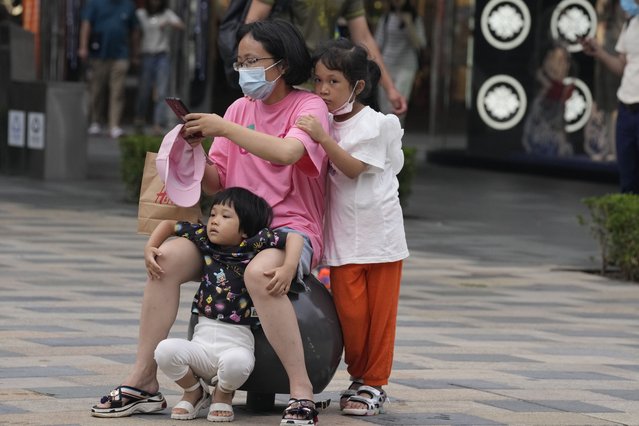 A woman looks at her smartphone at a mall in Beijing, Monday, July 5, 2021. Days after China's largest ride-hailing app Didi Global Inc. went public in New York as the biggest Chinese IPO in the U.S. since Alibaba's 2014 listing, Chinese regulators clamped down on the firm, ordering it to halt new registrations and remove its app from China's app stores while the company undergoes a cybersecurity review. (Photo by Ng Han Guan/AP Photo) 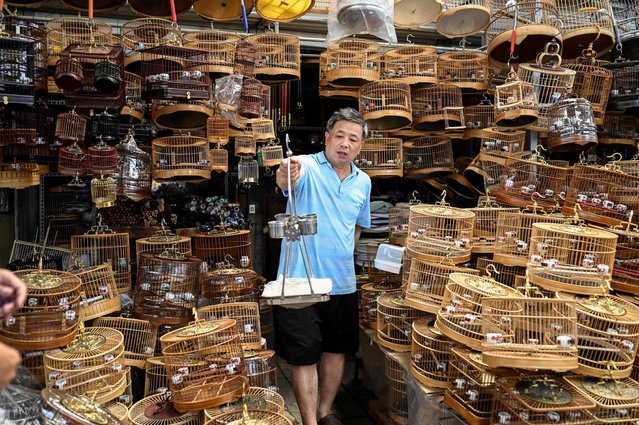 A bird cage vendor shows a bird rack to a customer at a pet market in Beijing on July 7, 2021. (Photo by Jade Gao/AFP Photo) 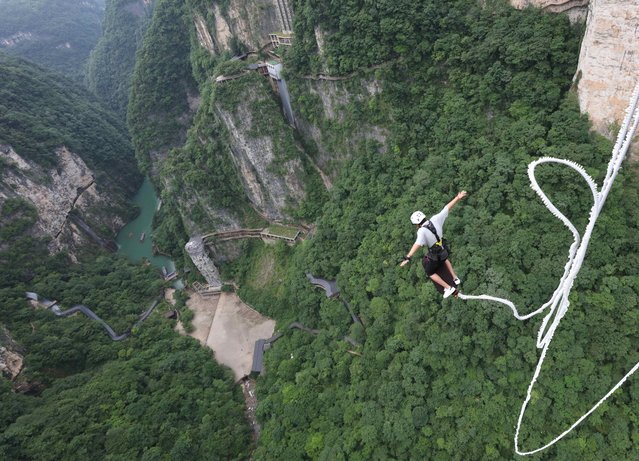 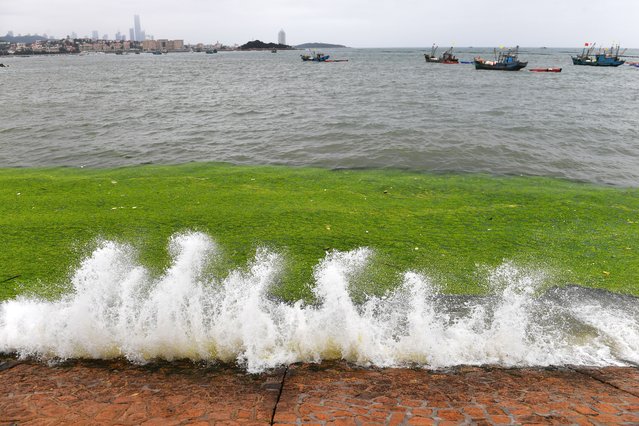 Waves crash on the shore near green algae off the coast of Qingdao in eastern China's Shandong province on June 17, 2021. The northern Chinese port city of Qingdao has deployed thousands of boats and powered scoops to deal with a massive algae bloom that is threatening sea life, tourism and water transport. The thick layer of plants that has coated waters and clogged beaches appeared in june and is reportedly the heaviest on record. (Photo by Chinatopix via AP Photo) 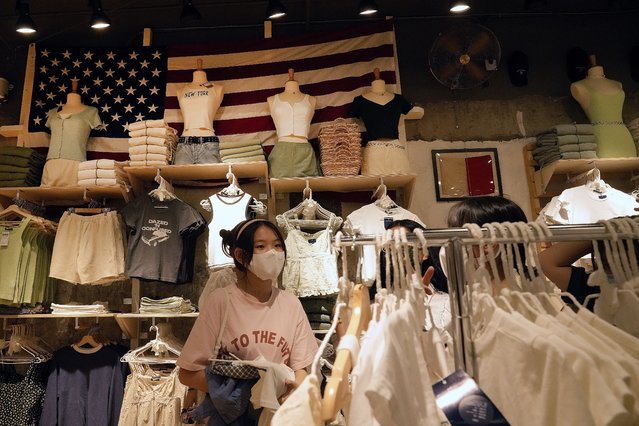 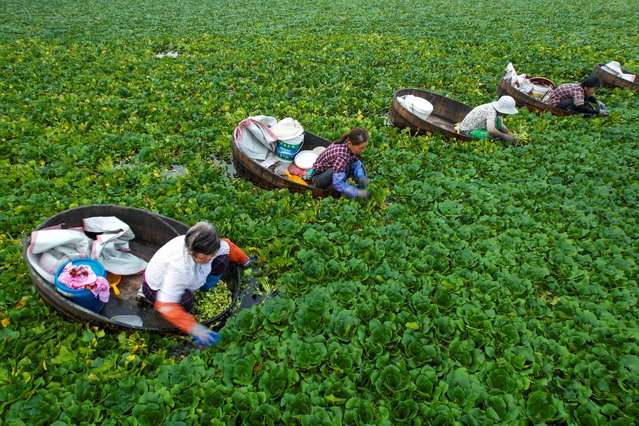 Farmers pick up water chestnuts in a pond in Taizhou, in China's eastern Jiangsu province on July 12, 2021. (Photo by AFP Photo/China Stringer Network) 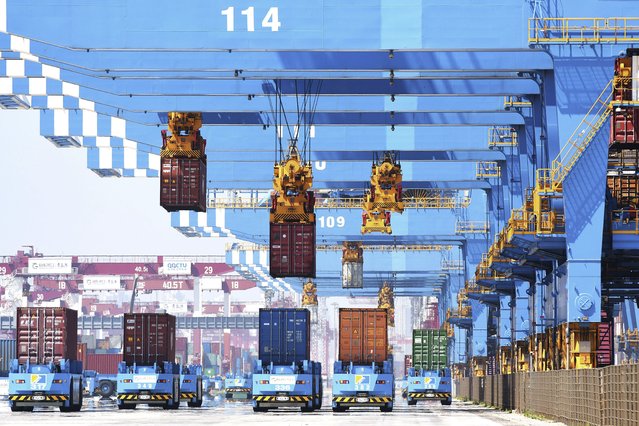 In this June 4, 2021, file photo, gantry cranes move containers onto transporters at a port in Qingdao in eastern China's Shandong province. China’s exports surged in June while import growth slowed to a still-robust level as its economic rebound from the coronavirus leveled off. (Photo by Chinatopix via AP Photo, File) 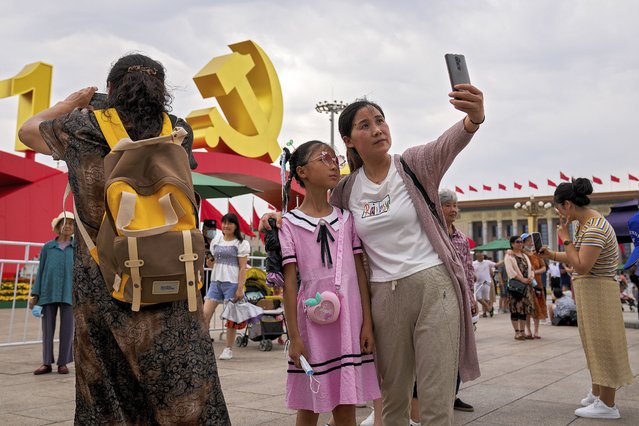 Visitors take souvenir photos with a communist party's logo on display at Tiananmen Square to mark the 100th anniversary of the founding of the ruling Chinese Communist Party in Beijing on Monday, July 5, 2021. Chinese leader Xi Jinping on Tuesday attacked calls from some in the U.S. and its allies to limit their dependency on Chinese suppliers and block the sharing of technologies. (Photo by Andy Wong/AP Photo) 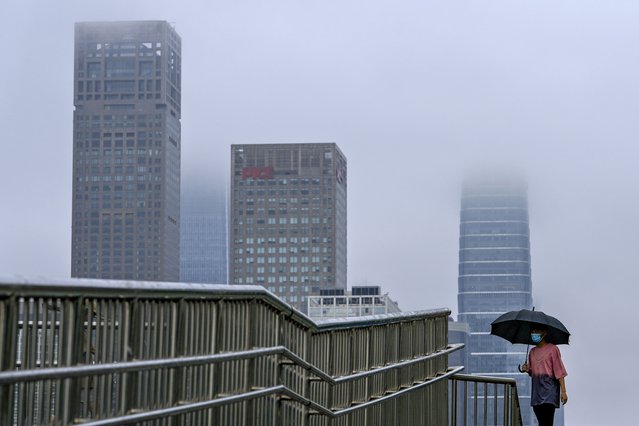 A woman wearing face masks to help curb the spread of the coronavirus hold an umbrella walks on an overhead bridge against the Central Business District in Beijing, Monday, July 12, 2021. (Photo by Andy Wong/AP Photo) 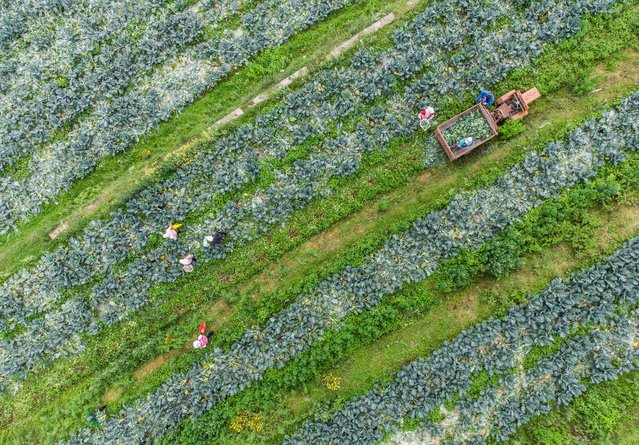 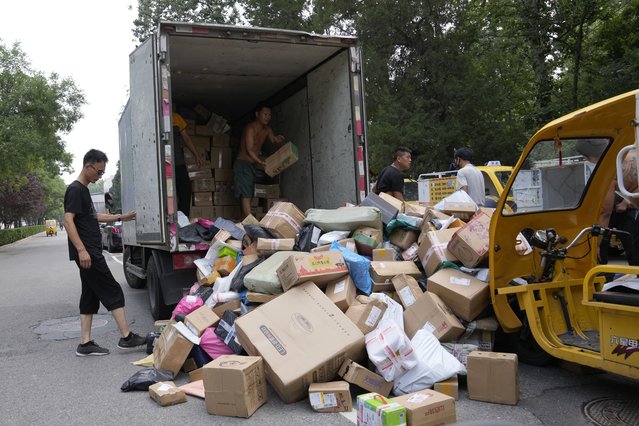 Workers sort out parcels for delivery in Beijing Wednesday, July 14, 2021. China's economic growth slowed to a still-strong 7.9% over a year ago in the three months ending in June as a rebound from the coronavirus leveled off. (Photo by Ng Han Guan/AP Photo) 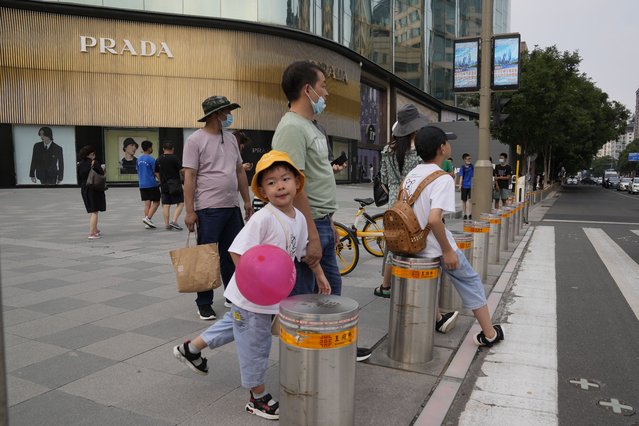 A child waits to cross a road near high end shops at the Wangfujing retail street in Beijing Wednesday, July 14, 2021. (Photo by Ng Han Guan/AP Photo) 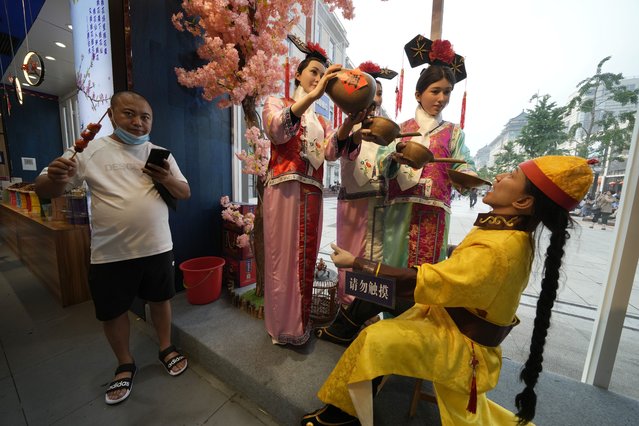 A man eats candied haws near a decoration depicting Chinese concubines feeding the emperor wine at a store along the Wangfujing retail street in Beijing on Wednesday, July 14, 2021. (Photo by Ng Han Guan/AP Photo) 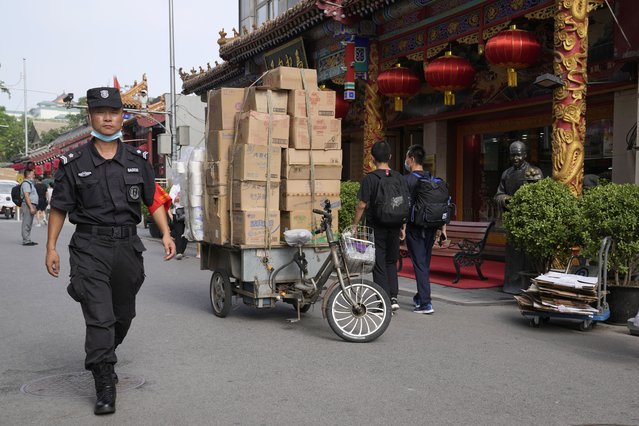 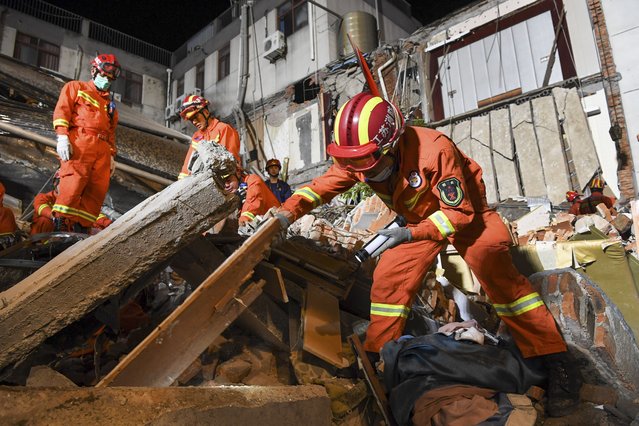 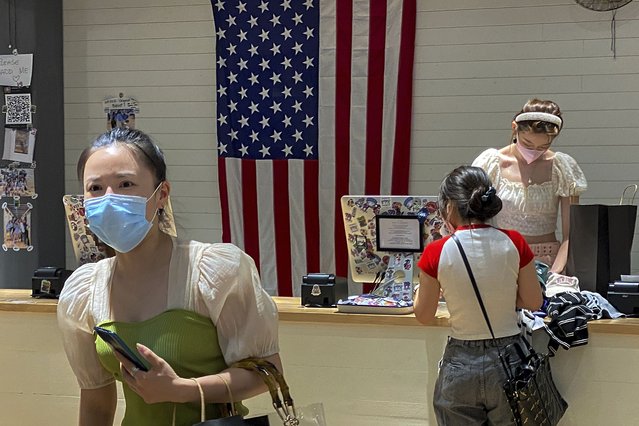 A woman wearing a face mask visits a fashion boutique in Beijing, Sunday, July 11, 2021. China on Sunday said it will take “necessary measures” to respond to the U.S. blacklisting of Chinese companies over their alleged role in abuses of Uyghur people and other Muslim ethnic minorities. (Photo by Andy Wong/AP Photo) 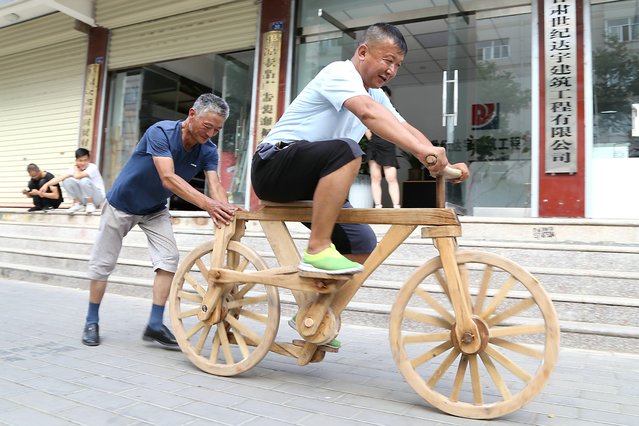 He Yong (L) helps a man ride his self-made wooden bicycle in the street on July 12, 2021 in Pingliang, Gansu Province of China. He Yong, 58, made the bicycle without nails, and all wooden components are connected by Sunmao, one of the oldest and most durable structures which were used in Chinese traditional architecture. (Photo by Zheng Bing/VCG via Getty Images)
Edit Del
15 Jul 2021 09:27:00, post received 0 comments
Publication archive:
←   →
Popular tags:
All tags
Last searches: