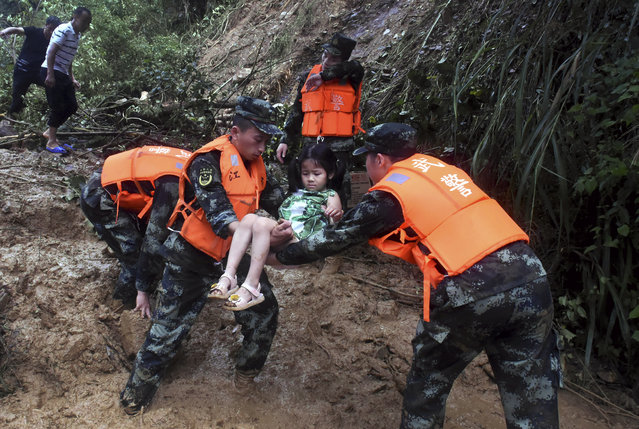 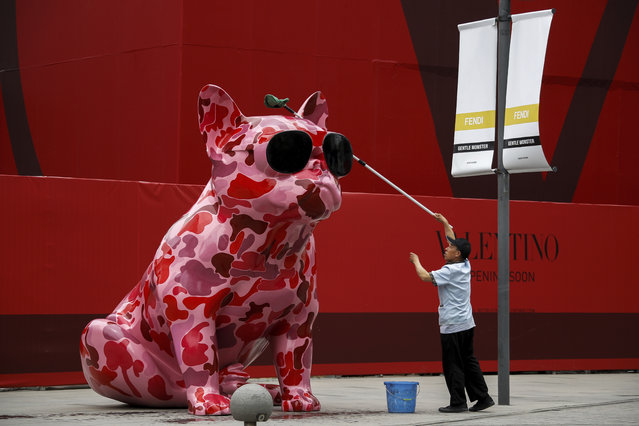 A worker wipes a dog sculpture outside a luxury fashion boutique under construction at the capital city's popular shopping mall in Beijing, Wednesday, June 5, 2019. Amid the trade war with the United States, Chinese President Xi Jinping is expressing confidence in the resilience of the Chinese economy. (Photo by Andy Wong/AP Photo) 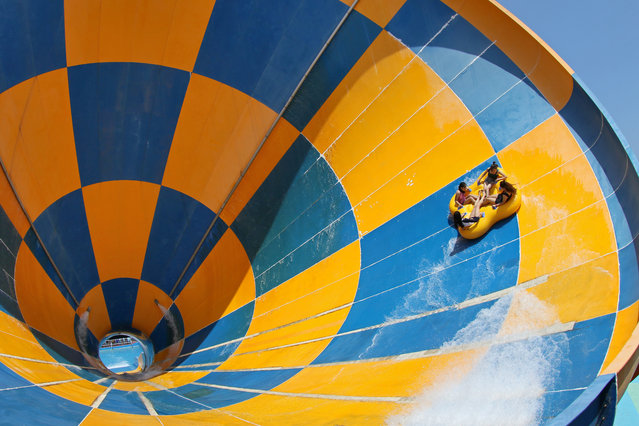 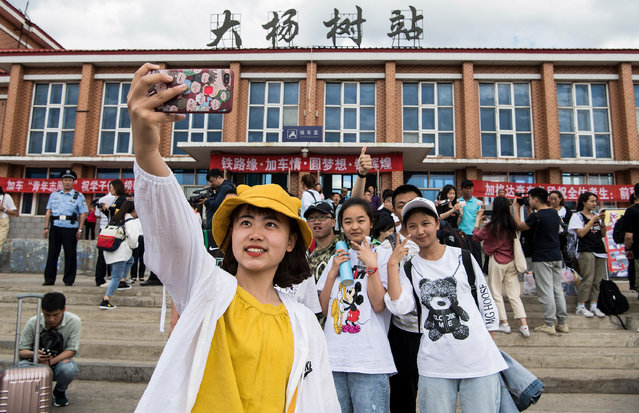 Students take photos as they wait for a “gaokao train” at Dayangshu township on June 5, 2019 in the Inner Mongolia Autonomous Region, China. The special train operates only once a year and takes 450 students from Dayangshu of North China's Greater Hinggan Mountains to Alihe, a town 135 kilometers away. Dayangshu lies in the southern part of Inner Mongolia's Greater Hinggan Mountains and is inhabited by Oroqen, Daur and Ewenki ethnic groups. The town is too small to have its own test center, so students travel to Alihe for the gaokao. Gaokao, the national college entrance examination, takes place on June 7 and 8 and determines which universities students can go to. More than 10 million students have registered this year, Minister of Education Chen Baosheng said. (Photo by Tao Zhang/Getty Images) 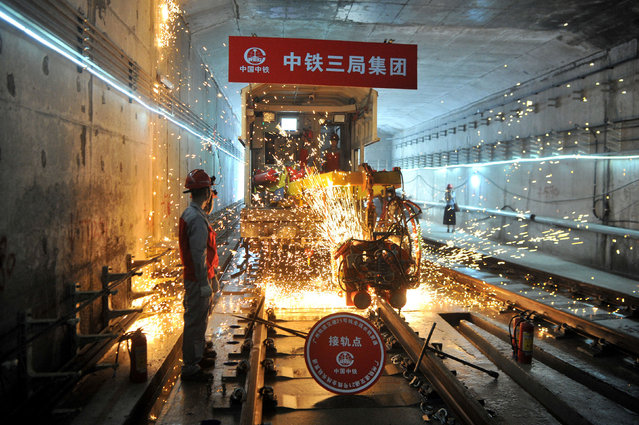 Workers on the tracks of a metro line under construction in Guangzhou, China on June 5, 2019. (Photo by Reuters/China Stringer Network) 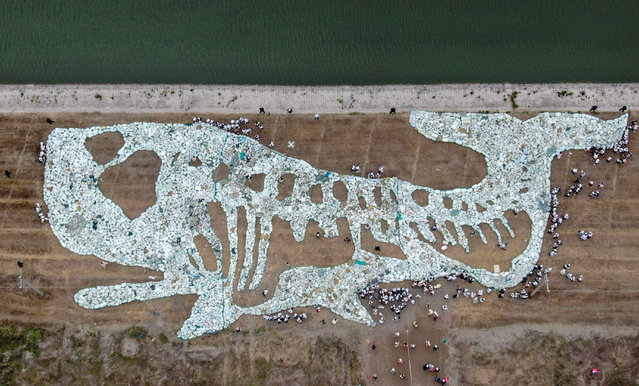 This aerial photo taken on June 10, 2019 shows a 68-metre long image of a whale formed by plastic waste collected from the ocean during an event to raise awareness on ocean conservation at Rudong Yangkou Harbour in Nantong in China's eastern Jiangsu province. (Photo by AFP Photo/China Stringer Network) 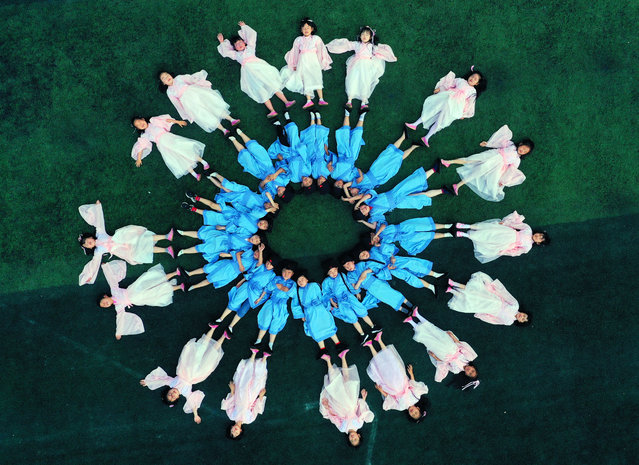 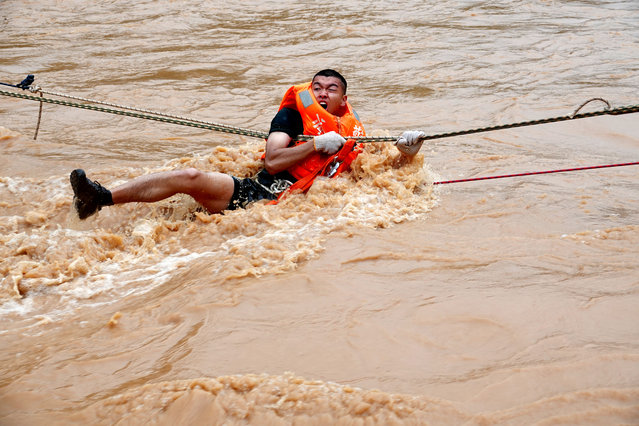 Chinese rescuers evacuate a local resident in floodwater caused by a heavy rainstorm in Heyuan city, south China's Guangdong province, 13 June 2019. At least 24 people are dead with others missing after yet another round of heavy rain struck southern China. More downpours threaten to exacerbate the flooding situation across the region through the remainder of the month. An estimated 2.2 million people have been affected by the onslaught of heavy rain and flooding that commenced last Thursday, according to UPI. (Photo by Feature China/Barcroft Media/Imaginechina via AP Images) 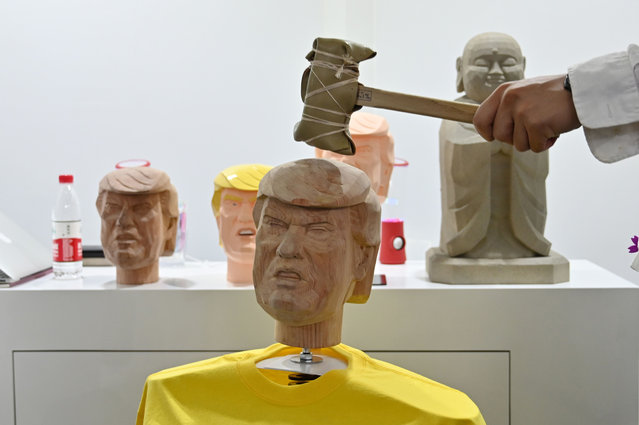 A man hits a bobble head in the likeness of US President Donald Trump as part of a “stress relief station” from a Japanese company during the Consumer Electronics Show, Ces Asia 2019 in Shanghai on June 11, 2019. (Photo by Héctor Retamal/AFP Photo) 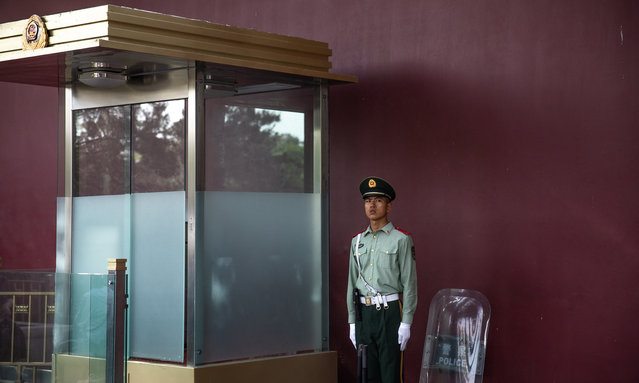 A Chinese People's Liberation Army (PLA) soldier stands guard near the Tiananmen Square in Beijing, China, 16 May 2019. This year, 04 June 2019 marks the 30th anniversary of the 1989 Tiananmen Square protests. Between 15 April and 04 June 1989, students, intellectuals, and activists engaged in a series of demonstrations against the Chinese Communist Party where the subsequent crackdown by authorities caused a vast number of civilians' deaths and injuries. The Tiananmen Square protests remains one of the most sensitive and most widely censored topics in China. (Photo by Roman Pilipey/EPA/EFE) 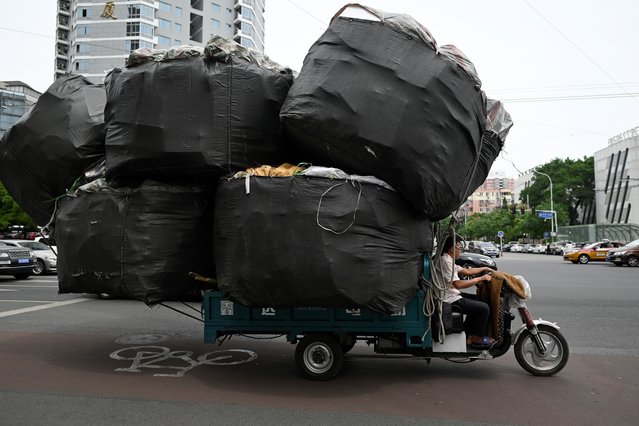 A man rides an electric tricycle loaded with goods on a street in Beijing on June 5, 2019. (Photo by Wang Zhao/AFP Photo) 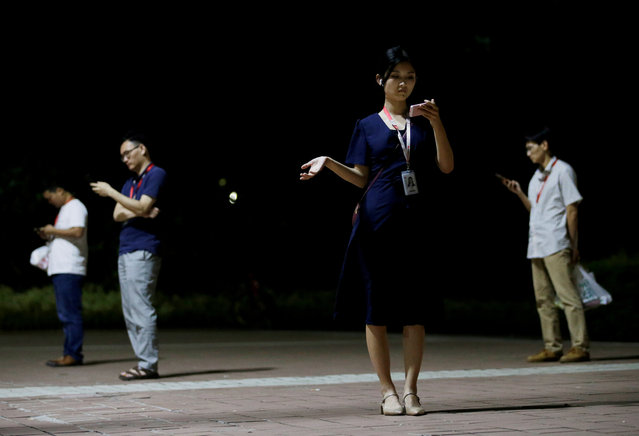 An employee learns to dance from an app as she waits for a taxi after work overtime at Huawei headquarters in Shenzhen, Guangdong province, China on May 29, 2019. (Photo by Jason Lee/Reuters) 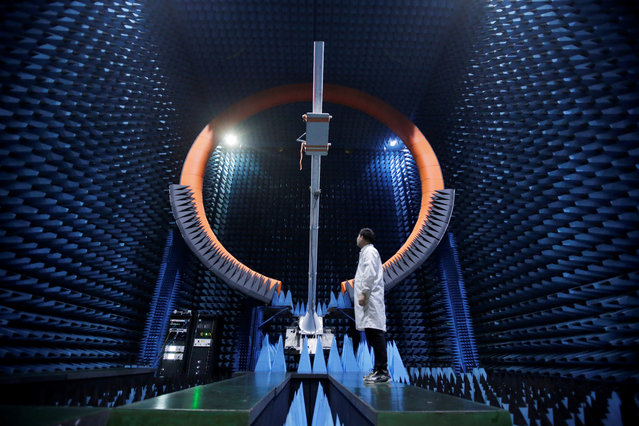 An engineer stands under a base station antenna of 5G in Huawei's SG178 multi-probe spherical near-field testing system at its Songshan Lake Manufacturing Center in Dongguan, Guangdong province, China on May 30, 2019. (Photo by Jason Lee/Reuters) 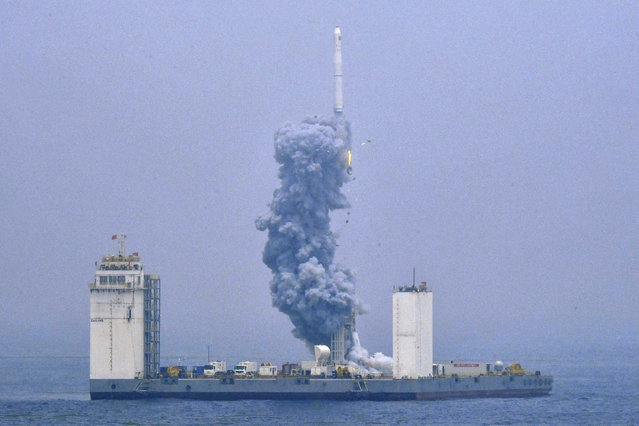 In this photo released by Xinhua News Agency, a Long March-11 solid propellant carrier rocket blasts off from a mobile launch platform in the Yellow Sea off east China's Shandong Province, Wednesday, June 5, 2019. China has for the first time launched a rocket from a mobile platform in the Yellow Sea, sending a five commercial satellites and two others containing experimental technology into space. (Photo by Zhu Zheng/Xinhua via AP Photo) 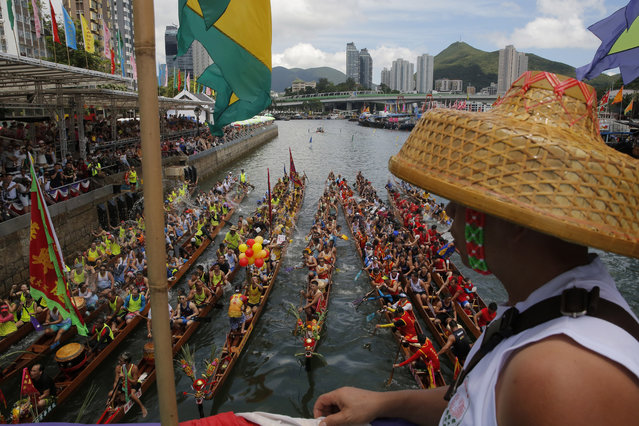 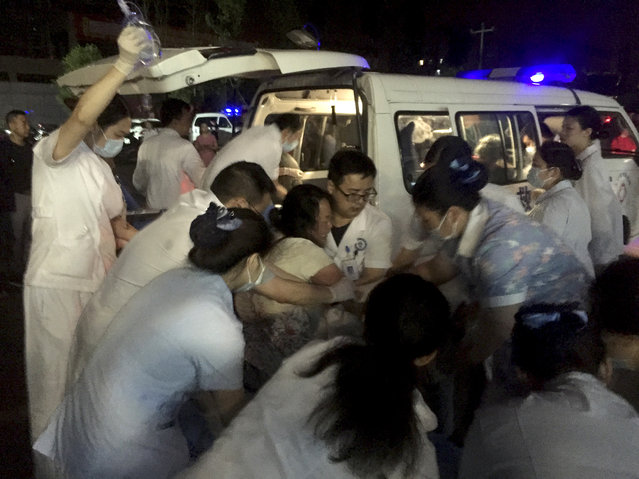 In this photo released by Xinhua News Agency, medical staff tend to a wounded at a local hospital in the aftermath of an earthquake in Changning County of Yibin City, southwest China's Sichuan Province, early Tuesday, June 18, 2019. The strong earthquake that hit Sichuan province in southern China late Monday night killed and injured some, officials and news reports said. (Photo by Wan Min/Xinhua via AP Photo) 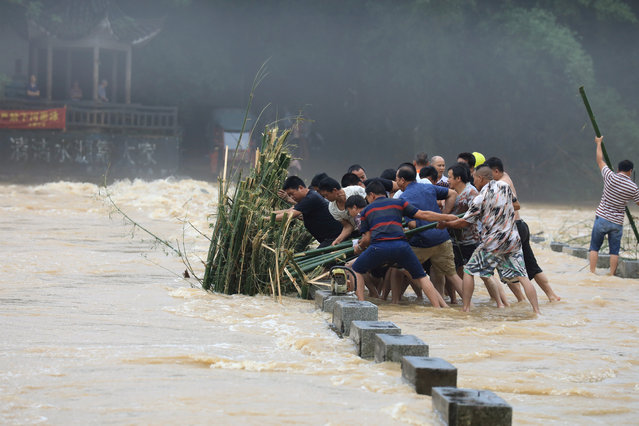 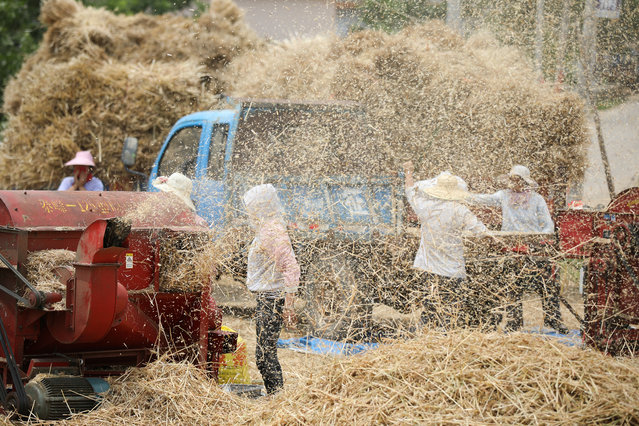 Farmers work next to a thresher threshing newly harvested wheat at a farm in Zaozhuang, Shandong province, China on June 5, 2019. (Photo by Reuters/China Stringer Network) 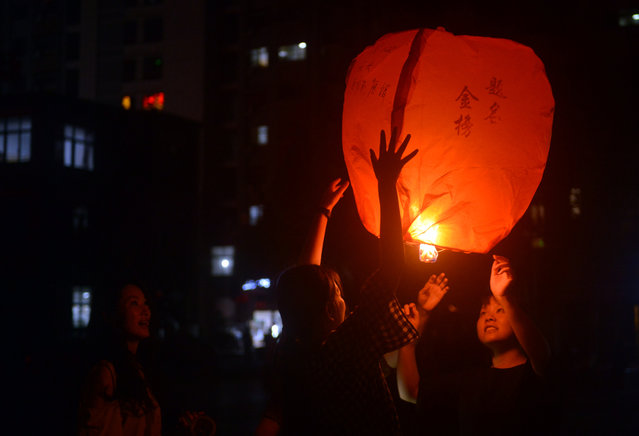 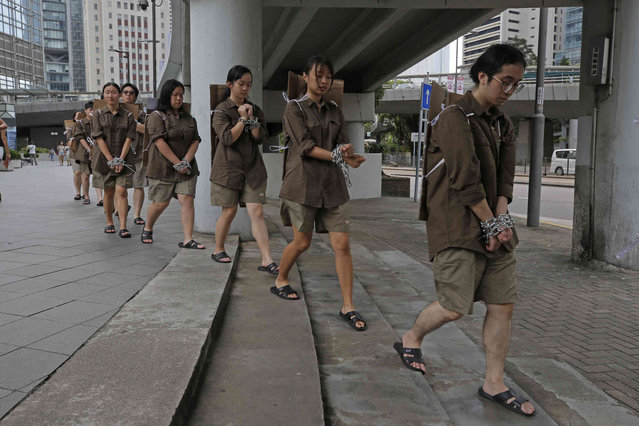 Students in chains march to protest the extradition bill in Hong Kong, Saturday, June 8, 2019. The extradition law has aroused concerns that this legislation would undermine the city's independent judicial system as it allows Hong Kong to hand over fugitives to the jurisdictions that the city doesn't currently have an extradition agreement with, including mainland China, where a fair trial might not be guaranteed. (Photo by Kin Cheung/AP Photo) 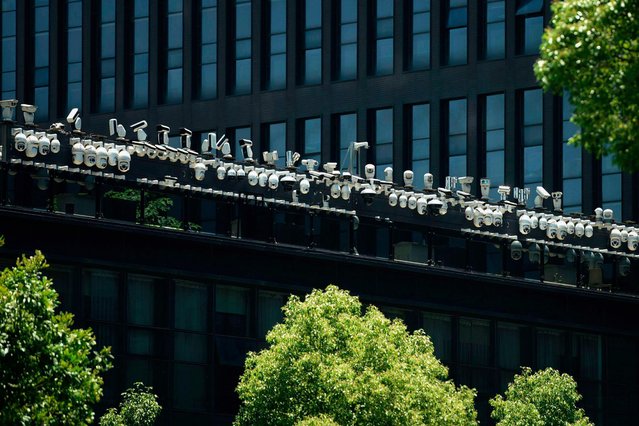 This picture shows surveillance cameras being installed on the rooftop of a office building in Hangzhou, in east China's Zhejiang province on May 29, 2019. (Photo by AFP Photo/Stringer) 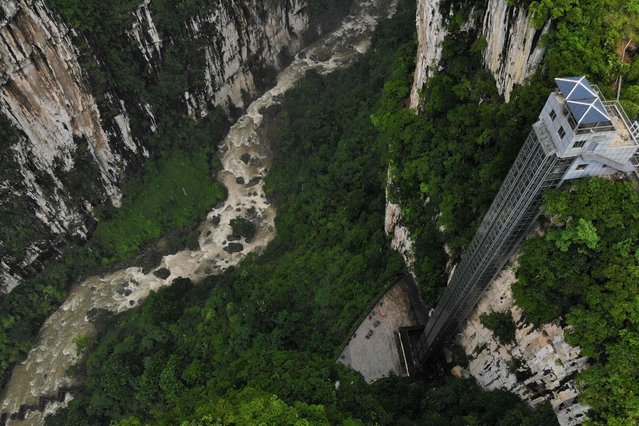 This aerial photo taken on June 18, 2019 shows the Zhijin Grand Canyon sightseeing elevator in Bijie, in southwest China's Guizhou Province. The 108 meter high elevator, which connects the upper and lower levels of the canyon, went into service in 2014. (Photo by AFP Photo/China Stringer Network) 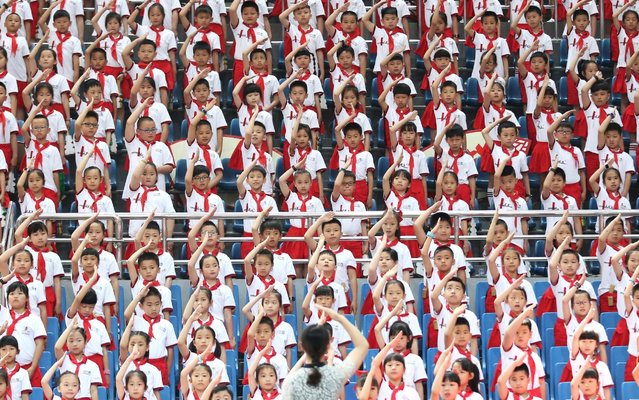 Young pioneers from a primary school salute during an event to celebrate Children's Day, which falls in Quanzhou, Fujian province, China on June 1, 2019. (Photo by Reuters/China Stringer Network) 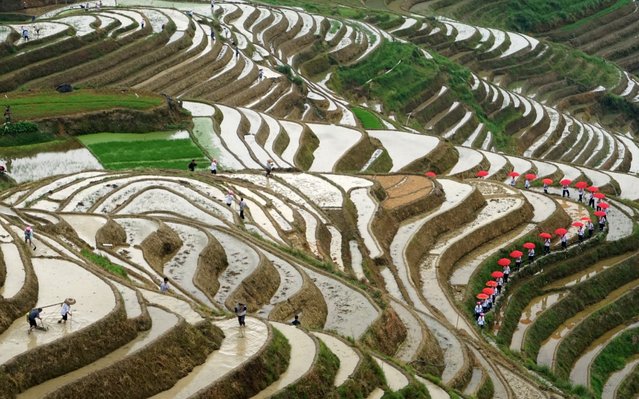