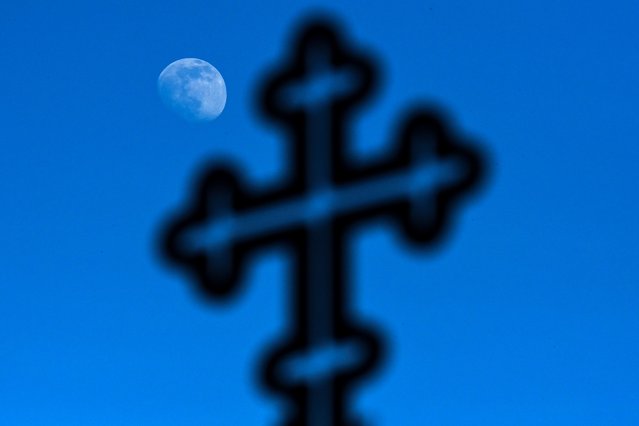 The moon is pictured behind a cross in Moscow on March 25, 2021. (Photo by Kirill Kudryavtsev/AFP Photo) 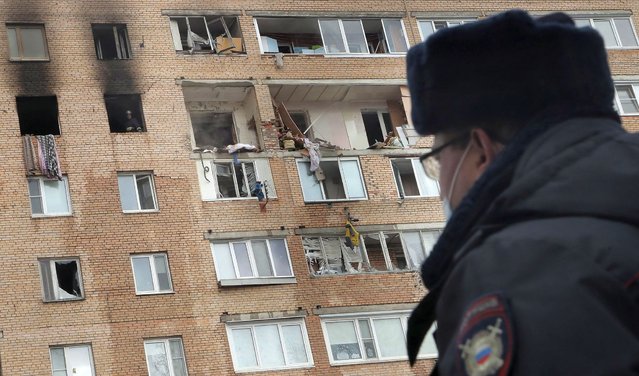 A policeman looks at a nine-storey residential building in the aftermath of an explosion, in Khimki, outskirts of Moscow, Russia, 19 March 2021. A gas explosion at an apartment caused a collapse between the 8th and 9th floor of the complex. A man and a child were found dead. (Photo by Maxim Shipenkov/EPA/EFE) 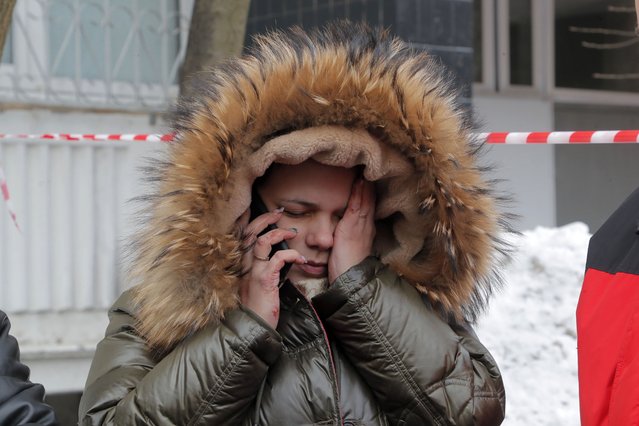 A woman reacts in the aftermath of an explosion at a nine-storey residential building in Khimki, outskirts of Moscow, Russia, 19 March 2021. (Photo by Maxim Shipenkov/EPA/EFE) 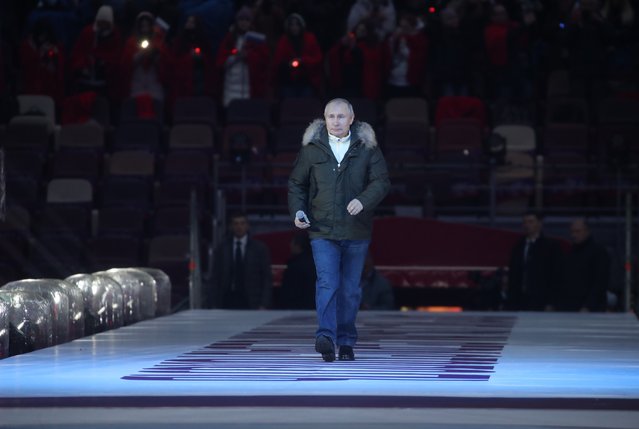 Russian President Vladimir Putin arrives to attend a concert marking the seventh anniversary of the referendum on the state status of Crimea and Sevastopol and its reunification with Russia, in Moscow, Russia, Thursday, March 18, 2021. (Photoby Vyacheslav Prokofyev, Sputnik, Kremlin Pool Photo via AP Photo) 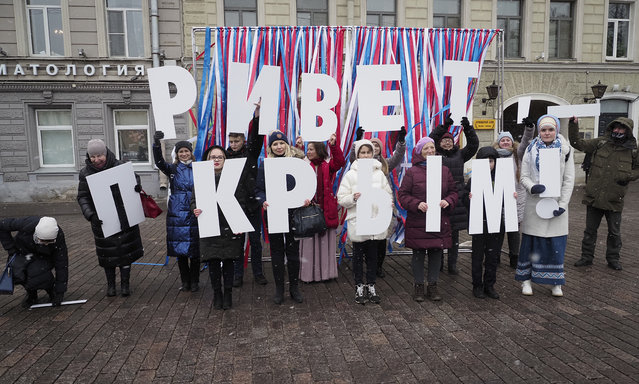 Members of pro-Kremlin organisations hold letters reading “Hello Crimea” during celebration of the anniversary of Crimea annexation from Ukraine in 2014, in St. Petersburg, Russia, Thursday, March 18, 2021. Residents of cities in Crimea and Russia are holding gatherings to commemorate the seventh anniversary of Russia's annexation of the Black Sea peninsula from Ukraine. (Photo by Dmitri Lovetsky/AP Photo) 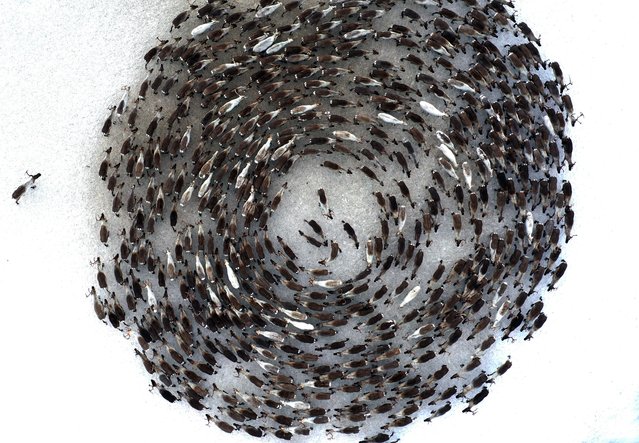 Deer in a corral before anthrax vaccination performed by the regional state veterinary service in the village of Lovozero in Murmansk Region, Russia on March 24, 2021. (Photo by Lev Fedoseyev/TASS) 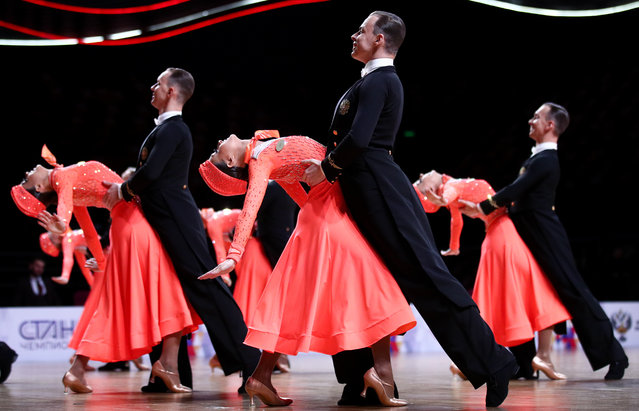 Members of the Duet team (Perm) perform the Welcome Aboard routine at the 2021 Russian Dancesport Championships at Irina Viner-Usmanova Gymnastics Palace in Moscow, Russia on March 23, 2021. (Photo by Sergei Bobylev/TASS) 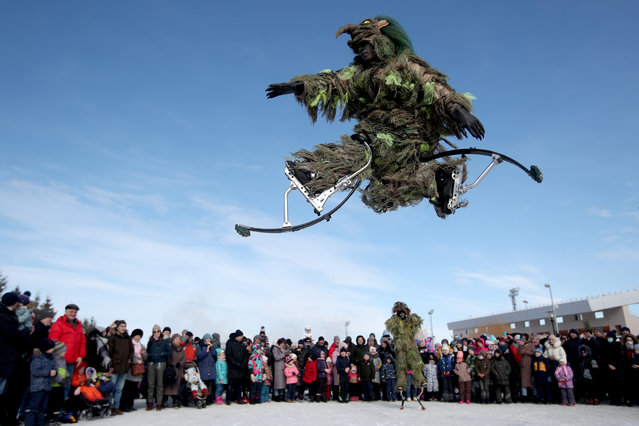 Men on jumping stilts perform during Nowruz celebrations at the Kazan multifunctional equestrian center on March 21, 2021. Nowruz, also known as the Iranian or the Persian New Year, commemorates the first day of spring; it is celebrated by various Turkic and Iranian ethnic groups on the spring equinox (March 21). (Photo by Yegor Aleyev/TASS) 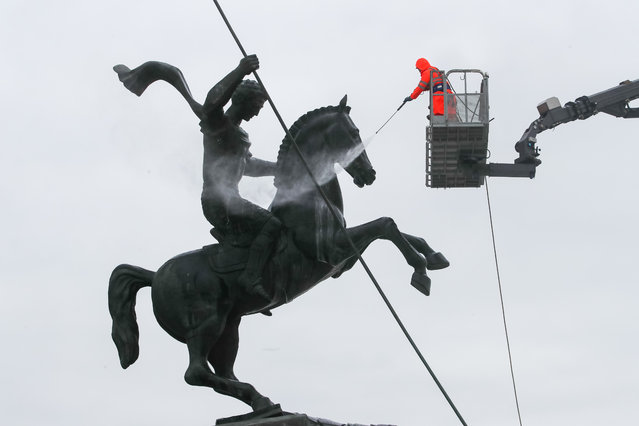 A Gormost worker power washes an equestrian statue of St George at the Victory monument during spring cleaning at the WWII memorial on Poklonnaya Gora in Moscow, Russia on March 17, 2021. (Photo by Sergei Karpukhin/TASS) 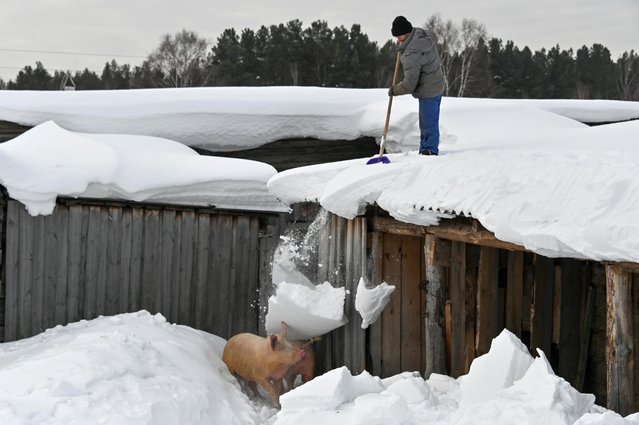 A local resident stands on the roof of a wooden building while removing snow, which falls down on pigs in a courtyard in the village of Bobrovka in Omsk Region, Russia on March 18, 2021. (Photo by Alexey Malgavko/Reuters) 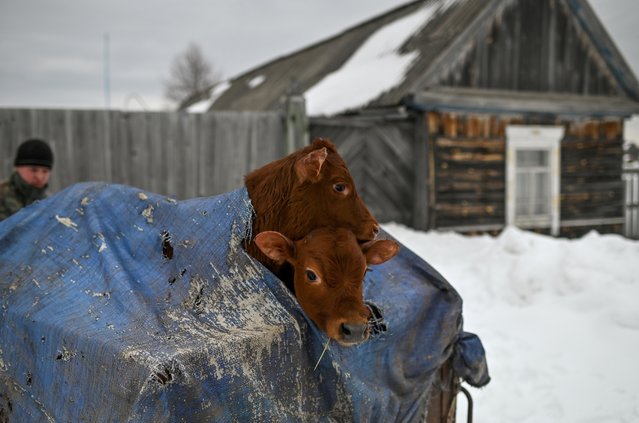 Calves look out as they are transported in a cart in the village of Litkovka, in Omsk region, Russia on March 20, 2021. (Photo by Alexey Malgavko/Reuters) 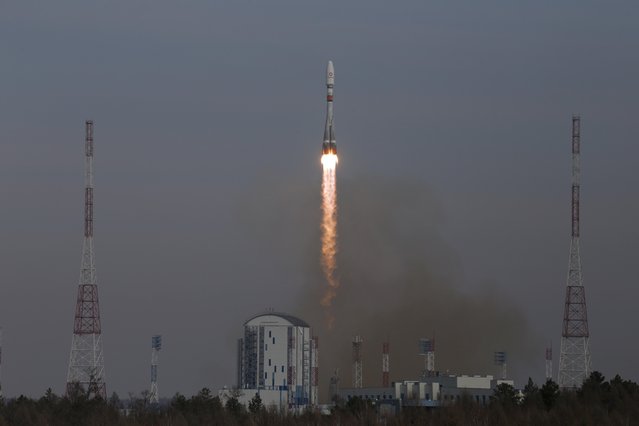 A Soyuz-2.1b carrier rocket with a Fregat upper stage block and 36 OneWeb satellites blasts off from a launch pad of Vostochny Cosmodrome in Amur Region, Russia on March 25, 2021. (Photo by Yuri Smityuk/TASS) 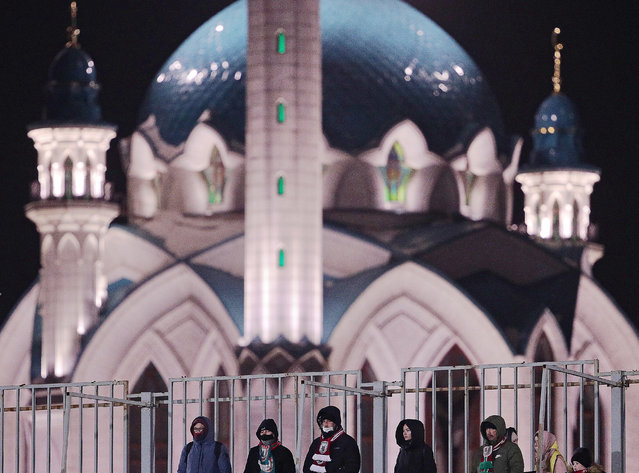 Rubin Kazan supporters are seen during a 2020/2021 Russian Premier League Round 23 football match between Rubin Kazan and FC Khimki at Central Stadium in Kazan, Russia on March 19, 2021. Seen behind is Kul Sharif Mosque. (Photo by Yegor Aleyev/TASS) 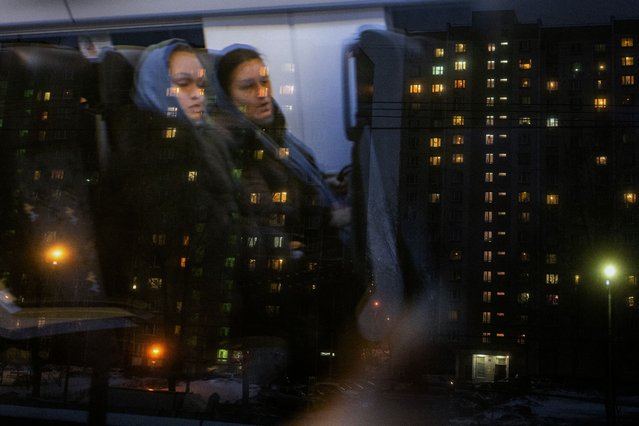 This picture taken on March 15, 2021, shows two women traveling by train on the outskirts of Moscow. (Photo by Dimitar Dilkoff/AFP Photo) 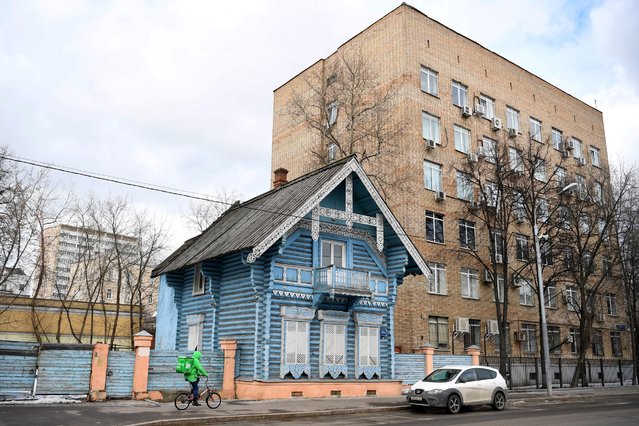 A food delivery courier cycles past a wooden house in Moscow on March 19, 2021. (Photo by Natalia Kolesnikova/AFP Photo) 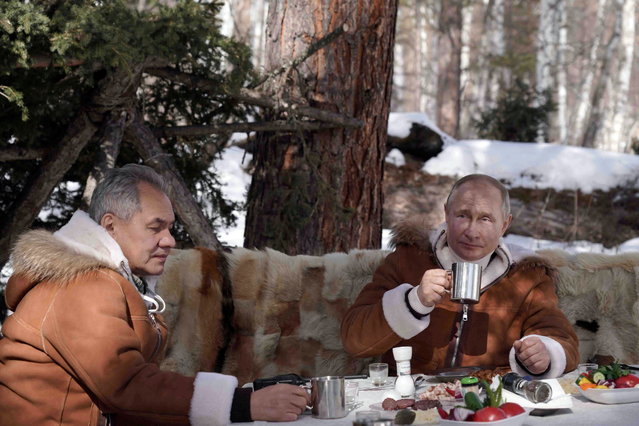 Russian President Vladimir Putin and Defence Minister Sergei Shoigu sit at a table during a holiday in the Siberian taiga, Russia on March 21, 2021. (Photo by Alexei Druzhinin/Sputnik/Kremlin via Reuters) 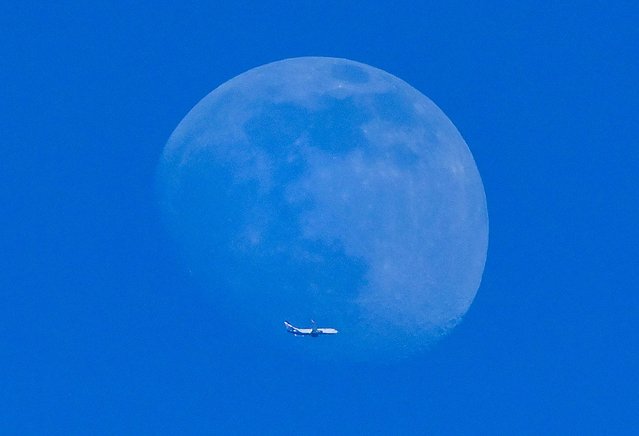 The silhouette of an airplane is seen in front of the moon in Moscow on March 25, 2021. (Photo by Yuri Kadobnov/AFP Photo) 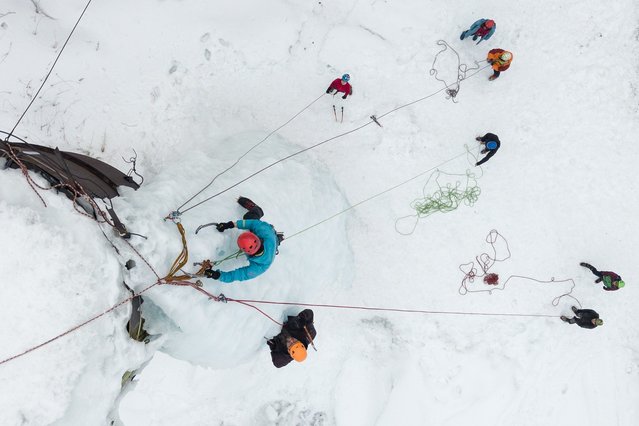 Members of Novosibirsk tourist clubs climb a frozen water tower during the ice training, in the Toguchinsky district of the Novosibirsk region, Russia on March 21, 2021. (Photo by Alexandr Kryazhev/Sputnik/Profimedia) 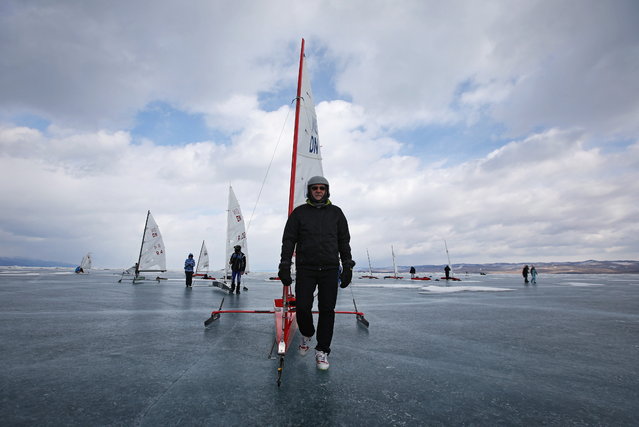 Participants compete on the ice of frozen Lake Baikal during the Baikal ice sailing cup in Irkutsk Region, Russia on March 23, 2021. (Photo by Yuri Novikov/Reuters) 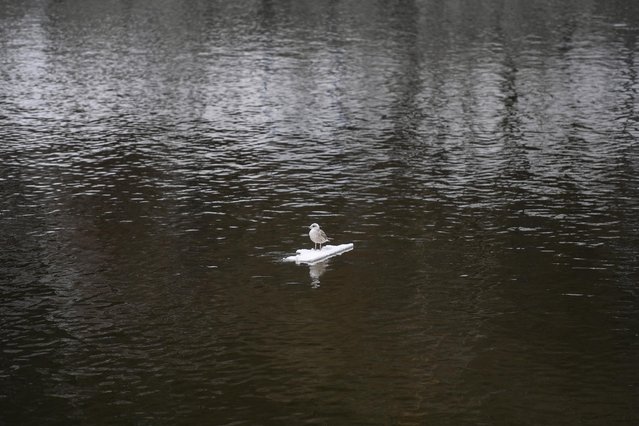