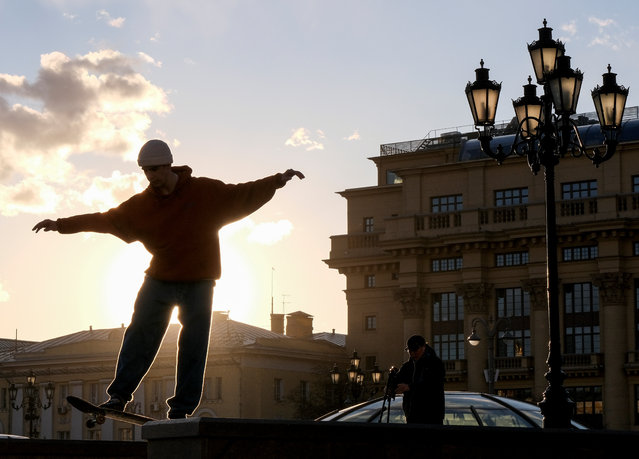 A skateboarder performs a trick in Manezh Square in central Moscow, Russia on March 19, 2020. (Photo by Evgenia Novozhenina/Reuters) 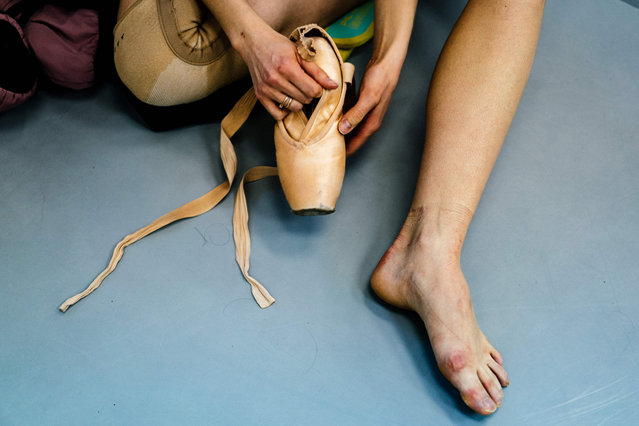 Dancer Alexandra Kirshina rehearses on pointes made at Grishko company especially for her in Moscow on February 25, 2020. Born in the chaos of the collapse of the Soviet Union, the Grishko family business has emerged among the top makers in the world of dance shoes, notably classic ballet pointe shoes, worn on the world's great stages. (Photo by Dimitar Dilkoff/AFP Photo) 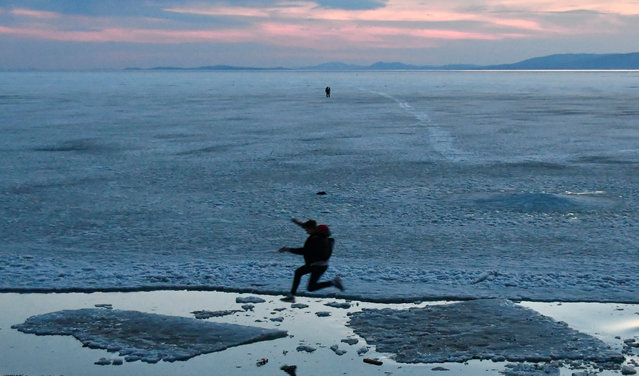 A teenager jumps from floe to floe during an ice drift in Amur Bay in the far eastern city of Vladivostok, Russia on March 22, 2020. (Photo by Yuri Maltsev/Reuters) 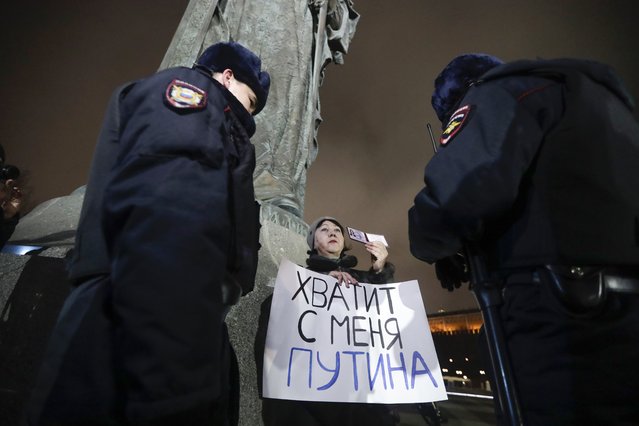 Police officers check a protester's ID as she holds a poster that reads: “Enough Putin for me” while taking part in a one-man protest in front of the monument of the Prince Vladimir next to the Kremlin in Moscow, Russia, Wednesday, March 11, 2020. The constitutional reform passed by the Duma on Wednesday would allow Putin to run for presidency two more times after 2024. Before the national vote, it will be reviewed by Russia's Constitutional Court. (Photo by Pavel Golovkin/AP Photo) 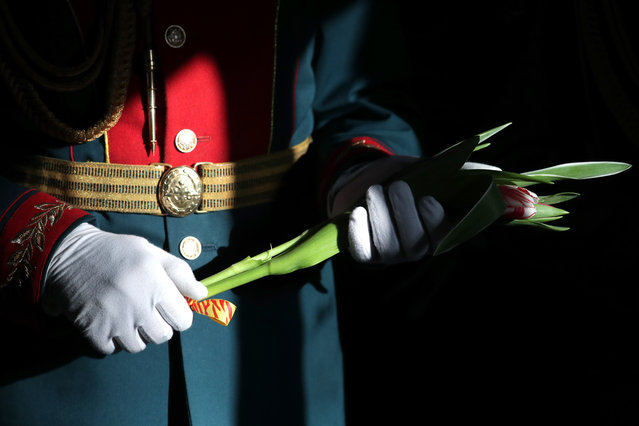 A servicewoman of a Russian Army joint all-female platoon during preparation for a Victory Day parade in 13th Military Station in Yekaterinburg, Russia on March 5, 2020. (Photo by Donat Sorokin/TASS) 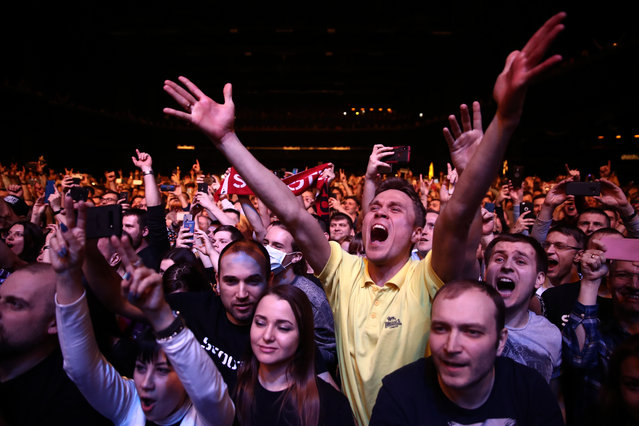 People attend a concert by the German rave and techno music band Scooter as part of the God Save The Rave Tour at the Adrenaline Stadium Club in Moscow, Russia on March 14, 2020. (Photo by Sergei Fadeichev/TASS) 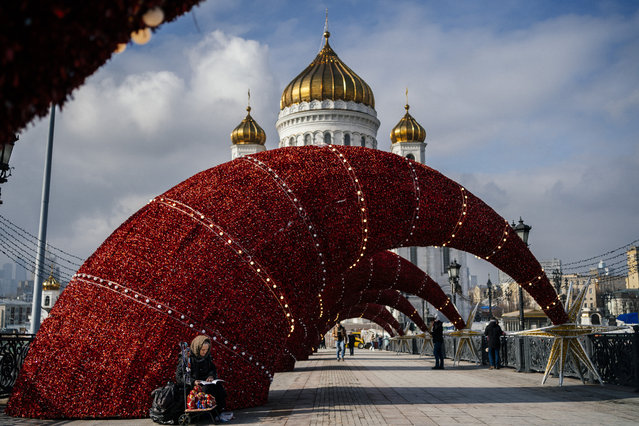 An elderly woman reads while selling traditional Russian wooden nesting dolls, called Matryoshka dolls, on a bridge over the Moskva river in front of the Cathedral of Christ the Saviour in downtown Moscow on March 4, 2020. (Photo by Dimitar Dilkoff/AFP Photo) 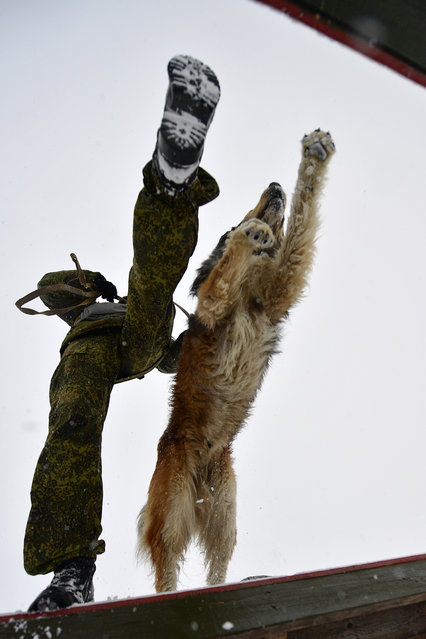 A dog handler and a service dog take part in a competition of Stage 1 of the True Friend contest at a training canine base of an armored infantry unit of the integrated combined arms force of the Russian Eastern Military District in Ussuriysk, Primorye Territory, Russia on March 4, 2020. (Photo by Yuri Smityuk/TASS) 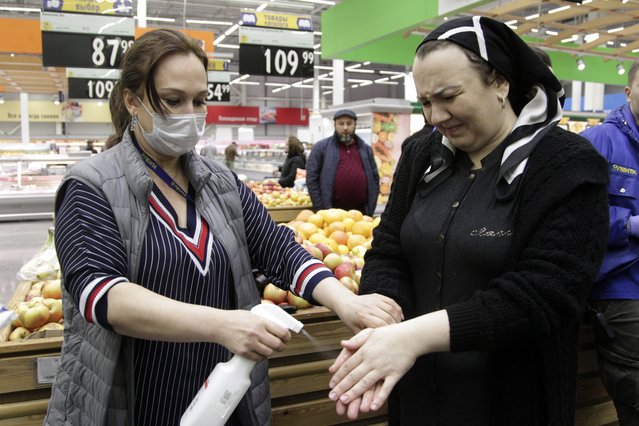 In this Monday, March 16, 2020, photo, a food mall staff, left, wearing a medical mask disinfects hands of a shopper in Chechen province capital Grozny, Russia. The Russian government says that it has decided to bar entry to all foreigners starting Wednesday. For most people, the new coronavirus causes only mild or moderate symptoms, such as fever and cough. For some, especially older adults and people with existing health problems, it can cause more severe illness, including pneumonia. (Photo by Musa Sadulayev/AP Photo) 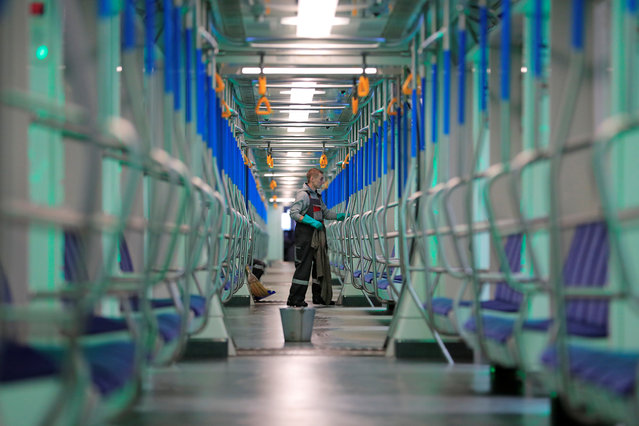 An employee wearing a protective face mask cleans and disinfects a subway train, as part of measures to prevent the spread of coronavirus (COVID-19) in Moscow, Russia on March 16, 2020. (Photo by Tatyana Makeyeva/Reuters) 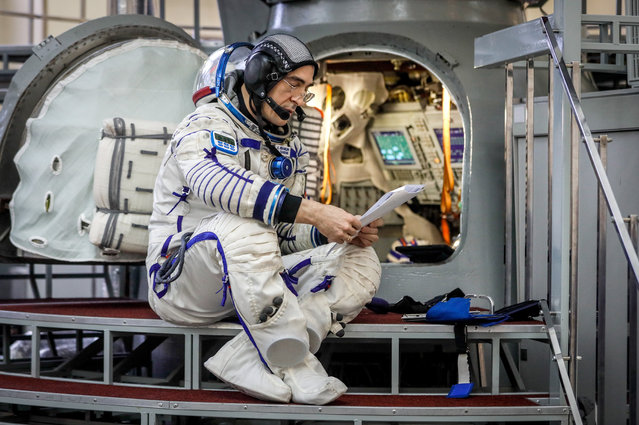 Member of the International Space Station (ISS) expedition Ivan Vagner attends his final exams at the Russian cosmonaut training center in Star City outside Moscow, Russia, 12 March 2019. The launch of the mission is scheduled for 09 April from the Baikonur Cosmodrome in Kazakhstan. (Photo by Yuri Kochetkov/EPA/EFE) 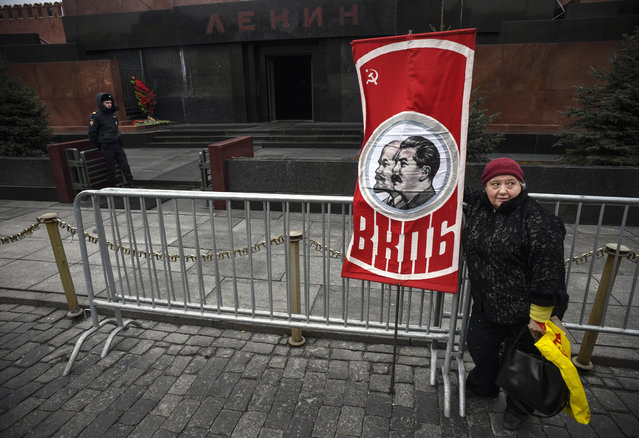 A Russian Communist party supporter holds a banner with portraits of Soviet leaders Vladimir Lenin and Joseph Stalin during a memorial ceremony at Stalin's tomb marking the 67th anniversary of his death at Red Square in Moscow on March 5, 2020. While historians blame Stalin for the deaths of millions in purges, prison camps and forced collectivization, many in Russia still praise him for leading the Soviet Union to victory over Nazi Germany in World War II. (Photo by Alexander Nemenov/AFP Photo) 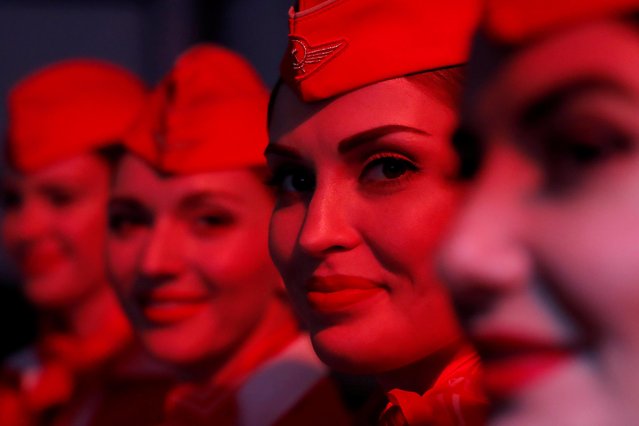 Stewardesses pose for a picture before a presentation ceremony for the first Airbus A350-900 aircraft of Aeroflot at Sheremetyevo International Airport outside Moscow, Russia on March 4, 2020. (Photo by Maxim Shemetov/Reuters) 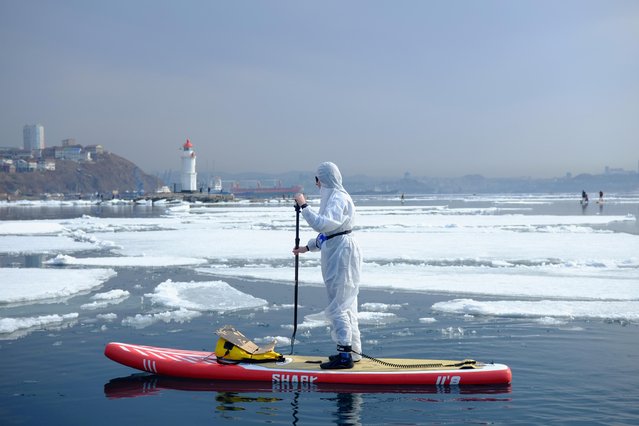 A sup surfer wearing a protective suit as a show of support for the people fighting against the spread of coronavirus disease takes part at an annual “Hijacking an ice floe” event marking the opening of the stand up paddle boarding season in Vladivostok, Russia on March 21, 2020. (Photo by Ivan Belozyorov/Reuters) 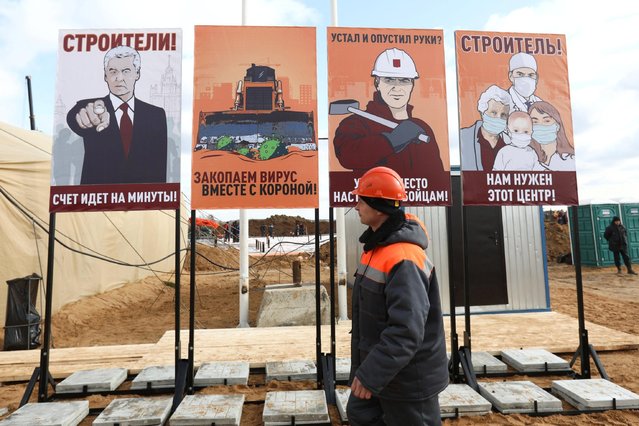 A construction worker walks past motivational placards designed in the style of Soviet propaganda posters at a construction site where a new hospital is being built on the outskirts of Moscow, Russia on March 21, 2020. The placard (L) depicting Mayor of Moscow Sergei Sobyanin reads: “Builders! Every minute counts!”. (Photo by Kirill Zykov/Moscow News Agency/Handout via Reuters) 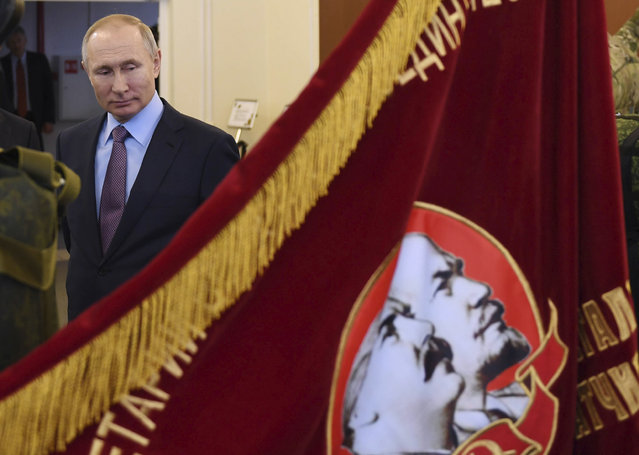 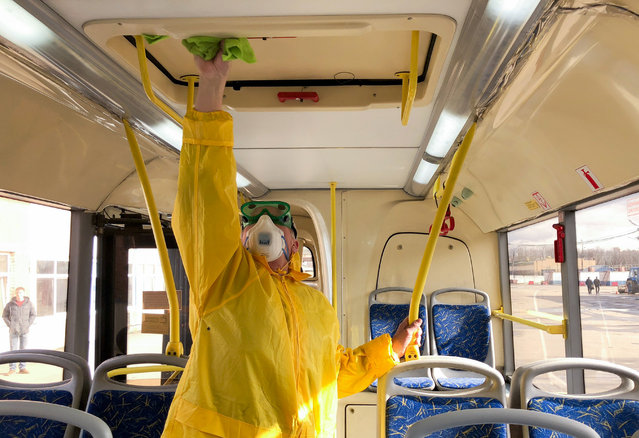 In this photo taken on Thursday, March 12, 2020, A bus depot employee disinfects a bus in Moscow, Russia. For most people, the new COVID-19 coronavirus causes only mild or moderate symptoms, such as fever and cough. For some, especially older adults and people with existing health problems, it can cause more severe illness, including pneumonia. (Photo by Denis Voronin, Moscow News Agency photo via AP Photo) 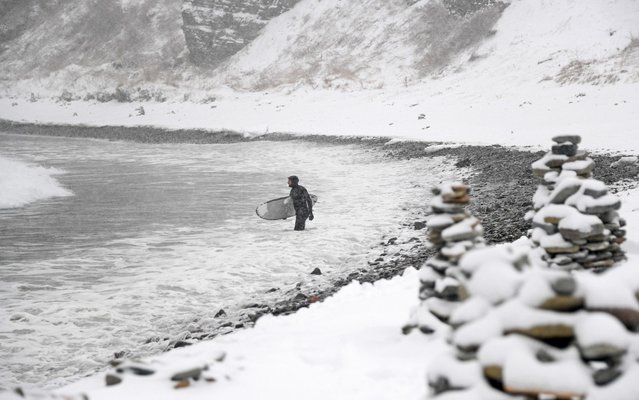 A surfer in Ussuri Bay during a snowfall on the south-eastern coast of Russky Island, Russia on March 4, 2020. Originally a part of indigenous Hawaiian culture, surfing first came to Europe in 1767. (Photo by Yuri Smityuk/TASS) 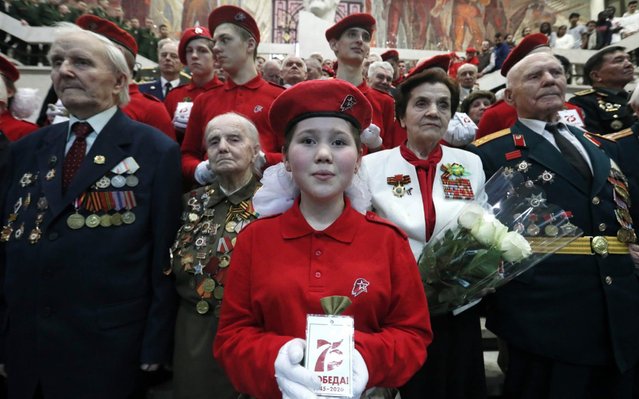 WWII veterans attend a ceremony to place tobacco pouches of soil from WWII mass graves of Red Army soldiers abroad, in the custody of the Central Armed Forces Museum in Moscow, Russia on March 6, 2020. The grave soil has been brought from Abkhazia, Germany, Kyrgyzstan, US, Ukraine, France, Estonia, Mongolia, Bulgaria, UK, Uzbekistan and South Ossetia. (Photo by Alexander Shcherbak/TASS) 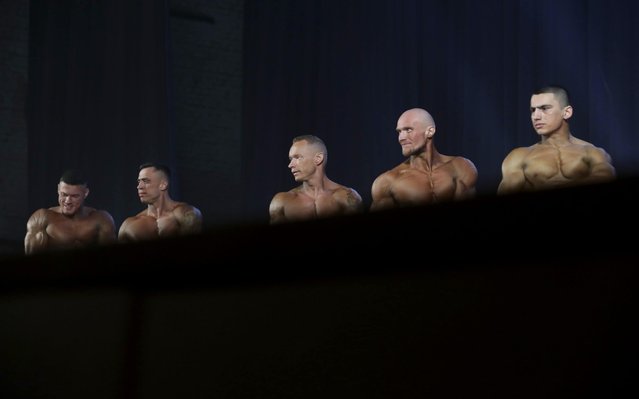 Participants in a local bodybuilding and fitness contest at Novosibirsk's Chkalov Palace of Culture in Novosibirsk, Russia on March 14, 2020. (Photo by Kirill Kukhmar/TASS) 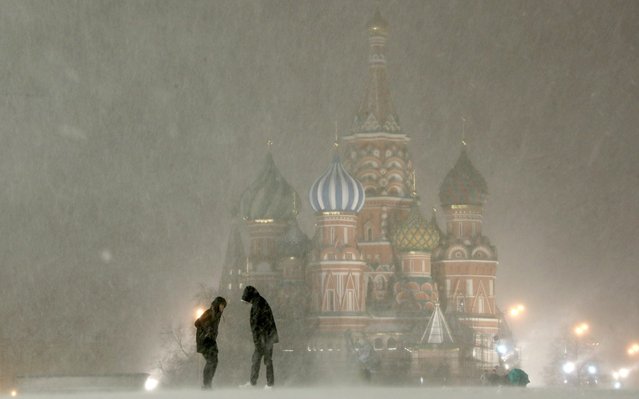 People seen in Red Square during a snowfall in Moscow, Russia on March 14, 2020. According to weather forecasts, the temperature in Moscow is to drop to –6°C; blizzard and gusting wind are also expected. (Photo by Valery Sharifulin/TASS)
Edit Del
02 Apr 2020 00:01:00, post received 0 comments
Publication archive:
←   →
Popular tags:
All tags
Last searches: