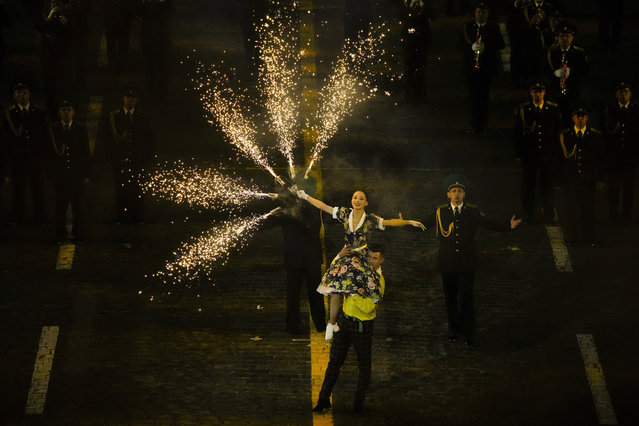 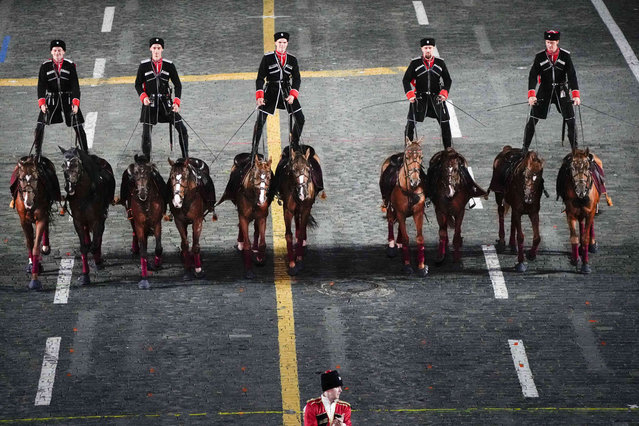 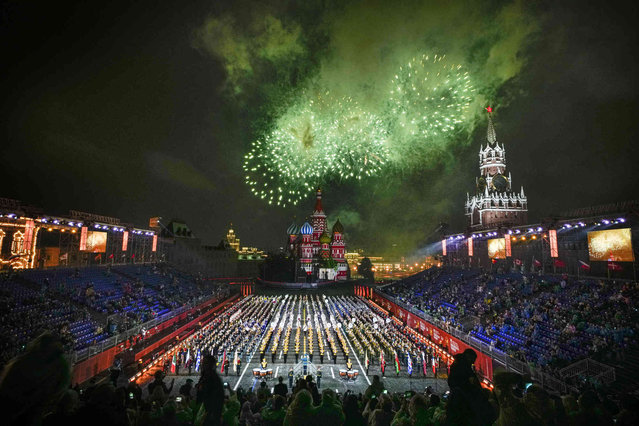 Fireworks explode as a combined military band of the participating countries performs during the Spasskaya Tower International Military Music Festival in Red Square with the St. Basil Cathedral in the background in Moscow, Russia, Thursday, August 26, 2021. (Photo by Alexander Zemlianichenko/AP Photo) 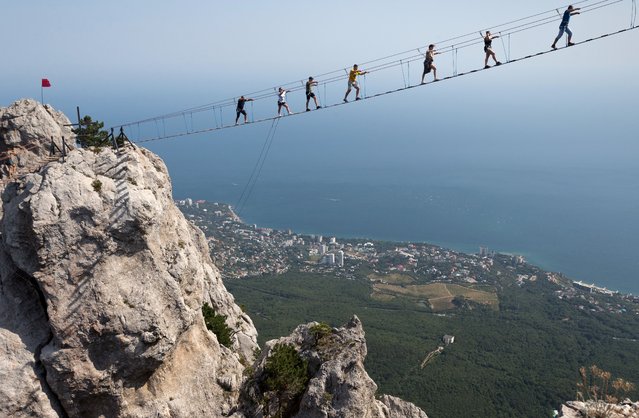 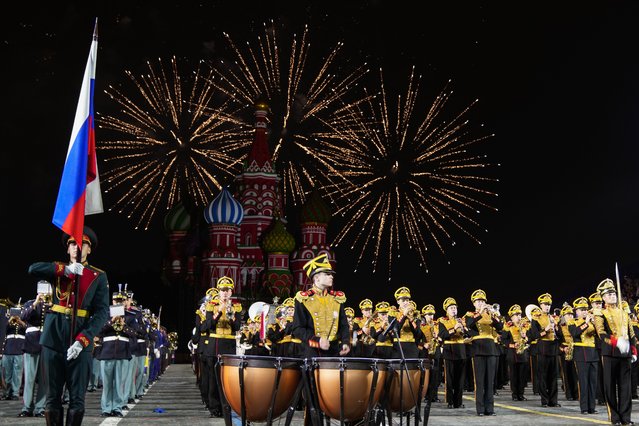 Fireworks explode as a combined military band of the participating countries performs during the Spasskaya Tower International Military Music Festival in Red Square, with the St. Basil Cathedral in the background, in Moscow, Russia, Tuesday, August 31, 2021. (Photo by Pavel Golovkin/AP Photo) 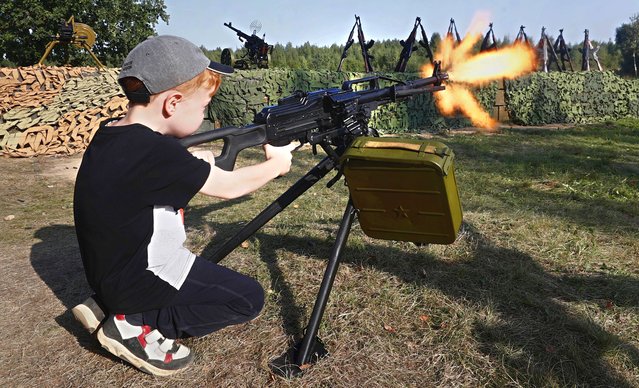 A boy uses a weapon loaded with blank cartridges as he attends the International Military-Technical Forum “Army-2021” held at Patriot Park in Kubinka, outside Moscow, Russia, 28 August 2021. The 7th International Military-Technical Forum “Army-2021” is held from 23 to 29 August 2021 at Patriot Expo, Kubinka Air Base and Alabino military training grounds. (Photo by Maxim Shipenkov/EPA/EFE) 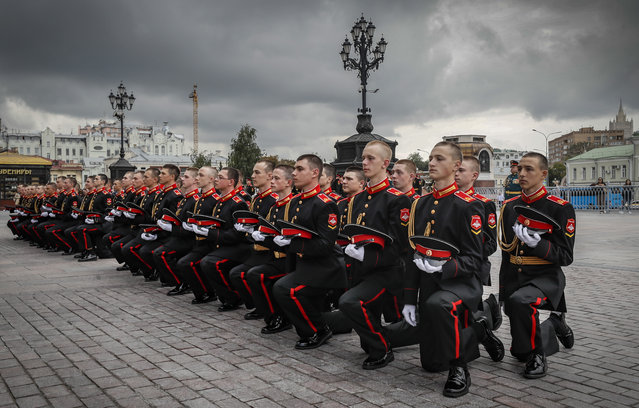 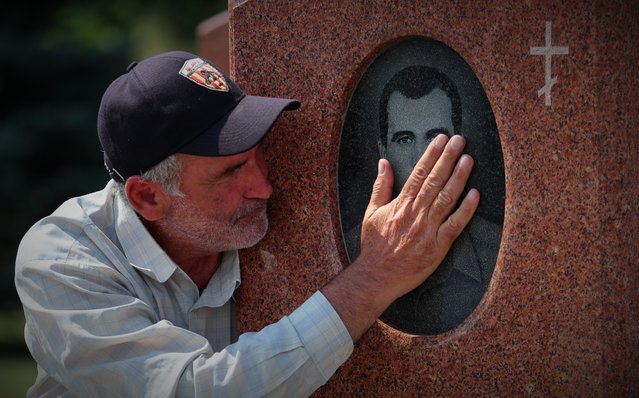 A man commemorates the victims of the 2004 Beslan school siege at the City of Angels memorial cemetery in Beslan, Russia in September 1, 2021. A group of Chechen militants took hostage over 1,200 people and killed 334, among them 186 children, in 2004. (Photo by Erik Romanenko/TASS) 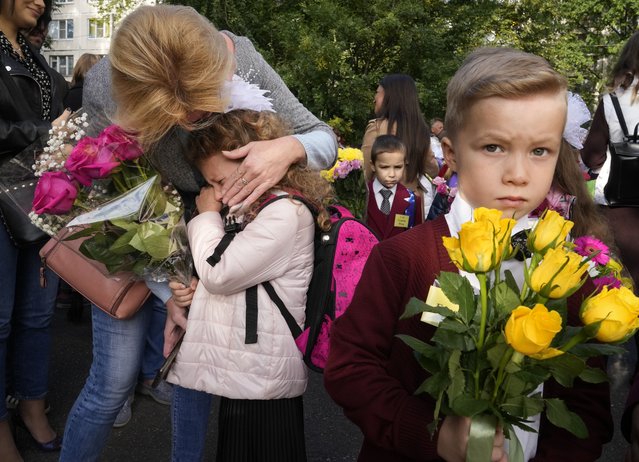 A girl in the first grade cries during a ceremony marking the start of classes at a school as part of the traditional opening of the school year known as “Day of Knowledge” amid the ongoing COVID-19 pandemic in St. Petersburg, Russia, Wednesday, September 1, 2021. (AP Photo/Dmitri Lovetsky) 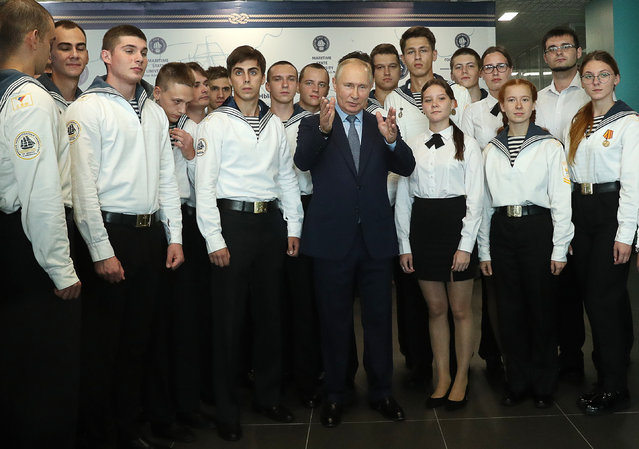 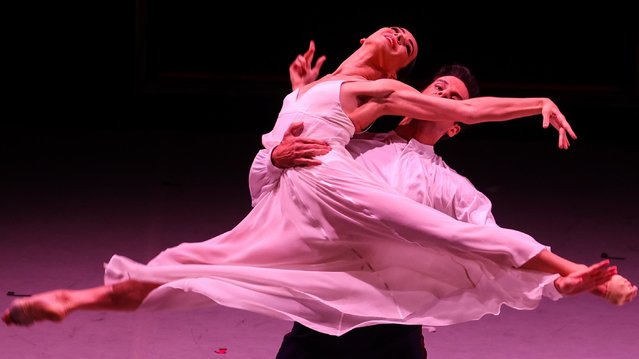 Ballet dancers Diana Vishneva and Marcelo Gomes perform in a scene from the Perm Academic Opera and Ballet Theatre's one-act production of Sergei Prokofiev's ballet “Scheherazade” staged at Mossovet Theatre as part of the 2021 Context in Moscow, Russia on September 2, 2021. (Photo by Vladimir Gerdo/Diana Vishneva Festival/TASS) 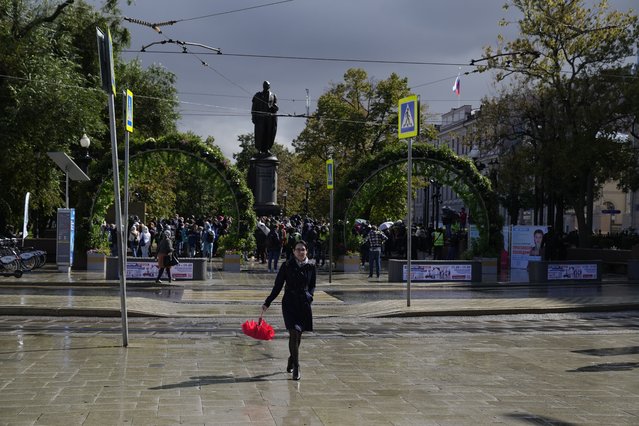 A woman walks in a street as people in the background gather to meet Sergei Mitrokhin, Russian State Duma candidate of the “Yabloko” (Apple) Political Party, in Moscow, Russia, Saturday, September 4, 2021. Mitrokhin talked to his voters about his objection to the law on “foreign agents” ahead of parliamentary election on Sept. 19. (Photo by Pavel Golovkin/AP Photo) 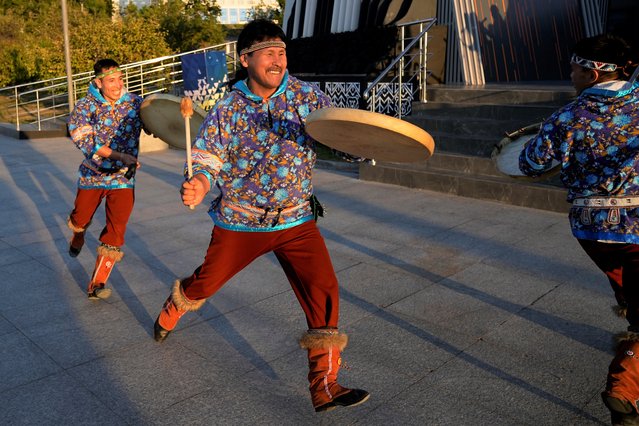 Koryak folk dancers perform during the Eastern Economic Forum at sunset on an embankment of the Russian Island in Vladivostok, Russia, Thursday, September 2, 2021. The annual forum is intended to showcase Russian achievements and attract investors. (Photo by Alexander Zemlianichenko/AP Photo) 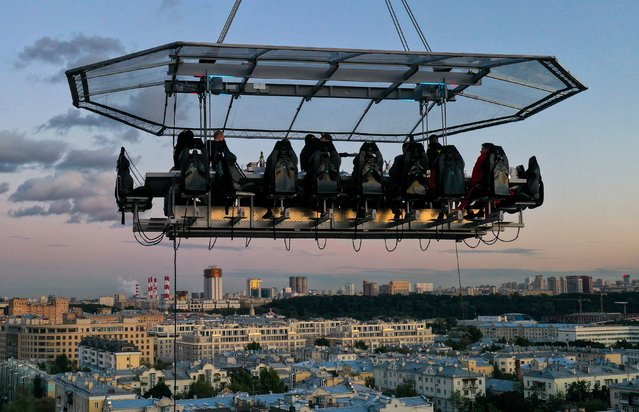 Diners sit around a Sky Table suspended 50 metres in the air by crane in Khamovniki, as part of the Dining In The Sky experience in Moscow, Russia on September 2, 2021. Dinner In The Sky was launched by David Ghysels in Brussels in 2006 and has since toured around the world. The Sky Table has 22 seats for guests, while the staff (a chef, a waiter and a security staff member) are placed in the centre of the platform. (Photo by Alexander Ryumin/TASS) 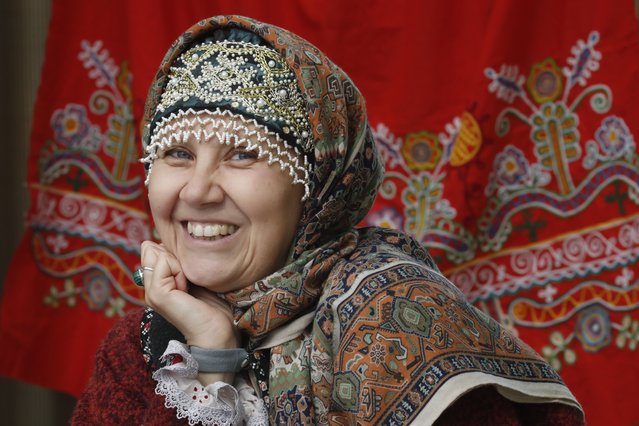 Souvenirs seller smiles during the street market of the “2021 Agrorus” international agricultural fair at the Expoforum exhibition centre in St. Petersburg, Russia, 02 September 2021. The Exhibition opens for visitors until 05 September 2021. (Photo by Anatoly Maltsev/EPA/EFE) 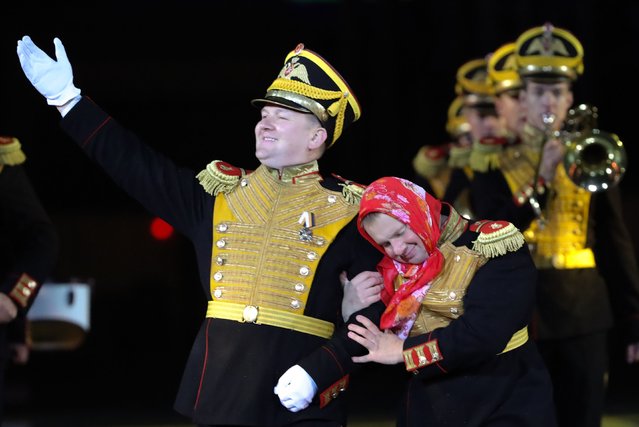 The Central Military Band of the Russian Defence Ministry performs at the closing of the 2021 Spasskaya Tower International Military Music Festival in Moscow's Red Square on September 5, 2021. (Photo by Sergei Karpukhin/TASS) 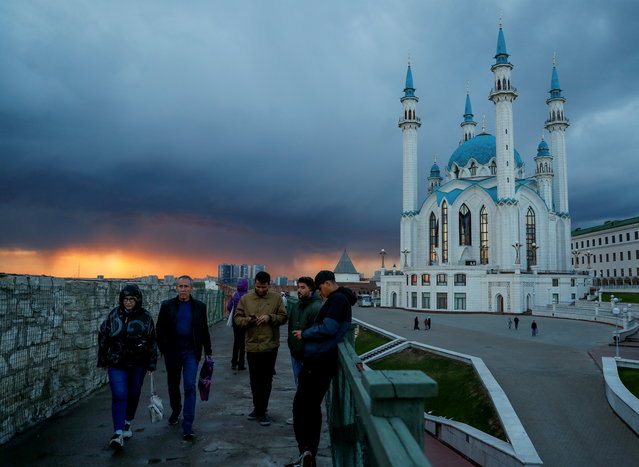 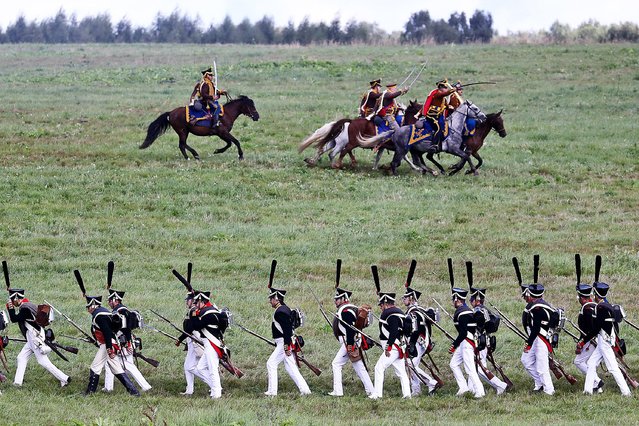 Performers wearing period uniforms take part in a reenactment of the Battle of Borodino to mark the 209th anniversary of the battle during the Day of Borodino international military historical festival in Moscow Region, Russia on September 5, 2021. (Photo by Stanislav Krasilnikov/TASS) 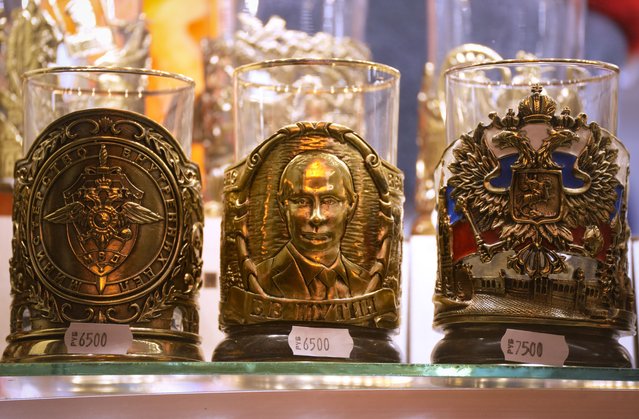 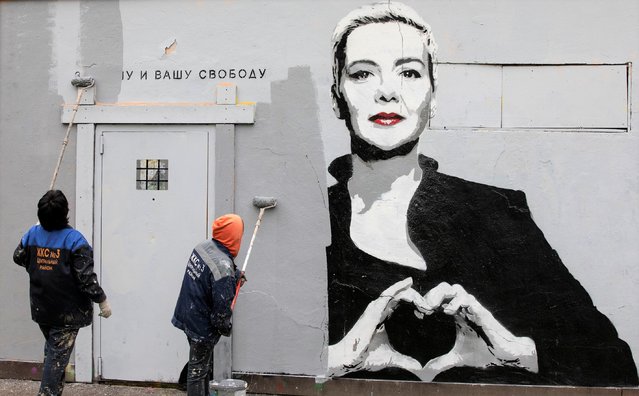 On the morning of Wednesday, September 8, a graffiti mural depicting imprisoned Belarusian opposition leader Maria Kolesnikova appeared in a St. Petersburg park. The portrait, which showed Kolesnikova making a heart shape with her hands – one of the symbols of the Belarusian opposition – was accompanied by the words “For our freedom and yours”. Utility workers painted over the mural within a matter of hours. On Monday, September 6, Kolesnikova was handed an 11-year prison sentence on charges of calling for actions that threaten the national security of Belarus, conspiring to seize power illegally, and creating an extremist group. Lawyer Maxim Znak, another prominent member of the Belarusian opposition who was tried alongside Kolesnikova, was sentenced to 10 years behind bars. (Photo by Reuters/Stringer)
Edit Del
16 Sep 2021 08:50:00, post received 0 comments
Publication archive:
←   →
Popular tags:
All tags
Last searches: