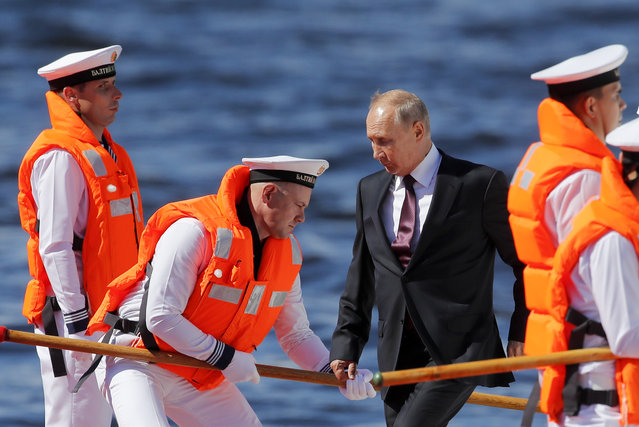 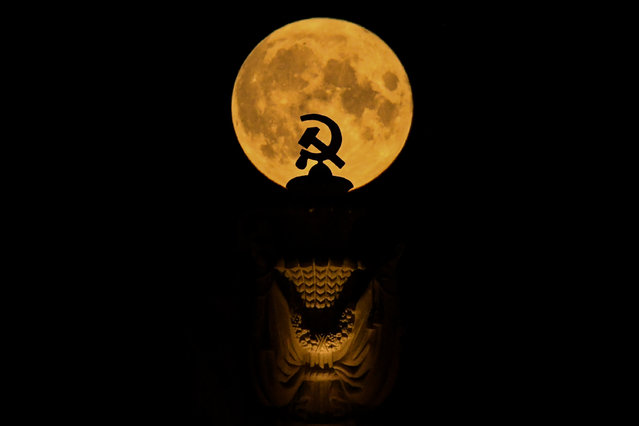 The full moon is pictured behind the Soviet symbol of hammer and sickle atop a building in Moscow late on August 3, 2020. (Photo by Kirill Kudryavtsev/AFP Photo) 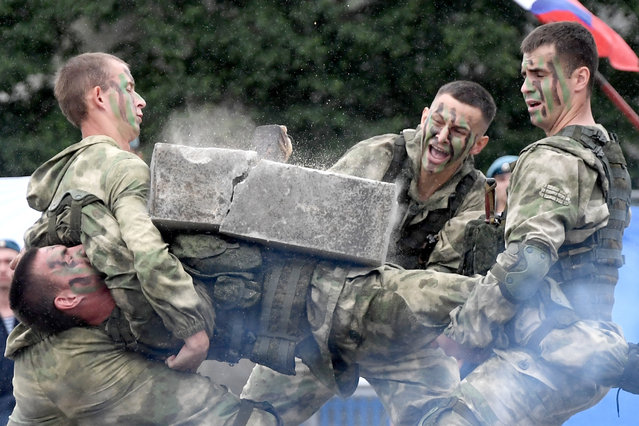 Servicemen of the 83rd separate guards air assault brigade of the Russian Airborne Troops perform during celebrations of Paratroopers' Day in the city of Ussuriysk, Primorye Territory, Russia on August 2, 2020. (Photo by Yuri Smityuk/TASS) 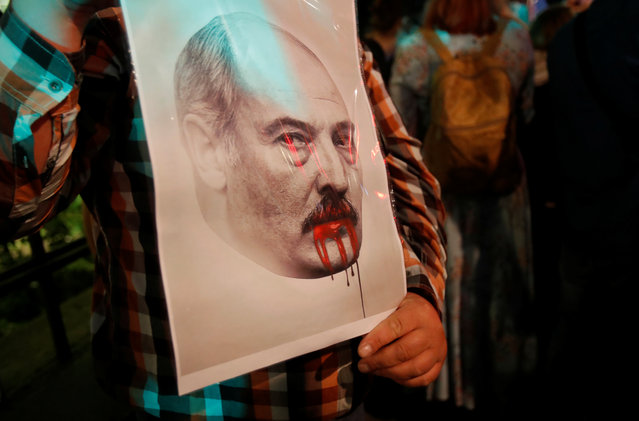 A demonstrator holds a portrait of Belarusian President Alexander Lukashenko during a protest against presidential election preliminary results outside Belarusian embassy in Moscow, Russia on August 11, 2020. (Photo by Maxim Shemetov/Reuters) 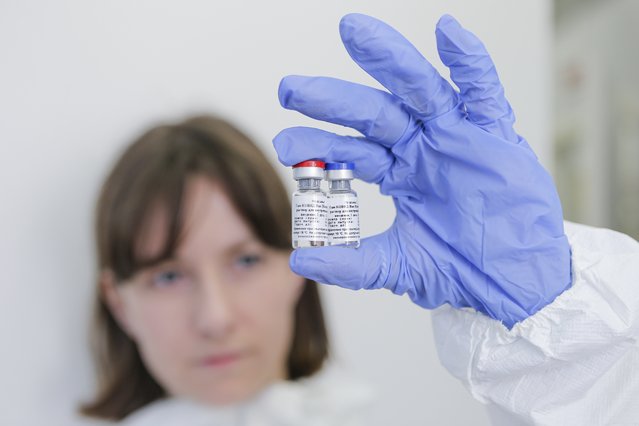 In this handout photo taken on Thursday, August 6, 2020, and provided by Russian Direct Investment Fund, an employee shows a new vaccine at the Nikolai Gamaleya National Center of Epidemiology and Microbiology in Moscow, Russia. Russia on Tuesday, Aug. 11 became the first country to approve a coronavirus vaccine for use in tens of thousands of its citizens despite international skepticism about injections that have not completed clinical trials and were studied in only dozens of people for less than two months. (Photo by Alexander Zemlianichenko Jr/ Russian Direct Investment Fund via AP Photo) 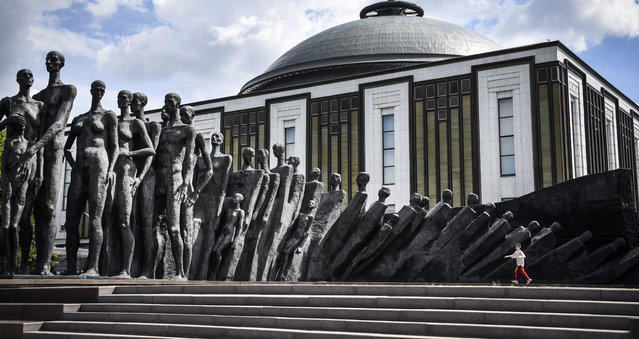 A boy runs past a WWII memorial sculpture entitled “The Tragedy of the Peoples” by Zurab Tsereteli at Poklonnaya Hill in western Moscow on August 3, 2020. (Photo by Alexander Nemenov/AFP Photo) 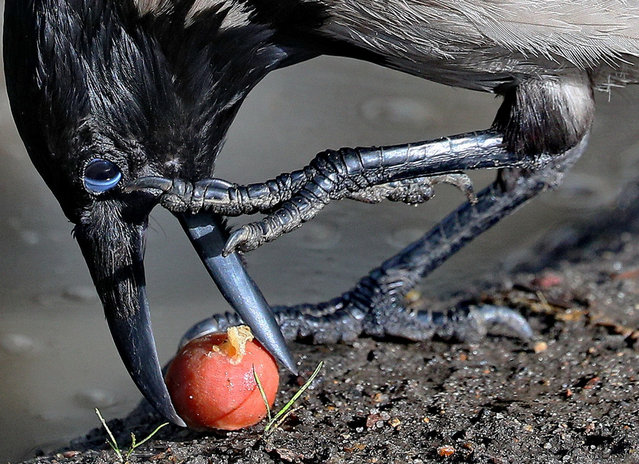 A crow eats a crab apple in Ivanovo, Russia on July 31, 2020. (Photo by Vladimir Smirnov/TASS) 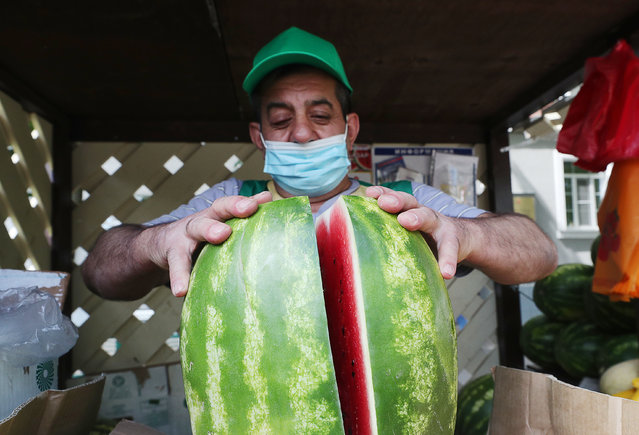 A seller cuts a watermelon in half in Moscow, Russia on August 3, 2020. On 3 August, 240 outdoor stalls selling watermelons and melons have opened in Moscow. (Photo by Mikhail Tereshchenko/TASS) 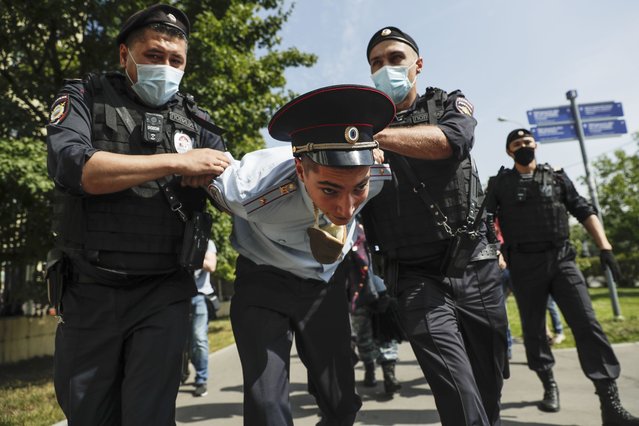 Police officers detains a protester, center, dressed as a Russian police officer before a court hearing of the New Greatness group who are charged with the organization of an extremist association in Moscow, Russia, Thursday, August 6, 2020. Arrests of the two youngest members of the New Greatness group – 17-year-old Anna Pavlikova and 19-year-old Maria Dubovik – prompted a mass protest in August 2018, after which the two teenagers were released under house arrest. (Photo by Pavel Golovkin/AP Photo) 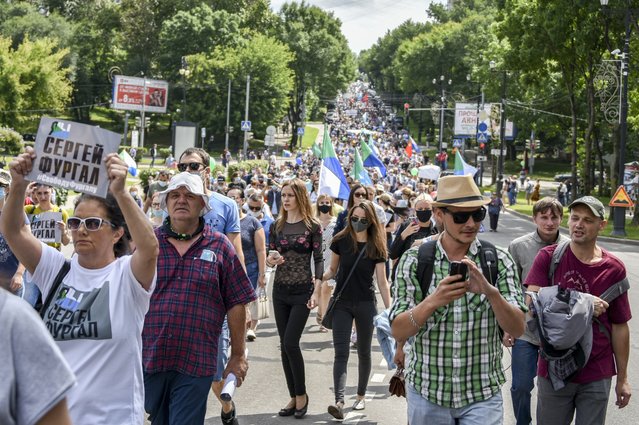 People hold posters that read: “I am, We are Sergei Furgal, Sergei Furgal our Governor”, during an unsanctioned protest in support of Sergei Furgal, the governor of the Khabarovsk region, in Khabarovsk, 6100 kilometers (3800 miles) east of Moscow, Russia, Saturday, August 8, 2020. Thousands of demonstrators have again gathered in the major Russian Far East city of Khabarovsk to denounce the arrest of the region's governor a month ago. Sergei Furgal was arrested on suspicion of involvement in murders and taken to jail in Moscow. The estimated 3,000 demonstrators in Khabarovsk protested the charges and want him returned to the city for trial. (Photo by Igor Volkov/AP Photo) 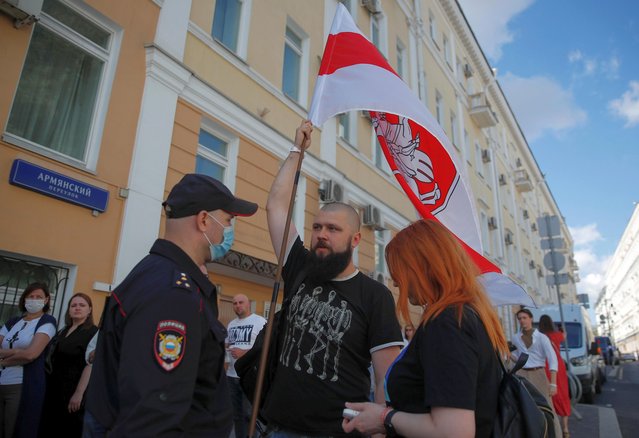 People queue outside the Belarusian embassy to cast their votes during the presidential election in Moscow, Russia on August 9, 2020. (Photo by Maxim Shemetov/Reuters) 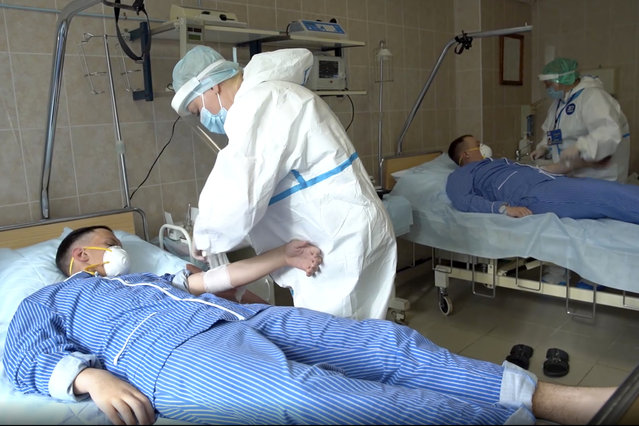 In this photo made from footage provided by the Russian Defense Ministry on Wednesday, July 15, 2020, medical workers in protective gear prepare to draw blood from volunteers participating in a trial of a coronavirus vaccine at the Budenko Main Military Hospital outside Moscow, Russia. Russia is boasting that it’s about to be the first country to approve a COVID-19 vaccine, but scientists worldwide are sounding the alarm that the headlong rush could backfire. (Photo by Russian Defense Ministry Press Service via AP Photo) 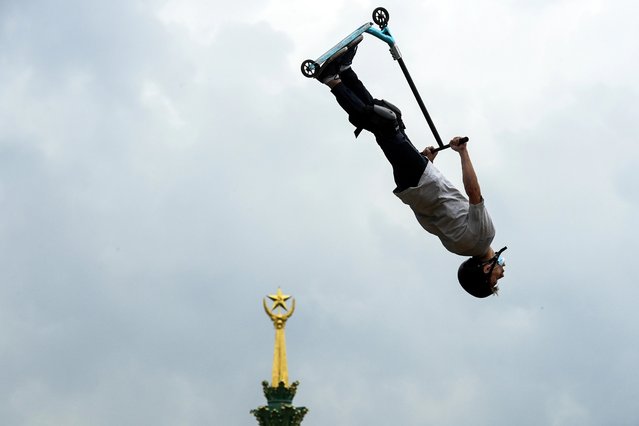 A participant performs a jump with his scooter in front a building with the Soviet Union symbol during a local extreme scooter tournament at the All-Russia Exhibition Centre (VDNKh), a trade show and amusement park in Moscow on August 1, 2020. (Photo by Kirill Kudryavtsev/AFP Photo) 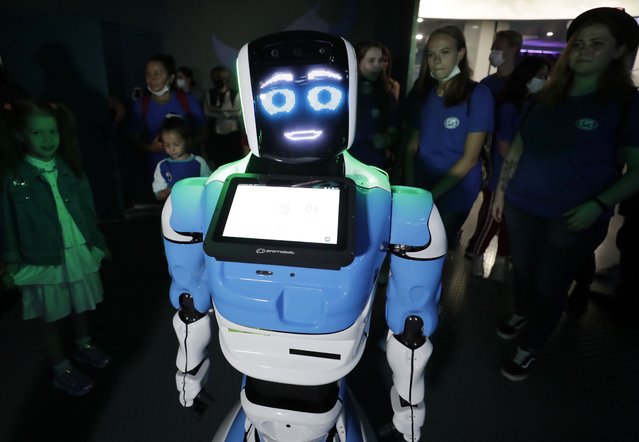 A robot guide and visitors at the Moskvarium center of oceanography and marine biology at Moscow's VDNKh exhibition center in Moscow, Russia on August 5, 2020. Moskvarium is holding festive events marking its 5th birthday on August 5-9. (Photo by Mikhail Metzel/TASS) 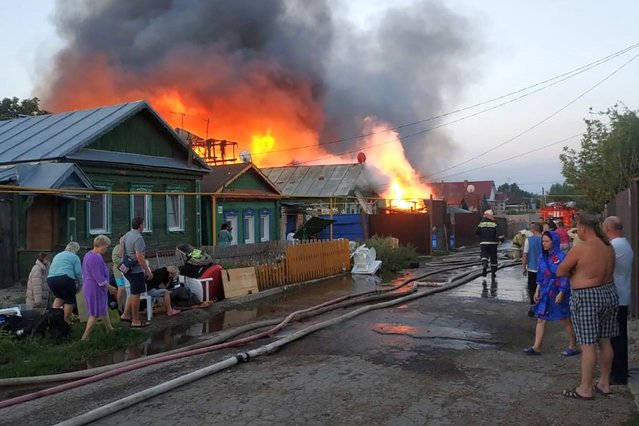 The site of a massive fire in Zheleznodorozhny District of Samara, Russia on August 8, 2020. The fire hit 10 residential houses. (Photo by Russian Emergencies Ministry/TASS via Getty Images) 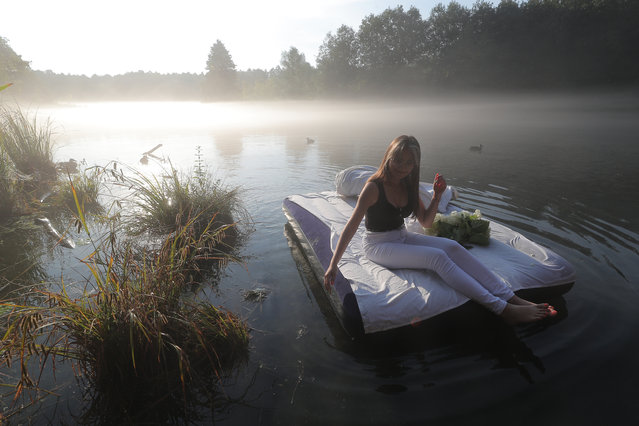 A girl poses for a photo on the Big Blue Lake in Kazan, Russia on August 6, 2020. The Blue Lakes development project was shortlisted in a Russian ecotourism development contest; the Zerkala Tatarstana (Mirrors of Tatarstan) tourism and recreation cluster may be founded at the Kadyshevo forest. (Photo by Yegor Aleyev/TASS) 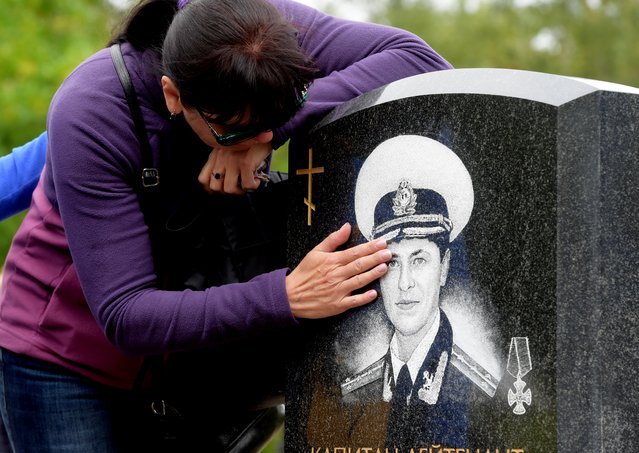 Relatives visit the graves of those who died in the Kursk submarine disaster at Saint Petersburg's Serafimovskoe cemetery during a memorial ceremony on the 20th anniversary of the tragedy on August 12, 2020. On August 12, 2000, the accidental explosion of a torpedo caused the sinking of the nuclear submarine Kursk, flagship of the Russian Navy. (Photo by Olga Maltseva/AFP Photo) 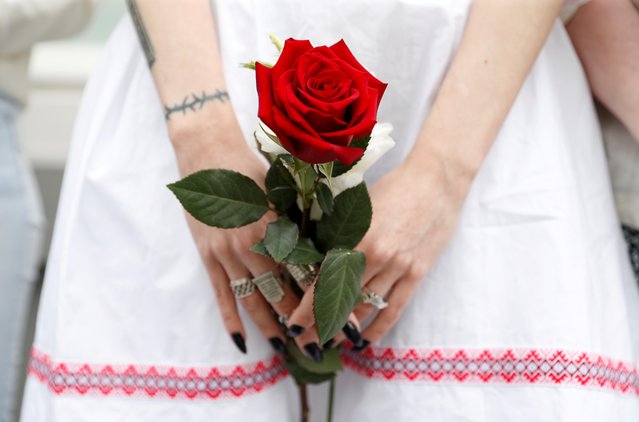 A woman holds a rose during a rally in solidarity with Belarusian people following recent protests to reject the presidential election results, in front of the Belarusian embassy in Moscow, Russia on August 15, 2020. (Photo by Evgenia Novozhenina/Reuters) 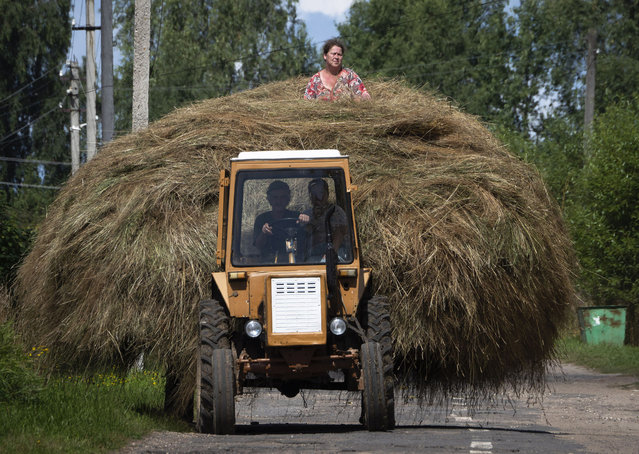 A woman sits on top of a pile of hay transported by a tractor in the village of Sera, 200 km (124 miles) north-east of Moscow, Russia, Sunday, August 9, 2020. (Photo by Dmitri Lovetsky/AP Photo) 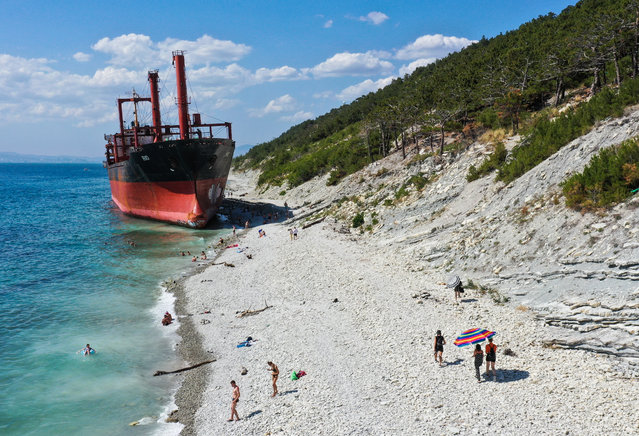 The Rio dry cargo ship that has ran aground during a storm in December 2018 in Kabardinka, Krasnodar Territory, Russia on August 11, 2020. The vessel has become a tourist attraction of the region. (Photo by Alexander Ryumin/TASS)
Edit Del
21 Aug 2020 00:05:00, post received 0 comments
Publication archive:
←   →
Popular tags:
All tags
Last searches: