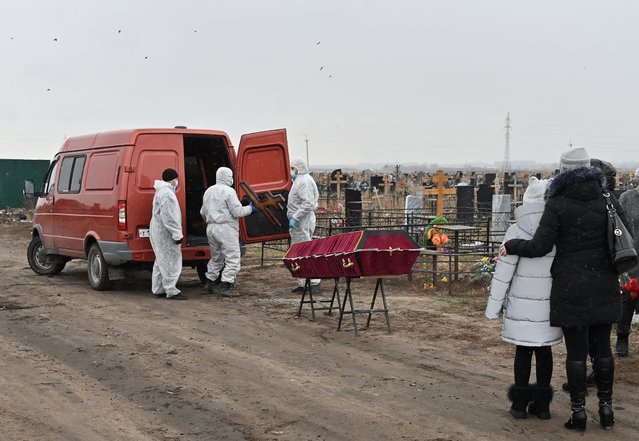 Grave diggers wearing personal protective equipment (PPE) prepare to bury a person, who presumably died of the coronavirus disease (COVID-19), at a cemetery in Omsk, Russia on November 3, 2020. (Photo by Alexey Malgavko/Reuters) 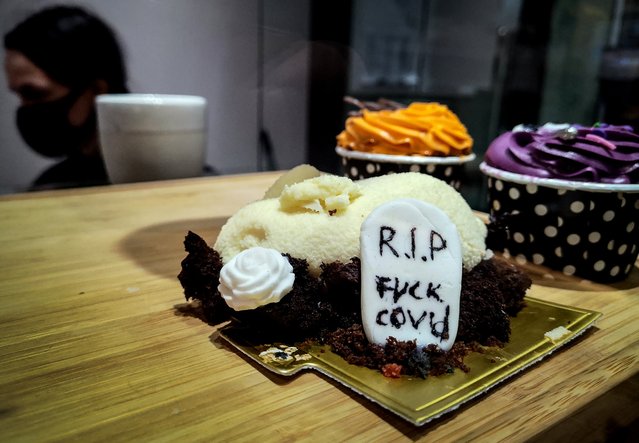 A waitress wearing a face mask serves cakes and sweets in a street cafe in downtown Moscow on November 1, 2020, amid the ongoing coronavirus disease pandemic. Russia has the fourth-highest virus caseload in the world, with a total of 1,636,781 registered infections and 28,235 deaths. (Photo by Alexander Nemenov/AFP Photo) 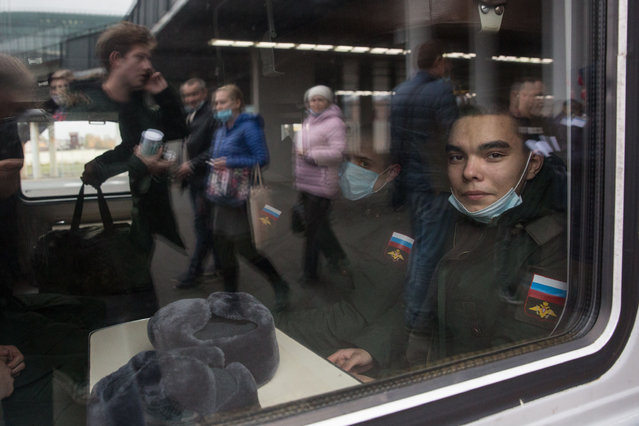 New army conscripts take a train to the military site in St. Petersburg, Russia, October 27, 2020. Russia's ongoing autumn army recruitment started on Oct. 1 and will last until Dec. 31. In order to be conscripted, candidates must be Russian citizens aged between 18 and 27, and pass a physical examination. (Photo by Xinhua News Agency/Rex Features/Shutterstock) 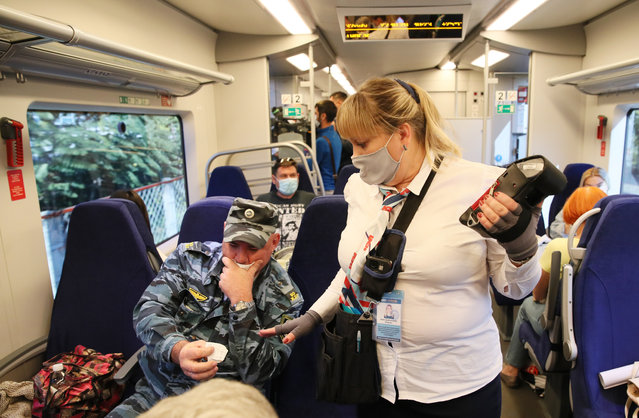 A train attendant checks a passenger's ticket on a Lastochka train during the enforcement of the face mask requirement in compliance with public health security measures amid the COVID-19 pandemic in Sochi, Russia on October 27, 2020. (Photo by Dmitry Feoktistov/TASS) 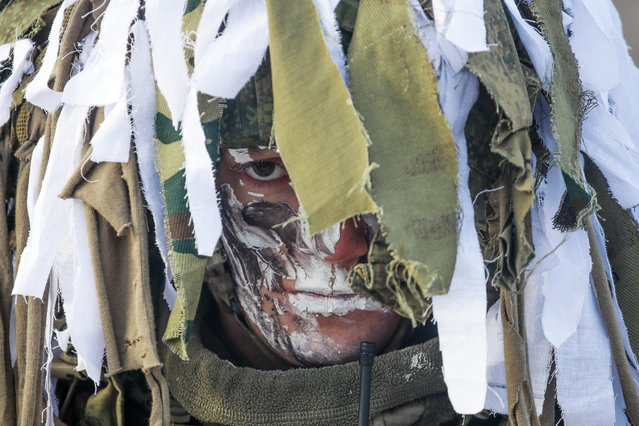 A cadet of the Novosibirsk Higher Military Command School during tactical and special training at the Koltsovo range in Novosibirsk Region, Russia on October 29, 2020. (Photo by Kirill Kukhmar/TASS) 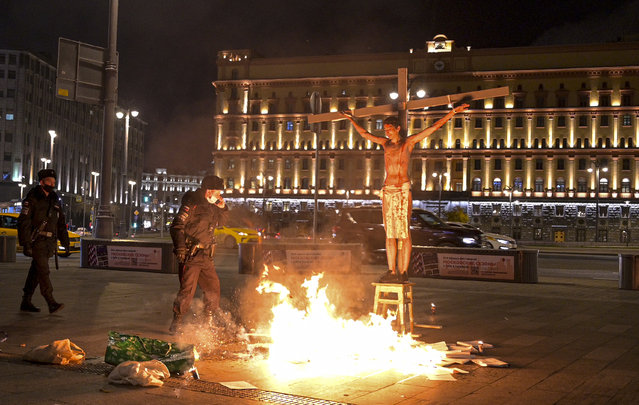 A police officer speaks on the phone as Russian activist Pavel Krisevich poses on a cross with the headquarters of the Federal Security Service (FSB) seen in the background in Moscow, Russia, Thursday, November 5, 2020. Krisevich's associates doused the pavement with a liquid harmlessly burning at a low temperature during the action, intended to draw public attention to what they describe as the FSB's alleged involvement in efforts to stifle dissent. (Photo by George Markov/AP Photo) 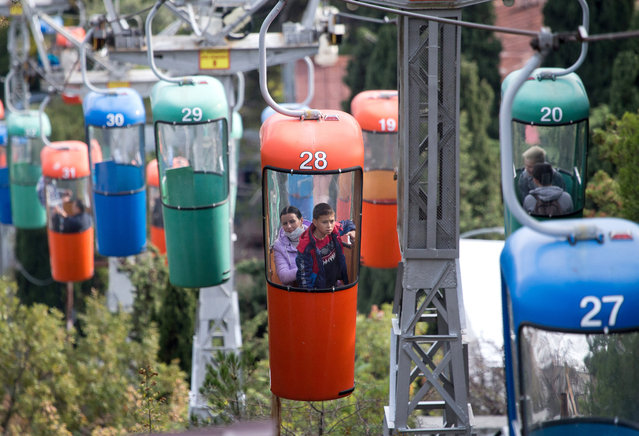 The Yalta-Gorka cableway in Yalta, Crimea, Russia on November 4, 2020. (Photo by Sergei Malgavko/TASS) 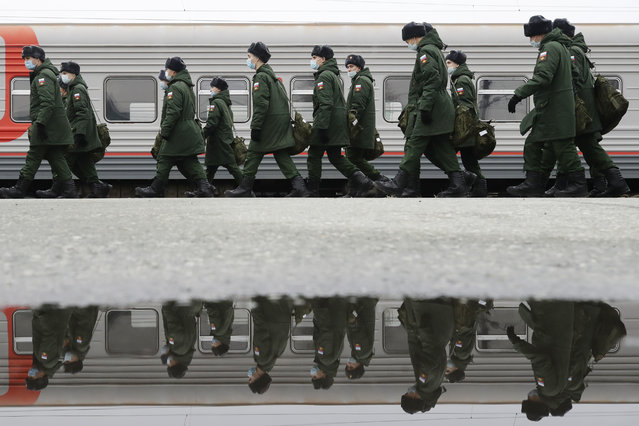 Conscripts are seen during a ceremony at the Novosibirsk-Glavny railway station marking their departure for military service with the Russian Army, during the COVID-19 pandemic in Novosibirsk, Russia on November 6, 2020. (Photo by Kirill Kukhmar/TASS) 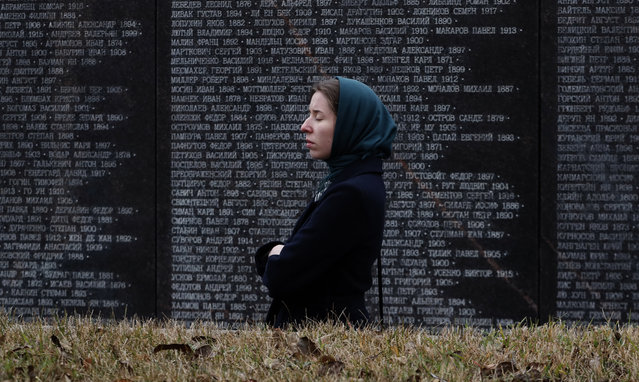 A woman visits the memorial walls at Butovo shooting range outside Moscow, Russia, 30 October 2020. The Memory Garden memorial was unveiled and blessed on 27 September 2017, in memory of 20,762 people executed here during Stalin political terror in 1937-1938. The victims were executed on allegations ranging from their Chiristian faith, non-proletarian social origin, or political views. Apple garden was planted in the 70s by Soviet KGB servicemen on the site of the mass executions. (Photo by Maxim Shipenkov/EPA/EFE) 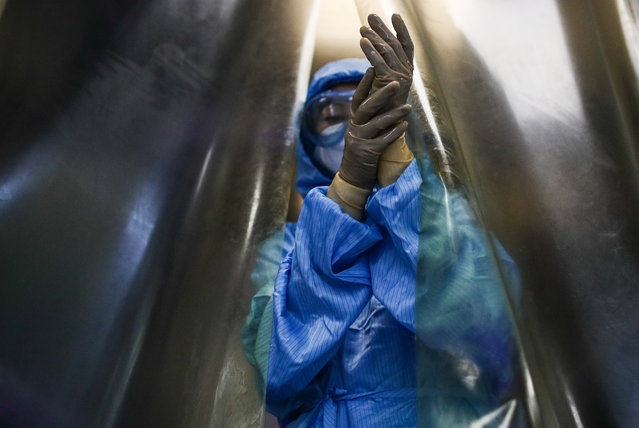 A medical staff member takes off a protective suit after a shift in the “red zone” at Moscow's City Hospital No 15 (Filatov Hospital) treating COVID-19 patients in Moscow, Russia on October 28, 2020. (Photo by Sergei Bobylev/TASS) 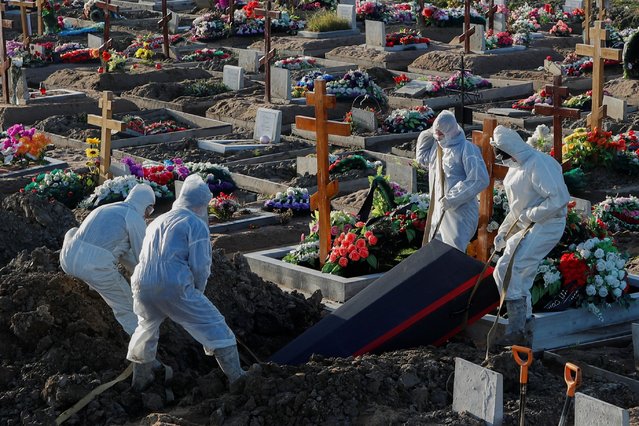 Grave diggers wearing personal protective equipment (PPE) lower a coffin while burying a person in the special purpose section of a graveyard for the coronavirus disease (COVID-19) victims on the outskirts of Saint Petersburg, Russia on November 6, 2020. (Photo by Anton Vaganov/Reuters) 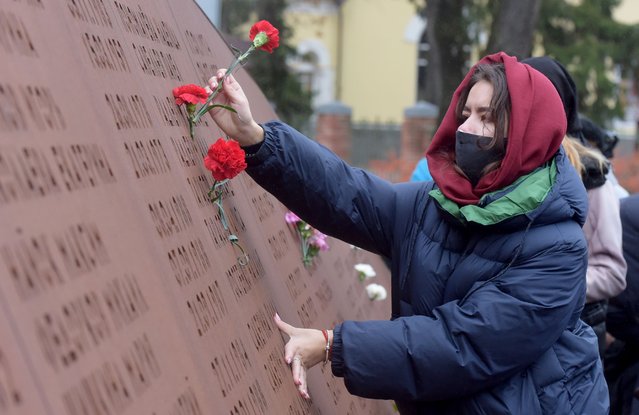 People visit a memorial commemorating the 224 people killed in the bombing of a Russian airliner over Egypt, on the fifth anniversary of the disaster in the town of Vsevolozhsk outside Saint Petersburg on October 31, 2020. (Photo by Olga Maltseva/AFP Photo) 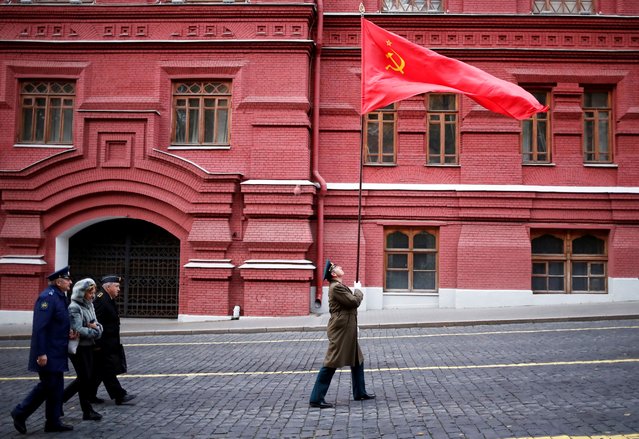 Supporters of the Russian Communist Party take part in a procession marking the anniversary of the 1917 Bolshevik Revolution, also known as the Great October Socialist Revolution, in Red Square in Moscow, Russia on November 7, 2020. (Photo by Maxim Shemetov/Reuters) 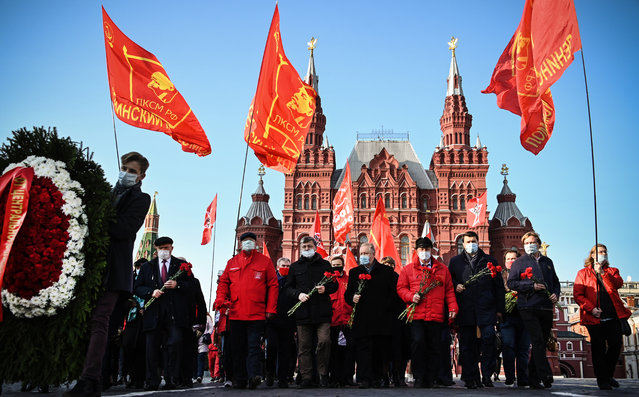 Russian Communist supporters march towards the Mausoleum of Vladimir Lenin to lay flowers on the 102nd anniversary of the Komsomol on Red Square in Moscow on October 28, 2020. Komsomol, The All-Union Leninist Young Communist League, was a political youth organisation in the Soviet Union, the youth division of the Soviet Communist Party, established in 1918 and died shortly after the collapse of the Soviet Empire in 1991. (Photo by Alexander Nemenov/AFP Photo) 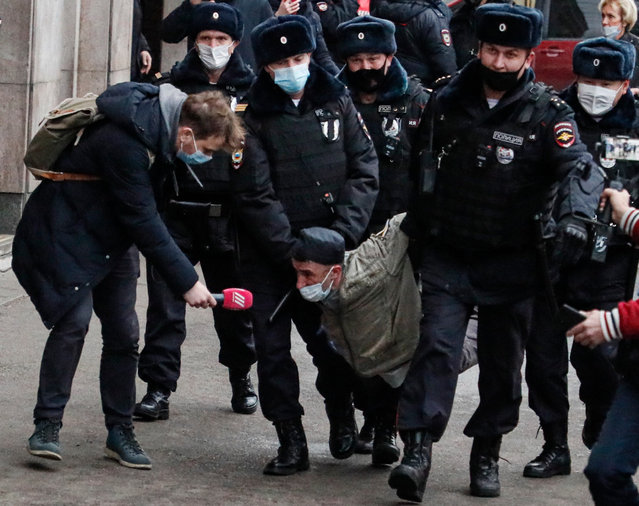 Russian policemen detain participants of an unauthorized “Russian March 2020: For freedom and justice! We go out to say that Russian lives matter” organised by Russian nationalists on the National Unity Day in Moscow, Russia, 04 November 2020. Russian nationalists demand freedom for political prisoners in prisons and a fair investigation into the deaths of political prisoners, including representatives of radical movements who were killed during detention or found dead in places of detention. (Photo by Sergei Ilnitsky/EPA/EFE) 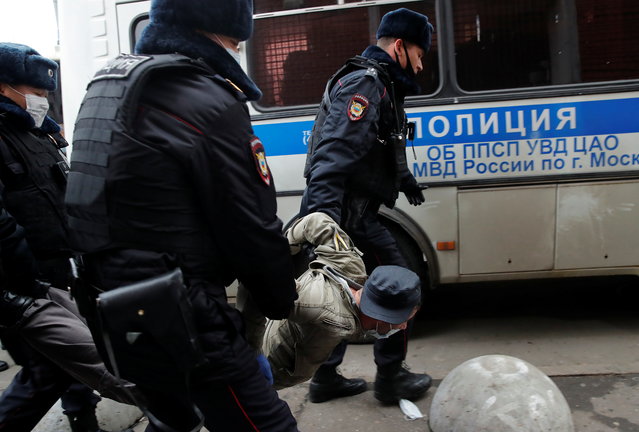 A demonstrator is taken away by police officers during a rally organised by nationalists and activists of far-right political groups, on the National Unity Day in Moscow, Russia on November 4, 2020. (Photo by Maxim Shemetov/Reuters) 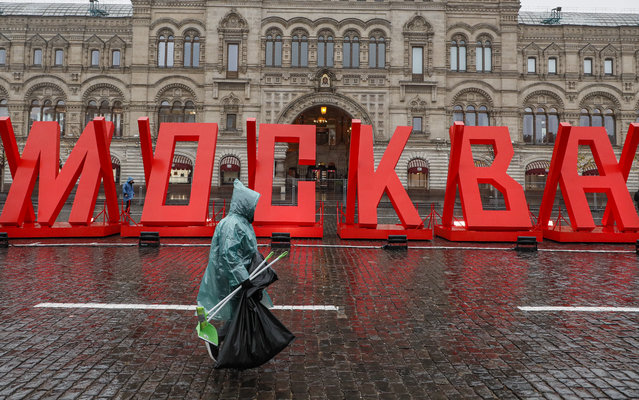 A municipal worker walks past a sign reading “Moscow” at the exhibition dedicated to the 79th anniversary of the 1941 Red Square Parade and the battle for Moscow during WWII,in Moscow, Russia, 08 November 2020. The exhibition features WWII military hardware and installations of the scene of daily life of Moscow during the war. (Photo by Sergei Ilnitsky/EPA/EFE) 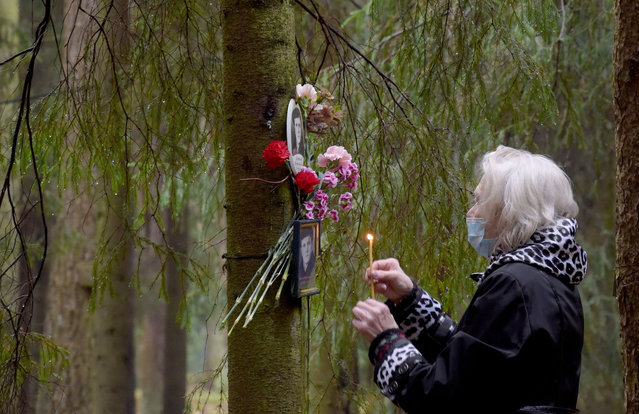 A woman visits the memorial, where the victims of Soviet dictator Joseph Stalin's regime were buried in the woods on the outskirts of Saint Petersburg, on October 30, 2020. Russia observed today Day of Victims of Political Repressions as people honoured the memory of the thousands of victims perished in the repressions of the Soviet Communist regime. (Photo by Olga Maltseva/AFP Photo) 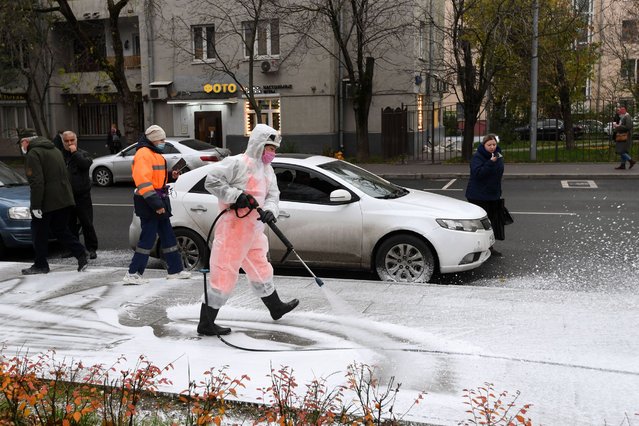 A municipal worker wearing protective equipment sprays disinfectant on a sidewalk in Moscow on November 3, 2020, amid the ongoing coronavirus disease pandemic. (Photo by Natalia Kolesnikova/AFP Photo) 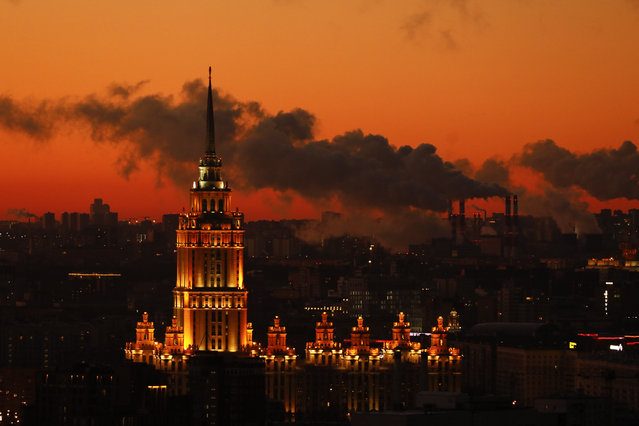