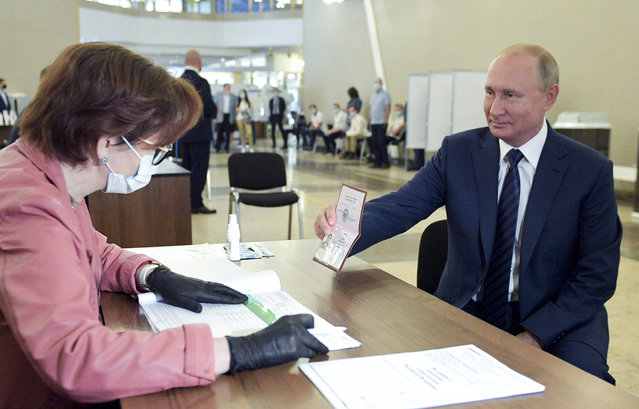 People watch as firefighters work to extinguish a fire at a building in central Moscow, Russia on July 2, 2020. (Photo by Evgenia Novozhenina/Reuters) 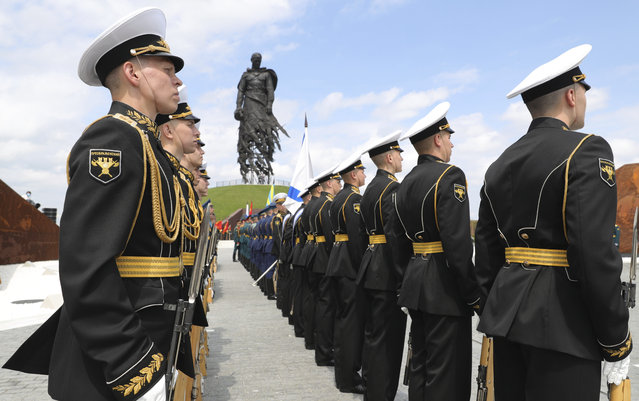 Russian sailors attend an opening ceremony of the monument to honour the World War II Red Army, in the village of Khoroshevo, just outside Rzhev, about 200 kilometers (about 125 miles) northwest of Moscow, Russia, Tuesday, June 30, 2020. Putin urged voters to cast ballots in a constitutional vote wrapping up Wednesday that could allow him to extend his rule until 2036. (Photo by Mikhail Klimentyev, Sputnik, Kremlin Pool Photo via AP Photo) 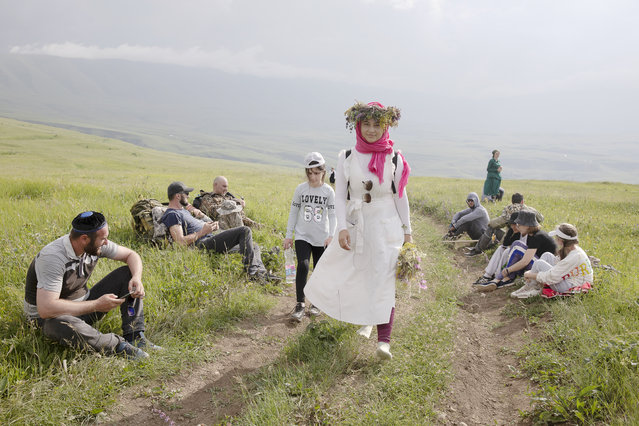 People take part in a free hike organized by the Tourism Ministry of the Chechen Republic to mark the lifting of the self-isolation regime and the start of the hiking season in Chechen Republic, Russia on July 4, 2020. The 11-kilometer route runs from Lake Kezenoi-Am to the ancient village of Kharkaroi. (Photo by Yelena Afonina/TASS) 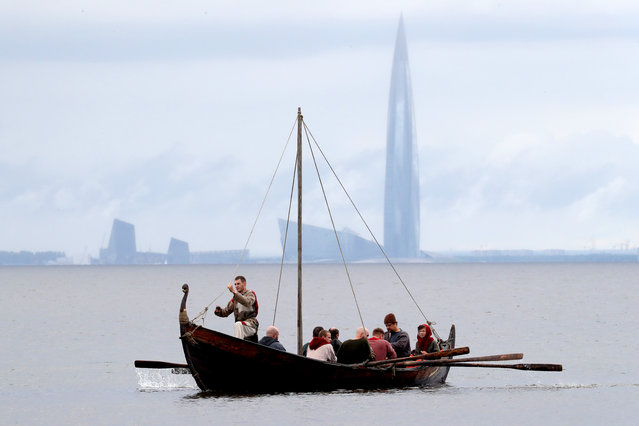 Members of the Rus marine unit of the Historical Reenactment Club sail the Volkhov (Magi) boat in the Neva Bay in St Petersburg, Russia on July 5, 2020. (Photo by Peter Kovalev/TASS) 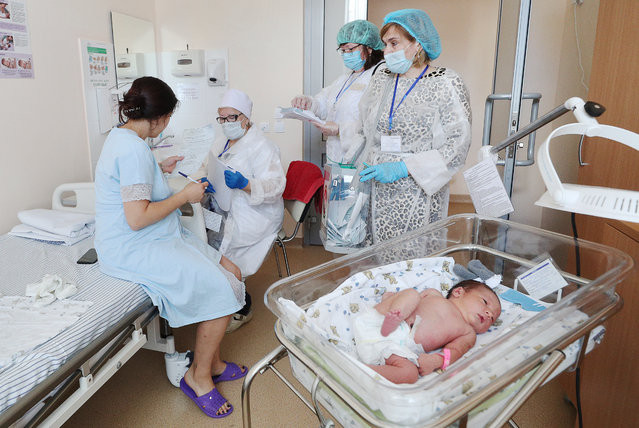 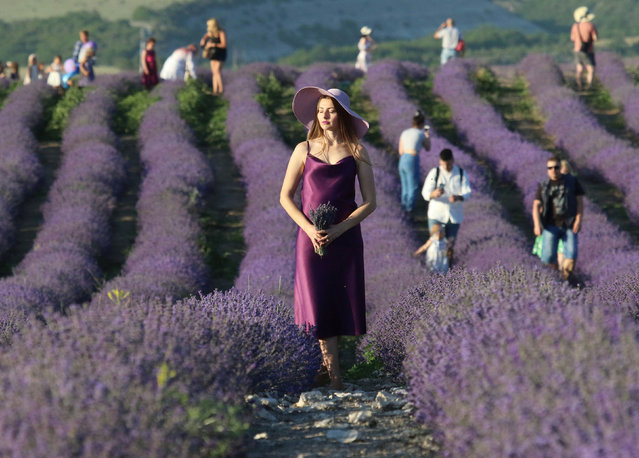 A woman poses for a picture in a lavender field outside Bakhchysarai, Crimea on June 28, 2020. (Photo by Alexey Pavlishak/Reuters) 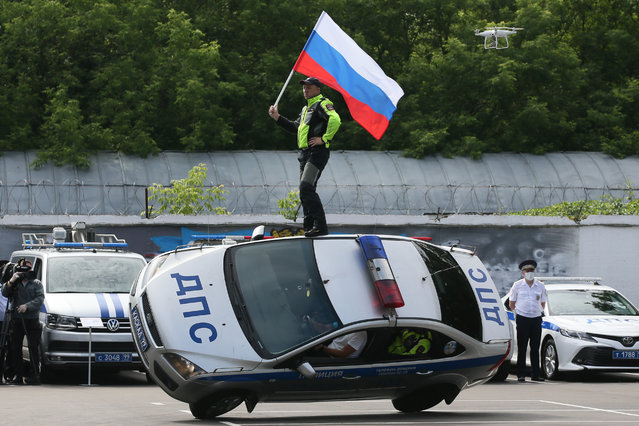 Members of the Kaskad (Cascade) stunt team perform in Moscow, Russia on July 3, 2020 on the parade ground of the 2nd Separate Special Purpose Battalion of the Road Patrol Service under the General Traffic Safety Administration (GIBDD) on Traffic Police Day annually celebrated on July 3 in Russia. (Photo by Vladimir Gerdo/TASS) 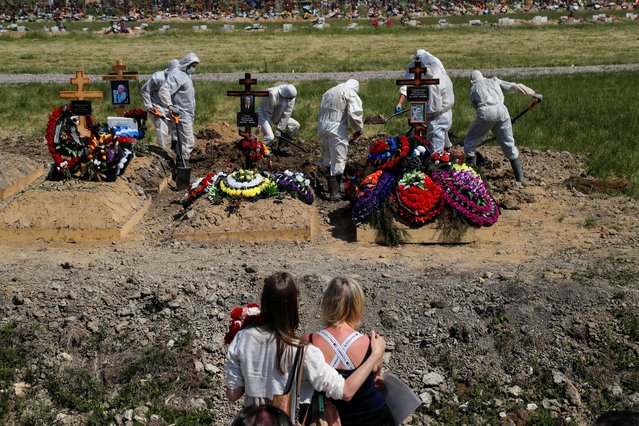 Mourners watch grave diggers burying a person, who presumably died of the coronavirus disease (COVID-19), in the special purpose section of a graveyard on the outskirts of Saint Petersburg, Russia on June 26, 2020. (Photo by Anton Vaganov/Reuters) 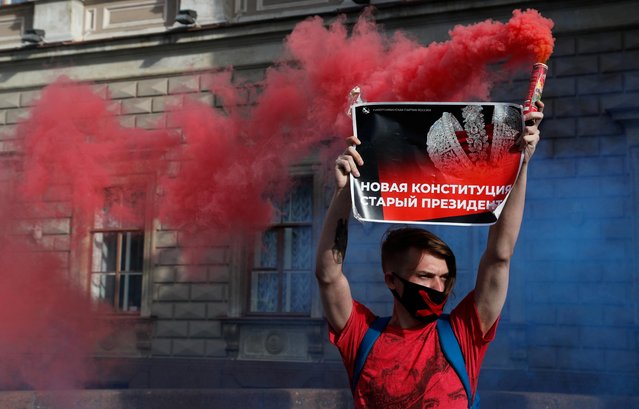 An activist takes part in a protest against amendments to Russia's Constitution following the announcement of the results of the week-long vote on constitutional reforms, in central Saint Petersburg, Russia on July 2, 2020. The placard reads: ”The new constitution, the old president”. (Photo by Anton Vaganov/Reuters) 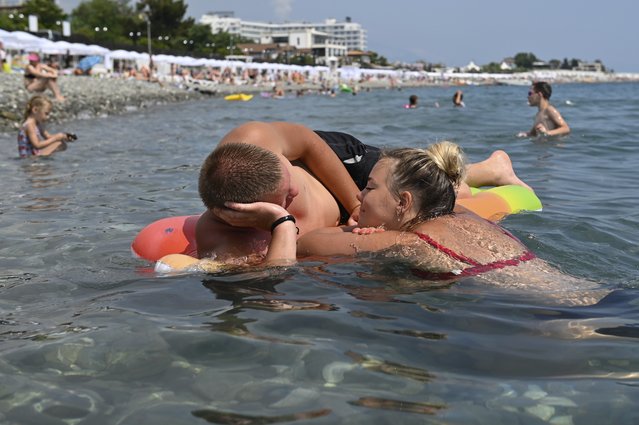 A couple enjoy the beach in the Black Sea resort of Sochi, Russia, Sunday, July 5, 2020. Tens of thousands of vacation-goers in Russia and Ukraine have descended on Black Sea beaches, paying little attention to safety measures despite levels of contagion still remaining high in both countries. (Photo by Artur Lebedev/AP Photo) 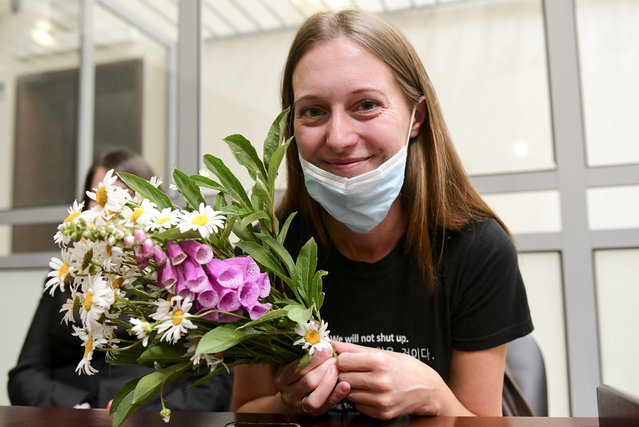 Russian journalist Svetlana Prokopyeva holds a bunch of flowers after a court session in Pskov, Russia, Monday, July 6, 2020. A court in the city of Pskov convicted Prokopyeva on charges of condoning terrorism on Monday and ordered her to pay a fine in a case that has been widely criticized as an attack on freedom of speech. (Photo by AP Photo) 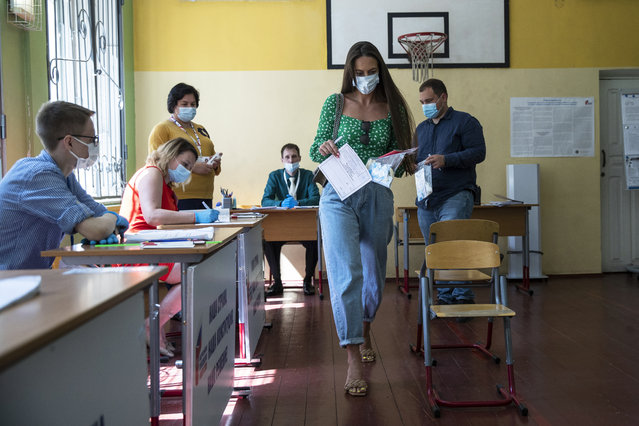 A woman wearing a face mask to protect against coronavirus prepares to cast her ballot at a polling station in Moscow, Russia, Wednesday, July 1, 2020. (Photo by Pavel Golovkin/AP Photo) 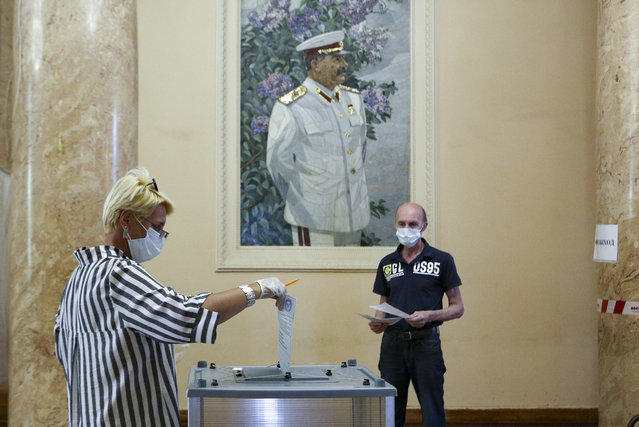 A woman, wearing a face mask and gloves to protect against coronavirus and observing social distancing guidelines, casts her ballot at a polling station with a portrait of former Soviet leader Josef Stalin on the wall in Volgograd, former Stalingrad, Russia, Wednesday, July 1, 2020. The vote on the constitutional amendments that would reset the clock on Russian President Vladimir Putin's tenure and enable him to serve two more six-year terms is set to wrap up Wednesday. (Photo by Dmitry Rogulin/AP Photo) 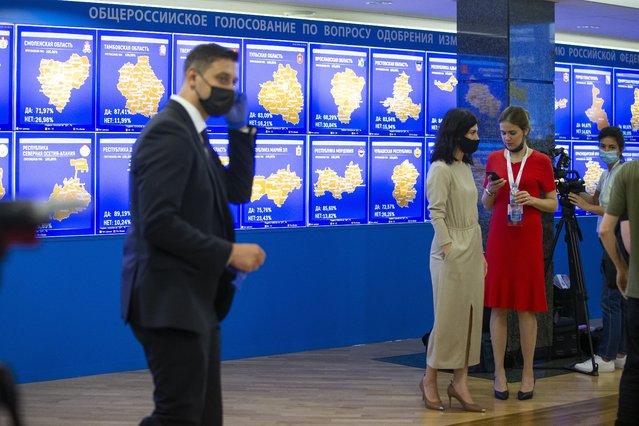 Staff members of the Russian Central Election Commission, wearing face masks and gloves to protect against coronavirus, gather prior to a news conference with Ella Pamfilova, head of Russian Central Election Commission, in front of an electronic screen showing the results of constitution vote in Moscow, Russia, Thursday, July 2, 2020. Almost 78% of voters in Russia have approved amendments to the country's constitution that will allow President Vladimir Putin to stay in power until 2036, Russian election officials said Thursday after all the votes were counted. Kremlin critics said the vote was rigged. (Photo by Alexander Zemlianichenko/AP Photo) 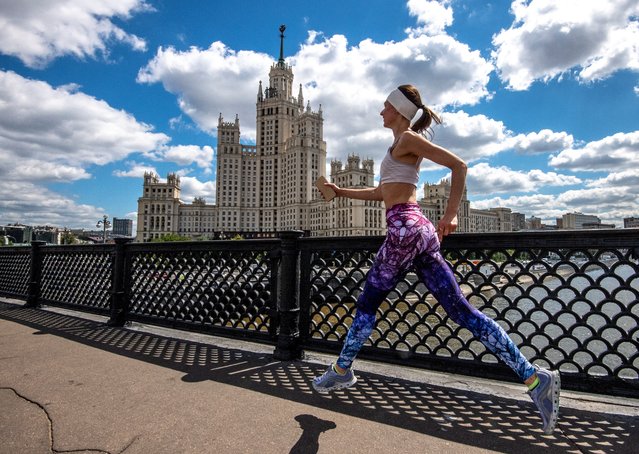 A woman runs along a bridge in front of a Stalin-era skyscraper in central Moscow on June 29, 2020. (Photo by Yuri Kadobnov/AFP Photo) 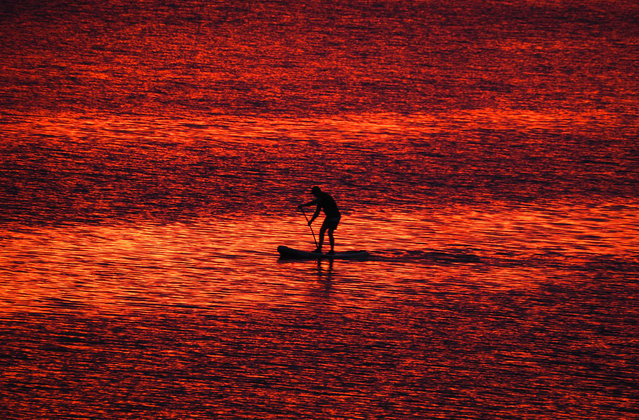 A man steers his stand-up paddle board at sunset on the Velikaya River in Pskov, 300km (187 miles) South-West from St.Petersburg, Russia, Monday, July 6, 2020. (Photo by Dmitri Lovetsky/AP Photo) 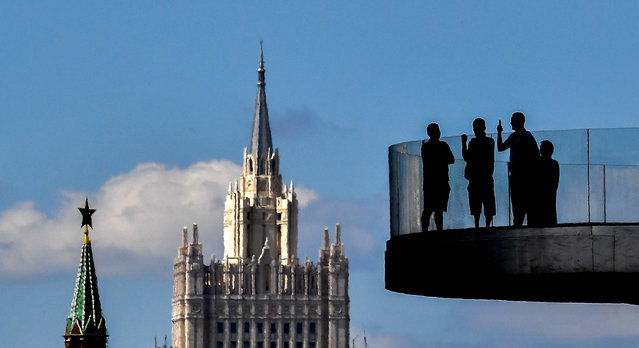 People stand on a bridge at the Zaryadye park with a Stalin-era skyscraper and the Kremlin's tower on the background in central Moscow on June 29, 2020. (Photo by Yuri Kadobnov/AFP Photo) 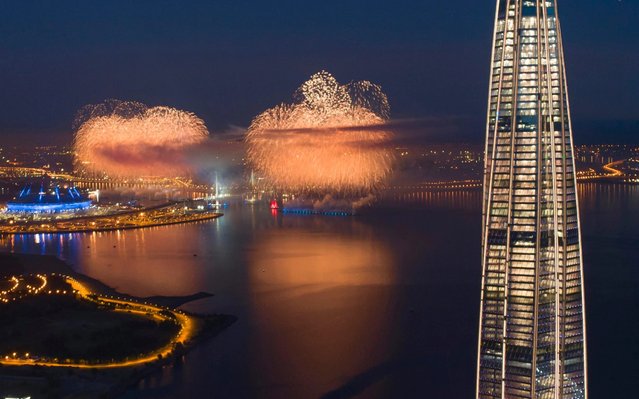 In this aerial photo a brig with scarlet sails, center, travels and fireworks explode at the Finnish Gulf coast during the Scarlet Sails festivities marking school graduation in St. Petersburg, Russia, early Sunday, June 28, 2020, with business tower Lakhta Centre, the headquarters of Russian gas monopoly Gazprom on the right. This year the festival is not to be held in the city center, but on the Finnish Gulf due to the coronavirus pandemic. There are no spectators but the event is broadcast on television. (Photo by Dmitri Lovetsky/AP Photo) 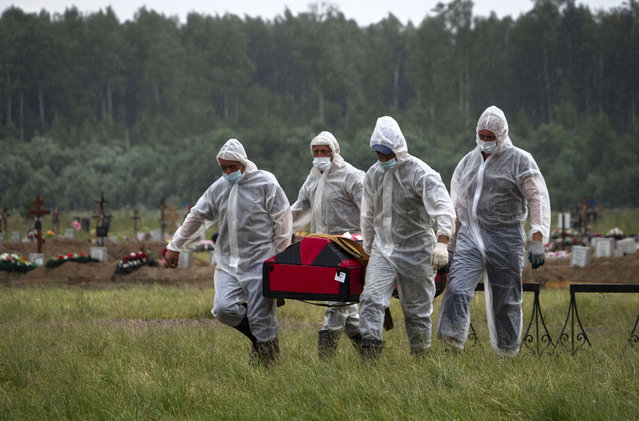