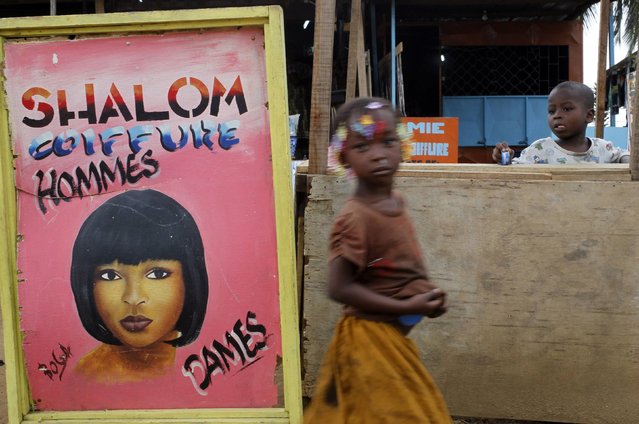 Children play near a hairdressing salon sign at “Colombie” (Colombia), a shanty town, in Abidjan, in this file picture taken August 5, 2014. While still largely based in the informal economy, the African haircare business has become a multi-billion dollar industry that stretches to China and India and has drawn global giants such as L'Oreal and Unilever. Hairdressers are a fixture of markets and taxi ranks across Africa, reflecting both the continent's rising incomes and demand from hair-conscious women. (Photo by Luc Gnago/Reuters) 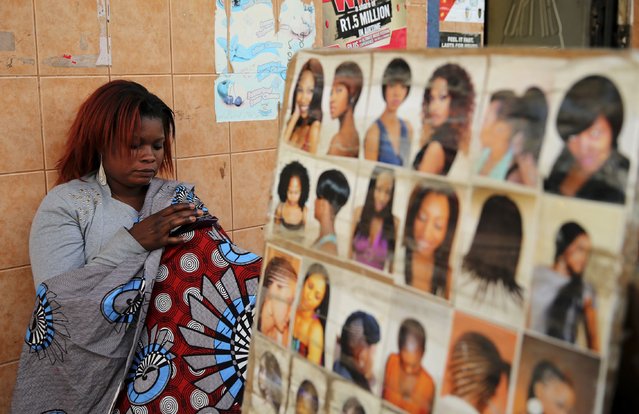 A hairdresser uses her phone as she waits for clients at a makeshift saloon in Soweto, August 4, 2014. Market research firm Euromonitor International sees the liquid haircare market growing by about 5 percent from 2013 to 2018 in Nigeria and Cameroon, with a slight decline for the more mature South African market. (Photo by Siphiwe Sibeko/Reuters) 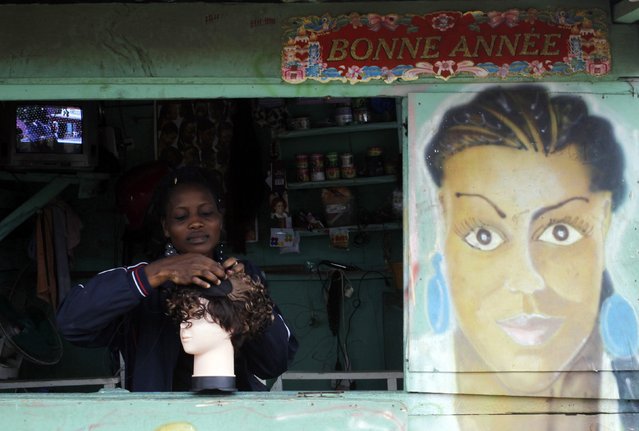 A woman preparing a wig at her hair salon at a shanty town in Abidjan. While reliable Africa-wide figures are hard to come by, market research firm Euromonitor International estimates $1.1 billion of shampoos, relaxers and hair lotions were sold in South Africa, Nigeria and Cameroon alone last year. (Photo by Luc Gnago/Reuters) 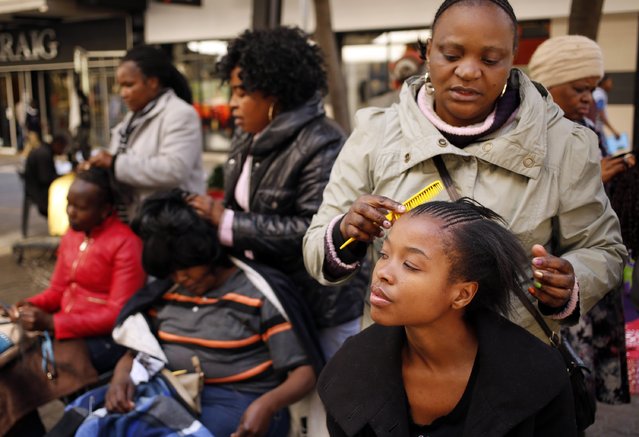 Hairdressers attend to clients in downtown Johannesburg, August 5, 2014. This does not include sales from more than 40 other sub-Saharan countries, or the huge “dry hair” market of weaves, extensions and wigs crafted from everything from synthetic fibre to human or yak hair. (Photo by Siphiwe Sibeko/Reuters) 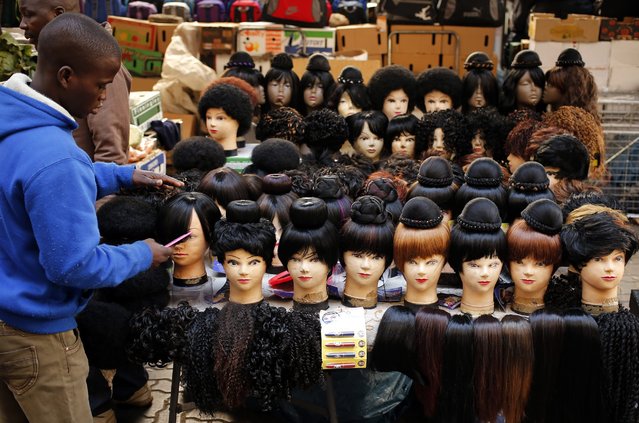 Man prepares wigs as he waits for customers in downtown Johannesburg. Some estimates put Africa's dry hair industry at as much as $6 billion a year; Nigerian singer Muma Gee recently boasted that she spends 500,000 naira ($3,100) on a single hair piece made of 11 sets of human hair. (Photo by Siphiwe Sibeko/Reuters) 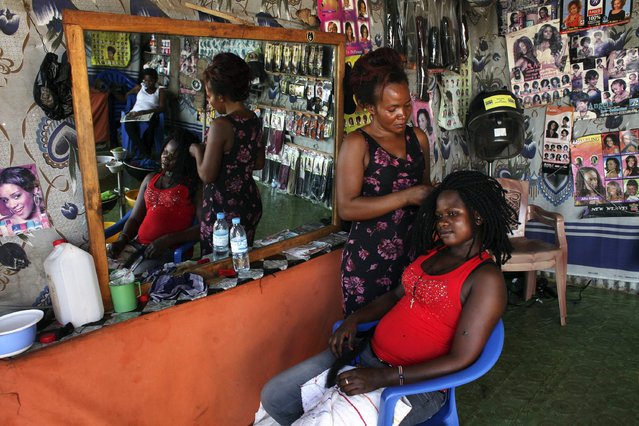 A woman getting her hair done at a salon in Juba. Haircare is a vital source of jobs for women, who make up a large slice of the informal economy on the poorest continent. (Photo by Andreea Campeanu/Reuters) 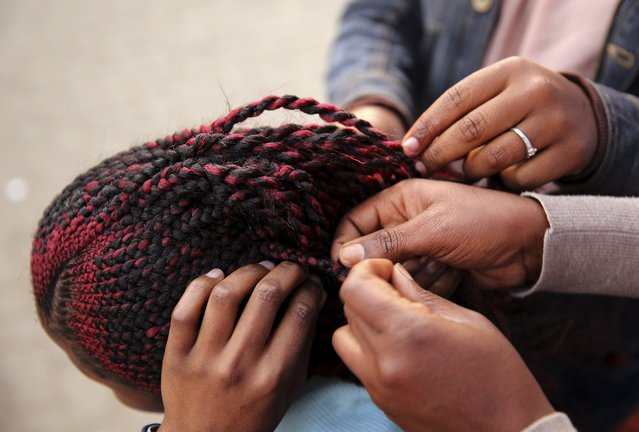 Hairdressers braid the hair of a client in downtown Johannesburg. While South Africans change their hairstyle often, West Africans do so even more, said Bertrand de Laleu, managing director of L'OrealSouth Africa. (Photo by Siphiwe Sibeko/Reuters) 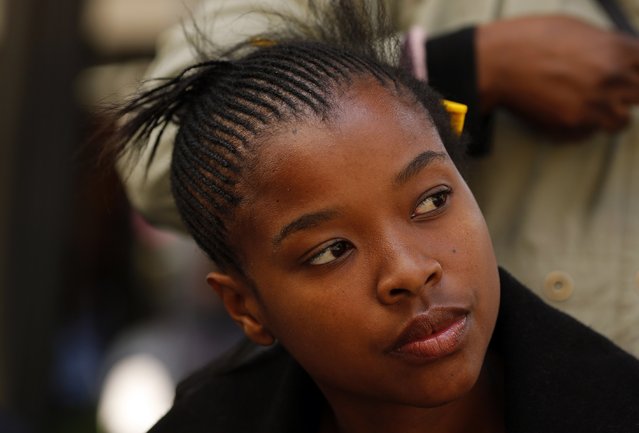 Hairdresser attends to a client in downtown Johannesburg. While the South African hair market remains divided, salons are looking to boost revenues by drawing in customers across ethnic groups, meaning hairdressers who once catered only for whites will need stylists who can also work on African hair. (Photo by Siphiwe Sibeko/Reuters) 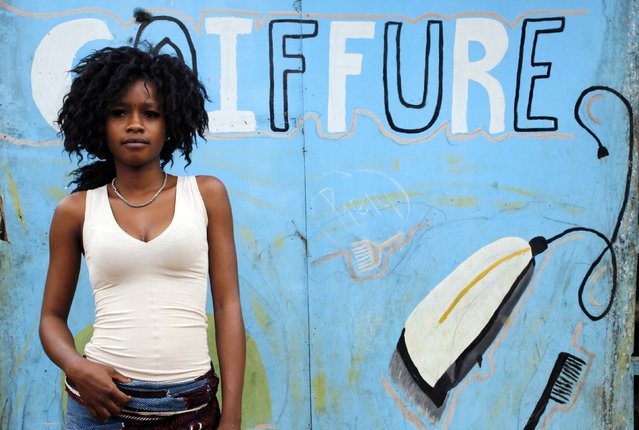 A woman posing in front of a hairdressing salon at a shanty town in Abidjan. L'Oreal is looking to build on its “Dark and Lovely” line of relaxers and other products with more research into African hair and skin and has factories in South Africa and Kenya producing almost half the products it distributes on the continent. (Photo by Luc Gnago/Reuters) 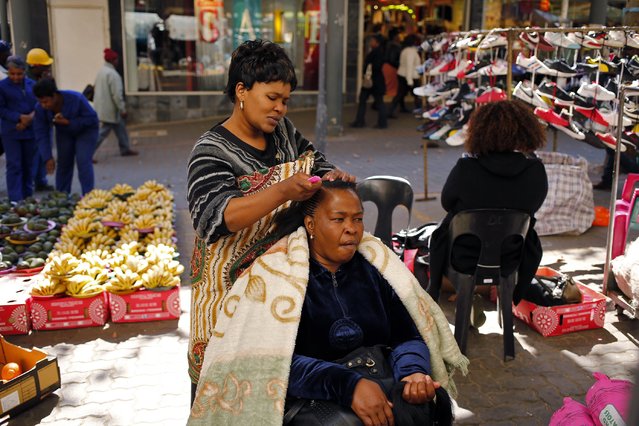 Hairdresser braids the hair of a client in downtown Johannesburg. The French cosmetics giant L'Oreal this year opened what it billed as South Africa's first multi-ethnic styling school, training students of all races on all kinds of hair, something that would have been unthinkable before the end of apartheid in 1994. (Photo by Siphiwe Sibeko/Reuters) 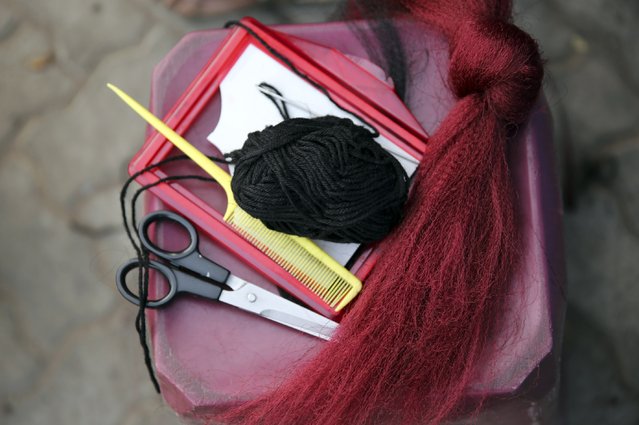 Items used in hairdressing are seen at a makeshift saloon in Soweto. Today there are more than 100 brands of hair in South Africa, making the market worth about $600 million, he said, roughly four times more than in 2005. Much of the hair sold is the cheaper synthetic type and comes from Asia. Pricier natural hair is prized because it lasts longer, retains moisture and can be dyed. (Photo by Siphiwe Sibeko/Reuters)
Edit Del
15 Aug 2014 09:08:00, post received 0 comments
Publication archive:
←   →
Popular tags:
All tags
Last searches: