Fact Brides Marry in Russia's “First LGBT Wedding” Thanks to Legal Loophole
“A marriage of two brides has been officially registered in Russia’s St. Petersburg, despite the country’s laws prohibiting same-s*x marriages. The couple has managed to find a loophole in the system, puzzling authorities. The two brides arrived at the wedding registry office on Friday both dolled up in wedding dresses and holding brides' bouquets. Surrounded by their friends, Irina and Alyona signed papers which mark the official start of their new life as a family.

Practically speaking, the wedding is illegal and completely contradicts Russian legislation, which prohibits same-s*x marriages. However, in legal terms it does not. The trick here is that one of the brides is legally not a woman. “Yes, in my passport it says «male»,” Irina has told RT. Irina speaks of herself as a transsexual rather than transgender. “Transgender is a term to describe discrepancies between social and biological s*x. I am transsexual, meaning that despite the fact that I have XY chromosomes, psychologically I am a woman,” she explained.

Irina wears women's clothes and puts on make-up. Still on hormone therapy, visually she already looks like a real woman, though under the law she is not. The couple has used this fact to officially register their relationship, because under the Family Code of Russia marriage is “a voluntary consent of a man and a woman.” Thus, since Irina’s passport belongs to ‘male’ and Alyona’s to ‘female’ their marriage does not violate any law.

However, the event has begun to evolve into a scandal with St. Petersburg MP Vitaly Milonov, known for his anti-LGBT drive, vowing to launch a probe to check the legality of the marriage. “I understood their [registry office workers'] unconvincing arguments; they formally approached the issue and saw passports, but not people. I told the head [of the wedding registry office] that it is criminal negligence,” he told NTV. Milonov said he plans to get prosecutors involved to try to avoid such “ugly insults to millions of Russian families in the future”. – Russia Today 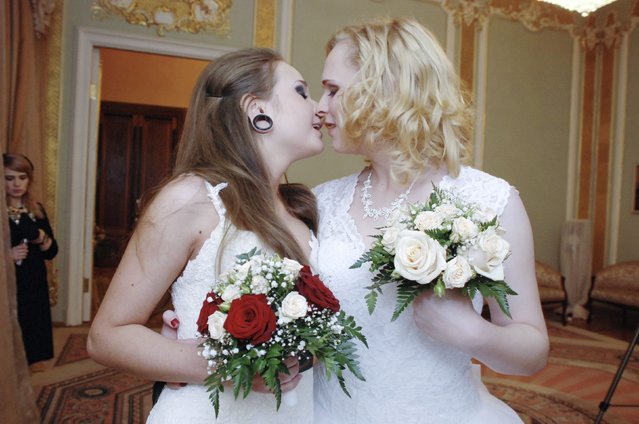 Two brides kiss during their wedding ceremony to each other at the wedding registry office in St. Petersburg November 7, 2014. The two St. Petersburg women married in the official city ceremony last week, seemingly circumventing Russia's ban on same-s*x marriages. One of the brides was born a man but is undergoing hormone therapy and considers herself a woman. Though her male passport identity ensured the marriage was legal by Russian law, a St. Petersburg lawmaker has vowed to nullify their wedding. (Photo by Reuters/Stringer) 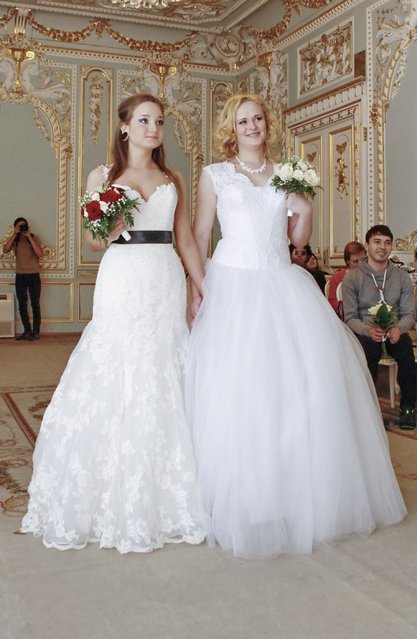 Two brides attend their wedding ceremony to each other at the wedding registry office in St. Petersburg November 7, 2014. (Photo by Reuters/Stringer) 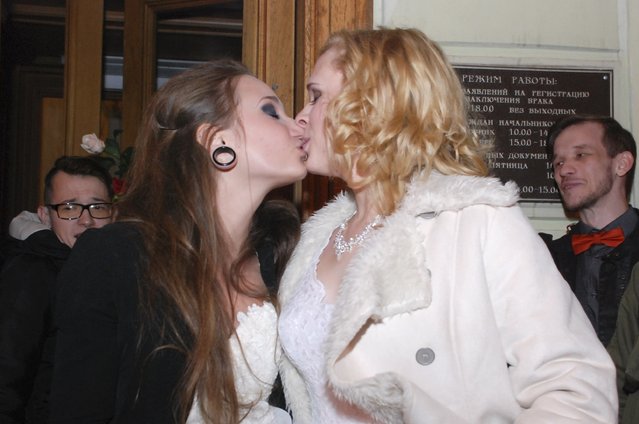 Two brides kiss after their wedding ceremony to each other outside the wedding registry office in St. Petersburg November 7, 2014. (Photo by Reuters/Stringer) 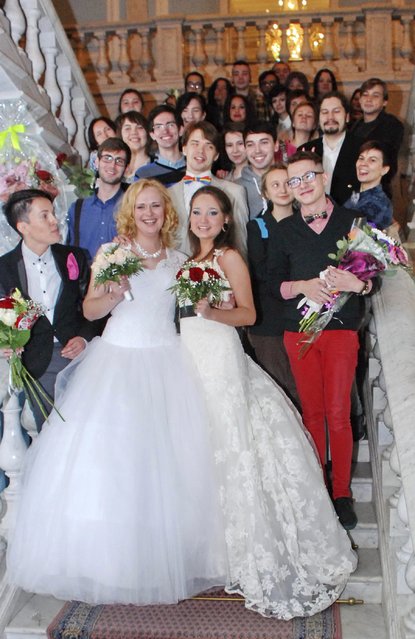 Two brides pose with their guests after their wedding ceremony to each other at the wedding registry office in St. Petersburg November 7, 2014. (Photo by Reuters/Stringer)
Edit Del
12 Nov 2014 14:22:00, post received 0 comments
Publication archive:
←   →
Popular tags:
All tags
Last searches: