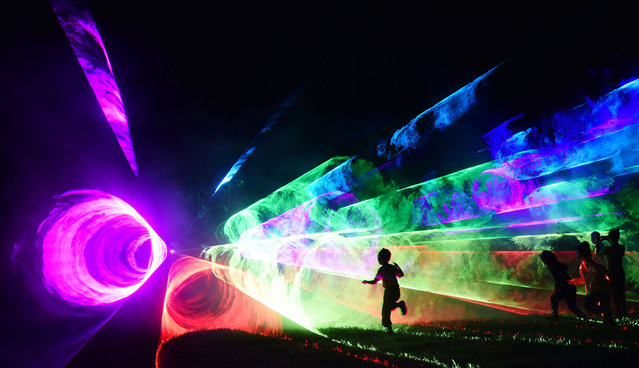 People watch a 3D laser show at a valley on August 22, 2020 in Zhangjiakou, Hebei Province of China. (Photo by Chen Xiaodong/VCG via Getty Images) 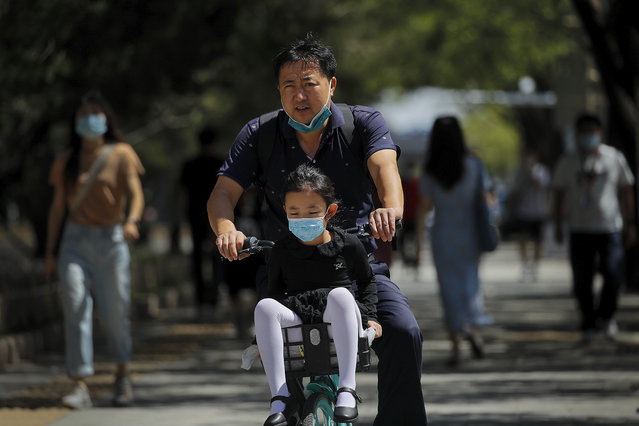 A man and a child wearing face masks to help curb the spread of the coronavirus ride a bicycle of bike-sharing companies in Beijing, Monday, August 24, 2020. China has gone eight days without reporting a new local case of COVID-19, with the Beijing International Film Festival among public events that are returning. (Photo by Andy Wong/AP Photo) 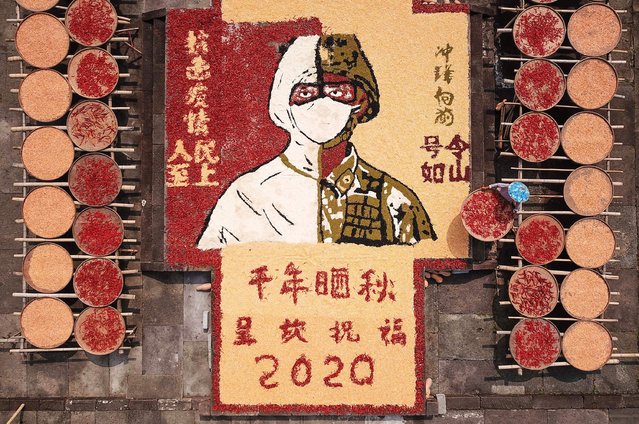 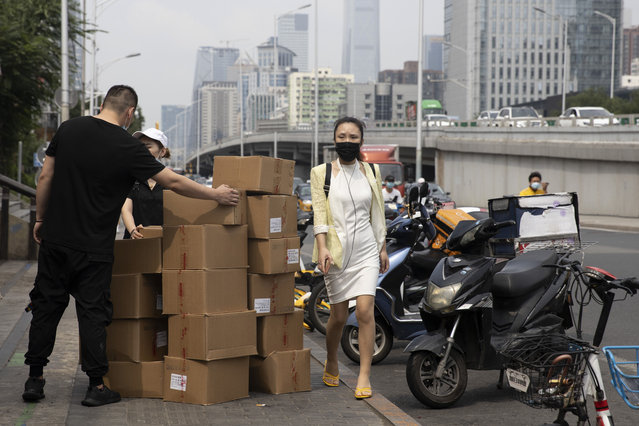 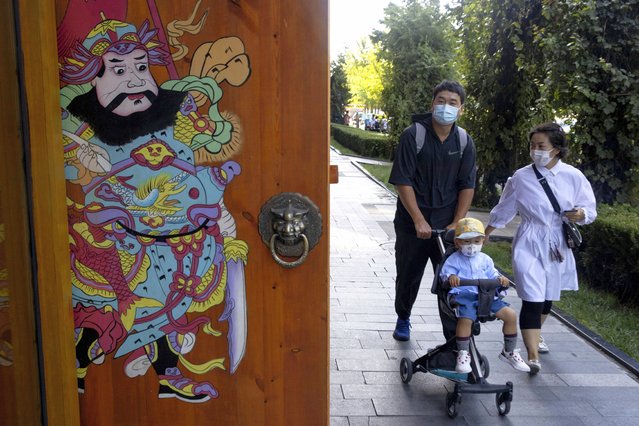 Residents wearing masks to curb the spread of the coronavirus walk on a Beijing street on Monday, August 24, China has gone several days without reporting a new local case of COVID-19, with the Beijing International Film Festival among public events that are returning. (Photo by Ng Han Guan/AP Photo) 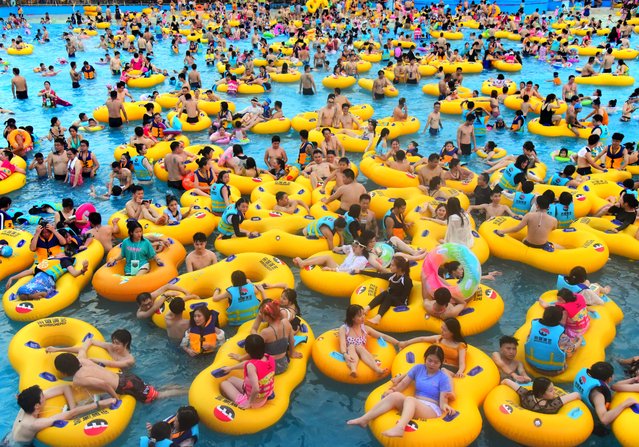 Mr. Xu, with the help of Langlanglang Water Park, planned a proposal to her girlfriend and received thousands of blessings and witness in Hangzhou city, east China's Zhejiang province, 22 August 2020. (Photo by Rex Features/Shutterstock) 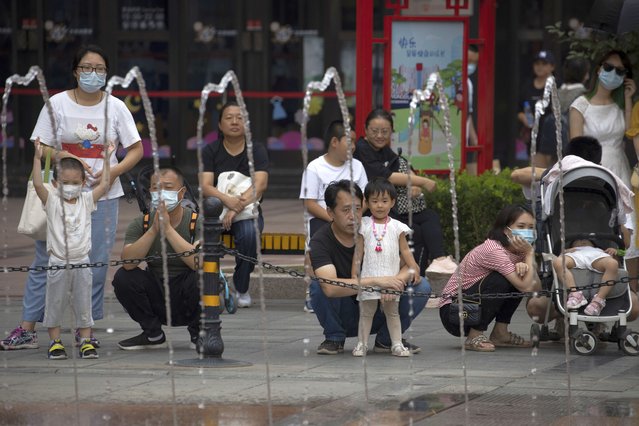 Residents wearing mask to protect from the coronavirus watch a water fountain at a retail street in Beijing, China on Saturday, August 29, 2020. About one-third of students returned to school in the Chinese capital on Saturday in a staggered start to the new school year because of the coronavirus. (Photo by Ng Han Guan/AP Photo) 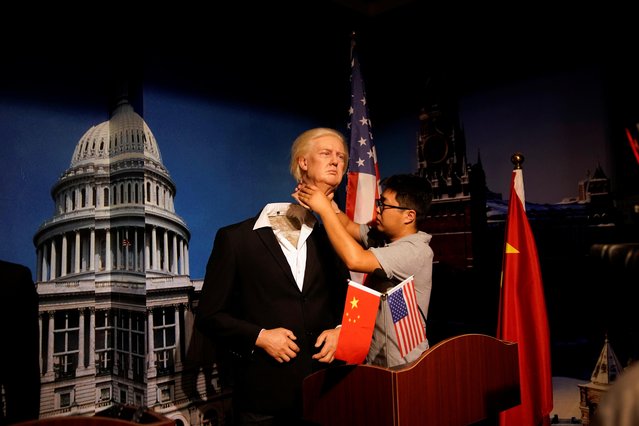 A technician demonstrates for the camera the assembling of a wax figure of President Trump at a wax museum of Shanghai Maiyi Arts in Shanghai, China on August 21, 2020. Shanghay Maiyi Arts was founded in 2012 as a manufacturer and supplier of wax figures. Located in the outskirts of Shanghai, about an hour's drive from the city centre, its exhibition hall also doubles as makeshift museum, where guests can pose next to replicas of North Korean leader Kim Jong-Un, martial arts star Jackie Chan, and others. Zeng says that by 2019, the company was shipping up to 700 figures annually to customers, with about one-third going overseas. (Photo by Aly Song/Reuters) 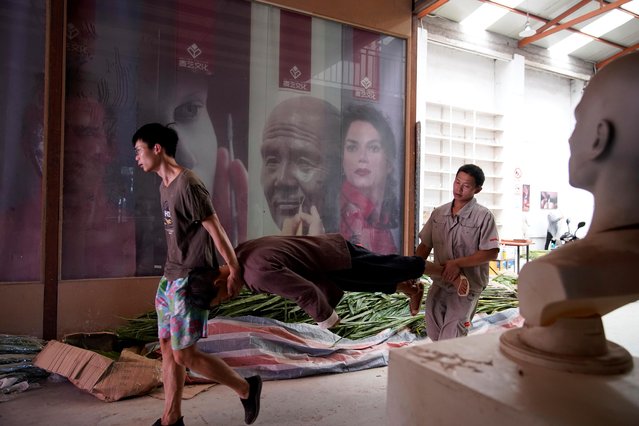 Technicians carry a wax figure at a workshop of Shanghai Maiyi Arts in Shanghai, China on August 21, 2020. (Photo by Aly Song/Reuters) 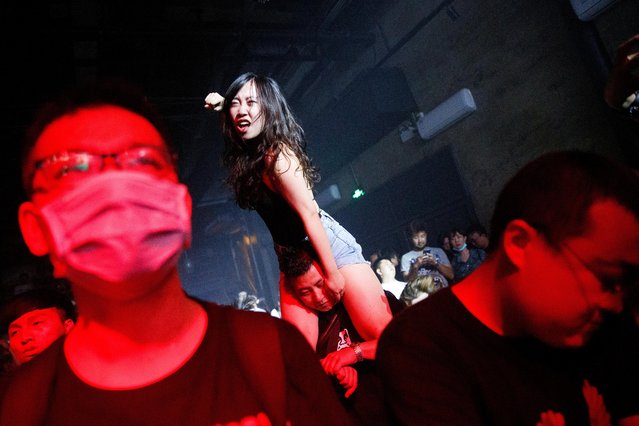 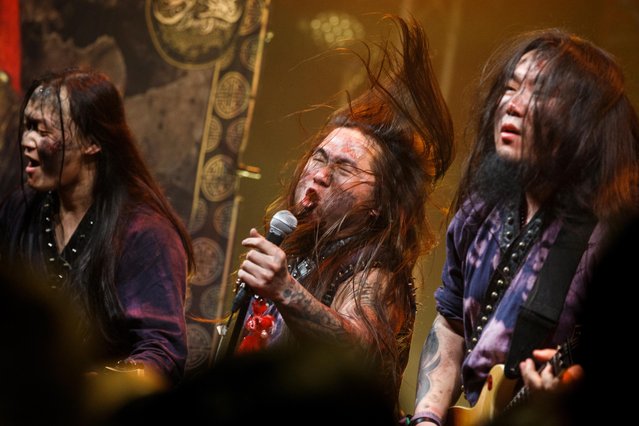 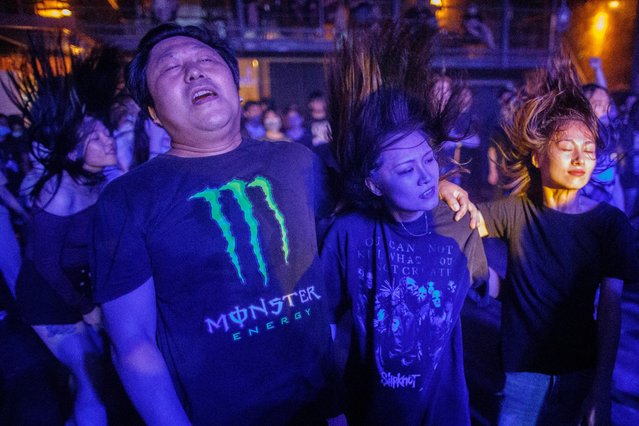 People dance during a heavy metal concert at Omni Space following an outbreak of the coronavirus disease (COVID-19) in Beijing, China, August 14, 2020. (Photo by Thomas Peter/Reuters) 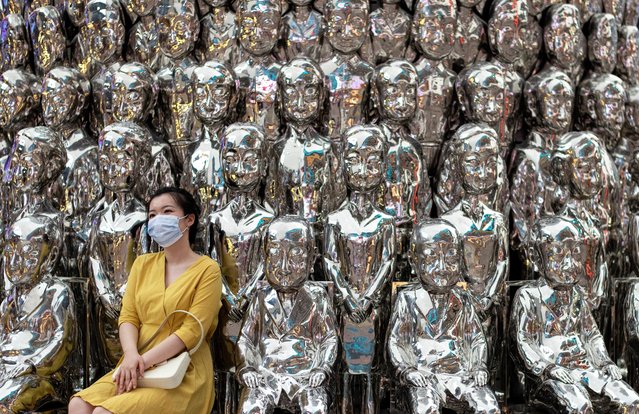 A woman wearing a face mask poses for a picture at a shopping centre in Beijing on August 23, 2020. (Photo by Noel Celis/AFP Photo) 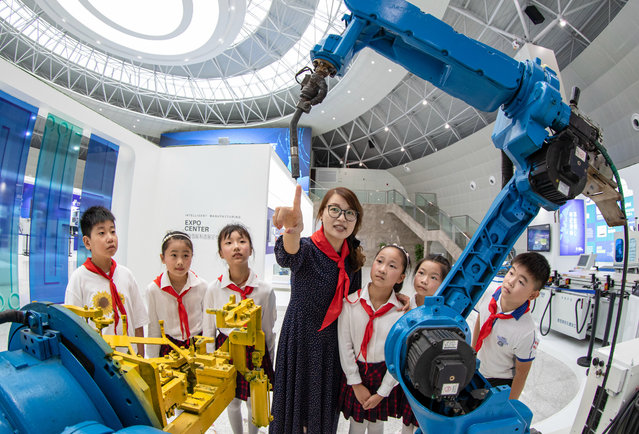 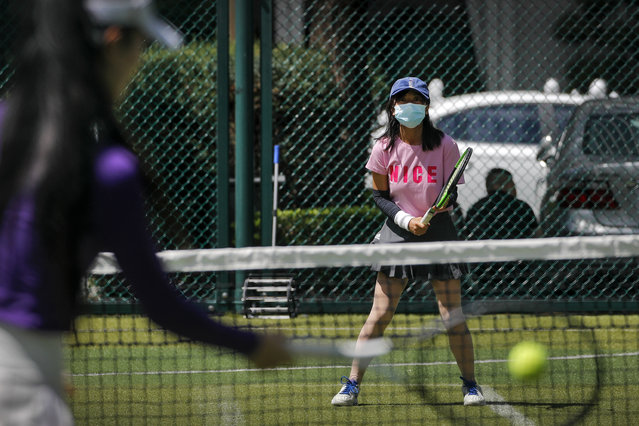 A woman wearing a face mask to help curb the spread of the coronavirus plays tennis with her friend at a court in Beijing, Monday, August 24, 2020. China has gone eight days without reporting a new local case of COVID-19, with the Beijing International Film Festival among public events that are returning. (Photo by Andy Wong/AP Photo) 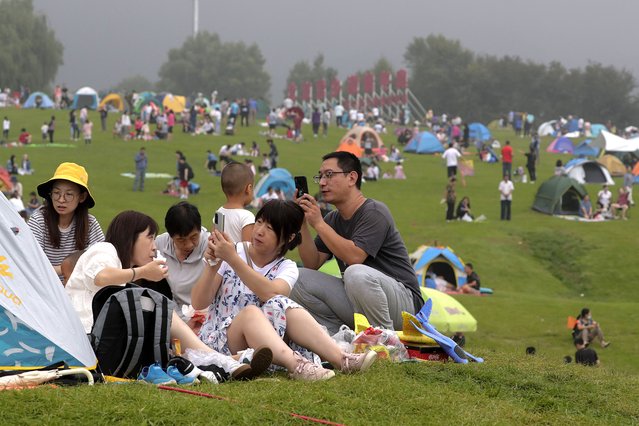 People take smartphones photos as people set camps on a scenic mountain in Yanqing, outskirt of Beijing on Sunday, August 30, 2020. China currently has more than 200 people being treated in hospital for COVID-19, with another more than 300 in isolation after testing positive for the virus without displaying symptoms. (Photo by Andy Wong/AP Photo) 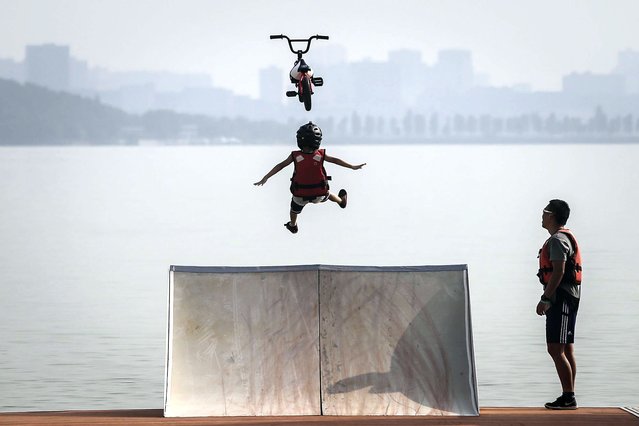 A boy cycling enthusiast performs a stunt with a bicycle before falling into the East Lake in on August 22, 2020 in Wuhan, Hubei province, China. This activity, which requires participants to ride their bikes and jump into the lake, attracts many extreme cycling enthusiasts from the city.The event was held in 2010 and is the ten time this year. There have been no recorded cases of community transmission in Wuhan since May. Life in Wuhan returned to normal. (Photo by Getty Images/China Stringer Network) 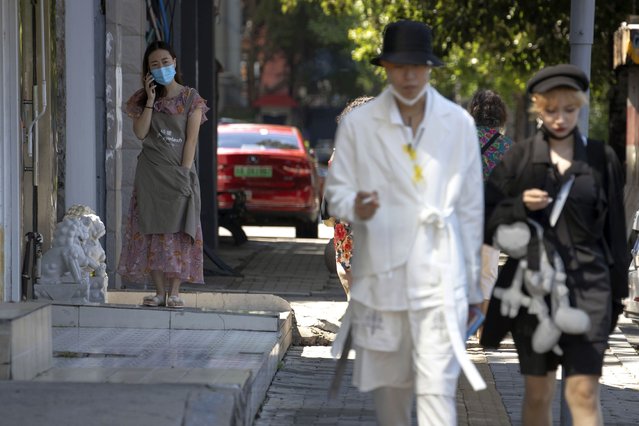 A resident wears a mask to curb the spread of the coronavirus as she speaks on her phone in Beijing on Monday, August 24, 2020. (Photo by Ng Han Guan/AP Photo) 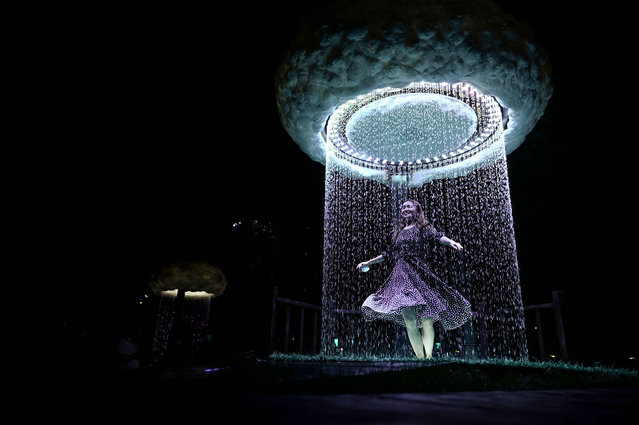