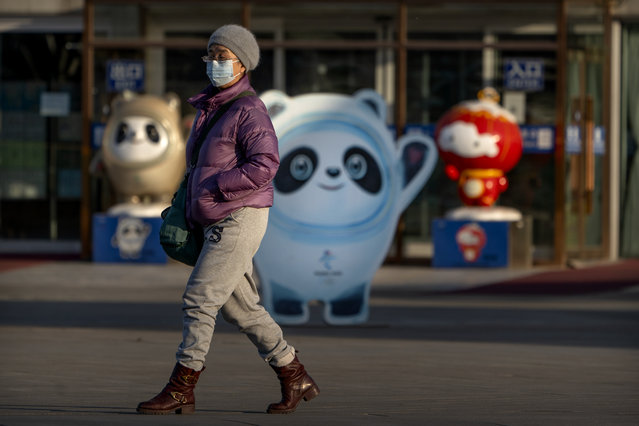 A woman wearing a face mask to protect against the spread of the coronavirus walks past statues of the 2022 Beijing Winter Olympics and Paralympics mascots on the Olympic Green in Beijing, Tuesday, February 2, 2021. The 2022 Beijing Winter Olympics will open a year from now. Most of the venues have been completed as the Chinese capital becomes the first city to hold both the Winter and Summer Olympics. Beijing held the 2008 Summer Olympics. But these Olympics are presenting some major problems. They are already scarred by accusations of rights abuses including “genocide” against more than 1 million Uighurs and other Muslim ethnic groups in western China. (Photo by Mark Schiefelbein/AP Photo) 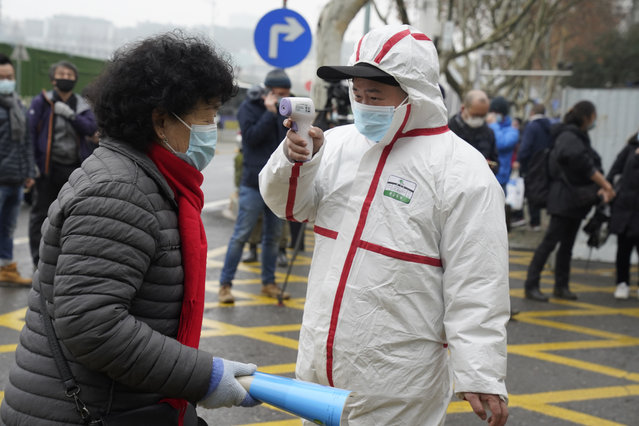 A worker in protective overalls takes the temperature of a woman entering the Hubei Center for Disease Control and Prevention as the World Health Organization team makes a field visit in Wuhan in central China's Hubei province on Monday, February 1, 2021. A World Health Organization team investigating the origins of the coronavirus pandemic visited a provincial disease control center that had an early hand in managing the outbreak. (Photo by Ng Han Guan/AP Photo) 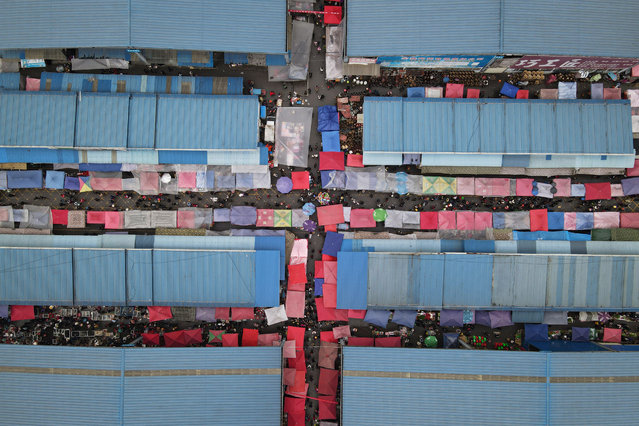 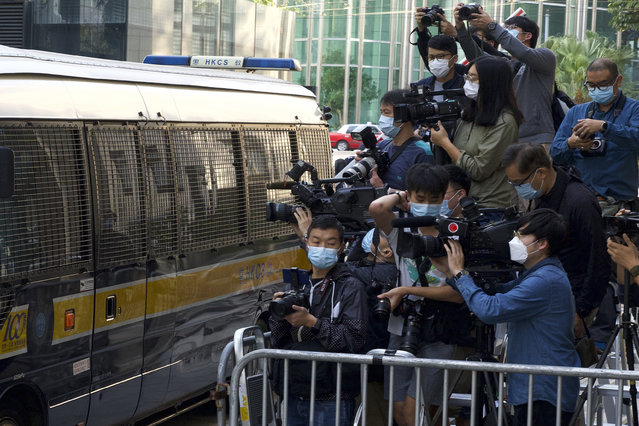 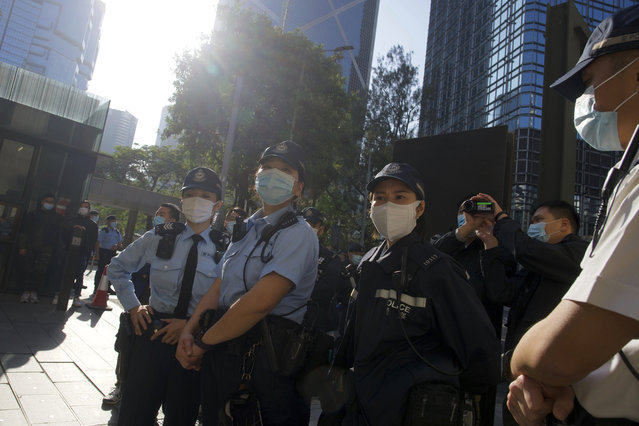 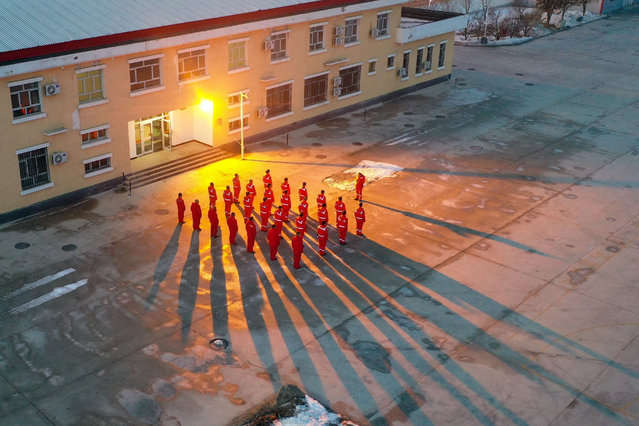 Maintenance workers go through attendance check before their shift at the Horgos initial compressor station of the West Pipeline Company under China Oil & Gas Pipeline Network Corporation (PipeChina) in Horgos, northwest China's Xinjiang Uygur Autonomous Region, February 4, 2021. The Horgos initial compressor station is the first station of the China-Central Asia Gas Pipeline in China, and is also a critical point of China's West-to-East Gas Pipeline. During winter heating season, more than 140 million cubic meters of natural gas goes through the station every day, all the way to homes and offices across the country. A team of young people, most of them under 30 years old, are combing through this maze of steel pipes for any possible error, to ensure that more than half a billion people, or over one third of the country's population, will steadily benefit from the clean energy. (Photo by Xinhua News Agency/Rex Features/Shutterstock) 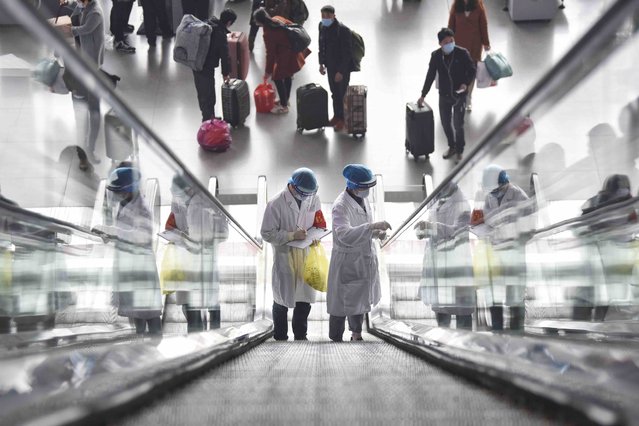 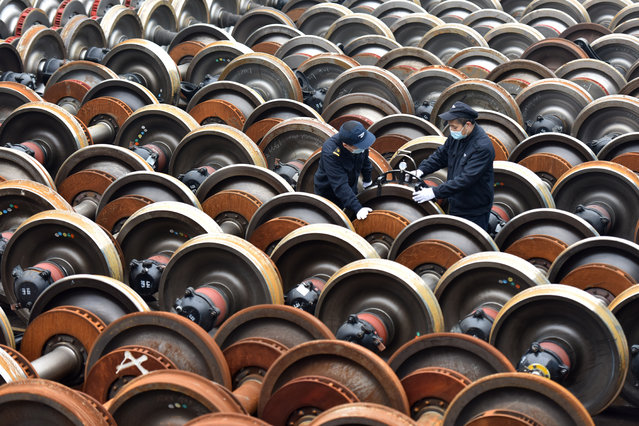 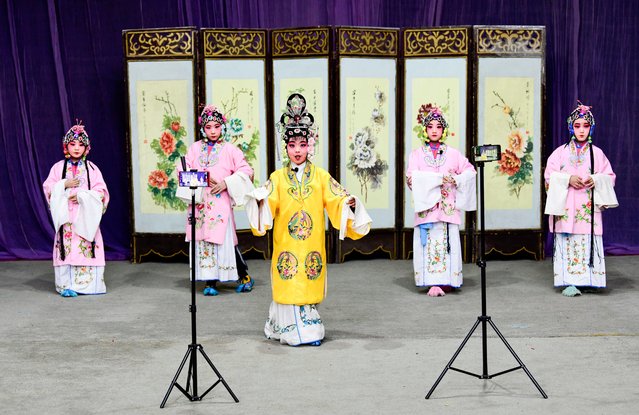 A live stream is broadcast on the mobile phones as children perform Peking Opera to welcome the upcoming Chinese New Year, the Year of the Ox, on February 1, 2021 in Hohhot, Inner Mongolia Autonomous Region of China. (Photo by Wang Zheng/VCG via Getty Images) 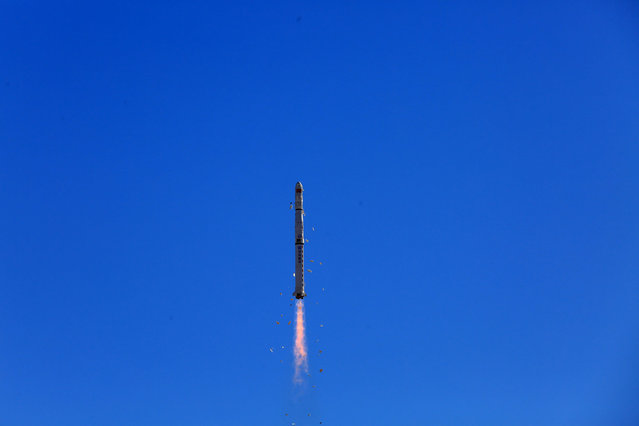 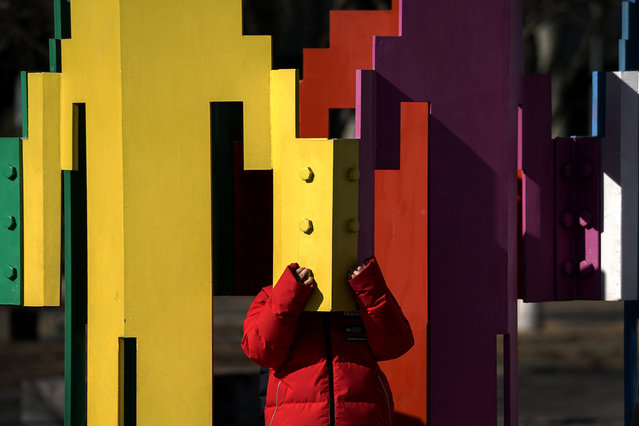 A child plays at a colorful human tower art installation on the Olympic Park in Beijing, Tuesday, February 2, 2021. China has largely stopped domestic transmission of the virus through sometimes draconian measures, including strict testing and electronic surveillance. Mask wearing in public is standard and lockdowns are routinely imposed on communities and even entire cities where cases are detected. (Photo by Andy Wong/AP Photo) 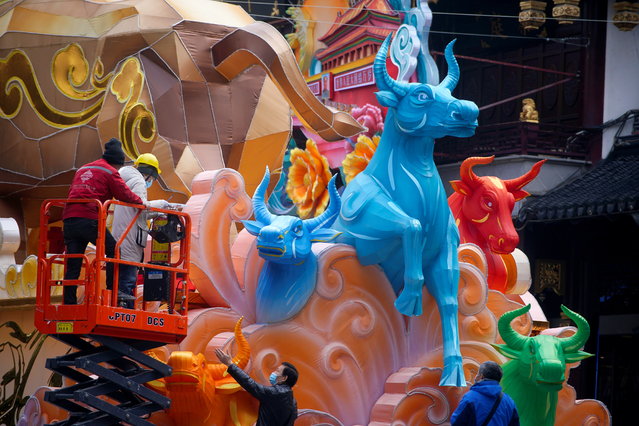 People work at an ox installation set up ahead of the Chinese Lunar New Year festivity at Yu Garden, following the coronavirus disease (COVID-19) outbreak in Shanghai, China on January 27, 2021. (Photo by Aly Song/Reuters) 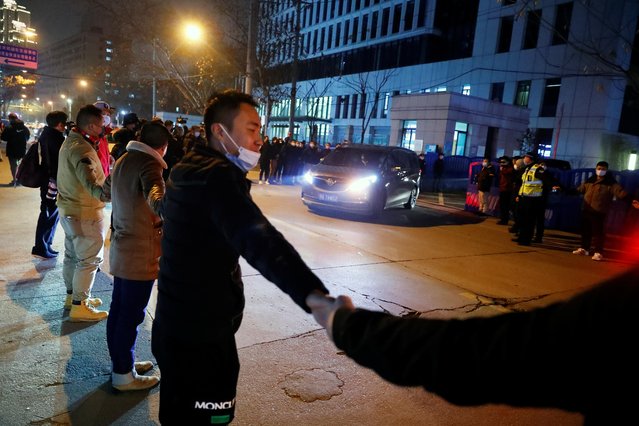 Security personnel forms a cordon as the convoy carrying the World Health Organization (WHO) team tasked with investigating the origins of the coronavirus disease (COVID-19) pandemic leaves the Wuhan Center for Disease Control and Prevention, in Wuhan, China on February 1, 2021. (Photo by Thomas Peter/Reuters) 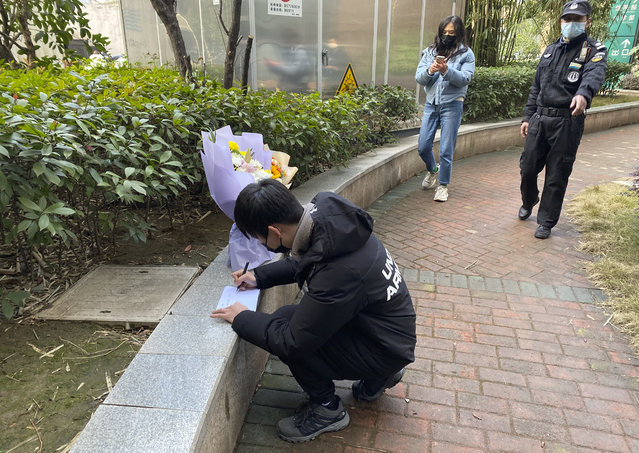 A security guard stands neaby as a man visiting the Wuhan Central Hospital leaves flowers in memory of Li Wenliang, the whistleblower doctor who sounded the alarm and was reprimanded by local police for it in the early days of Wuhan's pandemic, prior to the anniversary of his death, in central China's Hubei province, Saturday, February 6, 2021. Dr. Li Wenliang died in the early hours of Feb. 7 from the virus first detected in this Chinese city. A small stream of people marked the anniversary at the hospital. The 34-year-old became a beloved figure and a potent symbol in China after it was revealed that he was one the whistleblowers who authorities had punished early for “spreading rumors” about a SARS-like virus. (Photo by Ng Han Guan/AP Photo) 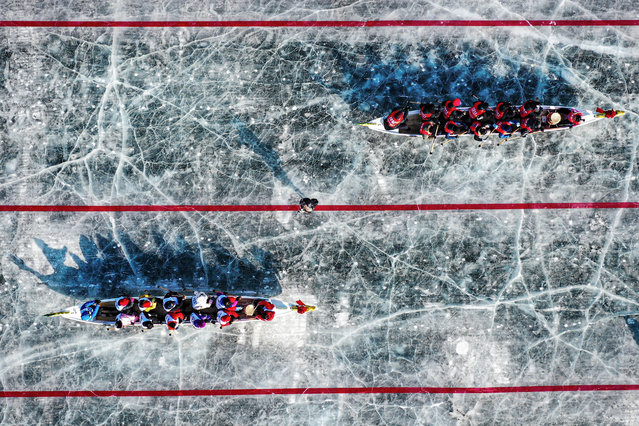 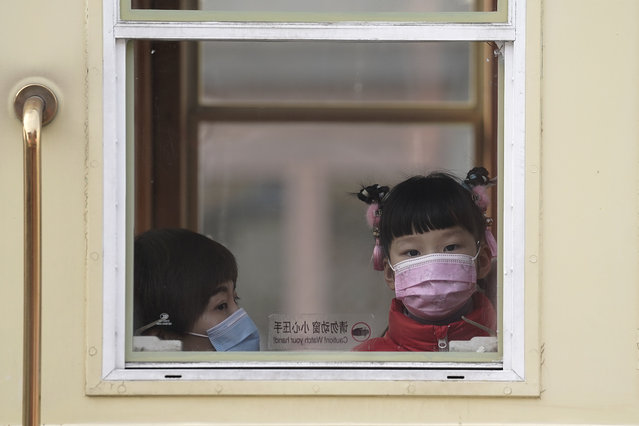 A child and a woman, both wearing face masks to help curb the spread of the coronavirus, ride a train at Qianmen Street, a popular tourist spot in Beijing, Sunday, January 31, 2021. A World Health Organization team looking into the origins of the coronavirus pandemic on Sunday visited the seafood market in the Chinese city of Wuhan that was linked to many early infections. (Photo by Andy WongAP Photo) 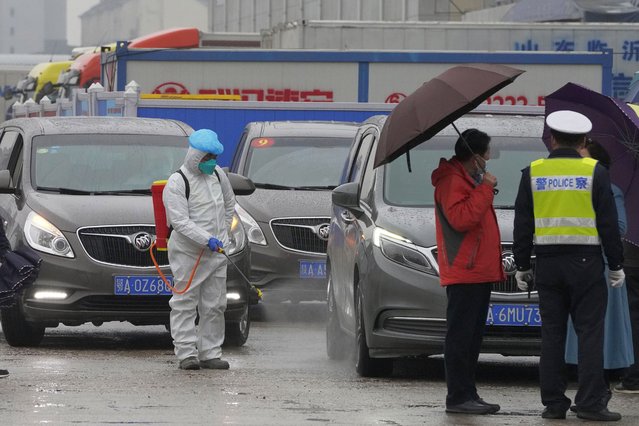 A worker in protective overall disinfects a vehicle from the World Health Organization convoy while they were visiting the Baishazhou wholesale market on the third day of field visit in Wuhan in central China's Hubei province on Sunday, January 31, 2021. (Photo by Ng Han Guan/AP Photo) 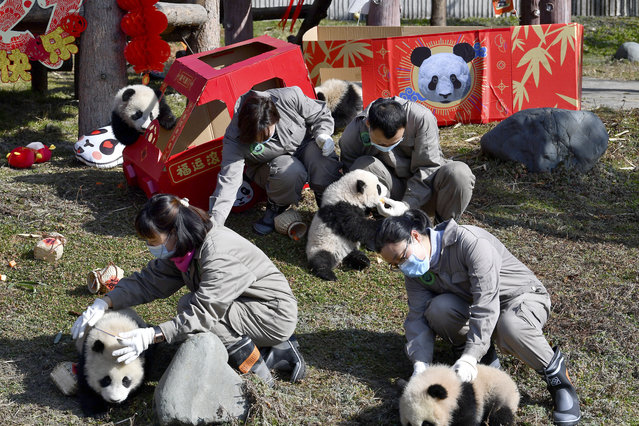 Researchers hold some of the ten baby pandas born during the year 2020 at the China Conservation and Research Center for the Giant Panda at the Wolong Nature Reserve in southwestern China's Sichuan province, Wednesday, February 3, 2021. Ten baby pandas made their debut in China's leading panda reserve in the country's southwest on Wednesday morning ahead of the Lunar New Year. (Photo by Chinatopix via AP Photo) 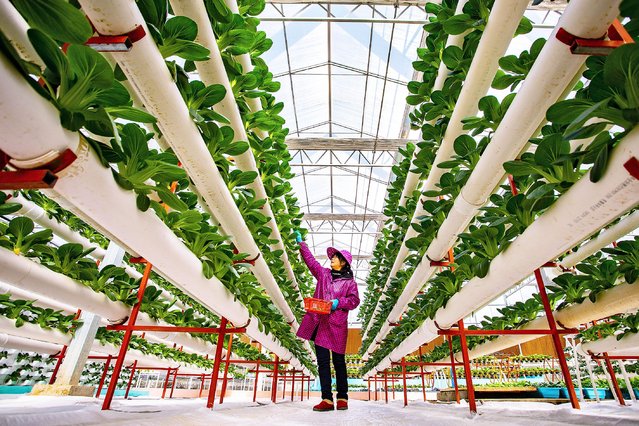 A farmer arranges vegetable at a greenhouse on January 29, 2021 in Hukou County, Jiangxi Province of China. (Photo by Zhang Yu/VCG via Getty Images) 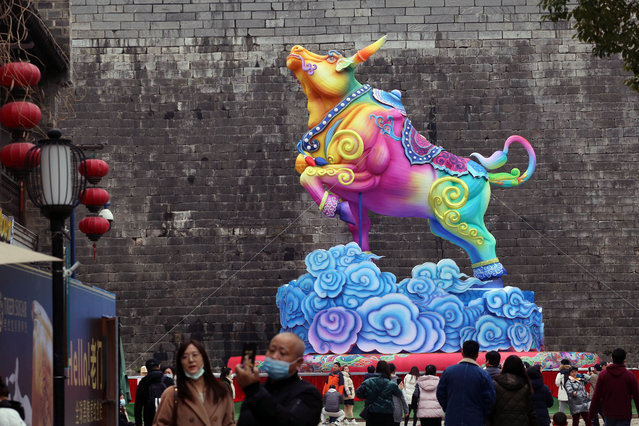 A bull-shaped lantern is on display before the Chinese New Year, the Year of the Ox, on January 31, 2021 in Nanjing, Jiangsu Province of China. (Photo by VCG/VCG via Getty Images) 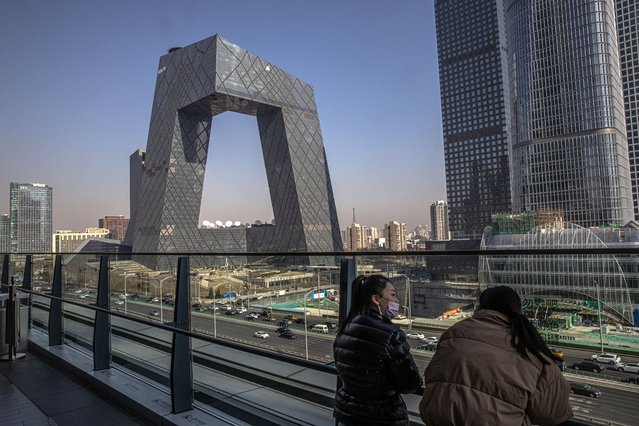 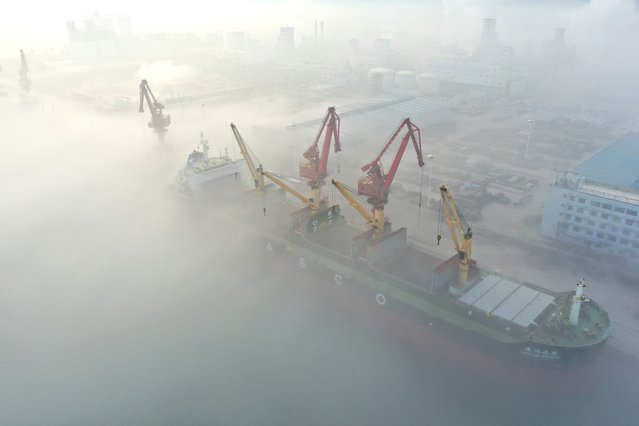 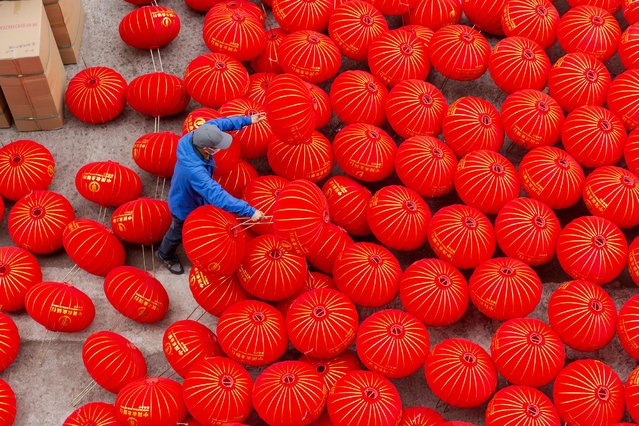