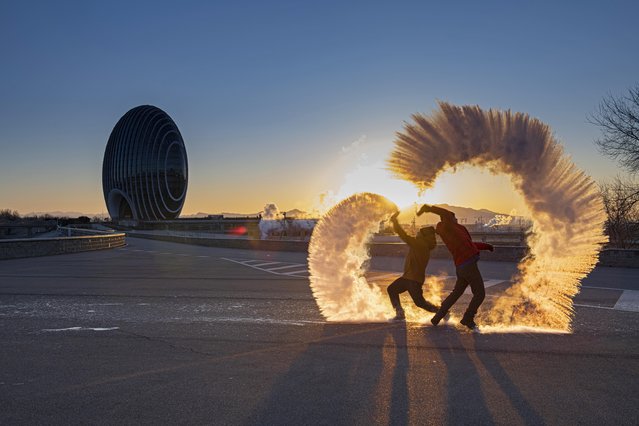 Two citizens splash hot water which is quickly frozen in the cold air on January 7, 2021 in Beijing, China. (Photo by Peng Yucai/VCG via Getty Images) 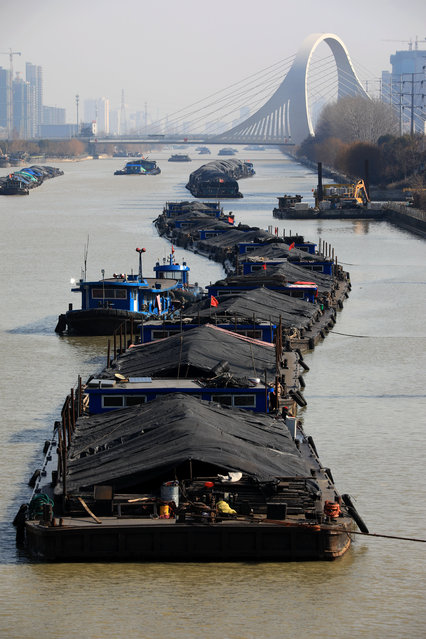 There is an endless stream of ships carrying electric coal along the Beijing-Hangzhou Grand Canal, and the passing docks are full of ships waiting for coal unloading in Huai'an city, east China's Jiangsu Province, 10 January 2021. (Photo by Rex Features/Shutterstock) 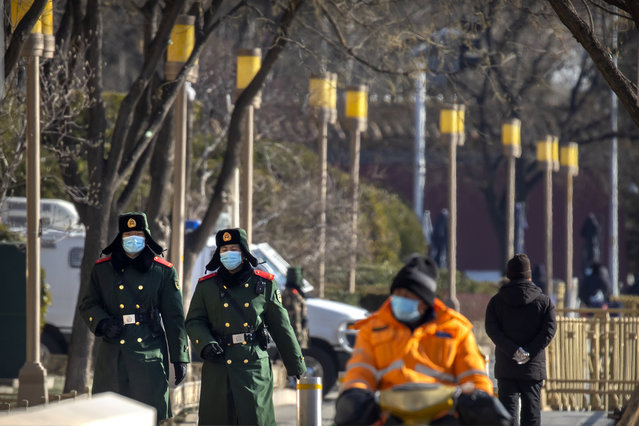 Chinese paramilitary police wearing face masks to protect against the spread of the coronavirus patrol along a street in Beijing, Saturday, January 9, 2021. COVID vaccine shots will be free in China, where more than 9 million doses have been give to date, health officials in Beijing said Saturday. (Photo by Mark Schiefelbein/AP Photo) 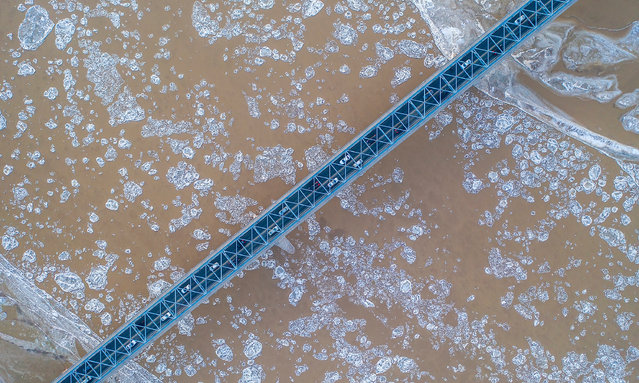 An aerial view of masses of flowing ice on the Yellow River in Binzhou, Shandong province, China on January 8, 2021. (Photo by Costfoto/Barcroft Media via Getty Images) 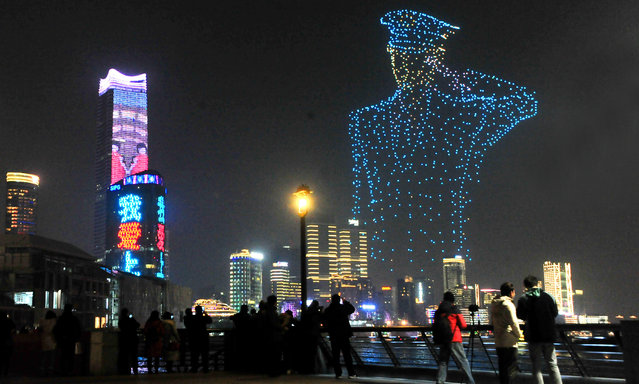 A total of 1,100 drones form a pattern of policeman in the sky to celebrate the first Chinese People's Police Day on January 10, 2021 in Shanghai, China. (Photo by Yang Jianzheng/VCG via Getty Images) 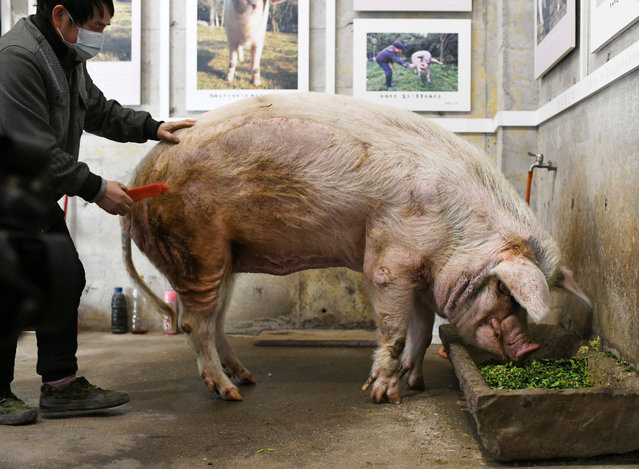 Zhu Jianqiang, or “strong-willed pig”, famous for surviving more than a month buried in the ruins after the magnitude-8.0 Wenchuan earthquake in 2008, feeds on food sent by admirers wishing it a safe winter in Jianchuan Museum, Chengdu city, southwest China's Sichuan province, 11 January 2021. (Photo by Rex Features/Shutterstock) 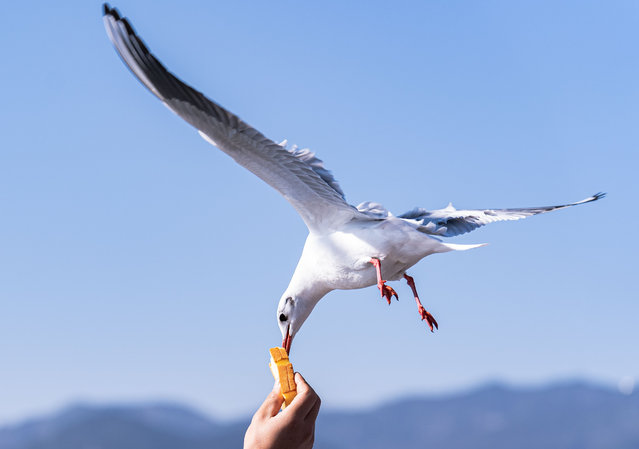 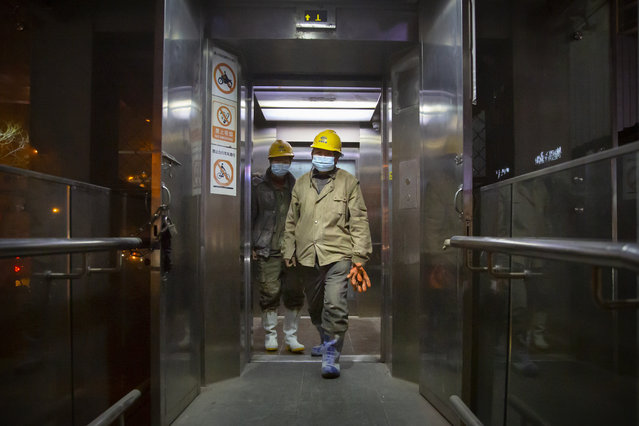 Construction workers wearing face masks to protect against the spread of the coronavirus exit an elevator in Beijing, Wednesday, January 13, 2021. China is concentrating its pandemic prevention efforts in the rural areas as officials urge people to not travel home for the annual Lunar New Year festival, as the country combats its most serious latest outbreak of COVID-19 since the pandemic originally broke out in Wuhan a year ago. (Photo by Mark Schiefelbein/AP Photo) 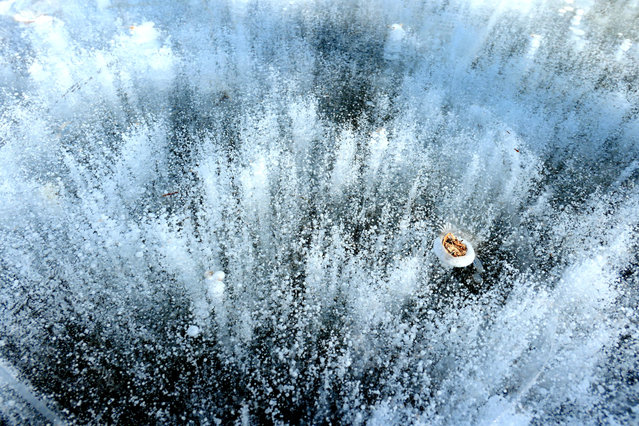 These stunning scenes show methane bubble frozen in the ice of a lake inside Beigong National Forest Park in Beijing, China, 8 January 2021. (Photo by Rex Features/Shutterstock) 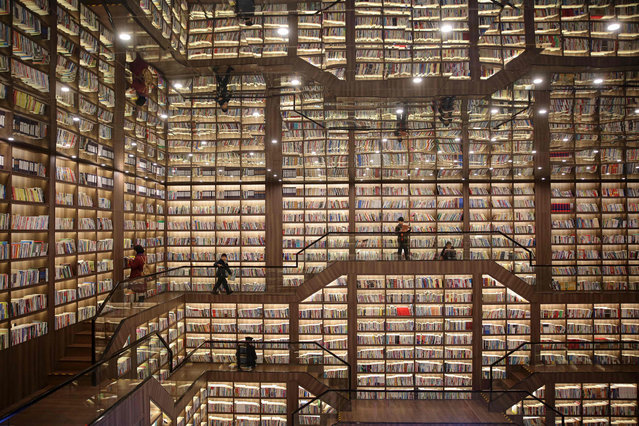 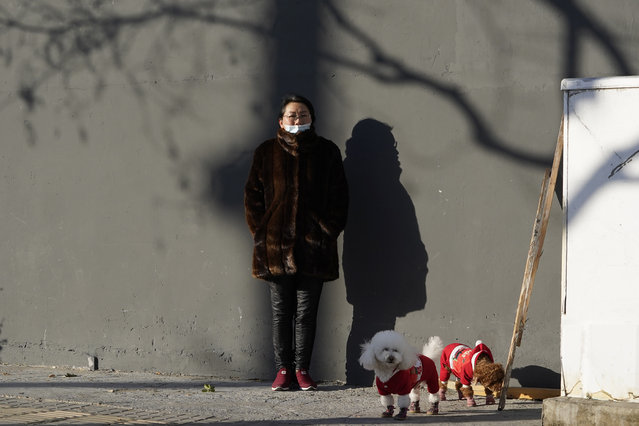 A woman wearing mask to help protect herself from the coronavirus stands in the sun as she walks her dogs in Beijing on Friday, January 8, 2021. With next month's Lunar New Year travel rush looming, the government is telling people to stay put as much as possible and not travel to or from the capital Beijing. (Photo by Ng Han Guan/AP Photo) 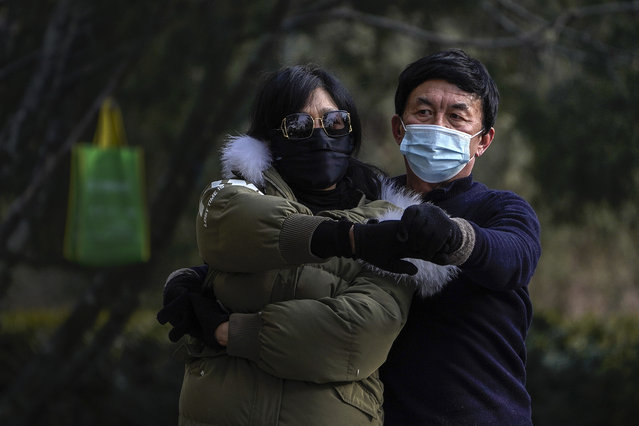 People wearing face masks to help curb the spread of the coronavirus, practice a social dance at a public park in Beijing, Tuesday, January 12, 2021. (Photo by Andy Wong/AP Photo) 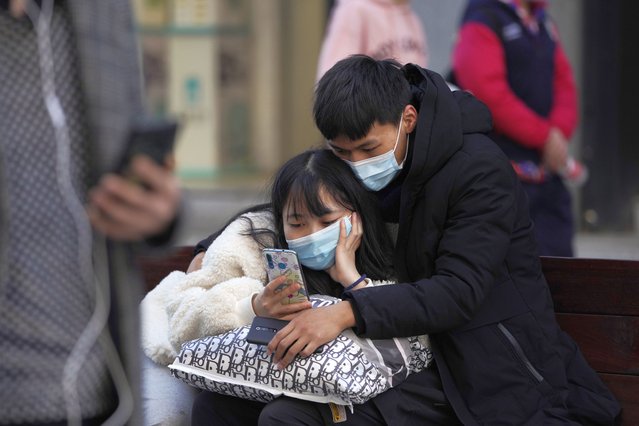 A man and woman wearing masks to help protect themselves from the coronavirus share a smartphone on the street in Wuhan in central China's Hubei province on Thursday, January 14, 2021. A global team of researchers for the World Health Organization arrived Thursday in the Chinese city where the coronavirus pandemic was first detected to conduct a politically sensitive investigation into its origins amid uncertainty about whether Beijing might try to prevent embarrassing discoveries. (Photo by Ng Han Guan/AP Photo) 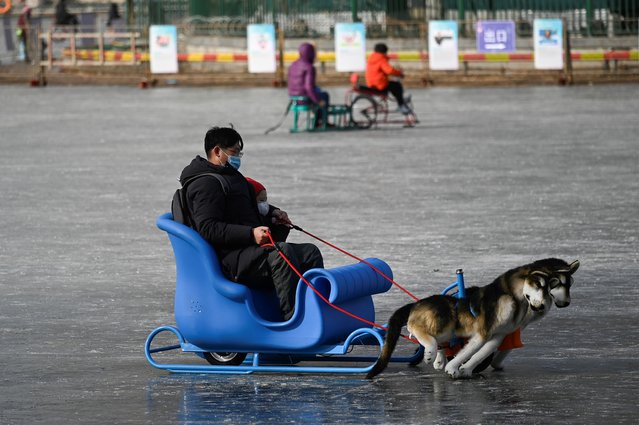 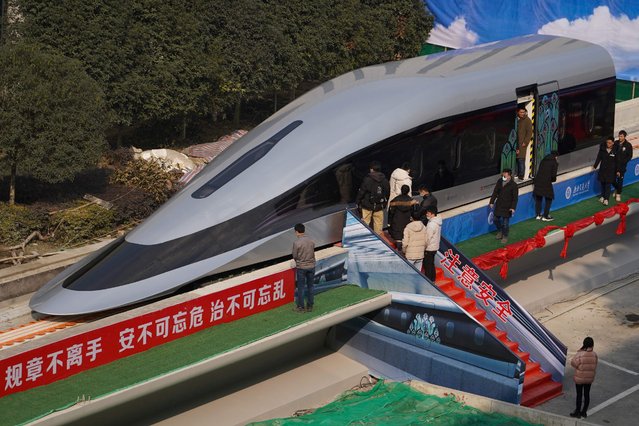 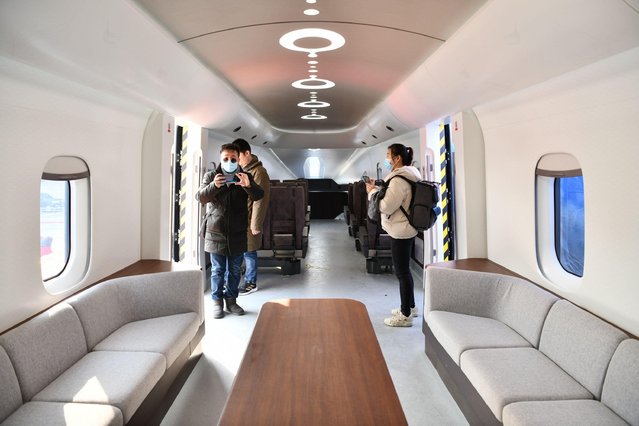 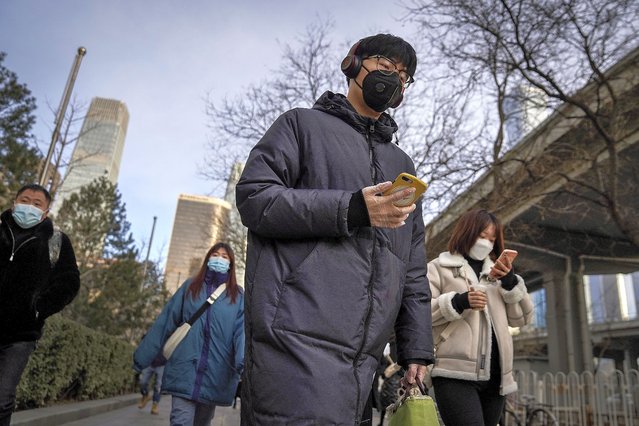 A man wearing a face mask and a disposable gloves to help curb the spread of the coronavirus heads to work with other masked people during the morning rush hour in Beijing, Monday, January 11, 2012. Chinese health authorities say scores more people have tested positive for coronavirus in Hebei province bordering on the capital Beijing. The outbreak focused on the Hebei cities of Shijiazhuang and Xingtai is one of China's most serious in recent months and comes amid measures to curb the further spread during next month's Lunar New Year holiday. (Photo by Andy Wong/AP Photo)

A woman wearing a face mask to help curb the spread of the coronavirus performs a morning exercise with a sword at a public park in Beijing, Tuesday, January 12, 2021. Lockdowns have been expanded and a major political conference postponed in a province next to Beijing that is the scene of China's most serious recent COVID-19 outbreak. (Photo by Andy Wong/AP Photo) A woman wearing a face mask to help curb the spread of the coronavirus takes a rest on the bench at the Forbidden City in Beijing, Sunday, January 10, 2021. More than 360 people have tested positive in a growing COVID-19 outbreak south of Beijing in neighboring Hebei province. (Photo by Andy Wong/AP Photo) 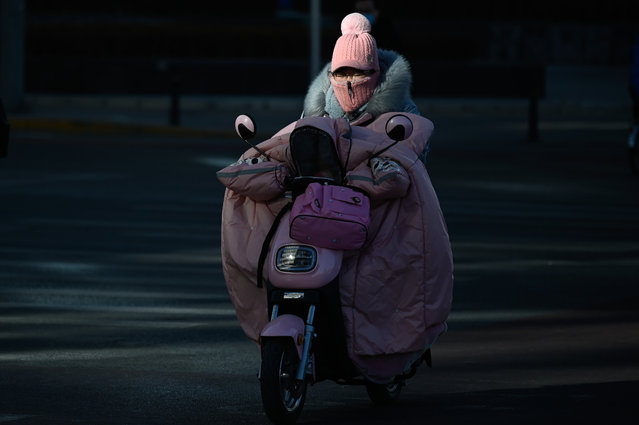