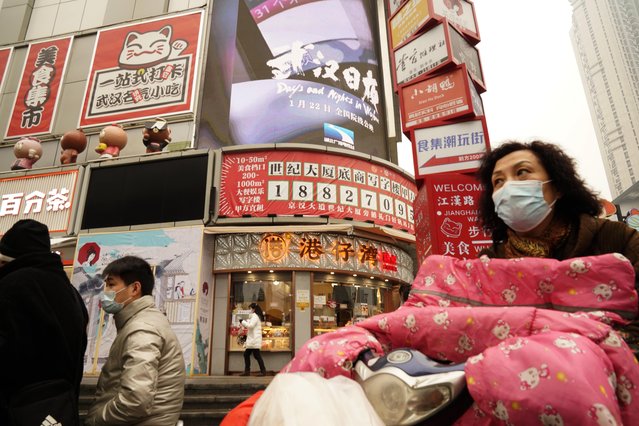 Residents wearing masks past by a screen showing a trailer for the film “Days and Nights in Wuhan” outside a mall in Wuhan in central China's Hubei province on Friday, January 22, 2021. China is rolling out the state-backed film praising Wuhan ahead of the anniversary of the 76-day lockdown in the central Chinese city where the coronavirus was first detected. (Photo by Ng Han Guan/AP Photo) 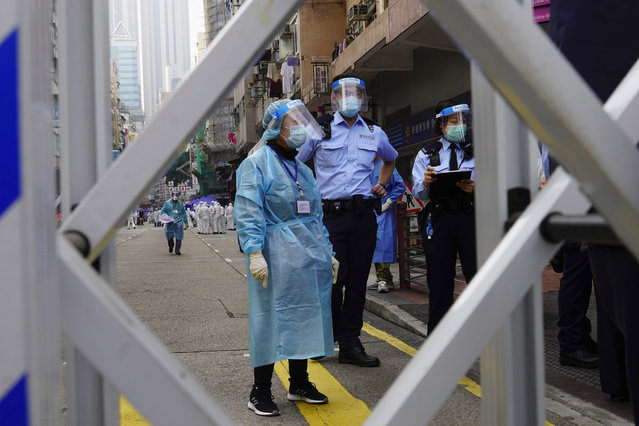 Police officers and health officials stand guard at the Yau Ma Tei area, in Hong Kong, Saturday, January 23, 2021. Thousands of Hong Kong residents were locked down Saturday in an unprecedented move to contain a worsening outbreak in the city, authorities said. (Photo by Vincent Yu/AP Photo) 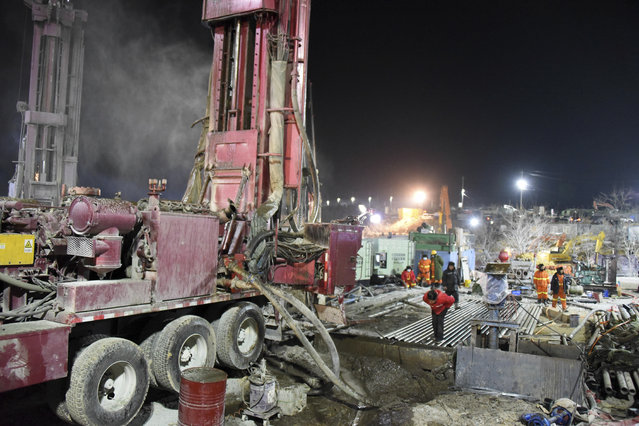 In this photo released by China's Xinhua News Agency, rescuers drill a new channel at the explosion site of a gold mine in Qixia City, east China's Shandong Province, Monday, January 18, 2021. Chinese state media say 12 out of 22 workers trapped for a week by an explosion in the gold mine are alive, as hundreds of rescuers seek to bring them to safety. (Photo by Wang Kai/Xinhua via AP Photo) 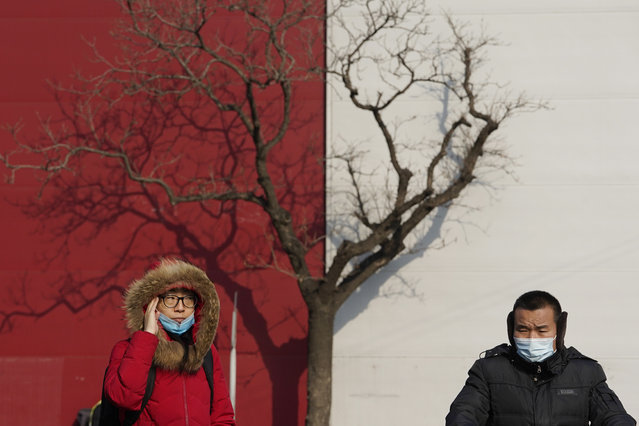 Residents wearing masks to protect from the coronavirus cross a junction in Beijing on Wednesday, January 20, 2021. (Photo by Ng Han Guan/AP Photo) 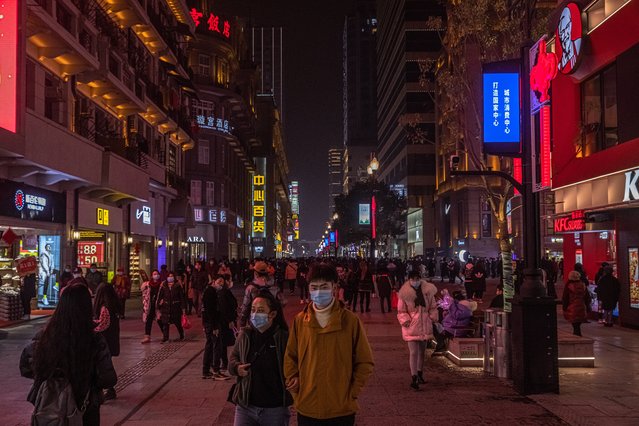 People wearing protective face masks walk in a commercial street, in Wuhan, China, 22 January 2021. The 23 January 2021 marks the one-year anniversary of the start of a strict 76-day lockdown of the Chinese city of Wuhan, where the coronavirus was first discovered before spreading across the world into a deadly global Covid-19 pandemic. (Photo by Roman Pilipey/EPA/EFE) 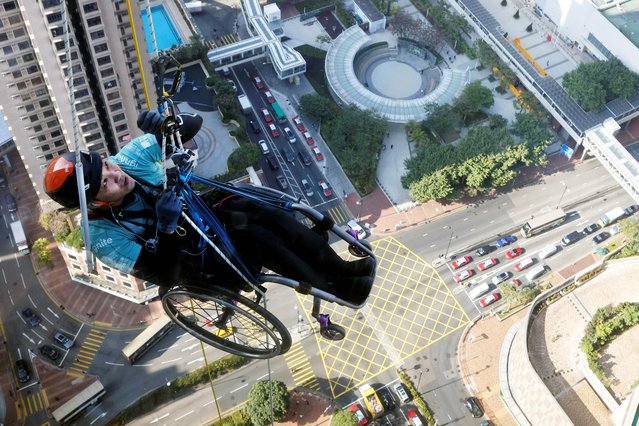 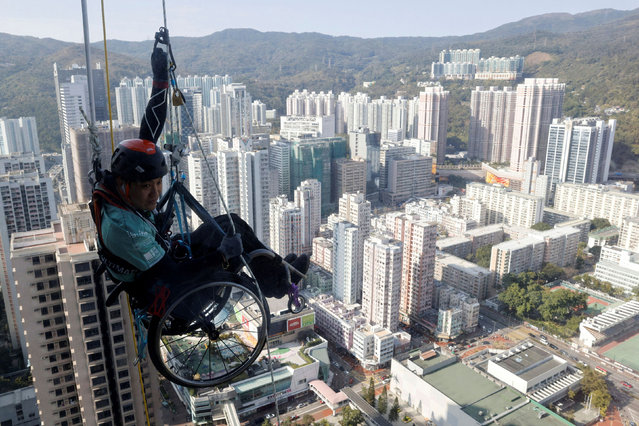 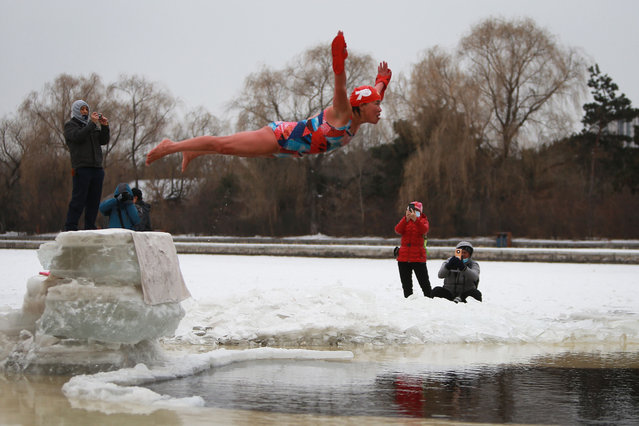 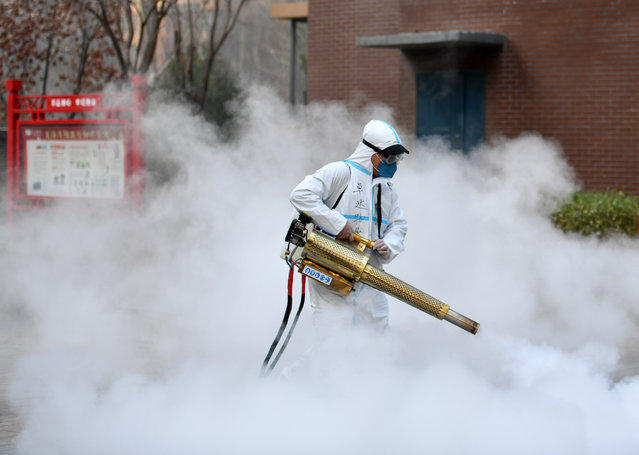 A worker disinfects a residential community on January 20, 2021 in Shijiazhuang, Hebei Province of China. (Photo by Zhai Yujia/China News Service via Getty Images) 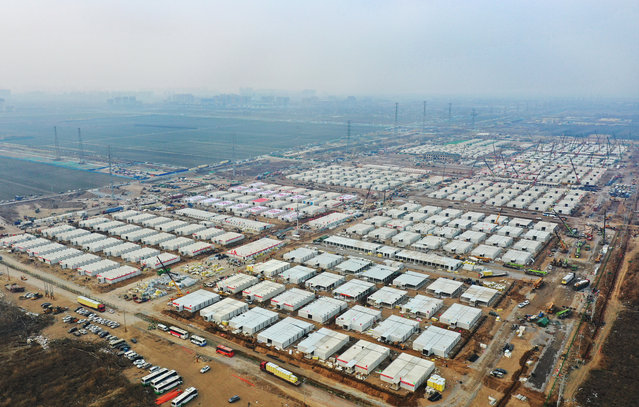 In this aerial photo released by China's Xinhua News Agency, construction workers build a quarantine center which, according to state media, will have over 4,000 rooms to isolate close contacts of COVID-19 cases in Shijiazhuang in northern China's Hebei Province, Wednesday, January 20, 2021. China is imposing some of its toughest travel restrictions yet as coronavirus cases surge in several northern provinces ahead of the Lunar New Year. (Photo by Yang Shiyao/Xinhua via AP Photo) 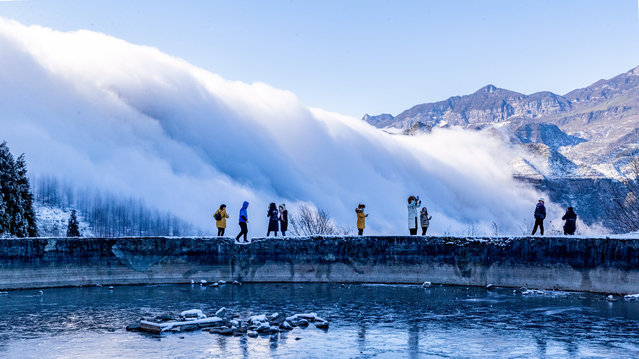 Tourists watch as clouds drift over the Jinfo (Golden Buddha) Mountain after a snowfall on January 18, 2021 in Chongqing, China. (Photo by Qu Mingbin/VCG via Getty Images) 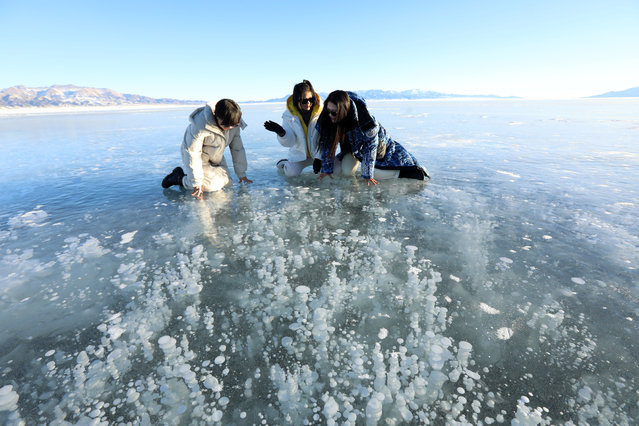 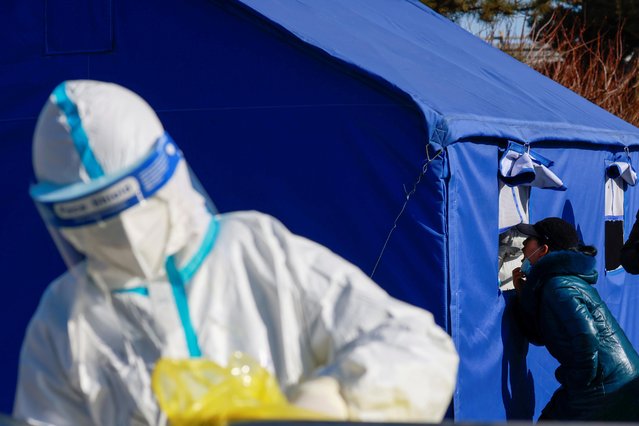 A woman is tested at a nucleic acid testing site following an outbreak of the coronavirus disease (COVID-19) in Beijing, China, January 18, 2021. (Photo by Thomas Peter/Reuters) 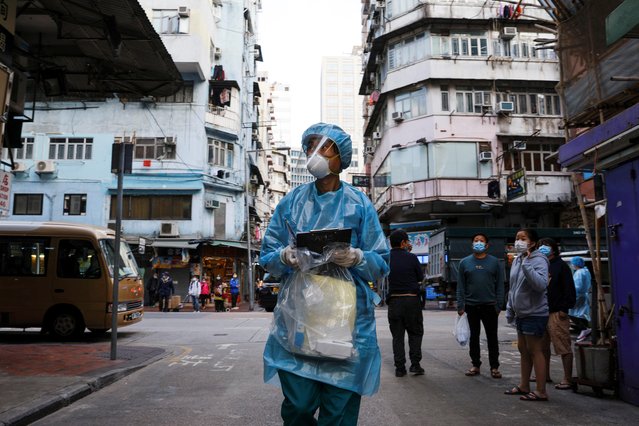 A medical worker in a protective suit walks near the residential area at Jordan, after the expand of mandatory coronavirus disease (COVID-19) testing, in Hong Kong, China on January 19, 2021. (Photo by Tyrone Siu/Reuters) 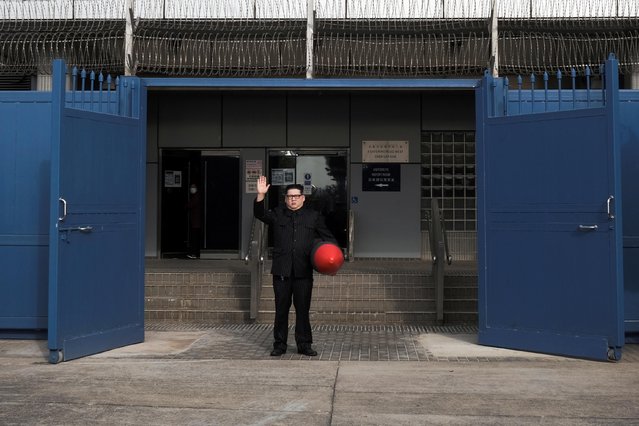 Howard X, an Australian-Chinese impersonating North Korean leader Kim Jong-un gestures as he stands with his inflatable rocket to report for his bail, outside the police station in Hong Kong, China on January 20, 2021. (Photo by Tyrone Siu/Reuters) 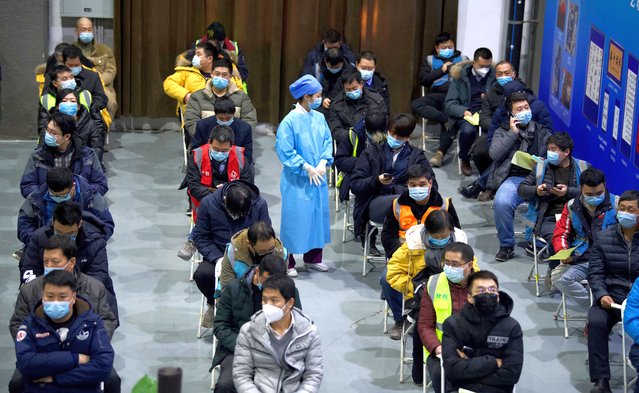 People wait on chairs after being inoculated with a Covid-19 vaccine at the Chaoyang Museum of Urban Planning in Beijing on January 15, 2021. (Photo by Noel Celis/AFP Photo) 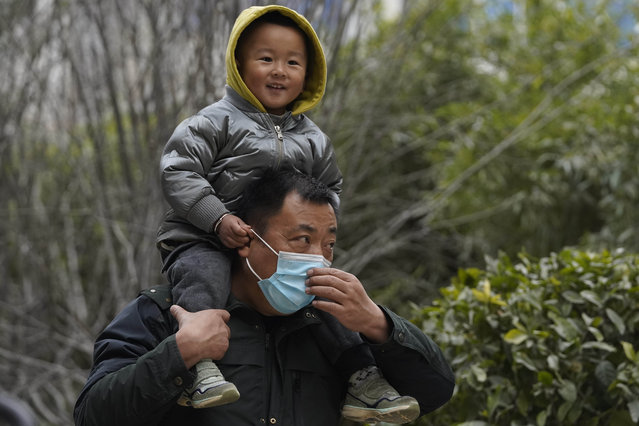 A child holds on to the ears of a masked man as she sits on his shoulders on a street of Wuhan in central China's Hubei province, Saturday, January 16, 2021. (Photo by Ng Han Guan/AP Photo) 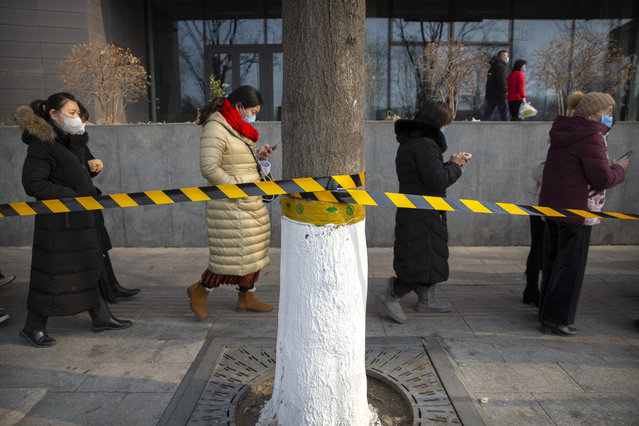 People wearing face masks to protect against the spread of the coronavirus line up for mass COVID-19 testing in a central district of Beijing, Friday, January 22, 2021. Beijing has ordered fresh rounds of coronavirus testing for about 2 million people in the downtown area following new cases in the Chinese capital. (Photo by Mark Schiefelbein/AP Photo) 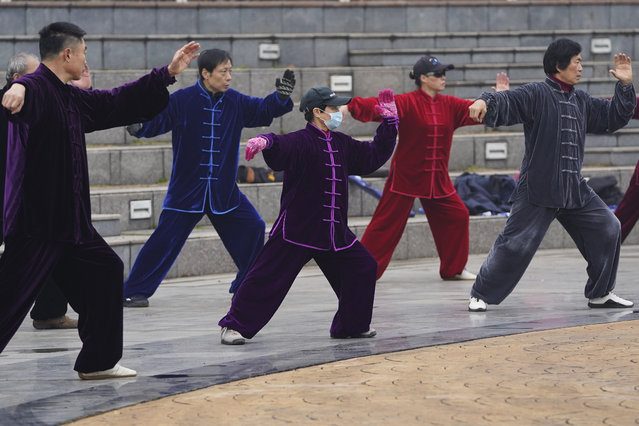 Residents practice Taiji at a park in Wuhan in central China's Hubei Province on Saturday, January 23, 2021. A year after it was locked down to contain the spread of coronavirus, the central Chinese city of Wuhan has largely returned to normal, even as China continues to battle outbreaks elsewhere in the country. (Photo by Ng Han Guan/AP Photo) 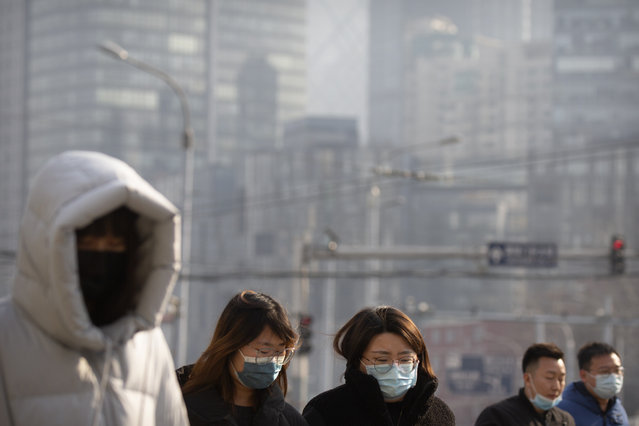 People wearing face masks to protect against the spread of the coronavirus walk across an intersection in Beijing, Wednesday, January 20, 2021. China is now dealing with coronavirus outbreaks across its frigid northeast, prompting additional lockdowns and travel bans. (Photo by Mark Schiefelbein/AP Photo) 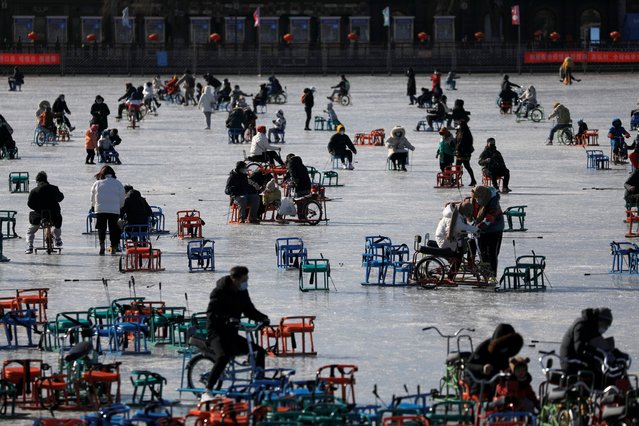