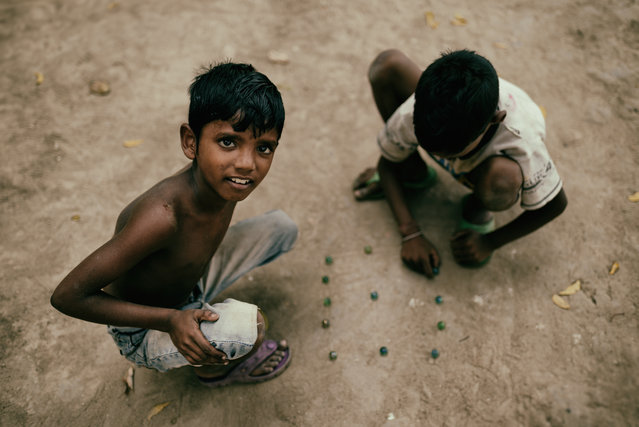 “It’s a game we rarely see these days, especially in the west. These two boys were playing marbles in a back street of Kolkata, near the Howrah bridge – and at least one of them was more interested in the game than the man with the camera”. (Photo by Hamish Scott-Brown/The Guardian) 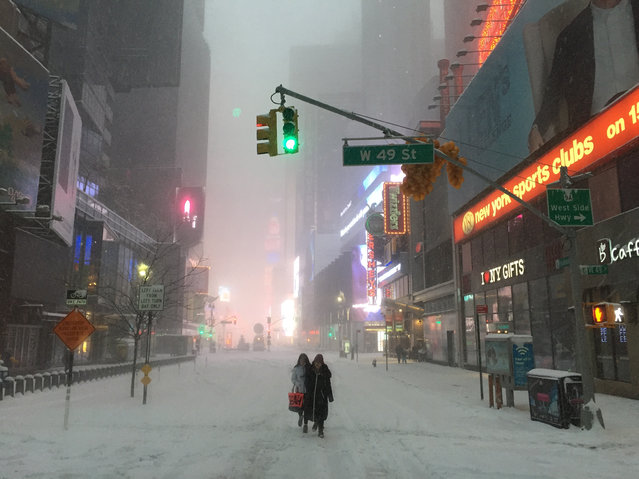 “Times Square under the grip of Storm Jonas. During the storm, all travel systems were suspended, leaving the iconic square to the intrepid pedestrians”. (Photo by Phil Darling/The Guardian) 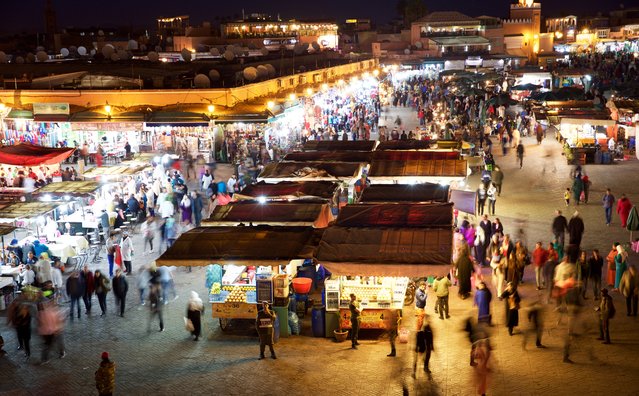 “The hustle and bustle of the famous Jemaa el-Fnaa in Marrakech, seen from a cafe rooftop”. (Photo by Roslin Zuha/The Guardian) 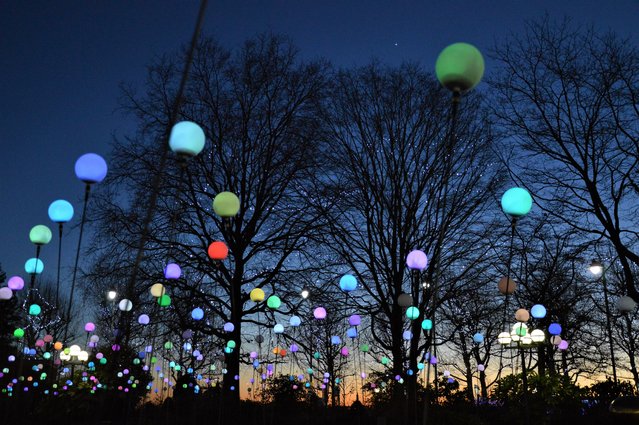 “The dark of winter is depressing, especially in January, after the Christmas lights are gone. The Canary Wharf Winter Lights exhibition brings some welcome light and brightens up dark London days for a brief period”. (Photo by Laureen Katiyo/The Guardian) 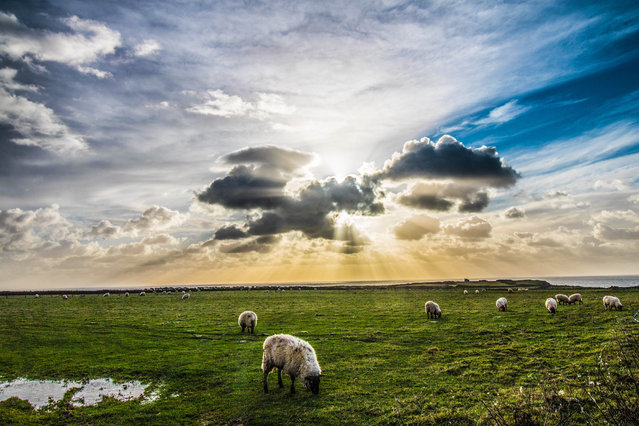 “After an afternoon of hiking and exploring the caves of Rhossili Bay, West Glamorgan, we caught the sun breaking through the clouds”. (Photo by Megan Warren-Davis/The Guardian) 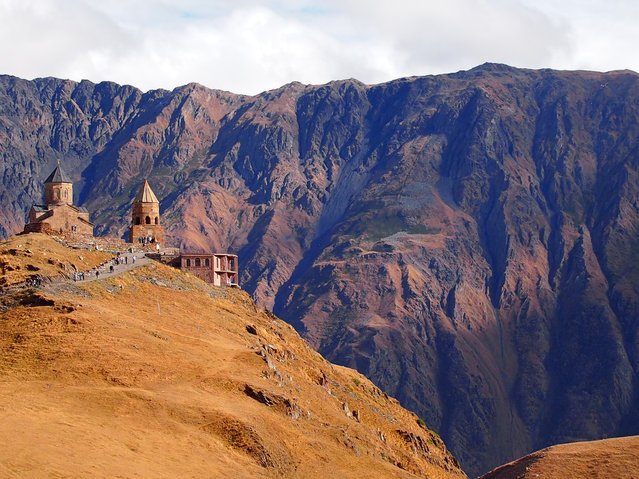 “We were amazed by the view from the Gergeti Trinity church in Georgia. This 14th-century church is at an elevation of 2,170 metres and it’s a three-hour climb to reach it. The view is outstanding and in a good weather you can see the famous Mount Kazbegi, one of the highest summits in Caucasus mountains”. (Photo by Iryna Tuchapska/The Guardian) 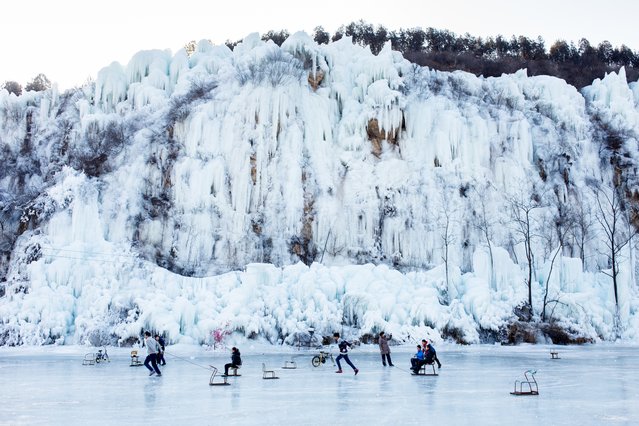 “Among the skyscrapers and hutongs of Beijing, it seems incongruous that nature could be such a powerful force. But in the Yungang Xinjiang suburb I stumbled across these children playing on a frozen lake”. PAUL GOLDSTEIN, JUDGE: “The telegraph wires are a distraction, as is the washed out sky, but I applaud the photographer for not cooking this image with dubious processing. These criticisms are minor. I not only like the energy and beauty of the backdrop, I want to be on one of those sledges. Apart from a little crossover on the left, these people could not be better positioned”. (Photo by Billy Bolton/The Guardian) 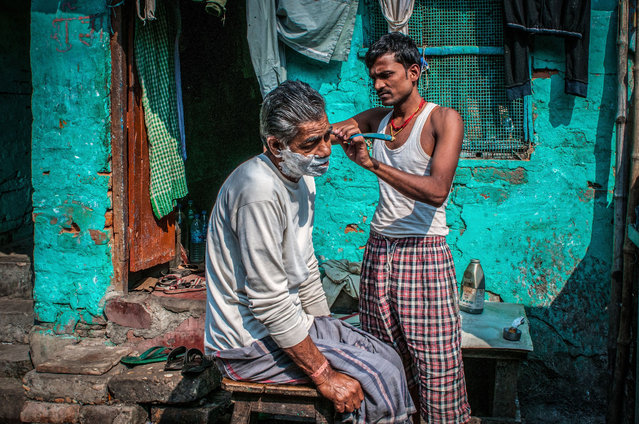 “Wandering round the Potter’s Town area of Kolkata, I was fascinated by all the activities taking place in the side streets. The brightly coloured walls were the perfect backdrop to this outdoor shave”. PAUL GOLDSTEIN, JUDGE: “I thought I was immune to these sort of candid sub-continent images – clearly not when done this well. It is neither intrusive nor cliched but is not arrived at by accident. The gorgeous colours cover most of the blue through turquoise Pantone chart. However, it is the utter indifference on the expressions that caps it for me”. (Photo by Louise Waldron/The Guardian) 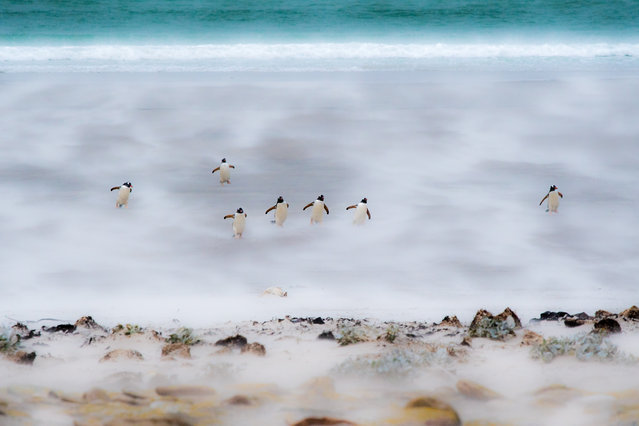 Winner. “Despite the temptation to seek shelter myself, I took this photo of a small group of gentoo (penguins) on Saunders Island in the Falklands as they struggled against the wind and driving sand to return to their rookery”. PAUL GOLDSTEIN, JUDGE: “A clear winner. Initially I thought this was a study in slow shutter speed, but then saw that these gentoos are almost floating across this Falklands beach in a sandstorm. I would have cropped the whole foreground as it adds little, but that’s a minor criticism. I’ve been to this beach and never got close to this sort of masterpiece”. (Photo by John Birch/The Guardian)
Edit Del
05 Feb 2017 01:05:00, post received 0 comments
Publication archive:
←   →
Popular tags:
All tags
Last searches: