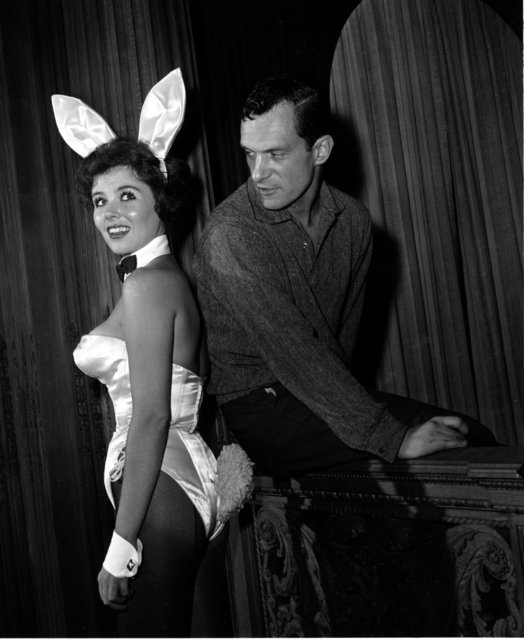 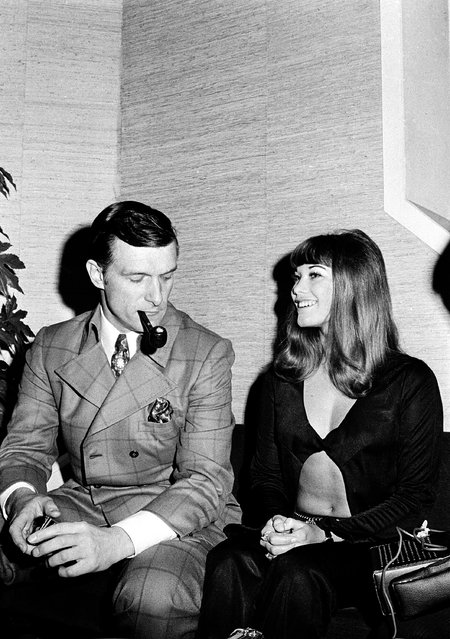 Hugh Hefner, publisher and owner of Playboy Magazine, and his girlfriend Barbara Benton, 19-year-old actress, are pictured at the Foreign Press Association in Rome, Italy, on August 6, 1969. (Photo by AP Photo) 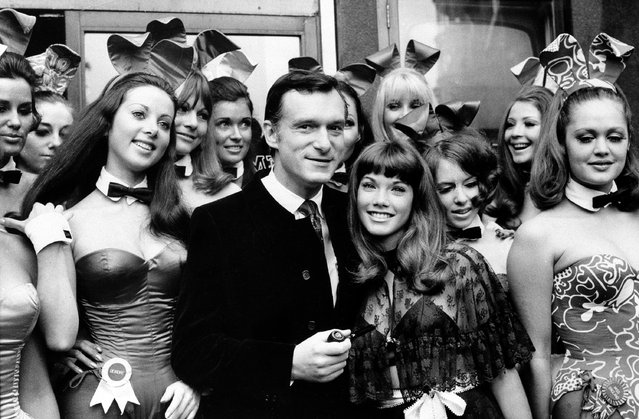 Hugh Hefner, publisher and owner of Playboy Magazine, and his girlfriend Barbara Benton, 19-year-old coed turned actress, are surrounded by Bunny Girls at the Playboy Club in London, on September 5, 1969. (Photo by AP Photo) 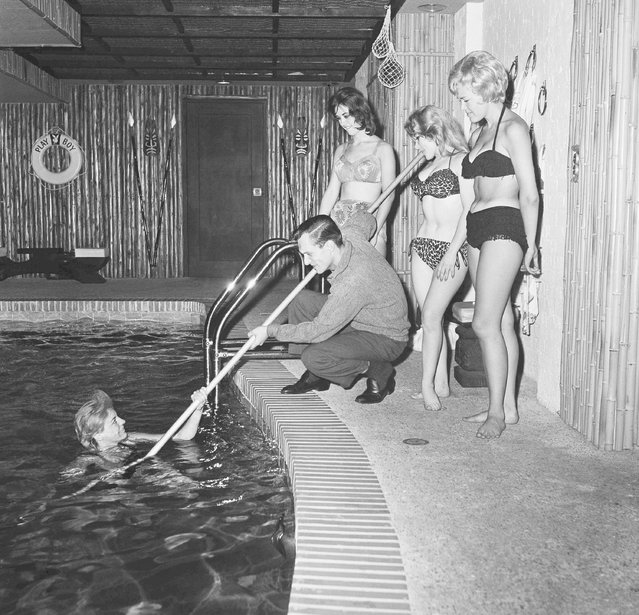 Playing at having fun, Hugh Hefner, center, rescues one of the swimmers in the indoor pool of his $400,000 apartment, June 20, 1961, Chicago, Ill. The wealthy young publisher doesnt do much swimming in the pool himself. Surrounded by everything for a playboys dream life, Hefner doesnt fit into the image his magazine has created. The women are unidentified. (Photo by Edward Kitch/AP Photo) 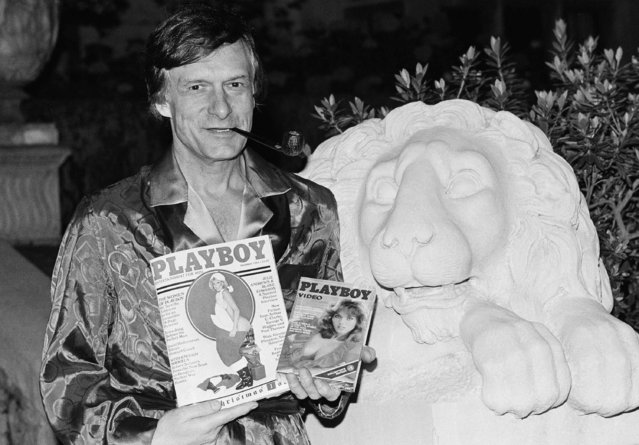 Playboy magazine publisher Hugh Hefner holds a copy of the magazine and a video cassette from the Playboy Channel, an all-night cable television venture Playboy Enterprises has undertaken, during an interview at the Playboy mansion in the Holmby Hills, November 29, 1982, Los Angeles, Calif. (Photo by Nick Ut/AP Photo) 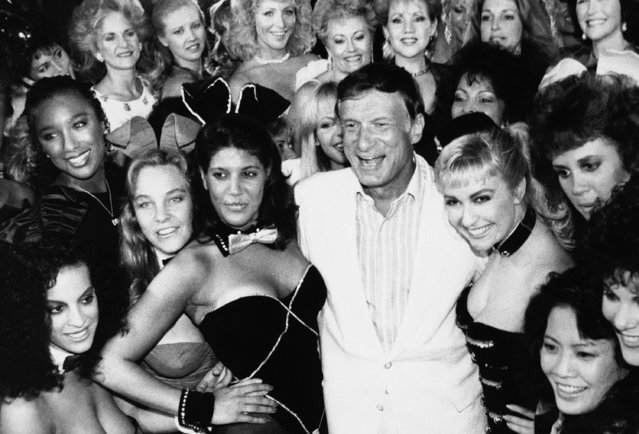 Hugh Hefner, center, poses with a group of current and former Playboy bunnies at the Playboy Club, Tuesday, June 25, 1986, Los Angeles, Calif. The famed clubs owned by the Playboy Corporation will be closing their doors on Monday, June 30. A few franchised clubs in the U.S. and abroad will remain open. The bunnies are unidentified. (Photo by AP Photo) 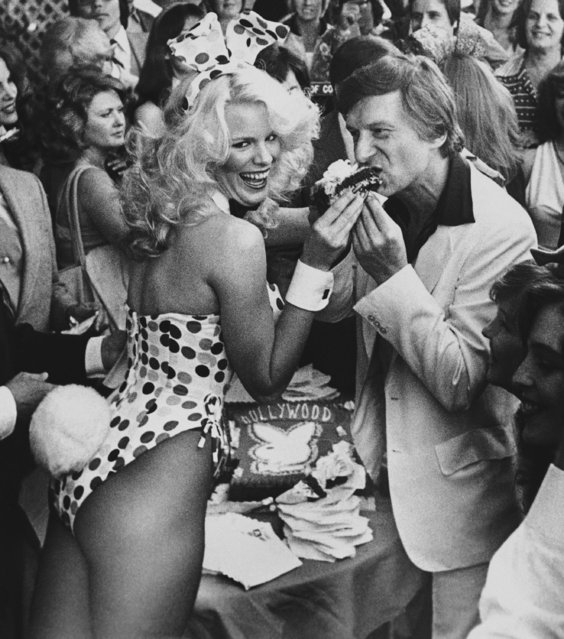 Bunny Betsy, left, feeds Hugh Hefner, right, a piece of congratulatory cake after he was awarded the 1,716th star in the Hollywood walk of fame, Wednesday, April 9, 1980, Los Angeles, Calif. Hefner, chairman of the board, Playboy Enterprises Inc. started Playboy Magazine in 1953 with an investment of $600. (Photo by AP Photo/Loundy) 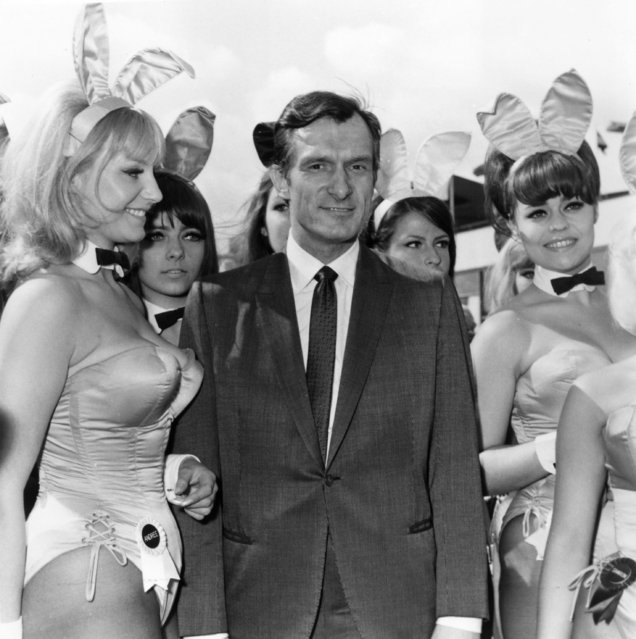 Playboy editor and tycoon Hugh Hefner is greeted by a group of bunny girls from his Playboy Clubs, upon his arrival at London Airport, 1966. (Photo by Dove/Getty Images) 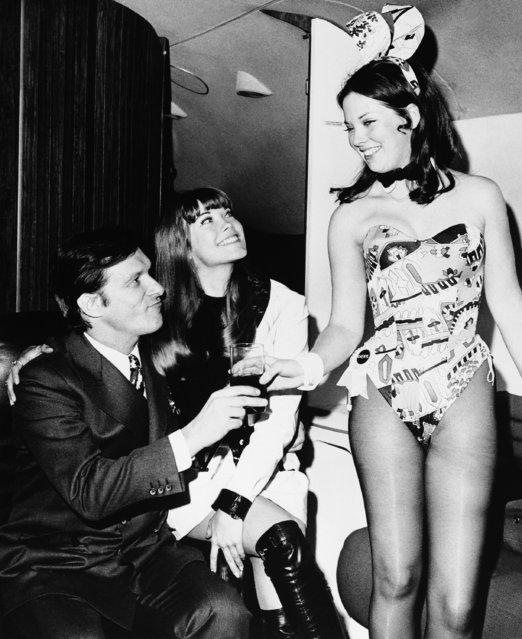 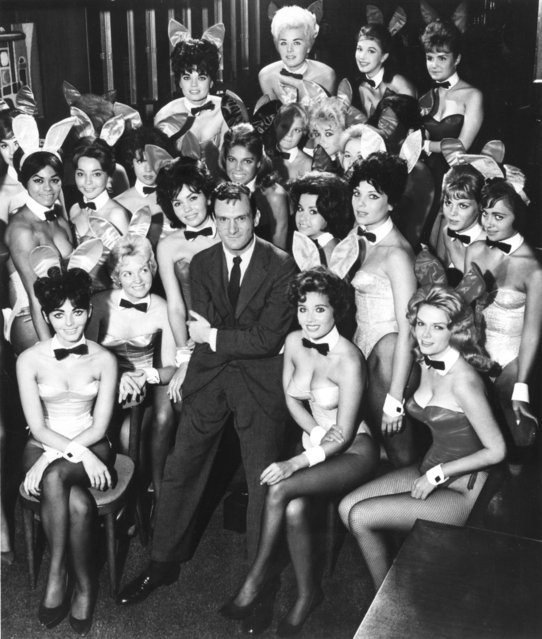 Millionaire publisher of Playboy magazine Hugh Hefner poses with a bevy of bunny girls at one of America's chain of Playboy clubs. (Photo by Helmut Kretz/Getty Images) 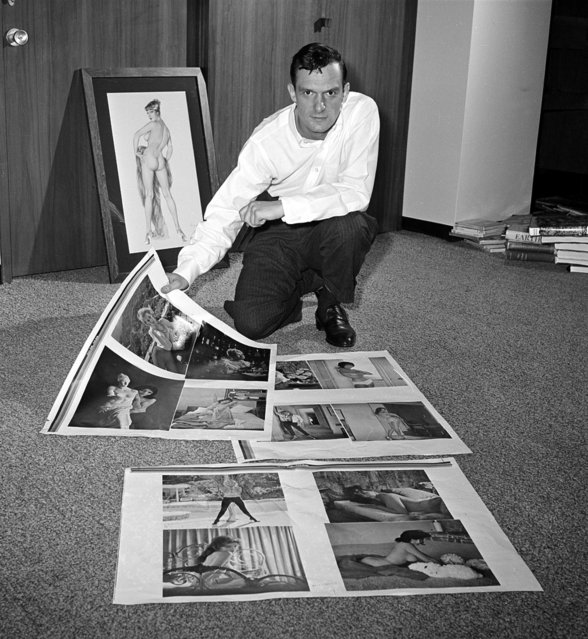 Publisher Hugh Hefner looks over proof sheets for his magazine Playboy, in Chicago, Ill., on June 20, 1961. Circulation of his glamor magazine has grown to 1, 200 00 copies since he started publication in 1953. (Photo by AP Photo) 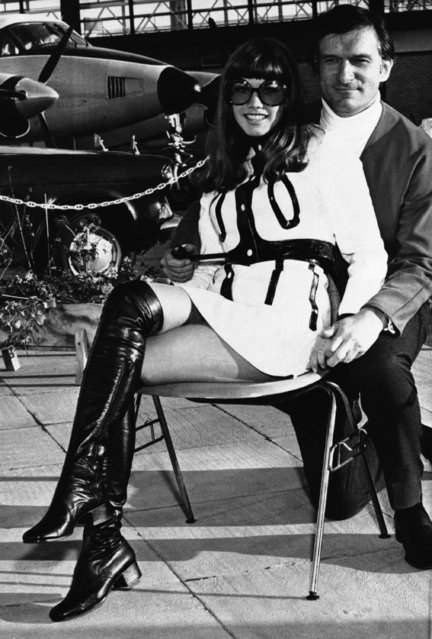 Playboy boss Hugh Hefner, right, and Miss Barbi Benton are pictured on their arrival at Gatwick Airport from Copenhagen, Sept. 3, 1969, London, England. Hefner is here for an indefinite period. (Photo by AP Photo) 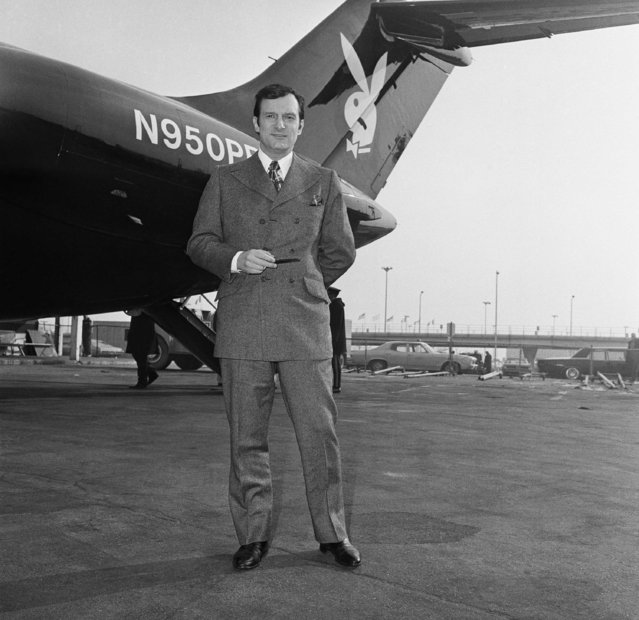 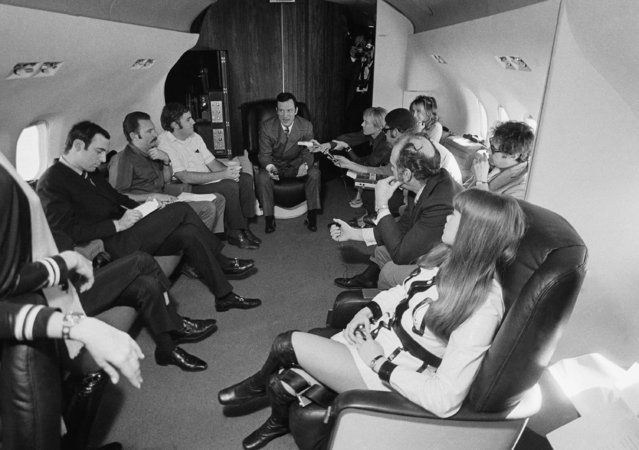 Playboy publisher Hugh Hefner, back center, sits on his DC-9 jetliner during a press conference after it landed, March 17, 1970, Los Angeles, Calif. Hefners companion, Barbi Benton is at right. The rest of the group is unidentified. (Photo by George Brich/AP Photo) 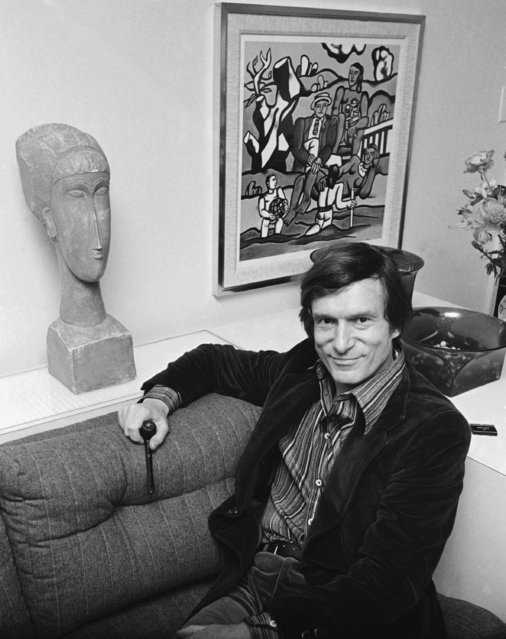 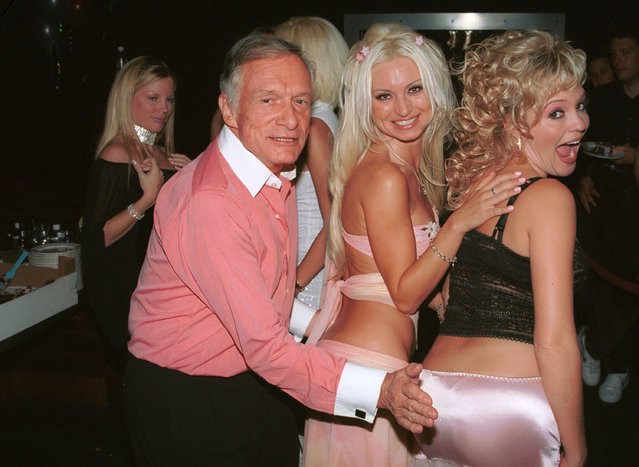 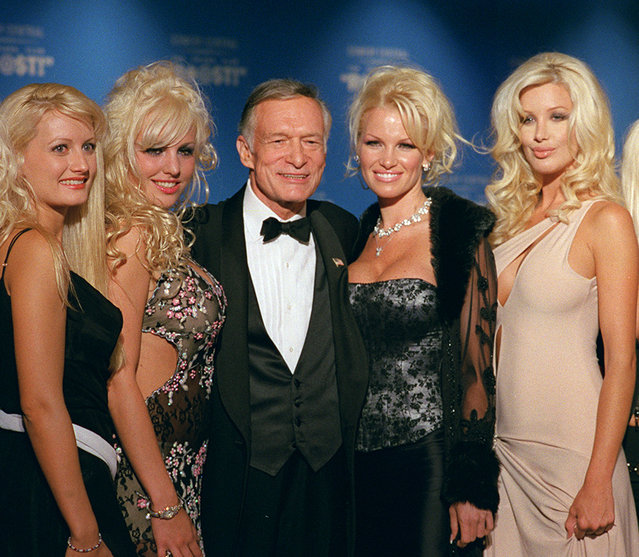 Hugh Hefner, 75, center, poses with four of his girlfriends before the start of The New York Friars Club Roast in New York, September 29, 2001. The New York Friars, a members-only group of entertainers who've poked fun at each other at formal dinners for nearly a century, turned their barbs on the Playboy magazine founder, who was an easy target for his libido and his luxurious lifestyle. A severely edited version of the star-studded, black-tie event is scheduled to air at 10 p.m. EST Sunday on Comedy Central. (Photo by Jim Cooper/AP Photo) 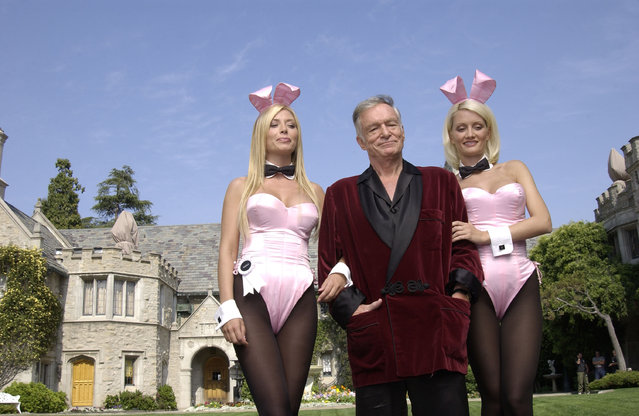 (L to R) Playboy bunny Sheila Levell, Playboy founder Hugh Hefner and Playboy bunny Holly Madison perform a scene during the filming of a commercial for "X Games IX" at the Playboy Mansion May 6, 2003 in Holmby Hills, California. This year's X Games will take place at STAPLES Center in Los Angeles from August 14th through 18th. (Photo by Robert Mora/Getty Images) 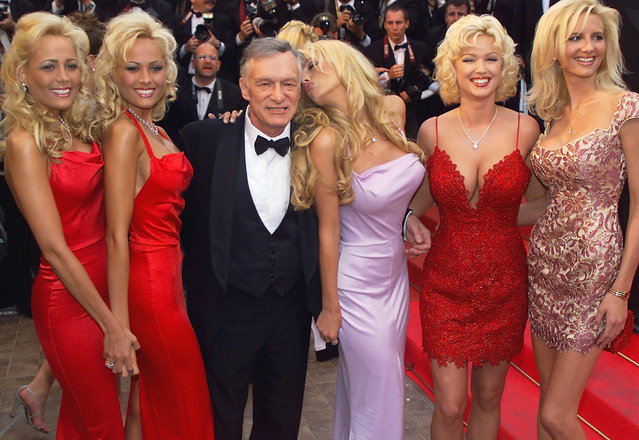 Playboy magazine president Hugh Hefner (C) poses with playmates 14 May 1999 on the steps of the Palais des Festivals before the screening of their movie “Entrapment” in selection for the 52nd Cannes Film Festival. (Photo by Pascal Guyot/AFP Photo) 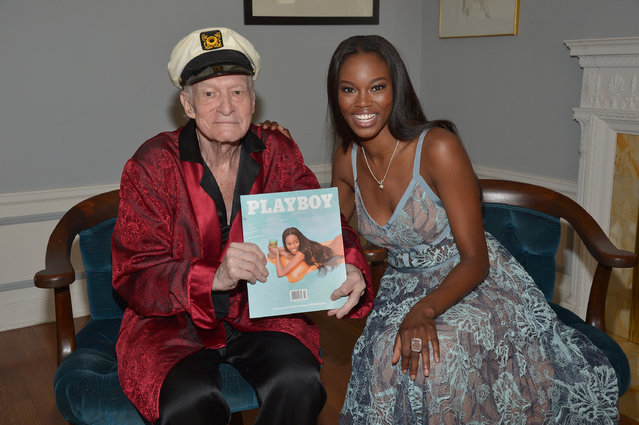 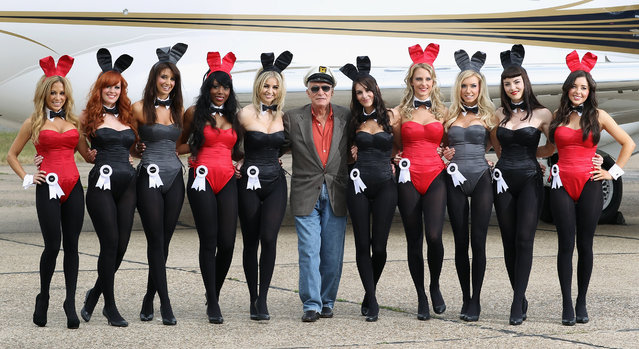 Playboy founder Hugh Hefner (centre) arrives at Stansted Airport on June 2, 2011 in Stansted, England. The photograph is a recreation of a picture originally taken in the 1960's, with ten of the new London Bunnies. Mr Hefner is back in the UK to mark the launch of the new Playboy Club in Mayfair, which opens on June 4. The clubs opening will welcome back the iconic Playboy Bunny to Londonafter a 30 year absence. Famous Bunnies have included Debbie Harry and Lauren Hutton. (Photo by Dan Kitwood/Getty Images) 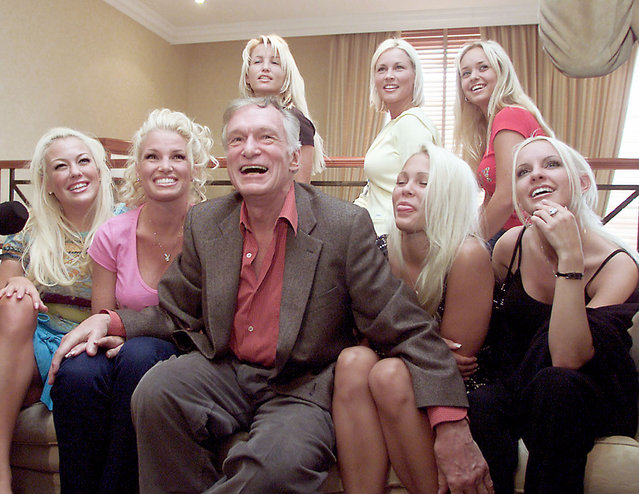 Hugh Hefner laughs as he for poses pictures with his seven girlfriends (L to R) Tiffany, Tina, Michelle, Dalene, Stephanie, Kimberley and Regina, May 2001. (Photo by Russell Boyce/Reuters) 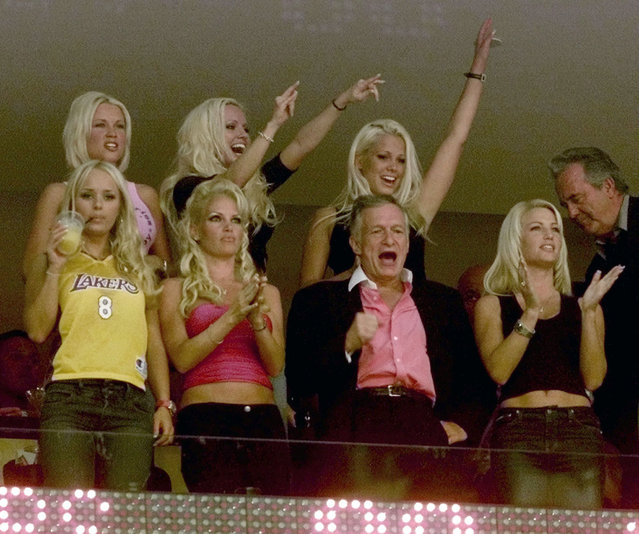 Hugh Hefner and several Playmates cheer during the NBA Finals between the Philadelphia 76ers and Los Angeles, June 2001. (Photo by Mike Blake/Reuters) 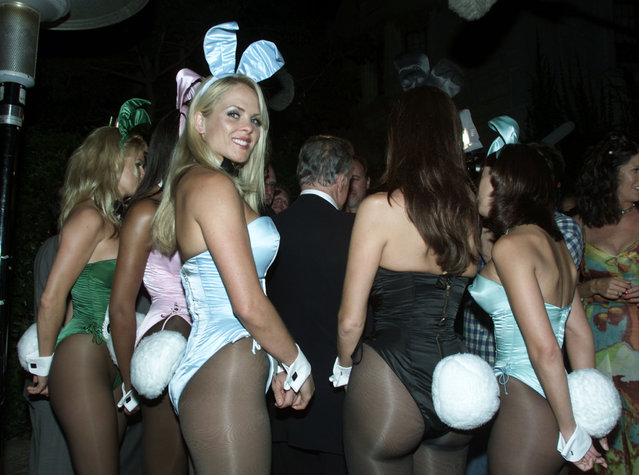 Hugh Hefner surrounded by Playboy Bunnies as he is interviewed by television crews, August 2000. (Photo by Fred Prouser/Reuters) 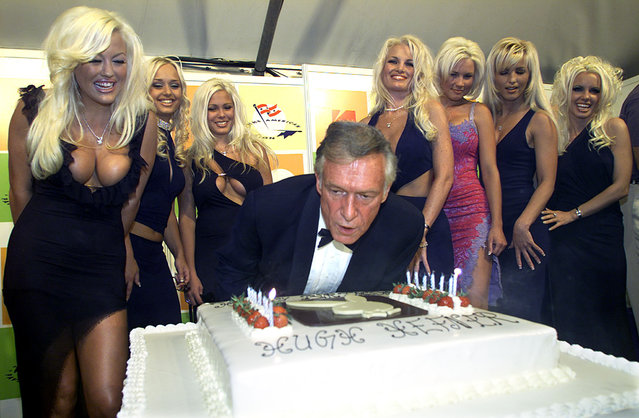 Hugh Hefner leans over a giant birthday cake as he blows out candles to celebrate his 75th birthday, 2001. (Photo by Reuters/Stringer .) 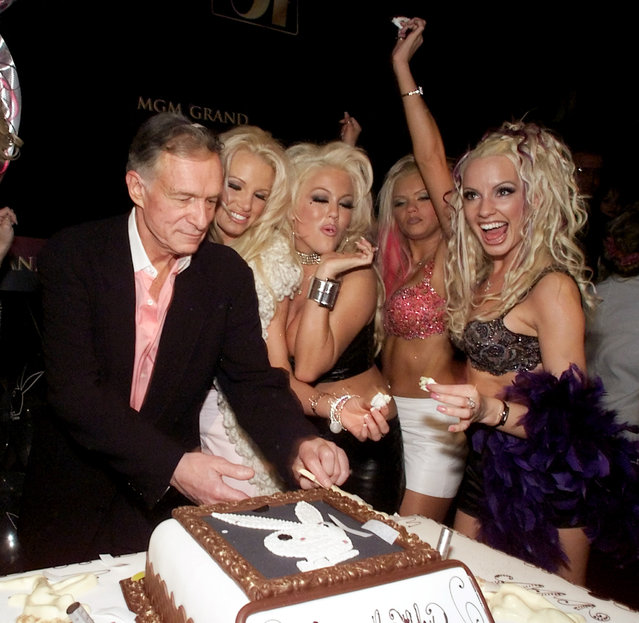 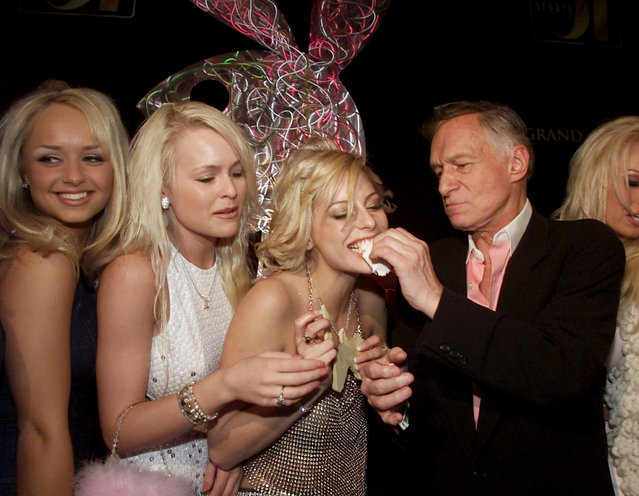 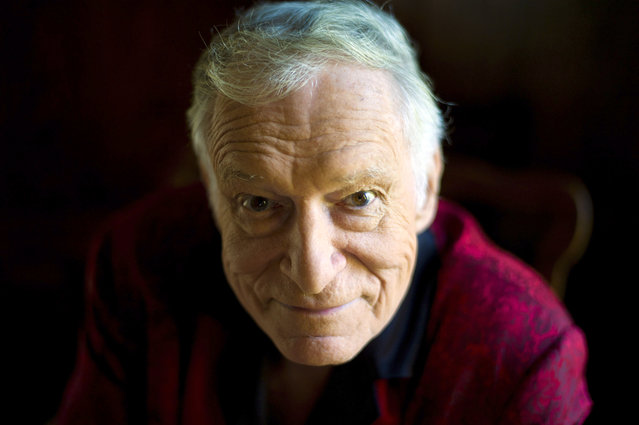