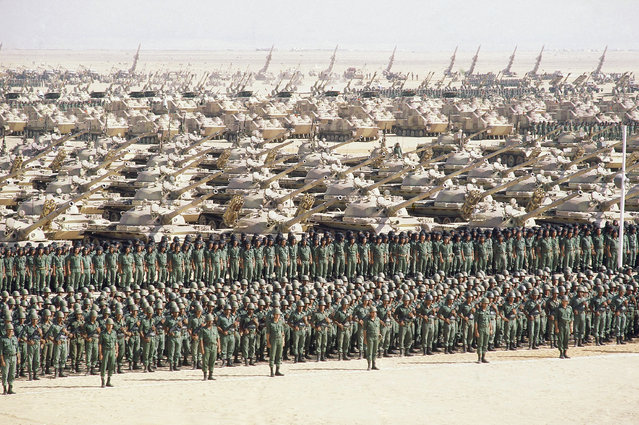 Egyptian military parade to celebrate the 5th anniversary of the October 1973 war with Israel, October 6, 1978. (Photo by Bill Foley/AP Photo) 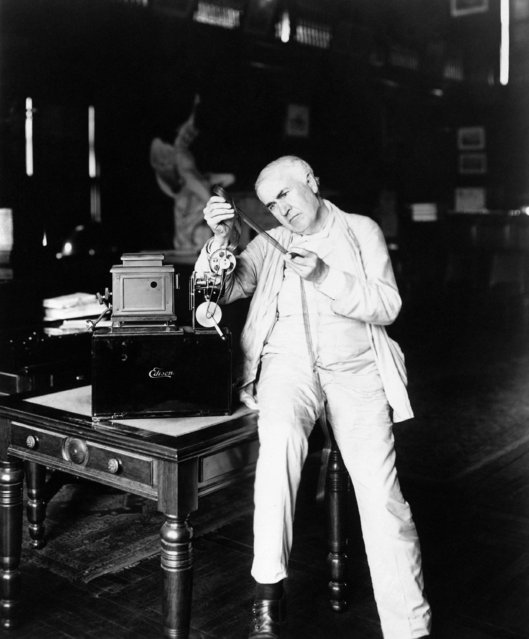 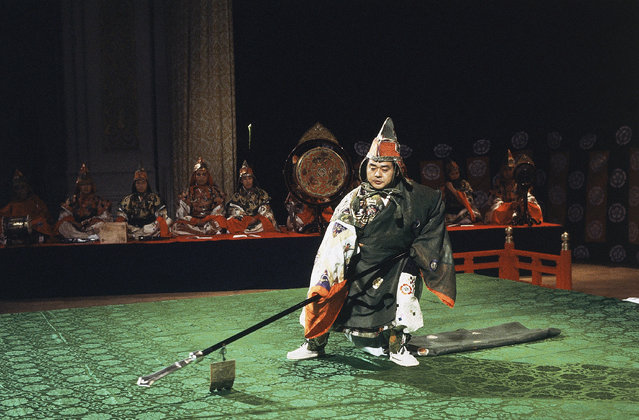 Wielding polearms, a dancer advances in the role of a fierce warriors during dress rehearsal of the Osaka Garyo-Kai Company at New York's Carnegie Hall, October 6, 1978. The company wears the ornate priceless costumes of Bugaku, the ceremonial dance tradition of the Japanese Imperial household. They were preparing for a performance that evening, which would be the first performance of Bugaku in New York in 18 years. (Photo by Richard Drew/AP Photo) 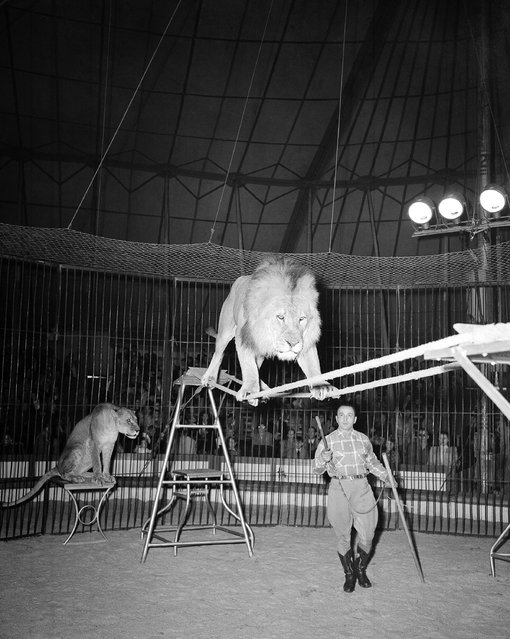 Prince, six-year-old star of Michel Van Been's lion group, performs a balancing act on two ropes under the watchful eye of his French trainer in Frankfurt, Germany, October 6, 1950. Van Been's lions are one of the main attractions of the German circus Franz "Tuffi" Althoff. (Photo by Hanns J. Jaeger/AP Photo) 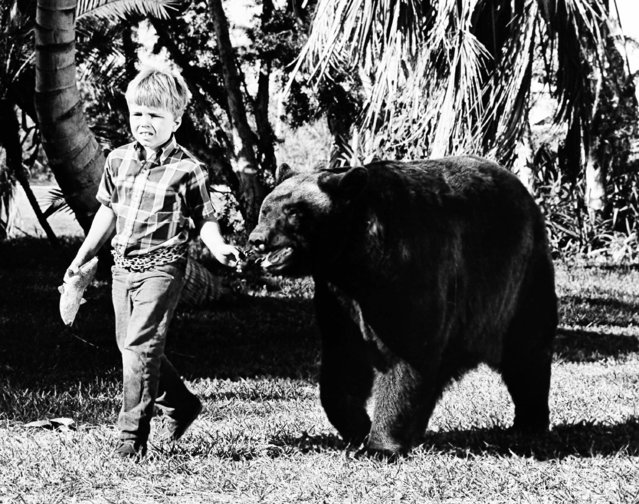 Client Howard playing the son of an Everglades game warden, leads his pet bear Ben, into another adventure of "Gentle Ben" October 6, 1967. (Photo by AP Photo) 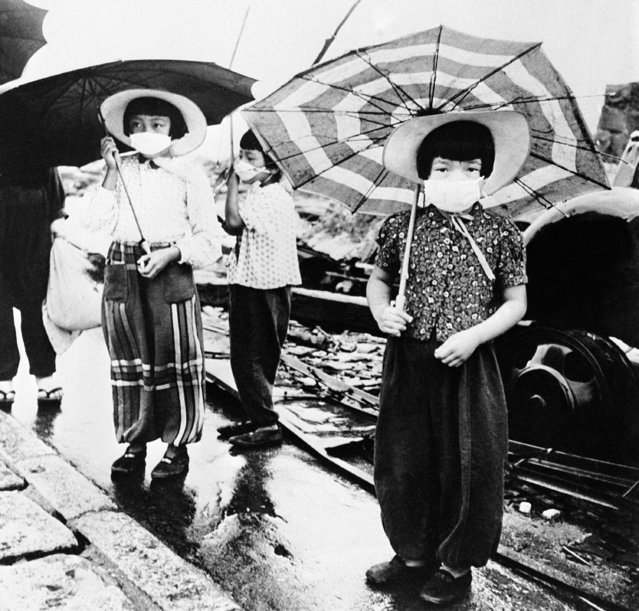 The Japanese of atom-bombed Hiroshima have put the ancient custom of wearing nose and mouth masks while out of doors to a good use. Hiroshima was the first town to be hit by an atom bomb during the war. Japanese girls wearing their masks as they walk through the devestated streets of Hiroshima, Japan, on October 6, 1945. (Photo by AP Photo) 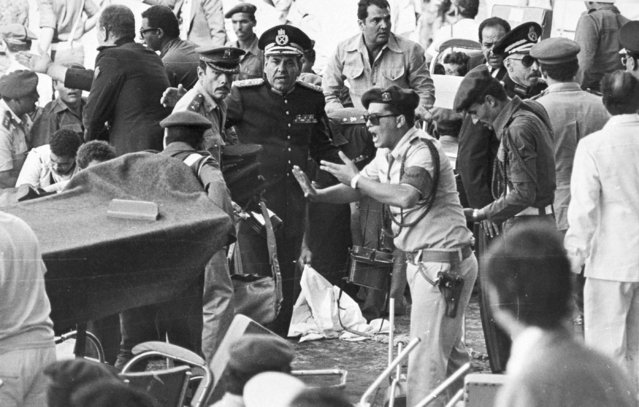 An Egyptian security guard screams at people as medics bring in a stretcher to carry the wounded after the attack which killed President Anwar Sadat, October 6, 1981, as he watched a military parade. (Photo by AP Photo) 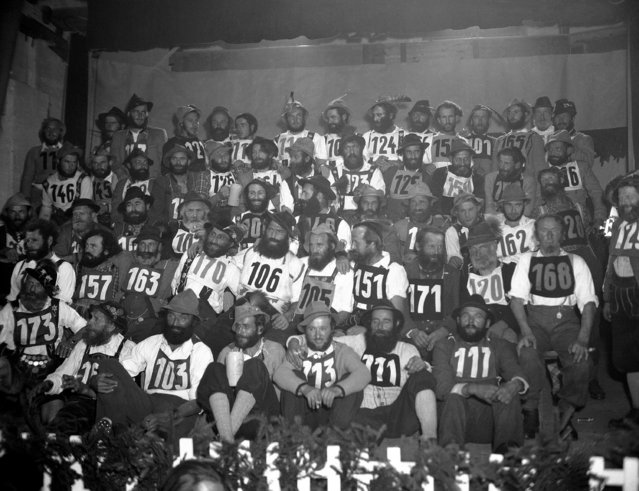 Proud of the beards they grew while working on ranches high up in the Alps during the summer months, these Bavarian cowboys entered a beard contest at Immenstadt in southern Germany, October 6, 1952. The 73 entries varied in age from 20 to 70 years old. The contest was the highlight of the annual rodeo at Immenstadt. (Photo by Heinrich Sanden/AP Photo) 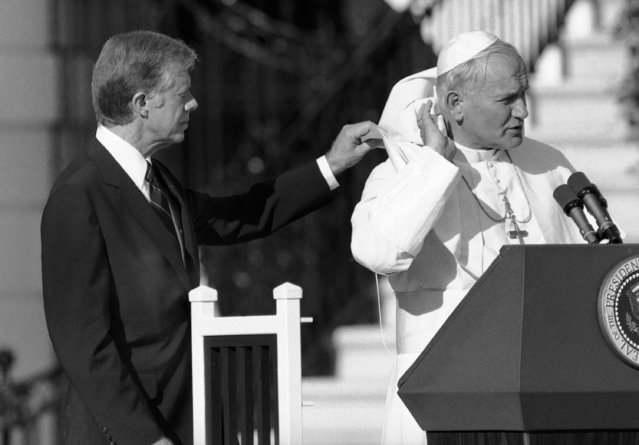 U.S. President Jimmy Carter gives Pope John Paul II a hand with his cape, blown up by a breeze during ceremonies on the South Lawn of the White House in Washington, Saturday, October 6, 1979. (Photo by AP Photo) The Girl Defense Workers, Employees of the RCA Manufacturing Company, raise their arms in the sign of "V", the symbol for victory, during a calisthenics drill, October 6, 1941 in Camden to demonstrate how defense workers can keep fit. (Photo by AP Photo) 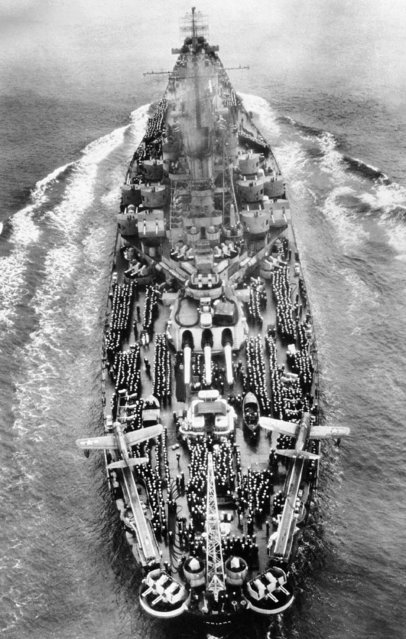 The U.S.S. Indiana is seen with sailors lining her deck as she enters San Francisco bay passing under the Golden Gate Bridge on October 6, 1945. The ship was carrying 879 Navy and Marine personnel as passengers and was the first of the warships to return from the Pacific area. (Photo by AP Photo)
Edit Del
07 Oct 2015 08:07:00, post received 0 comments
Publication archive:
←   →
Popular tags:
All tags
Last searches: