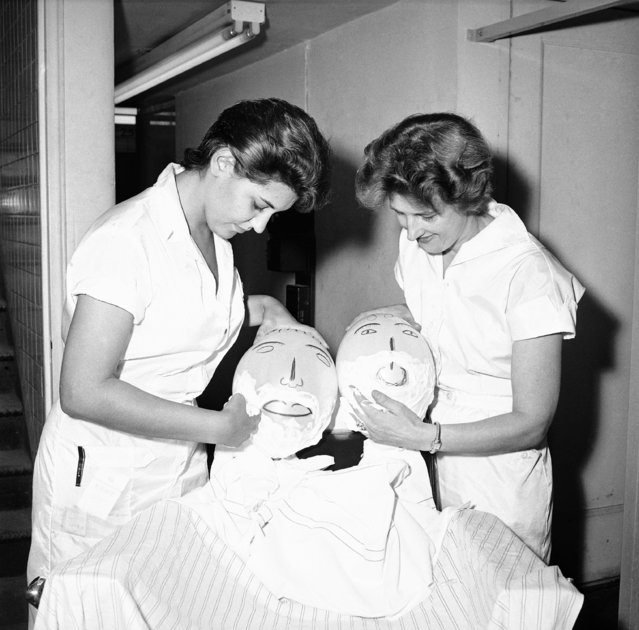 Rosanna Lambert, left and Hrefna Olafsdottir, lather balloon heads at the New York Barber School in New York October 8, 1959. The balloons are used for beginners practicing with a straight edge razor. Miss Lambert is from New York and Miss Olafsdottir is from Reykjavik, Iceland. (Photo by Robert Kradin/AP Photo) 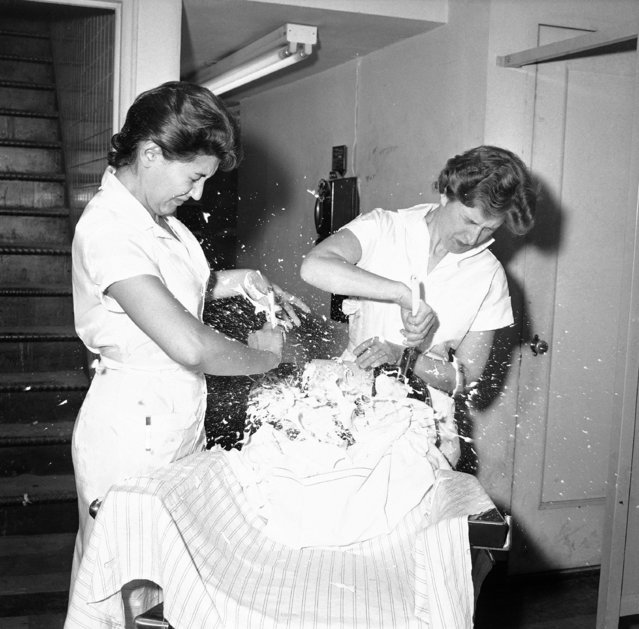 A too-close shave on their balloon head "customers" sends a spray of lather over New York Barber School students Rosanna Lambert, left and Hrefna Olafsdottir, as the balloons burst in New York, October 8, 1959. Harder on the on the student barbers, but easier in the customers, this is the way students at the school learn to use a straight edge razor. (Photo by Robert Kradin/AP Photo) 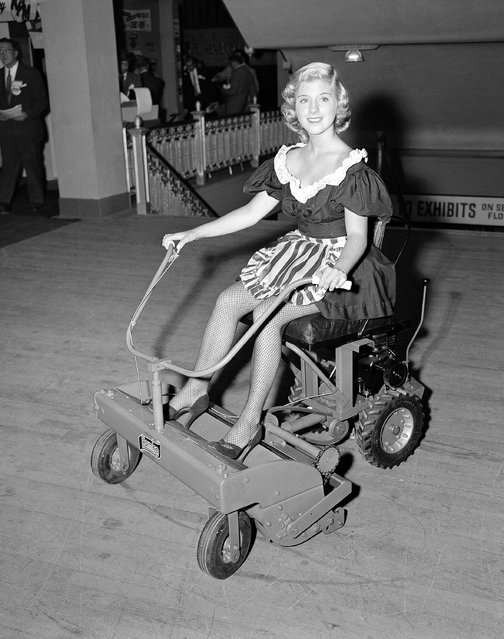 This power lawn mower is one of the new products, large and small, on display at the National Hardware Show in New York, October 8, 1952. Claudia Hall presents the mower which has these features: a 30-inch cutting width, same transmission and differential as an automobile, short wheel base for high maneuverability, cutting speed up to six miles an hour or a rate of an acre of cutting an hour. The power unit is detachable for use elsewhere. The machine, called the "Hoko", is manufactured by the Western Tool and Stamping Co. of Des Moines, Iowa. (Photo by Robert Kradin/AP Photo) 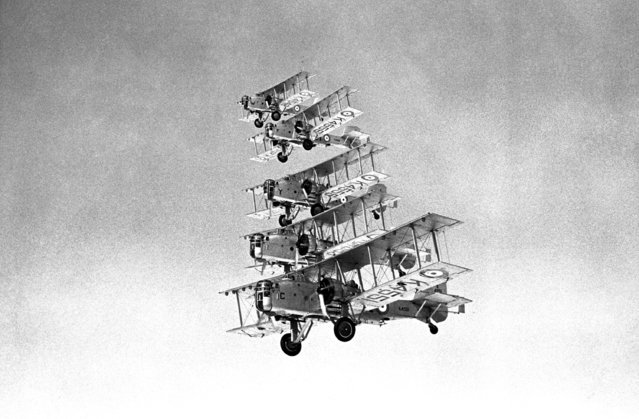 A view of a formation of Overstrand bombing planes, showing the new type of rotating gun turrets which house the machine gunner, in flight over Bicester, Oxfordshire on October 8, 1936. Number 101 bomber squadron of the Royal Air Force has been equipped Woth Boulton and Paul Overstrand bombing planes fitted with Bristol Pegasus twin engines. A feature of these aircraft is the special new rotating gun turrets in the nose of the plane. (Photo by Len Putnam/AP Photo) 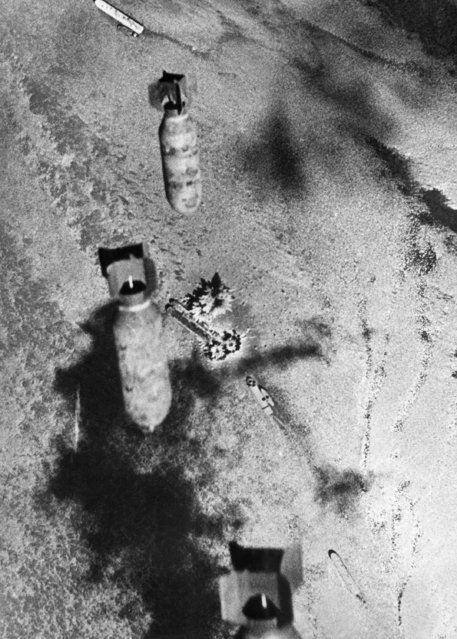 A stick of bombs Japanese shipping on the Irrawaddy River near Mandalay in Burma, October 8, 1943, explode on and around a Japanese flat boat as another stick plunges down for follow up destruction. (Photo by AP Photo) 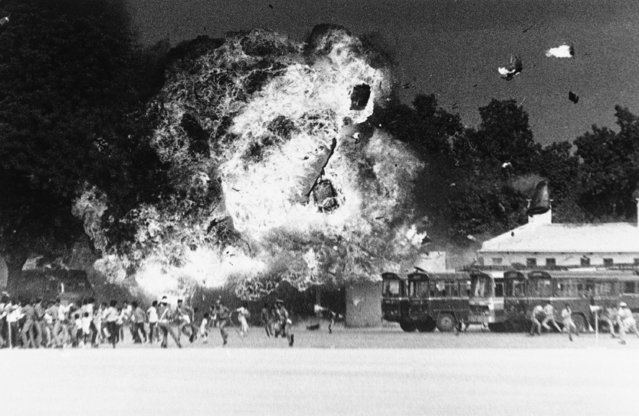 The crowd flees as a Mirage 2000 fighter plane explodes into a huge fireball after crashing at the Indian Air Force Day parade in New Delhi, India, October 8, 1989. The fighter crashed on completing the final fly-by during the parade marking the Air Force's 57th anniversary. The pilot was killed. (Photo by AP Photo) 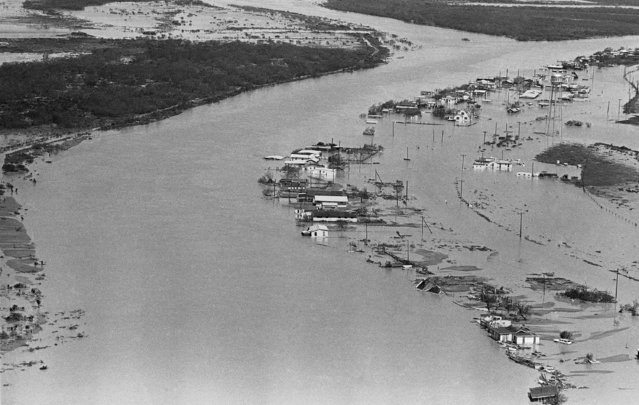 Arroyo City, a string of houses, bait shops and other stores along the Arroyo Colorado was hard hit by hurricane Beulah and the devastating floods that followed on October 8, 1967. (Photo by Ted Powers/AP Photo) 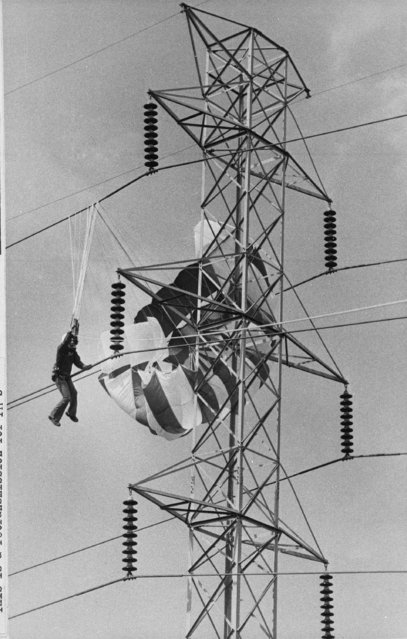 In this October 8, 1978 file photo, 17-year-old Danny Matthews of Irving, Texas is suspended about 60 feet in the air with his parasail caught in a power line. Danny was parasailing, pulled by a truck, when a strong crosswind forced him into the electrical cables. (Photo by Mark Graham/AP Photo) 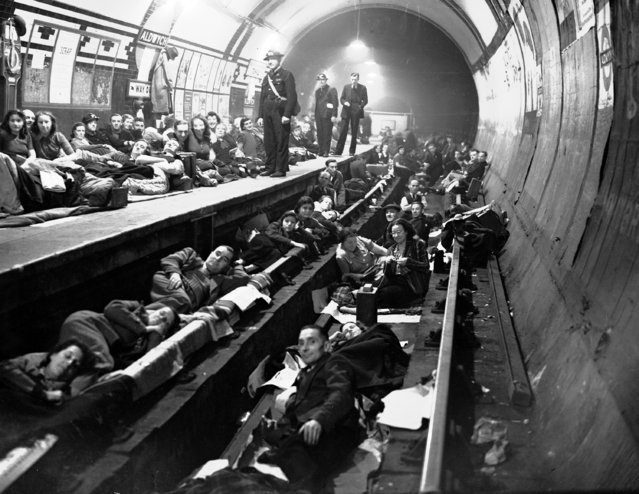 Londoners sleep on the platform and on the train tracks at Aldwych Underground station,London, during heavy all night Nazi bombing raids, October 8, 1940. (Photo by AP Photo) 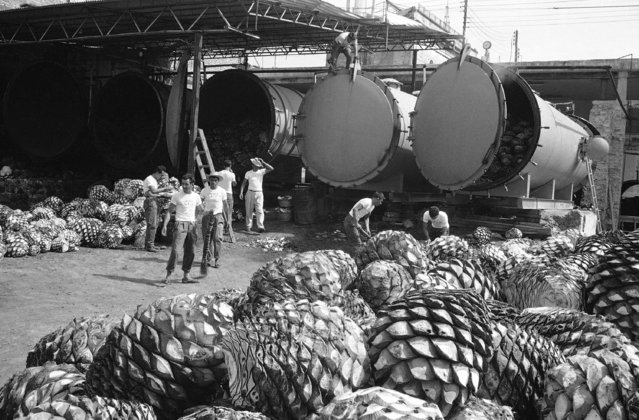 Looking like giant pineapples or perhaps pine cones, the cores of Mexico's century plant, are harvested and cooked to provide the basic juices from which the country's famous liquor - tequila - is made in Mexico on October 8, 1964. A move is underway to refine the Aztec-originated drink to bring it closer on the social scale to such sophisticated liquors as scotch. (Photo by AP Photo) 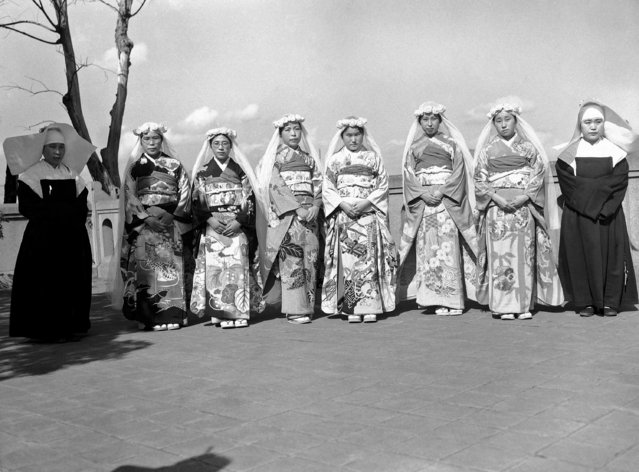 The group before and after the ceremony, the two nuns on the left have taken their final vows, the other in the group in their kimonos will, after an 18 month period of preparation be ready to take their final vows as nuns in Tokyo, Japan on October 8, 1946, LTOR Toshi Kuriyuma, from Tokyo, now Sister Margarita, Kyoka Endo, from Sendai, now Sister Marie Assunta, Lku Noda, from Fukuoka, now, Sister Agnes de Marie, Yurika Takahashi, from Wakamatsu, now Sister he l'Annonciation, Kazuko Nishidate, from Sendai, now Sister de St. Paul, Machiko Henokuma, from Kamakura, sister Marie Dolores, Taku Kimura, Sendai, now sister Marie, Shizu Kataaka, from Nagasaki, now Sister Angelus. (Photo by C. P. Gorry/AP Photo) A Seoul policeman attempts to remove a woman who was overcome with emotion during a mass by Pope John Paul II on October 8, 1989 in Seoul's Youido Plaza. An estimated 600,000 people attended the mass. (Photo by Yun Jai-Hyoung/AP Photo) 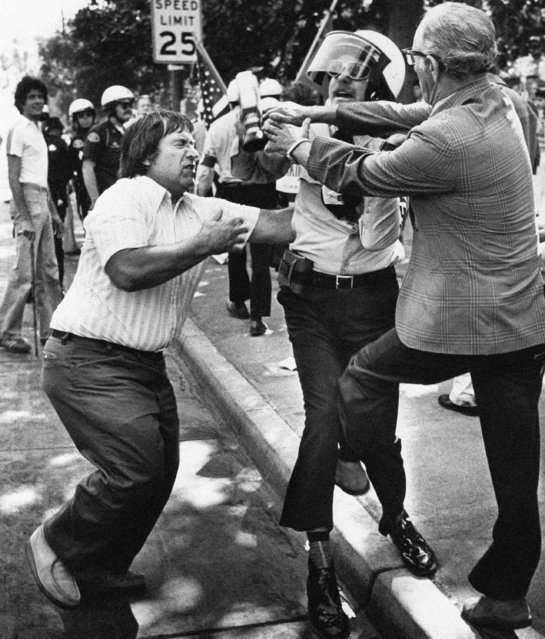 A Nazi demonstrator fights with anti-Nazi protestors during a demonstration by the National Socialist White Workers Party at St. James Park in San Jose, Calif., October 8, 1977. Eight uniformed Nazis dodged eggs, tomatoes, sticks and fists, as an angry crowd of 2,000 made pandemonium of the white-power demonstration. (Photo by Paul C. Strong/AP Photo) 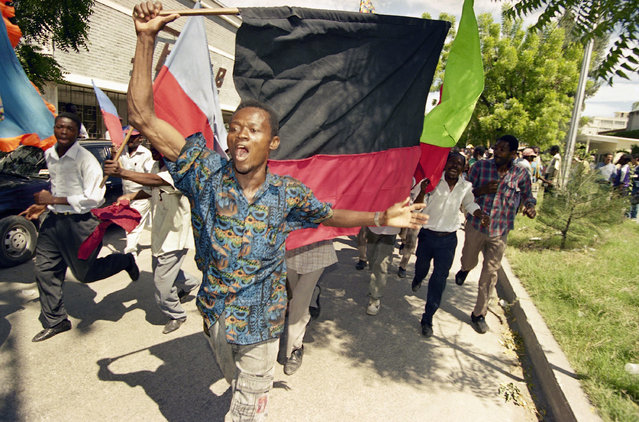 Haitian armed civilians, called attaches, run through a Port-au-Prince street carrying the black and red flag of former dictator Francois Papa Doc Duvalier as they demonstrate against the return of ousted Haitian President Jean-Bertrand Aristide and against the U.N. mission in downtown Port-au-Prince, Haiti on Friday, October 8, 1993. Aristide is scheduled to be returned to power by the end of October. (Photo by Michael Stravato/AP Photo)
Edit Del
10 Oct 2015 08:06:00, post received 0 comments
Publication archive:
←   →
Popular tags:
All tags
Last searches: