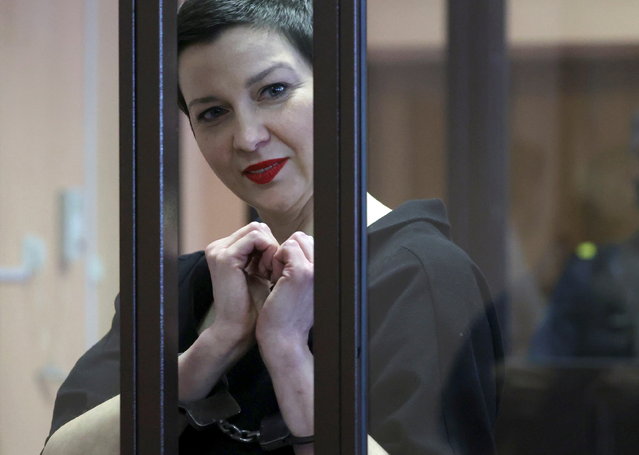 Belarusian opposition politician Maria Kolesnikova, charged with extremism and trying to seize power illegally, forms a heart shape in handcuffs inside a defendants' cage as she attends a court hearing in Minsk, Belarus September 6, 2021. (Photo by Ramil Nasibulin/BelTA/Handout via Reuters) 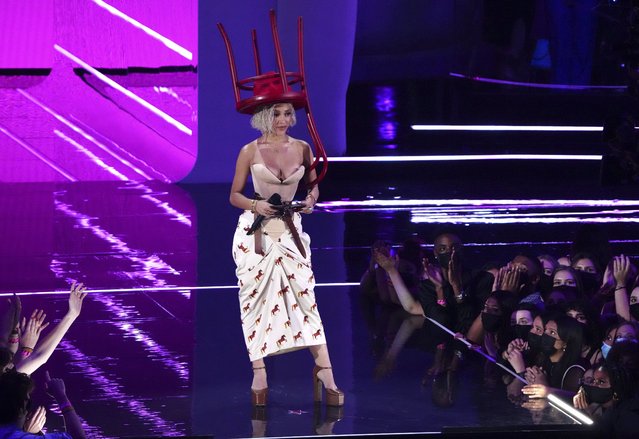 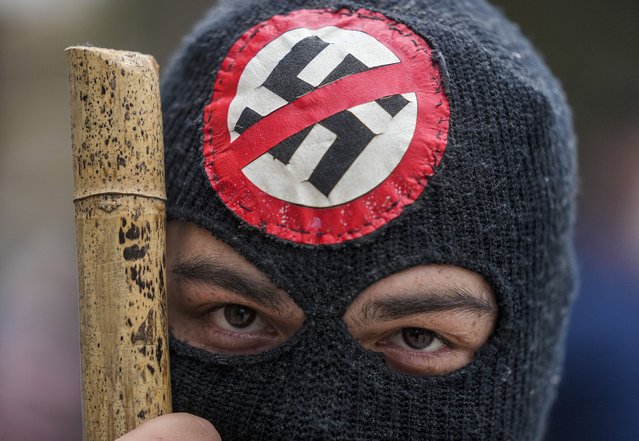 A protester wears a mask adorned with an anti-Nazi symbol during protests marking the 48th anniversary of the 1973 military coup and the death of Chile's late President Salvador Allende, in Santiago, Chile, Saturday, September 11, 2021. The coup ousting the democratically elected leader, Allende, began the dictatorship of Gen. Augusto Pinochet. (Photo by Esteban Felix/AP Photo) 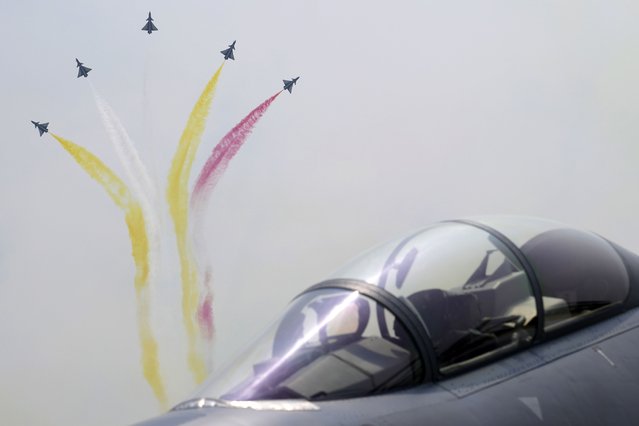 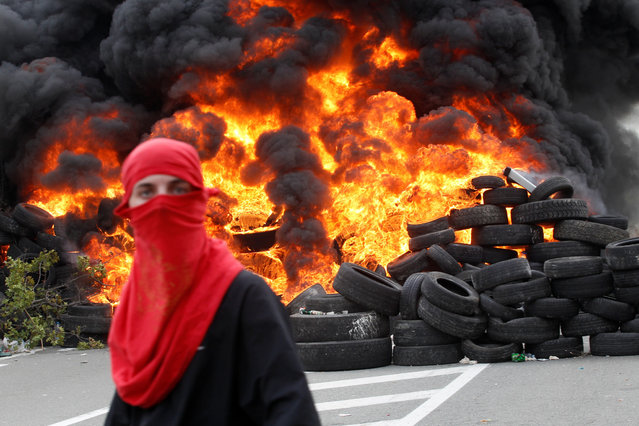 A demonstrator stands in front of a barricade set on fire during a protest against the enthronement of Bishop Joanikije in Cetinje, Montenegro, September 5, 2021. (Photo by Stevo Vasiljevic/Reuters) 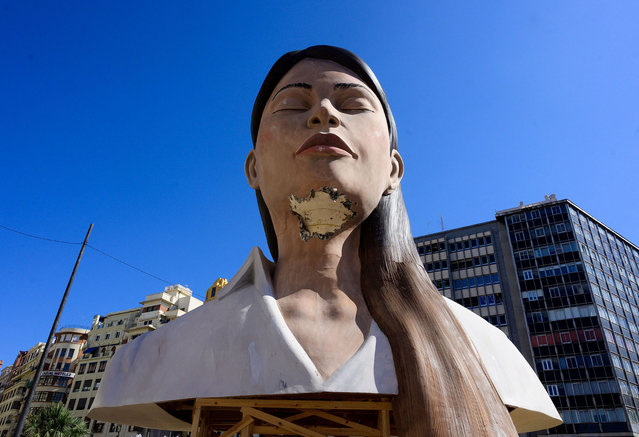 A falla damaged by yesterday's heavy rains is pictured during the Fallas festival in Valencia on September 2, 2021. In Valencia, yesterday's deluge of water disturbed the organization of the Fallas, the major festival in the region featuring parades of floats and giant cardboard sculptures, postponed from March to September due to the pandemic. (Photo by Jose Jordan/AFP Photo) 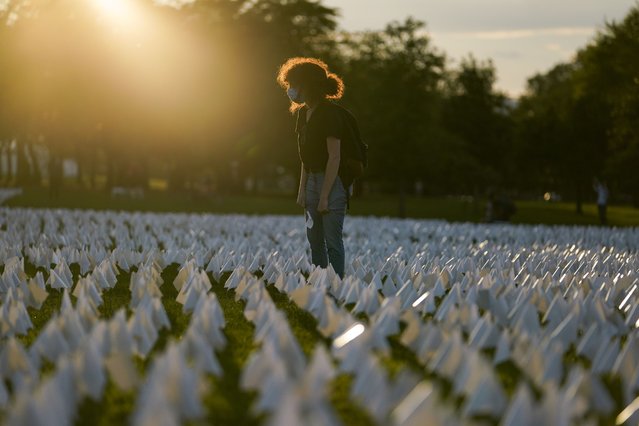 Zoe Nassimoff, of Argentina, looks at white flags that are part of artist Suzanne Brennan Firstenberg's temporary art installation, “In America: Remember”, in remembrance of Americans who have died of COVID-19, on the National Mall in Washington, Friday, September 17, 2021. Nassimoff's grandparent who lived in Florida died from COVID-19. (Photo by Brynn Anderson/AP Photo) 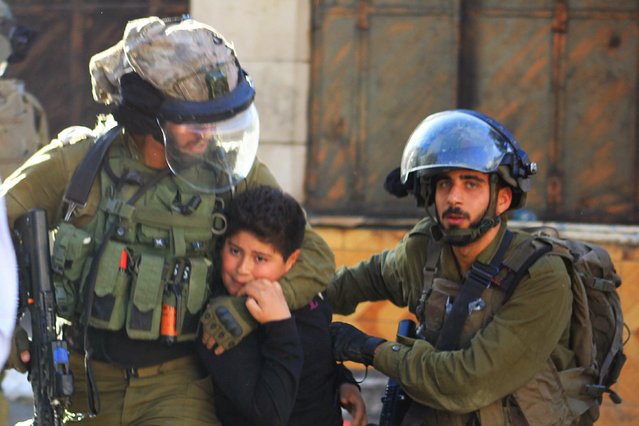 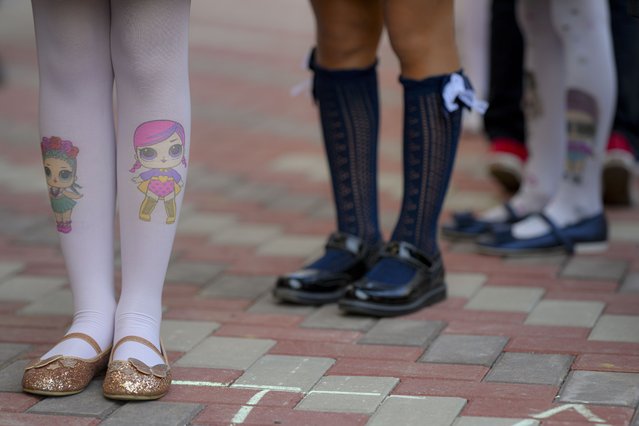 Children take part in festivities marking the beginning of the school year at a school in Bucharest, Romania, Monday, September 13, 2021. Children returned to classrooms in Romania, a country with one of the lowest COVID-19 vaccination rates in the European Union, as the daily infection numbers continue to rise. (Photo by Andreea Alexandru/AP Photo) 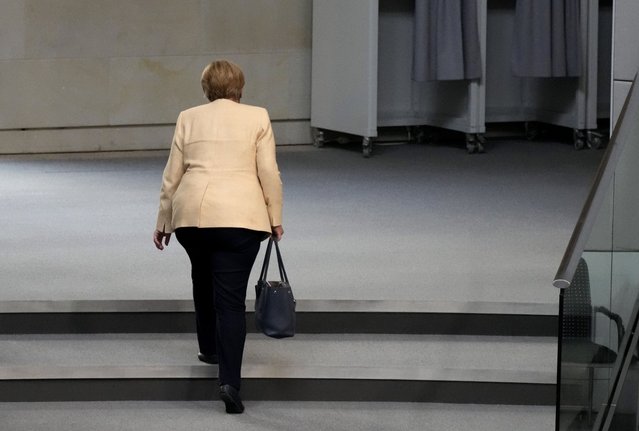 German Chancellor Angela Merkel leaves the plenary hall after a debate about the situation in Germany ahead of the upcoming national election in Berlin, Germany, Tuesday, September 7, 2021. National elections are scheduled in Germany for Sept. 26, 2021. (Photo by Markus Schreiber/AP Photo) 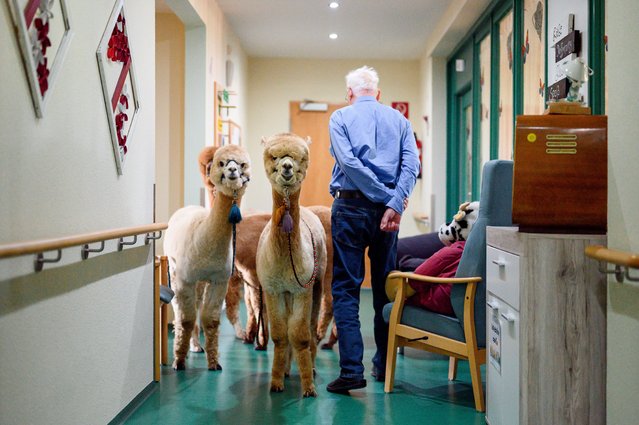 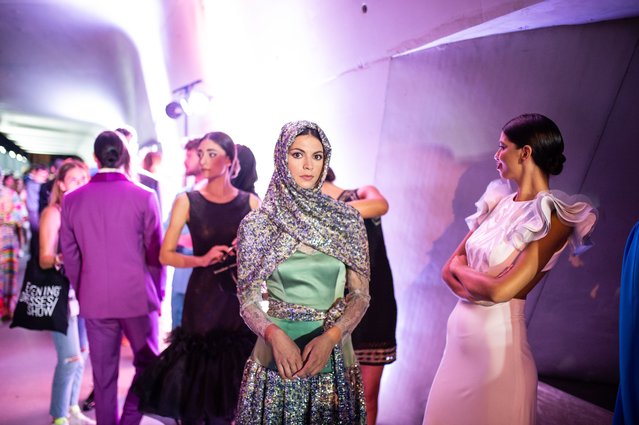 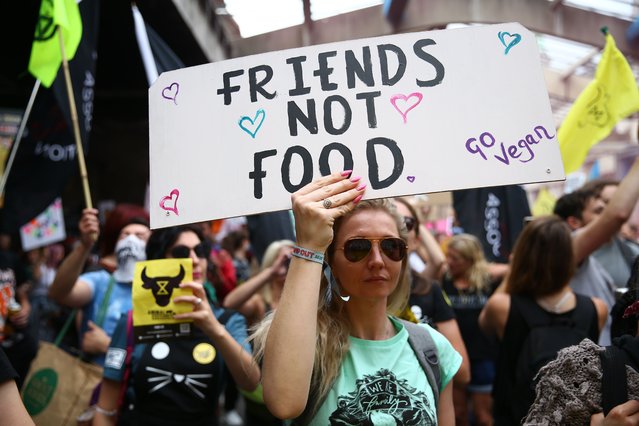 An animal rights protestor hold a placard saying “Friends Not Food” during a march through central London on August 28, 2021 in London, England. The demonstration is part of the “August Rebellion”. (Photo by Hollie Adams/Getty Images) 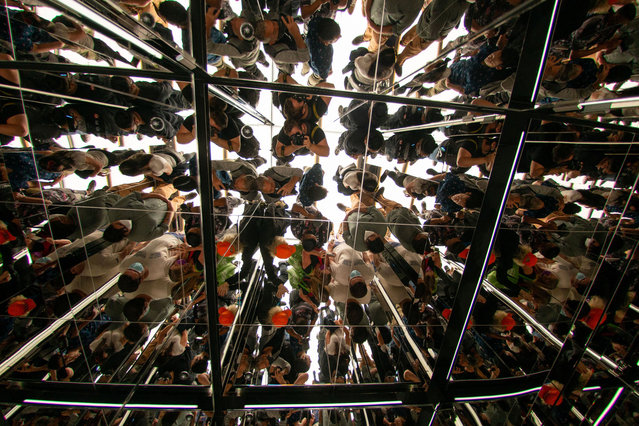 People ride a 91 story which takes 41 seconds at Summit One Vanderbilt during a press preview on September 24, 2021 in New York City. Summit One Vanderbilt is an immersive experience and observation deck featuring the permanent “Air” installation by Kenzo Digital. It also includes an outdoor terrace, a glass elevator on the exterior of the building at 1,210 feet, glass bottom booths overlooking Madison Avenue at 1,063 feet, as well as eating experiences. Summit One Vanderbilt opens to the public on October 21, 2021. (Photo by Alexi Rosenfeld/Getty Images) 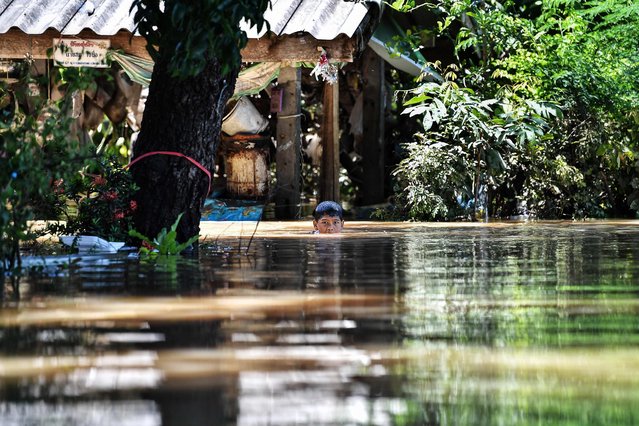 A boy swims through a flooded village in the central Thai province of Lopburi on September 28, 2021, as tropical storm Dianmu caused flooding in 30 provinces across the country. (Photo by Lillian Suwanrumpha/AFP Photo) 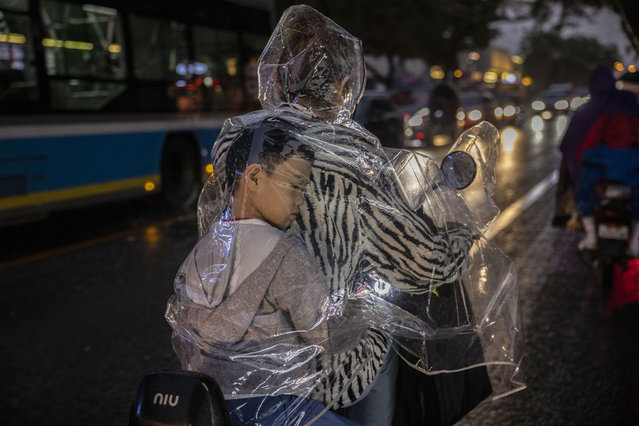 A boy sits inside his mother's plastic raincoat as they ride on a scooter during a rainstorm on September 8, 2021 in Beijing, China. While cases were relatively low compared to many countries, China has recently contained a COVID-19 outbreak of the highly contagious Delta variant. (Photo by Kevin Frayer/Getty Images)
Edit Del
20 May 2022 05:12:00, post received 0 comments
Publication archive:
←   →
Popular tags:
All tags
Last searches: