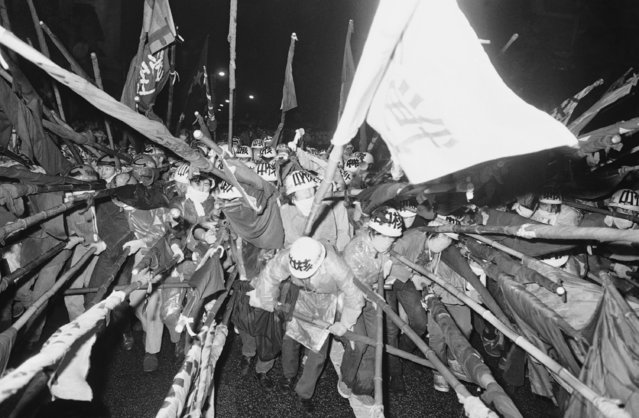 Armed with bamboo poles and protected with hard hats, a massed group of Japanese students surge forward to begin a demonstration in Tokyo on September 30, 1971. Their protest was against terms for the return of Okinawa from U.S. to Japanese control. The Zengakuren, Japan's extremist national student organization is badly splintered into a bewildering number of factions and ideologies. About the only thing they have in common is their traditional anti-Americanism. (Photo by AP Photo) 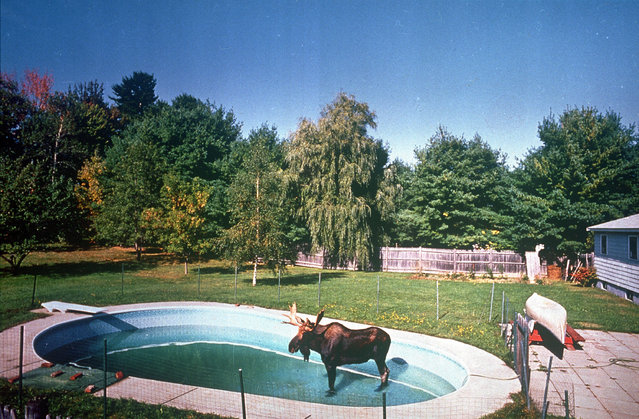 An 800-pound bull moose appears to be relaxing in a swimming pool in Lewiston, Mo., September 29, 1992. A wildlife official suggested the wild beast was roaming the city because it is mating season. The moose was later tranquilized and taken to a state game farm. (Photo by Ken Love/AP Photo/Sun-Journal) 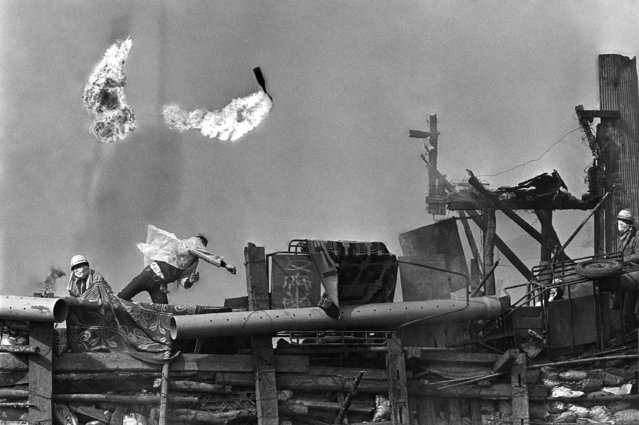 Japanese students hurl flaming Molotov cocktails at police, from a barricaded area they have built at the site of a proposed new airport, 60 miles from Tokyo, September 30, 1971. Fifty-two hundred leftist students and farmers opposed to the building of the airport fought pitched battles with police last month; three police men were killed, many injured. Numbers of radical students in Japan had been declining, but police said they still believed in the possibility of further dramatic action by remaining militants. (Photo by Toichi Sakakibara/AP Photo) 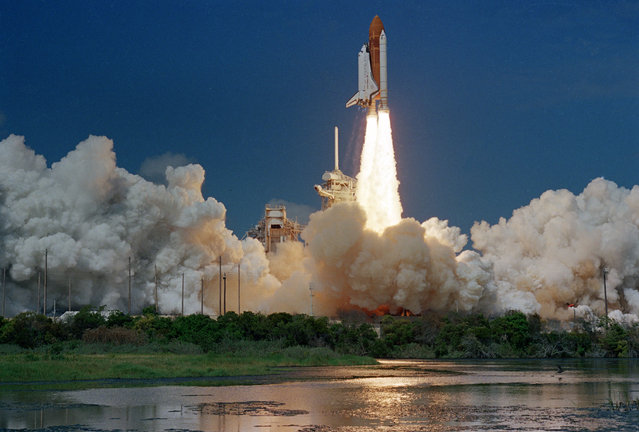 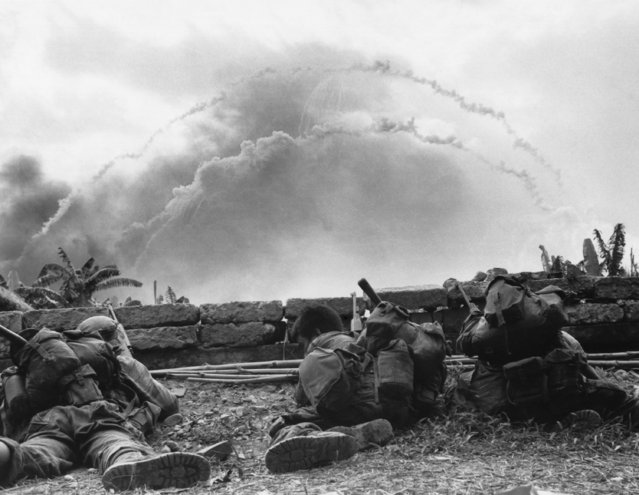 Three Vietnamese Special Forces troopers take cover behind a low wall while white phosphorous grenades being fired make a rainbow shaped are through the sky in the background. The soldiers from the mobile strike force (Mike) are engaging North Vietnamese troopers who overrun outposts near the Thuong Duc Special Forces camp, 30 miles West Southwest of Danang, September 30, 1968. The camp's artillery on the other side of the Vu Gia river is supporting the Allied troops advancing towards the camp to help in its defense. (Phoot by AP Photo/Phuoc) 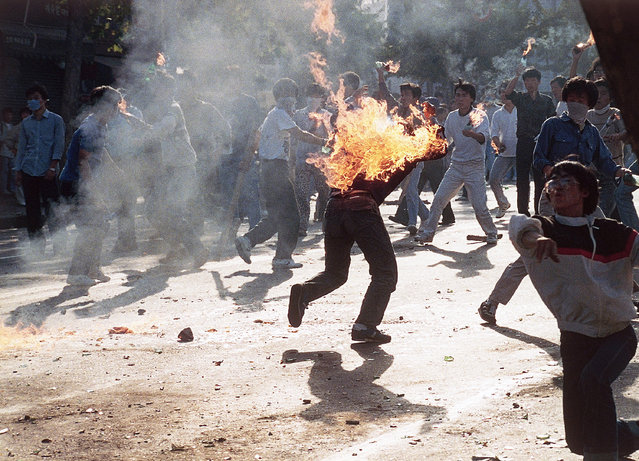 A South Korean student engulfed in flames runs for safety as his compatriots launch home-made firebombs toward riot police during anti-government, anti-Olympic demonstrations at Korea University in Seoul, South Korea on September 29, 1988. (Photo by AP Photo) 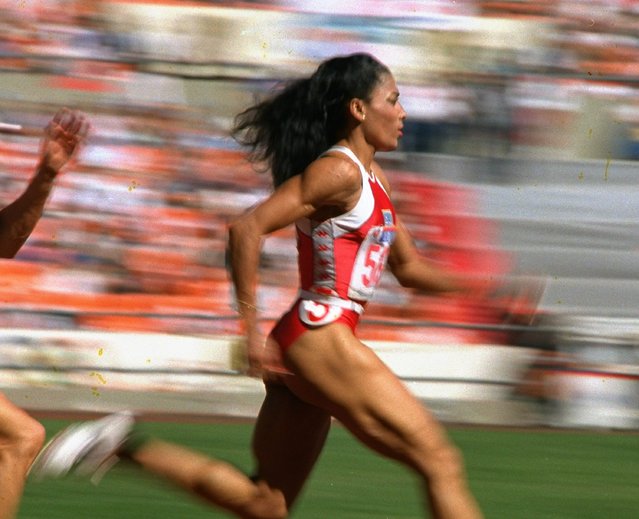 U.S. sprinter Florence Griffith Joyner of Los Angeles strides to a world record in a semifinal heat of the Olympic women's 200-meter dash in Seoul Thursday, September 29, 1988. Joyner's time of 21.56 seconds claimed the record and moved her into the finals in the event. (Photo by Lennox McLendon/AP Photo) 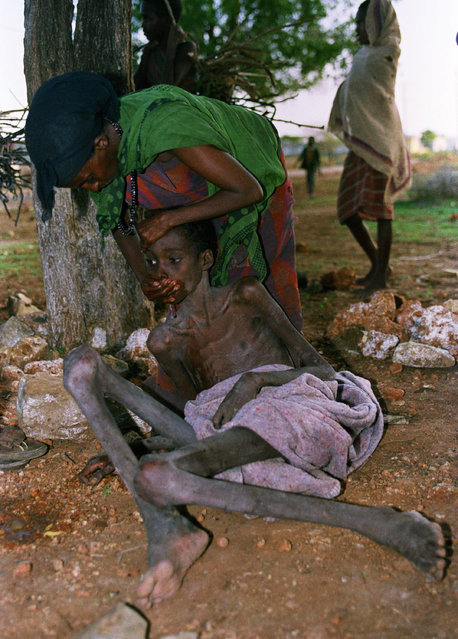 A dying Somali is force-fed by an unidentified local volunteer worker, outside the hospital in Baidoa on Saturday, September 29, 1992. Having eaten, the boy vomited his food, laid his head on the ground and died. The death rate in Baidoa is rising due to deteriorating security and an upsurge in clan warfare which are preventing enough food from being delivered by road. (Photo by Hassan Amini/AP Photo) 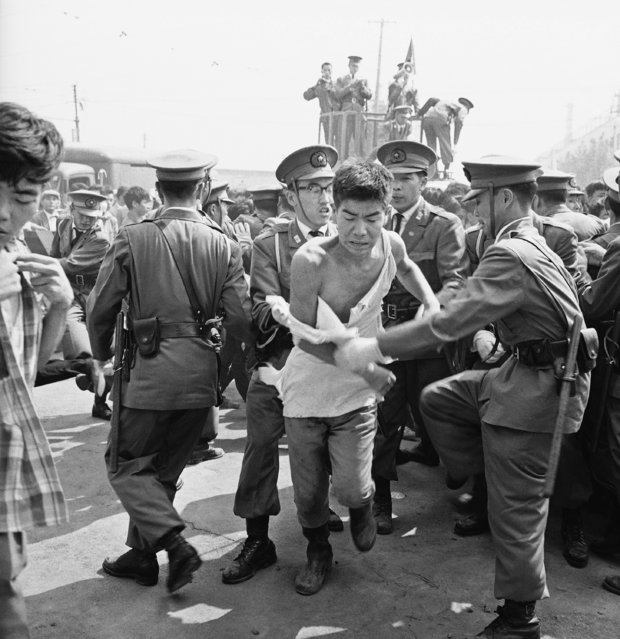 Tokyo police lead away a student whose shirt is torn to shreds after a clash between police and left wing groups for the second consecutive day in downtown Tokyo, September 29, 1962. The demonstrations were against public hearings on constitutional reforms. (Photo by Mitsunori Chigita/AP Photo) 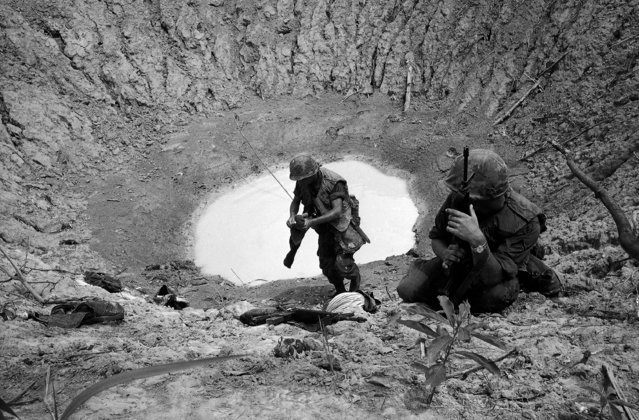 Soldiers of the 25th Infantry Division take shelter in crater caused by bomb from a B52 in the Ho Bo Woods, some 25 miles northwest of Saigon in South Vietnam on September 29, 1967. The division, supported by strikes from the B52 bombers, has been clearing 18,000 acres of the woods in effort to rout entrenched enemy. (Photo by Dang Van Phuoc/AP Photo) 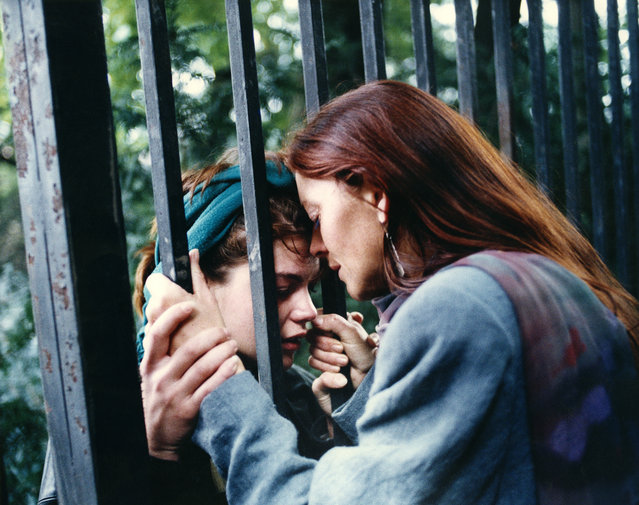 An East German mother cries as she says goodbye to her daughter as the fence of the West German embassy in Prague separates them Saturday, September 30, 1989. The mother went back to East Germany and the daughter stayed with some 3,300 refugees who hope for emigration to the West. (Photo by Diether Endlicher/AP Photo) 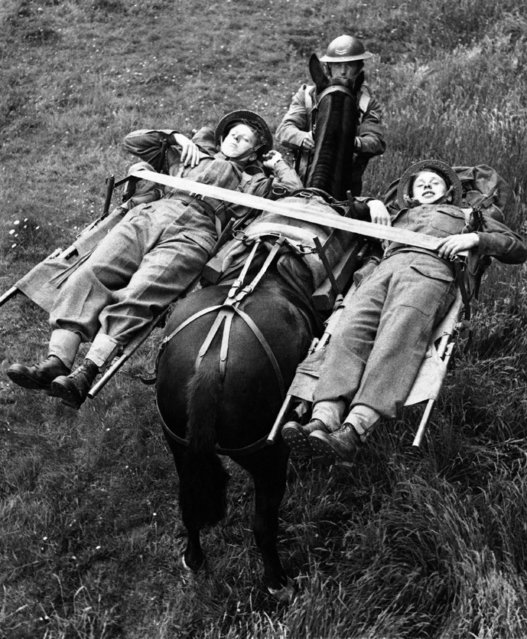 These British soldiers demonstrate how to climb a mountain lying down as they travel in an airborne stretcher on a Johnston carrier in England, September 30, 1944, much as panniers were once slung across the backs of horses. It is part of the latest in mountain warfare equipment. (Photo by AP Photo) 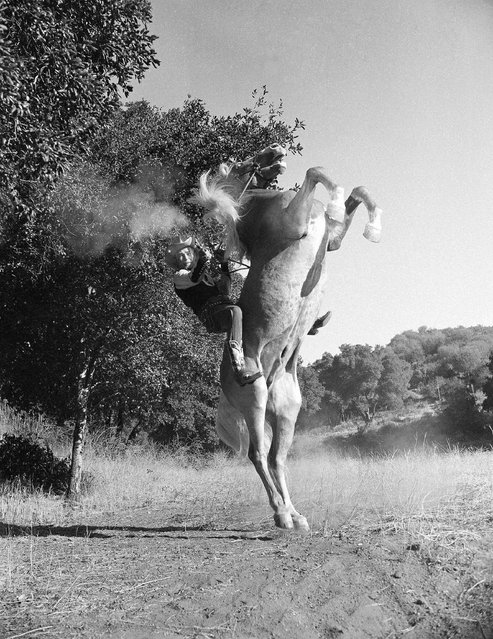 Roy Rogers, cowboy star of the Hollywood screen, rears his famous horse Trigger up short to get this magnificent effect for a scene in their latest film Under California Stars in Los Angeles on September 30, 1948. (Photo by AP Photo) 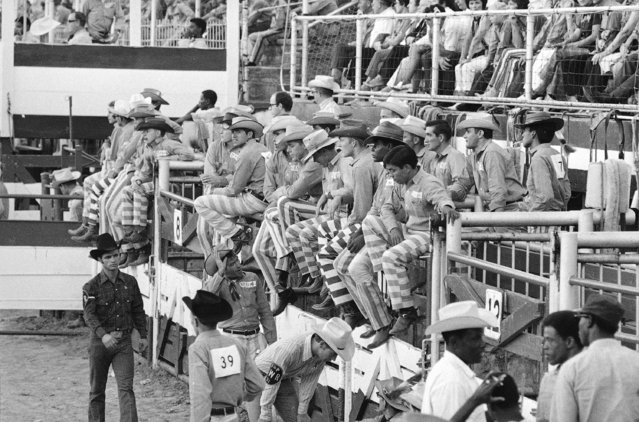 To separate the convicts from the professional cowboys participating in the rodeo at the Oklahoma State Penitentiary, trousers with prison stripes are worn by the convicts, seen September 29, 1971, in McAlester, Oklahoma. Normal rodeo garb is blue shirts and denim jeans. (Photo by Eddie Adams/AP Photo) 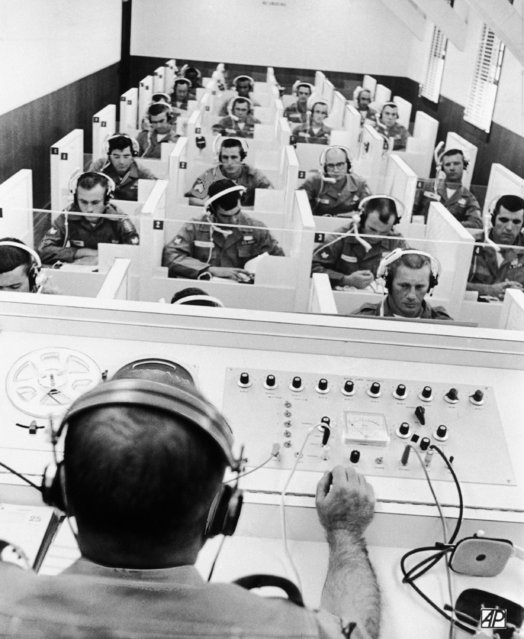 Students sit in booths, wearing earphones as they receive language instruction at the Special Warfare Center at Fort Bragg, N.C., September 29, 1964. The center trains soldiers in counter insurgency psychological operations and special warfare to replace the old fashioned, command-type soldier. The language school teaches everything from Swahili to Burmese in many dialects. No one has ever flunked as the center believes if a man can learn English he can learn any other language. (Photo by AP Photo) 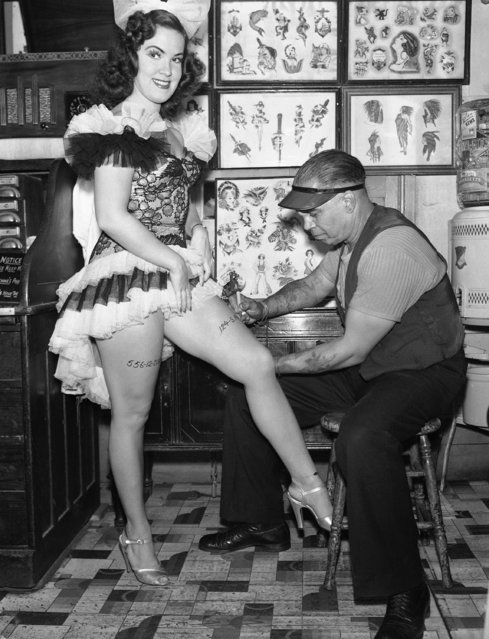 'Be prepared' is the motto of petite Doris Sherrell, vocalist and dancer with Blackouts of 1942. In the event of a bombing, the young lady had her social security number tattooed on one leg by artist Jack Julian, and address placed on the other limb for means of identification in Los Angeles, September 29, 1942. (Photo by AP Photo) 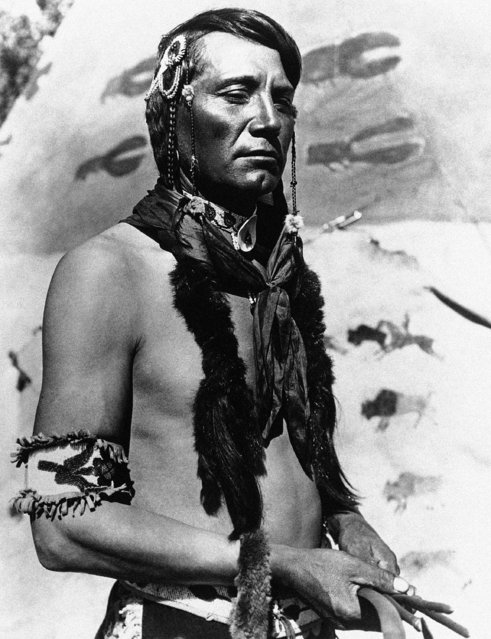 A Native American man, the yellow head of the Glacier National Park Reserve shown around September 30, 1930. (Photo by AP Photo) 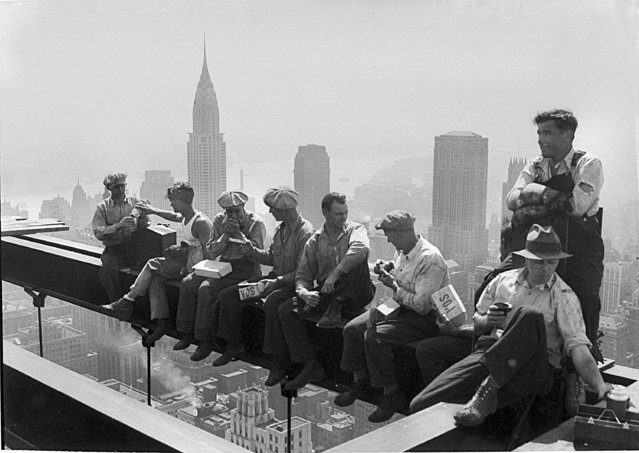 Construction workers take a lunch break on a steel beam atop the RCA Building at Rockefeller Center, New York, September 29, 1932. In the background is the Chrysler Building. (Photo by AP Photo) 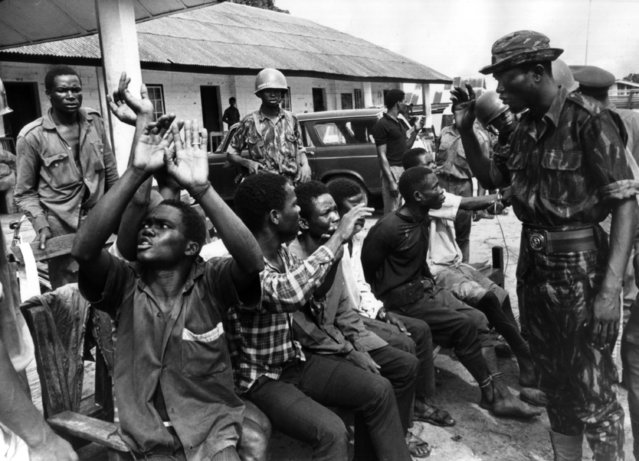 An Ibo soldier captured by Nigerian federal troops near Owerri in Biafra throws his hands up in anguish as hIS captors tell him he will be sentenced to death as a traitor, September 30, 1968. (Photo by Dennis Lee Royle/AP Photo) 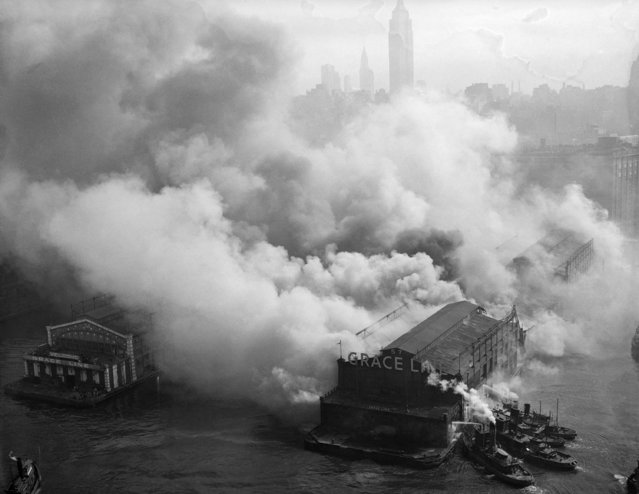 Smoke from a massive fire pours out of Pier 57 on the Hudson River at 15th Street in New York, September 29, 1947. The blaze swept the structure for more than 16 hours causing most of the pier to collapse into the river. (Photo by AP Photo) 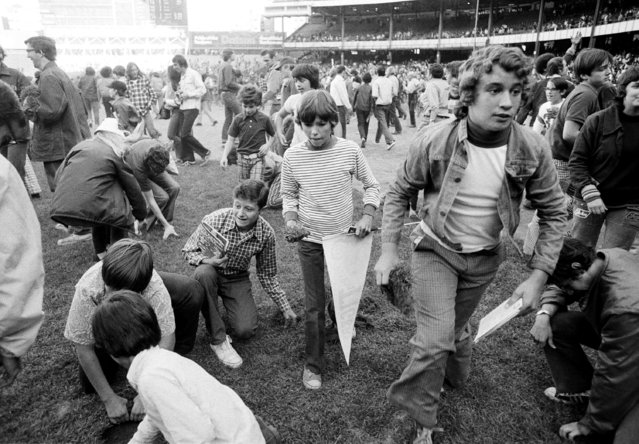 Fans attempt to take apart Yankee Stadium in New York City, on the last day of the season, September 30,1973. It was the last day of the old stadium, in use since 1923, prior to renovation which should take at least two years. (Photo by Richard Drew/AP Photo) 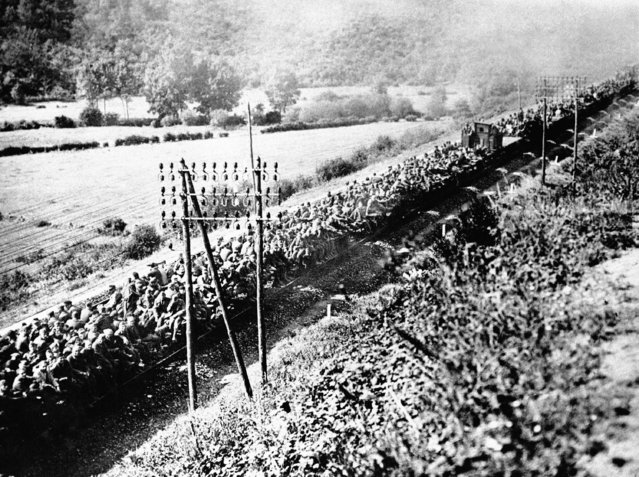 Railroad flat cars are crowded with German prisoners as they leave the French port city of Brest for prisoner of war enclosure on September 30, 1944, where the German soldiers will be interned. The men put up stubborn resistance before surrendering to the allies. (Photo by AP Photo) 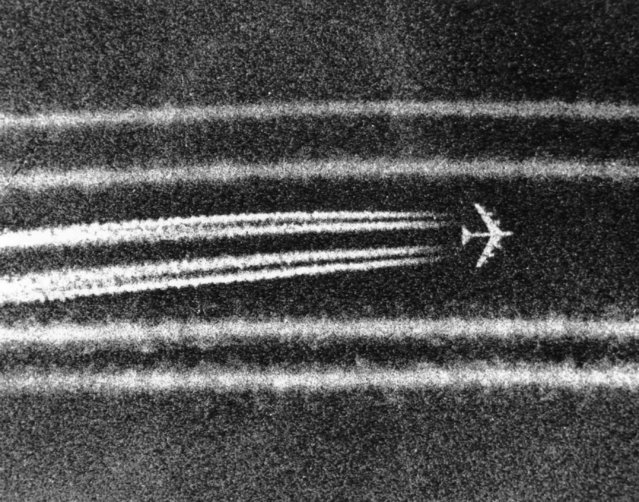