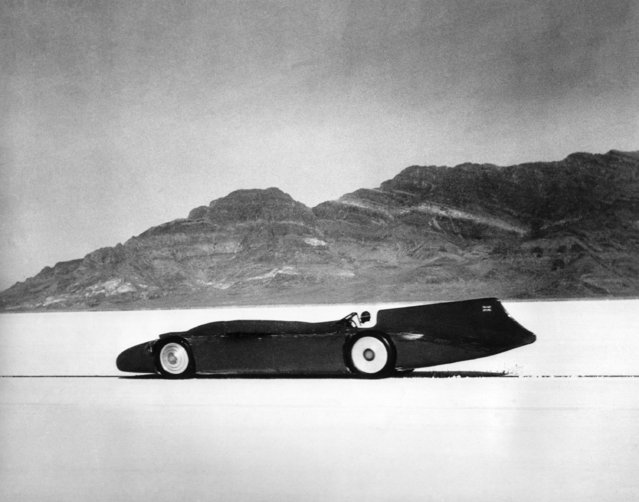 British automobile racer Sir Malcolm Campbell speeds across the salt bed in his Bluebird and sets a world record of 301.337 miles per hour on the Bonneville Salt Flats, Utah, September 3, 1935. (Photo by AP Photo) 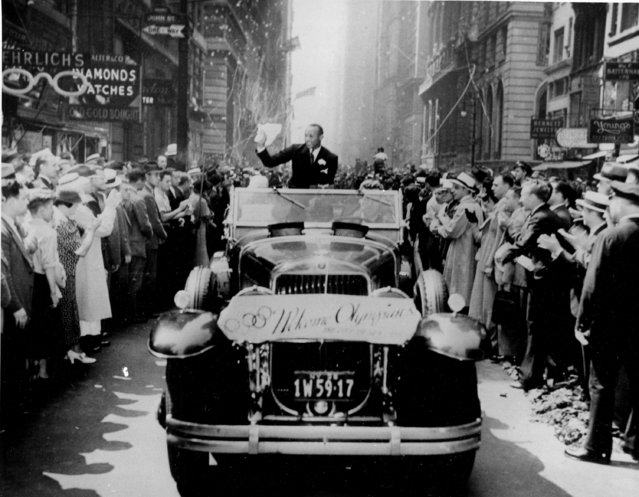 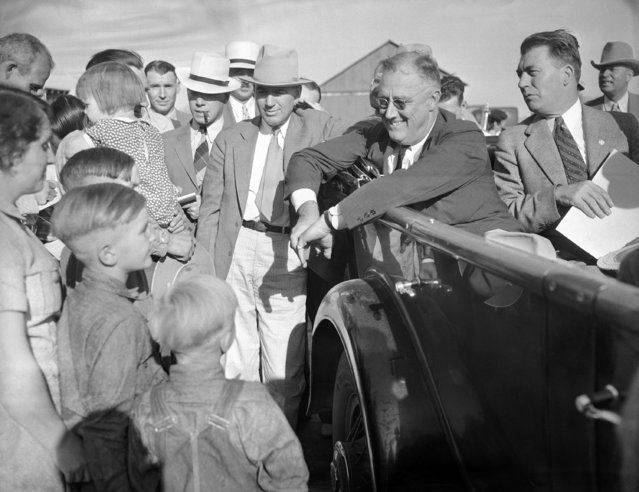 President Franklin Roosevelt, getting drought information first-hand in his car as he talked with farmer Will Duerr and his family in Julesburg, Colo. on September 3, 1936. (Photo by AP Photo) 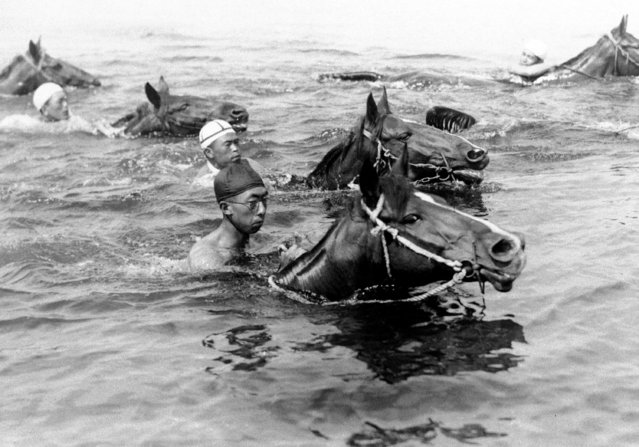 Prince Mikasa, in foreground wearing black skull cap, youngest of the three brothers of Emperor Hirohito, participates in the exercises of the 15th Cavalry Regiment, swimming mounts across the river in Tokyo, September 3, 1936. Prince Mikasa, a graduate of the army cadet school, is expected to be commissioned a cavalry officer soon. (Photo by AP Photo) 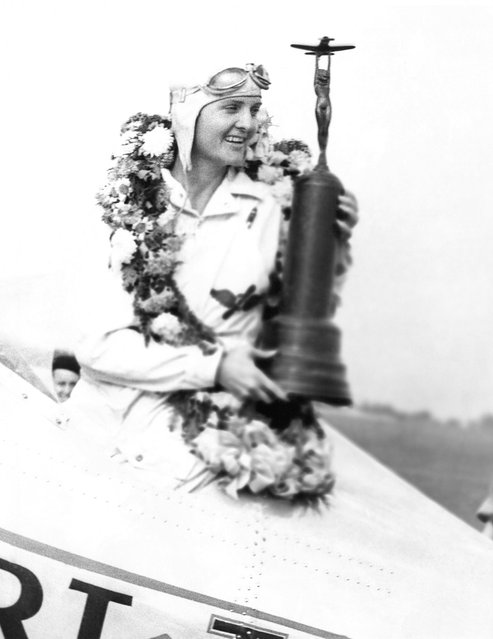 Miss Gladys O'Donnell of Long Beach, Calif., is shown in the cockpit of her plane at the national air races in Cleveland, on September 3, 1937 after she had won the Amelia Earhart memorial race, Miss O'Donnell has the trophy and wreath signifying victory. (Photo by AP Photo) 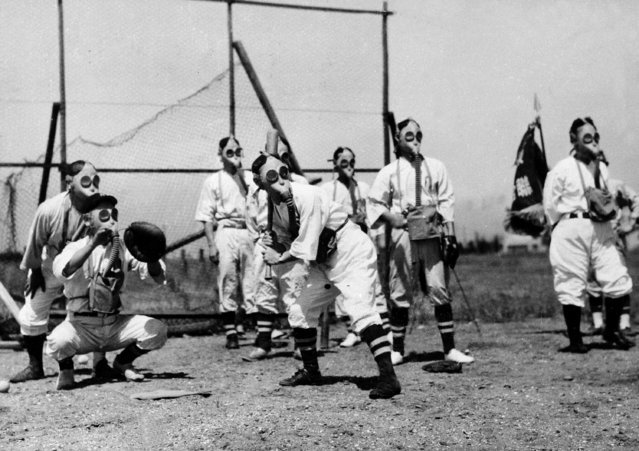 Ball players are seen playing while wearing gas masks, September 3, 1938 in a psychological and physiological experiment by the Tokyo air defense bureau. (Photo by AP Photo) 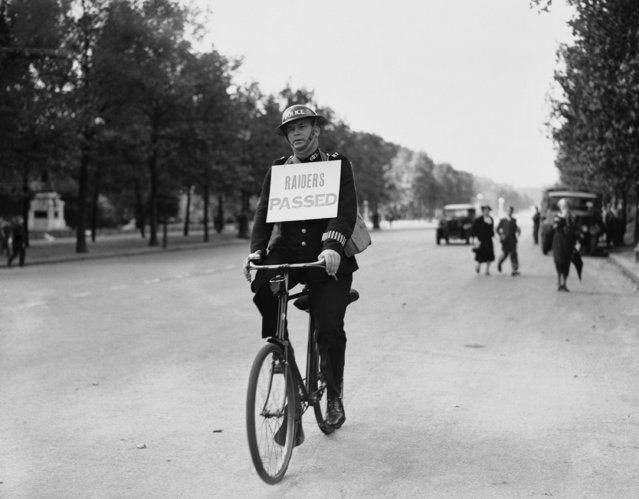 A policeman cycles through London's streets with the raiders passed notice, on September 3, 1939, after the first raid warning of the war. (Photo by AP Photo) 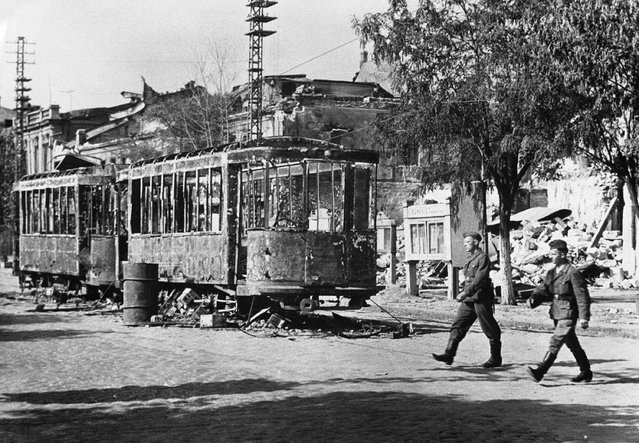 Nazi soldiers are seen here crossing a street in Vernolejinsk in the Southern Ukraine on September 3, 1941 after the Russians had evacuated it. Note the burnt-out street cars in the centre of the road fired by the Russians in accordance with their 'Scorched Earth' policy before they left. (Photo by AP Photo) 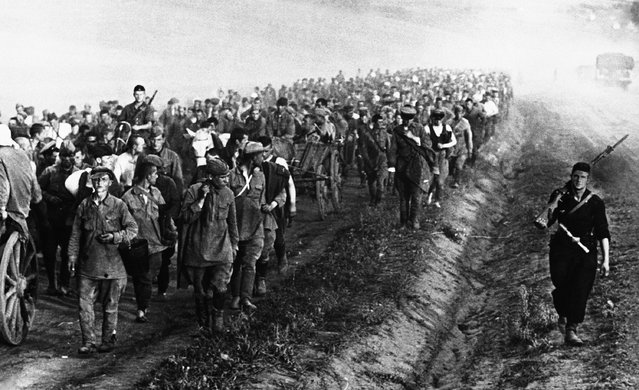 An endless column of Russian prisoners of war taken during recent fighting in the Ukraine on their way to a Nazi prison camp on September 3, 1941. (Photo by AP Photo) 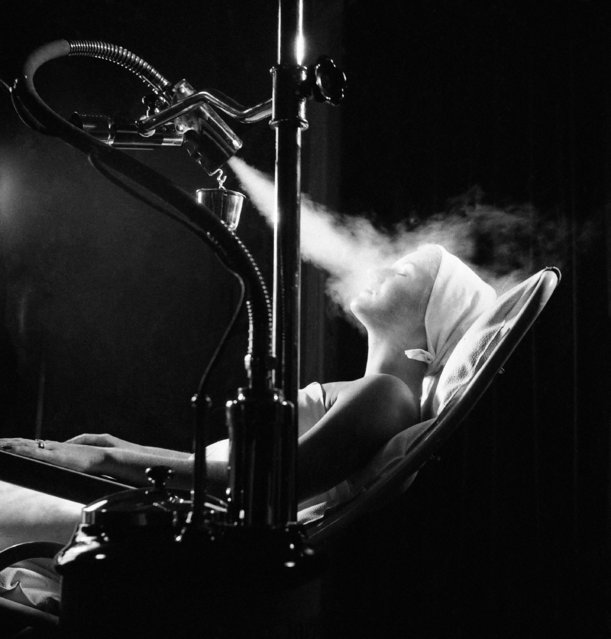 This vaporizer, shown at a beauty trade fair in Munich, Germany on September 3, 1952, will help prevent colds and sore throats while it refreshes and rejuvenates the skin, according to the claims of the Swiss manufacturers. They say that the electric device, called “Vapozone”, ionizes steam. It is designed for use in beauty shops for skin treatments. (Photo by AP Photo) 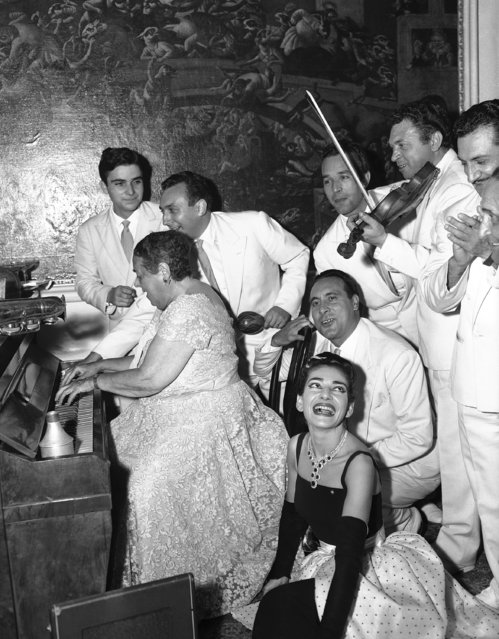 Elsa Maxwell plays the piano during party in Venice, September 3, 1957. Maria Meneghini Callas, in whose honor the ball was given, sits in low corner right foreground, listening, while orchestra members are standing round. (Photo by Jim Pringle/AP Photo) 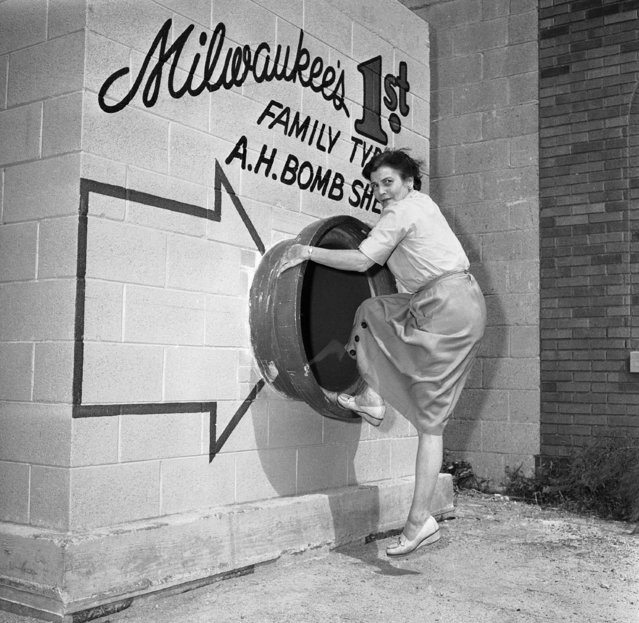 Mrs. Marie Graskamp of Milwaukee shows the different positions one might assume when entering the bomb shelter in Milwaukee September 3, 1958. This circular entrance is about three feet in diameter. This is the entrance (according to the builders) that would connect to the cellar of a home assuming the shelter was in the ground for added protection. If a bombing should occur, all members of family would proceed to the cellar and then through the circular port into the shelter. (Photo by AP Photo) 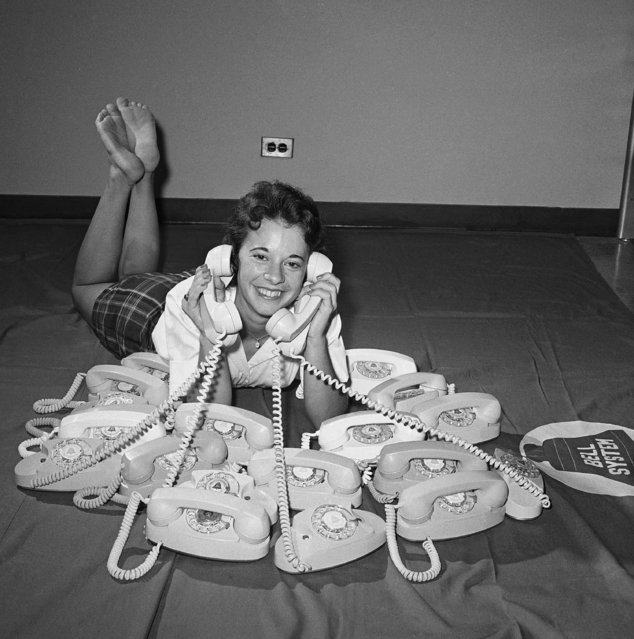 Long distance operator Elizabeth Keener, 18, poses with the Princess, an oval-shaped telephone called an attempt to obtain a design of classic simplicity by designer Henry Drefuss of Bell Laboratories, September 3, 1959, Atlanta, Ga. Bell says it is the sixth major home telephone alteration since the original invention in 1876. (Photo by Horace Cort/AP Photo) 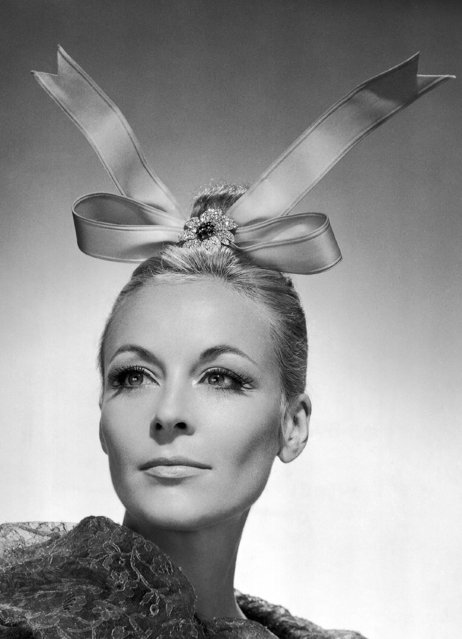 Famed French fashion designer Balenciaga created this eye catching head dress by placing a pink satin bow, ends up, on top of his models head and attaching it to a small chignon with a diamond – paved aster shown September 3, 1965. The diamond flower clip is by Van Cleef and Arpels. (Photo by AP Photo)

David Bowie is shown as he prepares for an appearance on ABC-TV's “Good Morning America”, in New York, September 3, 1980. (Photo by Dave Pickoff/AP Photo) 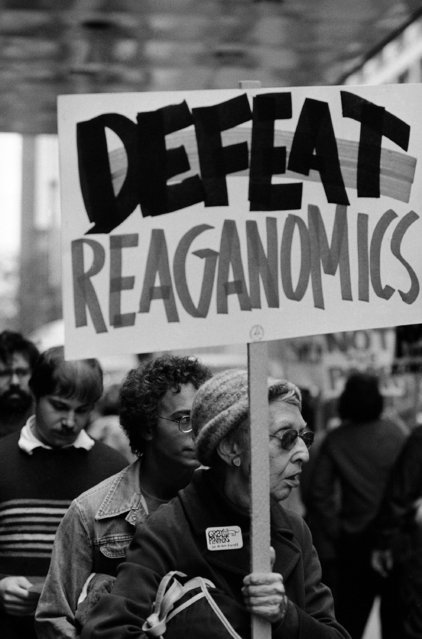 Woman demonstrator holds “Defeat Reaganomics” sign down the street from hotel in which President Reagan stayed in Chicago, September 3, 1981. Police kept the demonstrators one-half block from the President. (Photo by Jim Bourdier/AP Photo) 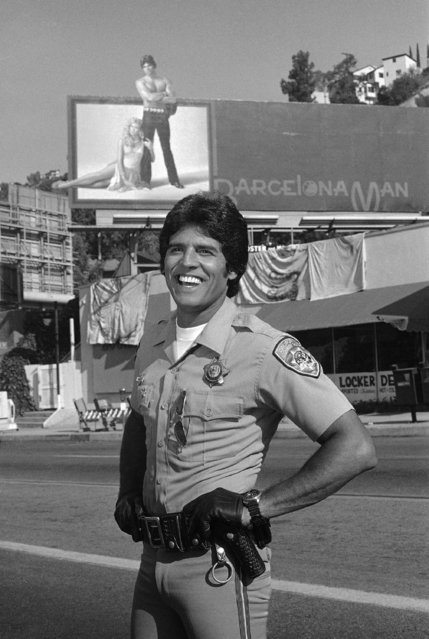 Erik Estrada, star of the television series “Chips”, is all smiles in Los Angeles September 3, 1982 as he stands in front of a billboard for which he modeled a pair of jeans. The advertisement is part of an upcoming episode entitled “Tight Fit”. (Photo by Nick Ut/AP Photo) 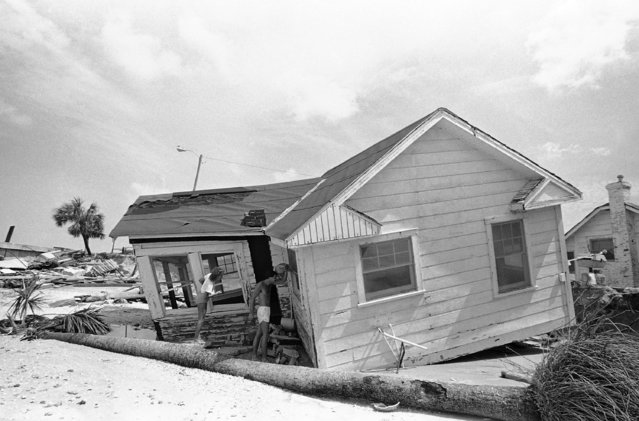