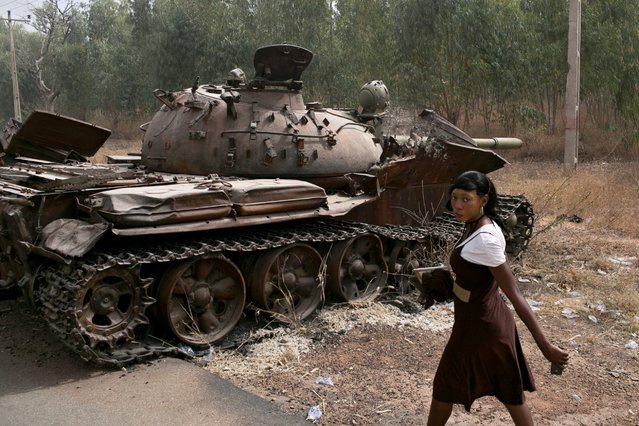 An abandoned tank left by Boko Haram, February 20, 2016, seen on the road to Michika, Nigeria – a town formerly occupied by the insurgents. On April 14, 2014, 300 schoolgirls in the Chibok village in Nigeria were kidnapped by the terrorist group, Boko Haram. Two years later, the majority of these girls are still missing. According to the Global Terrorism Index Report 2015, Boko Haram, which operates mainly in Nigeria, has become the most deadly terrorist group in the world. (Photo by Danielle Villasana) 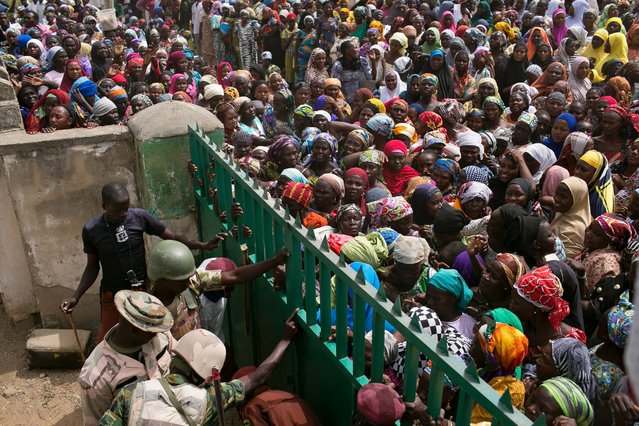 People in Michika, a town formerly occupied by Boko Haram, wait for a food distribution, February 20, 2016. In a report published by the United Nations World Food Programme, Denise Brown, WFP regional director for West Africa, states, “No one is untouched by the Boko Haram violence. Across the borders, farmers, fishermen, cross-border traders and herders have suffered significant losses. Crises involving refugees, displaced people, food and nutrition are converging on the poorest parts of West Africa”. (Photo by Danielle Villasana) 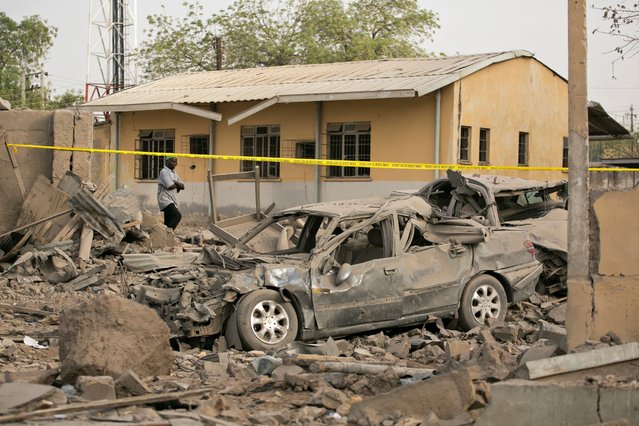 A man looks at a bomb blast site at the Jimeta Police Station in Yola. The Commissioner of Police in Adamawa, Mr. Mohammed Gazali, confirmed to reporters that the blast at the Jimeta Police Station was caused by bombs recovered from Boko Haram insurgents, according to Vanguard News in Nigeria. The Nigeria Emergency Management Agency confirmed four policemen were killed by the blast and an unspecified number of others were injured. (Photo by Danielle Villasana) 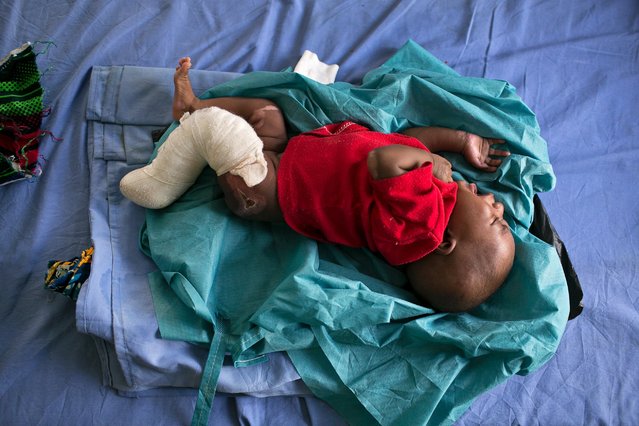 A 3-month old boy recovers from wounds sustained after a Boko Haram attack on the town of Dolori in Maiduguri's Borno State Specialist Hospital, February 27, 2016. The boy’s mother was killed in the same attack. (Photo by Danielle Villasana) 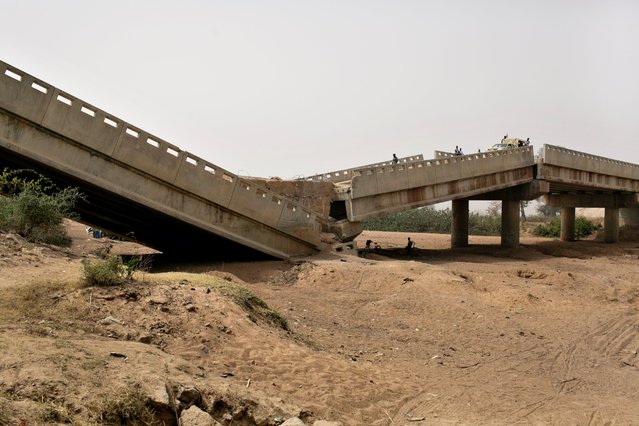 The Kudzum Bridge on the road to the village of Michika in northern Nigeria's Adamawa State was damaged, according to the Premium Times based in Nigeria, by Boko Haram while they occupied the territory to prevent the Nigerian military from advancing. Now liberated from Boko Haram, the bridge remains damaged, making it difficult for large shipment trucks to carry goods to villages in northern Nigeria, February 20, 2016. (Photo by Danielle Villasana) 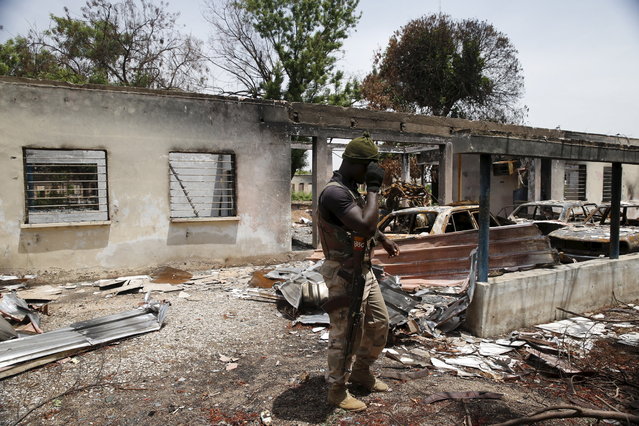 A soldier walks through a burnt building at the headquarters of Michika local government in Michika town, after the Nigerian military recaptured it from Boko Haram, in Adamawa state May 10, 2015. Boko Haram has said it wanted to revive the 19th century caliphate of Usman Dan Fodio, an Islamic scholar who threw off corrupt Hausa kings and established strict Sharia law. (Photo by Akintunde Akinleye/Reuters) 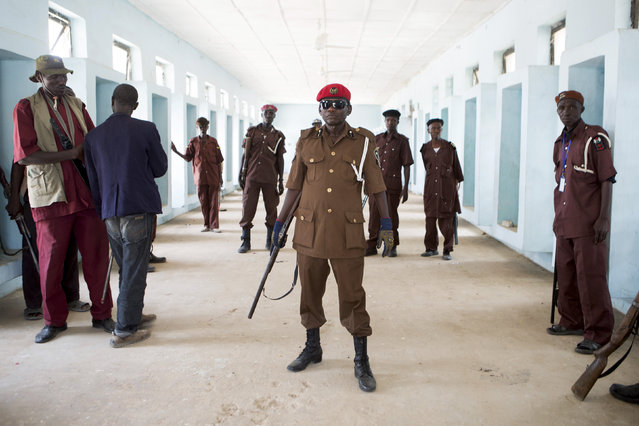 Members of a vigilante group of traditional hunters pose for a picture at their camp in Maiduguri May 21, 2014. About 100 traditional hunters from villages in Borno state gathered in a camp in Maiduguri and volunteered to hunt for Boko Haram to the local government. A lack of education and high youth unemployment has helped Boko Haram's Islamist ideology to thrive. (Photo by Joe Penney/Reuters) 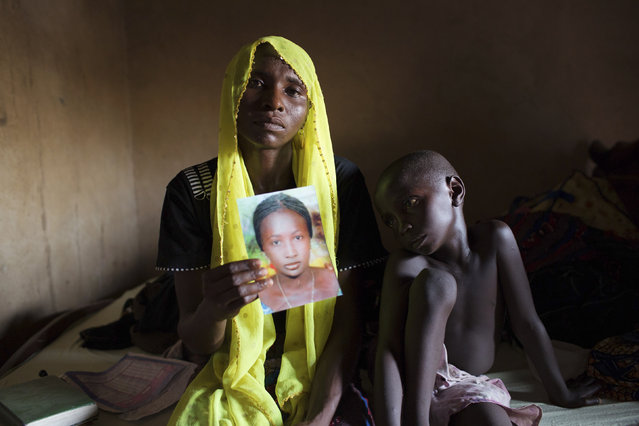 Rachel Daniel, 35, holds up a picture of her abducted daughter Rose Daniel, 17, as her son Bukar, 7, sits beside her at her home in Maiduguri May 21, 2014. Rose was abducted along with more than 250 of her classmates on April 14 by Boko Haram militants from a secondary school in Chibok, Borno state. (Photo by Joe Penney/Reuters) 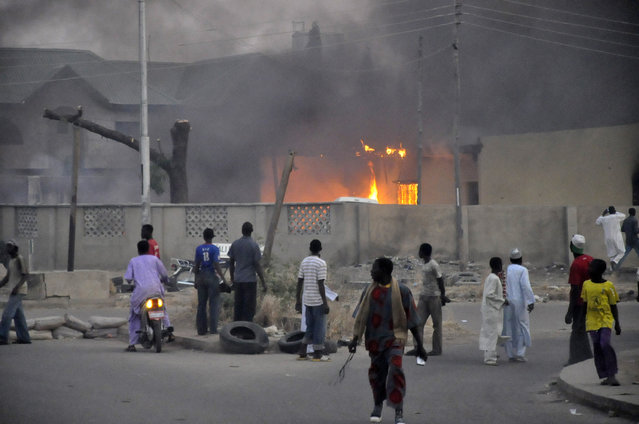 People watch as smoke rises from the police headquarters after it was hit by a blast in Nigeria's northern city of Kano January 20, 2012. Boko Haram has splintered into several factions, including some with ties to al Qaeda's Saharan wing. (Photo by Reuters/Stringer) 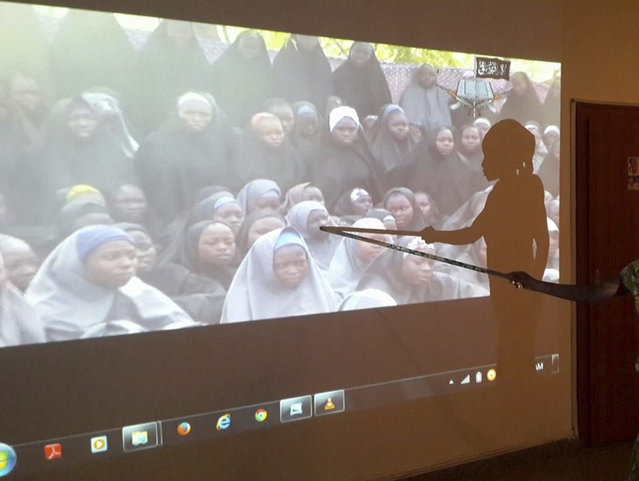 A student who escaped when Boko Haram rebels stormed a school and abducted schoolgirls, identifies her schoolmates from a video released by the Islamist rebel group at the Government House in Maiduguri, Borno State May 15, 2014. Boko Haram, a nickname which translates roughly as “Western education is sinful”, formed around a decade ago as a clerical movement opposed to Western influence. (Photo by Reuters/Stringer) 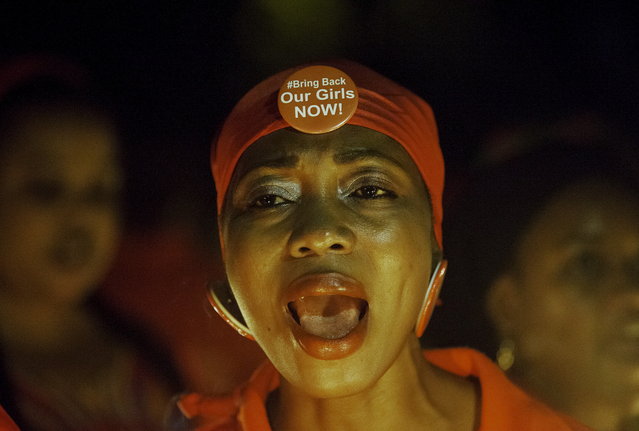 A woman participates in a vigil for the girls who were abducted from a secondary school in Chibok, on the anniversary of their abduction in Abuja April 14, 2015. (Photo by Afolabi Sotunde/Reuters) 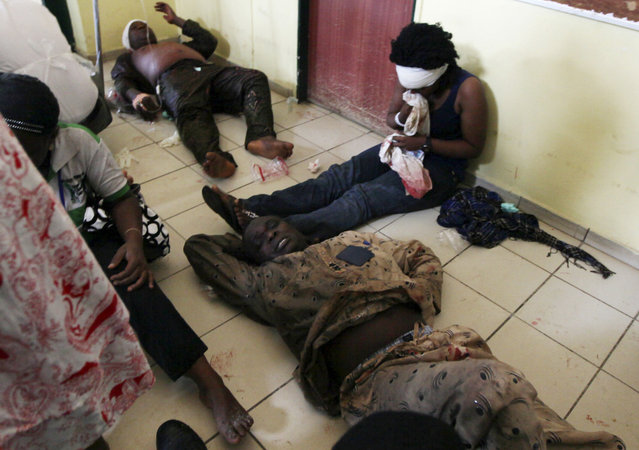 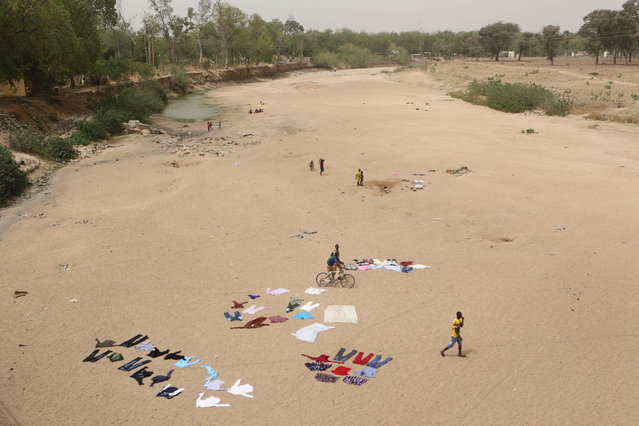 People wash clothes in a dry riverbed in Maroua, Cameroon, March 17, 2016. After watching its influence spread during a six-year campaign that has killed around 15,000 people according to the U.S. military, Nigeria has now united with its neighbours to stamp out Boko Haram. An 8,700-strong regional force of troops from Benin, Cameroon, Chad, Niger, and Nigeria is seeking to finish the job. Outside Nigeria, Cameroon has been hardest hit by Boko Haram, which now operates out of bases in the Mandara Mountains, Sambisa Forest and Lake Chad. (Photo by Joe Penney/Reuters) 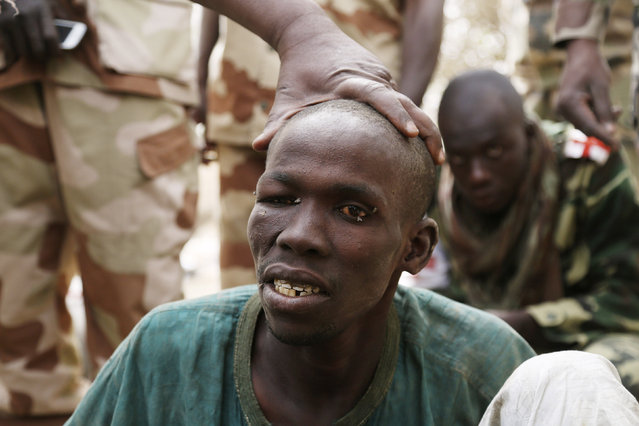 A man, whom the Chadian military say they have taken prisoner for belonging to insurgent group Boko Haram, is seen in Gambaru February 26, 2015. The Chadian military nicknamed the man “the Butcher”. He was accused of killing five people the way Boko Haram does, cutting their throat with a knife. (Photo by Emmanuel Braun/Reuters) 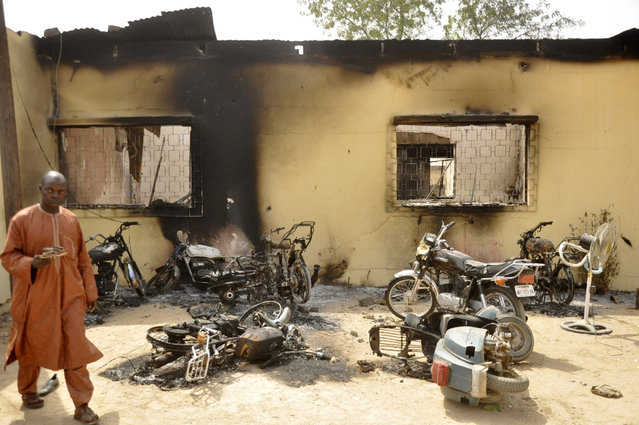 A man walks through the ruins of a zonal police headquarters after a bomb attack in Nigeria's northern city of Kano, January 21, 2012. Boko Haram militants have carried out multiple bombings and shootings since the secretive sect launched an uprising in 2009, including a coordinated strike on Kano that left 186 people dead. (Photo by Reuters/Stringer) 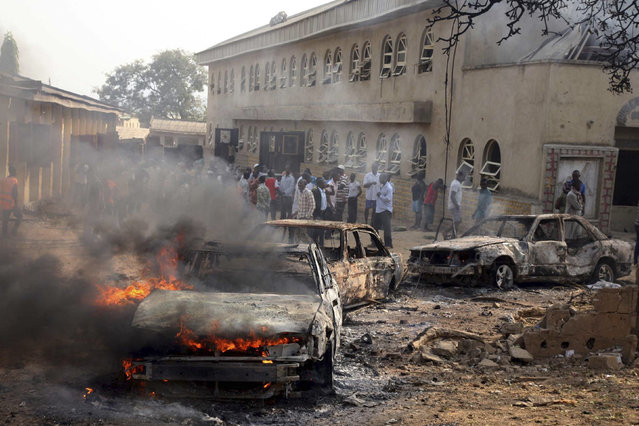 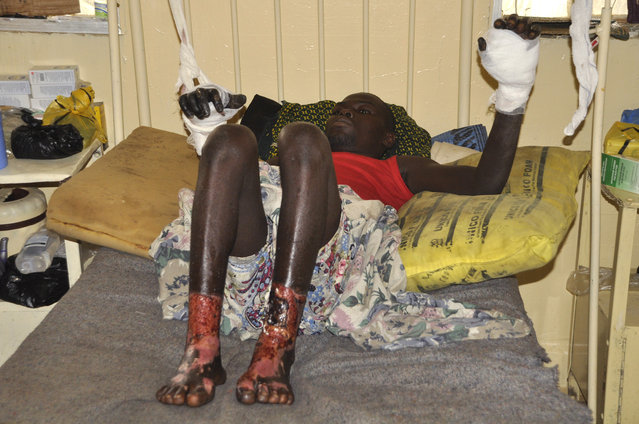 A victim of a bomb blast at a bus station is seen resting at a specialist hospital in Kano, February 25, 2015. Suicide bombers struck two bus stations in different parts of northern Nigeria in attacks President Goodluck Jonathan blamed on Boko Haram. (Photo by Reuters/Stringer) 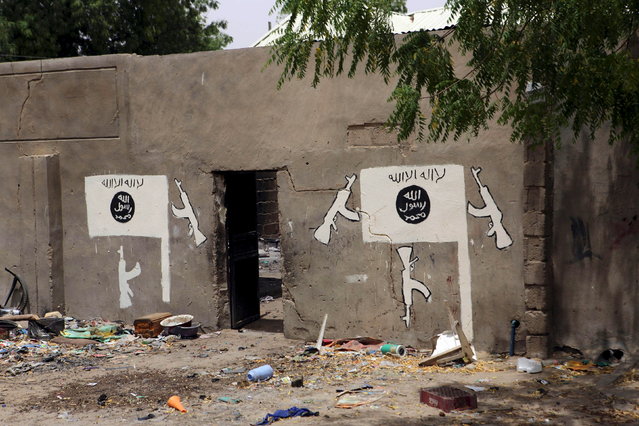 A wall painted by Boko Haram is pictured in Damasak March 24, 2015. Boko Haram militants kidnapped more than 400 women and children from the northern Nigerian town of Damasak that was freed by troops from Niger and Chad. (Photo by Joe Penney/Reuters) 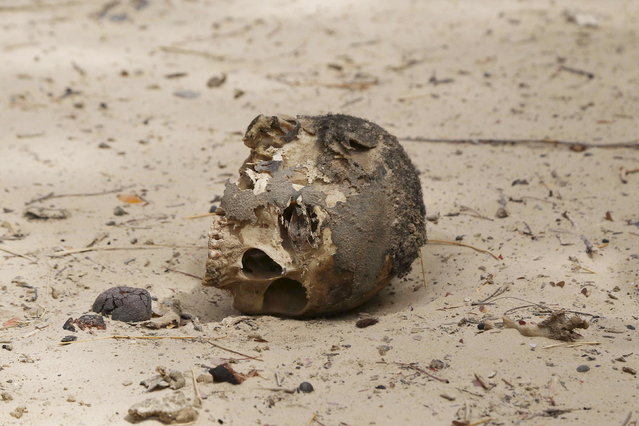 The skull of a decapitated man is seen at a mass grave in the recently retaken town of Damasak, Nigeria, March 20, 2015. Soldiers from Niger and Chad who liberated the Nigerian town of Damasak from Boko Haram militants discovered the bodies of at least 70 people, many with their throats slit, scattered under a bridge, a Reuters witness said. (Photo by Emmanuel Braun/Reuters)
Edit Del
22 Apr 2016 13:13:00, post received 0 comments
Publication archive:
←   →
Popular tags:
All tags
Last searches: