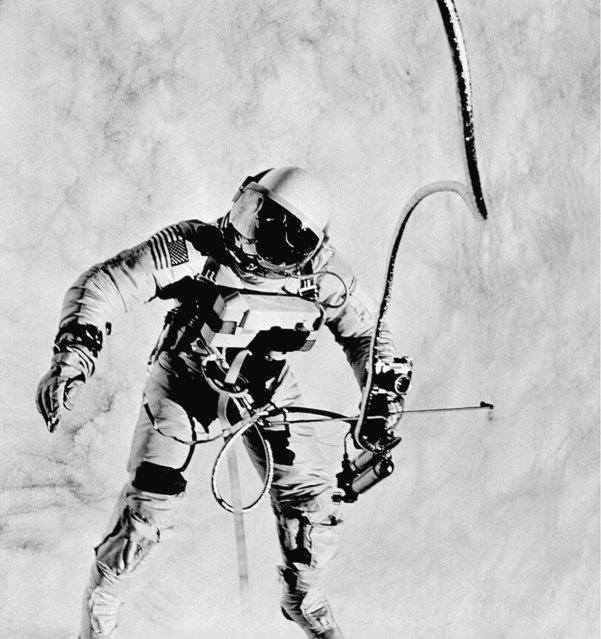 Astronaut Ed White faces the Gemini 4 capsule during his 20-minute space “walk” on June 8, 1965. In his right hand, White holds his oxygen space gun to maneuver around the capsule. A 35-mm camera is attached to the space gun. Astronaut James McDivitt took this photograph with a Hasselblad camera. (Photo by James McDivitt/AP Photo/NASA) 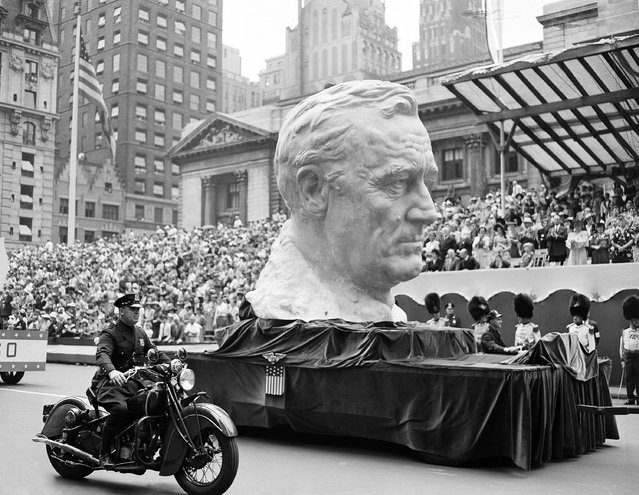 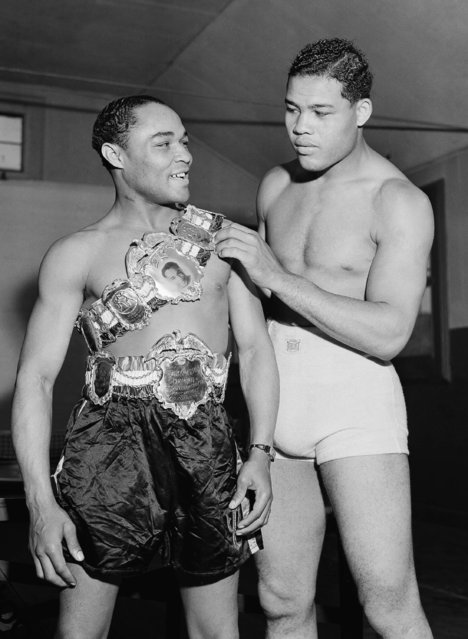 Joe Louis looks with envy at two awards that belong to Henry Armstrong, left, shown during their meeting at Pompton Lakes, N.J., June 13, 1938. One belt is for winning the the welterweight title from Barney Ross in 1937. The other belt is for Armstrong as the first boxer to wear three crowns at once. Louis, now training at Pompton Lakes for his Tony Galento fight for June 28, 1938. Louis as named “Ring” magazine's merit award as outstanding boxer of 1938. (Photo by AP Photo) 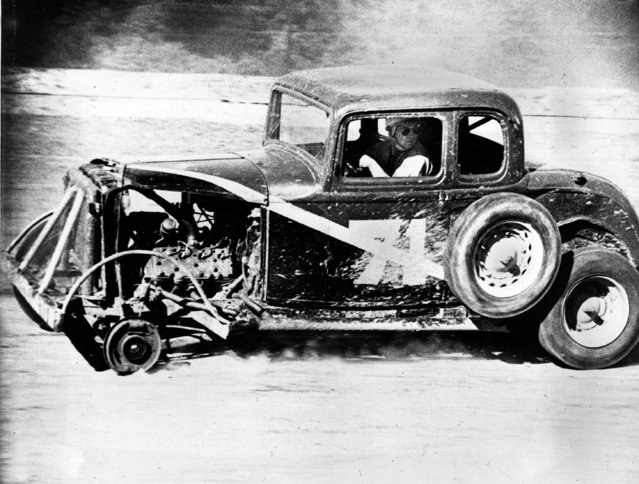 Walter Ragan, of Conowingo, Md., turns and watches his left front wheel fly by his stock car on the Mason-Dixon Raceway at Oxford, Pa., Saturday, June 14, 1952. The wheel separated from the brake drum as the car continued to move and Ragan pulled into the pits without difficulty. (Photo by AP Photo) 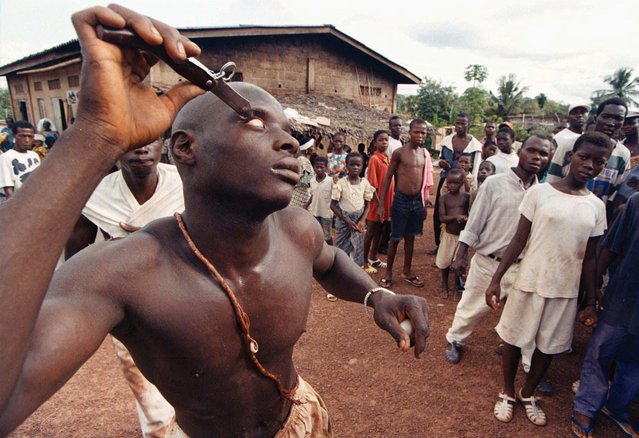 A young man forces the blade of a knife into his eye as a show of his mystical powers to the people in his village Badasso, Ivory Coast (50 miles north of the capital city Abidjan), Saturday, June 15, 1996. The Abidjis ethnic group hold an annual ceremony called “Dipris” to demonstrate their physical and mystical powers and to honor their ancestors who pass on these strengths from the dead. Beginning from early morning citizens of Badasso walk the streets in a trance like state. Men, who believe they are immune to pain and injury, plunge knives into their bodies and women writhe on the ground possessed by the spirits of their ancestors. (Photo by David Guttenfelder/AP Photo) 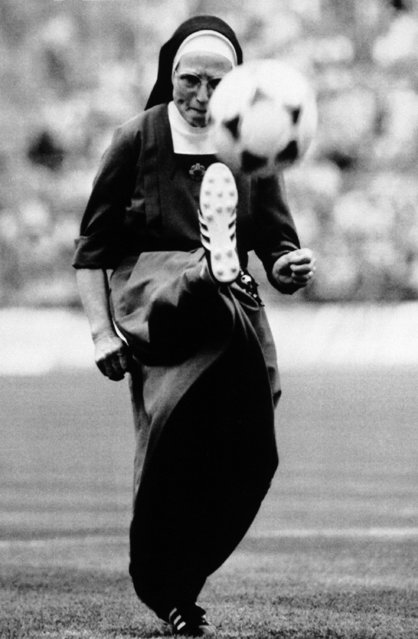 Catholic nun Sister Eadburga of the Franziskaner congregation in Kaiserlautern kicks the ball just prior to a soccer match between FC Bayern Munich and Vfl Bochum, at Munich's Olympic Stadium, June 17, 1989. (Photo by Uwe Lein/AP Photo) 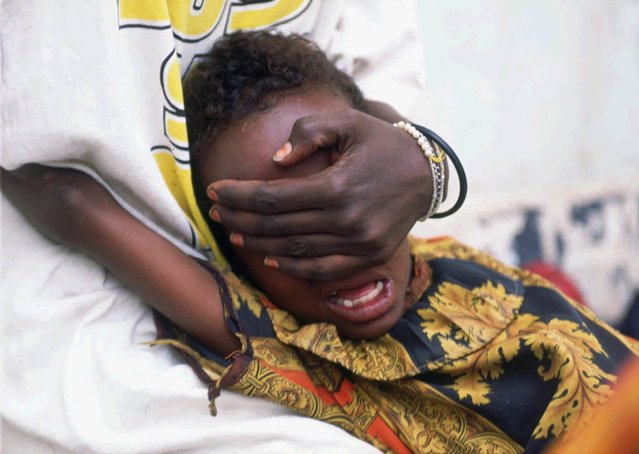 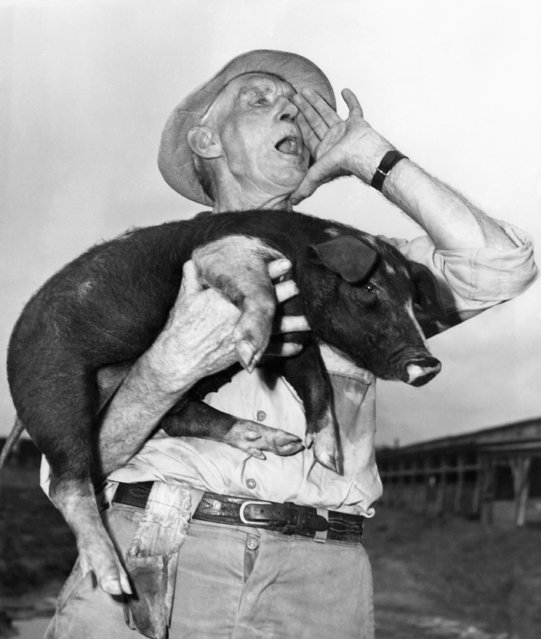 “Whoooooooooeeeee, pig, pig, pig” yells lusty-lunged Fred Shaw shown June 20, 1947, national hog-caller champion of Memphis, Tennessee for two years who has decided not to defend his title this year. His decision to retire was made following an exchange of bellows via transatlantic telephone with England's prize towncrier, James Morris, of Cornwell, England. (Photo by AP Photo/AWS) 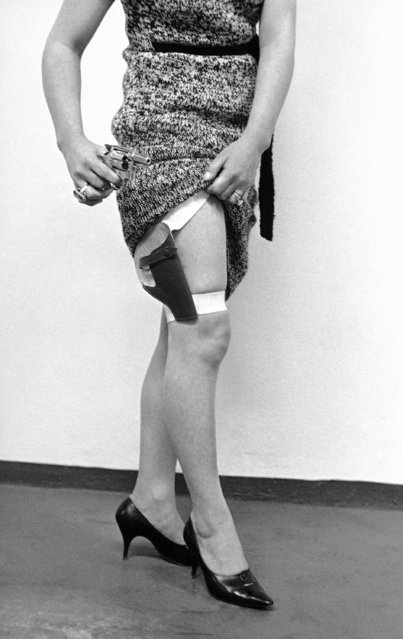 This new thigh holster for the gun-toting South African woman has replaced the bra holster, which was unpopular apparently because it changed the shape of their bust. Designed by South African housewife Mannie Laxton, the thigh holster, demonstrated June 20, 1965, sells for £2-5-OD, and is the new craze in a country where weekend pistol sessions among white women are almost as popular as bridge parties. (Photo by Dennis Lee Royle/AP Photo) 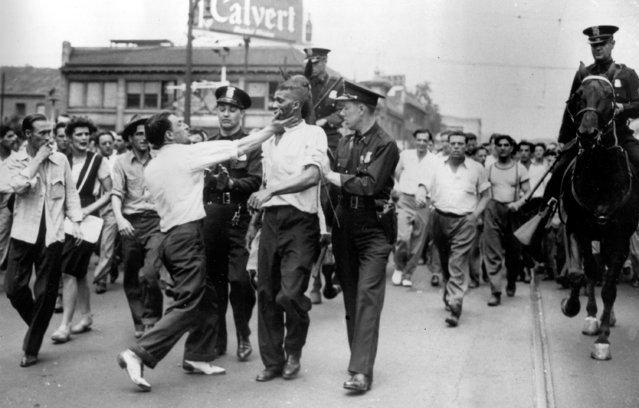 Sam Mitchell, a 46-year-old black janitor, is assaulted by George Miller as police escort Mitchell after he was shot in the stomach during rioting in the edge of the downtown area of Detroit, Mich., June 21, 1943. U.S. troops were called in when police were unable to stop the fighting. (Photo by AP Photo) 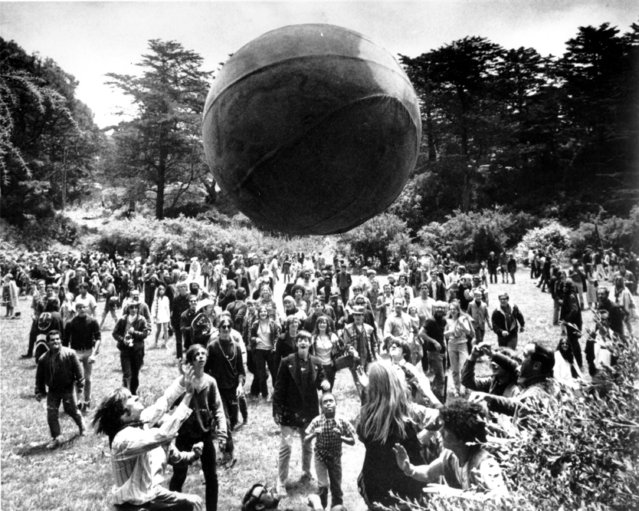 A crowd keeps a large ball, painted to represent a world globe, in the air during a gathering at Golden Gate Park in San Francisco, to celebrate the summer solstice on Thursday, June 21, 1967, day one of “Summer of Love”. If the Summer of Love established San Francisco as the hub of hippiedom, the summer of 2007 may one day be remembered as a time when the city and the rest of the country commemorated 1960s counterculture by taking the “counter” out of it. (Photo by AP Photo) 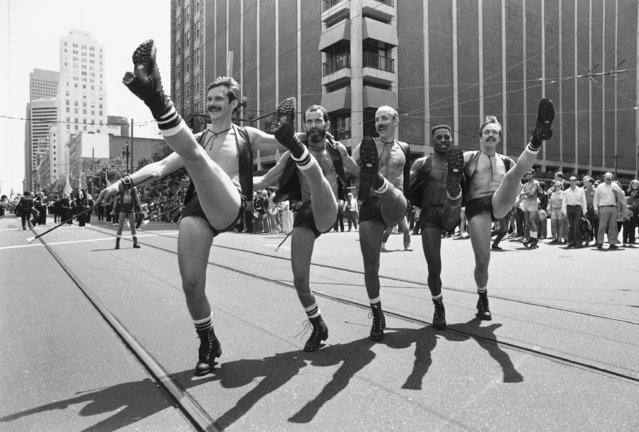 Members of the San Francisco Gay Freedom Day Marching Band and Twirling Corps do their thing down San Francisco's Market Street, June 27, 1982. Police estimate the crowd to be 300,000 for the Lesbian/Gay Freedom Day parade and rally. (Photo by Carl Viti/AP Photo) 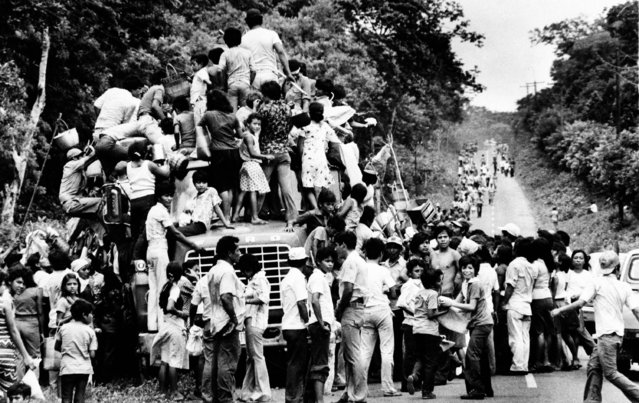 Hoards of people mob a truck loaded with food Friday June 29, 1979 on one of the backroads leading to Managua, Nicaragua. Food is becoming very scarce as the war continues between the Sandinista guerrillas and Nicaraguan National Guard. (Photo by AP Photo) 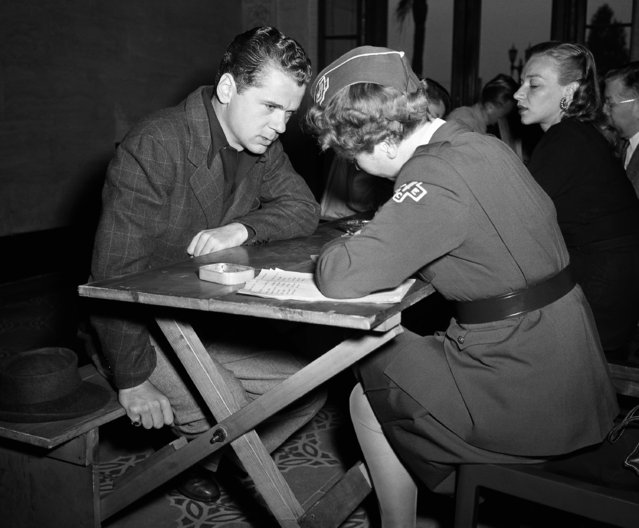 Among the estimated 3,000,000 youths between the ages of 18 and 20 who registered in the selective service enrollment was film actor Jackie Cooper,19, who was registered on June 30, 1942 at Beverly Hills, Calif., by Hetty Vorhaus, a member of the Woman's Emergency Corps. (Photo by Ira W. Guldner/AP Photo) 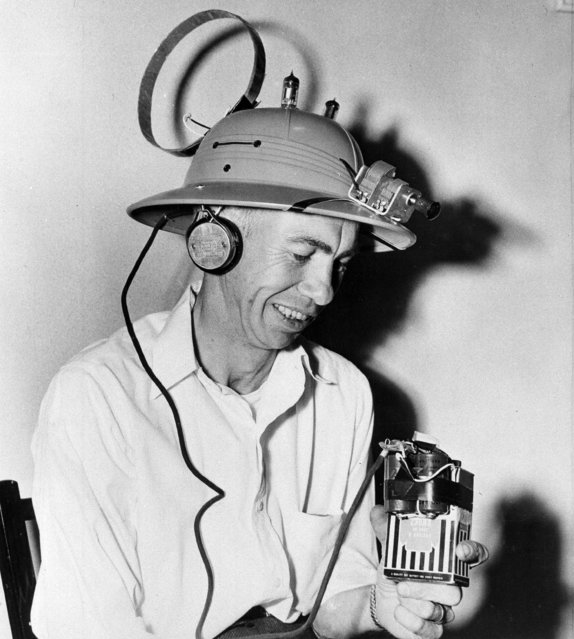 Frank W. Elmore, an electrician, wears a hat radio on his head in Spokane, Wash., May 24, 1952. The dial is in the front as tubes that look like horns stick up on top. The circular object in the back is the aerial antenna. A pocket battery, earphones and some other equipment inside the helmet do the rest. “It's just the thing for a gardener”, says Elmore. His hat can tune in all the local stations. (Photo by AP Photo) 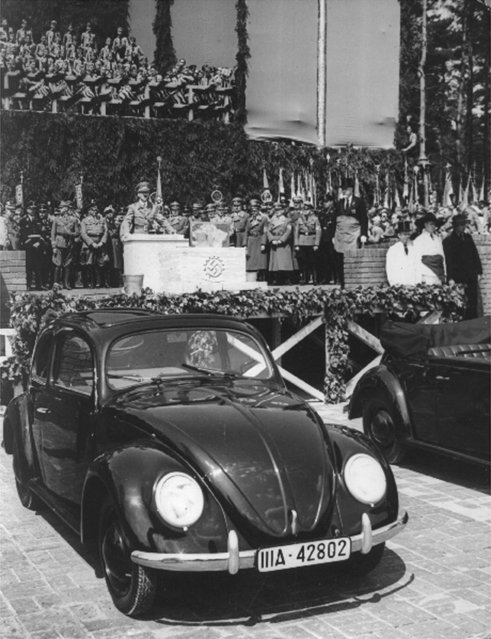 Fallersleben near Hannover, Germany, May 26, 1938. After a speech of Adolf Hitler, the Fuehrer, laid the cornerstone for the giant automobile-works-to-be which are to turn out the cheap peoples car-supposed to be the cheapest car of the world. Photo shows Hitler during his speech. Second at right of him is Dr. Porsche, the constructor of the Volkswagen, first models of which can be seen in the foreground. (Photo by AP Photo) 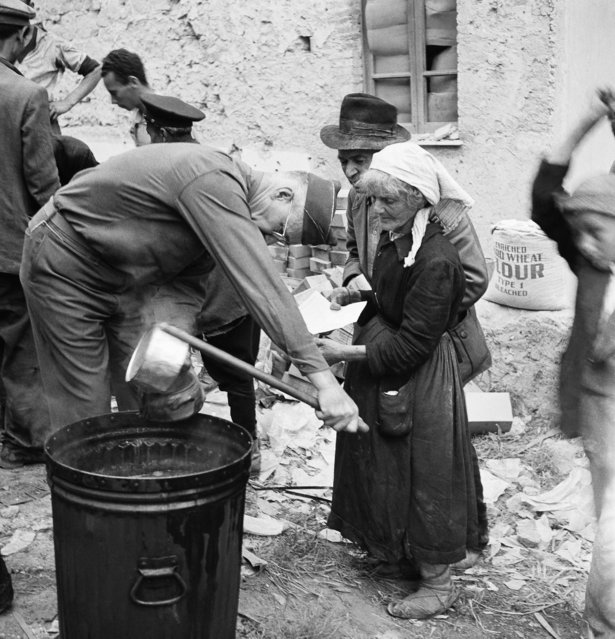 Italian refugees in Minturno receive food from the Allied Military Government kitchen, after the Allied got control of the town, May 31, 1944. For many it was their first hot meal in weeks. (Photo by Henry L. Griffin/AP Photo) 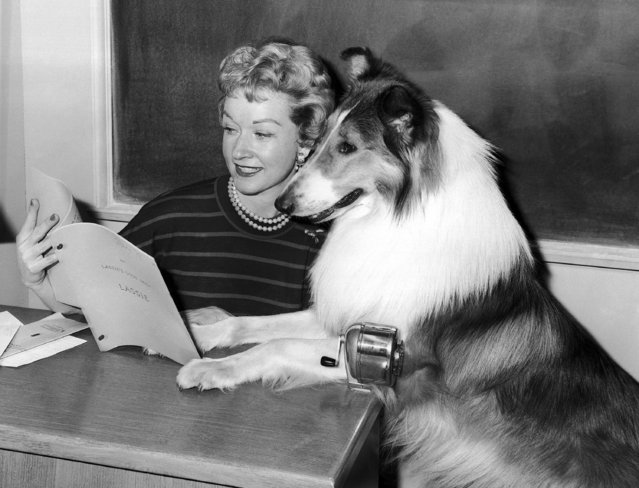 Bonita Granville Wrather, associate producer of the “Lassie” series being taped in Hollywood, and Lassie look over the script, May 31, 1962. (Photo by AP Photo) 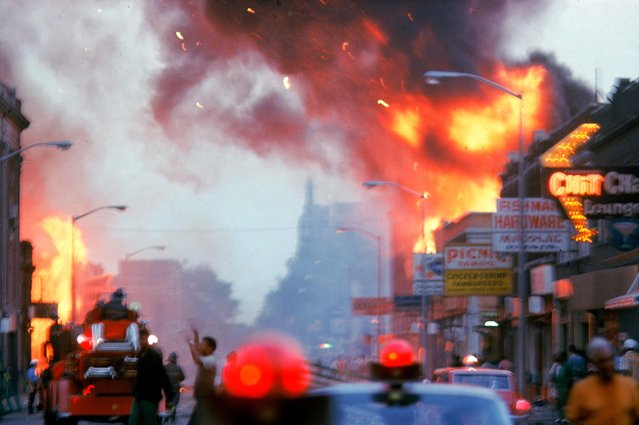 View along a street where buildings burn on both sides during riots in Detroit, Michigan, late July 1967. Police and firefighters are visible on the street. (Photo by Declan Haun/The LIFE Picture Collection/Getty Images) 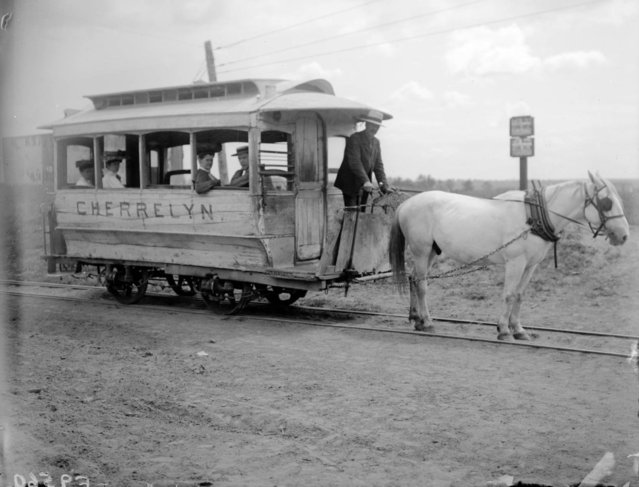 A horse pulls the Cherrelyn Gravity and Broncho Street Railway horse car uphill towards Cherrelyn, (Englewood) Arapahoe County, Colorado from the South Broadway trolley connection at Orchard Place between 1905 and 1910. John Bogue, (conductor, driver and lessee) steers the car as passengers look out the open windows. “Cherrelyn” is painted on side of the weathered car and the horse has a harness and blinders. (Photo courtesy of Denver Public Library Western History/Genealogy Dept.)
Edit Del
11 Aug 2017 07:27:00, post received 0 comments
Publication archive:
←   →
Popular tags:
All tags
Last searches: