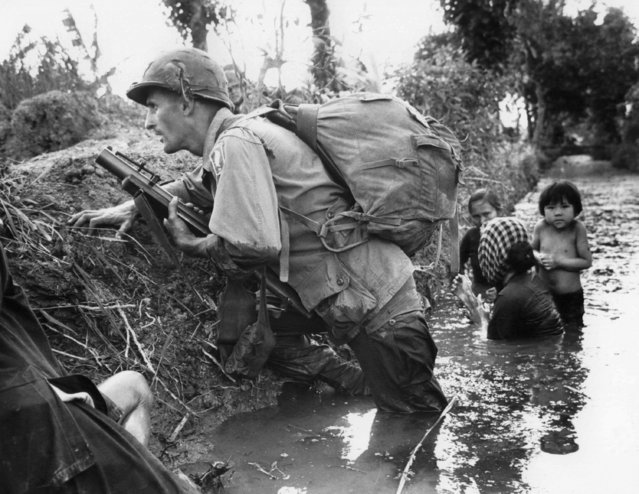 In this January 1, 1966 file photo, a Paratrooper of the 173rd U.S. Airborne brigade crouches with women and children in a muddy canal as intense Viet Cong sniper fire temporarily pins down his unit during the Vietnamese War near Bao trai in Vietnam. Filmmaker Ken Burns said he hopes his 10-part documentary about the War, which begins Sept. 17, 2017 on PBS, could serve as sort of a vaccine against some problems that took root during the conflict, such as a lack of civil discourse in America. (Photo by Horst Faas/AP Photo) 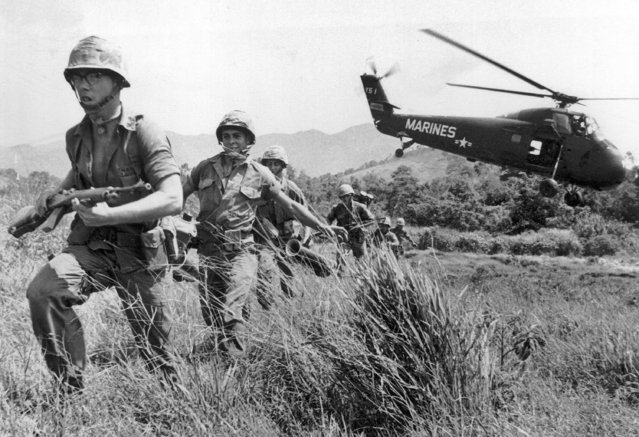 In this April 28, 1965 file photo, U.S. Marine infantry stream into a suspected Viet Cong village near Da Nang in Vietnam during the Vietnamese war. Filmmaker Ken Burns said he hopes his 10-part documentary about the War, which begins September 17, 2017 on PBS, could serve as sort of a vaccine against some problems that took root during the conflict, such as a lack of civil discourse in America. (Photo by Eddie Adams/AP Photo) 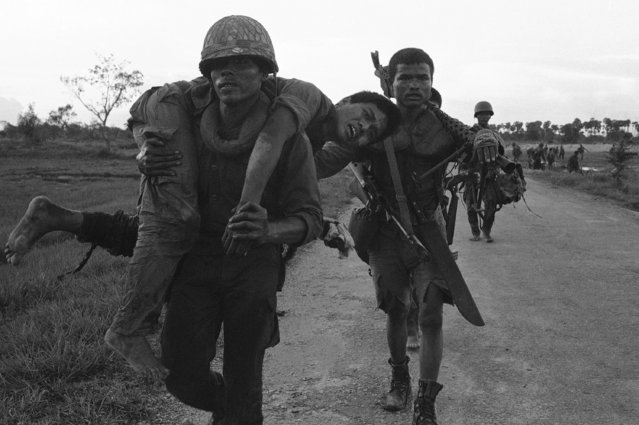 A wounded Cambodian trooper grimaces in pain as a buddy carries him to a medic station on RTE 5, an embattled highway northwest of Phnom Penh, Cambodia on July 6, 1973. Government forces engaged entrenched Khmer rebels about 40 miles from the Cambodian capital. (Photo by Chhor Yuthy/AP Photo) 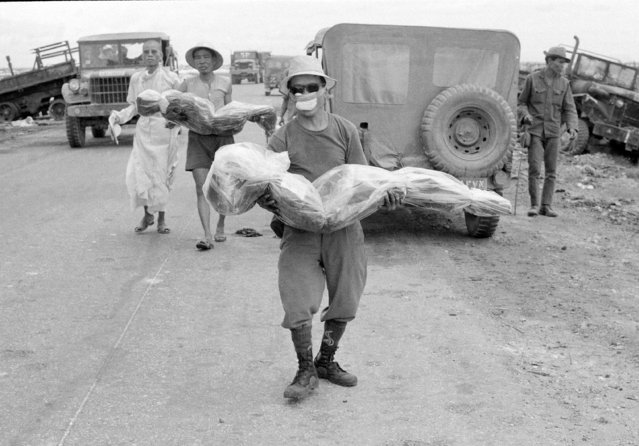 Civilians carry bodies of relatives, July 11, 1972, killed in an ambush along Route 1, south of Quang Tri, Vietnam, two months ago. A Buddhist priest accompanies them here to a simple grave along roadside. (Photo by AP Photo) 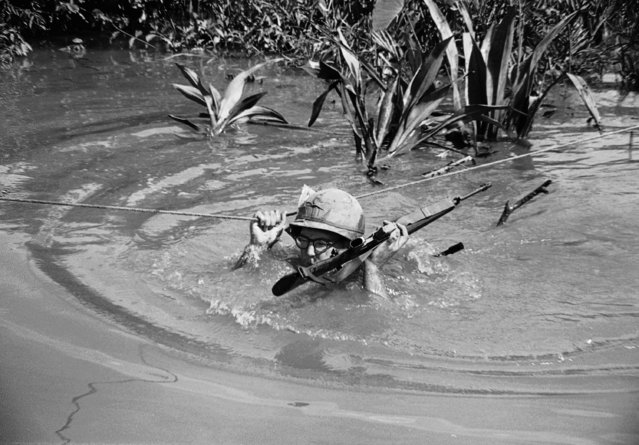 Trooper of the U.S. 1st division uses one hand to hang on to rope and the other to hold his M16 above the water as he is pulled across a stream in an area his unit was patrolling about 10 miles east of Saigon on July 15, 1968. (Photo by AP Photo) 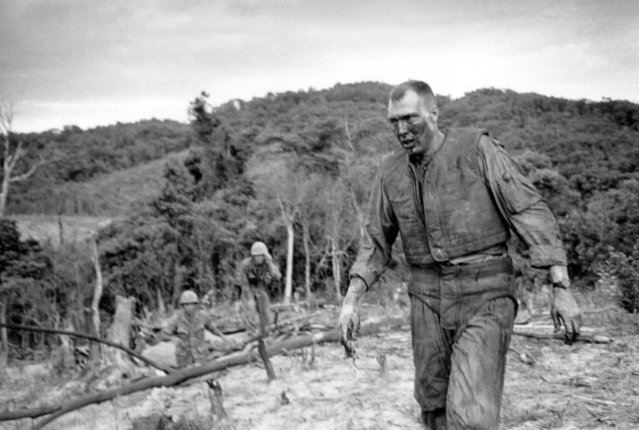 A stunned and burned gunner of a CH-46 Sea Knight helicopter walks from the jungle after being pinned down by enemy fire following the crash of his chopper in the bivouac area of a U.S. Marine unit about one mile (2000 meters) south of the Demilitarized Zone (DMZ), July 15, 1966. Troops had to fight off Viet Cong snipers before the wounded gunner could emerge from the cover of the brush. Two others survived, but 13 were reported dead in the crash and subsequent fire. (Photo by Horst Faas/AP Photo) 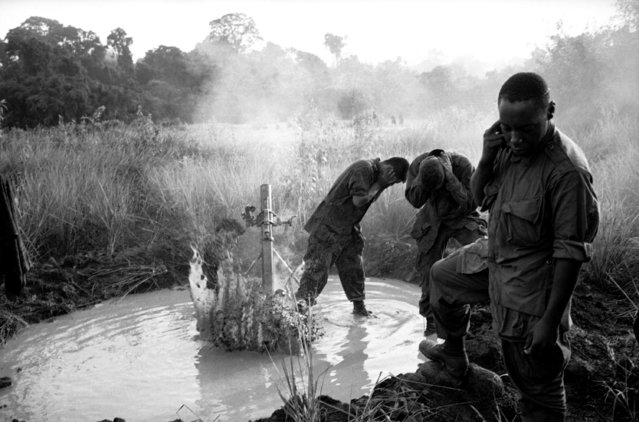 Muddy water in 81mm mortar emplacement filled by monsoon rains splashes over GI's as they fire a round toward a suspected Viet Cong position during an operation about 35 miles southeast of Saigon in Vietnam on July 21, 1966. (Photo by AP Photo) 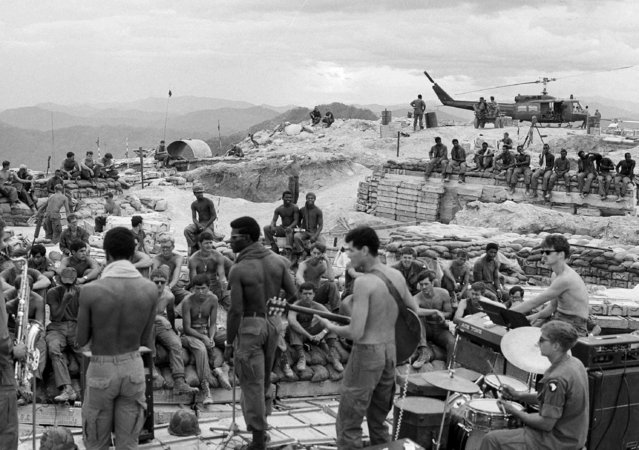 GIs of Firebase Catherine, the Third Brigade of the U.S. 101st Division, go into a rock session as they are surrounded by symbols of the war – wooden bunkers, helicopter and sandbags – in South Vietnam, July 21, 1970. They are dug in on a hill south of the demilitarized zone in the northernmost portion of the country. (Photo by Giancarlo Meyer/AP Photo) 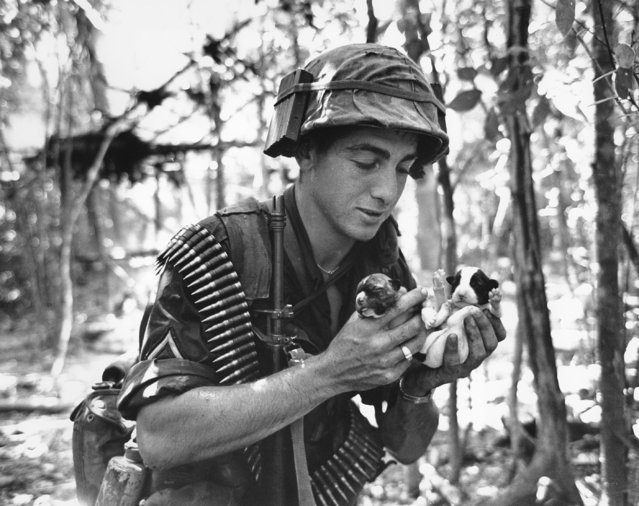 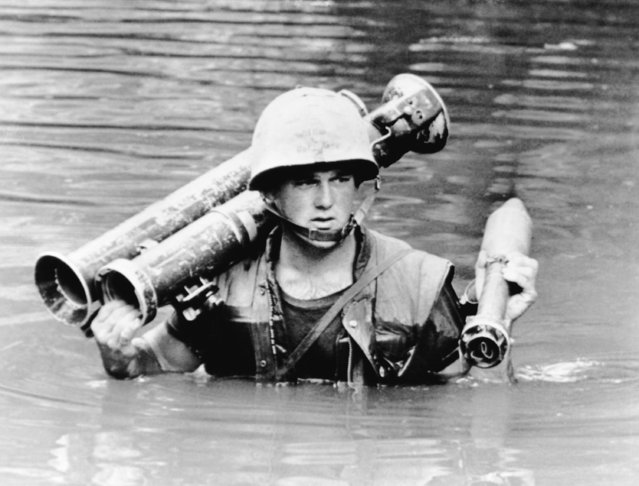 A U.S. marine carries a 3.5 inch rocket launcher and ammunition through a monsoon swollen creek in South Vietnam, October 14, 1966. The 2nd battalion of the 5th marines was patrolling the Jungle Mountains south of the demilitarized zone. (Photo by AP Photo/Merron) 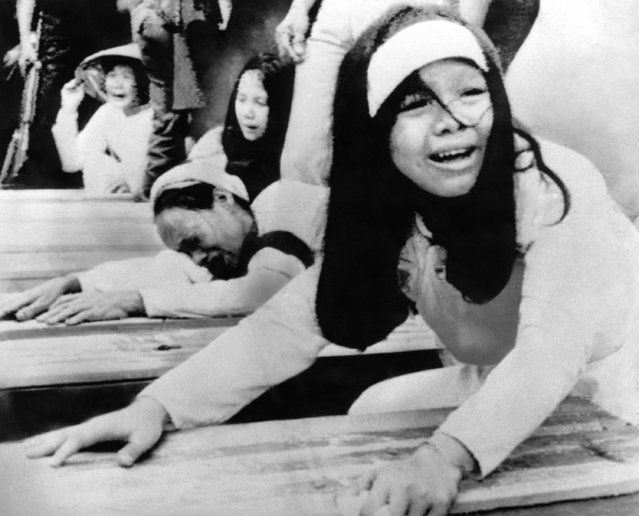 Women cry over coffins during a mass funeral in Hue, South Vietnam, on October 14, 1969, for 400 victims of enemy massacres at Hue. The skeletons were found last mouth along a creek bank at Nam Hoa, just a few miles outside Hue, where the victims were seized when North Vietnamese and Viet Cong troops held the city during February 1968. (Photo by Willis Johnson/AP Photo) 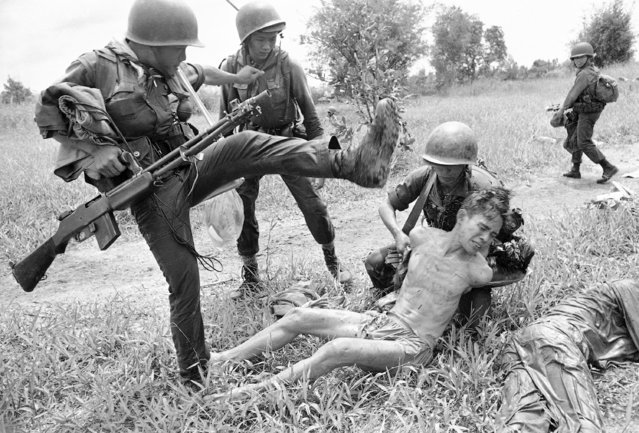 A suspected Vietcong is kicked by a Vietnamese soldier holding a rifle as another soldier attempts to tie his hands on October 22, 1965. The prisoner was one of 15 captured October 21 near Xom Chua when government troops raided in the plain of reeds area. Troops killed 43 suspected Vietcong and seized some arms. (Photo by Richard Merron/AP Photo) 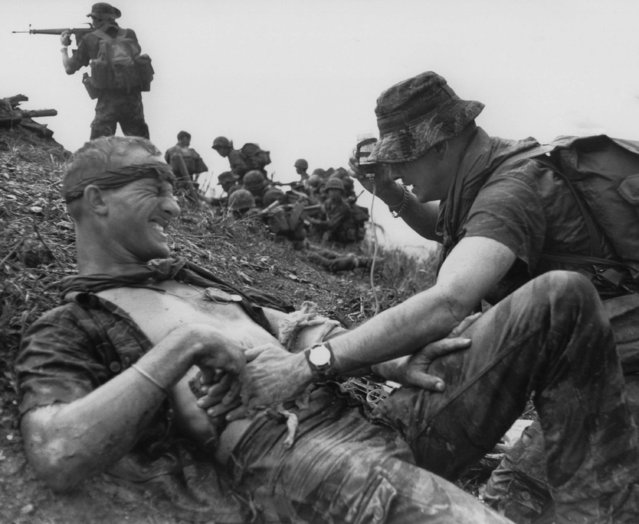 South Vietnamese and Montagnard troops attack in an uphill battle near Ha Thanh, some 325 miles northeast of Saigon, September 2, 1968, as an American medic attends a wounded U.S. Special Forces soldier. The GI was wounded during the battle as an Allied strike force sought to retake an outpost which had been overrun by the Viet Cong on Friday. The strike force retook the outpost. (Photo by AP Photo) 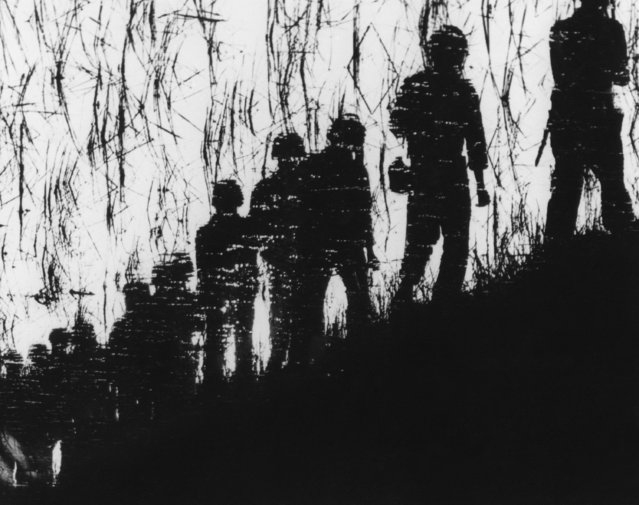 Vietnamese marines on patrol in Long An province, South Vietnam, are shown in reflection on water as they march along a dike at dawn on September 20, 1964. (Photo by AP Photo) 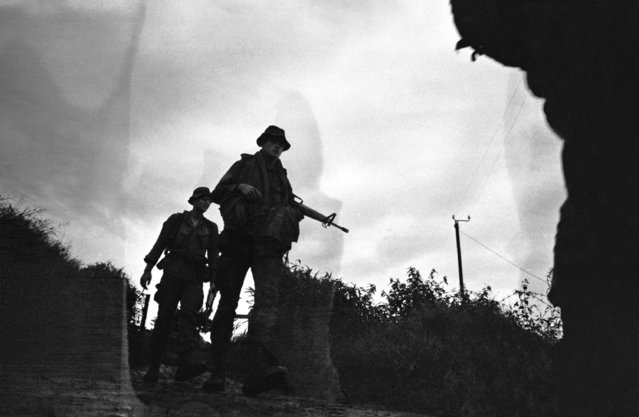 Two members of a hunter-killer team move out from their day base near the Ong Que Rubber Plantation to set up a night ambush for the enemy, September 23, 1969. The GIs are members of Charlie Company, 2nd Battalion, 199th Infantry Brigade, based at Xuan Loc, 45 miles northeast of Saigon. (Photo by AP Photo) 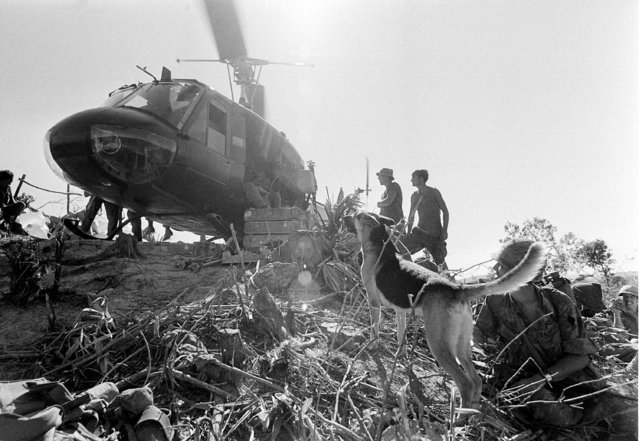