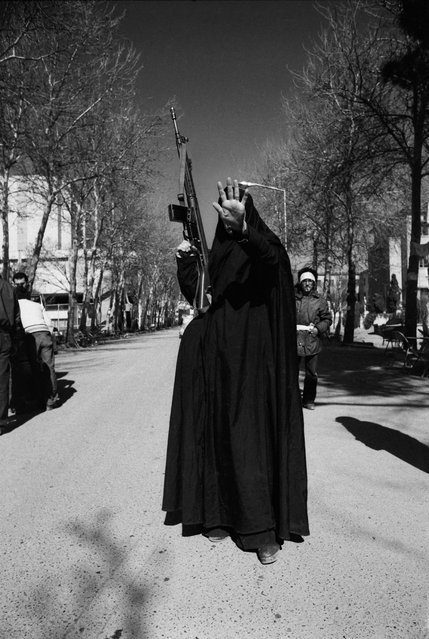 Tehran on February 12, 1979. A woman dressed in a black chador and carrying a G3 machine gun, holds up her hand in a gesture of defiance to the camera. She is among the forces occupying Tehran University a day after the triumph of the Islamic Revolution, led by Ayatollah Khomeini. Kaveh Kazemi’s shots of the revolution launched his career. Iran: Year 38 is at Les Rencontres d’Arles photographic festival, 3 July-24 September. (Photo by Kaveh Kazemi/The Guardian) 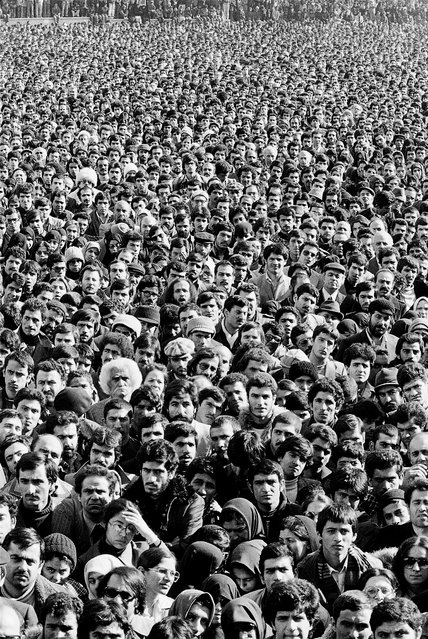 Re-opening of universities, Tehran, 14 January, 1979. Maryam Zandi was determined to capture the turmoil in her country and remembers the revolutionary protests as a time “when divisions were momentarily set aside”. At one point, having found no one to take care of her baby daughter, she carried the infant in her arms and asked people to hold her as she took photos. (Photo by Maryam Zandi/The Guardian) 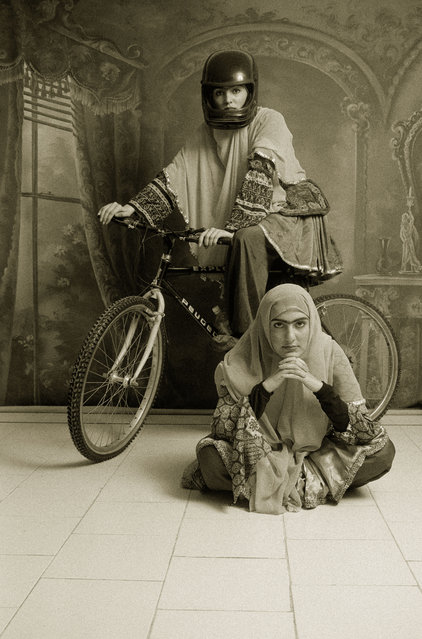 “From Qajar”, 1998. Shadi Ghadirian’s first series, Qajar, featured portraits of women with backdrops and dress drawn from the Qajar era (1785-1925). She then added contemporary western elements – a boombox, a Pepsi can or, in this case, a bike. (Photo by Shadi Ghadirian/The Guardian) 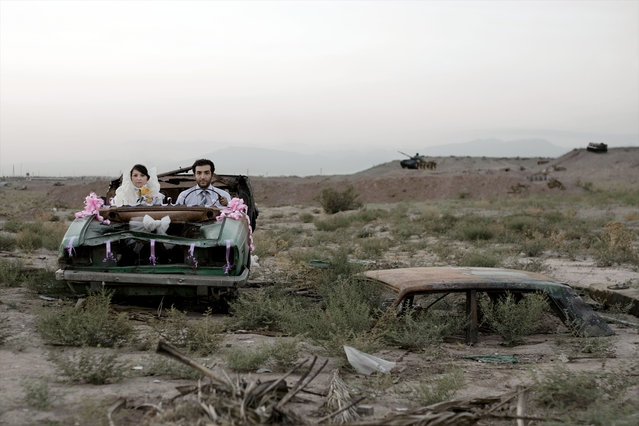 Modern Life and War series, 2008. Gohar Dashti’s series is about war and its legacy. The images combine two elements: intimate scenes of everyday life and something bearing the signs of conflict. (Photo by Gohar Dashti/The Guardian) 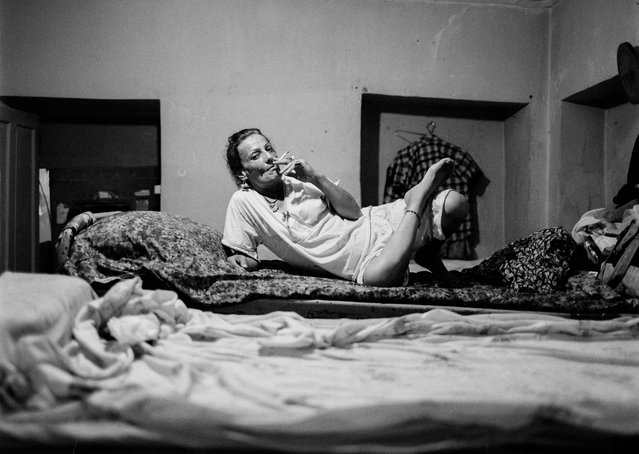 Grape Garden Alley series, 2008-2011. Grape Garden Alley is a government-run shelter for women of various ages from all over Tehran. Most are substance abusers, the rest are homeless. Living there doesn’t keep them from sleeping on cold park benches or wandering the streets. (Photo by Tahmineh Monzavi/The Guardian) 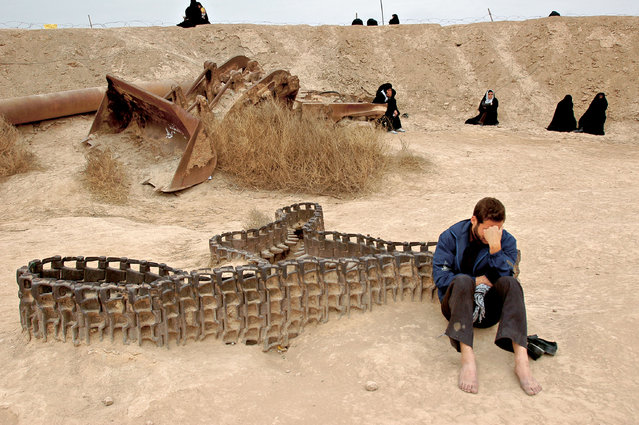 L’Ombre de la Terre, Talaiye, near the Iraq border, 23 March, 2008. Every March, for the new year, hundreds of thousands of Iranian people visit the many frontlines of the war against Iraq. This trip through the whole country, called Rahian-e Noor or the Caravan of Light, is for people who may have lost someone to pay their respects at places where fighting occurred. This shot was taken by Abbas Kiarostami, the acclaimed Iranian film-maker who died in 2016. (Photo by Abbas Kiarostami/The Guardian) 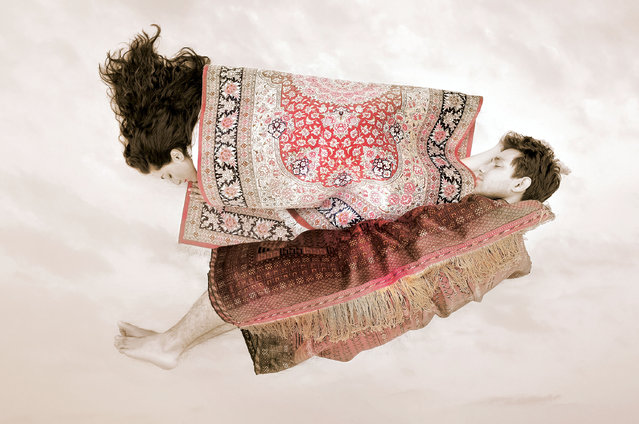 La Sortie de Shirin et Farhad / The Exit of Shirin and Farhad series, 2012. The title of Babak Kazemi’s series is taken from an old Persian legend about two lovers. Farhad kills himself after being tricked into believing Shirin is dead. The series was intended to show how difficult it is for couples in Iran today to express love freely. (Photo by Babak Kazemi/The Guardian) 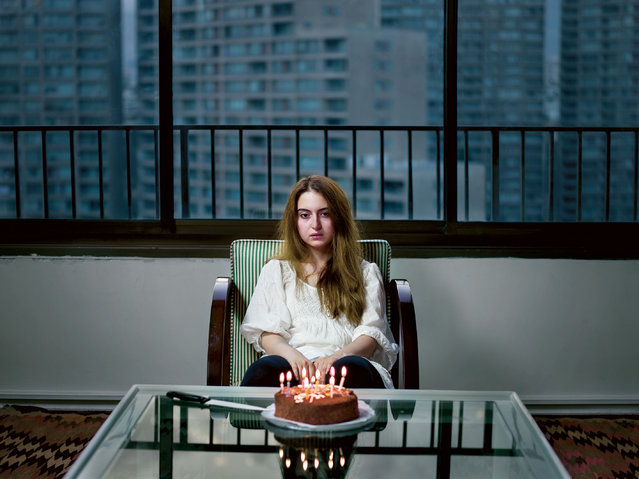 Regard (Looking) series, 2012-13. Newsha Tavakolian says this project arose from a “desire to look at the lives of my neighbours, whom I’ve known for more than 10 years. I wanted to tell the story of middle-class young people struggling against conformity and isolation – and to show their lack of trust in the future”. (Photo by Newsha Tavakolian/The Guardian)

Eyewitness series, Tehran, 2012. Azadeh Akhlaghi reconstructs the deaths of some of Iran’s leading figures, including politicians, journalists and intellectuals, who campaigned against the regime, often paying with their lives. This scene re-enacts the final moments of Forough Farrokhzad in February 1967. The poet swerved her car to avoid hitting a group of schoolchildren, then crashed into a stone wall. She was 32. (Photo by Azadeh Akhlaghi/The Guardian) 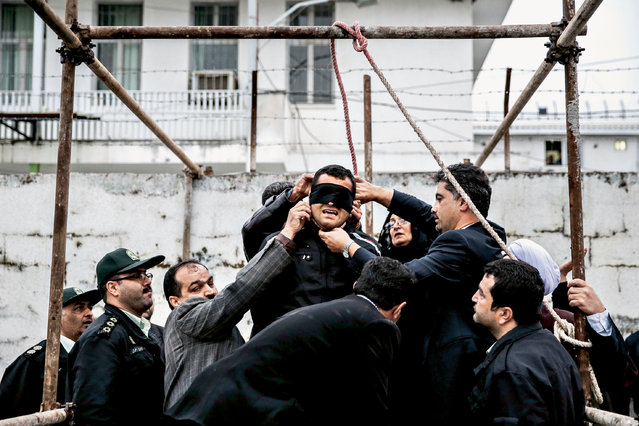 Geste de Pardon / Forgiveness Gesture series, 2014. In Iran, hangings generally take place in public. The family of a murder victim can participate in the execution by pushing the guilty person’s chair away. In 2014, a young man called Balal was deemed responsible for stabbing Abdollah Hosseinzadeh to death in a street fight. Instead of pushing the chair, Hosseinzadeh’s mother slapped Balal. This is a symbolic gesture of forgiveness and, in accordance with tradition, ended the execution. (Photo by Arash Khamooshi/The Guardian) 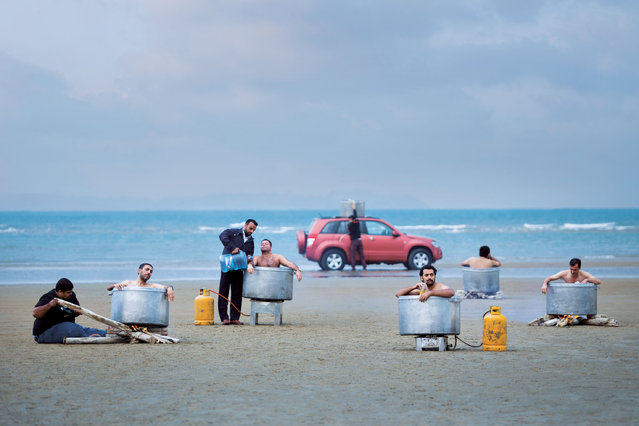