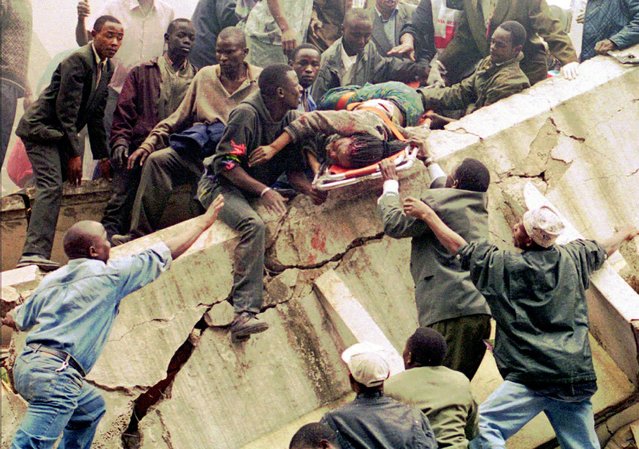 Rescue workers carry Susan Francisca Murianki, a U.S. Embassy office worker, over the rubble of a collapsed building next to the embassy, Friday, August 7, 1998 in Nairobi, Kenya. Terrorist bombs exploded minutes apart outside the U.S. embassies in the Kenyan and Tanzanian capitals Friday. Americans were among the dead, and the U.S. ambassador to Kenya was injured, the State Department said. More than 40 people were killed and 1,000 wounded in Nairobi alone. (Photo by Khalil Senosi/AP Photo) 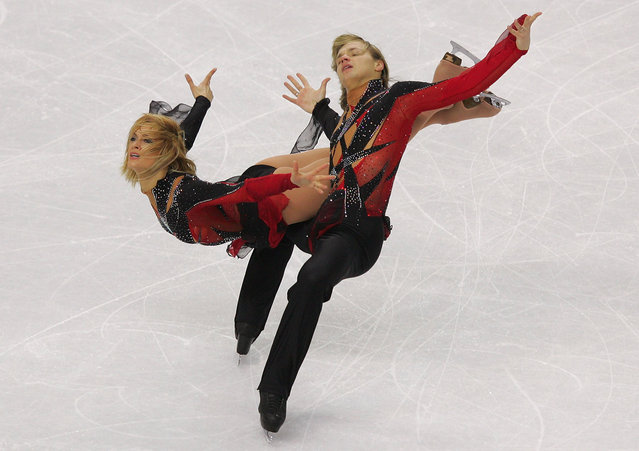 Isabelle Delobel and Olivier Schoenfelder of France perform during the Free Dance program of the figure skating during Day 10 of the Turin 2006 Winter Olympic Games on February 20, 2006 at Palavela in Turin, Italy. (Photo by Clive Rose/Getty Images)

Two young North Korean soldiers, one waving flowers given to him by friends, at the window of a train before leaving Kaesong on August 22, 1990 for Pyongyang, the North Korean capital. The soldiers had ended a tour of duty at Kaesong, which is near the border dividing North and South Korea. (Photo by Vincent Yu/AP Photo) 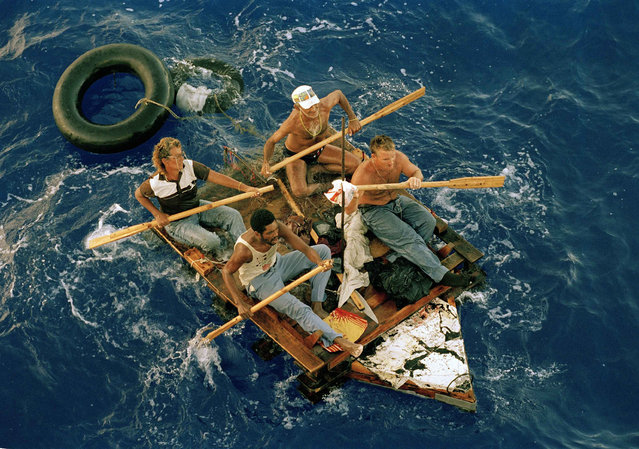 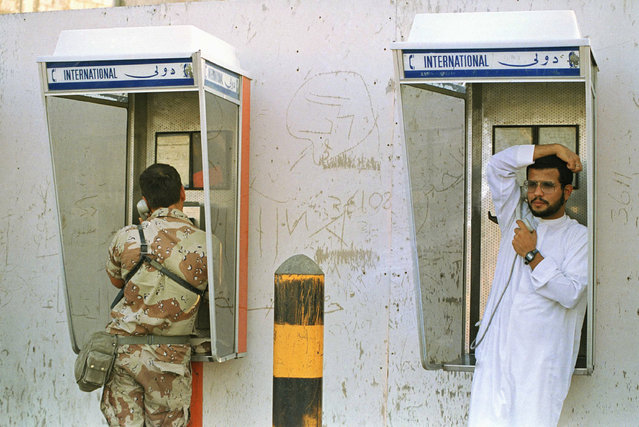 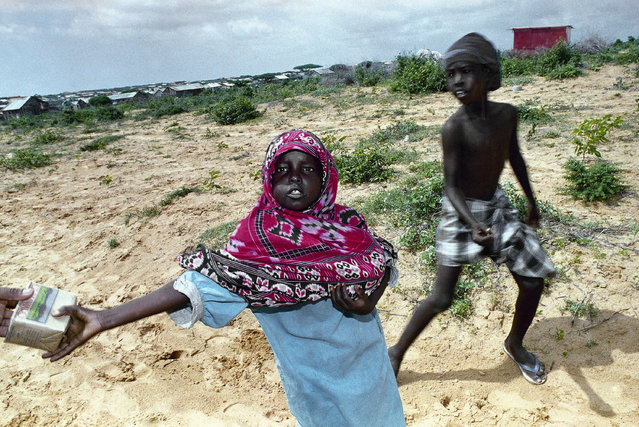 Children run asking for bottled water from a U.N. Pakistani Army truck in South Mogadishu on Sunday, December 12, 1993. One year after the U.N. peacekeepers arrival, the residents of the divided capital still depend upon outside aid for the provision of drinking water. (Photo by Ricardo Mazalan/AP Photo) 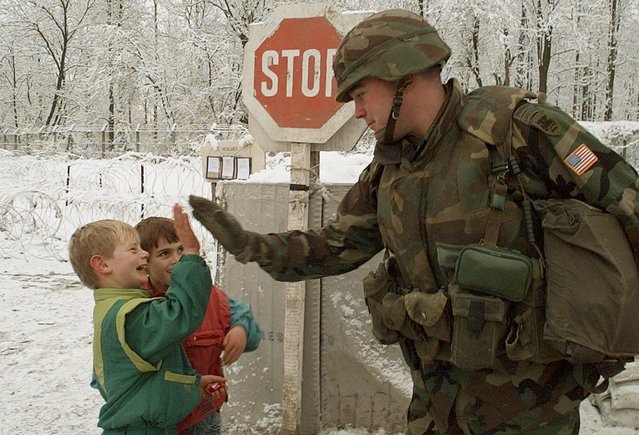 U.S. Army Lt. William Donovan, of Rumson, N.J., speads some holiday goodwill as he gives a high five to a Bosnian schoolboy outside the front gate of Tuzla Airbase, Friday, December 29, 1995. Soldiers stationed at the gates have become a major curiosity for local children. (Photo by John Gaps III/AP Photo) 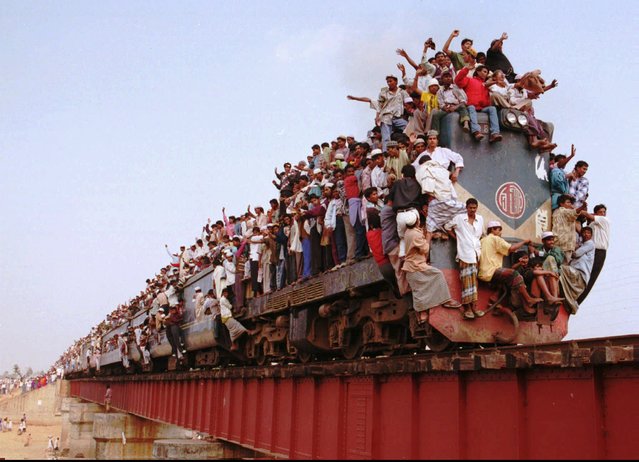 Thousands of Muslim pilgrims crowd a train in Tongi, 15 kilometers (10 miles) north of Dhaka, Monday, December 30, 1996 to return home after a three-day Islamic festival. At least two million Muslims prayed for the unity of the Islamic Ummah. (Photo by Pavel Rahman/AP Photo) 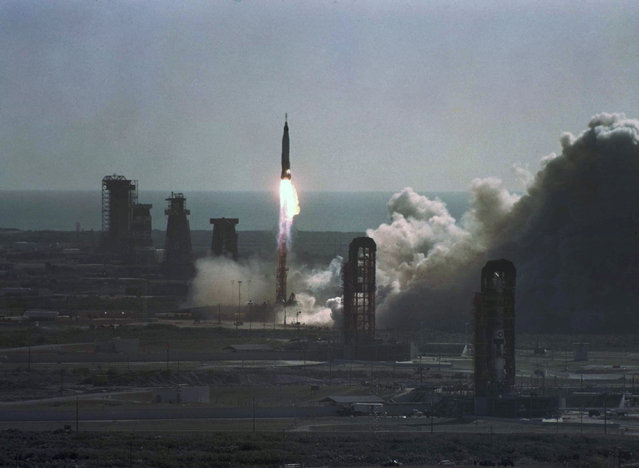 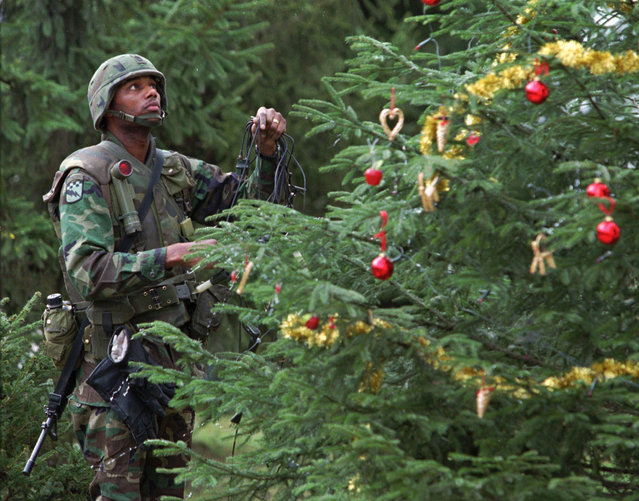 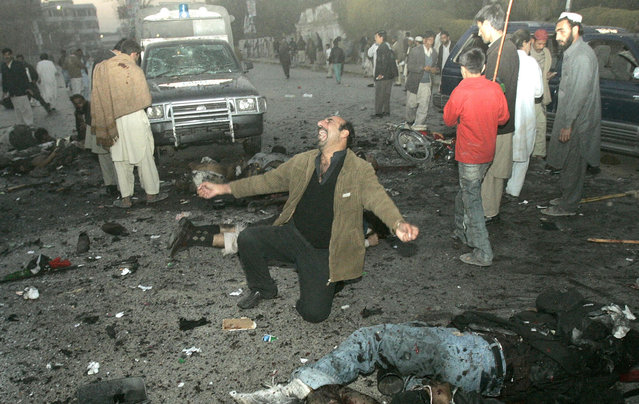 A supporter of Pakistan former Prime Minister Benazir Bhutto mourns deaths of his colleagues after a suicide attack in Rawalpindi, Pakistan, Thursday, December 27, 2007. Bhutto was assassinated Thursday in the attack that also killed at least 20 others during a campaign rally, aides said. (Photo by B.K.Bangash/AP Photo) 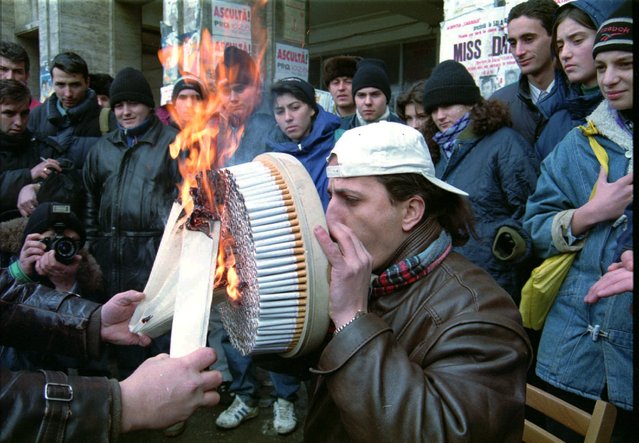 Stefan Sigmund, 29, from the Transylvanian city of Cluj, attempt to smoke 800 cigarettes through a self designed device in less than five minutes, in central Bucharest Tuesday, January 30, 1996, trying to enter the Guinness Book of Records. It is the last of his several attempts entering the record book which included eating 29 hard boiled eggs in four minutes and leaping into a lake from a height of 41 meters (135 feet) even if the Guinness Book of Records no longer rewards self damaging attempts. (Photo by AP Photo/Stringer) 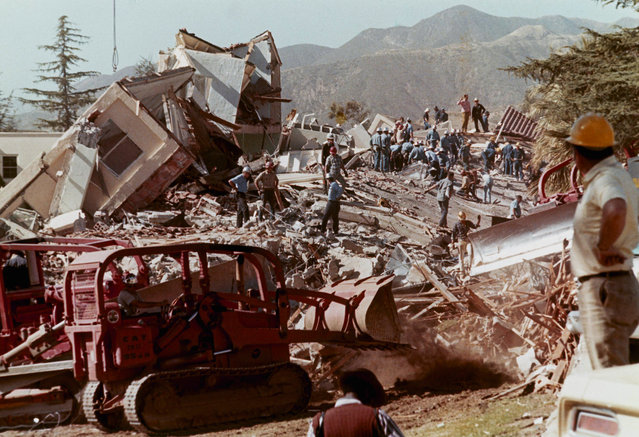 Workmen clear debris and rubble from collapsed buildings at the Veteran's Hospital in Sylmar, Calif., after a massive earthquake hit the area, February 9, 1971. (Photo by AP Photo) 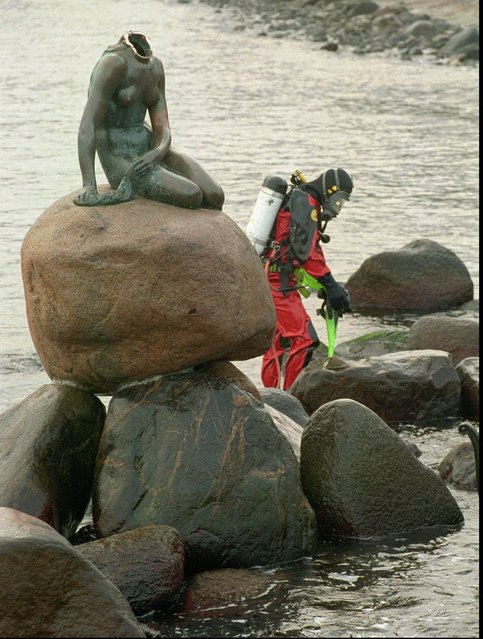 A diver prepares to search for the missing head of The Little Mermaid in Copenhagen's harbour Tuesday, January 6, 1998. Copenhagen's number one tourist attraction was decapitated during the night by unknown offenders. (Photo by Mogens Flindt/AP Photo) 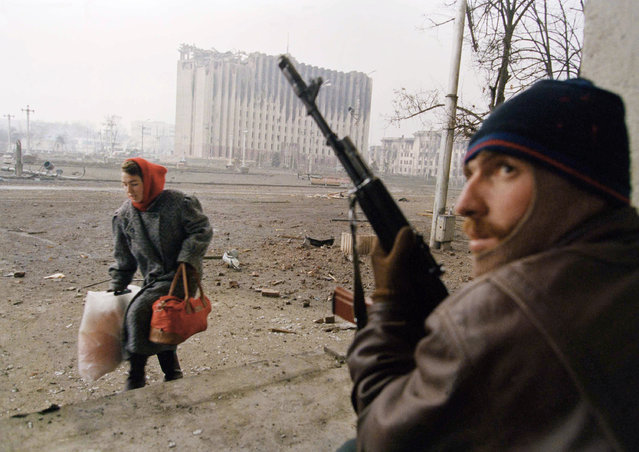 A Chechen fighter opposite the presidential palace, in background, keeps an eye out for snipers as a refugee makes her way across the main square out of harm's way on Tuesday, January 10, 1995 in Grozny. A ceasefire called by the Russian government for the next-48-hours quickly collapsed Tuesday as heavy shelling and small-arms fire again filled the Chechen capital. (Photo by David Brauchli/AP Photo) 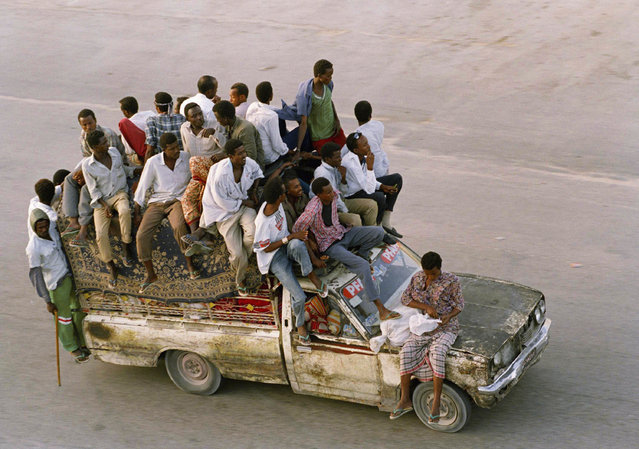 A decrepit taxi sags under the weight of far too many passengers in Mogadishu, January 19, 1993. The price of a ride inside the taxi through the devastated capital of Somalia is twenty U.S. cents and half that for a ride on the roof of the taxi, or hanging off the back. (Photo by Greg Marinovich/AP Photo) 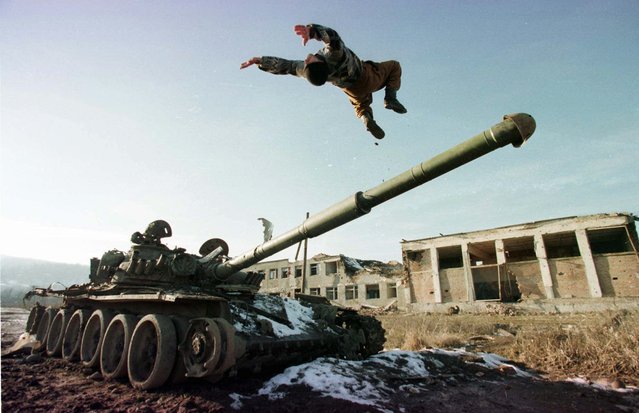 A Chechen soldier does a back flip off a Russian tank gun in the Chechen village of Bamut Friday, January 24, 1997. Elections are planned in Chechnya on Monday and the separatist leaders are campaigning to make Chechnya fully independent of Russia. (Photo by Sergei Karpukhin/AP Photo) 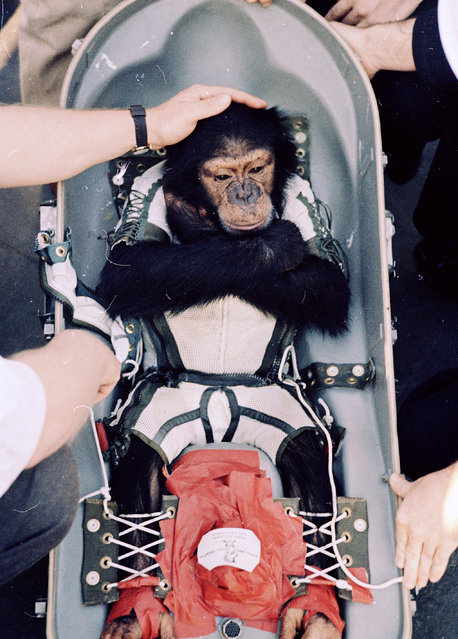 In this January 31, 1961 file photo, Ham, the first higher primate launched into outer space, is comforted by an unidentified man on the deck of a rescue ship after the splashdown in the Atlantic Ocean. Chimpanzees should hardly ever be used for medical research, a prestigious scientific group told the government Thursday – advice that means days in the laboratory may be numbered for humans' closest relatives. The Institute of Medicine stopped short of recommending the outright ban that animal rights activists had pushed. Instead, it urged strict limits that would make invasive experiments with chimps essentially a last resort, saying today's more advanced research tools mean the primates' use only rarely will be necessary enough to outweigh the moral costs. (Photo by AP Photo) 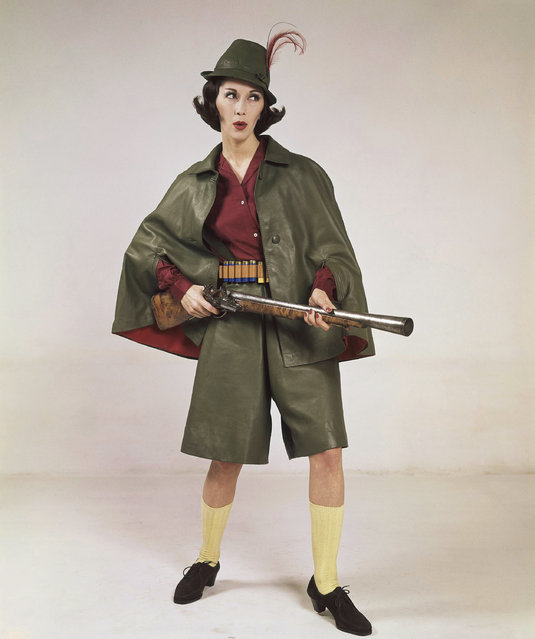 A hunting outfit, consisting of a cape and pant-gown of green glossy leather, with a hat of the same material and a red feather tassel, and worn with a blouse of red silk, the same color as the lining of the cape. It is a creation by the Roland's fashion house of Rome, presented, January 9, 1962. (Photo by Mario Torrisi/AP Photo) 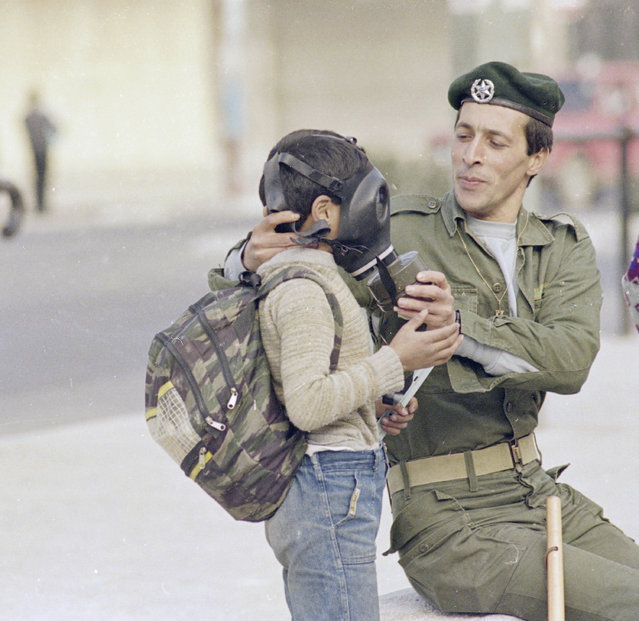 An Arab boy on the way home from school and who previously suffered the effects of teargas gets an assist from an Israeli border policeman in trying on a gas mask, January 11, 1988. (Photo by Max Nash/AP Photo)
Edit Del
01 Mar 2018 00:05:00, post received 0 comments
Publication archive:
←   →
Popular tags:
All tags
Last searches: