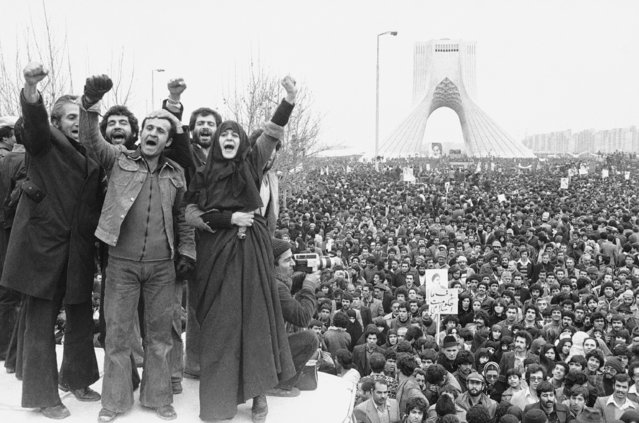 In this January 19, 1979 file photo, more than a million supporters of an Islamic Republic assembled around the Shayad monument, in Tehran, Iran. Wednesday, Jan. 16, 2019 marks the 40th anniversary of the shah abandoning his Peacock Throne and leaving his nation for the last time in his life, setting the stage for the country's 1979 Islamic Revolution only a month later. (Photo by Aristotle Saris/AP Photo) 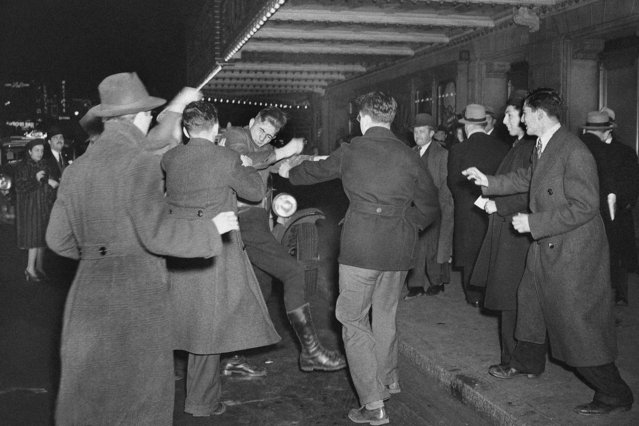 This February 20, 1939 file photo shows a crowd of demonstrators outside New York's Madison Square Garden as they seize a uniformed member of the German American Bund who had emerged from a Bund rally and attempted to enter a taxi. he pro-Hitler rally that took place 80 years ago this week at New York’s Madison Square Garden is the subject of a short documentary that’s up for an Oscar this Sunday, Feb. 24, 2019. The film directed by Marshall Curry is called a “A Night at the Garden”. (Photo by AP Photo/File) 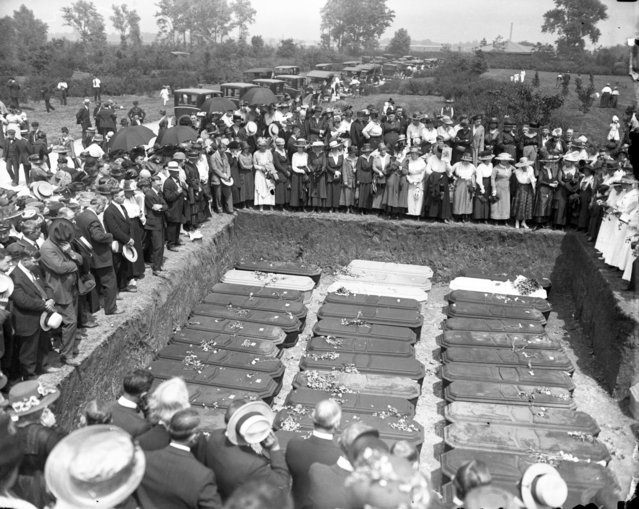 In this June 1918 photo, many of the deceased who were killed in the Hagenbeck-Wallace circus train wreck near Hammond, Ind. are buried at Showman's Rest in Woodlawn Cemetery in Forest Park, Ill. The Hagenbeck-Wallace circus had just finished two shows in Michigan City, Ind., and was heading to Hammond when an empty train barreled into the circus train on June 22, 1918. (Photo by Chicago Tribune via AP Photo) 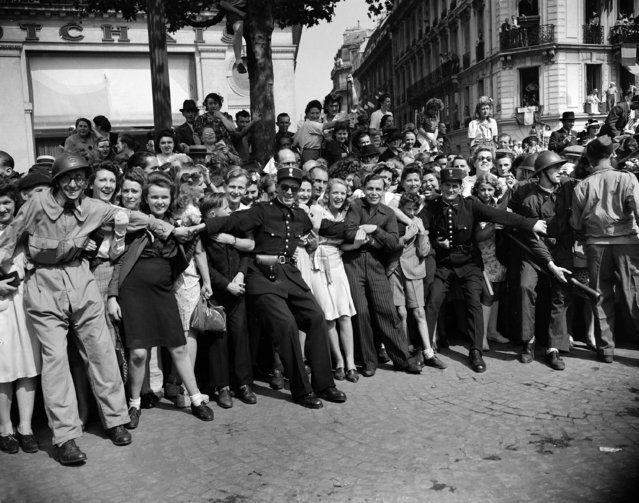 In this August 26, 1944 file photo, gendarmes and F.F.I. hold back crowds of people as they throng the streets to see General Charles De Gaulle in Paris. The fighting for the liberation of Paris took place from August 19 to August 25, 1944. (Photo by Laurence Harris/AP Photo/File) 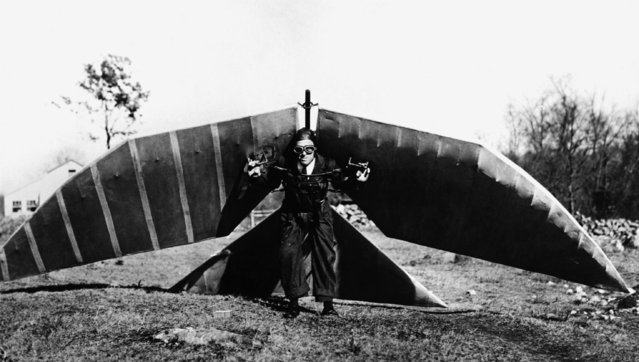 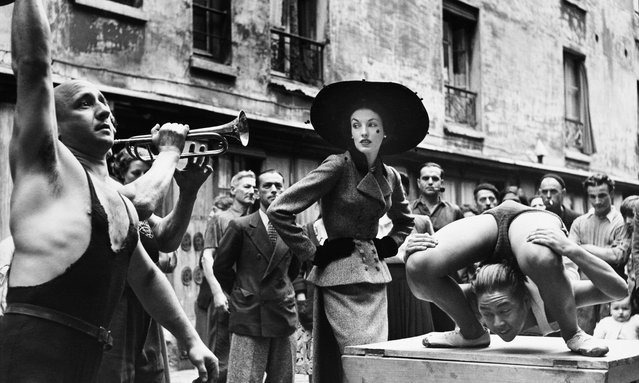 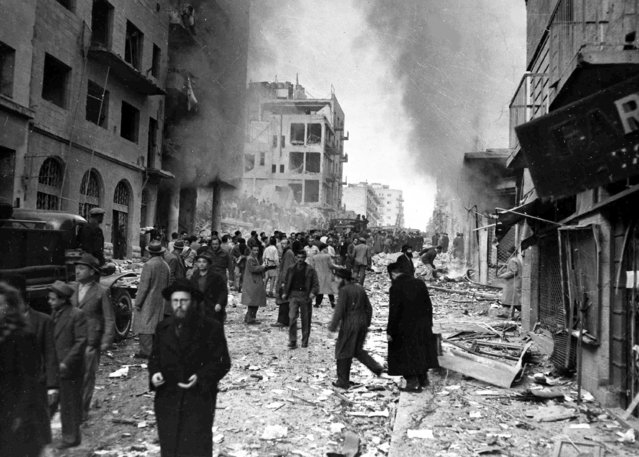 Two trucks exploded on Ben Yehuda Street, in the heart of the Jewish business district of Jerusalem, February 2, 1948, killing 27 people and injuring more than 100 others. (Photo by AP Photo/Pringle) 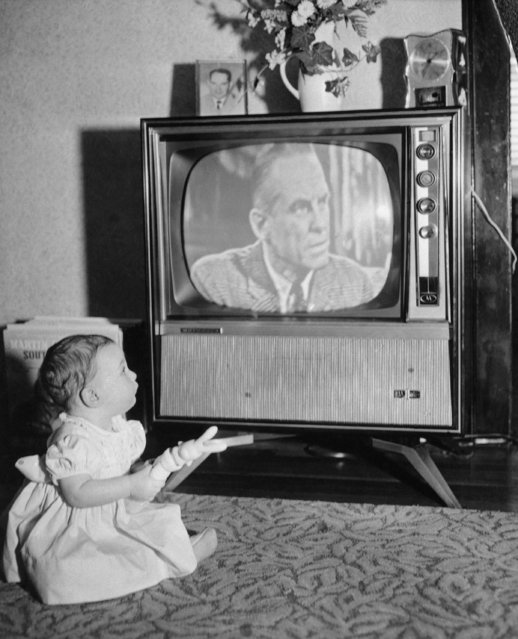 Eight month old Andrea Whalen holds trick rabbit that causes the television set to change channels when bunny is pressed and squeaks on February 6, 1961. Set has a remote control device which is evidently activated by squeak from rabbit. (Photo by AP Photo) 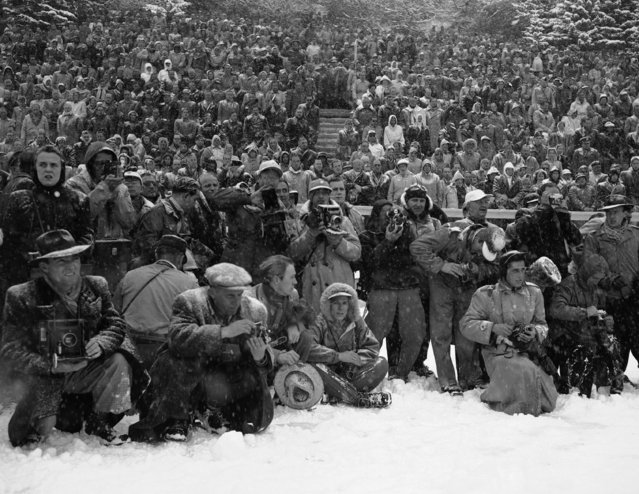 A battalion of photographers wrapped up in diverse costumes during a snowy session of the Winter Olympics on the St. Moritz ice stadium, February 6, 1948, St. Moritz, Switzerland. (Photo by AP Photo/Green) 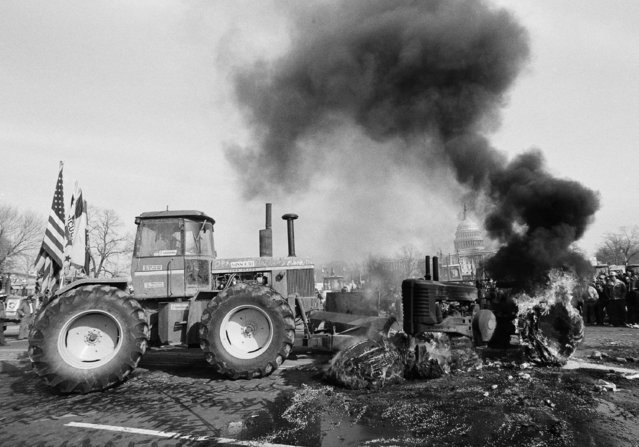 A tractor with front and blade pushes the burning hulk of another tractor out of the Washington on Tuesday, February 6, 1979 in to clear the way for a tractorcade from the Mall area to the White House. The farmers set fire to the tractor earlier in the day when they were prevented from leaving the Mall area. (Photo by AP Photo) 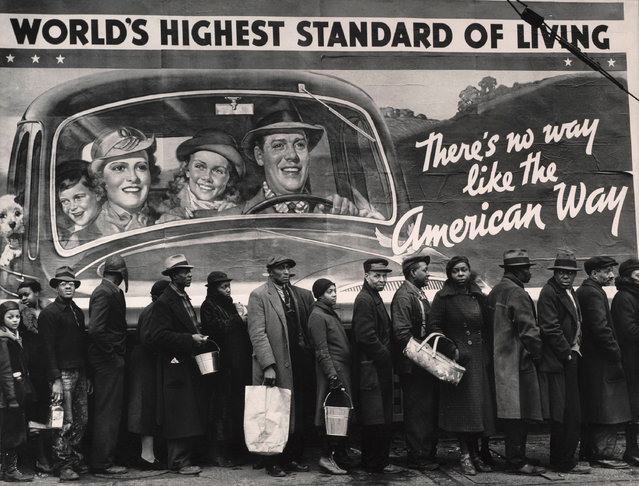 In 1937, Margaret Bourke-White photographed an advertisement that read: “World’s highest standard of living: There’s no way like the American way”. It was seen in Louisville, shortly after a flooding in Ohio River valley. A group of African Americans lined up outside, waiting for emergency relief from a government station. Bourke-White, who showed how strenuous the depression was in the 1930s, is featured in a new group exhibit that details how America coped in dire political and economic times. (Photo by Margaret Bourke-White/The Guardian) 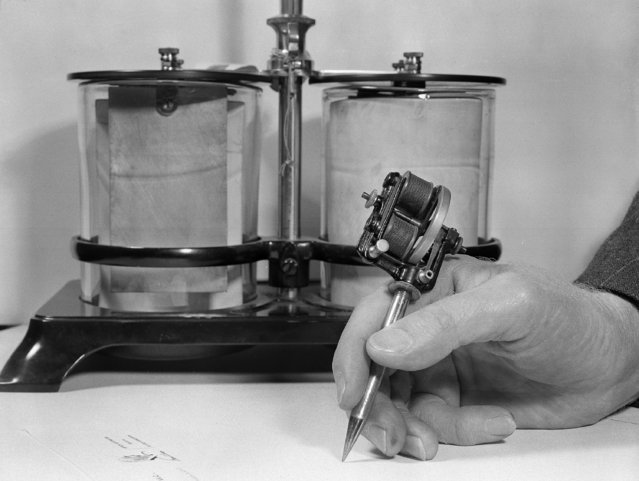 This is said to be the first commercially produced electric motor, says Ward Harris, San Francisco businessman who has a collection of Thomas Edison's inventions, February 7, 1949. Photo shows the Edison electric pen, a stencil needle powered by the batteries in the background. As the user writes in the usual manner, the needle jabbed holes in the paper which was used as a stencil by applying ink with a hand roller. (Photo by Ernest K. Bennett/AP Photo) 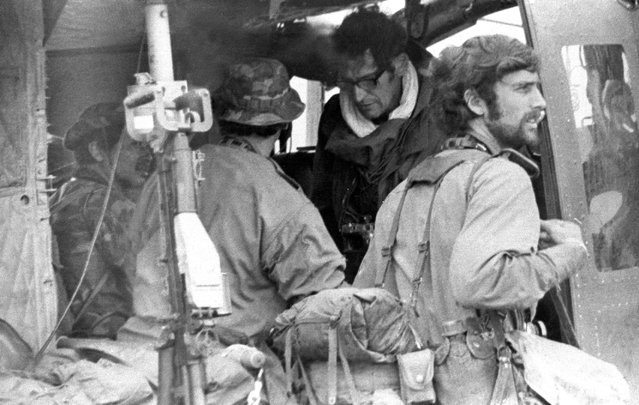 Four Vietnam War photojournalists are seen waiting for a helicopter flight into Laos to cover South Vietnamese forces attacking the Ho Chi Minh Trail on February 10, 1971. From left (inside helicopter): Keisaburo Shimamoto, Newsweek; Henri Huet, AP (back to camera); Larry Burrows, Life magazine; and Kent Potter, United Press International (standing at right). All four were killed in 1971 when the helicopter they were flying in was shot down. (Photo by Sergio Ortiz/AP Photo) 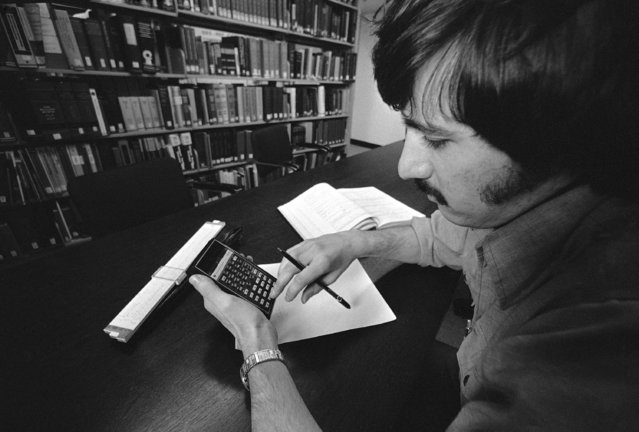 Steven F. Manzi of Cranston, R.T., a graduate student at the Massachusetts Institute of Technology, uses a calculator in his studies as an engineer at MIT in Cambridge, Massachusetts, February 10, 1976. The old slide rule formerly used in his work is at lower left of the photo. (Photo by AP Photo) 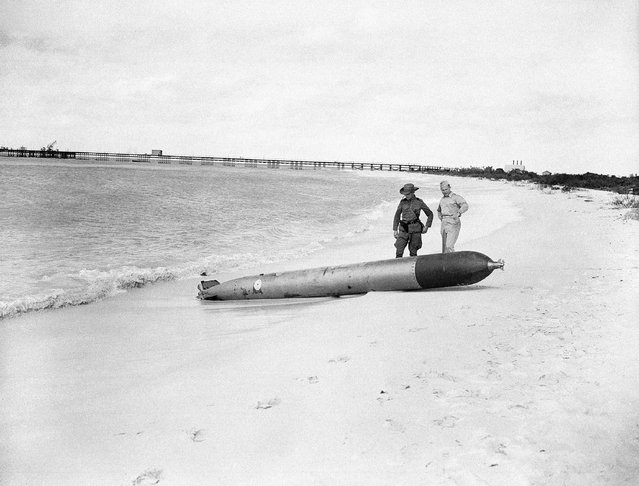 A torpedo fired by an Axis submarine in its attack on tankers off Aruba Dutch West Indies, is inspected by Dutch, left, and U.S. Army officers after it washed up on the beach unexploded, February 16, 1942. The 18-F missile went off, killing four Dutchmen who were trying to take it apart. The Americans is officer, Capt. Robert Bruskin, former Washington and Baltimore newspaperman. (Photo by AP Photo) 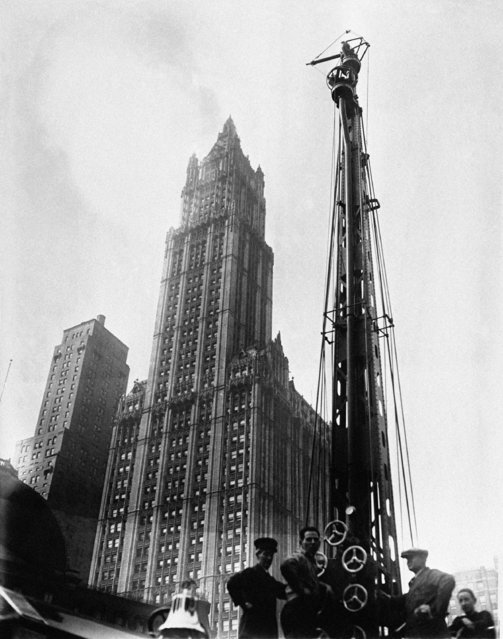 More and higher skyscrapers have made it necessary for the New York Fire Department to construct new fire towers to extinguish blazes originating many stories in the air. The new fire tower tested in City Hall Square, New York City on February 21, 1930 as it looks from an angle beside the Woolworth Building. (Photo by AP Photo) 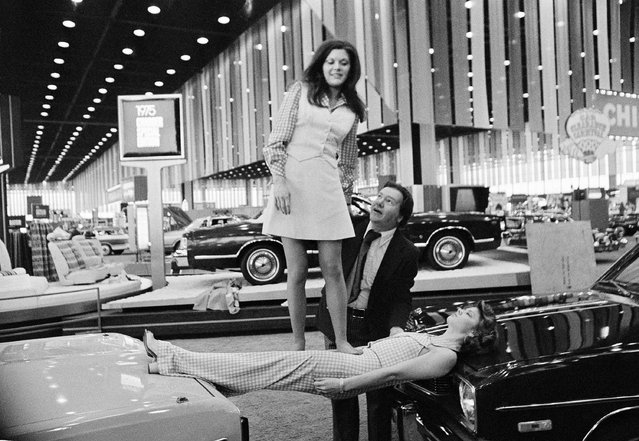 Carol Richardson, 21, of Southgate, who has been hypnotized, supports Cheri Trudell, 19, of Rochester, as she lies with her head and feet resting on hoods of two Dodge autos at Chicago's McCormick Place, February 21, 1975 on the eve of the opening of the annual automobile show. Hypnotist Karrell Fox of Farmington helps Cheri keep her balance. All are from Michigan. (Photo by Larry Stoddard/AP Photo) 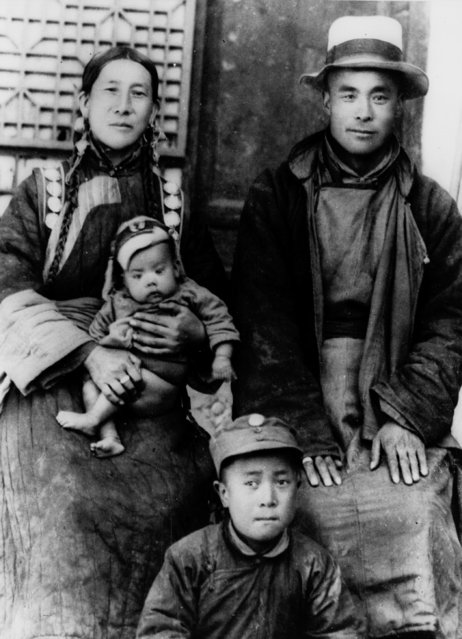 Proud parents of the 14th Dalai Lama pose in Tibet on February 21, 1940 with two other sons. The infant peasant boy will be installed spiritual and temporal leader of Tibet on Feb. 22. (Photo by AP Photo) 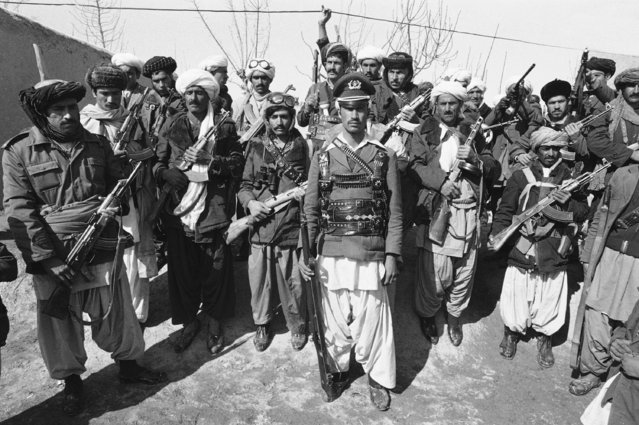 A mujahedeen, a captain in the Afghan army before deserting, poses with a group of rebels near Herat, Afghanistan, February 28, 1980. It was reported that the Afghan capital of Kabul returned to normal for the first time since bloody anti-Soviet rioting erupted there last week, killing more than 300 civilians and an unknown number of Soviet and Afghan soldiers. (Photo by Jacques Langevin/AP Photo) 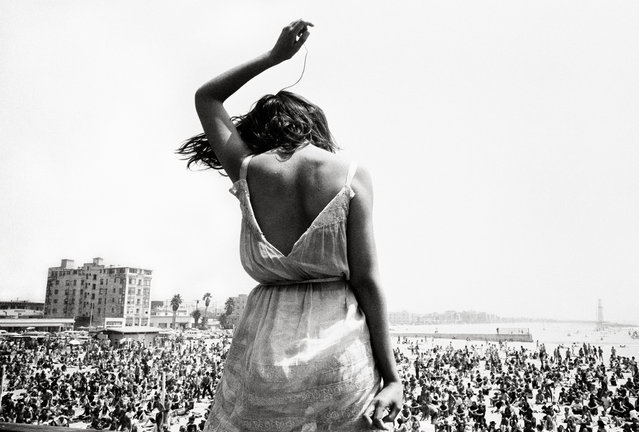