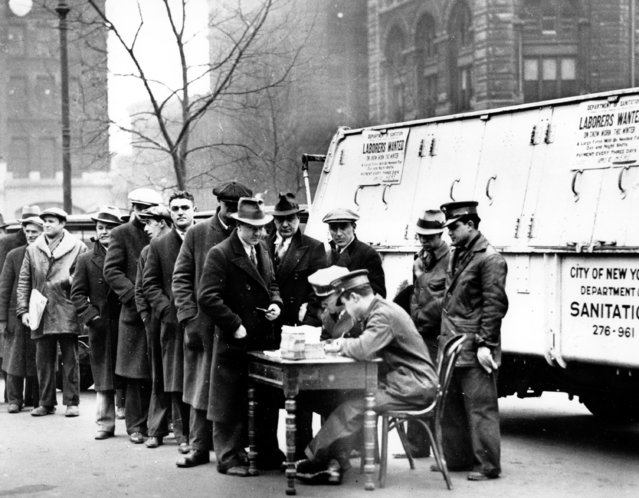 Men line up in front of City Hall to apply for jobs cleaning away snow in New York City on January 3, 1934 during the Great Depression. A sign attached to the parked snow-removal truck reads, “Laborers Wanted”. (Photo by AP Photo) 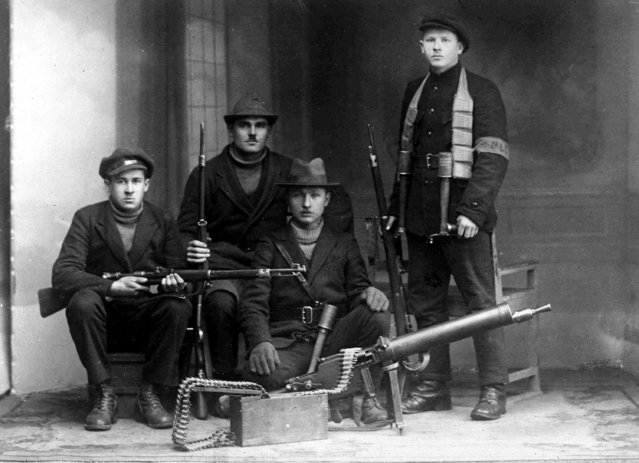 Some of the Lithuanian irregulars who have forced the French garrison to withdraw from Memel and the surrounding district, January 12, 1923. (Photo by AP Photo) 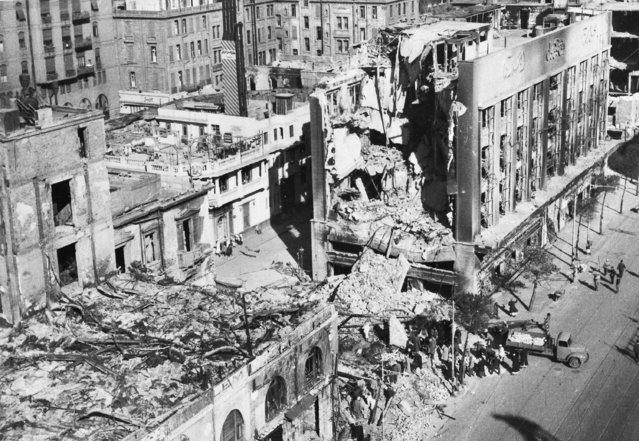 Aerial view of the remains of the burnt out “Cicurel”, Cairo's biggest department store, in Cairo, Egypt, January 26, 1952, after it was burnt out the previous day by rioters. The building is on Cairo's Fouad First Avenue. (Photo by AP Photo) 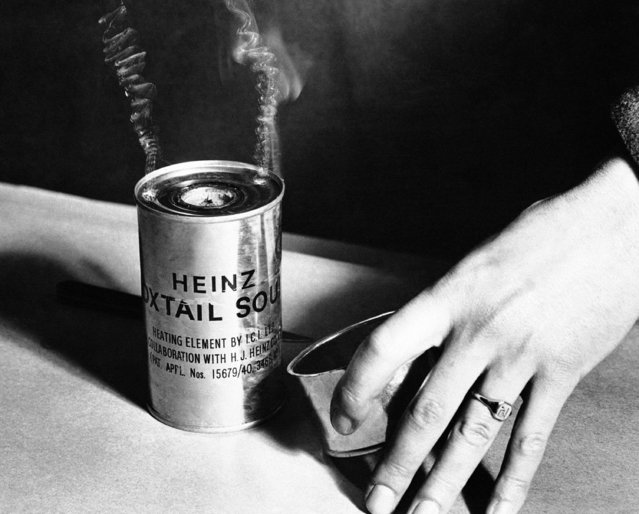 Steam rising through the pierced lid of the self heating can signals that the soup is ready, in London, England on March 23, 1944. It heats in about four minutes. (Photo by AP Photo) 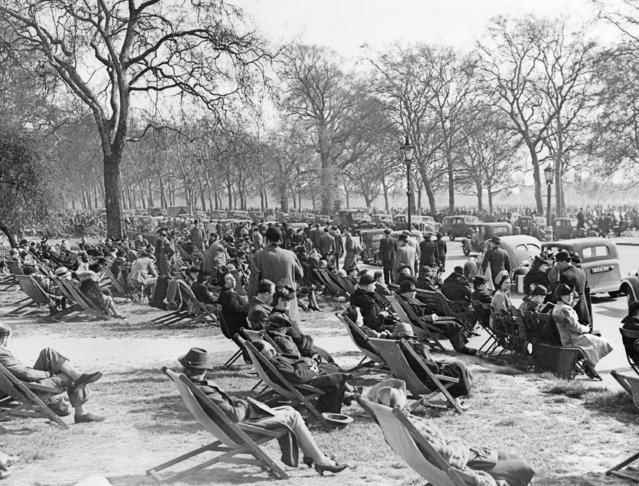 Automobiles line a roadside through Hyde Park, London, on May 4, 1941, the sunshine attracting crowds despite the threat of air raids. This is part of the crowd that caused seat ticket-sellers to report “capacity business”. (Photo by AP Photo) 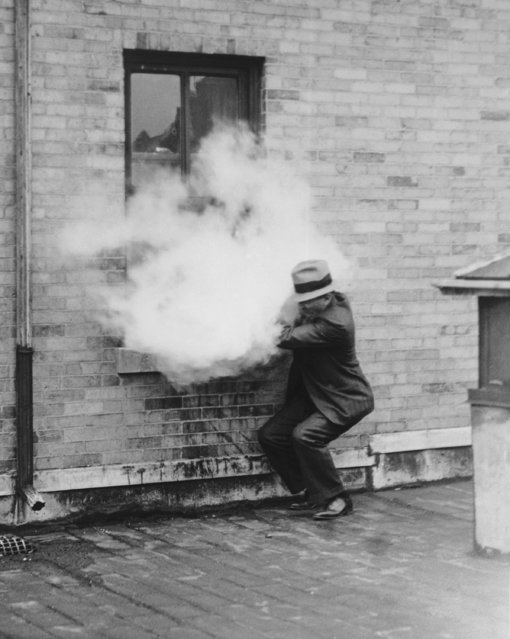 An experimental “mechanical guard” to protect children and adults within a home, shoots out a burst of tear gas to repel would-be criminals. The device is demonstrated by Lloyd Curtiss, engineer of federal laboratories, Pittsburgh, Pa., May 17, 1932. (Photo by AP Photo) 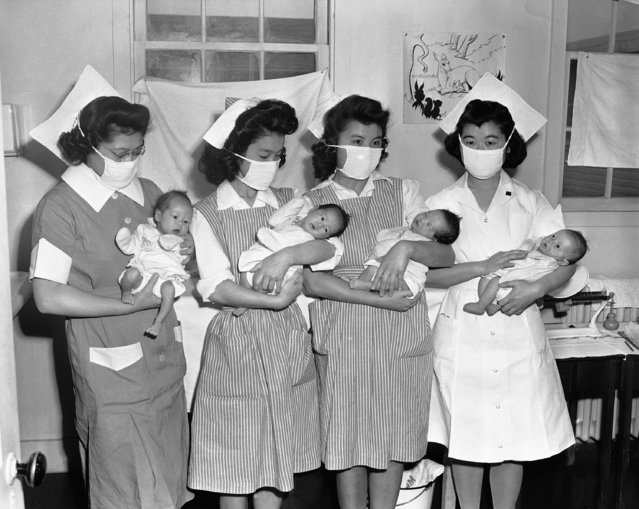 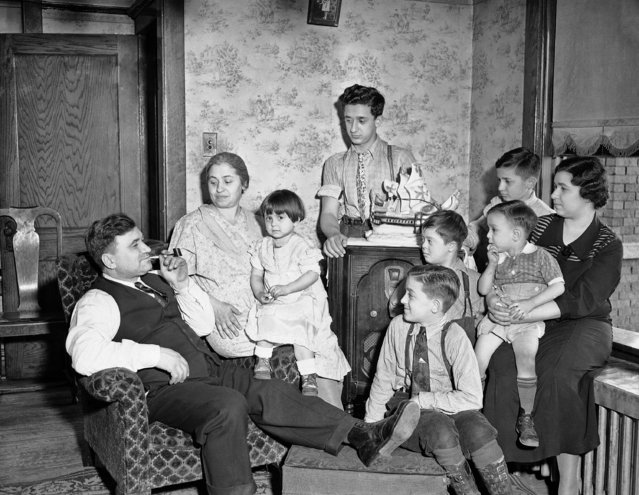 Frank Esposito finds comfort and happiness surrounded by his family after his duties as a worker in Illinois steel company's plant are completed for the day in south Chicago, March 3, 1937. Left to right: Esposito, his wife, Theresa holding Jean, 3; Jerry 15; John 12; Tom 10; Joe 7, and Della Fionda, his daughter, holding Joe, 2. (Photo by AP Photo) 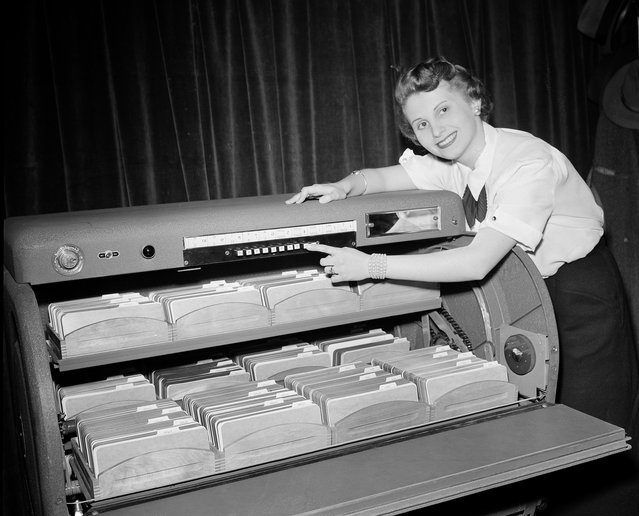 Barbara Johnson of Chicago pushes one of ten buttons that puts one of the card cradles in place in one of the new motorized card-finding systems shown during the 13th Annual Chicago Business Show, March 3, 1952. The unit contains about 82,000 tabulation cards. Called “Simplafind”, it is a product of the Simpla Research and Manufacturing Co., Inc., of New York. The company was one of 77 manufacturers of business machine equipment to display their products at the Conrad Hilton Hotel in Chicago. (Photo by Edward Kitch/AP Photo) 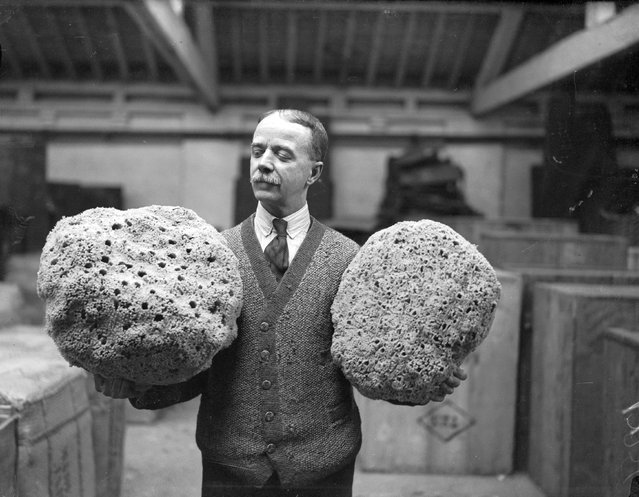 Large honeycombe sponges from the eastern Mediterranean which are going to be on display at a PLA (Port of London Authority) warehouse, 9th March 1933. (Photo by Harry Todd/Fox Photos/Getty Images) 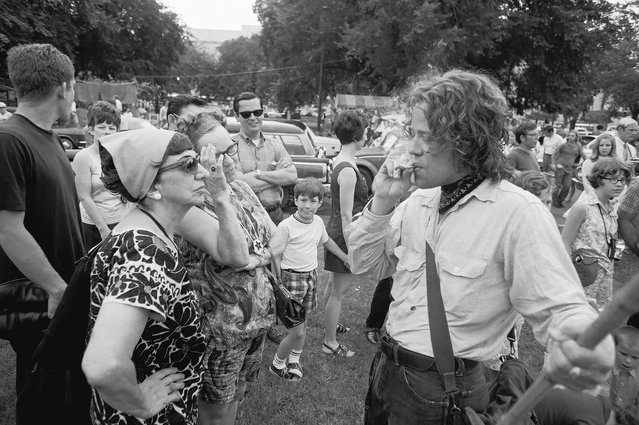 An unidentified young man smokes what appears to be a marijuana cigarette for the benefit of a pair of middle-aged women, along with several other onlookers, during the “Honor America Day Smoke-In” thrown by marijuana activists to protest the official “Honor America Day” ceremonies being held at the Lincoln Memorial, Washington, DC, July 4, 1970. The Vietnam war sharply divided America in 1970, and supporters of Richard Nixon sought to counter the growing opposition by organizing a Fourth of July Honor America Day in Washington DC. The celebration was quickly crashed by thousands of its critics, with marijuana activists staging a “smoke-in” to protest(Photo by David Fenton/Getty Images) 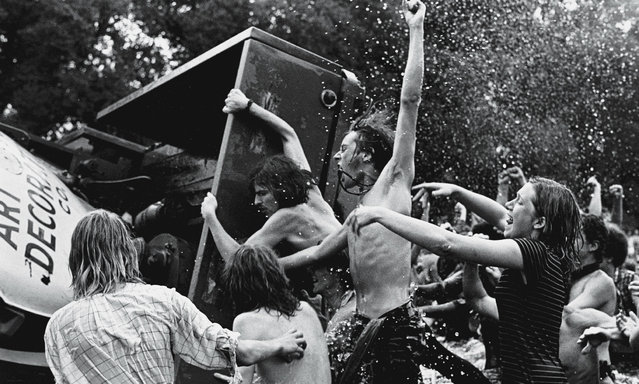 Young demonstrators (many shirtless) shout and cheer as they overturn a truck trailer in the Reflecting Pool on the Mall facing the Washington Monument during the “Honor America Day Smoke-In” thrown by marijuana activists to protest the official “Honor America Day” ceremonies being held at the Lincoln Memorial, Washington, DC, July 4, 1970. (Photo by David Fenton/Getty Images) 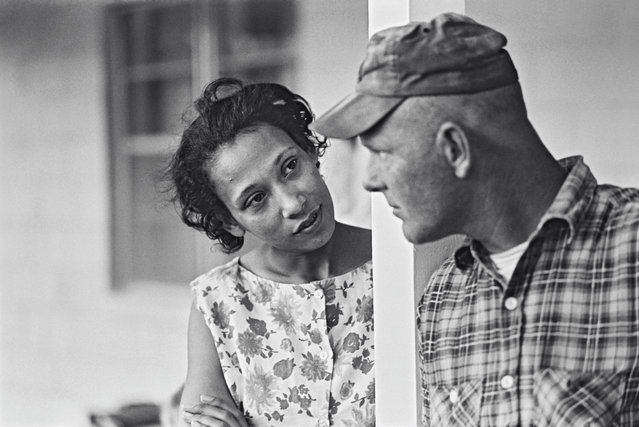 Mildred and Richard Loving, pictured on their front porch in King and Queen County, Virginia, in 1965. In June 1958, the couple went to Washington DC to marry, to work around Virginia’s Racial Integrity Act of 1924, which made marriage between whites and non-whites a crime. After an anonymous tip, police officers raided their home a month later, telling the Lovings their marriage certificate was invalid. In 1959, the Lovings pled guilty to “cohabiting as man and wife, against the peace and dignity of the Commonwealth”. (Photo by Grey Villet/The Guardian) 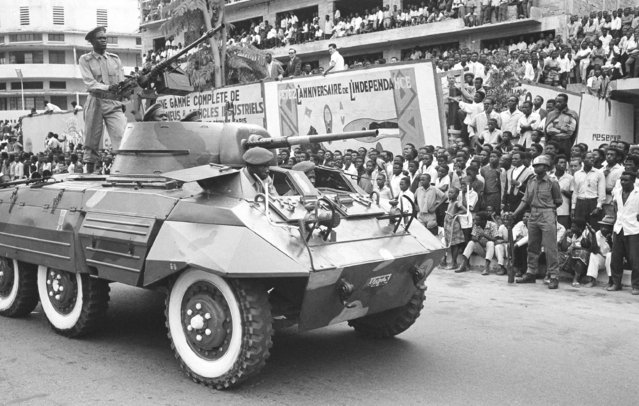 In this June 30, 1961 file photo, Congo celebrates the first anniversary of independence from Belgium with a large military parade in Leopoldville, the capital before it was later renamed in 1966 to Kinshasa, in Congo. On Tuesday, June 30, 2020 Congo is marking the 60th anniversary of achieving independence from the colonial rule of Belgium. (Photo by Horst Faas/AP Photo/File) 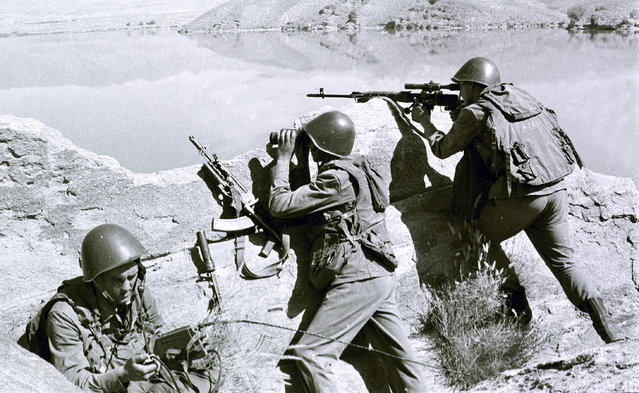 In this late April 1988, file photo, Soviet soldiers observe the highlands, while fighting Islamic guerrillas at an undisclosed location in Afghanistan. Moscow and Washington are intertwined in a complex and bloody history in Afghanistan, with both suffering thousands of dead and wounded in conflicts lasting for years. Now both superpowers are linked again over Afghanistan, with intelligence reports indicating Russia secretly offered bounties to the Taliban to kill American troops there. But analysts suggest that the two adversaries actually have more in common, especially when it comes to what they want to see in a postwar Afghanistan: a stable country that does not serve as a base for extremists to export terrorism. Both countries also are aligned in their opposition to militants from the Islamic State group. (Photo by Alexander Sekretarev/AP Photo/File) 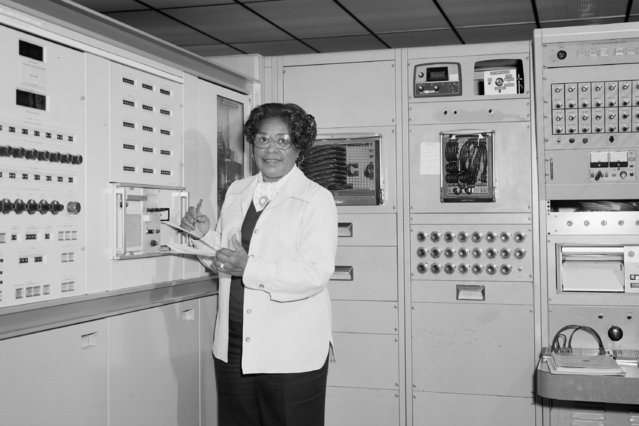 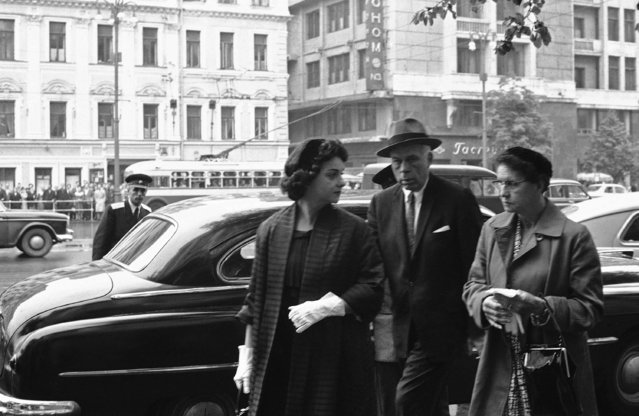 Mrs. Barbara Powers, left, wife of U-2 pilot Francis Gary Powers, is accompanied by her lawyer, Alexander Parker, and her mother, Mrs. Monteen Brown, as she arrives on August 19, 1960 at the hall of Columns in Moscow, for the third and last day of her husband?s trial for espionage. Powers was sentenced to ten years detention. (Photo by AP Photo)
Edit Del
05 Jul 2020 00:03:00, post received 0 comments
Publication archive:
←   →
Popular tags:
All tags
Last searches: