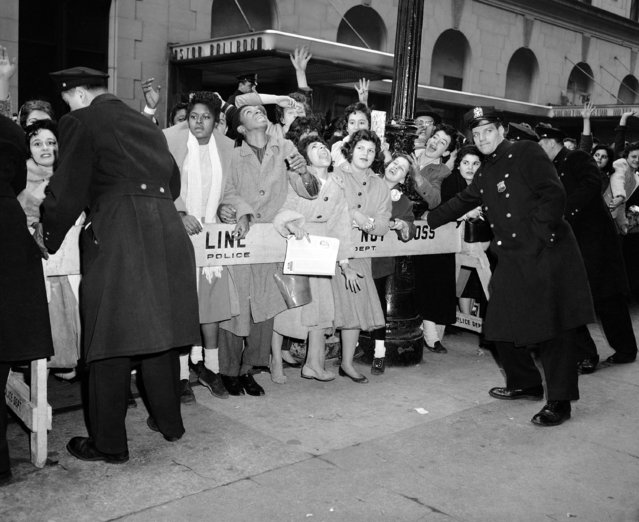 New York City police attempt to restrain part of a group of thousands of “Rock N' Roll” enthusiasts as they wait on west 44th street in New York on February 21, 1957, for entrance to the Paramount Theater to see a movie and stage show. A glass panel was broken in an adjacent store and two girls sustained leg injuries. Some 50 policemen were called to the area and west 45th between Broadway and Eighth Avenue was closed to traffic. (Photo by AP Photo) 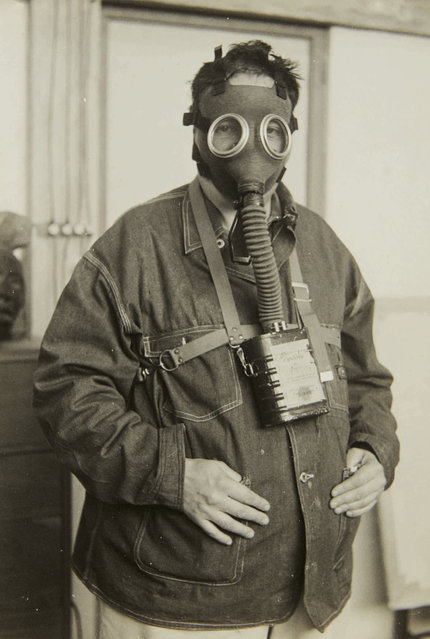 In this 1938 photo provided by Sotheby's, painter Diego Rivera poses with a gas mask in Casa Azul, Mexico. The image is part of a collection of photographs by Nicholas Muray up for auction on Friday, April 5, 2019. (Photo by Nickolas Muray via Sothebys via AP Photo) 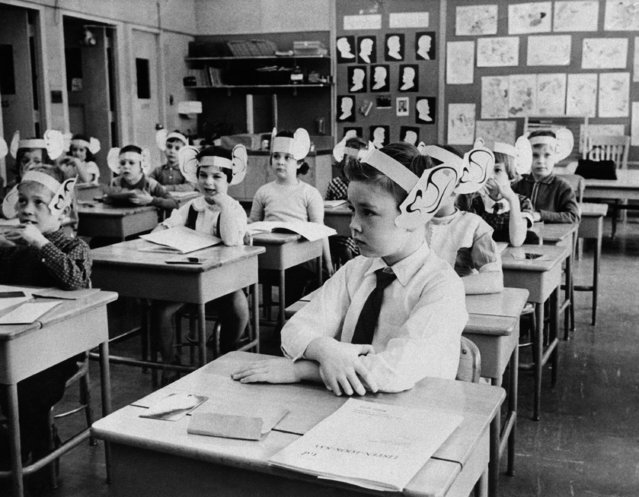 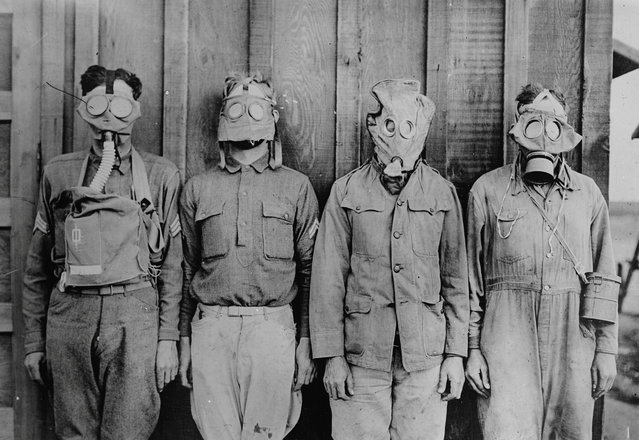 American, British, French, and German gas masks are seen in an undated photo taken during the First World War. (Photo by Library of Congress via Reuters) 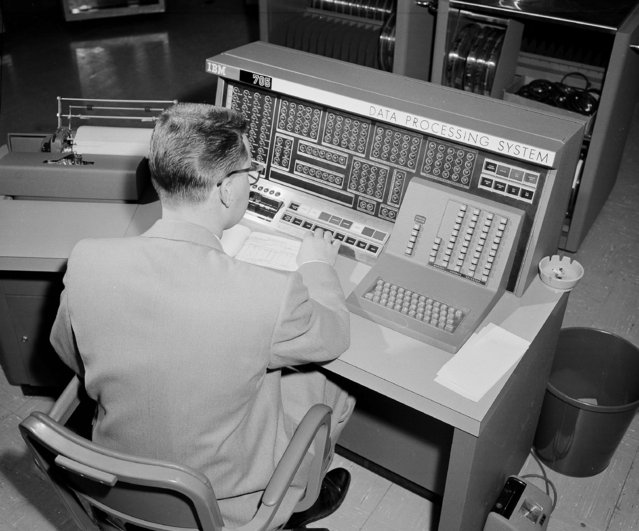 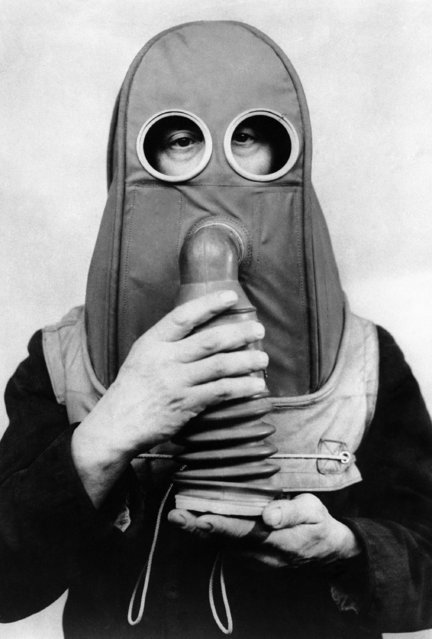 This is the newest anti-gas helmet, designed for persons who cannot wear any ordinary type gas mask shown in England, February 16, 1941. (Photo by AP Photo) 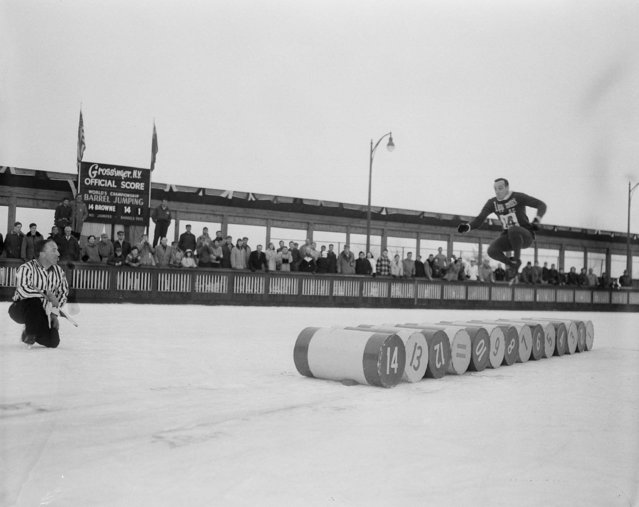 Terry Browne, 33-year-old Detroit, Mich., fireman, is at the halfway mark as he sails over 14 barrels, a distance of 27 feet, nine inches, to win the World Barrel Jumping Championship at Grossinger, N.Y., January 11, 1953. (Photo by AP Photo) 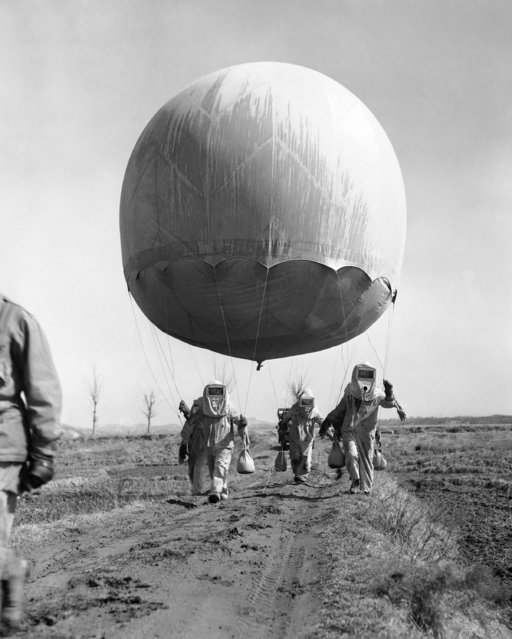 These GIs in white asbestos suits walk along a road between rice paddies at Panmunjom on March 21, 1952 as they shift a helium-filled balloon marker at the peace talk site. This round, orange-colored balloon is being replaced by a balloon of sausage-shape, which is 18 feet long. (Photo by George Sweers/AP Photo) 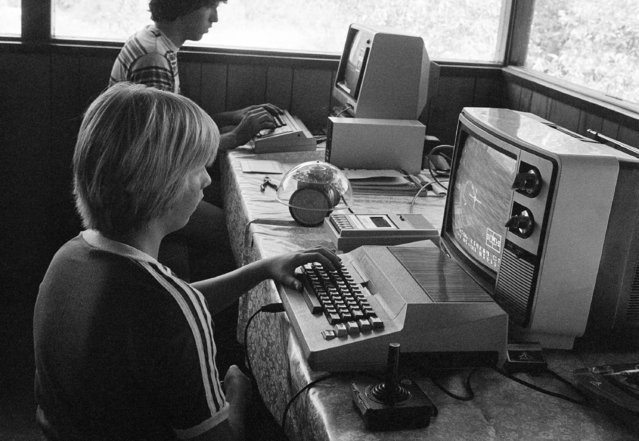 Greg Berman, 12, of Santa Barbara, Calif. sits at computer console at California Computer Camp near Santa Barbara on July 29, 1980. The camp is a place where, its founder and President Denison Bollay says children are prepared for “what it's going be like a decade from now” in a world increasingly reliant upon computers. (Photo by AP Photo/Hyman) 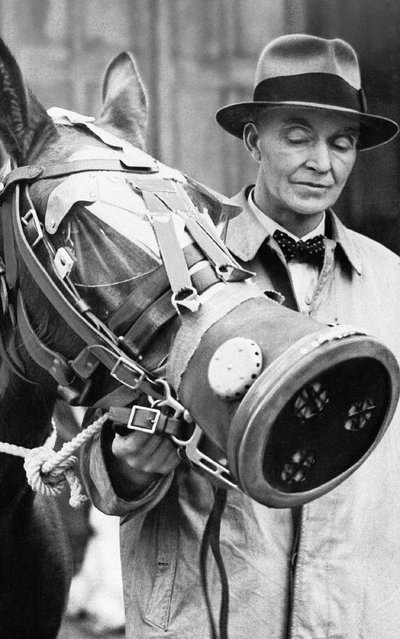 A specially designed gas mask for horses is being tested by this horse. The test took place in London, March 22, 1941, at a demonstration arranged by the National Air Raid Precautions Animals Committee. (Photo by AP Photo) 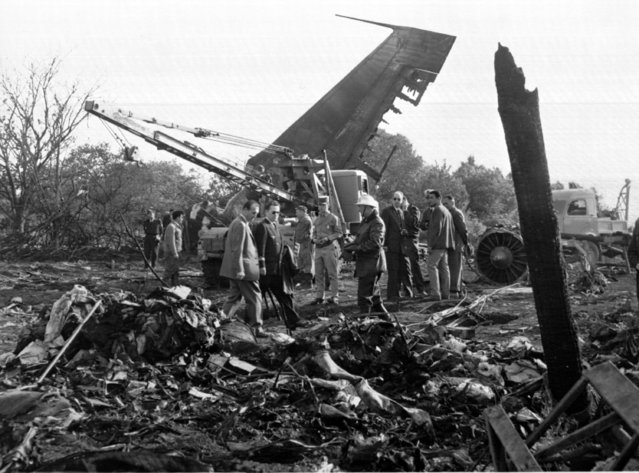 Firemen and civilians survey the scene of devastation around the wreckage of a chartered Air France aeroplane which crashed whilst taking off from Orly Airport, June 3, 1962. (Photo by AP Photo) 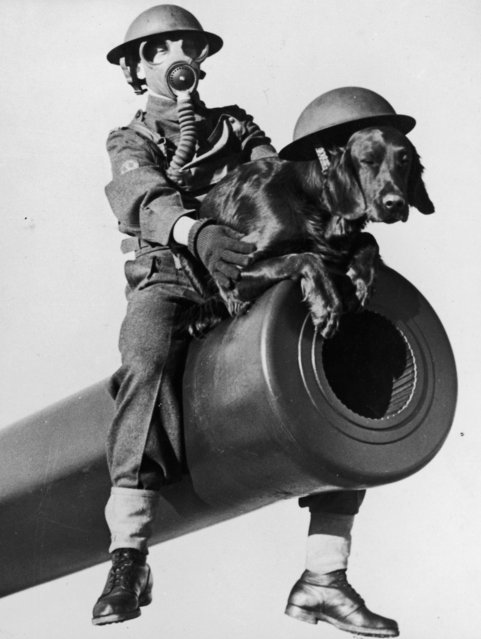 A soldier holds the canine mascot steady as they pose on the muzzle of one of Canada's powerful East Coast defense guns, March 22, 1941. (Photo by Fox Photos/Getty Images) 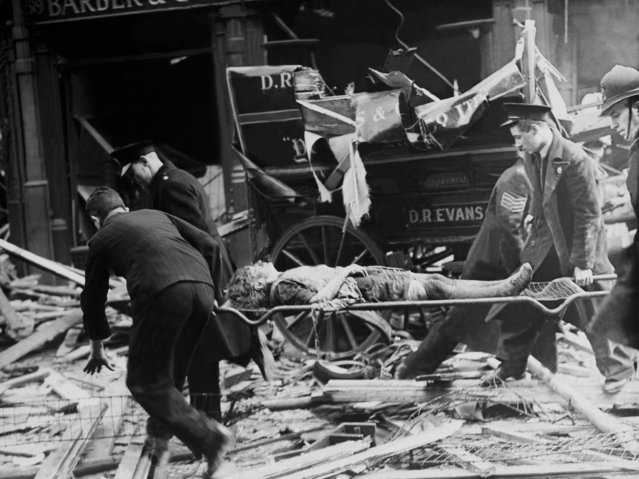 Soldiers carrying an injured civilian on a stretcher during air raid during World War II, 1940 (Photo by Keystone-France/Gamma-Keystone via Getty Images) 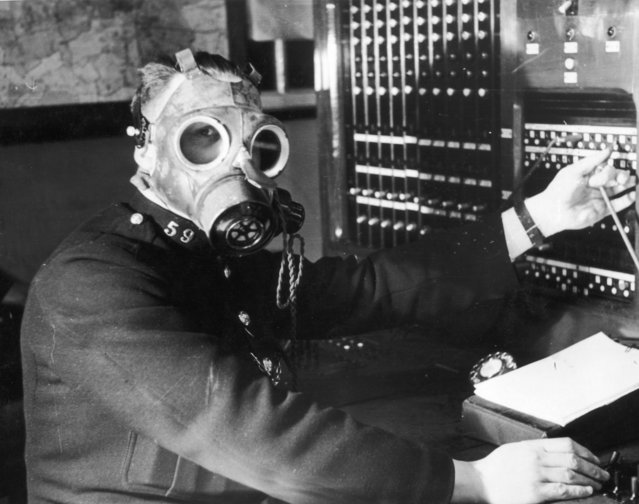 A Chesterfield Borough Police telephone operator tests a gasmask with built in earpiece and microphone. The telephone service is considered one of the most important links in the coordination of ARP operations and must remain operational during air raids, 12th April 1939. (Photo by Fox Photos/Hulton Archive/Getty Images) 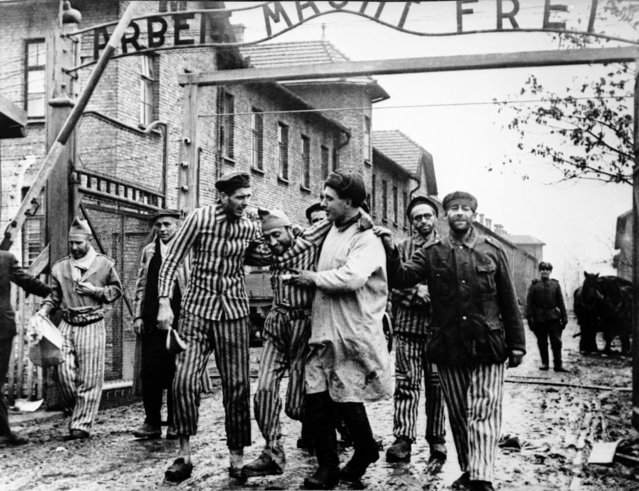 A doctor (centre) of the 322nd Rifle Division of the Red Army, with a group of survivors at the entrance to the newly-liberated Auschwitz I concentration camp, Poland, January 1945. The Red Army liberated the camp on 27th January 1945. Above the gate is the motto “Arbeit macht frei” (“Work brings freedom”). (Photo by Fine Art Images/Heritage Images/Getty Images) 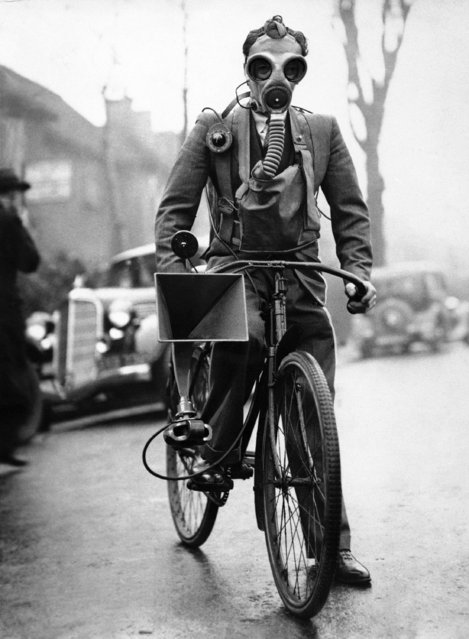 A cyclist complete with respirator, bearing a portable amplifier for warning at Hendon on March 10, 1936. (Photo by AP Photo) 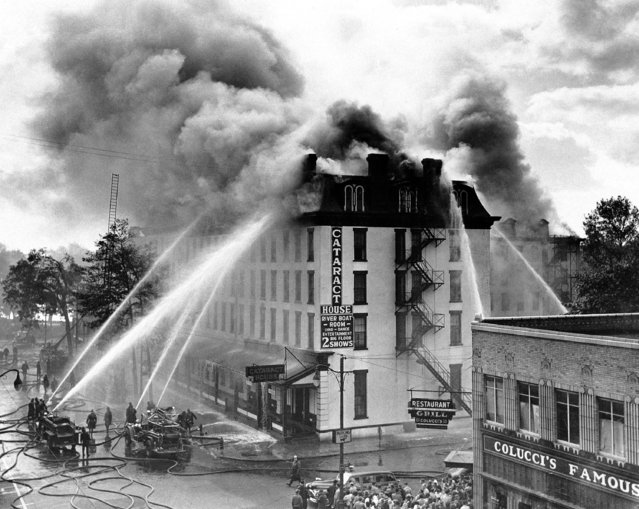 The Cataract House, Niagara Falls, N.Y., hotel that was home to presidents and visiting European royalty during its 120 years of existence, was three-quarters destroyed by a general alarm fire of undetermined origin, October 14, 1945, causing damage estimated at $700,000. (Photo by AP Photo) 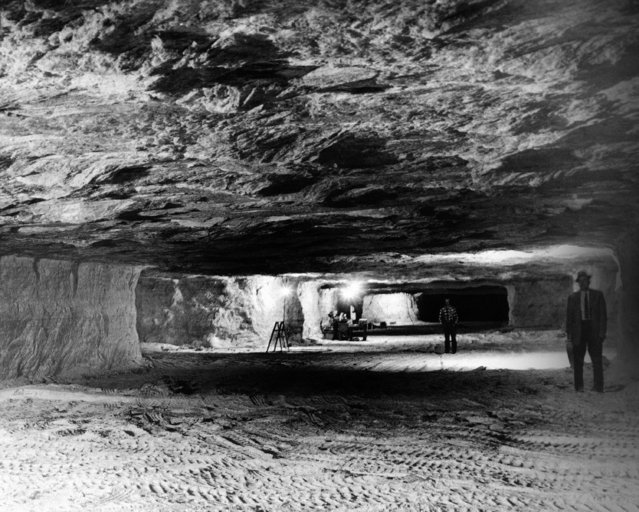 View of a huge cavern carved 650 feet underground near Hutchinson, Kansas, September 19, 1961, by salt mining. The area includes 125 rooms, each 50 by 300 feet, separated by 10-foot walls of solid salt. The area is being leased for record storage and emergency space as a nuclear bomb shelter. (Photo by AP Photo) 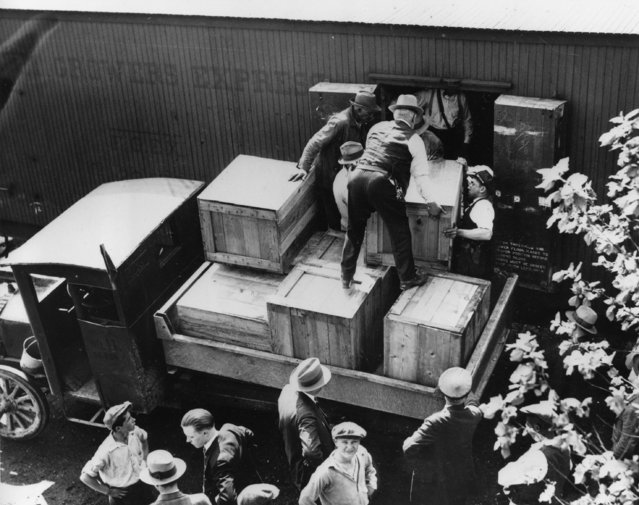 Authorities unload cases of whiskey crates labeled as green tomatoes from a refrigerator car in the Washington yards on May 15, 1929. The grower's express cargo train was en route from Holandale, Fla., to Newark, N.J. (Photo by AP Photo) 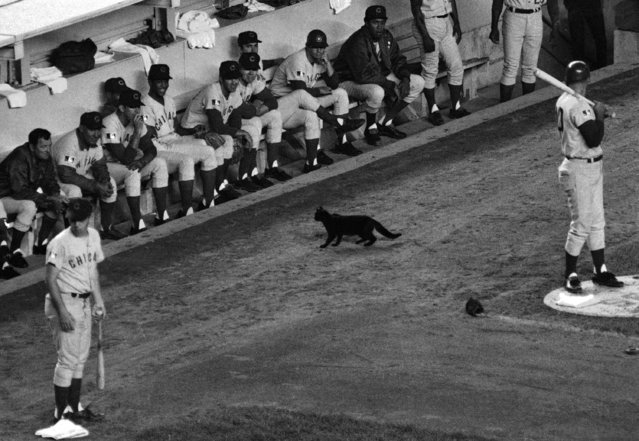 The Chicago Cub's bench chuckled (with the rest of Shea stadium) when that traditional omen of bad luck, a black cat, wandered in front of their dugout during the first inning of game against the New York Mets in New York on September 9, 1969. The more superstitious Cubs were right the Mets won 7-4. (Photo by Dave Pickoff/AP Photo)
Edit Del
17 Mar 2020 00:03:00, post received 0 comments
Publication archive:
←   →
Popular tags:
All tags
Last searches: