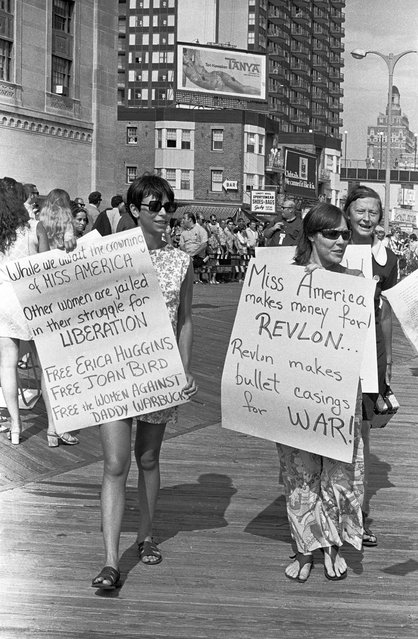 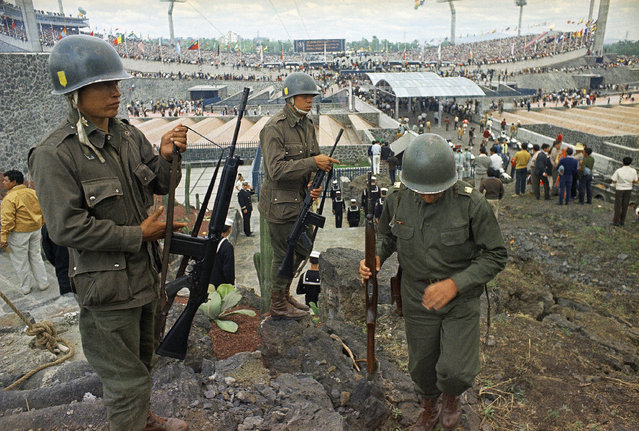 In this October 12, 1968 file photo, soldiers stand guard for the opening ceremony of the Summer Olympics in Mexico City, one week after soldiers opened fire on a peaceful demonstration, which has come to be known as the Tlatelolco massacre. In 1968, students struggled against a monolithic government that presided over a booming economy and was at the height of its power. (Photo by AP Photo) 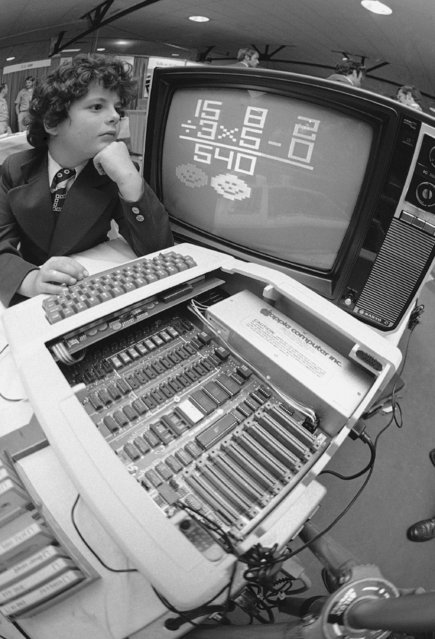 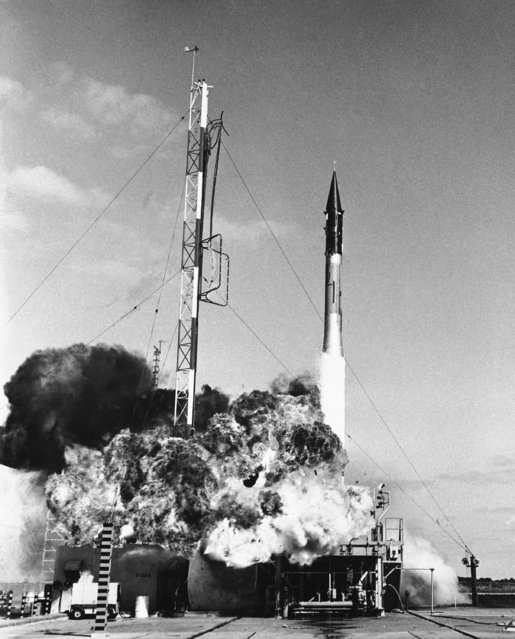 The Vanguard rocket throws out smoke and fire as it explodes at firing at Cape Canaveral, Florida, December 6, 1957. This is the test vehicle which was to have carried America's first earth satellite sphere aloft. (Photo by AP Photo) 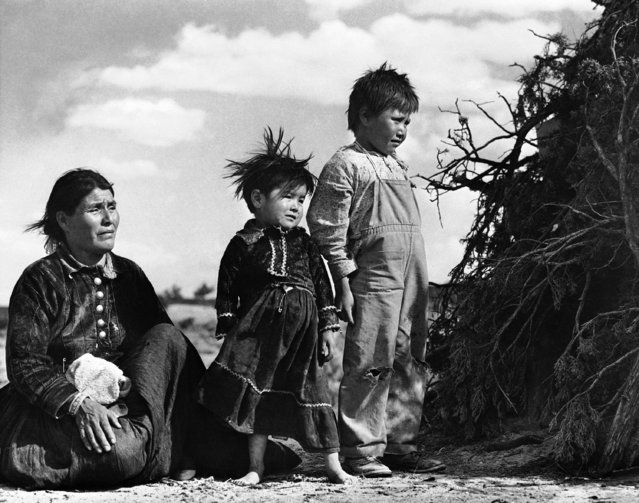 A Navajo mother and her children bask in the sun outside their brush shelter near Torreon, New Mexico, December 29, 1948. The shelters are set up as the Navajos move from place to place with the flocks. Though the Navajos are enjoying greater benefits this winter than they did last year, due to higher prices for their lambs and a good pinon nut crop, their over-all needs are the same as ever – education, hospitalization and adequate relief for the blind, aged and crippled, and economic development. (Photo by AP Photo) 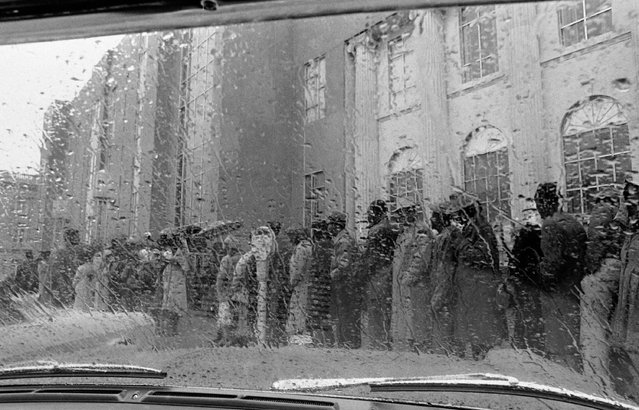 In this February 17, 1965 file photo, African Americans stand in line in the rain to try to register for a voter registration test in Selma, Ala. (Photo by AP Photo) 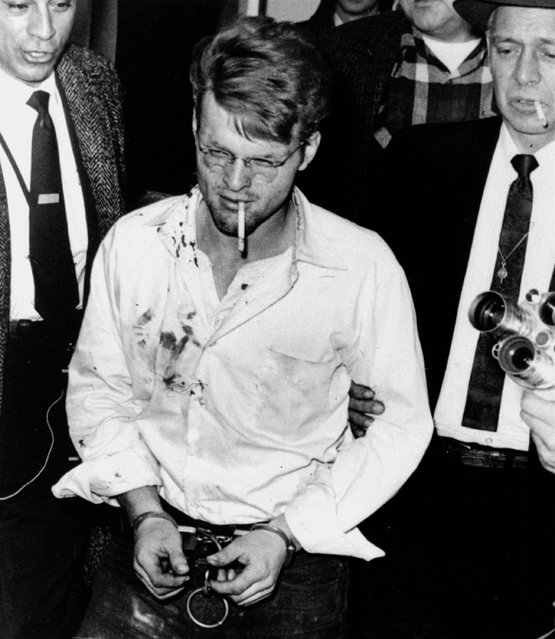 A cigarette dangles from the mouth of handcuffed killer Charles Starkweather as he is led into the Nebraska penitentiary by Sheriff Merle Karnopp, right, of Lincoln on February 1, 1958. Bloodstains on the shirt are from minor wounds suffered during his Wyoming capture. (Photo by Don Ultang/AP Photo) Joan Kramiller of Detroit gets a bang out of the triple-tier machine gun which was designed by Leonardo Da Vinci, Renaissance artist and scientist. This model was constructed by Roberto Guatello and is one of 68 mechanical conceptions based on Da Vinci sketches which were on view at The Edison Museum in Dearborn, Mich., January 19, 1950. The machine gun has twelve guns in each tier. One tier was to be fired while a second was being loaded and the third was cooling. (Photo by Preston Stroup/AP Photo) 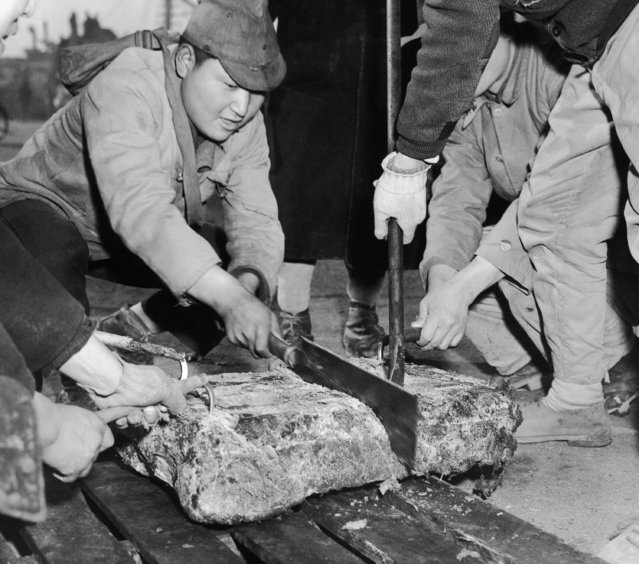 Frozen whale meat is cut into slabs for packing, at the Tokyo fishing wharves, January 27, 1948, after the whaler unloads its cargo from the Antarctic. (Photo by AP Photo) 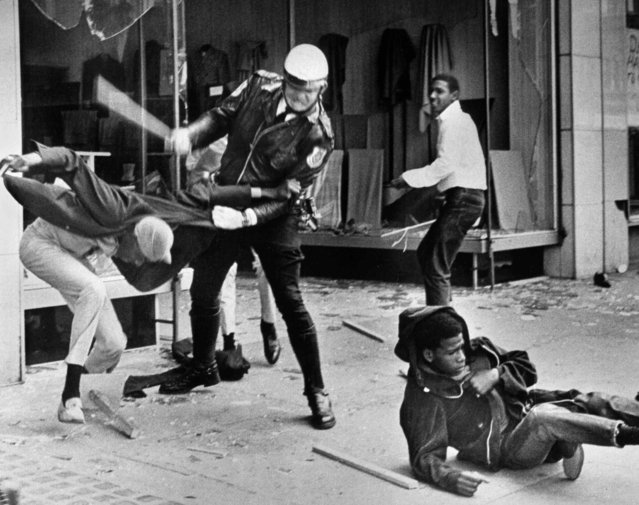 A police officer uses his nightstick on a youth reportedly involved in the looting that followed the breakup of a march led by Dr. Martin Luther King Jr. March 28, 1968, in Memphis, Tenn. Black leaders accused the police of brutality while police officers said they did what was necessary to restore order. In the wake of the violence, a curfew was imposed and more than 3,800 National Guardsmen were rushed to the city. A week later, King was assassinated at Memphis' Lorraine Motel. (Photo by Jack Thornell/AP Photo) 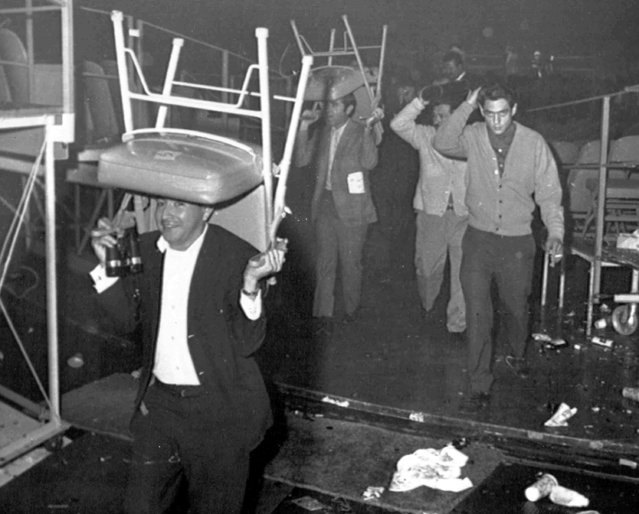 Fans use chairs to protect their heads as they flee from the Forum in Los Angeles, USA, December 7, 1968, after a riot broke out following the fight between Lionel Rose of Australia and Chucho Castillo of Mexico. Castillo's fans were angry over the result of a split decision in favor of Rose and created havoc in the arena. (Photo by AP Photo) 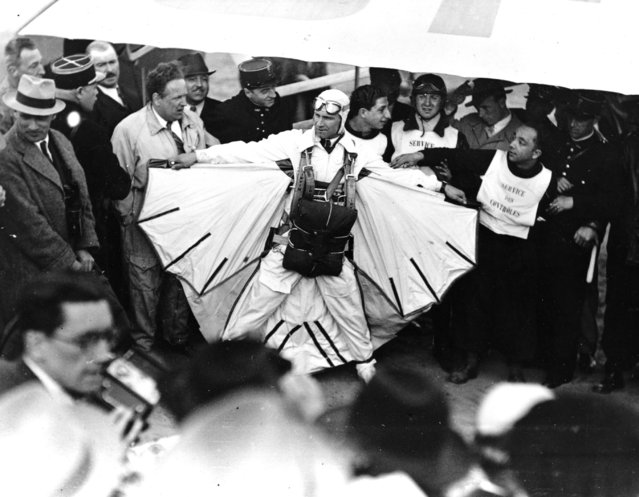 Clem Sohn is shown before entering the airplane for his exhibition parachute jump in Paris, April 25, 1937. The American “Bird Man” leaped from an airplane at a height of 10,000 feet when his first parachute failed to open, crashing to the ground before his second parachute had time to open. (Photo by AP Photo) 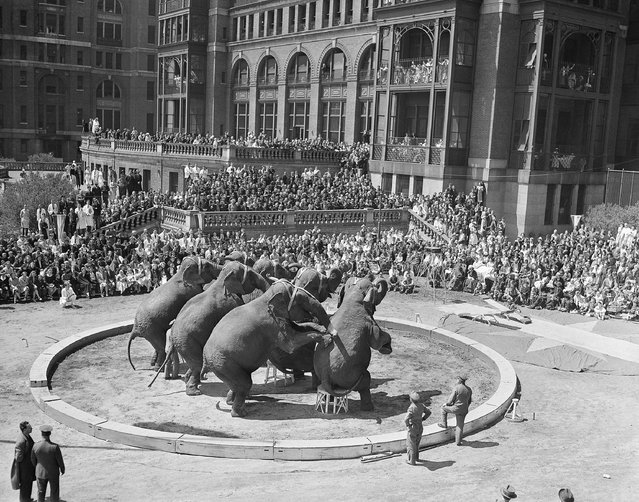 Interest centers on an elephant act, as the Ringling Brothers and Barnum & Bailey Circus gives a 12-act performance outdoors for patients at Bellevue Hospital in New York, April 25, 1941. More than 5,000 persons were in attendance. (Photo by AP Photo) 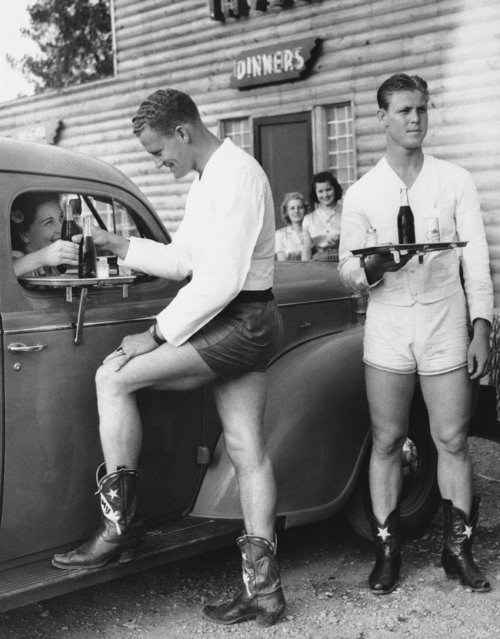 Bowing to the demands of Dallas women who object to girl car-hops in shorts, one large roadside stand, hired four six-footers garbed in shorts and cowboy boots in Dallas, Texas, April 27, 1940. Above Joe Wilcox serves Pauline Taylor, who smiles her approval of the idea. Bound for another car is James Smith at right. (Photo by AP Photo) 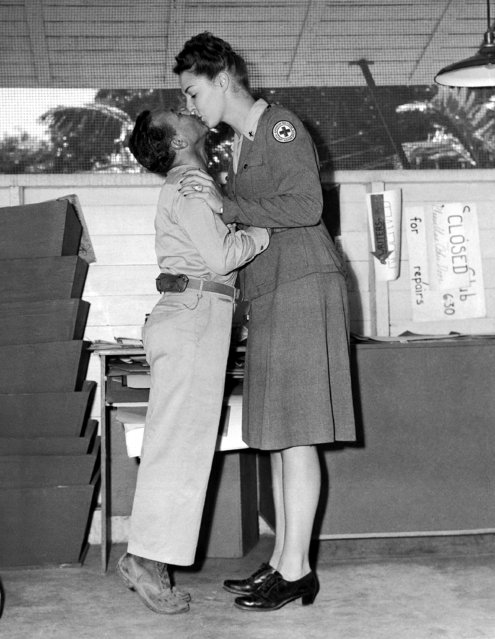 A former showgirl, Elizabeth Johnstone of Minneapolis, who is with the Red Cross in New Caledonia, gives little Jackie Heller of Pittsburgh a kiss on May 18, 1944. It was to celebrate his birthday and his first year overseas with a USO entertainment unit. Jackie is five feet, one inch: Miss Johnstone, a University of Minnesota graduate in the ’43 class, is six feet. She was in Billy Rose's Aquacade and in the Earl Carroll Vanities. (Photo by Frank Filan/AP Photo) 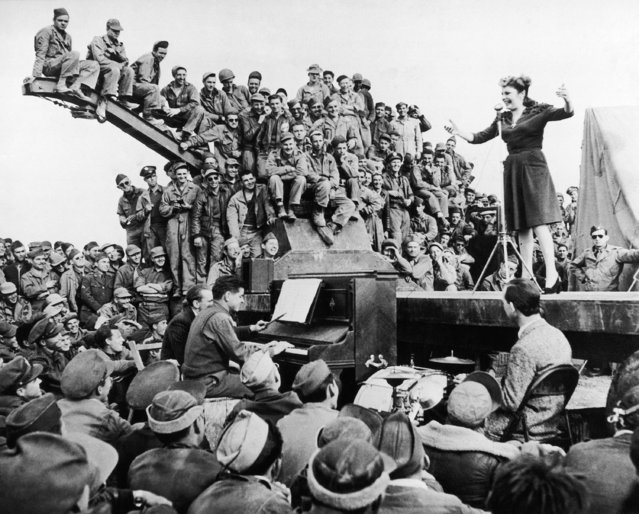 Flinging wisecracks, and singing hot songs from the home front in the good old U.S.A., Martha Raye, comedy actress, entertains men of the U.S. Army 12th Air Force on a makeshift stage on the edge of the Sahara Desert in North Africa, March 3, 1943. Some of these soldiers had just returned from a tough assignment to bomb bizerte, Tunisia. Martha was one of four American girls who toured the fighting front. (Photo by AP Photo) Mickey Rooney, 18-year-old film actor, singer and dancer, plants his hands into the cement next to his footprint and signature in the forecourt of Grauman's Theater on Hollywood Boulevard during induction ceremonies in Hollywood, Ca., on October 19, 1938. (Photo by AP Photo) 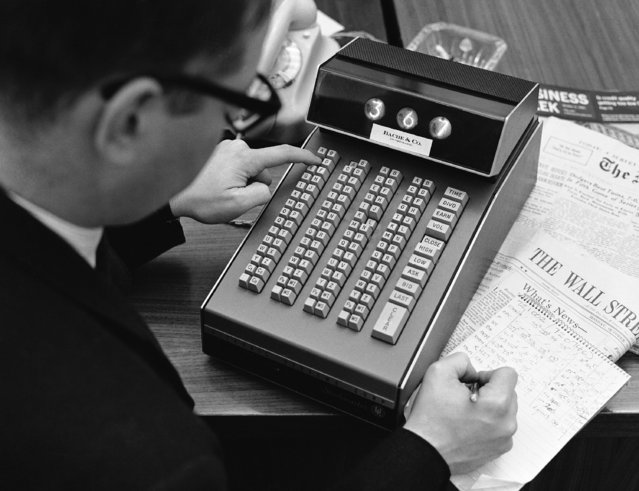 Latest Wall street reports can be made available in seconds with this device which a New York broker installed in his Frankfurt subsidiary, October 26, 1965. The device is linked directly with a New York computer. Client pushes buttons; a two letter combination stands for each important company Wall street deals with. Scale shows figures asked for. For example high and low course, last dividend, last earnings. (Photo by AP Photo) 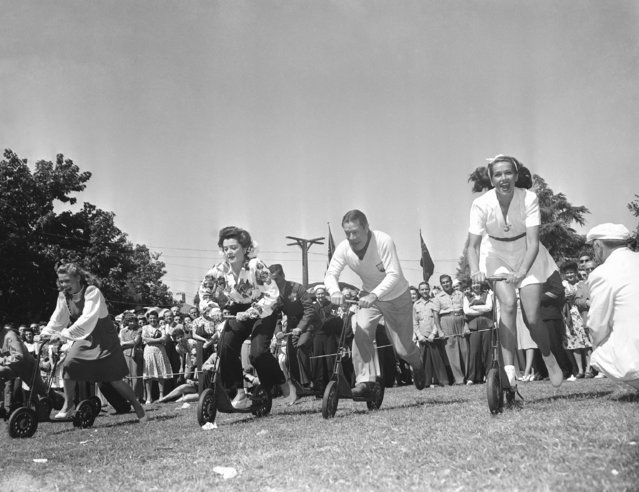 Five thousand volunteer workers, including many film players, who have given their time providing entertainment for a million service men, during the past year, at the Hollywood canteen gathered recently on the grounds of the Barney Oldfield country club and relaxed in the fun of a good old-fashioned picnic on September 7, 1943 in Los Angeles. This photo shows the start of a scooter race, which included (left to right) Grace McDonald, Ann Rutherford, Joe E. Brown and Jinx Falkenberg. None of whom were even close at the finish line. (Photo by AP Photo)