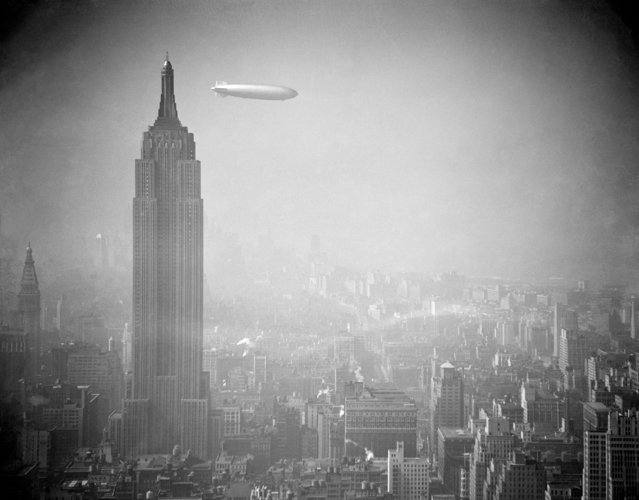 The Zeppelin Hindenburg floats in a hazy sky near the Empire State Building over Manhattan, August 8, 1938. The German airship is en route to Lakehurst, N.J. from Germany. (Photo by AP Photo) 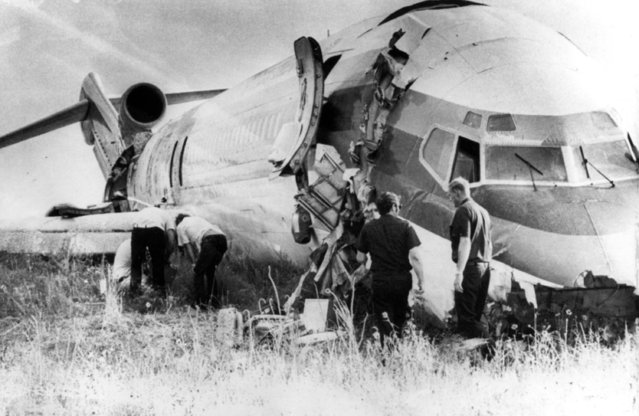 A Continental Airlines 727 crashed on its belly at Stapleton International Airport in Denver, Colorado, August 8, 1975. The crash impact cracked the nose and tail sections of the plane. There were no fatalities from the crash on takeoff. (Photo by AP Photo) 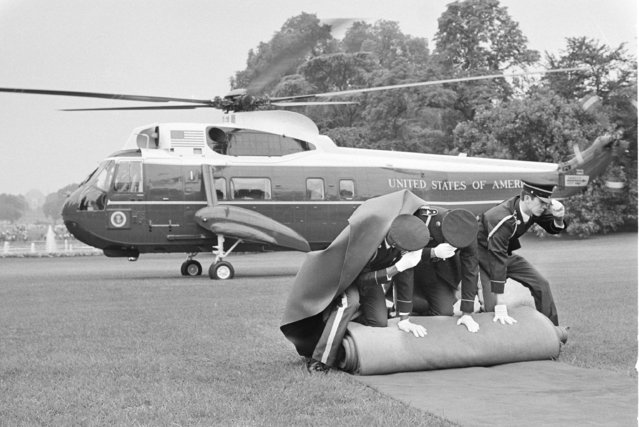 Member of the honor guard hold down the red carpet as the helicopter carrying Richard M. Nixon from the White House prepares to lift off from the grounds on Friday, August 9, 1974. After a farewell speech to members of the White House staff Nixon departed for California. (Photo by AP Photo) 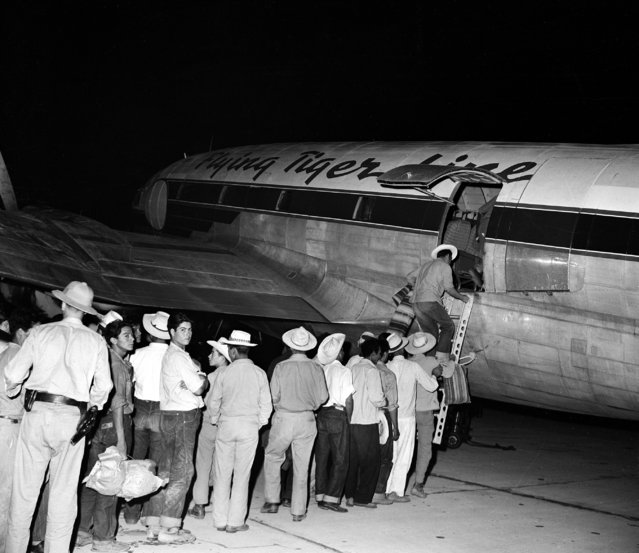 A group of illegal Mexican migrant workers are seen as they board a Flying Tiger airliner at Holtville, near El Centro, Calif., August 11, 1951, to be deported to their homes, some 1200 miles south of the U.S. border. Three planes, each carrying 60 deportees, leave at night so they will arrive at their destination at daybreak. U.S. immigration service inaugurated this system of air deportation early in June this year, with planes contracted by the U.S. Immigration Service commercial organization. (Photo by AP Photo) 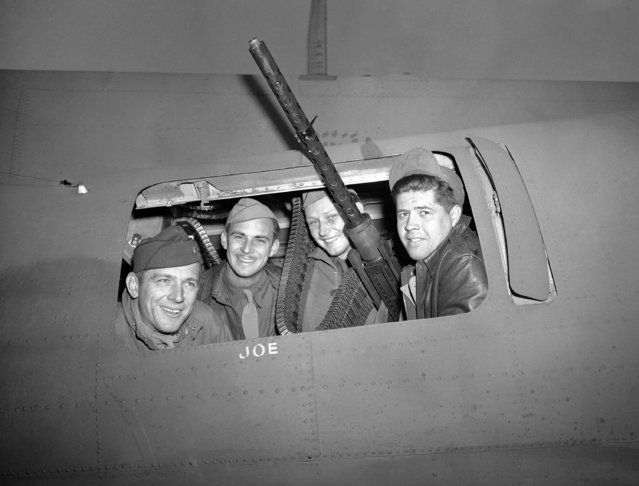 Four members of the crew that accompanied General Ira Eaker when he led the All-American bombing flight on German held Rouen, August 17, 1942, smile from the waist-gun port after their safe return. (Photo by AP Photo) 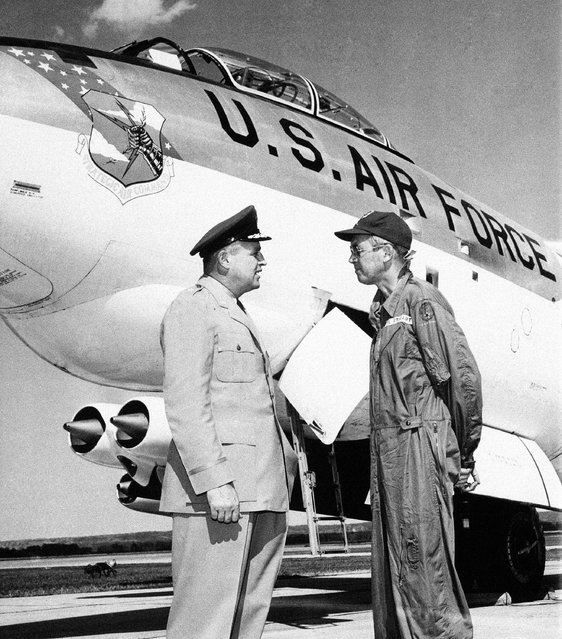 Actor Jimmy Stewart, fresh from handling the controls of B-47 jet bomber for the first time, reports to Brig. Gen. William H. Blanchard, Strategic Air Command deputy director of operations, at Offutt Air Force Base, Omaha, Nebraska on July 11, 1956. Stewart, a reserve colonel who flew in to begin a two week duty tour, said the bomber “flies like a bird”. (Photo by AP Photo) 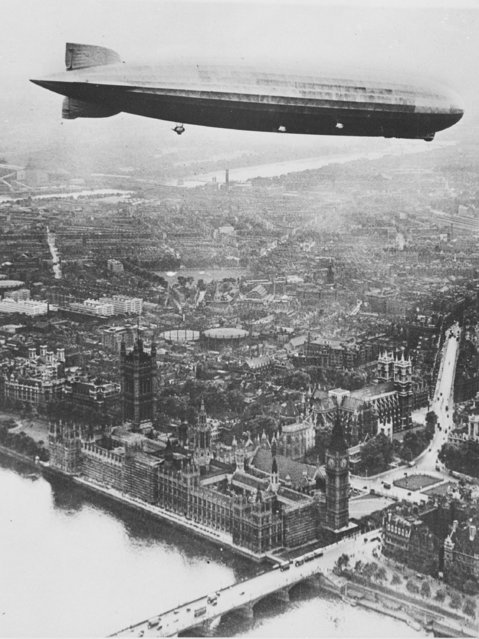 The German dirigible Graf Zeppelin flies over central London, July 12, 1932. In view are the River Thames, Westminster Bridge and the Houses of Parliament. (Photo by AP Photo) 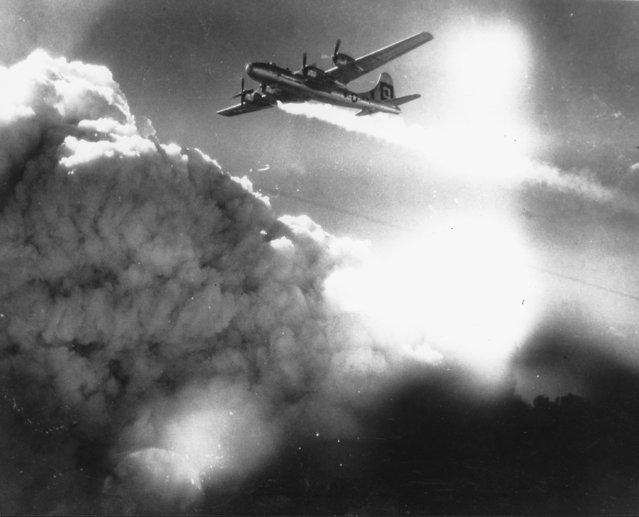 In flight over the Japanese city of Kobe, a U.S. Army Air Forces B-29 Superfortress trails smoke and fire, on July 17, 1945. (Photo by AP Photo) 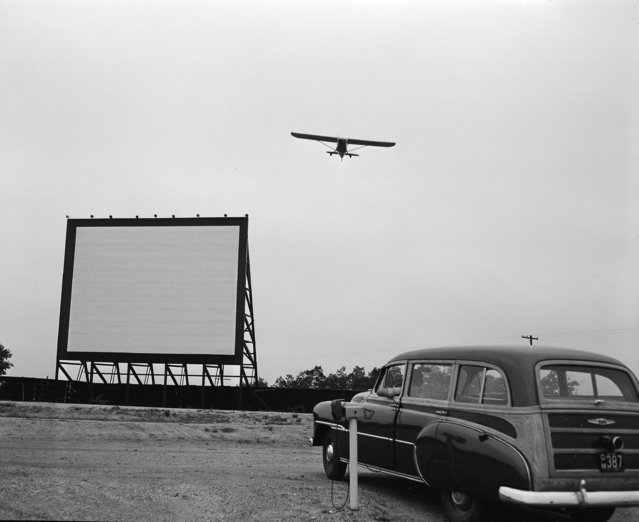 A plane comes in for a landing over the movie screen at the Fly-In Drive-In Theater in Farmingdale, N.J., July 20, 1951. The idea of combining fly-in facilities with drive-in parking space originated with Ed Brown, a World War II Navy flier and owner of an airport in Farmingdale. Movie- bound planes land at the airport, then taxi a few hundred feet down a special runway to the theater. Fliers come to the theater from a radius of a hundred miles, according to Brown. (Photo by Ed Ford/AP Photo) 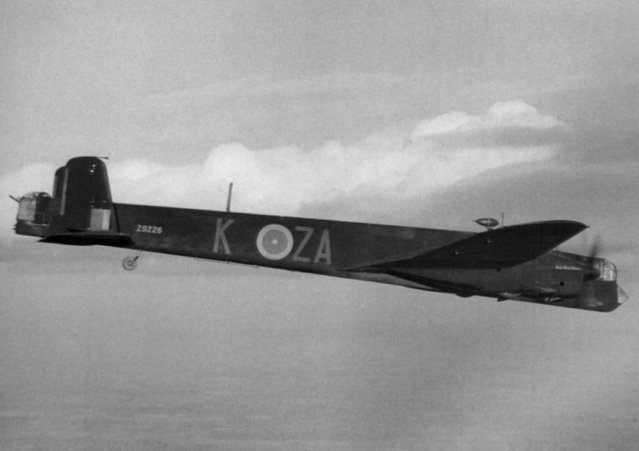 The Whitley heavy bomber, seen on it, way to raid enemy territory, June 2, 1942, is powered with twin Rolls-Royce Merlin engines, which attain a speed of 245 m.p.h. It has a range of approximately 1800 miles and a ceiling, service, of 23,000 feet. The undercarriage is retractable on the Whitley; wing span is 84 feet, length 69 feet, 3 inches. It carries a crew of five. The formidable defensive armament, housed in power-operated turrets in the nose and tail, is composed of one forward gun and four rear guns. (Photo by AP Photo) 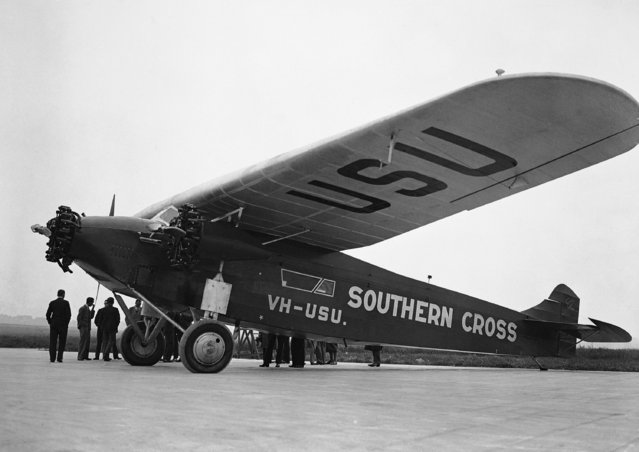 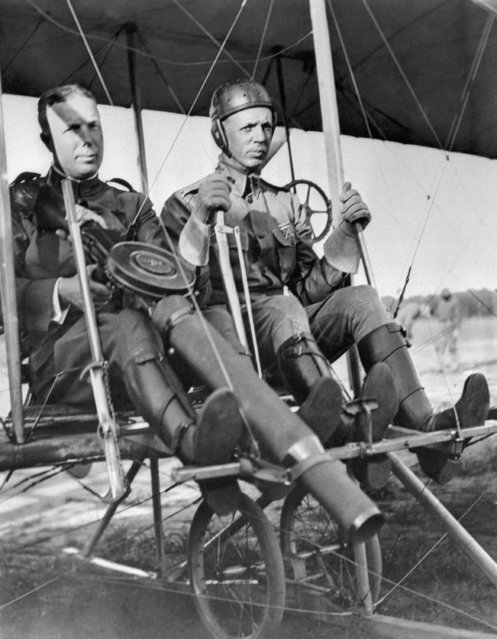 Capt. C.D. Chandler handles a machine gun, while Lt. Roy T. Kirtland is at the controls of the plane in in College Park, Maryland on June 7, 1912. It is the first time a machine gun is carried on a plane. (Photo by AP Photo) 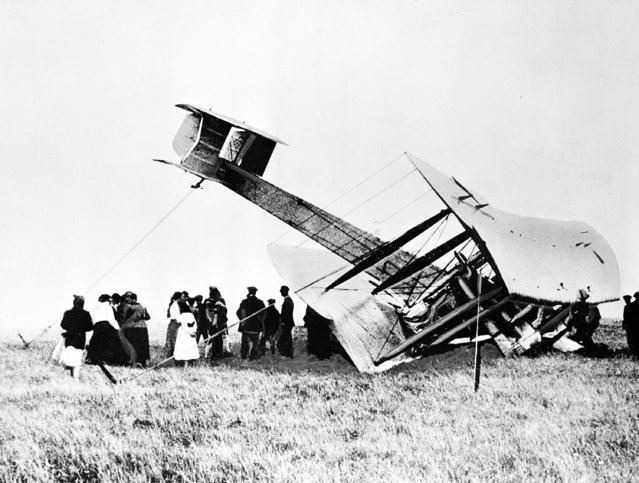 Aviation pioneers John Alcock and Arthur Whitten Brown crash-land their Vickers Vimy aircraft in a bog near the wireless station at Clifden, Ireland, on June 15, 1919, after they complete the first nonstop transatlantic flight from St. Johns, Newfoundland, to the Irish coast. (Photo by AP Photo) 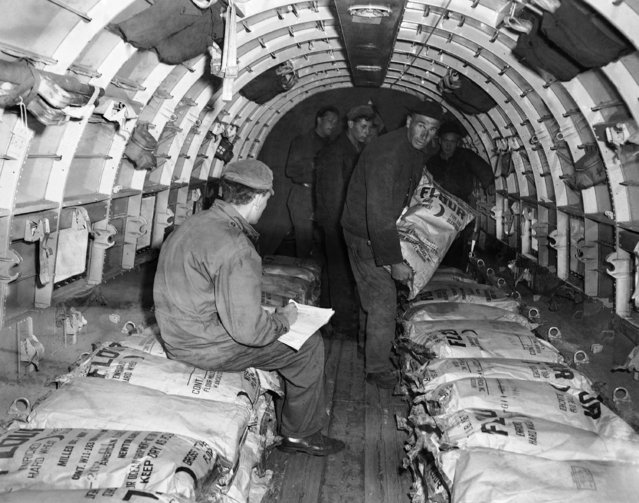 An American soldier of the air force checking loading list while a polish worker adds another sack of American flour to others already packed inside a C-47 transport plane at Frankfurt's Rhein-Main Airport, June 29, 1948, main base for the supply of Berlin by air. (Photo by Hanns J. Jaeger/AP Photo) 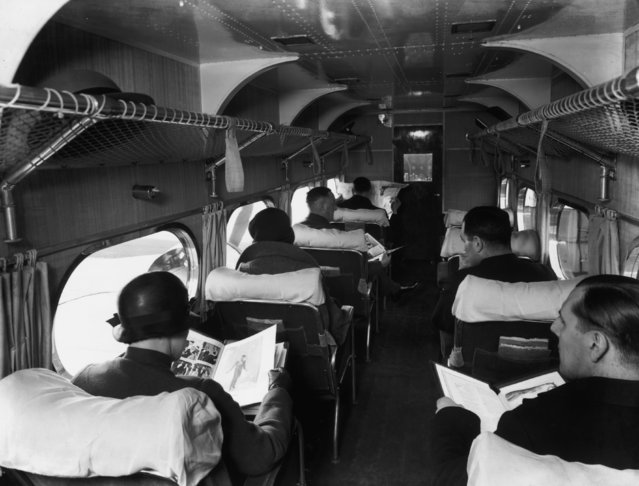 Passengers settling down for their journey on an Air France plane, 1935. (Photo by Fox Photos/Getty Images) 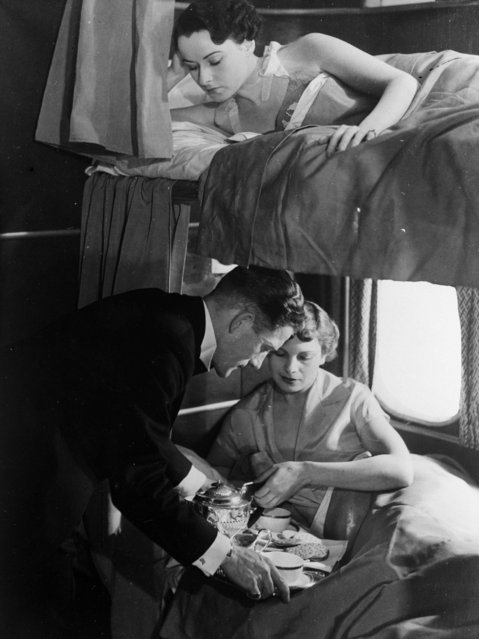 A steward aboard the giant flying-boat, “Canopus” serves breakfast to a passenger in a lower bunk while a woman in an upper berth waits, 1936. The Canopus belonging to Imperial Airways is on the Alexandria-Athens service. It can cruise at 200mph and carries 16 passengers in night stages. (Photo by General Photographic Agency/Getty Images) 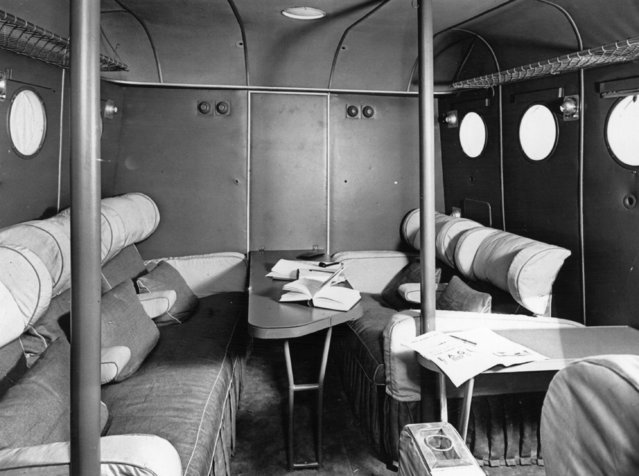 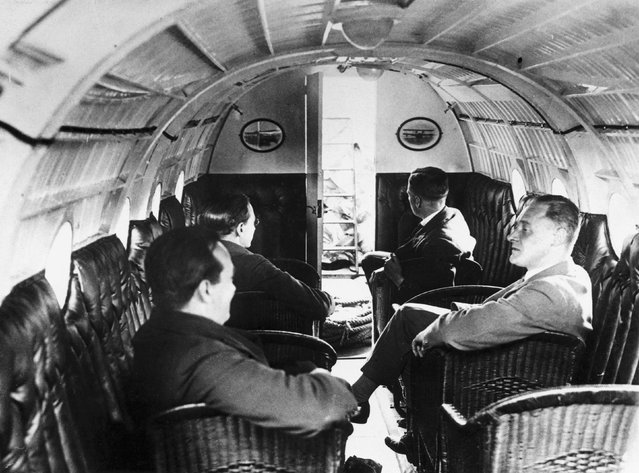 R.J. Mitchell (1895-1937) sitting foreground right in the main cabin of a Supermarine Swan II, c 1920s. Trained as an engineer, Mitchell was led by his interest in aircraft to join the Vickers Armstrong Supermarine Company in 1916, where he soon became chief designer. He designed world- beating sea-planes for the Schneider Trophy races (1922-1931) and later the famous Spitfire, the triumph of which he did not live to see. He also designed the Swan. (Photo by Daily Herald Archive/SSPL/Getty Images) 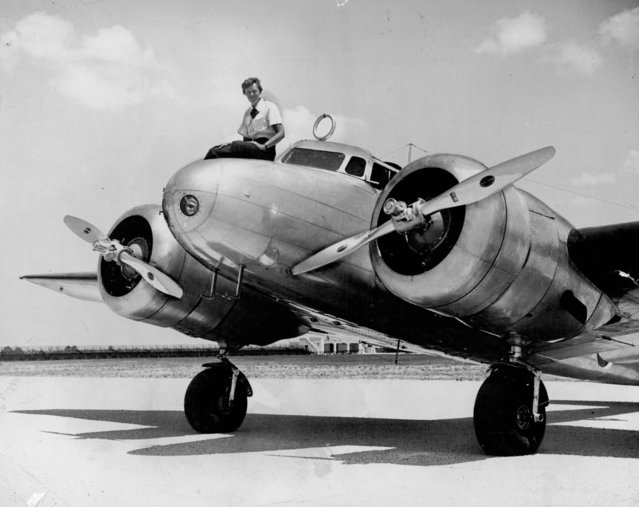 This 1937 photo shows Amelia Earhart before takeoff in Miami for an attempted round-the-world flight. Earhart and her navigator, Fred Noonan, disappeared in the South Pacific in July 1937, while on one of the last legs of that journey. (Photo by The Miami Herald via AP Photo) 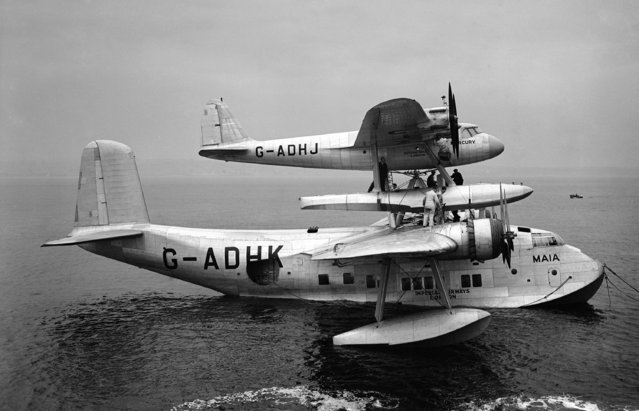 Mercury and Maia, fueled and overhauled, are waiting in the Tay at Dundee, for favorable weather to start the flight to the Cape, a distance of 6,370 miles. The composite machine moored in the Tay River, at Dundee, on September 23, 1938. (Photo by AP Photo)
Edit Del
04 Oct 2017 06:59:00, post received 0 comments
Publication archive:
←   →
Popular tags:
All tags
Last searches: