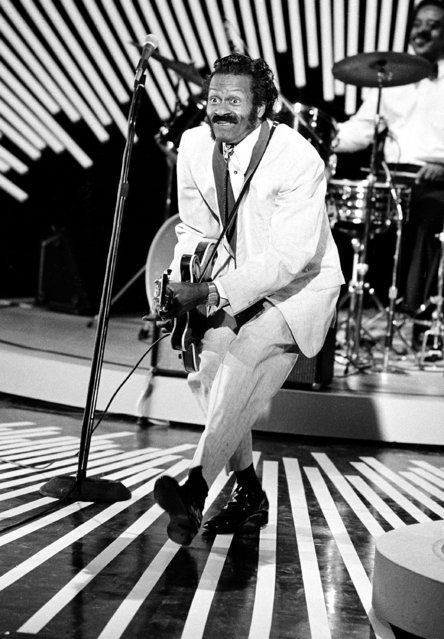 American guitarist and singer Chuck Berry performs his “duck walk” on stage as he plays his guitar on April 4, 1980. The location is not known. (Photo by AP Photo) 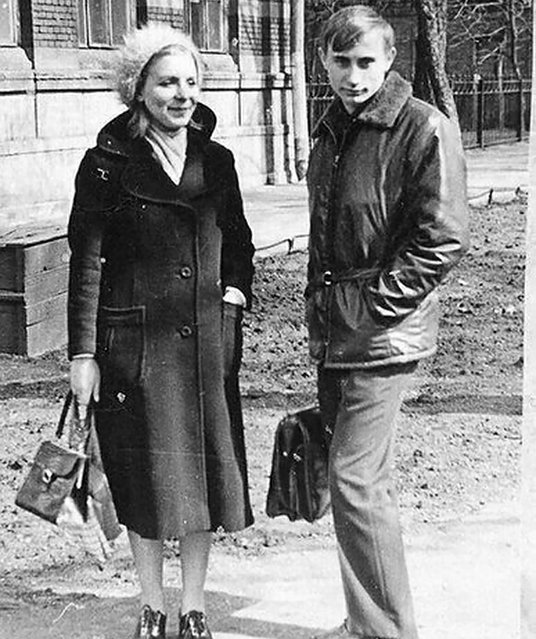 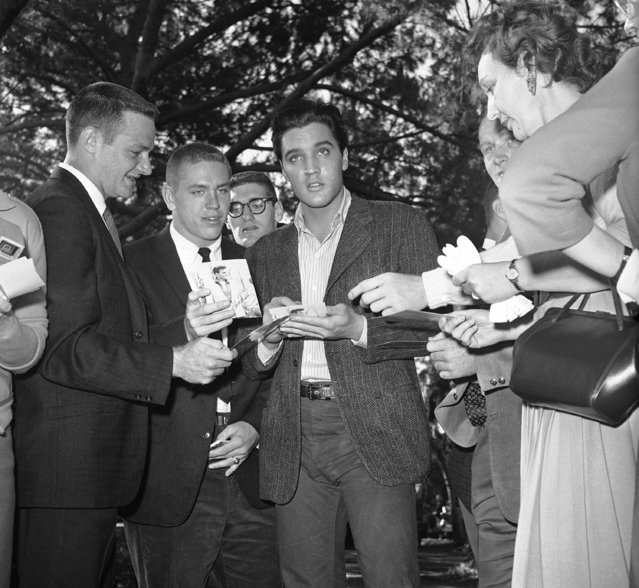 Members of Duke University's football team cluster around Elvis Presley for his autograph during a visit to Twentieth Century-Fox studio where Presley is making a movie in Hollywood, on December 2, 1960. (Photo by Ellis R. Bosworth/AP Photo) 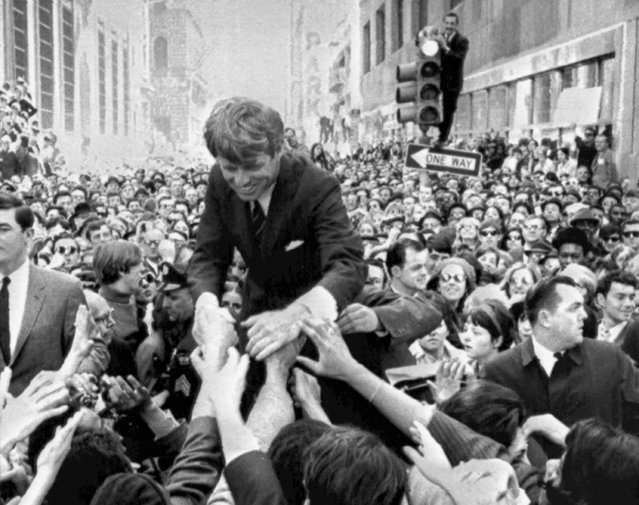 In this April 2, 1968 file photo U.S. Sen. Robert F. Kennedy, D-NY, shakes hands with people in a crowd while campaigning for the Democratic party's presidential nomination on a street corner, in Philadelphia. Nearly 50 years after Robert F. Kennedy's assassination, a new documentary series on his life and transformation into a liberal hero is coming to Netflix. “Bobby Kennedy for President” produced by RadicalMedia, Trilogy Films and LooksFilm launches Friday, April 27, 2018, on Netflix. (Photo by Warren Winterbottom/AP Photo) 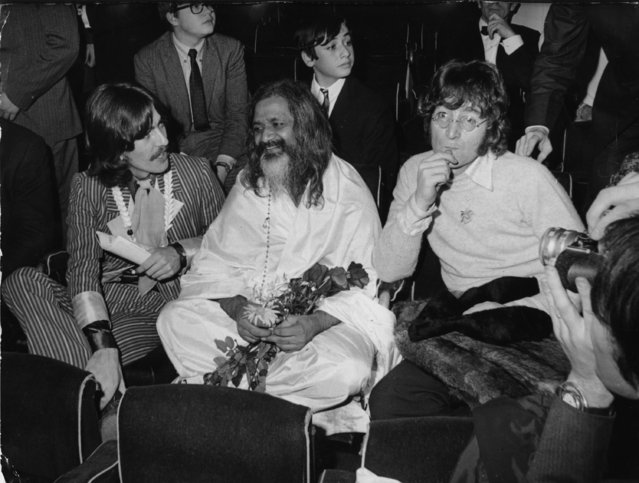 Maharishi Mahesh Yogi, considered as the “spiritual father” of the Beatles sits amidst George Harrison, left and John Lennon, during the UNICEF gala at the Palais du Chaillot in Paris, December 15, 1967. (Photo by AP Photo) 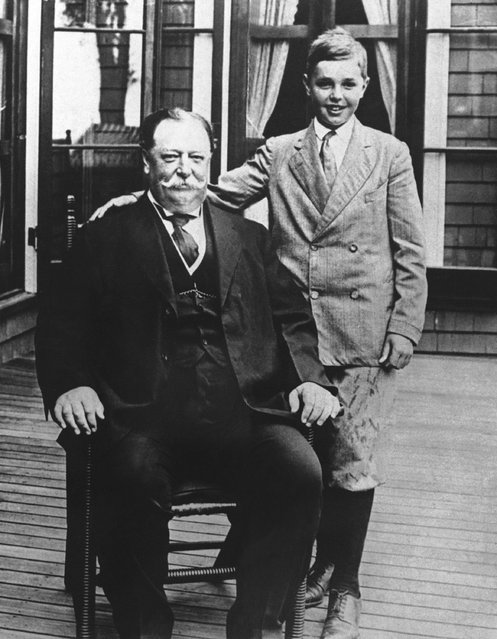 A picture of the former Chief Justice Taft, with his son Charles taken when Taft was President. Photo shows them at the вЂњsummer White HouseвЂќ at Beverly, Massachusetts on February 3, 1930. (Photo by AP Photo) 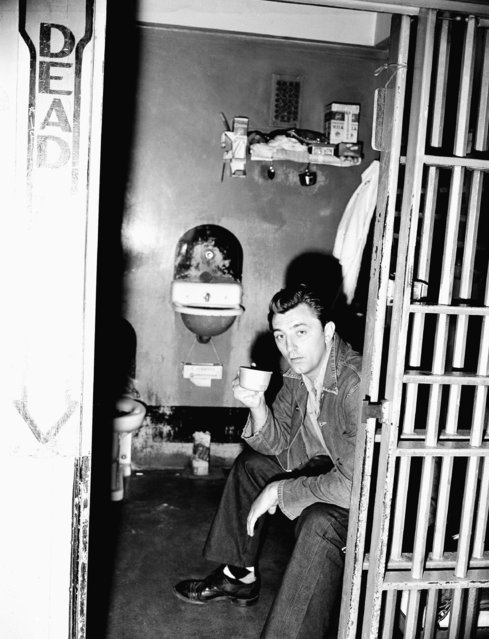 Movie star Robert Mitchum sips a cup of soup in his cell in the Los Angeles County jail as he begins a 60 day sentence for conspiracy to possess marijuana. A faded blue denim shirt replaced the natty business suit he wore to court on February 10, 1949, but he still had on his own argyle socks. (Photo by Harold Filan/AP Photo) 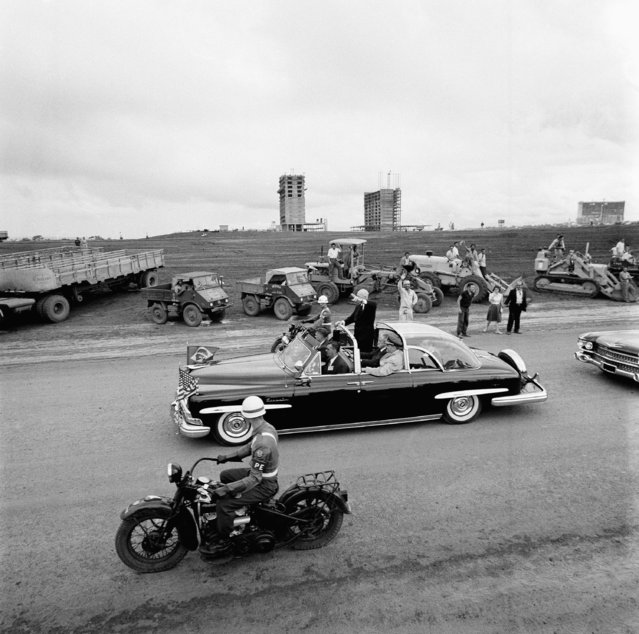 President Eisenhower stands in the back of car and waves as he rides past building under construction in Brasilia, new capitol city of Brazil, February 23, 1960 for his welcoming reception. Workers manning construction vehicles pause in their tasks to wave in return. (Photo by AP Photo) Alfred Hitchcock, Hollywood's Whodunit King, spends two hours at London Airport, United Kingdom, on January 6, 1963, during a stopover on a flight to New York. Hitchcock is returning to America from Zurich. During the stopover he took the opportunity to confer with a London-based business associate. (Photo by AP Photo/Boy) 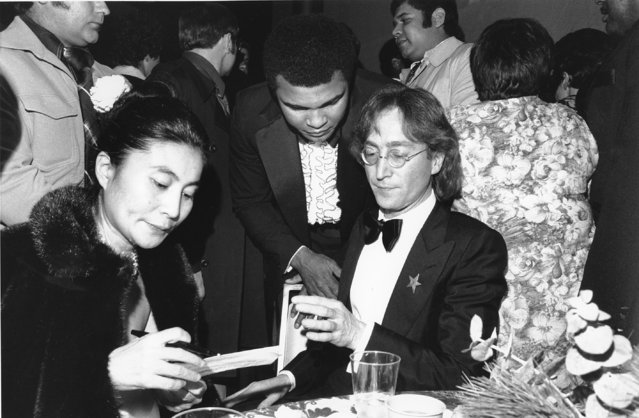 John Lennon and his wife, Yoko Ono, left, are shown with heavyweight boxer Muhammad Ali, center, at the Kennedy Center for the Performing Arts in Washington, D.C., on Januaary 20, 1977. They are at the gala honoring President-elect Jimmy Carter on the eve of his inauguration. (Photo by AP Photo) 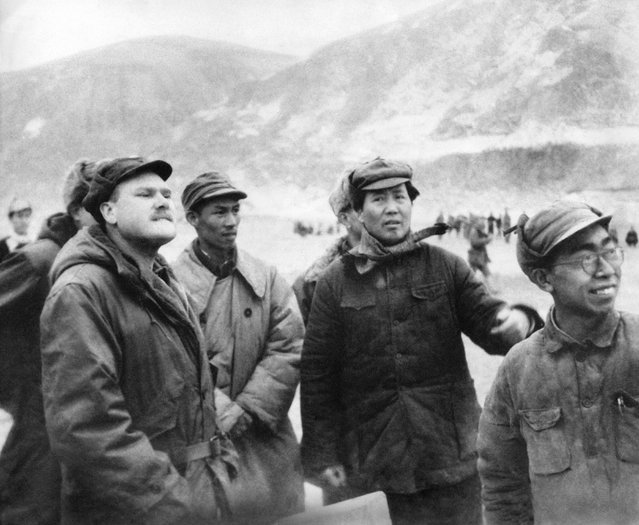 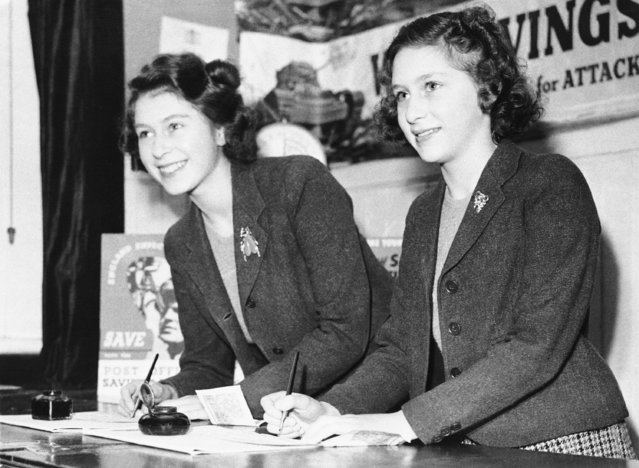 Princesses Elizabeth, left, and Margaret Rose sign their one-pound savings certificates after buying the first two as they were made available to the public, January 27, 1943. (Photo by AP Photo) 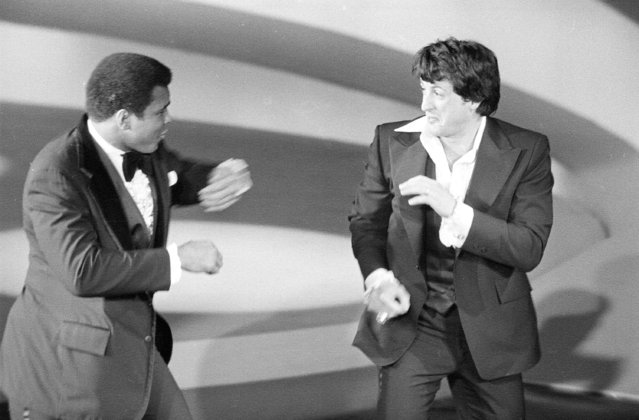 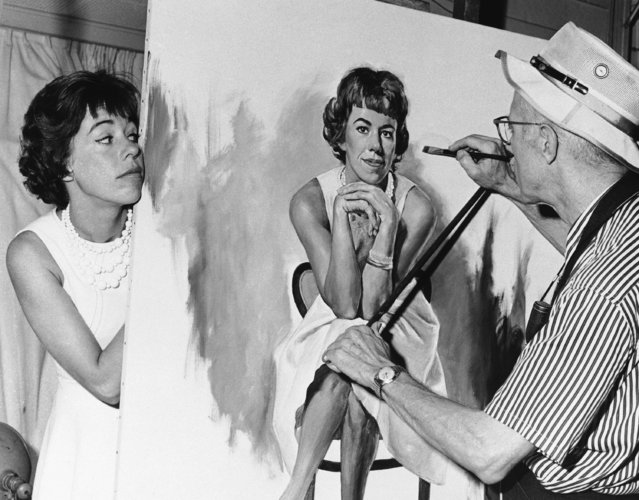 Actress-comedian Carol Burnett peeks around canvas to watch artist Dmitri Vails work on her portrait on January 9, 1963. The Dallas, Texas portrait painter has become well known as a painter of people in show business. (Photo by AP Photo) 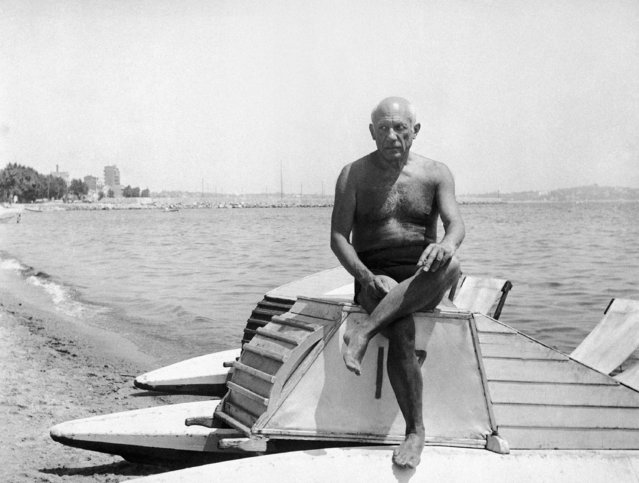 Pablo Picasso, famed 66-year-old Spanish artist who has lived most of his life in France, suns himself on a boat on the beach at Golfe Juan in Vallauris on the French Riviera on March 10, 1948. Entering a new period in his varied artistic career, Picasso has turned to painting pottery at the nearby town of Vallauris. (Photo by AP Photo) 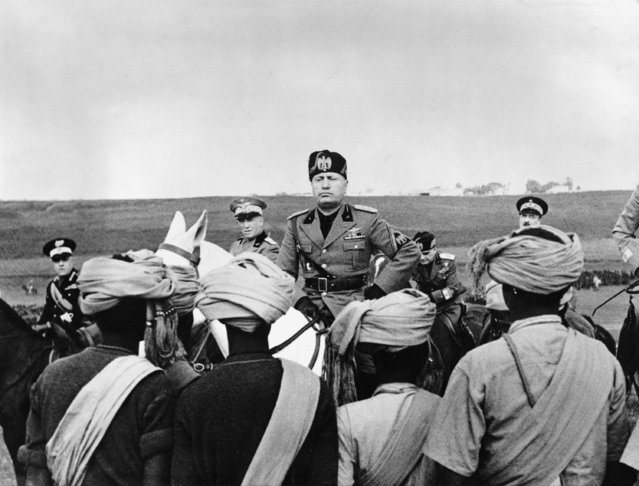 Italian Premier-dictator Benito Mussolini, center on horseback,addresses some of the troops from Italian Africa who are encamped on the outskirts of Rome, Italy, May 5, 1937. They are in Rome preparing for the celebration of the first anniversary of the Italian Empire, founded May 9, 1936. (Photo by AP Photo) 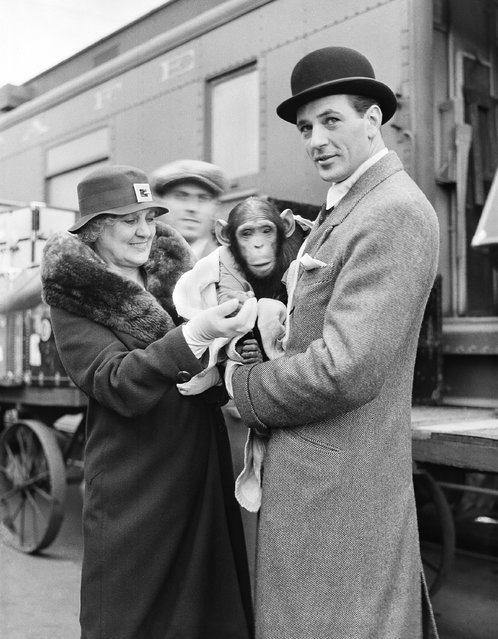 Back in the movie capital after an absence of 11 months during which he hunted big game in Africa, Gary Cooper, accompanied by a baby chimpanzee named Toluca, which he caught and tamed, is met at the train by his mother, Mrs. Alice Cooper, as he arrived to resume him film career in Los Angeles on April 27, 1932, which will get under way with the filming of вЂњThe Devil and the DeepвЂќ for Paramount. (Photo by AP Photo) 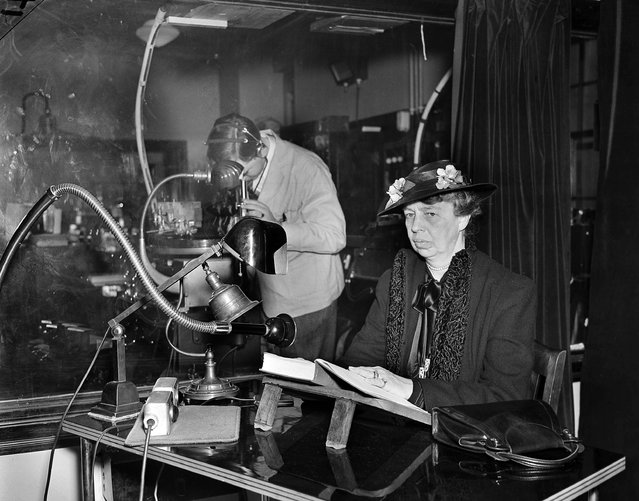 A talking record is made by First Lady Eleanor Roosevelt in New York, April 27, 1938. At left is recording engineer Leo Phillips. She had read the first chapter of her book “This Is My Story” for the recording and a professional reader will make the rest as a вЂњTalking BookвЂќ for the blind. (Photo by AP Photo) 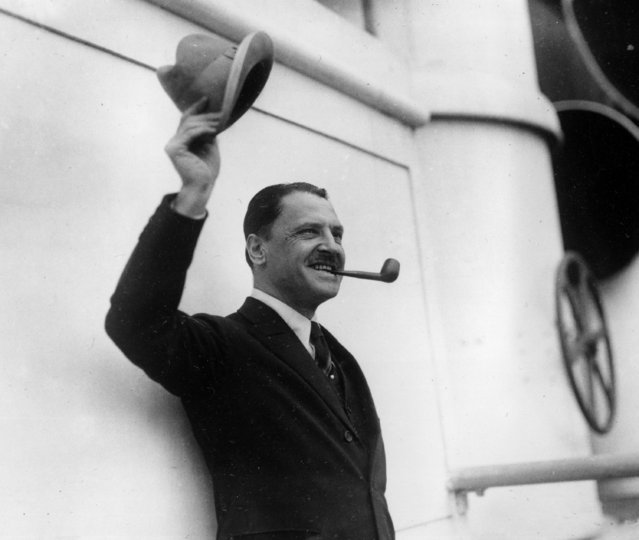 British novelist and playwright W. Somerset Maugham waves farewell as he leaves from New York for Europe aboard the ocean liner Aquitania, on May 22, 1923. Maugham's play “Rain” is having a successful run on New York City's Broadway. (Photo by AP Photo) 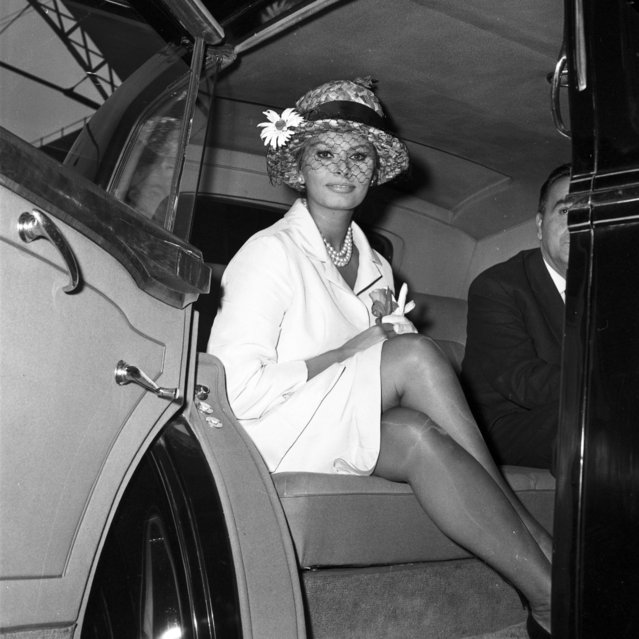