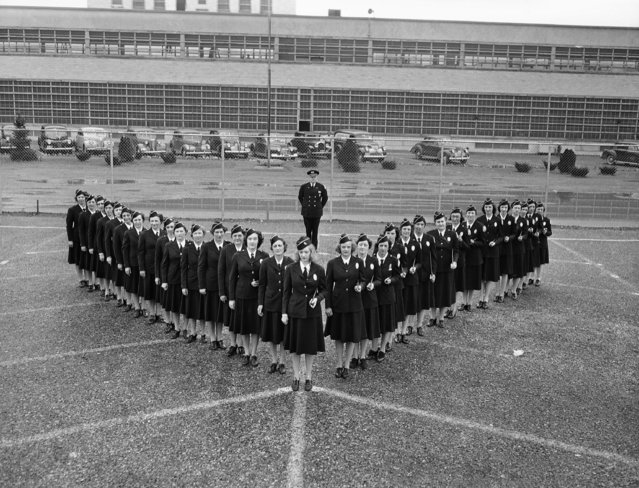 Capt. W.G. Noble (center), director of a contingent of women who guard the Hagerstown, Md., plant of Fairchild Aircraft, joins his charges in a victory salute between shifts at the plant, May 22, 1942. The company is making training planes for the nation's air services. (Photo by AP Photo) 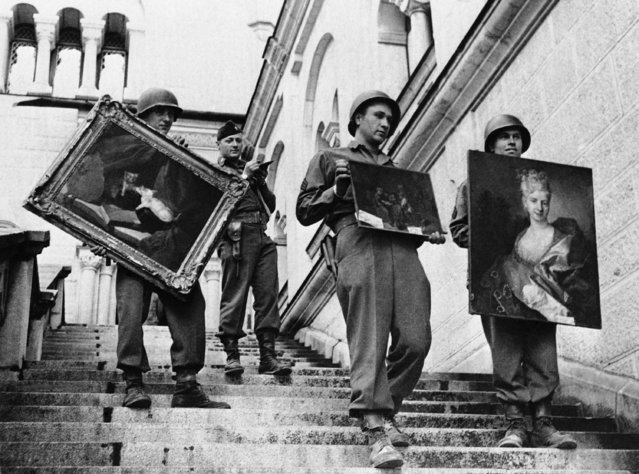 American soldiers remove some of the paintings that were found among the loot the Germans had gathered in Neuschwanstein Castle, at Fussen, Austria, near the Swiss frontier, May 22, 1945. The castle was captured by units of the U.S. 7th Army. The paintings were the Weissman collection, and a portrait of a lady marked “Rothchild collection 16th described (left to right) as being: a picture of a “Cat and Mirror”, Brouver, belonging to century”, but otherwise unidentified. (Photo by AP Photo) 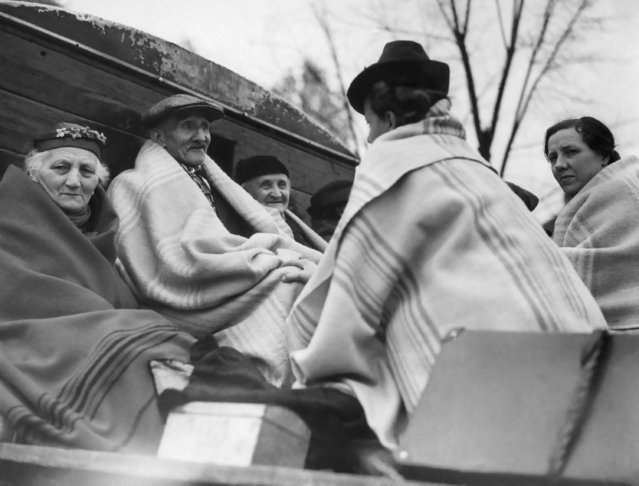 Belgian civilians, wrapped in blankets, are being evacuated after their homes had been bombed by German airmen, May 17, 1940. (Photo by AP Photo) 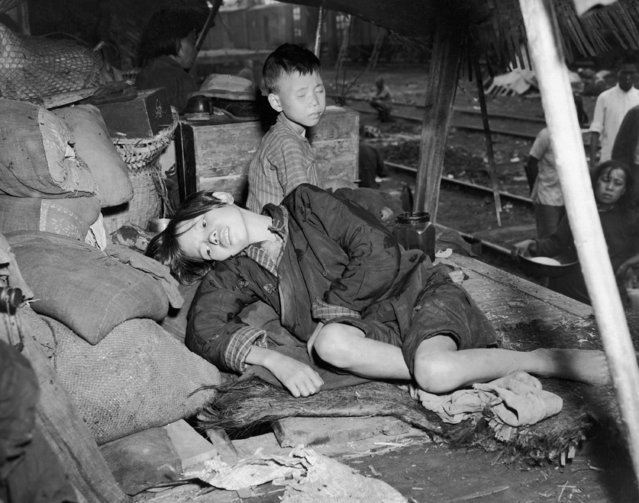 So tired that he can't keep his eyes open, one refugee child goes asleep sitting up straight while the other, ill from lack of food, lolls back on the sacks carrying the family belongings and tries to get some rest in China, January 11, 1944. Soon the family will be on the move again, in a truck or railroad car, or even on their own feet. (Photo by Frank Cancellare/AP Photo) 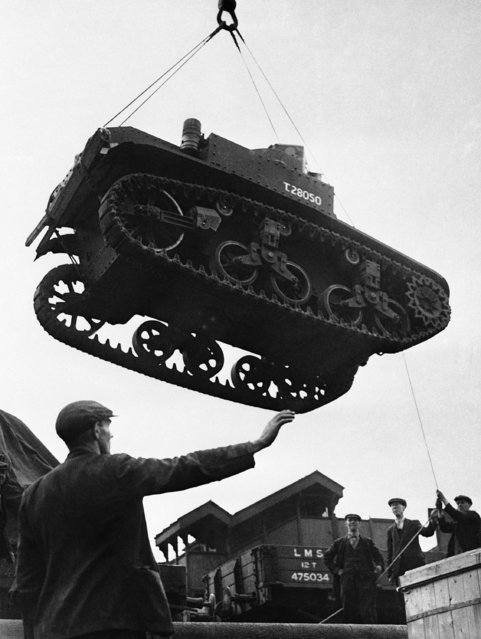 The dockyard Tic-Tic Man in the foreground gives the signal and other dockers guide an American tank to rest on a British quayside, pictorial evidence of the real help that America is giving the British war effort, July 8, 1941. The tank is being loaded on to an English railway wagon at a British port ready to be delivered to army headquarters. (Photo by AP Photo) 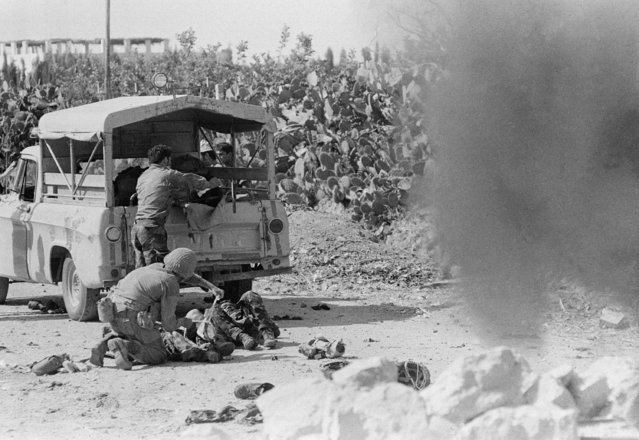 An Israeli soldier gives first aid treatment to men injured when a car full of newsmen was blown up by a booby-trapped stone barricade left by retreating Egyptians on the road to Gaza when it was taken by Israeli troops, June 6, 1967. (Photo by Kurt Strumpf/AP Photo) 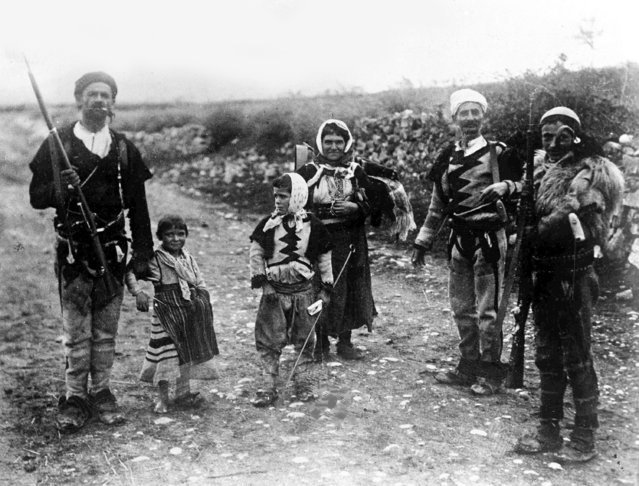 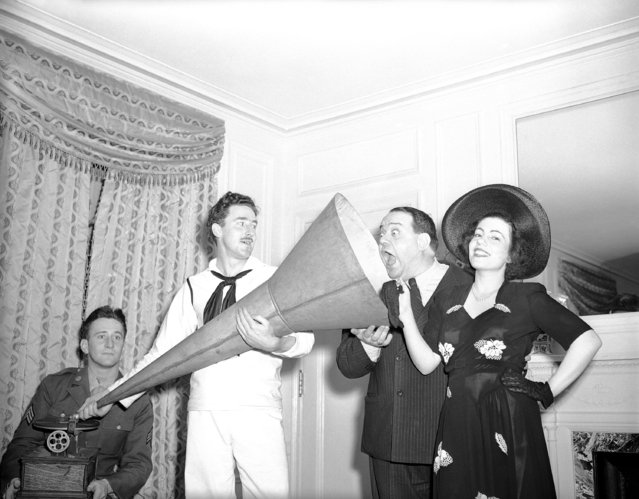 Dr. Fritz Reiner, noted symphonic conductor at the apartment in New York Tuesday, June 17, 1942 where the new organization called “Records for our fighting men”, of which he is one of the sponsors, dramatized its drive to collect some 37,000,000 used, scratched and old records lying in American attics and cellars. These will be sold to record manufacturers as scrap. The proceeds will then be used to purchase new records, which will be shipped to all service camps for our fighting boys. Salvatore Bacoalon and Suzanne Sten, Metropolitan opera stars, are shown making a recording in an antique cornucopia horn into which the great Caruso actually recorded. On the left is sergeant seaman first class Norman Thomas and me. (Photo by Matty Zimmerman/AP Photo) 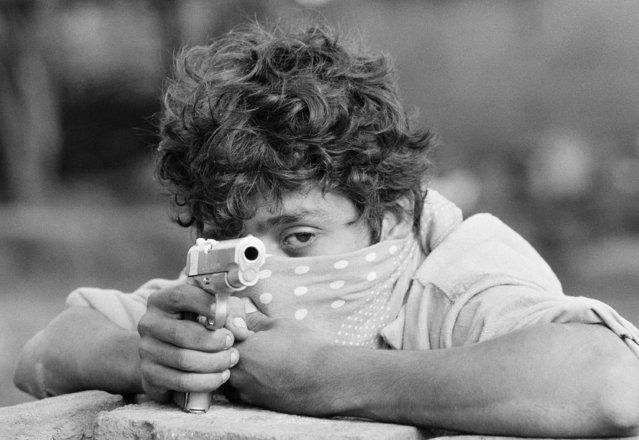 A young Sandinista guerrilla takes aim with his 45 pistol as he stands waiting to do combat with the Nicaraguan National Guard in Managua June 23, 1979. The guerrillas still occupy major parts of the Capitol City. (Photo by McLendon/AP Photo) 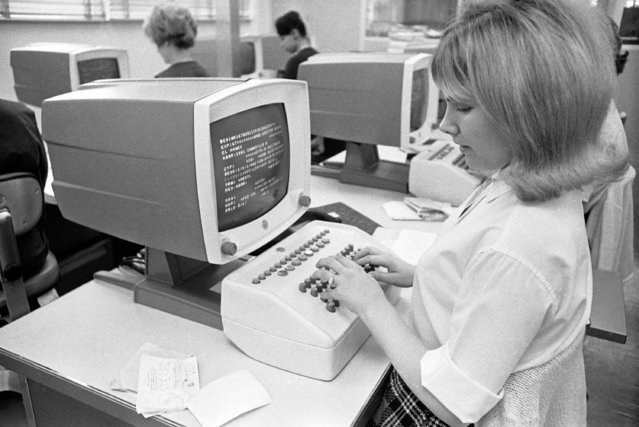 Cindy Frink, a Video Data Interrogator operator for California's Department of Motor Vehicles, demonstrates a key machine in the department's planned computer system at Sacramento, Calif., October 20, 1966. The operator types all information about licenses, traffic records and ownership into a computer, which stores it on magnetic tape “flakes”. Similar video screens or automatic transcribing machines will be installed in DMV and law enforcement offices in major metropolitan centers. When information is wanted it can be immediately transmitted from the computer center in Sacramento to their offices by dialing a code. (Photo by AP Photo) 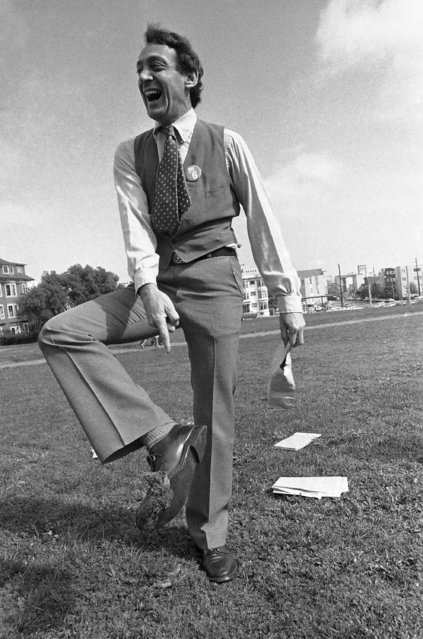 Supervisor Harvey Milk called the press together in San Francisco on October 20, 1978 to demonstrate (using artificial dog droppings) how pet owners could obey the city's new anti-litter law, left, by scooping up the dropping. All went well until Supervisor Milk found he had accidentally stepped into some real dog dropping. (Photo by James Palmer/AP Photo) 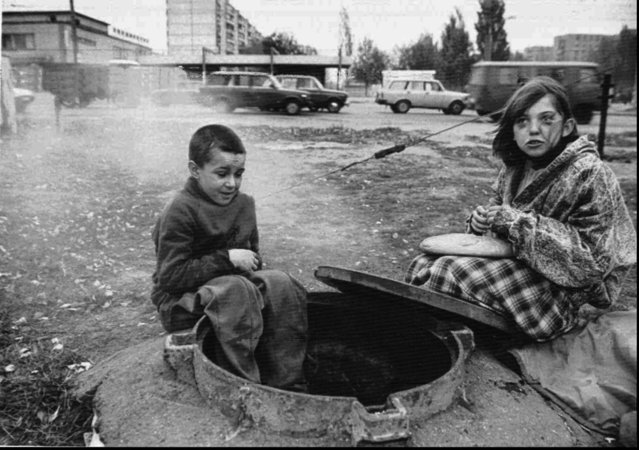 Dima, 9, left, and his sister Oksana, 13, sit near a sewer where they spend nights, in Kharkov, Ukraine, Friday October 20, 1995. The children's father is in a prison and their mother is an alcoholic who is unable to care for them. The children spend the day in the city's railway station and sleep in the sewer because it provides a shelter from cold weather. Most of the social programs in the Ukraine have been severely cut back by the Ukrainian government because of an economic crisis in the country. (Photo by Sergey Dolzhenko/AP Photo) 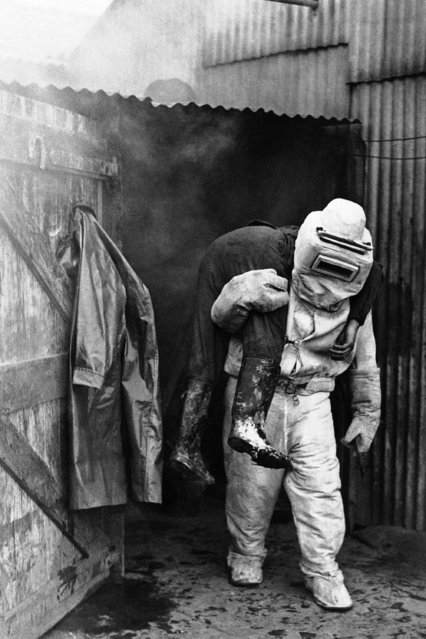 Rehearsing somewhere in England, an asbestos-suited soldier carries a victim from a burning shed, October 24, 1941. Soldiers are being trained for air raid precautions work in bombed areas. (Photo by AP Photo) 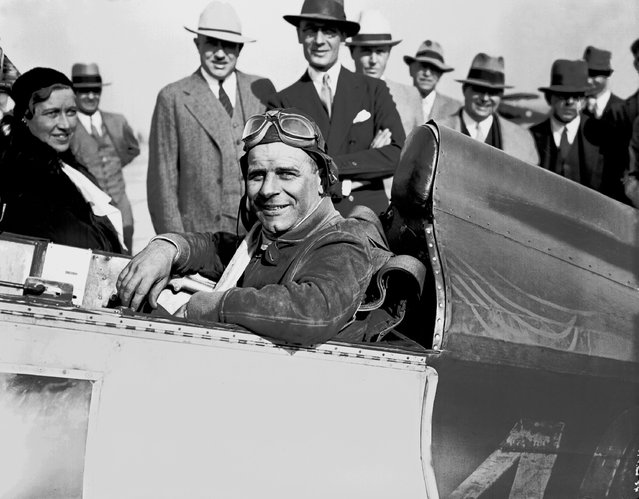 Maj. James (Jimmy) Doolittle smiles from the cockpit after landing in St. Louis, MO., on October 26, 1931 after a record breaking flight of 6 hours 33 minutes. Doolittle averaged about 230 miles per hour for the 1,500-mile trip. (Photo by AP Photo) 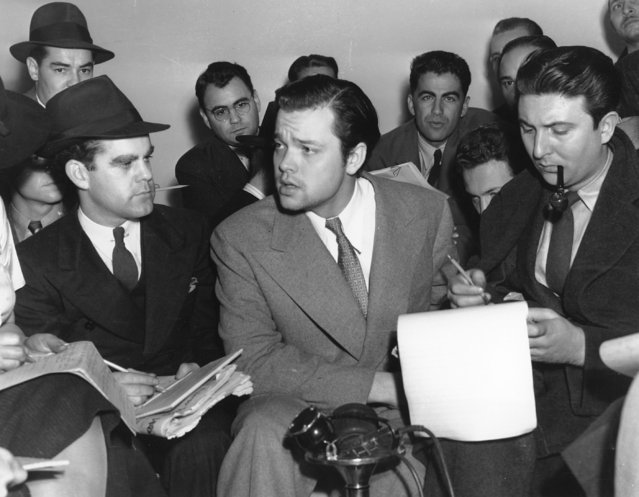 Orson Welles, center, explains to reporters on October 31, 1938 his radio dramatization of H.G. Wells' “War of the Worlds”. Meanwhile, Columbia Broadcasting System made public the transcript of the dramatization, which was aired the night of Oct. 30 and caused thousands of listeners to panic because of the realistic broadcast of an imaginative invasion of men and machines from Mars. (Photo by AP Photo) 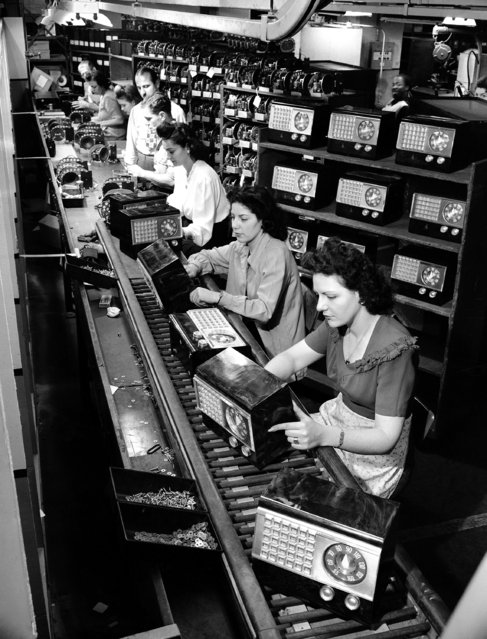 Thousands of new Emerson radio sets are being made available to a public which was unable to purchase new sets during the War. By the first of the year, Emerson expects to produce 3,000,000 sets annually. Here is action on the production line in New York on October 31, 1945. (Photo by Carl Nesensohn/AP Photo) 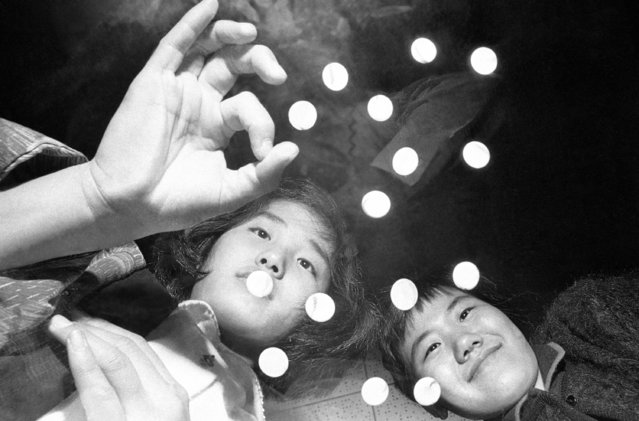 For an unusual view of two girls playing a game of ohajiki in Tokyo on December 8, 1965. The game is played with plastic discs, which are reneuvered against one another much as marbles are done in the American game. Considered an indoor game, ohajiki usually is played on the mats which cover the floors of Japanese homes. (Photo by AP Photo) 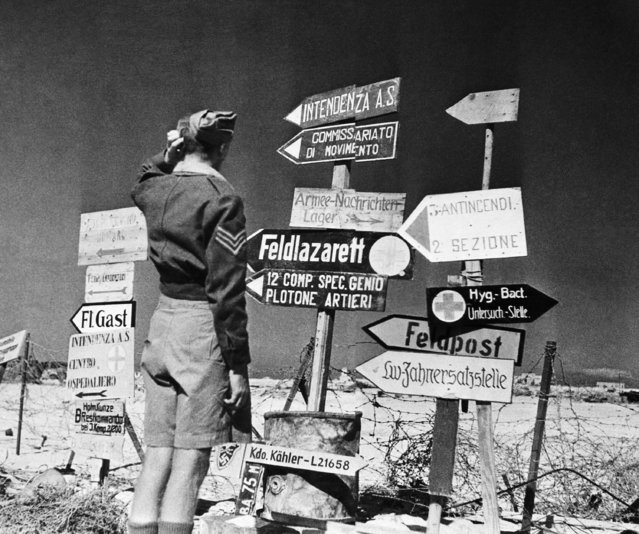 A British Soldier, following up the tanks, is somewhat perplexed by the multiplicity of German and Italian signs at the entrance to Mersa Matruh, December 8, 1942. (Photo by AP Photo) 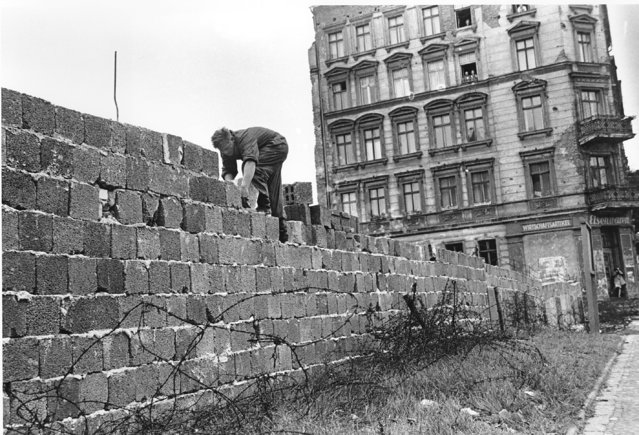 An East Berlin policeman puts bricks in place as the Berlin Wall is heightened to 15 feet, 5 m, separating East and West Berlin, Germany, on September 9, 1961. People watch from their apartment building windows in background above. (Photo by AP Photo) 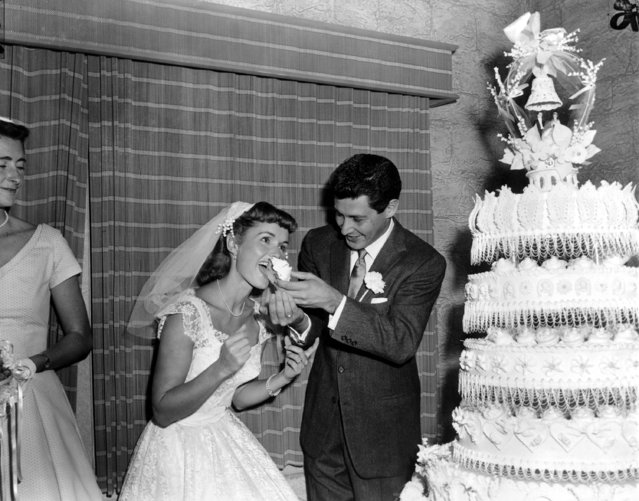