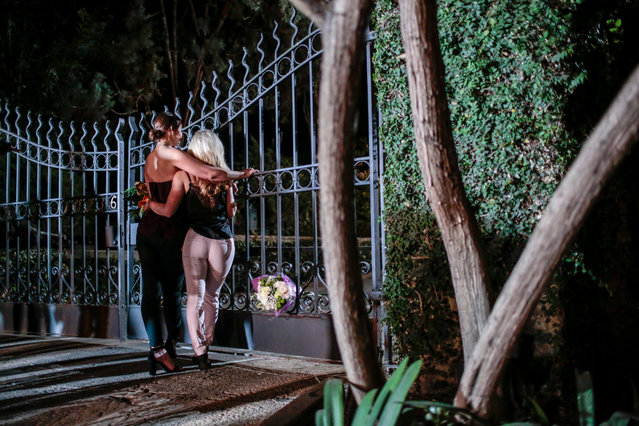 Fans gather at the gate of the Playboy Mansion in Los Angeles, California, U.S., September 27, 2017. Playboy founder Hugh Hefner, who helped usher in the 1960s sexual revolution with his groundbreaking men's magazine and built a business empire around his libertine lifestyle, died on Wednesday at the age of 91, Playboy Enterprises said. (Photo by Kyle Grillot/Reuters) 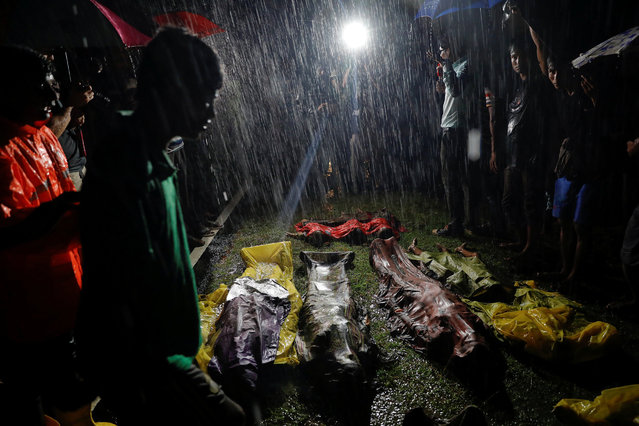 People gather under heavy rain around bodies of Rohingya refugees after their boat with passengers fleeing from Myanmar capsized off the Inani beach near Cox's Bazar, Bangladesh September 28, 2017. (Photo by Damir Sagolj/Reuters) 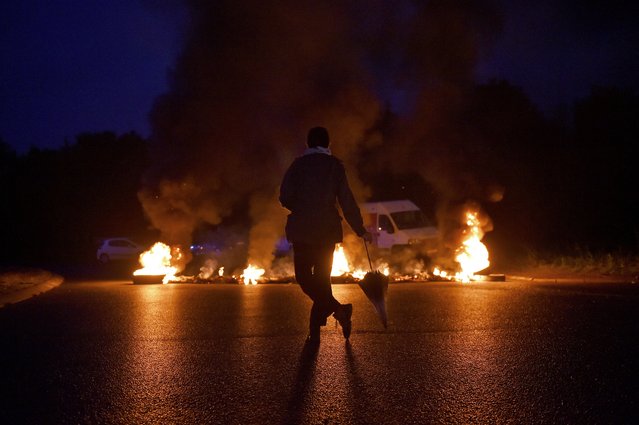 A protestor looks at a fire displayed on a traffic circle as union trade members block trucks on September 25, 2017 in Donges, western France, to protest against the government's labour law. (Photo by Loic Venance/AFP Photo) 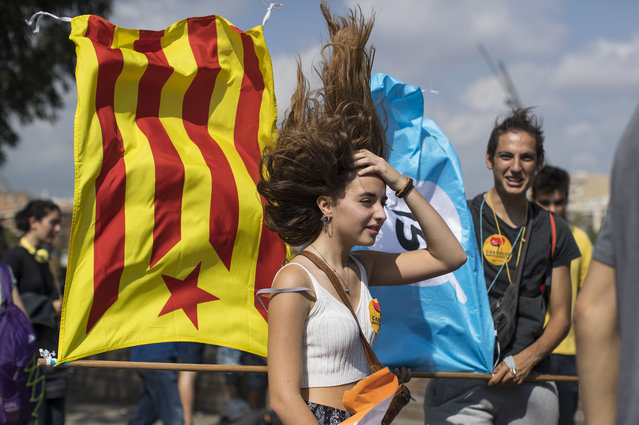 Students wave pro-independence flags while standing over an air vent as they demonstrate against the position of the Spanish government to ban the Self-determination referendum of Catalonia during a university students strike on September 28, 2017 in Barcelona, Spain. The Catalan goverment is keeping with its plan to hold a referendum, due to take place on October 1, which has been deemed illegal by the Spanish government in Madrid. (Photo by Dan Kitwood/Getty Images) 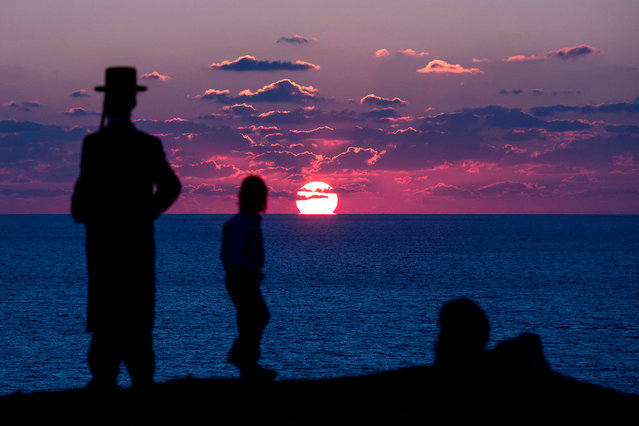 Ultra- Orthodox Jewish men pray along the Mediterranean Sea in the Israeli city of Herzliya, near Tel Aviv, while performing the “Tashlich” ritual on September 28, 2017, during which “sins are cast into the water to the fish”. The “Tashlich” ritual is performed before the Day of Atonement, or Yom Kippur, the most important day in the Jewish calendar, which in 2017 starts at sunset on September 29. (Photo by Jack Guez/AFP Photo) 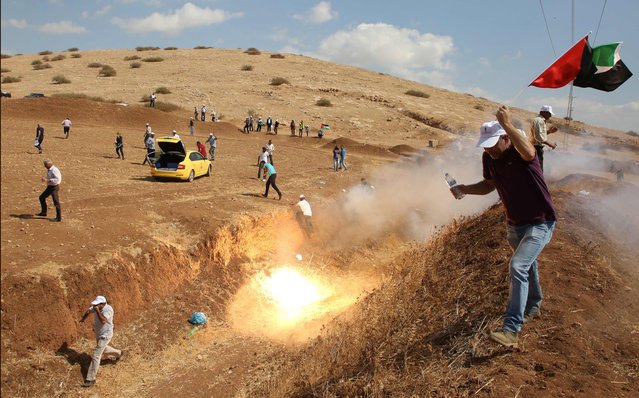 Palestinian demonstrators clash with Israeli security forces following a protest against the expropriation of Palestinian land in the village of Tamun, near Nablus, in the Israeli occupied West Bank, on September 27, 2017. (Photo by Jaafar Ashtiyeh/AFP Photo) 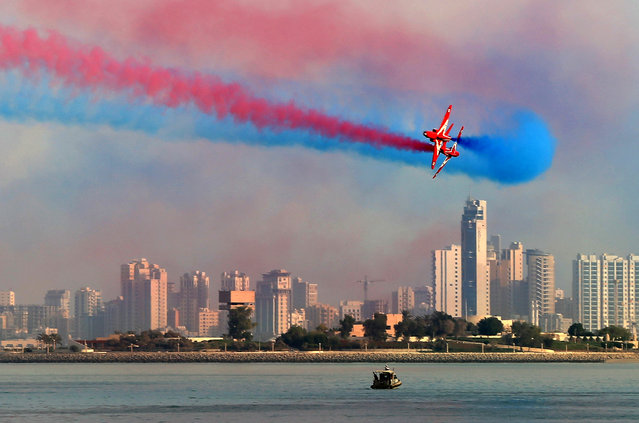 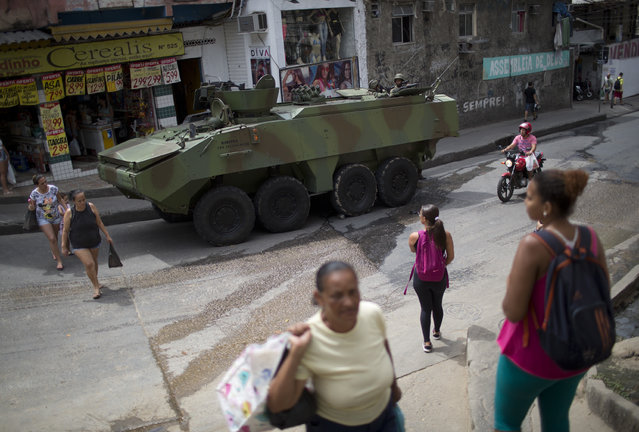 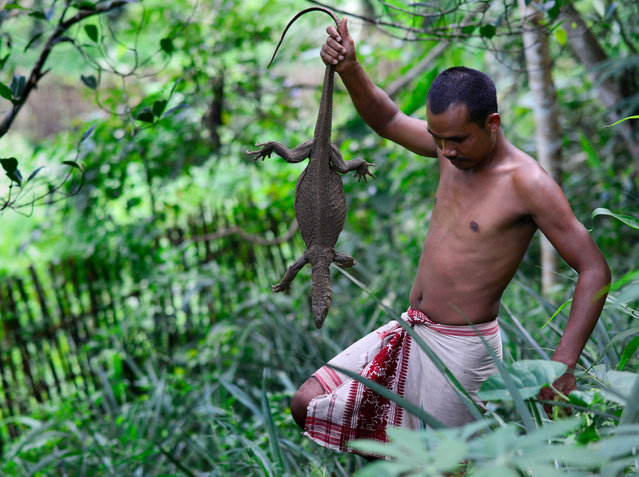 A Tiwa hunter carries a Monitor Lizard, which he caught by using traps in West Karbi Anglong district of Assam state, India, 27 September 2017. During this time of the season, Tiwa tribesmen use different types of indigenously made traps in the hills for catching animals. During the main hunting season (which starts from October and last till March), tribal villagers generally hunt deer, pig, wild goat and different wild birds. (Photo by EPA/EFE/Stringer) 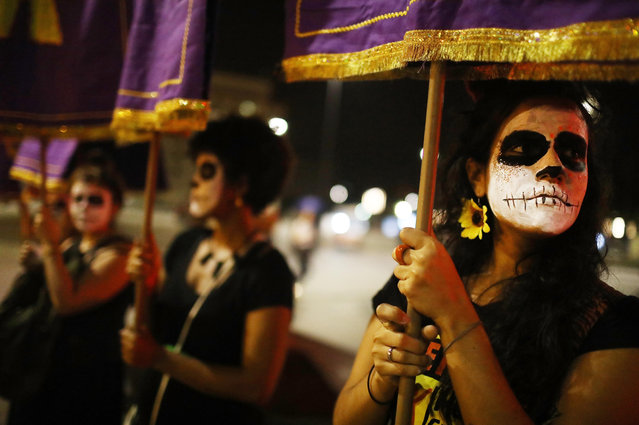 Women's activists march for pro-choice rights past street art displayed on a wall on September 28, 2017 in Rio de Janeiro, Brazil. Brazilian law currently only allows abortion in cases of rape, incest, or dire health threats endangering the life of the mother. A new U.N. study shows only one in four abortions are safe in Latin America- which generally has strict abortion laws. (Photo by Mario Tama/Getty Images) 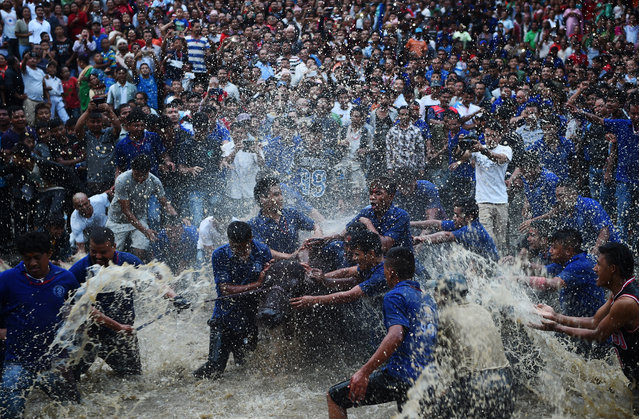 Nepali Hindu devotees splash water on a buffalo set to be sacrificed during the Hindu Dashain Festival in Bhaktapur, on the outskirts of Kathmandu, on September 29, 2017.brates the triumph of good over evil. Dashain is the longest and the most auspicious festival in the Nepalese calendar and celebrates the triumph of good over evil. (Photo by Prakash Mathema/AFP Photo)

A child play on the arms of a little giant puppet before parading through the spectators during the “The Saga of the Giants” street theatre, in Geneva, Switzerland, 29 September 2017. The giants of the Royal de Luxe Company guest in Geneva on the theme “The Knight of the Lost Time” from 29 September to 01 October 2017. (Photo by Martial Trezzini/EPA/EFE) 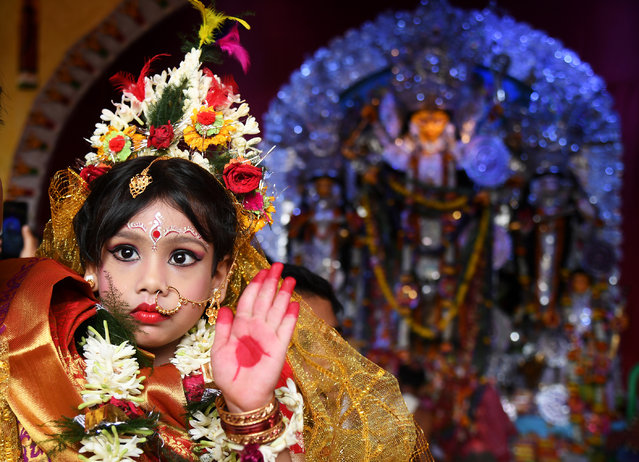 An Indian priest worships six-year-old Hindu girl Anushka Chetterjee dressed as the Hindu goddess Durga at a “pandal” for the celebrations of the “Durga Puja” festival in Kolkata on September 28, 2017. The five-day Durga Puja festival, which commemorates the slaying of the demon king Mahishasur by the goddess Durga, marks the triumph of good over evil. (Photo by Dibyangshu Sarkar/AFP Photo) 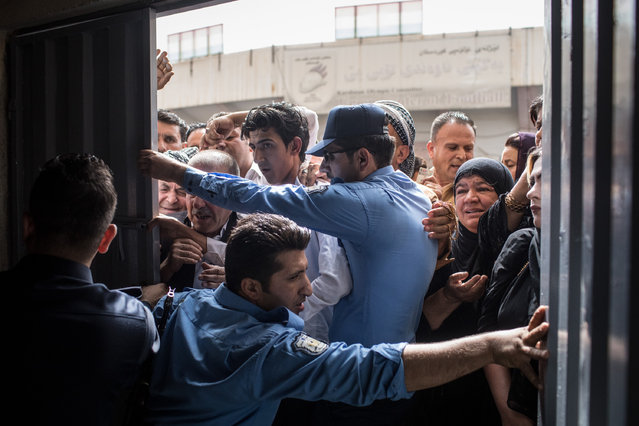 Police and security staff try to keep people from forcing their way into a voting station on September 25, 2017 in Erbil, Iraq. Despite strong objection from neighboring countries and the Iraqi government, some five million Kurds took to the polls today across three provinces in the historic independence referendum. (Photo by Chris McGrath/Getty Images) 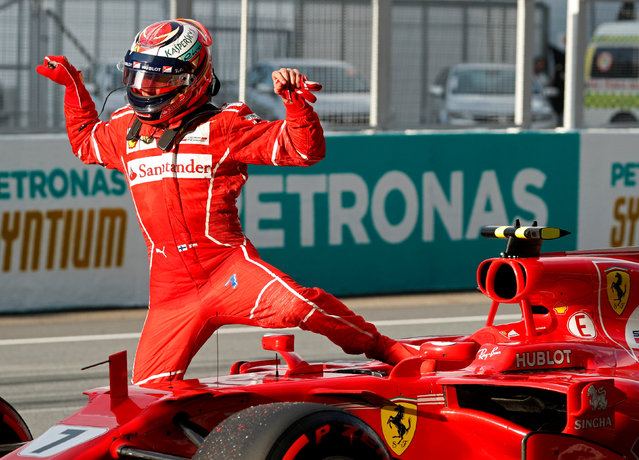 Ferrari driver Kimi Raikkonen of Finland steps out from his car after the qualifying for the Malaysian Formula One Grand Prix in Sepang, Malaysia, Saturday, September 30, 2017. (Photo by Edgar Su/Reuters) 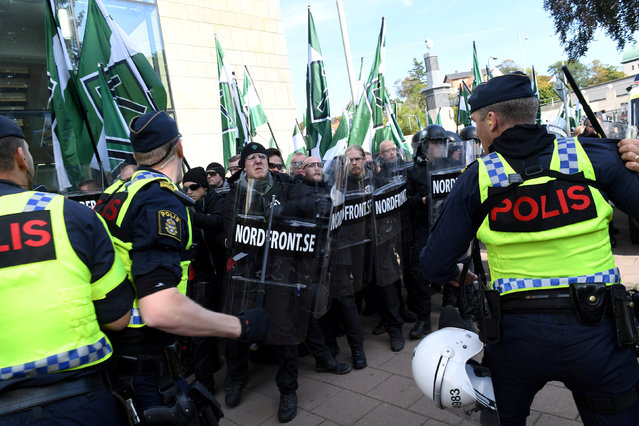 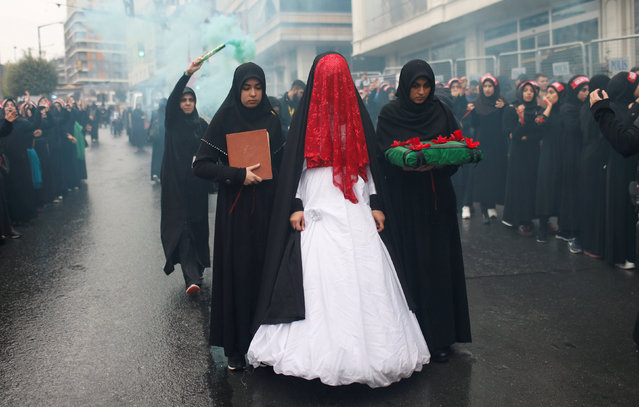 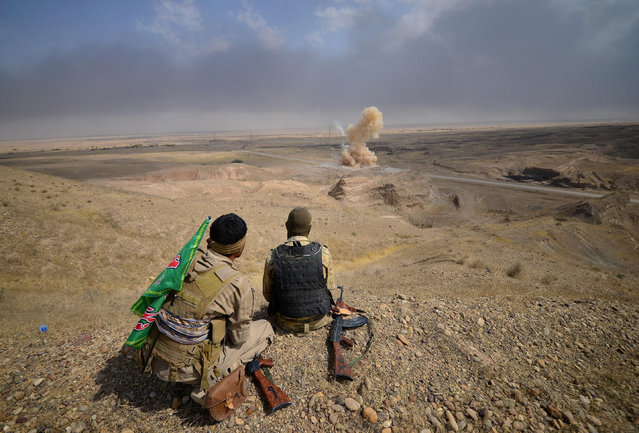 A Shi'ite Popular Mobilization Forces (PMF) and Iraqi army members look at the smoke from clashes outside of Hawija, Iraq, September 30, 2017. (Photo by Reuters/Stringer) 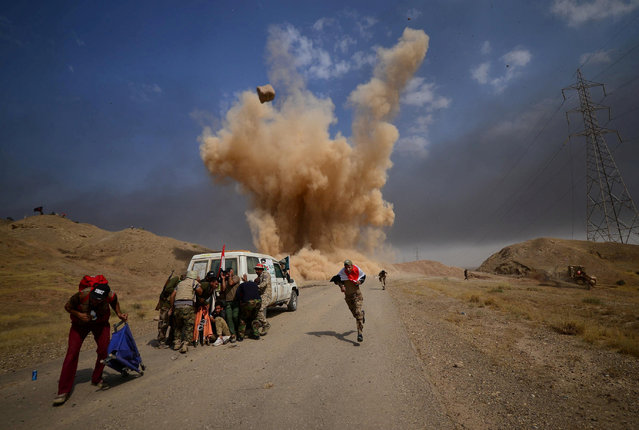 Shi'ite Popular Mobilization Forces (PMF) run and cover themselves from a bomb attack in outside of Hawija, Iraq, September 30, 2017. (Photo by Reuters/Stringer) 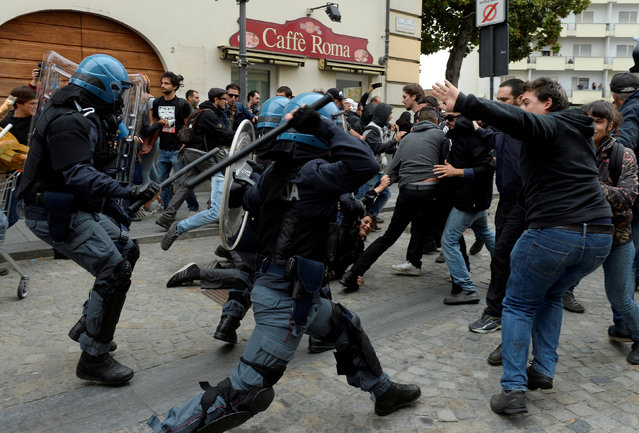 Protesters face police during a demonstration against the G7 summit of Labour Ministers in Turin, Italy September 30, 2017. (Photo by Massimo Pinca/Reuters) 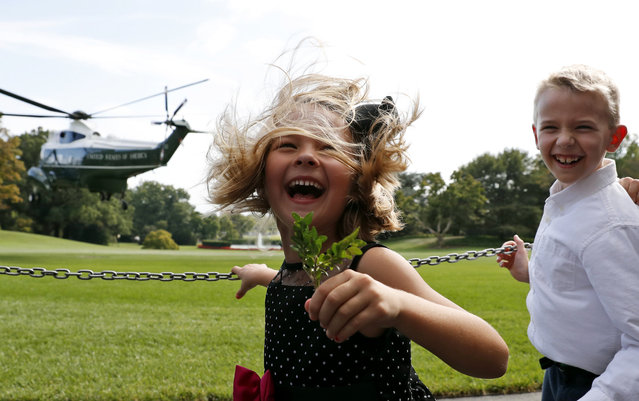 Brooke Fiddes, 5, and her brother Carter Fiddes, 9, both from Charlotte, N.C., react from the rotor wash of Marine One as President Donald Trump departs the South Lawn of the White House, Tuesday, September 26, 2017, in Washington. Trump is headed to New York. (Photo by Alex Brandon/AP Photo) 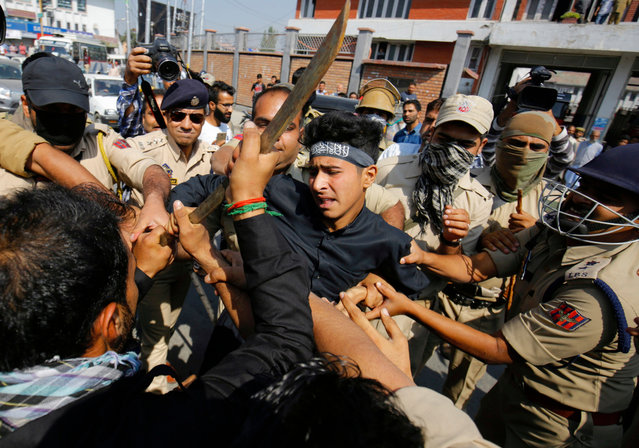 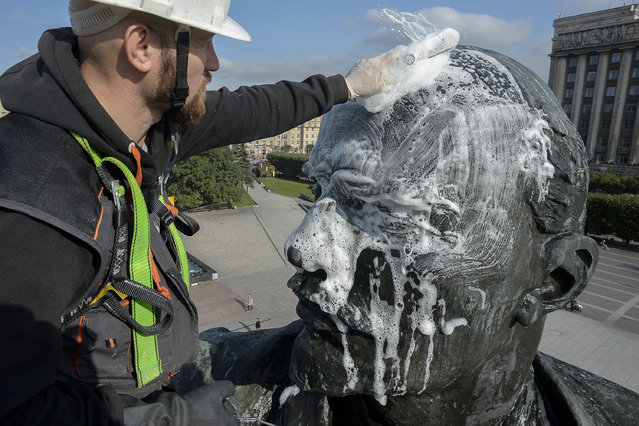 A worker washes a statue of the founder of the Soviet Union Vladimir Lenin at Moscow Square in front of the House of Soviets in Saint Petersburg on September 28, 2017. This year Russia will mark the 100 Anniversary of the Bolshevik Revolution also known as the October Revolution in which Vladimir Lenin's Bolshevik Communist government came to power. (Photo by Olga Maltseva/AFP Photo) 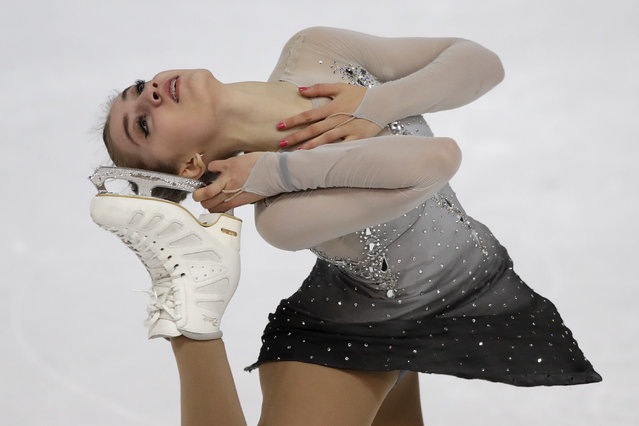 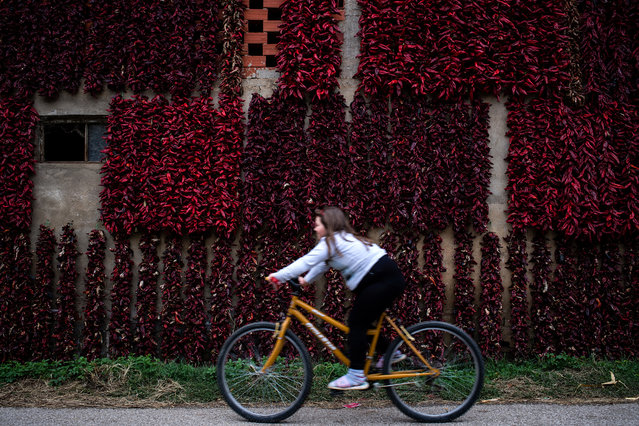 A girls rides her bicycle past threads of red paprika in the village of Donja Lokosnica, near the city of Leskovac, Southern Serbia, on September 25, 2017. Donja Lokosnica is the Serbian “capital of paprika”, since almost all of the 1300 inhabitants are involved in growing paprika. As autumn approaches, the whole village turns red, because of the many threads of dried peppers that hang around Lokosnica, waiting for their winter use. Each of these paprika threads is handmade, still dried according to traditional techniques, assisted solely by the sun and fresh air. (Photo by Andrej Isakovic/AFP Photo) 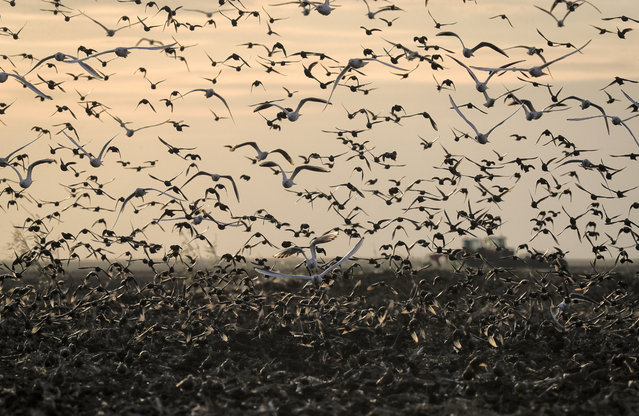 In this, Thursday, September 28, 2017, photo starlings and gulls fly above agricultural areas as tractors plough the land near Mizil, Romania. (Photo by Vadim Ghirda/AP Photo) 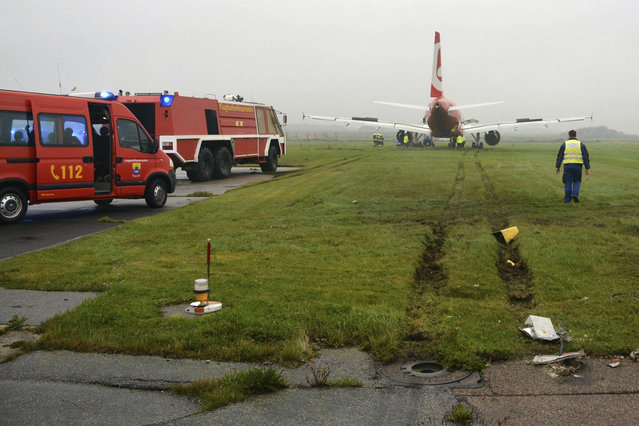 In this picture released by the fire brigade Westerland (Freiwillige Feuerwehr Westerland), an Airbus of Air Berlin stands in a meadow near Westerland on the German North Sea island of Sylt, Saturday, September 30, 2017. German authorities say the plane overshot the end of the runway but nobody was injured in the incident. The regional emergency response center says the Air Berlin plane from Duesseldorf came to halt on grass about 50 meters beyond the end of the runway Saturday. (Photo by Joerg Elias/Freiwillige Feuerwehr Westerland/DPA via AP Photo) 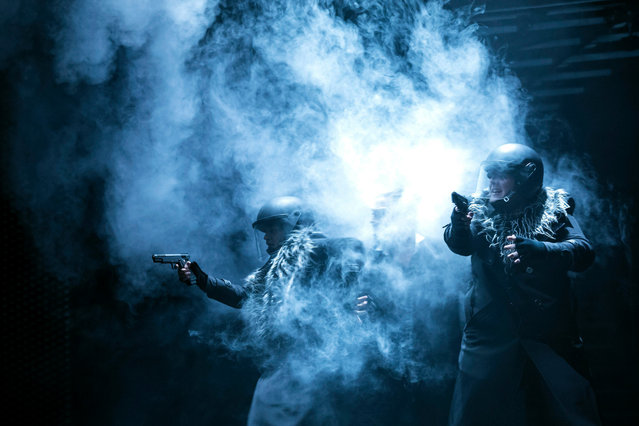